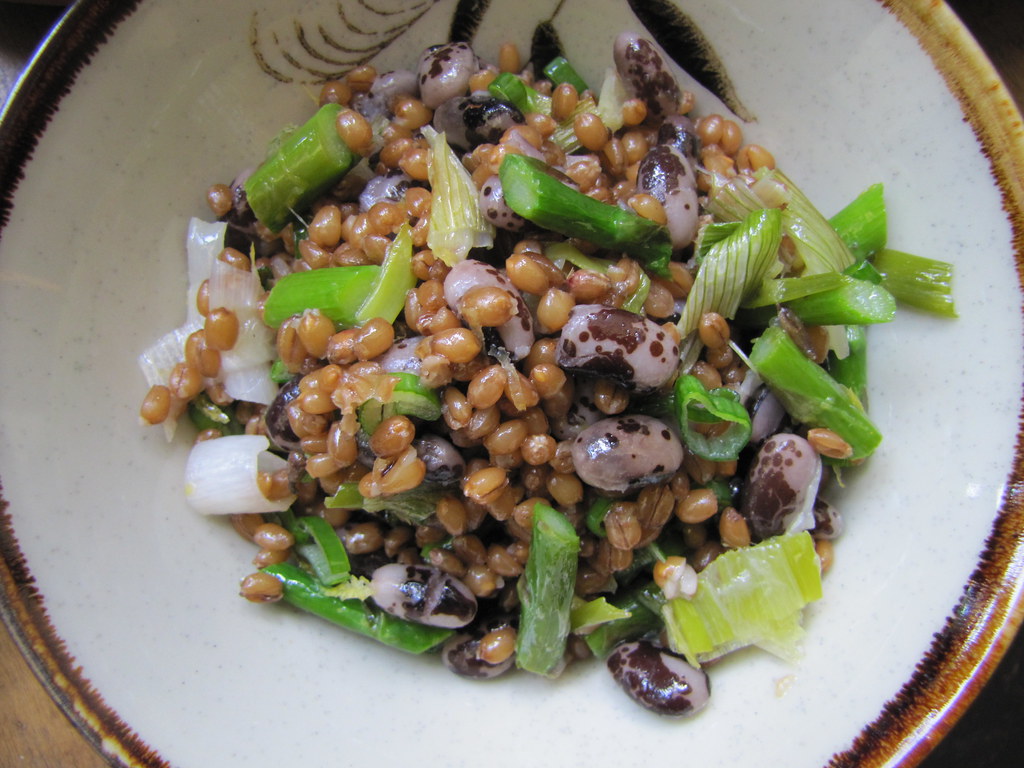 I had a hell of an eating weekend. I spent most of Memorial Day lazing on Prospect Park’s great lawn, soaking in sun and smoke from the hibachi grill that friends had rolled in to char up several chickens and some good, marinated steak. The previous two days were spent celebrating my brother’s commencement in Providence, a family reunion filled with food outings each step of the way. My uncle determined, on our way back, that he was going to go home and make a big pot of rice, boil some soya beans, and have congee with those for the rest of the entire week. This is my version of his recipe for back-to-basics healthfulness.


The roasting part came as a last-minute save; I came home to discover that most of the vegetables I’d bought at the farmers’ market Saturday morning had frozen in my refrigerator. So instead of chopping the soggy spring onions and thin stalks of asparagus, I drizzled them with olive oil and sea salt and scorched them in the oven for a bit. I think this gave the salad a certain savoriness that was not unwelcome in the least. 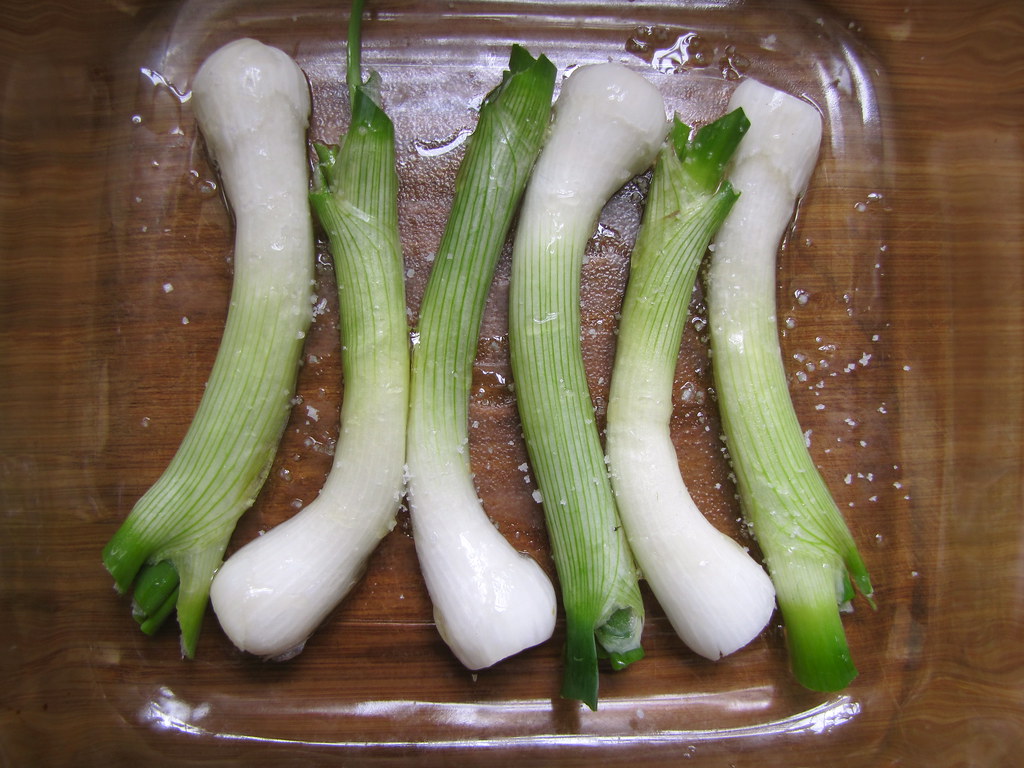 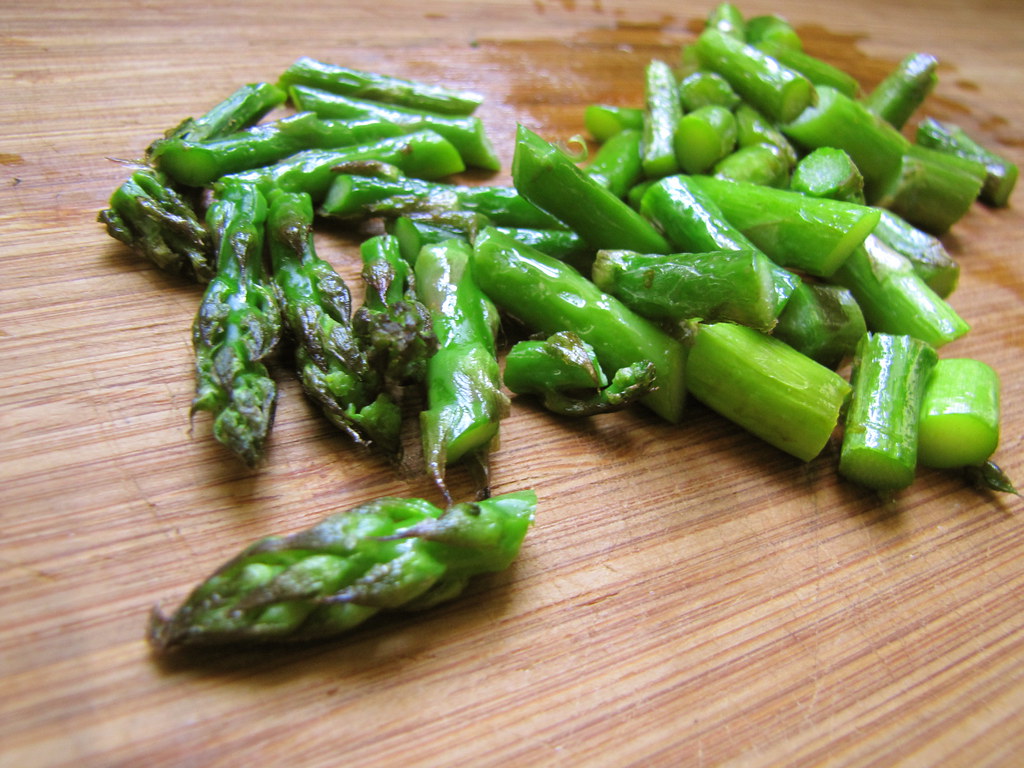 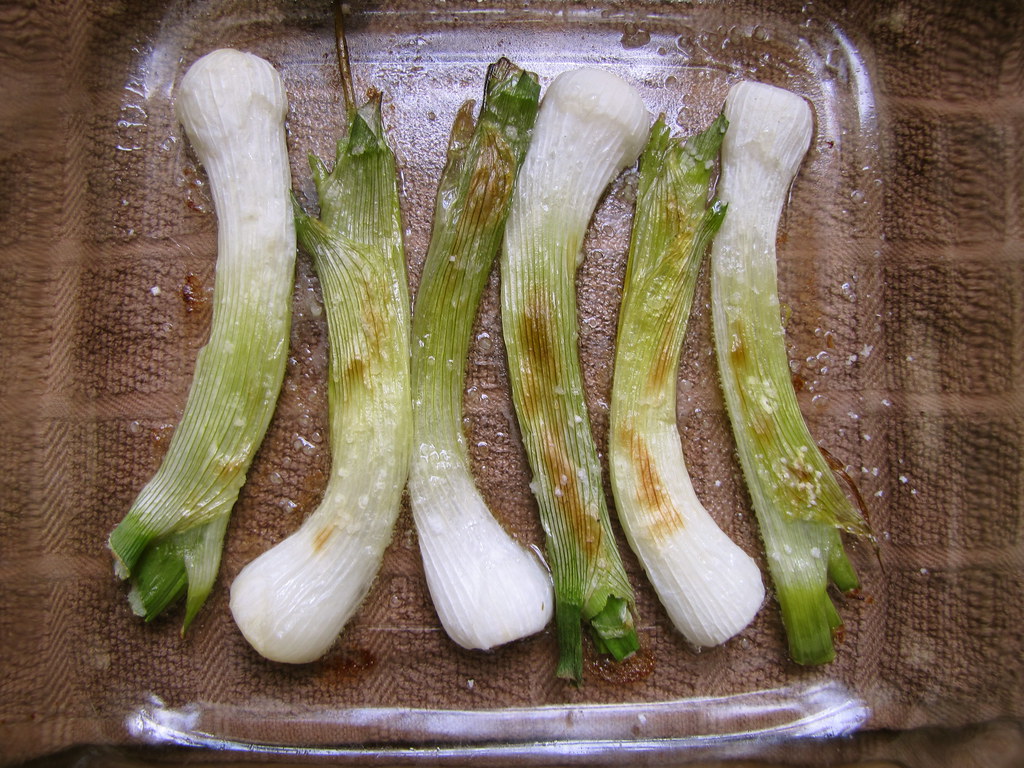 out of the oven, slightly browned and super-sweet

While at the farmers’ market, I couldn’t help but pick up a pack of becoming black-and-white spotted beans called “orcas” at Cayuga Organics’ stand. These were about the same size as black beans, and took as much time as them to soak up water and cook — which is fairly small and quick, as far as dry beans go. But buying them from this Finger Lakes distributor often assumes a shorter cooking time, because the beans are often fresher than dry beans found in supermarkets. Trust me, it’s happened every time I’ve cooked with any of their beans. 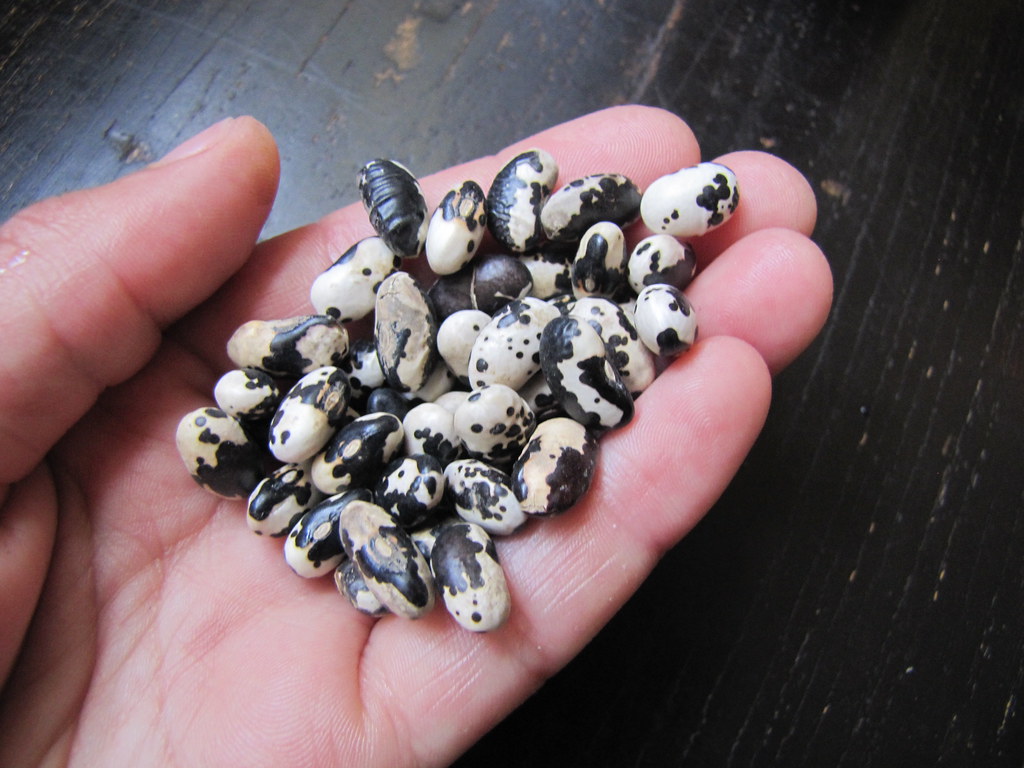 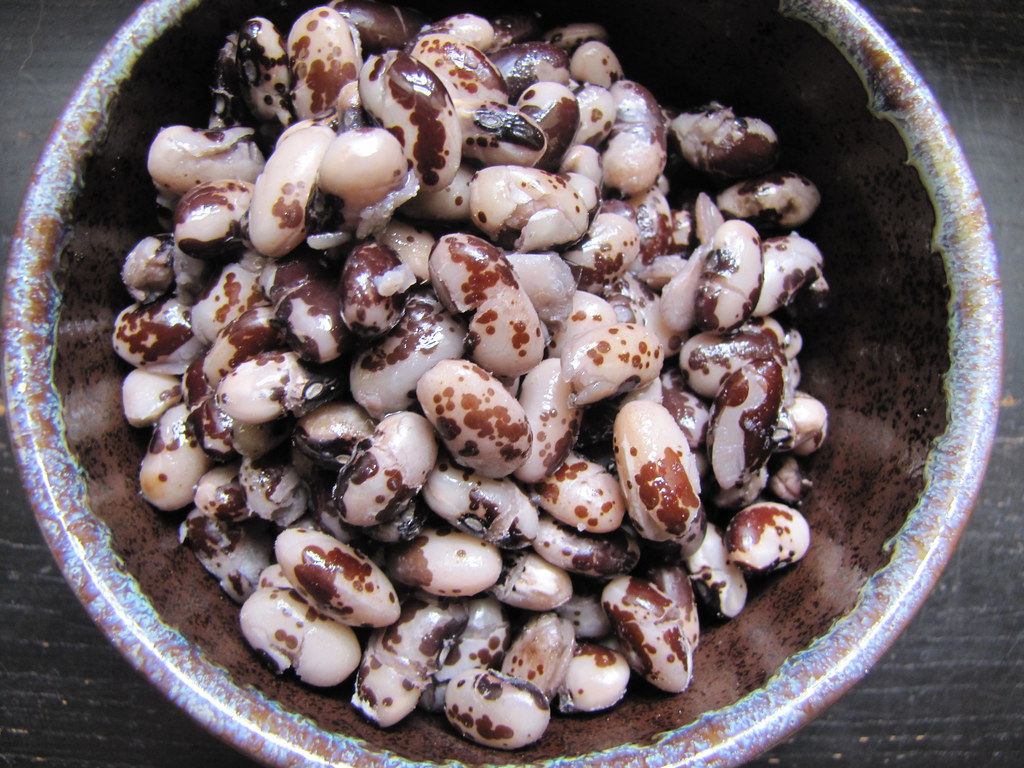 I also slipped some wheatberries into my bag from Cayuga Organics. These are the whole wheat kernels, minus the husks, so they’re full of fiber like any whole grain. They can be puffed up like popcorn (does Smacks cereal ring a bell?), or ground into smaller pieces for porridge or texture in breads, or milled even finer for whole grain flour. Or, boiled until chewy-tender, and tossed into salads such as these. 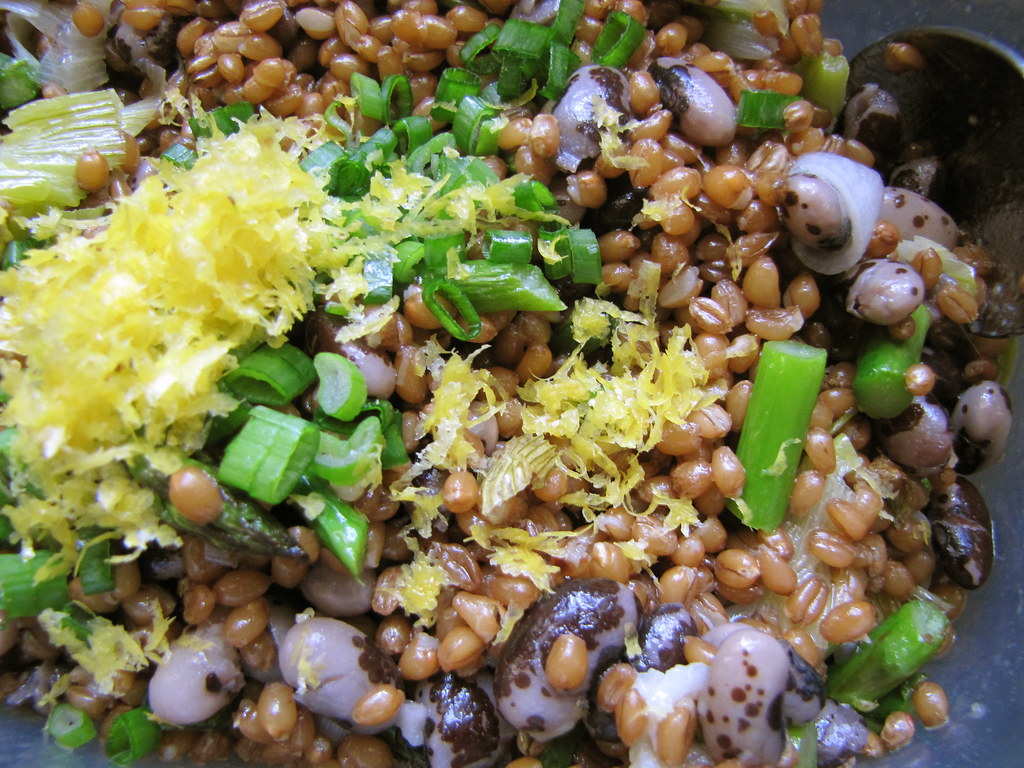 the mixture is tossed with lemon juice and zest

All told, this salad comprises more than enough nutrients to be fitting as a meal in one. With healthy beans for protein, a whole grain to fill you up, spring veggies, and Vitamin C from plenty of fresh lemon juice squeezed in — I grated in some zest, too, just because — what else could you need? Well, as it turns out, this salad also makes a great side for burgers, if truth be told. No matter, my uncle’s probably gorging on ice cream right about now.

Soak the beans overnight in at least three inches of water to cover. Drain and cover with 1-2 inches of fresh water and bring to a boil. Reduce heat and simmer until tender (usually around one hour). Drain and cool.

Cook the wheatberries by covering with 1 inch of water in a pot. Bring to a boil; reduce heat to a simmer and cook, stirring occasionally, until water has evaporated and wheatberries are chewy, with some of the kernels just starting to pop open. Add more water along the way if necessary. Let cool.

Preheat oven to 400 degrees. Set aside the green shoots of the spring onions and split the white and light green ends in half lengthwise. Place cut side-down on a roasting tray and drizzle with olive oil and salt. Roast at 400 degrees for five minutes; reduce heat to 350 degrees and roast for another 5-10 minutes, or until lightly browned. Remove and let cool.

Trim the tough ends from the asparagus and toss in olive oil and sea salt on a roasting tray. Roast at 400 degrees about 5 minutes (depending on the thickness of the asparagus). Remove and let cool. Chop into about 1/2″ pieces.

Chop the crisp, green parts of the spring onions. Toss all the ingredients together in a large bowl and season with salt and pepper to taste. Serve immediately or cover and refrigerate for up to 3 days or so.

Two brownie points: This recipe comes very close to being perfect, in my book, but I’ve added a couple points due to the fact that the vegetables were roasted, rather than fresh. This gives it some great flavor while it adds extra sugars. But, spring is sweet — literally, with all the sweet peas and delicate onions and such. Can’t hurt too much to turn it all up a notch.

Nine maple leaves: If you’re looking to reduce your carbon footprint, think healthy beans and whole grains, all the way. Not only will you get your vitamins for the day, but you’ll do so in a way that is an incredibly low cost to the environment (beans actually fix nitrogen into soil rather than deplete it), and is under-utilized, in this country at least. And, might I mention, cheap.