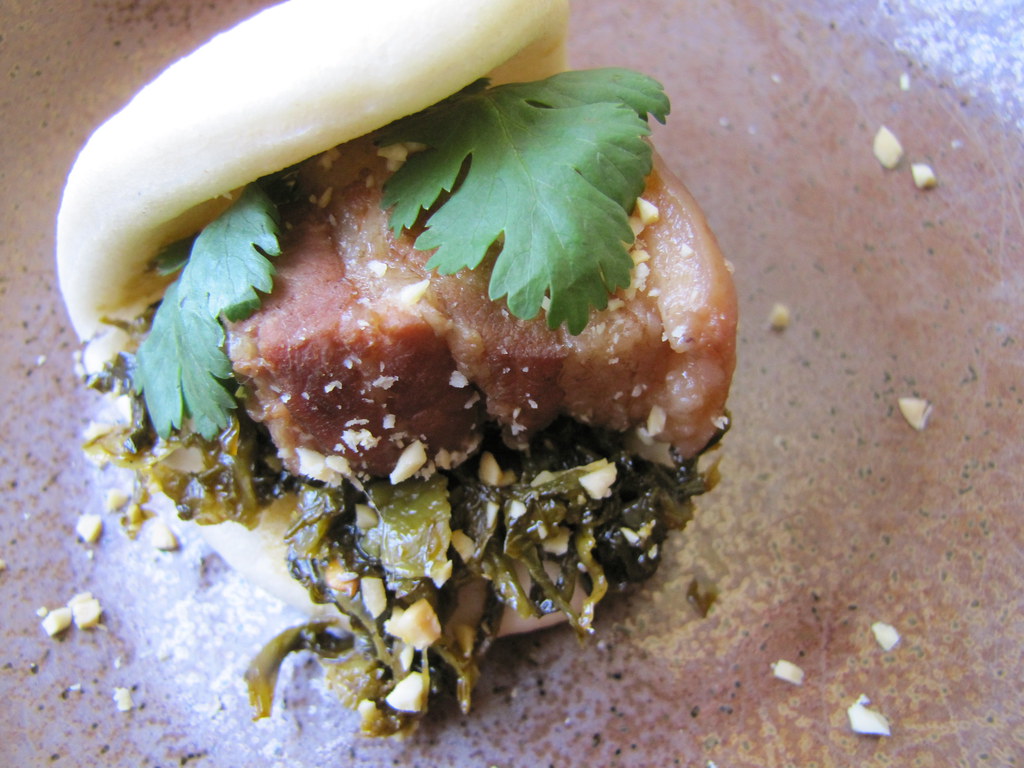 Stop. I know what you’re thinking. It’s one of three things: What in the world is this funny lump of meat stuffed inside a strange, puffy bun? Or, You just copied the pork buns made famous by Momofuku Noodle Bar, and put cilantro and peanuts on top! Or finally, Hao che! You just made Taiwanese gua bao at home! Good for you.


So, there’s a lot to say about this lump of meat pressed between a fluffy steamed sandwich bun. For the record, it has been made famous here in recent years, too, by another restaurant in New York’s Lower East Side — Baohaus — led by another boisterous, enterprising chef — Eddie Huang. But unlike the pork bun that became all the foodies’ rage at David Chang’s Momofuku restaurant group, this version has toppings that are signature to the way they’re made in Taiwan. Instead of pork belly smeared in hoisin sauce, it has pork belly braised in five spice, hongxiao broth. Instead of pickled cucumber slices, it has a bed of shredded pickled mustard greens, fresh cilantro, and a spray of crushed peanuts.

The common factor is the steamed sandwich bun. A modern variation of age-old steamed buns that are closed shut, with the fillings inside, the floppy sandwich bun is steamed as is, then filled after it’s fully cooked and hot. 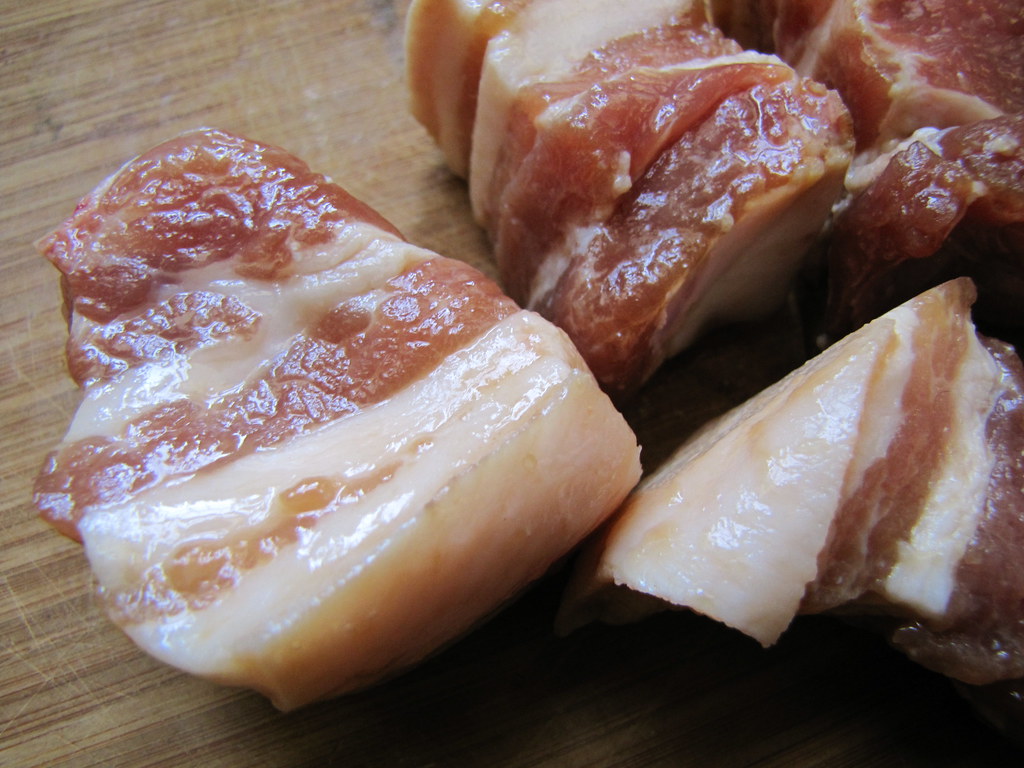 thick, blubbery hunks of pork belly = party in your mouth!

And I have not met anyone who didn’t fall in love with this type of bun, no matter what was inside. To date, I’ve made duck buns with them for a Hapa Kitchen dinner, “BLT” buns with them when Jersey tomatoes were ripe and colorful, and steamed them from fresh, homemade dough on an improvised, outdoor grill-turned steamer to stuff with homemade char sui and sauerkraut at last summer’s Meatopia on Governor’s Island. 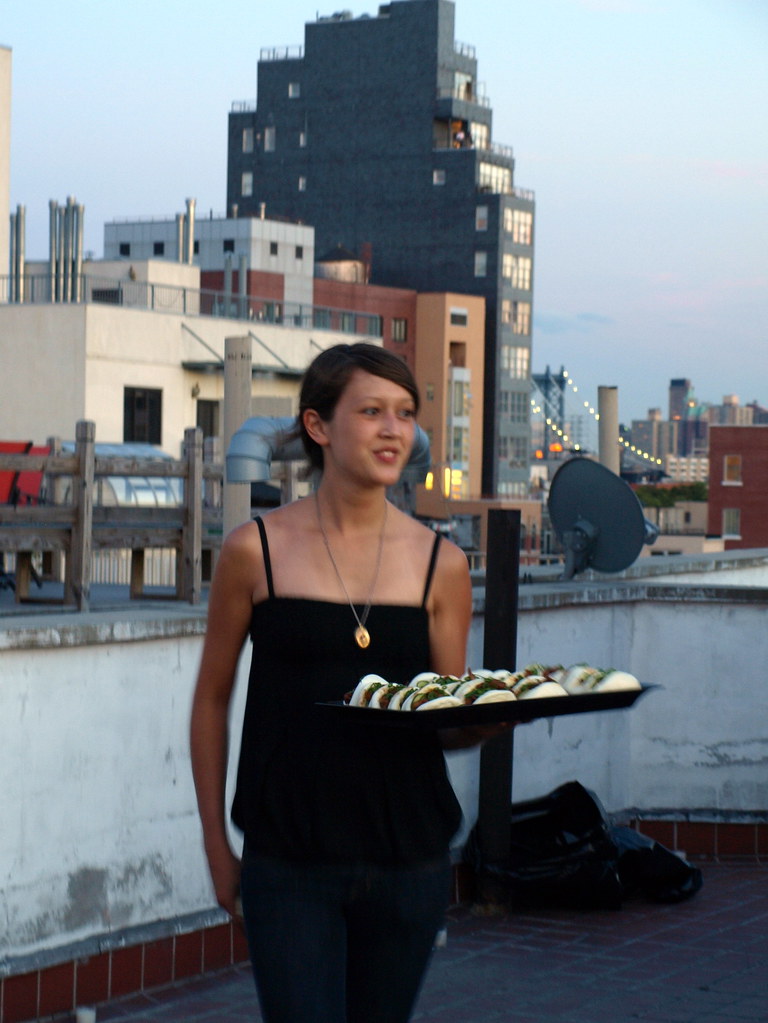 me with some sort of buns (photo by Nora)

But this one may have the best fillings I’ve found for them yet. I brought them to a potluck and watched them get grabbed up in minutes. The generous slab of pork belly, cooked until it falls apart once it touches your teeth, is the highlight of these buns. But the spicy pickled mustard greens are a pungent, salty complement, and I like to stuff as much in as will stay. There’s no sauce here, as the pork belly should have plenty of flavor from its braise, and the thick layers of blubber in the meat add a gelatinous contrast in themselves. 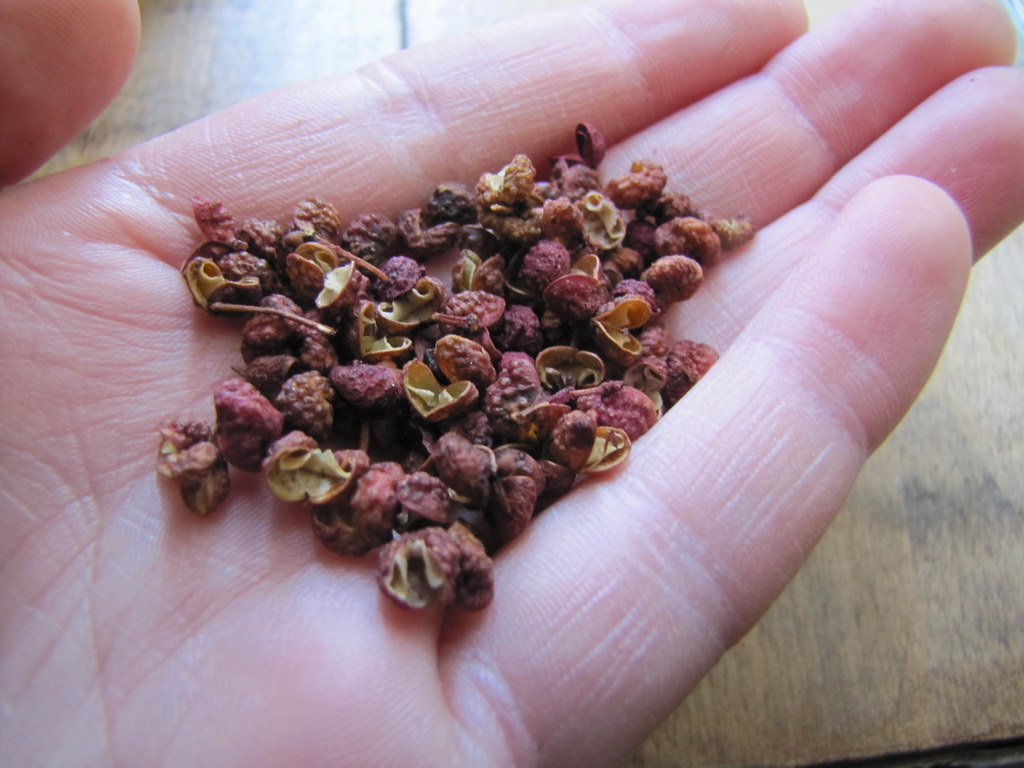 Szechuan peppercorns are one component of the flavorful braise 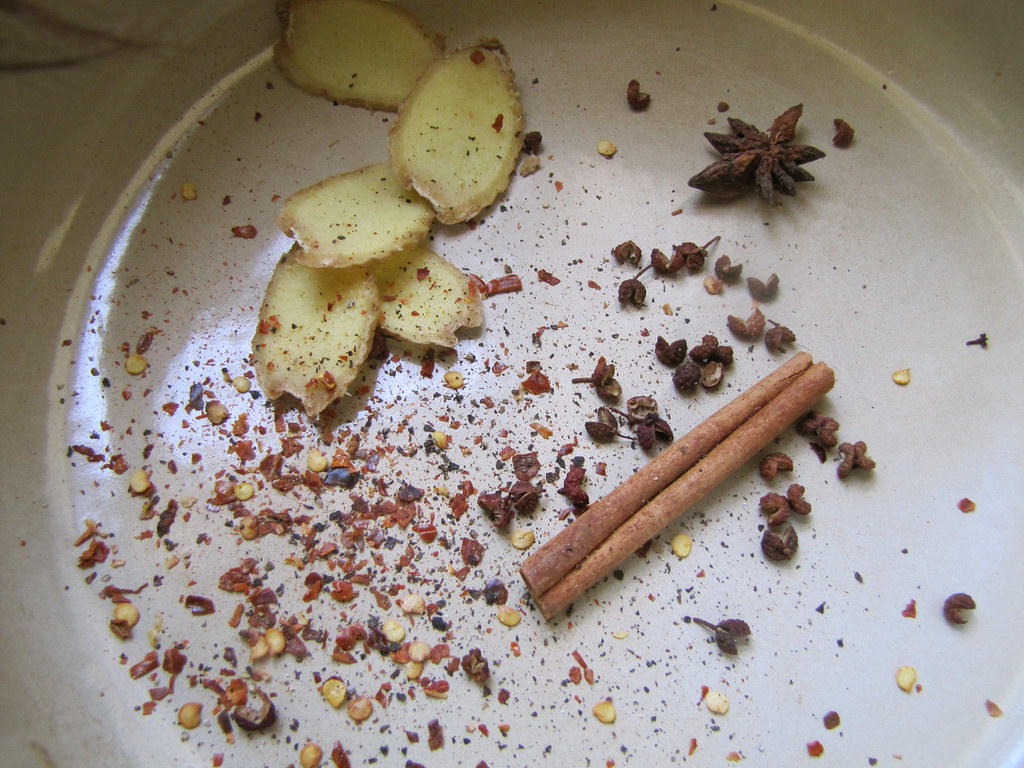 I’ve seen these buns often translated as a “Taiwanese hamburger” and though a chunk of pork belly has nothing in common with a ground beef patty in my mind, it kind of makes me want to stick a ground beef patty with ketchup and mustard in one sometime… Then again, I can’t see why peanut butter and jelly wouldn’t taste good in one of these buns, too.

We’ll see! In the meantime, savor this traditional Taiwanese-style pork bun recipe. If you can’t find the pickled mustard greens in the condiment aisle at an Asian grocery (long shot), you can always try your hand at pickling some greens a la this recipe, too.

Cut pork belly into 1-inch pieces along its length, keeping the skin and fat on. Rub pieces with generous pinches of salt, a little white pepper, and the sesame oil. Heat up a heavy-bottomed pot or Dutch oven and add the vegetable oil. Brown the meat cubes on each side until just lightly seared. (This will help them to keep their shape better while braising.) Remove with tongs and set aside.

In the same pan, add the ginger, garlic and scallions and another splash of oil, if necessary. Cook until just fragrant. Add the Szechuan peppercorns, five-star anise, cinnamon stick and the rice wine and bring to a boil. Add the soy sauce and sugar and stir until dissolved. Return the pork pieces to the pot and fill with just enough water to cover. Let simmer, covered for at least one hour, but preferably two, turning them every so often. Remove the lid for the last half hour or so of the cooking time so that the braising liquid cooks down to almost nothing.

Steam buns according to the directions on the package. Add a spoonful of mustard greens on the bottom, place a piece of pork belly on top, and top that with sprigs of fresh cilantro and a dusting of crushed peanuts. Serve immediately.

Eight brownie points: This snack is definitely over-the-top in terms of fat and cholesterol, but it’s that way in flavor, too. You should be well sated by just one sandwich, it’s so tasty and decadent. That’s why they’re great to serve as part of a spread of party snacks, so you can just bite here and there and not have to sit down for a full meal. There’s not too much to say nutrition-wise about these buns, but the pickled mustard greens are just that, densely-packed nutritious greens, and a little fresh cilantro never hurt to help out that cause, either.

Two brownie points: Pretty atrocious, but it can be done in a much more sustainable manner. Pork belly is just one of those cuts that hasn’t quite become very readily available to the average consumer. Local farms like Flying Pigs farm, or Tamarack Hollow, will have it at the Greenmarket, but not every time, guaranteed. And if you’re looking at the meat aisles of conventional supermarkets, it’s even more rarely found. Bottom line, plan to make this one ahead of time, so you can source the best meat purveyor of your choice. There’s always pork belly to be found at butcher shops in Chinatown, though, which is where I ended up going for these (and most of the other ingredients here).