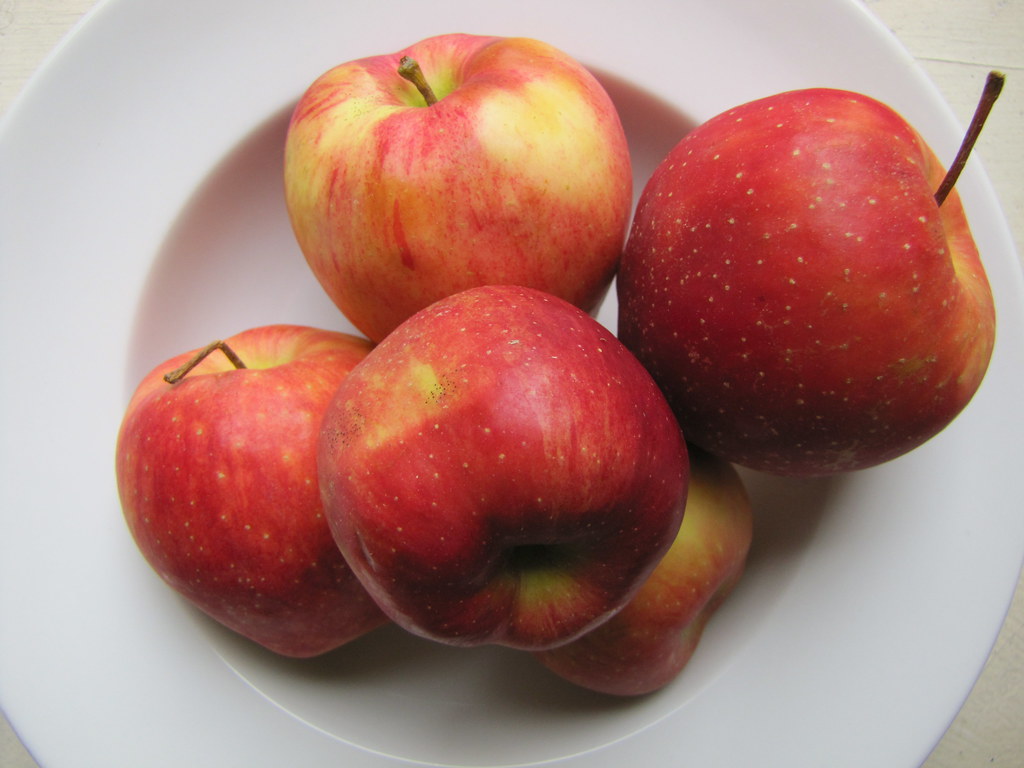 That is the question. It is quite possibly the most perplexing thing about not eating out. We live in a culture that travels a lot — whether it’s just a twenty-minute commute to work each day in a car or perpetually being “between” two coasts, or countries, by plane. I wonder about our wandering if it isn’t the reason why take-out or fast food was created in the first place. Eric Schlosser certainly makes a causality seem logical in his tour of interstate highway development in Fast Food Nation: the more we hit the road, the more we press the brakes on preparing meals ourselves.


For all their convenience, though, I don’t see anyone raving about the great choices of readily available food at roadstop food courts and airports, or least of all, on planes — if they have any food there at all. The relationship we have with airborne and roadside food is entirely made of convenience, for dry, fill-yourself-up functionality rather than taste or nutrition; it’s often heavy, and processed instead of light and immune-boosting, which is what sitting travelers in confined places could really use. And for some god-awful reason, it’s shockingly expensive, too. I stood beside one man at a coffee shop in Laguardia Airport as he watched the attendant ring up his two bags of potato chips and two bottles of waters. “Ten-fifty,” he scoffed, shaking his head none too politely about the price. “Is that right?” he implored. The attendant made what looked like a sympathetic shrug.

So instead of being a curmudgeonly acquiescent member of the airborne food-buying set, you can make your own meal to bring on the plane, or in the car, or bus or train. Not a revolutionary idea by far, but here’s a convenient factor: a carry-on bag that keeps your food cool and easy to tote. This reusable, insulated, snazzy looking tote has been helping me get through the week eating pretty well. It’s from KOKO by Cosmoda, a line of lunch bags that inconspicuous pass for a fashion accessory, in PVC-free materials. I got it from my brother for Christmas, who found it at a craft fair in Providence. Thanks, bro! 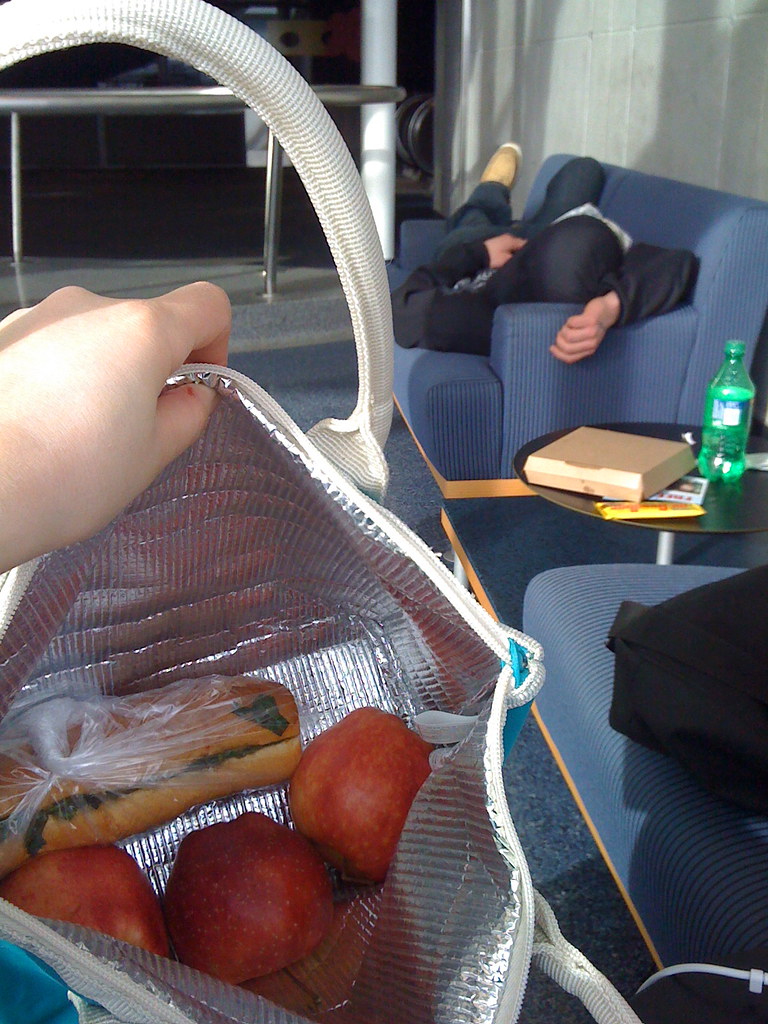 an insulated tote filled with provisions for a day of travel

And what did I pack it with? In a scramble to leave NYC in a blizzard, and just after a book reading the night before, I packed it with leftover things, and dashed out. It took all of ten minutes to make: a leftover half-baguette, unused from making crostini for the reading at WORD bookstore, sliced open. Inside I slicked the last remaining schmears of chevre goat cheese (a sort of more gamey tasting cream cheese), and packed the sandwich with some sauteed beet greens, cooked for a minute in a pan with olive oil, salt and pepper. In fact, all of these ingredients were leftover from the crostinis I served at WORD.

The crostini for the reading had goat cheese, sliced beets and a balsamic reduction drizzle. So the greens were leftover from the bunch, as was the cheese, and the bread, which I’ll admit, I overpurchased by design just so that I’d have something to make an airport sandwich lunch with. The dish of inspiration for that book reading hors d’oeuvre was the first-place audience win from my book launch party a week ago. Trish Tchume and Kim Hendler’s crowd-winning crostini actually had goat cheese, roasted red peppers, peaches and a balsamic reduction sauce. At first, I was considering swapping apples for the stone fruit, which were still in season locally. Then, noticing the bunch of golden and red beets in my crisper, I decided to roast those and slice them in oblong slivers instead of apple, which would travel better pre-sliced. Though I didn’t grab any photos of the finished platters, the glistening golden beets, drizzled with an enamel-like balsamic reduction, actually looked a bit like peach slices. A bastardization from the winners’ original, but still a good party platter filler, either one. Thank you, ladies, for the great inspiration! 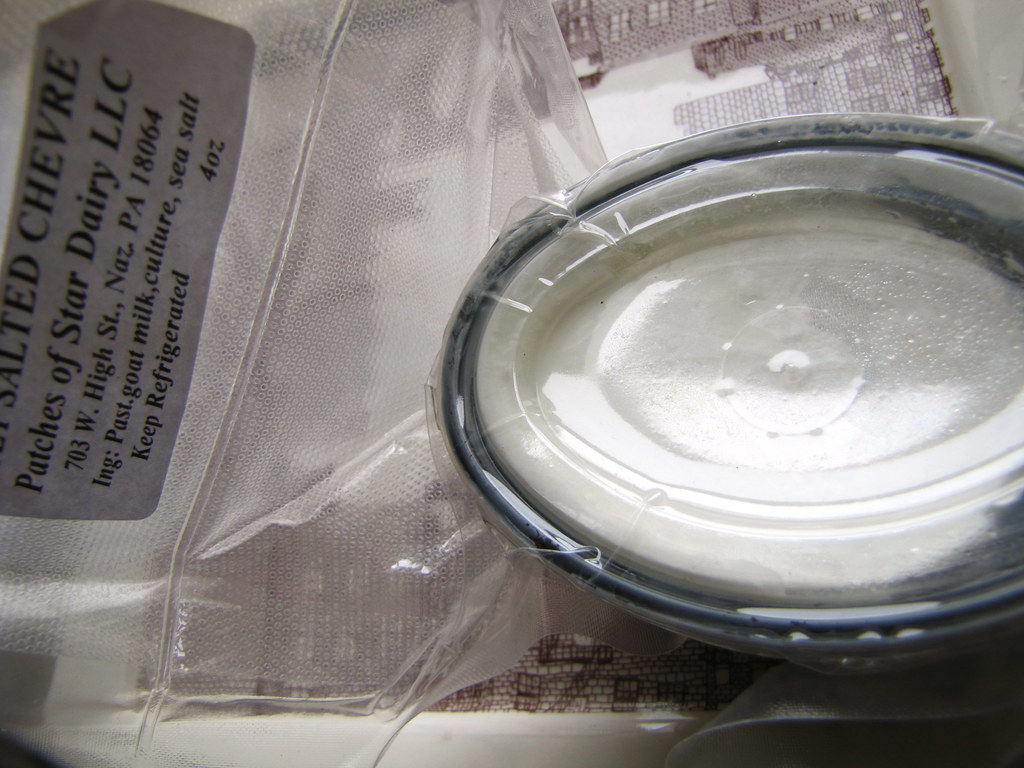 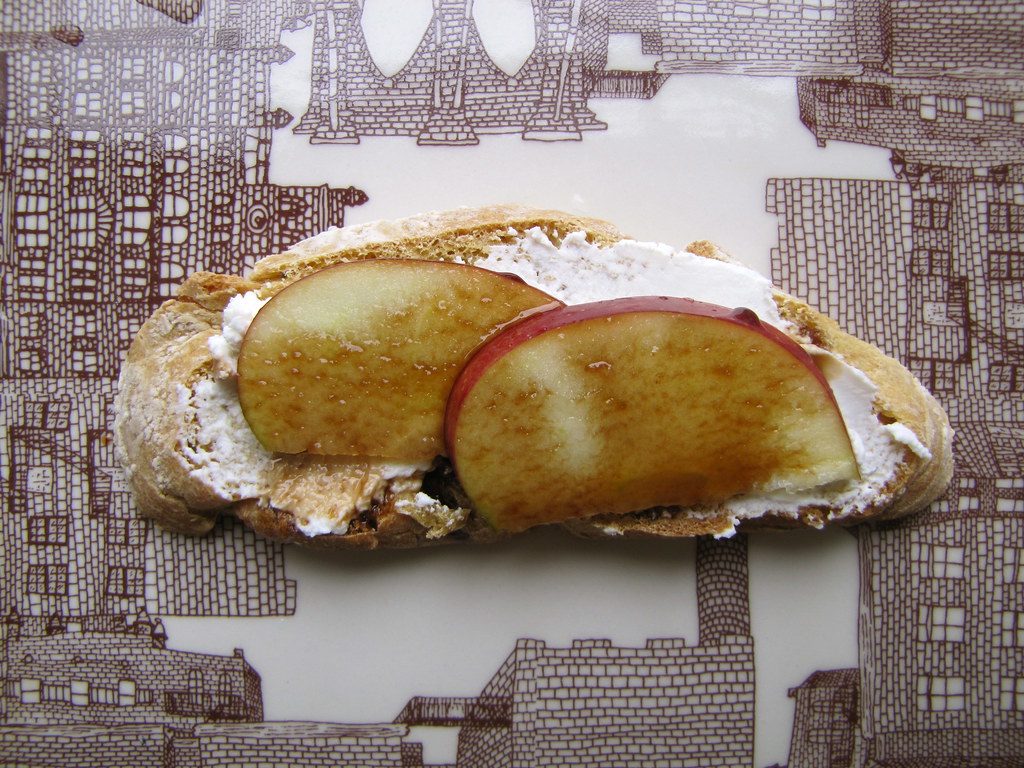 
And where am I going? Why have I left NYC, in the middle of the Week of Eating In, no less? I went to Madison, Wisconsin, in the heart of the dairy state, and so much more happening with food. I’ll be cooking two dinners, one with Glass House Supper Club and the Underground Food Collective, for a Hapa Kitchen-written menu. And on March 1st, a co-chef stint at Slow Food UW Madison‘s Monday night dinner series. How will I navigate this great culinary destination, when I’m not cooking, and trying to stay true to eating in? That’s another question, and I’m not quite sure the answer to it yet.