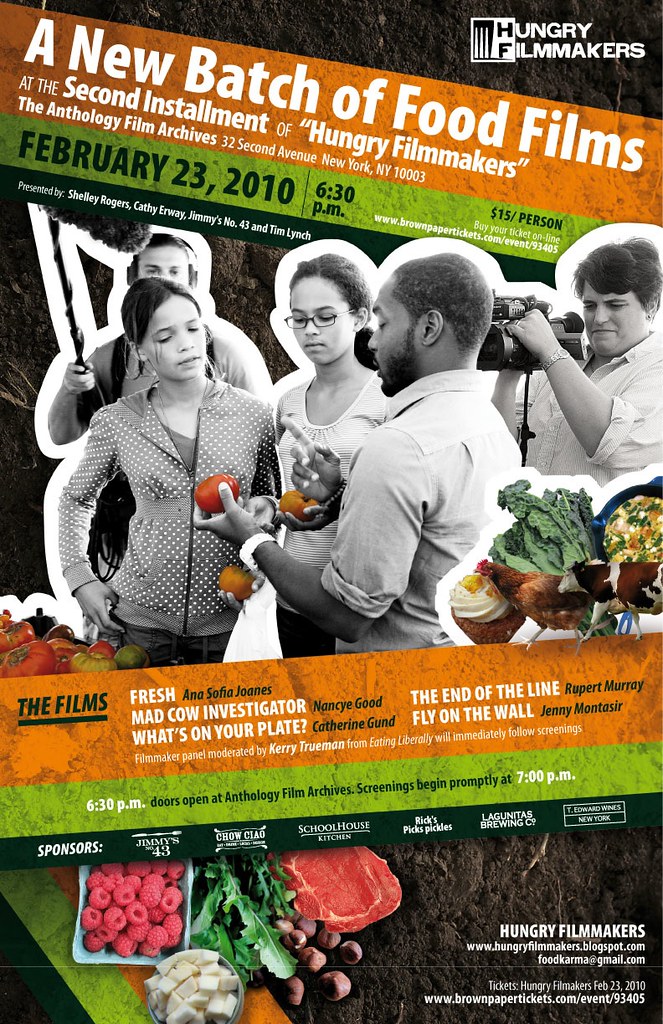 We’re pleased to roll out the green carpet at Anthology Film Archives tonight, for the second installment of Hungry Filmmakers! The food documentary screening and discussion event is back, thanks to the enormous response we received to the first one. In all his years of hosting and having fun at food events, Jimmy Carbone, proprietor of Jimmy’s No. 43 and Hungry Filmmakers co-host along with Tim Lynch, Shelley Rogers and myself, has said that he had never seen such enthusiasm for anything like we saw for the first event. That’s saying something, but knowing the great films involved, we weren’t surprised.


There are still tickets left to tonight’s show, which can be purchased at the door. Once again, we’ll be screening only ten-minute samplings of five food-conscious documentaries that are either newly released or upcoming. It’s a mixed bag, like a colorful cache from a farmers’ market, and again we’ll be showing at least one film that’s as yet unfinished — Jenny Montasir’s exploration of NYC bodega food, Fly on the Wall. One has made its theatrical release, the overfishing exposé The End of the Line. Ana Sofia Joanes’ Fresh and Catherine Gund’s What’s On Your Plate are both looking forward to theatrical releases as they continue to be screened at community events (hear more from both of them on yesterday’s episode of Let’s Eat In!). And Nancy Good’s Mad Cow Investigator is just an incredibly gripping tale about one woman’s search for the causes of e. coli in her community, and is seeking finishing funds. Here they all are, and see their links for more info.

Kerry Trueman, editor of EatingLiberally.org, will lead a panel discussion with these directors and/or their producers following the film screenings. A reception will follow in the theatre lobby with complimentary snacks, Lagunitas beer and wine from T Edwards. Representatives from Just Food will be there, too, as the benefactor of all evening’s proceeds. This time, we’re testing out a little experiment on our audience: dismayed by plastic cup waste at so many events and receptions, we’re asking attendees to BYOC (Bring Your Own Cup!) if they would like to have a drink. Will it work? Will people bring cups, or share their friends’ cup (and germs), perhaps? And in the process, maybe value reusable goods a tiny bit more rather than create heaps of disposable food service waste? We sure hope it will. Otherwise, we’re drinking all this stuff ourselves.