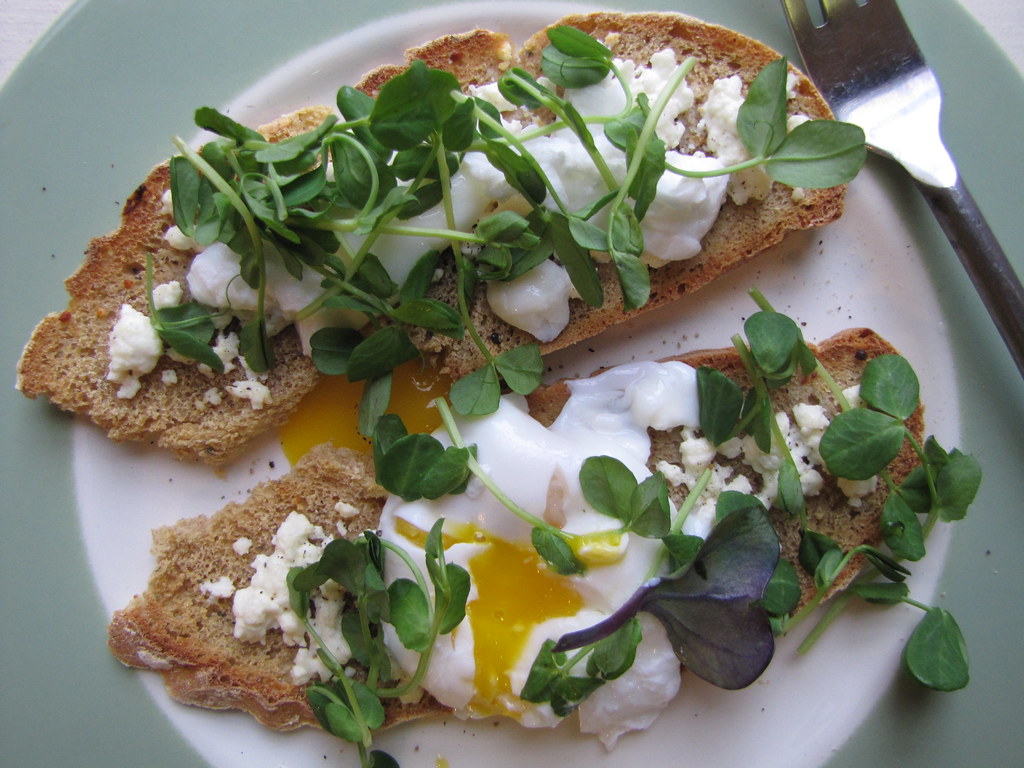 It’s the first day of the Week of Eating In challenge, and I’m taking it easy like Sunday morning. Only it’s Monday. You don’t start skiing by tackling the super giant slalom, no, you keep to the bunny hill for a while (or in my case, never progress from that point, because you find that you don’t like skiing much and have planted your face in the snow while getting on or off the ski left one too many times). So for a possibly frenzied week of cooking, in the midst of my book’s release no less, I wanted to start off real simple.


I’d spent the last night of freedom, Sunday, actually doing a very eat in-friendly activity: going to a potluck party, at my friend Noah’s. There, I’d brought a very complicated dish of braised turnips with a soy and honey-marinated pork belly slab that I wasn’t too crazy about the turnout. But, since it was all good friends who were there, I didn’t mind the so-so experiment (sorry guys, to make you the guinea pigs). See, I’d bought a bag of round purple turnips, at least a dozen or more, from the Grand Army Plaza Greenmarket at just $2, and to stock up even more, another large bag of apples for $3. So I was determined to use some turnips. Today, I ended up making a series of meals much more satisfying than that creation, just for myself (the opposite of my intentions). Go figure. 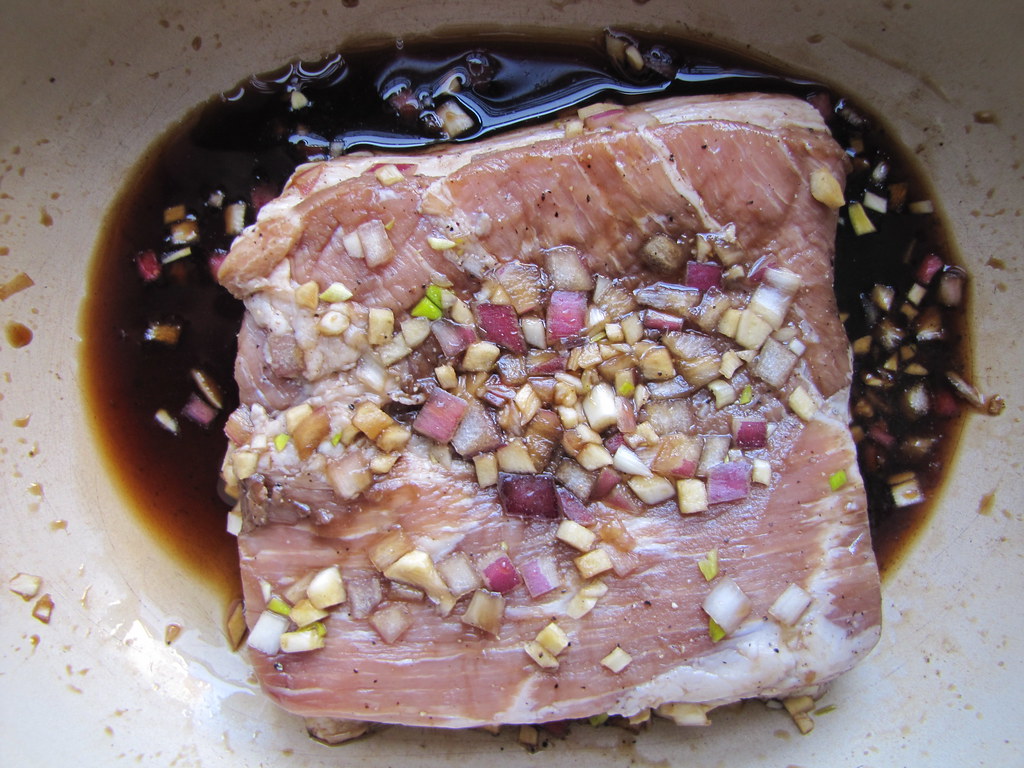 But it didn’t come easy. Mondays are my radio show days, when I host Let’s Eat In at Heritage Radio Network, and ironically spend the next hour having lunch with my guests at Roberta’s Pizza, where the station is based. Granted, Roberta’s makes some of the best pizza in town, and I’m always eager to sit down for a meal with my guests (this time, filmmakers Shelley Rogers and Ana Sofia Joanes). But I brought my lunch, a quarter-loaf or so of no-knead bread baked with some herbs, and a shaved fennel and yogurt salad that I’d whipped up the other night (recipe to come soon). So I sneaked bites from it here and there before running off, to make another appointment. 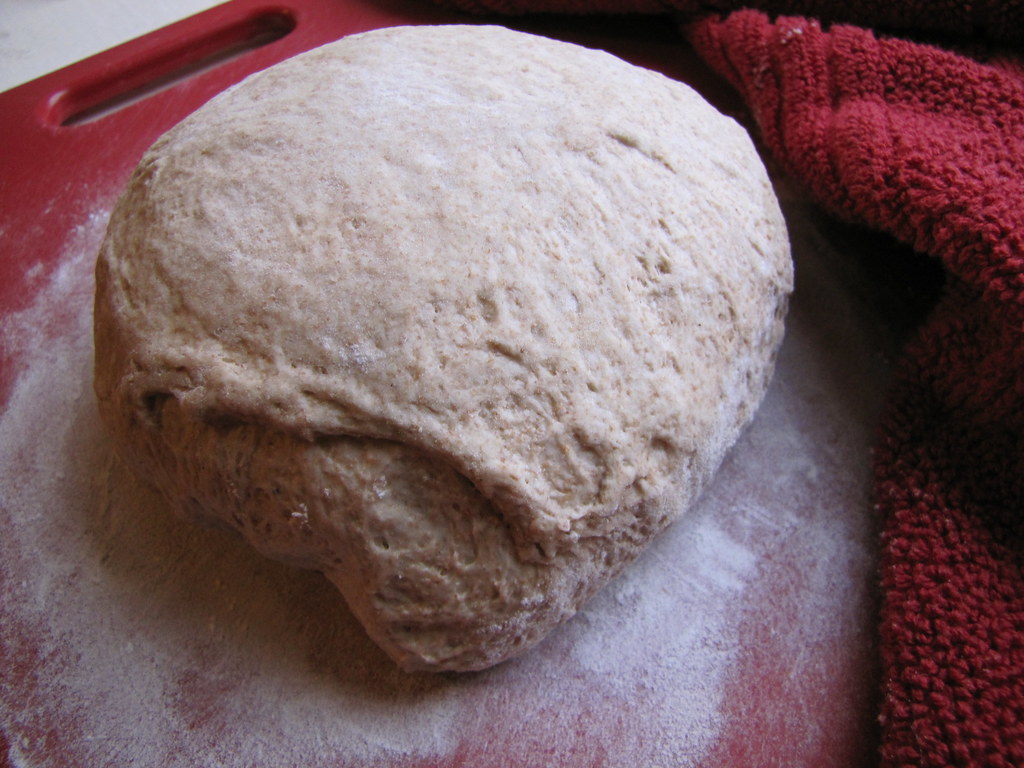 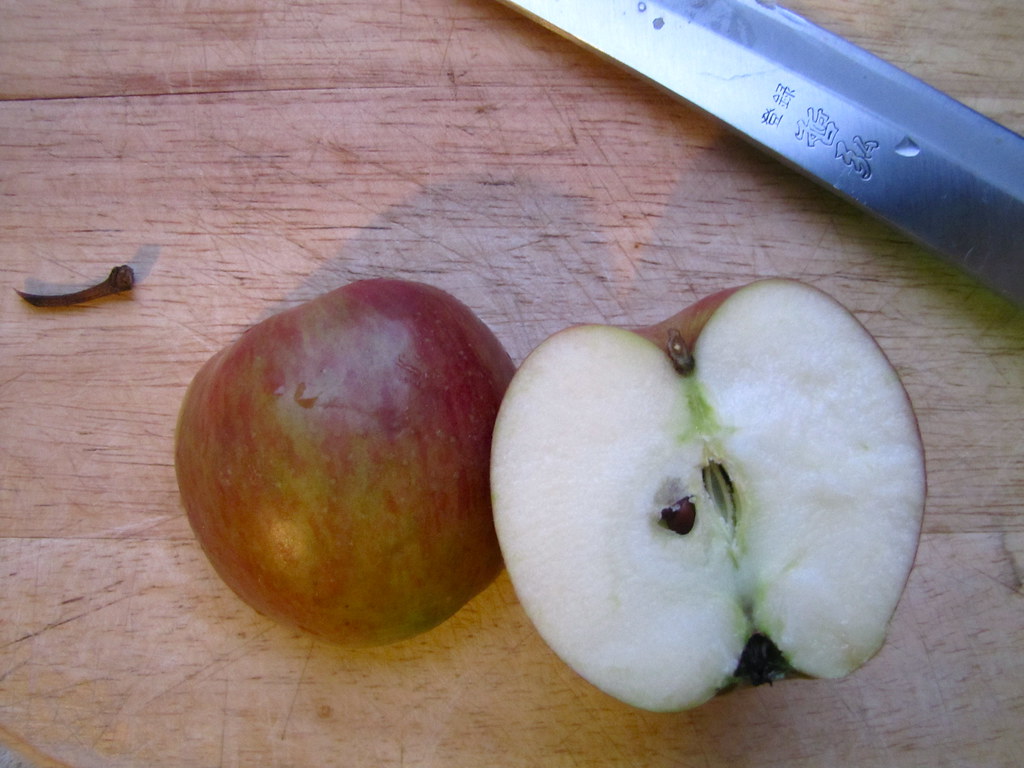 an apple a day keeps the snack cravings away

After all that healthy stuff, I was really craving an egg and cheese for some reason. The kind you can get at any corner deli on a roll or bagel, with the strangely ooze-worthy “cheese food” that spurts between the scrambled egg and bread when you bite it. I wanted this sensation, and this familiar fast and cheap food, but what I got instead was ten times better: I crisped up a couple slices of freshly baked no-knead bread in the broiler with French feta crumbles (leftover from a night of wine pairing with the Noble Rot last week, after making pitzas with pomegranate seeds and fresh arugula). I poached an egg instead of the frying one just because it was much easier than having to clean up stainless steel with scrambled-egg crust in the aftermath.

Finally I topped the poached egg and toasted-cheese bread with some micro mesclun greens that were about to turn. These greens had been tossed along with the rest of my purchase free of charge from a Windfall Farms farmer, Tim, at Union Square Greenmarket two Wednesdays ago. I’d arrived close to closing time for the market, and these greens, which had been left out all day, couldn’t be sold anymore in his estimation, so I accepted the gift. But, I refused to eat them for a week and a half, thinking these expensive garni were too luxurious for my enjoyment alone, and wanting to save them for some more worthy occasion. But a week and a half later, most were still good, but some had begun to rot. So I gave up and ate them. And because they were so crisp and delicate and frou-frou, I got to indulge a little, restaurant-style, for my first night of the Week of Eating In. 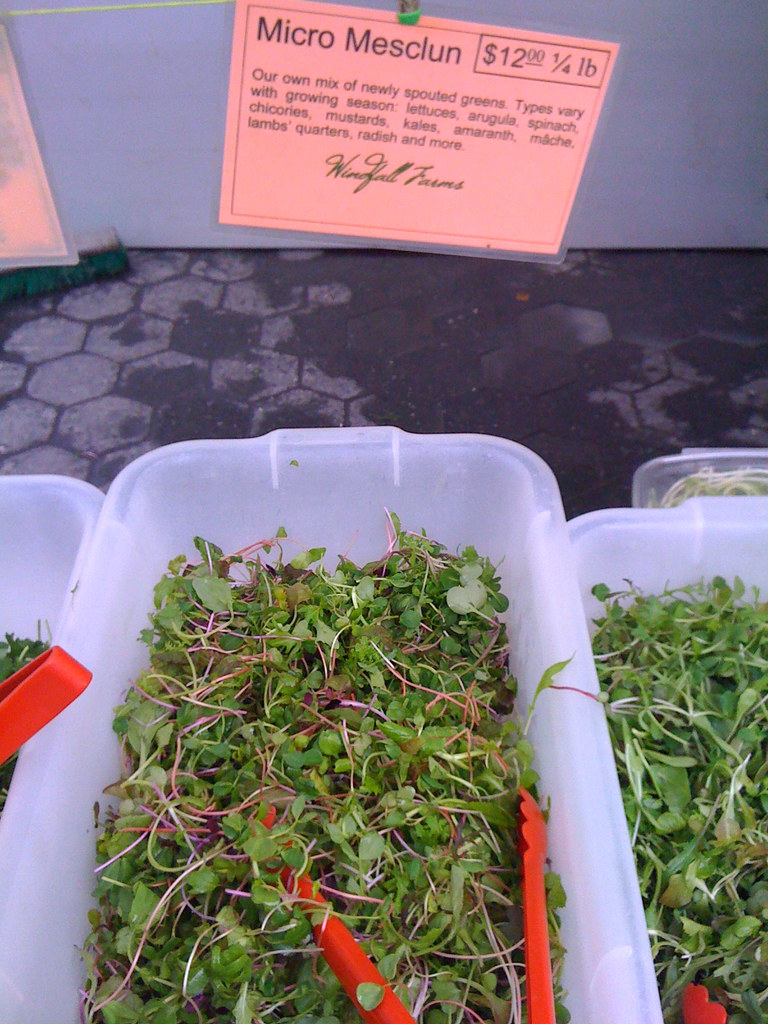 Later on, I visited an event put together by the Green Action Network, a student-run organization at SVA. The group had organized a “food week,” filled with talks, potlucks and food screenings for documentaries like Food, Inc. and King Corn. They had invited me by email a couple weeks ago to the first night of food week, a “food fair,” featuring a number of demos and discussions. When I arrived at the school cafe where it was held, Maggie and Hilary, who were apparently fans, had a copy of my new book at their table and met me with starry expressions, as if not expecting that I’d actually show up. I spent the next hour sitting at the table talking with everyone. It was a small gathering, with fellow students dropping by to see what this fair was all about. One table had a comparison of apples from the Greenmarket, and more expensive ones from street fruit vendors cut up to sample (guess which ones tasted better?). Another table had fliers on composting, and a bag of compost. 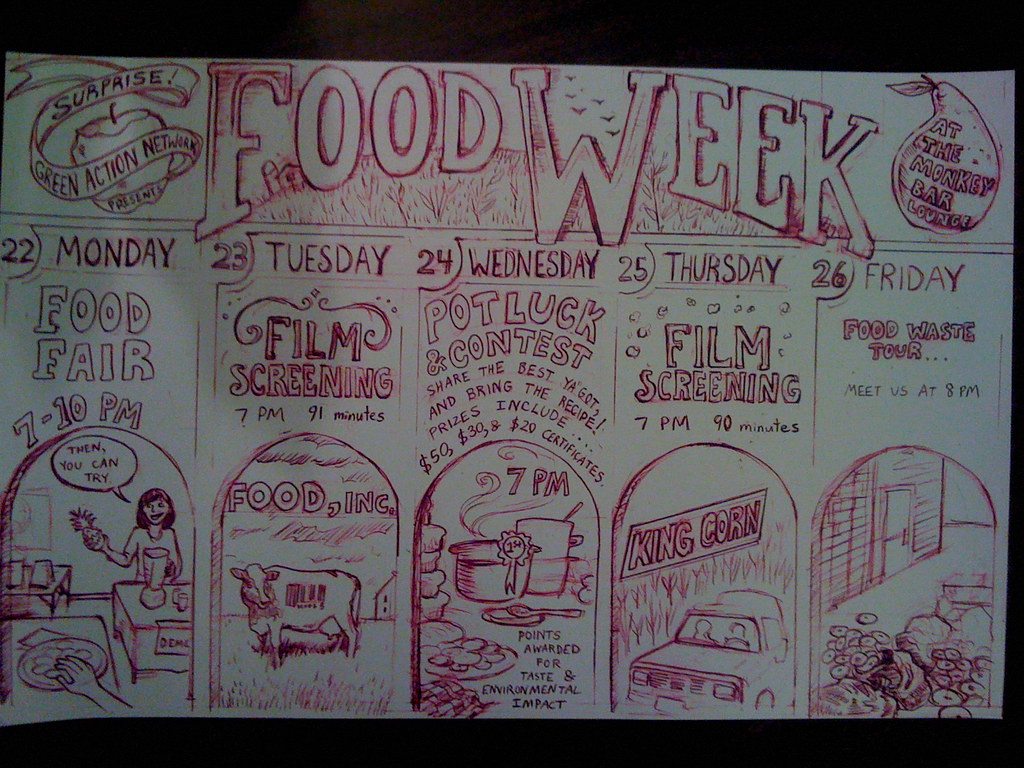 The organizers treated me like a star guest, but really, I was just happy to relax, and to observe the grassroots efforts and particular food interests of the group. One member, Marissa, demonstrated her famous green smoothies. A puree of red Swiss chard, apples, oranges and banana, her green smoothie was delicious and completely free of greenish bits, which I’d half-expected. “It’s because my blender is amazing,” she said, pointing to her commercial-grade kitchen device.  She’d bought it refurbished for $500. “I saved up an entire summer for it, and it changed my life,” she said proudly. According to other members, she was the green smoothie genie of the dorm, happy to share her concoctions with others.

When I left the fair, I was debating heading over to a private party in honor of the 25th Anniversary of D’Artagnan, where friends of mine work (and who’ve collaborated with me on projects in the past). It was a swank event, and I was sure it would be filled with the finest food and drink. The temptation seemed a bit too much, even though I was already full. So I guiltily skipped out on the celebrations, and called it a night. Day one of eating in (even while out and about): success!