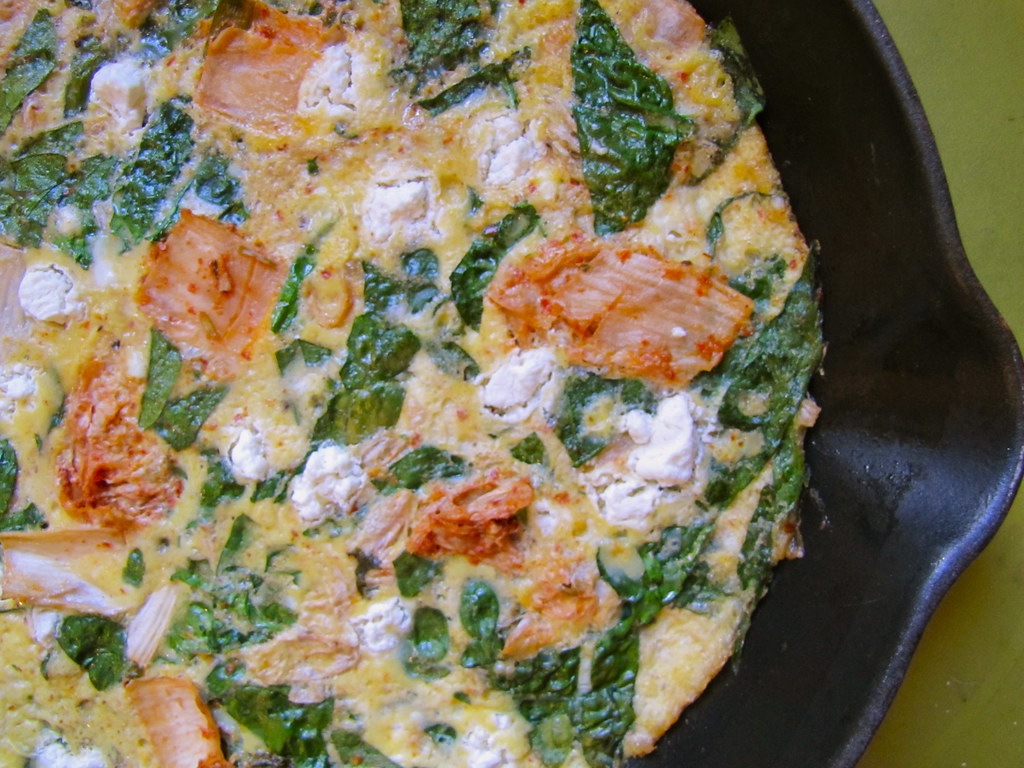 What is this, la-dee-da?

No, it’s really not la-dee-da, it’s eggs, with pickled cabbage and spinach in it. Okay, well maybe the goat cheese is a little la-dee-dah, but it’s used pretty sparingly. So the whole dish is most certainly not a fancy one. It’s just what you call an omelet if it had never been flipped, so you don’t have to master the art of French cooking like Julia Child and have that euphoric moment once you get the hang of flipping it right — but it’s euphoria eating it, all the same.


This, a protest to the word frittata from a friend, becomes so silly once you look at the facts. When I heard Joann Kim call in and talk about putting kimchee in omelets on last Monday’s Let’s Eat In episode, I thought that had to be the strangest, most unlikely combo I’d ever heard of. (And I knew I had to try it out soon.) But it turns out, kimchee omelets are not strange at all to Korean cuisine. It’s not even that far off from kimchee Korean pancakes, a common restaurant find, even though it’s so homey. Eggs and preserved cabbage — what could be more peasant-food than that? Plus, it’s exceedingly easy and quick to make. 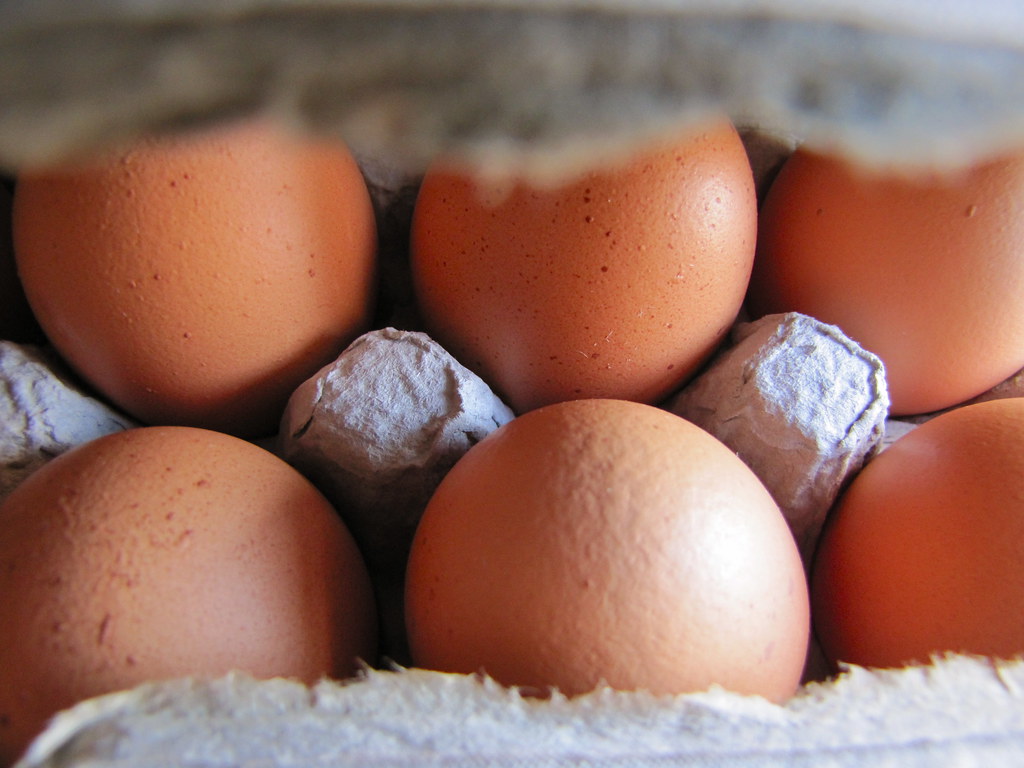 it all starts with the egg (or is it the chicken?) 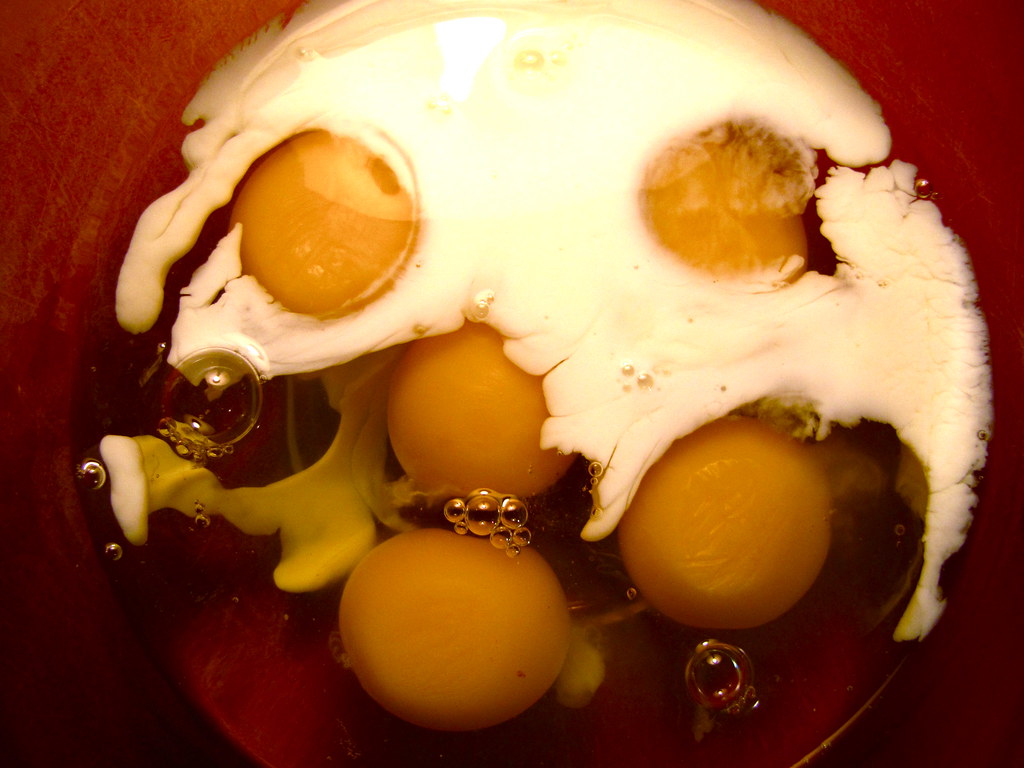 milk clouds a bowl of them, pre-whisking

I’ve found myself preferring frittatas over omelets more and more lately; first, because they just look so beautiful in the final presentation, and secondly, because so much of the work is hands-off. All you need to do is start making an omelet, swish the eggs-and-ingredients mixture around in the pan for a minute, and then stick it in the oven rather than tend to it every second. So a couple weekends ago, I did this to satisfactory results with spinach, some gouda, and caramelized onion. The next one, I made huevos frittata and crushed some tortillas into the eggs along with other veggies. This time, it’s kimchee all the way, after being advised by not one, but two local food experts (Joann, and Kheedim Oh, the founder of Mama O’s Kimchee, who was a guest on the last Let’s Eat In show). If these folks — and if a whole culture — are doing it, it can’t be such a bad idea. 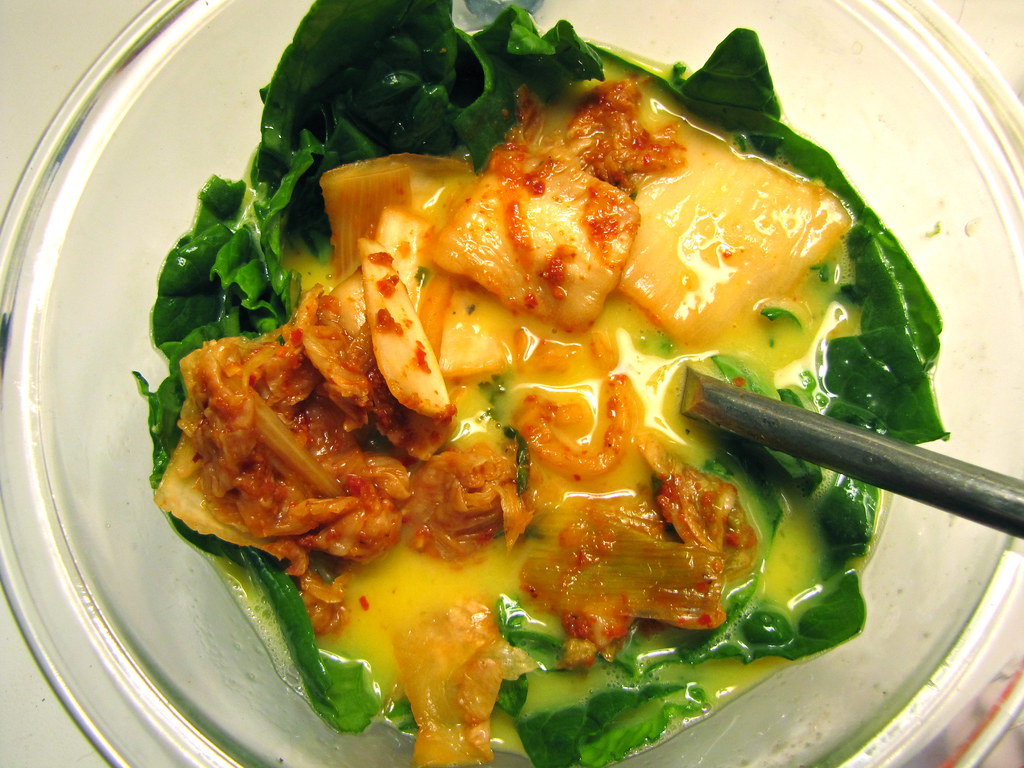 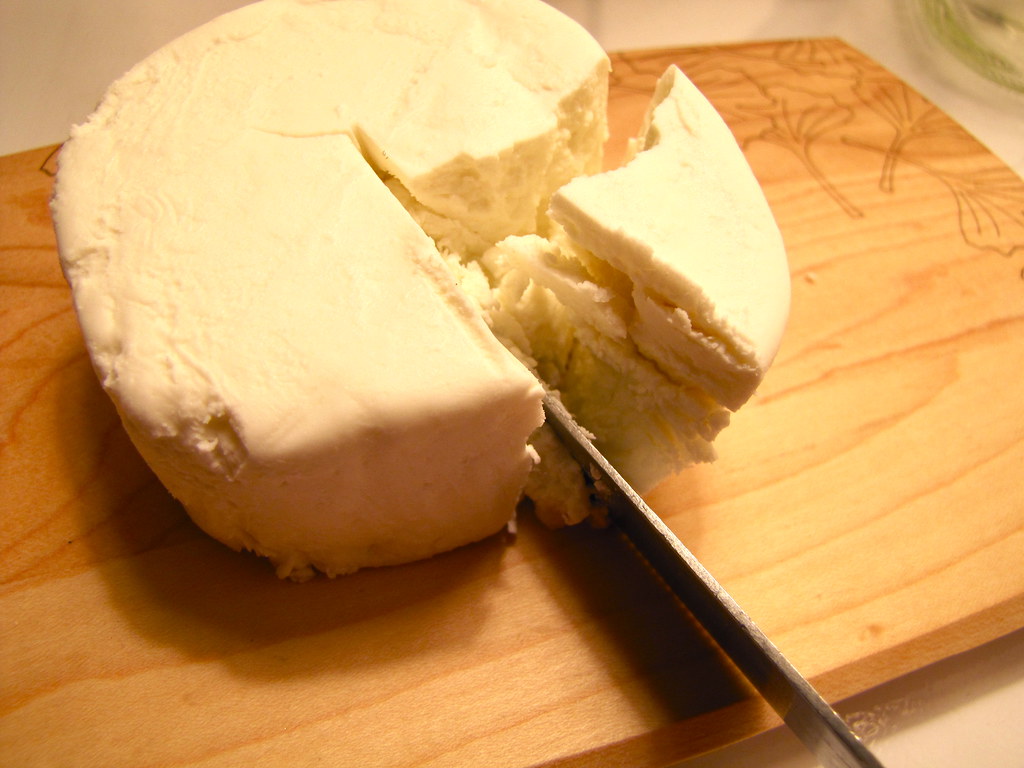 spinach and kimchee go into the egg mixture, while chevre is crumbled to dot on the surface

But oh my goodness, were they ever right. For color, and to mellow out the flavor, I added some fresh, dark green spinach leaves along with kimchee to the frittata batter. Cheese is not known to traditional Asian cuisines, but I opted for chunks of creamy chevre in this, too. It sounded absurd; what better reason than to try it out? And if any cheese were to be added to this, I reasoned, it should taste far distinct from the briny spiciness of the kimchee, and this it did. The particular chevre I’d gotten a squat round of was caprichio de cabra, found at Greene Grape Provisions. It was recommended to me by the staff, for its mild taste and that crumbly but creamy texture that I was looking for, which would ooze into eggs with a quick bake, as in frittata making. The combination was so good, though, I think I could eat them alone — kimchee and chevre — on crostini, anytime. 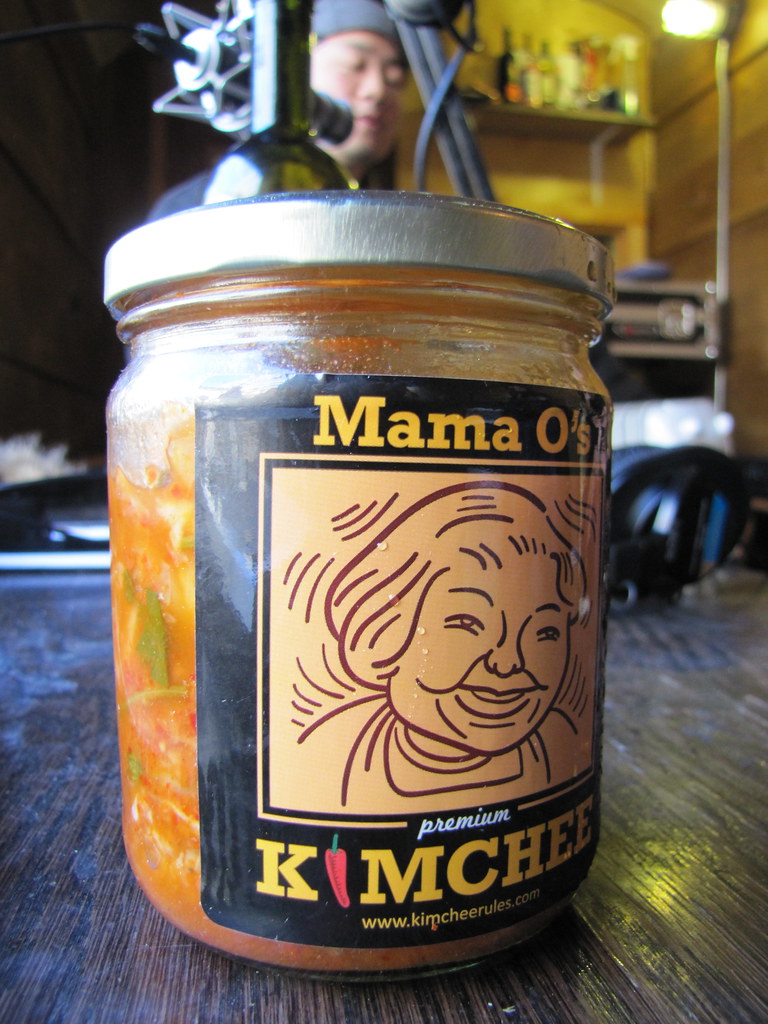 my favorite kimchee, Mama O’s (with Kheedim Oh in background)

Finally, you’re not going to like this dish unless you like kimchee, I’ll admit. Some have an aversion to the pungent pickled snack. Jeffrey Steingarten did, as he recalled in the opening pages of The Man Who Ate Everything, and got over it by eating a whole lot. I observed as my dad cured himself of a similar disposition, which I think was more mental than tastebud-related. At a Korean restaurant recently, his first taste from the cold kimchee appetizer dish brought a sour expression to his face, and a mutter of, “Oh, I forgot I didn’t like kimchee.” Yet after a few nervous minutes afterward, he went in for his second taste, and another and another. By the end of the night he was the only one slurping the last drops from the kimchee seafood casserole. So the moral of the story: food aversions can be overcome. Why do so for kimchee? Well, it’d be like making a new friend. And then, you can introduce it to others, like eggs. 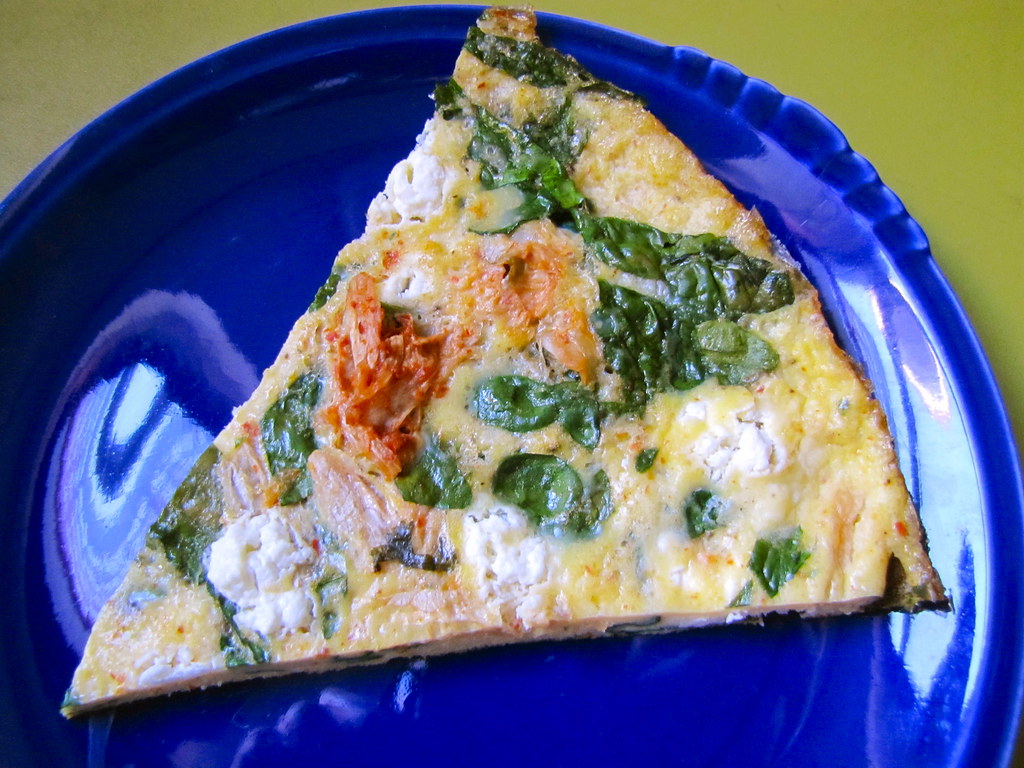 a slice of heaven

Preheat oven to 350 degrees. Whisk the eggs and milk in a medium-large bowl and season with salt and pepper. Add the spinach and kimchee and stir. Heat the oil on a 6-9 inch oven-safe skillet (smaller if you want a thicker frittata, larger for a thinner one) over medium-high. Make sure oil coats entire surface, and pour in the egg mixture. Cook for 1-2 minutes, gently stirring the egg mixture and pushing away from the edges. Add the chevre evenly across the top. Transfer pan to the oven and cook 4-6 minutes (depending on how thick the frittata is) until eggs are just firm. Let sit at least five minutes before trying to pull the sides away from the pan, gently, with a spatula. Cut into wedges and serve immediately.

Five brownie points: Best to accompany this dish with something light, but give yourself a pat on the back for not having your eggs with bacon. Why bother when you have such an assertive kick instead from kimchee? Eggs have cholesterol and protein already, and so spicy cabbage, fresh spinach and a little cheese are a good way to flavor them without adding too much guilt; you’ll get lots of nutrients like Vitamin K from the super food spinach, so add heaps of it (the leaves will cook down to nothing in the eggs if it looks like you’re adding a lot).

Seven brownie points: The spinach I’d bought two weeks ago from a freezing cold farmers’ market has kept up especially well in the crisper. They barely managed to avoid freezing by the time I’d purchased them, and they must have been really fresh because I’m still working through the bag. The kimchee was locally made in Brooklyn by the small business, Mama O’s Kimchee, and the chevre, while not local (imported from Spain) was made with oldschool, relatively earth-friendly values from goat’s milk, as most small cheesemakers in Europe are wont to do. Also, the eggs were cage-free and milk organic.