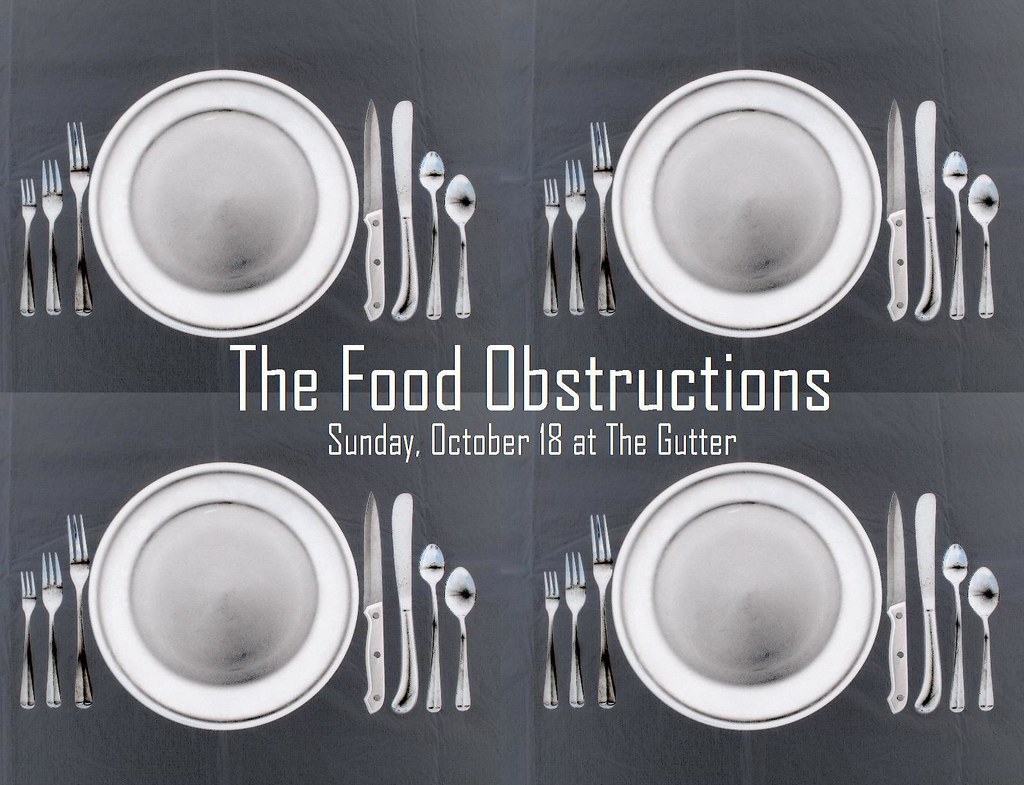 Whether you’re cooking for one or preparing a huge feast, there’s always some obstructions in your path — a too-small kitchen, not enough flour. Instead of cursing bloody hell, let’s have fun with that concept, and cook up something great given five obstructions. It’s a cook-off — yes, another one! — with a twist, and the first installment of the monthly series of them will commence October 18th, at The Gutter.


The Food Obstructions, as it were, is a new breed of cooking competition for the fervent or casual foodie alike. Here’s the whole drill:

In 1967, Jorgen Leth made a 12 minute film, “The Perfect Human.” In 2003, Lars von Trier challenged Leth, his mentor as a filmmaker, to remake the film with obstructions that would complicate its production. Von Trier titled the result “The Five Obstructions.”

On October 18, 2009, three Brooklyn food enthusiasts challenge their mentors and fellow culinary artists to a similar challenge, “The Food Obstructions.” Fifteen contestants will be accepted to make a dish of their own originality. In the spirit of the film, there are five obstructions to whatever type of dish they will make:

The dish will be judged on:

We’ve come up with a novel judging scheme, by which each attendant at the cook-off gets a scorecard to vote for their five favorite entries. The audience ultimately chooses which dish wins, but there’s another surprise in how it’s going to be tallied. Hold your breath! And what do the fine and fierce competitors receive if they should excel enough to win? The cash pot, from everyone’s $5 entry fee, will be divided amongst the 1st, 2nd and 3rd place winners, with a bar tab thrown in there somewhere as well.

To enter: Send an email to [email protected] Plan to make enough of your dish to serve at least 50 sample-size “bites.” If you need equipment such as a chafing dish, or require anything other than a flat plate and fork for service, please say so in your message.

A little background: The Food Obstructions was dreamed up by my friends Karol Lu and David Roderick. Neither of them strangers to local food competitions (Karol is the standing second-place winner of Enid’s Apple Pie Contest — next to my third!, placed twice at The Brooklyn Kitchen’s last Cupcake Cook-Off, and has won titles with chili, tofu, ramen and more pies, and she also co-hosts the annual Risotto Challenges with me; David won that first Risotto Challenge, and a Chili Takedown, too), this cult film-inspired cook-off came to them. So when The Gutter approached us to do a “food event” at the bar, the idea was resurrected from the ashes of Summer ’09: Things Not Done, and here are we are now. Come and let’s make some fun!