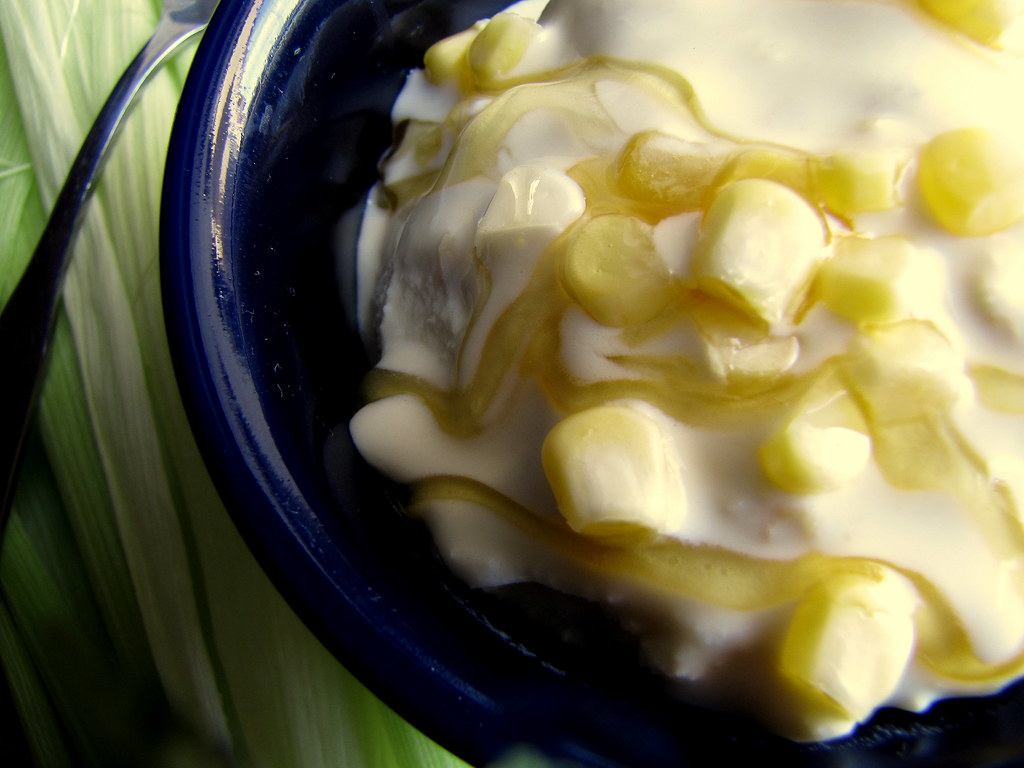 I never did like candy corn. But this ice cream, at first lick, tastes a bit like the Halloween haunt. Perhaps I just got a heavy drizzle of honey stuck on my tongue with it (a main ingredient in candy corn). Then afterward, instead of a slightly sick feeling from the cloying, over-sweetness and gritty mouthfeel, the spoonful burst with the taste of fresh corn and pure creaminess. Sweet corn, sweet cream and sweet, wildflower honey. That’s my kind of candy this season.


It’s corn season, full-swing. Whether it’s grilled Mexican-style with mayonnaise, chile and lime, cut kernels studding salads, or just boiled and buttered, crisp corn is all around. I don’t think I know anyone who doesn’t like sweet corn on the cob. Kids and adults alike can’t seem to get enough of it. How strange, then, that this summertime treat is largely unheard of in Europe, for human consumption, at least. 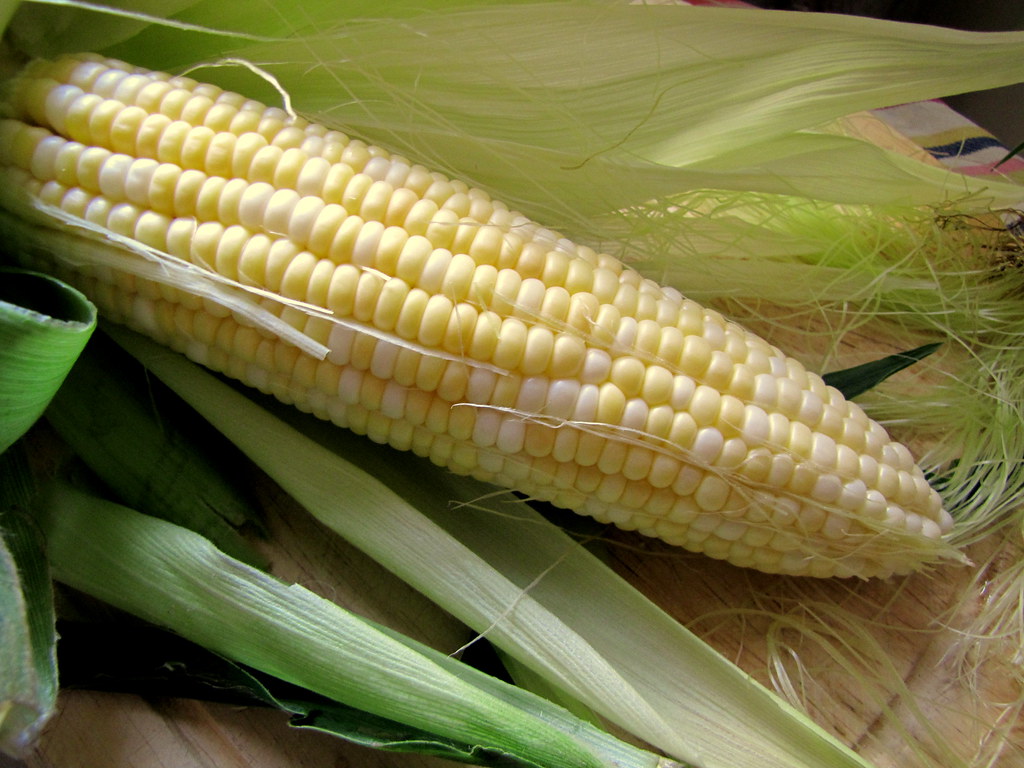 Shucking corn always brings back memories of being given this chore before dinnertime as a child. I find just as much satisfaction today out of cracking off the tough outer husks and removing as much of the pillow of silk underneath them as possible as I did then. Each ear is created infinitely differently, I’d also taken away from those memories. Some have more tightly packed rows of kernels, some have more whitish kernels to yellow, randomly strewn; some have rows that twist, or look even more jumbled, like a game of checkers newly smeared. And all this is a mystery until you peel away the last, elastic sheaths of husk. Once revealed, some ears of corn are indeed just better — crisper, juicier, and more promising of sweetness. This corn happened to come to me from a small farm in Massachusetts, along with a carload of other organic goodies. But corn on the cob’s everywhere right now, and there isn’t a better way to enjoy them than extra-fresh from a farm stand. Trucking corn long distances may seem an easy feat — the husks and silk are built-in padding — but really crisp, juicy kernels can’t be beat, and that’s a sign of super-freshness. 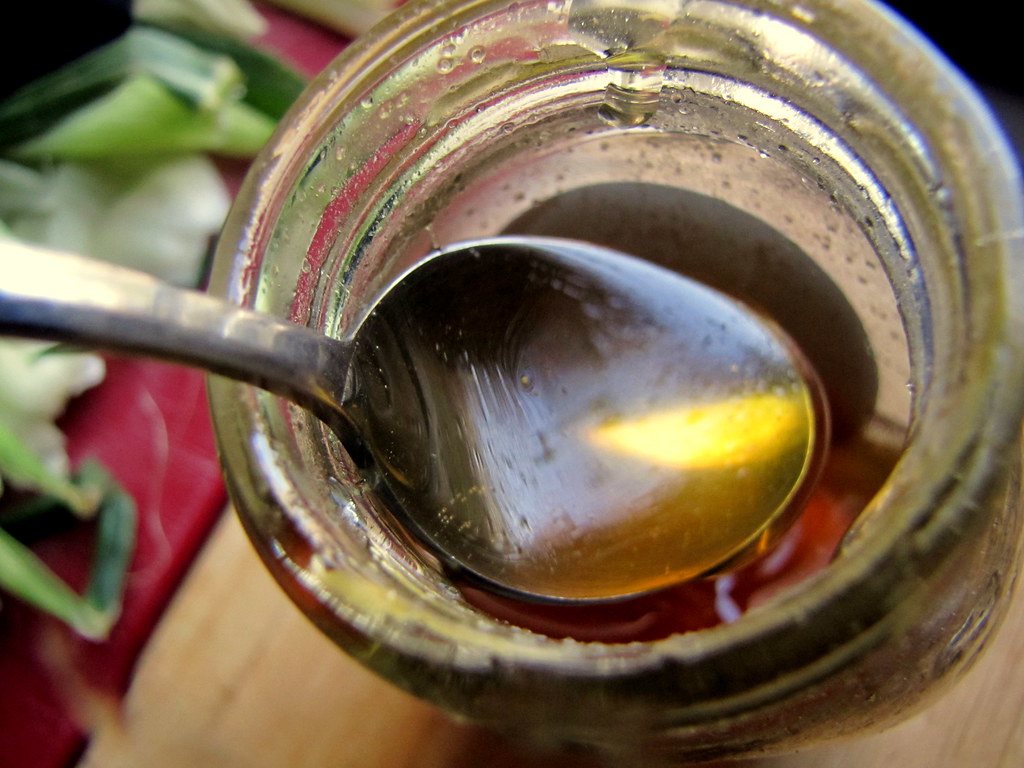 Since we’ve gotten enough of it grilled, boiled, buttered, or dressed in salads by now, early September, why not put corn in ice cream? I’m listening, my brain told me after that proposition. But I need something else, and I’m not sold on chile and lime in this. How about something else sweet? And something, for that matter, a little more local. Honey, now we’re talking.

I’ve been spoiled by good honey all summer. Thanks to all the buzz behind legalizing beekeeping in NYC, and the concern over the future of bees (and hence, the health of crops) given the dreadful CCD, honey is kind of all the rage. I have a comb hanging out in my cupboard, and half a jar from Queens County Farm Museum. Since waxy bits don’t sound like a great accoutrement to sweet cream, I went with the jar. Honey is also one of those fun, but wildly inappropriate things to measure out in a cup; a lot is left behind to lap up. 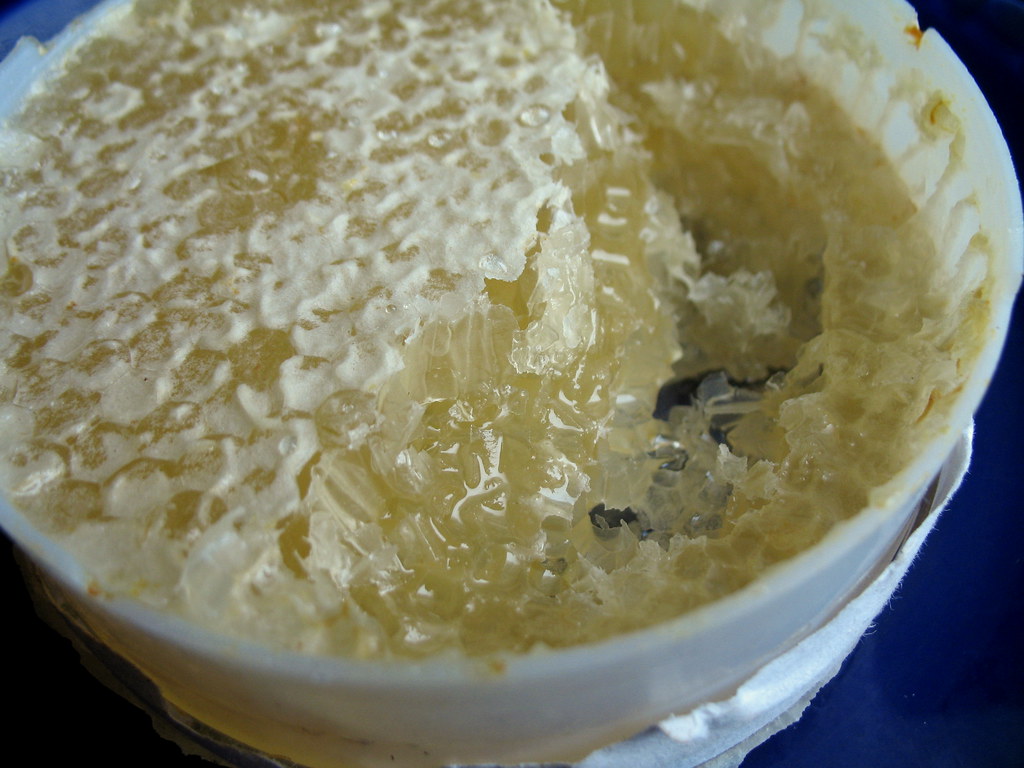 I garnished the top of my ice cream scoop with more honey and corn, but this recipe has so much of both that it’s hardly necessary. The corn kernels are steeped in the milk before it’s used to temper the beaten egg yolks and become a custard. The sugars are almost all replaced with honey, and corn. So the list of ingredients is short, and sweet.

Beat the egg yolks with the sugar until lighter in color and fluffy. Combine the half and half and corn kernels in a medium saucepan. Bring just to a boil, stirring occasionally and turn off heat. Temper the egg yolk mixture by adding a small spoonfuls of the hot milk mixture at a time, while whisking, until about half a cup has been added. Transfer the egg mixture to the milk mixture in the saucepan and stir constantly while cooking over medium heat until the mixture is just thick enough to coat the back of a spoon (about 8 minutes). Do not let boil. Add the honey and stir to combine thoroughly. Cover in an airtight container and chill overnight.

Eight brownie points: Not only is honey hot high fructose corn syrup, like you’ll find in many store-bought ice cream brands, but it has a number of natural vitamins and minerals. So does fresh corn, another sweetening agent in this ice cream. I found that my batch of ice cream, using 1/3 cups of honey, was a tiny bit too sweet, so I added a little flexibility in the recipe above. Measure out to your own taste, especially if you’ll be drizzling more on afterward.

Eight maple leaves: Does that mean a tie? Actually, eight is not a good thing for the health factor, but that’s practically inavoidable, since it’s ice cream. Eight brownie points on the green scale is pretty good, meaning its ingredients have some sustainability cred. Here, the honey was local and the corn also from a small farm, but the milk was a grocery aisle organic brand.