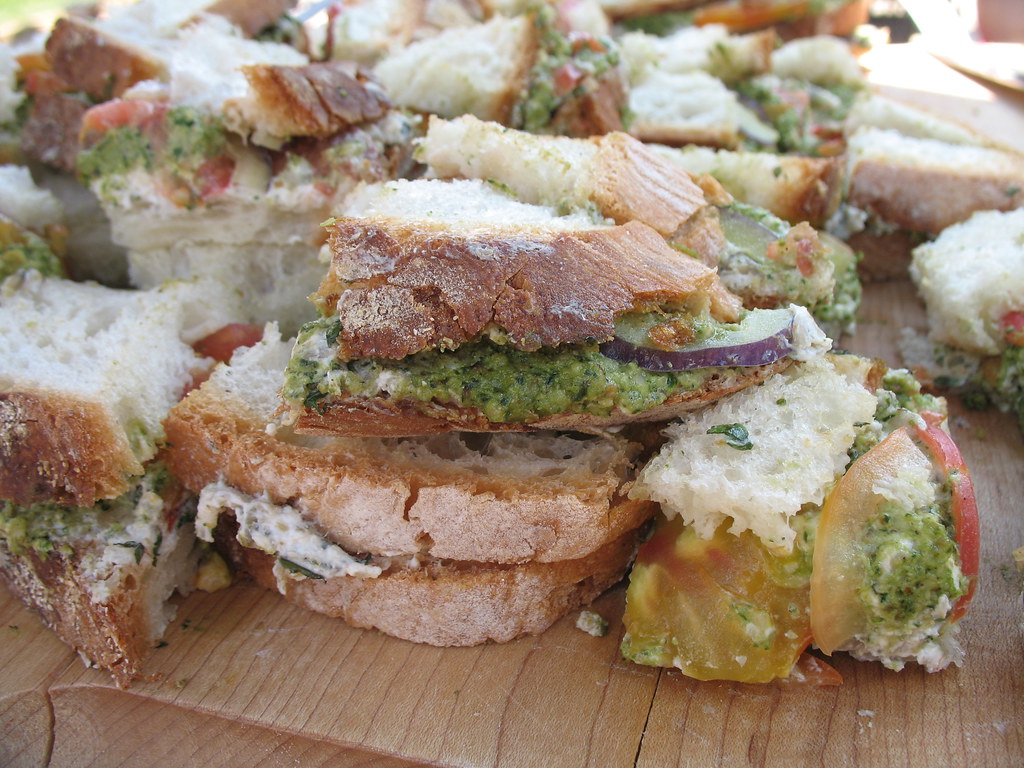 win the Souperdouper Soup Kitchen Sandwich Special, that is! It was a sweltering hot Saturday like most of the scorchers this week, but we saved a hearty appetite for the twelve different sandwiches, soups or combos of both at this benefit cook-off. And soon, we hope even hungrier people from the neighborhood will get to enjoy the best of the bunch, too.


This one-off event was a collaboration between Noah Berland and myself, in conjunction with the Greenpoint Reformed Church’s soup kitchen efforts. For the past several months, Ann Kansfield and a dedicated team of volunteers have been running the Greenpoint Interfaith Food Program, serving about eighty people each week wholesome meals made in the church. It sounded to us like fun community service to get involved in; but with all the enthusiasm for homemade food competitions lately, it sounded even better to make the hungry — as well as the soup kitchen’s staff — something spectacular. Just like we do for all the attendees at these events. Hence, this cook-off was created, and at a later date to be announced, we’ll be serving a soup and sandwich menu devised by the winner there together. But until that day comes (and word will be spread to anyone willing to volunteer for that), there is an important order of business to attend to: the winner recap.

There was quite an impressive lot of entries from the chef-testants, and all of them deserve credit for enduring that ninety-degree sun all afternoon. Sadly, Dave Klopfenstein’s ricotta, arugula pesto and heirloom vegetable sandwiches (pictured above) didn’t make it to the finish line, though he lost the tip of his finger to a mandoline for the effort and still trooped through the entire day. Nor did several other tasty entries — let’s take a look at some. 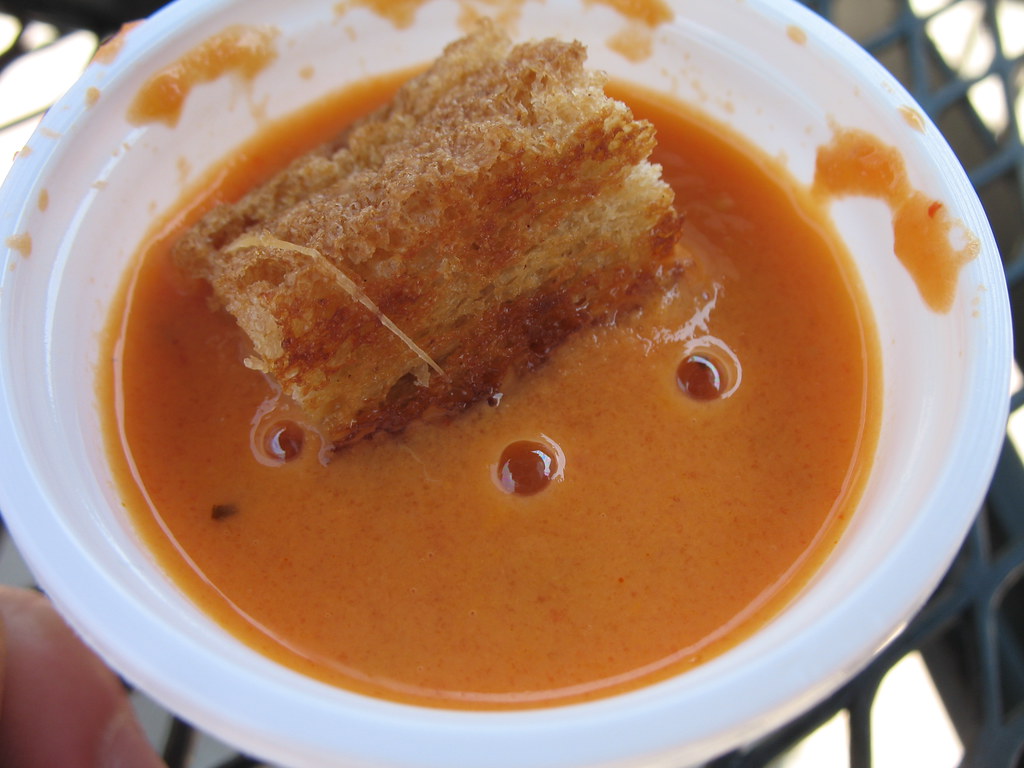 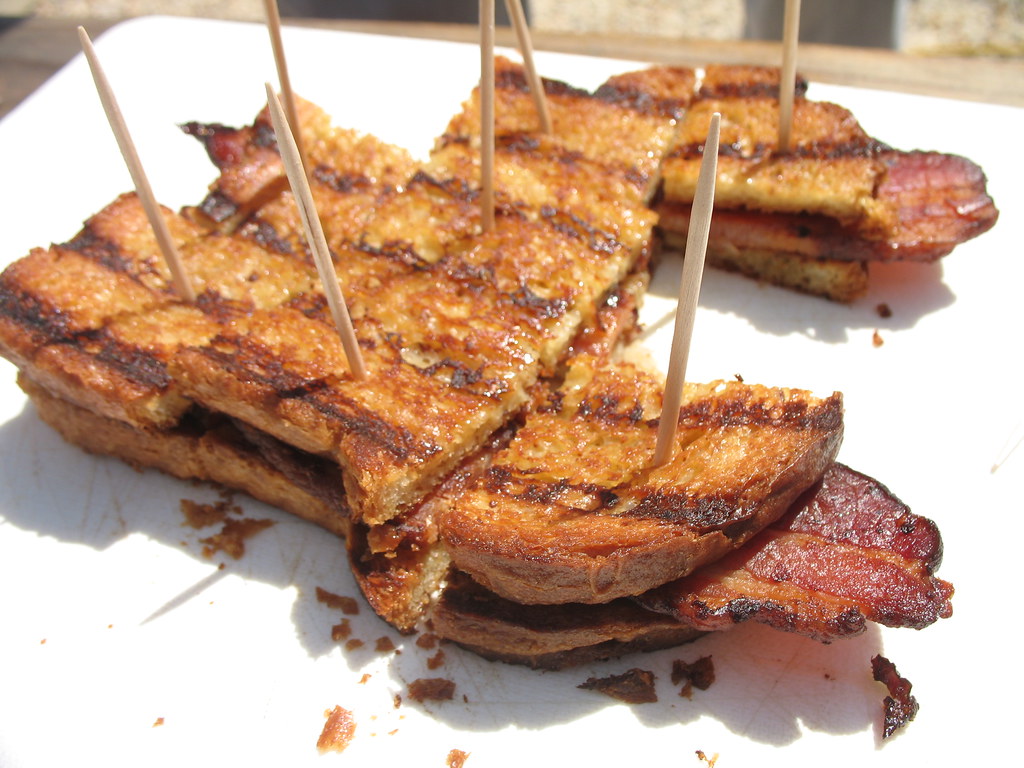 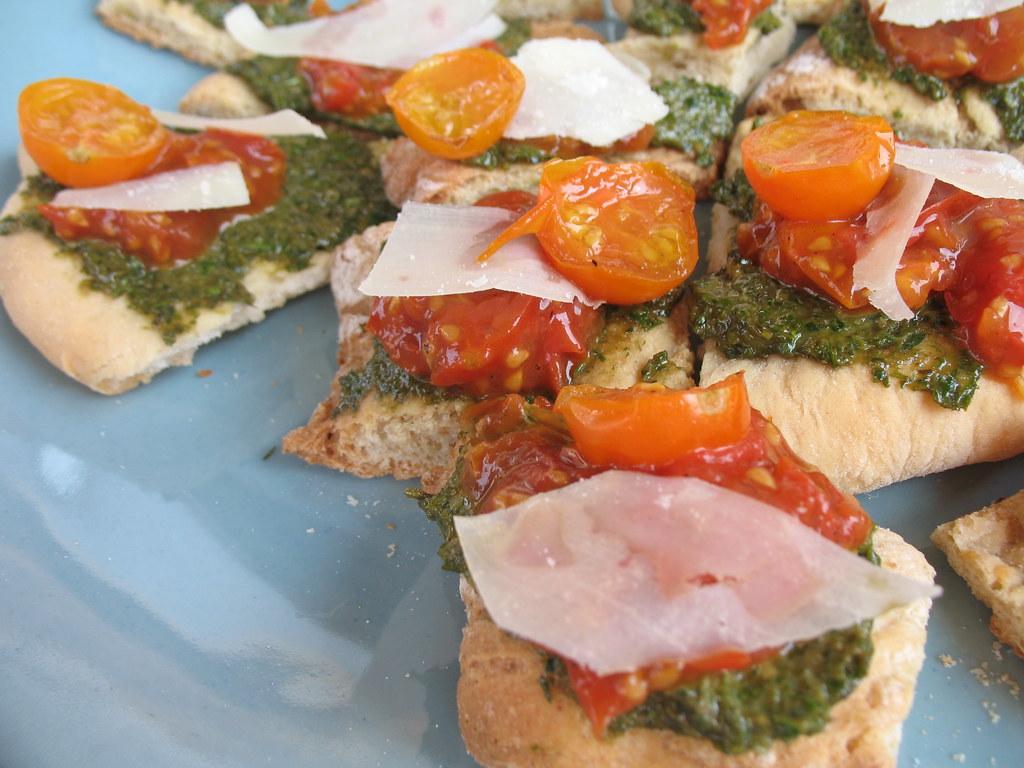 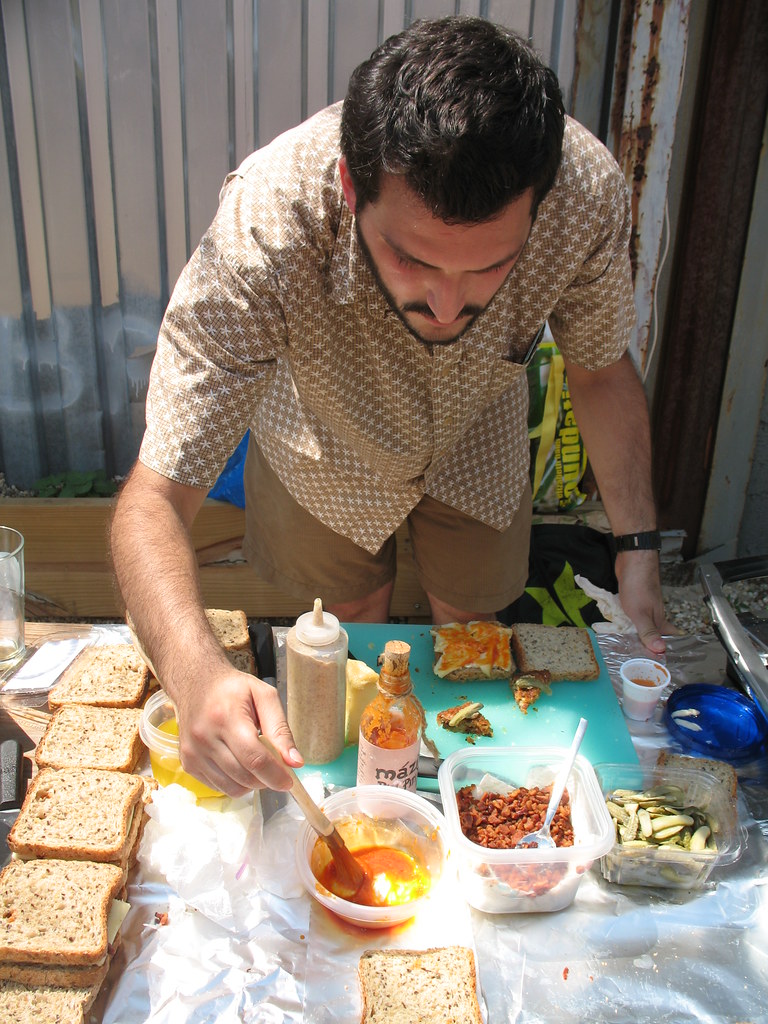 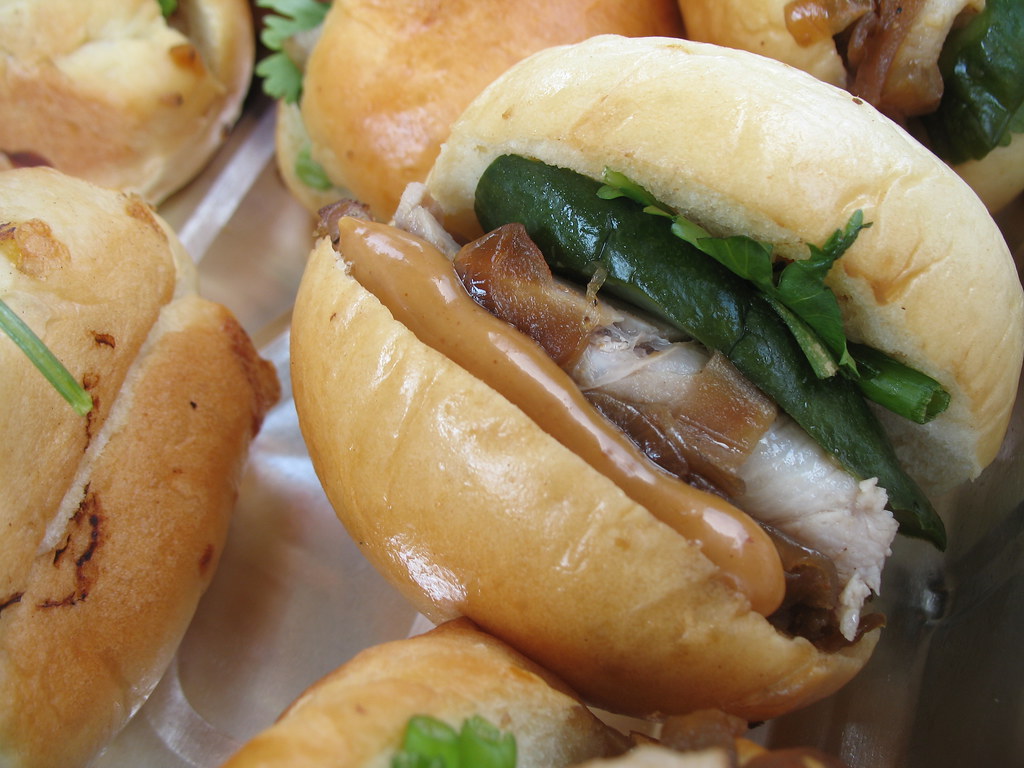 Some contestants went for classic, while others tried for a signature of their own. All were rewarded fairly equally. Adam Pollock of Fifty Bucks a Week created a neo-traditional tortilla sandwich, using the common South American meaning of “tortilla” in creating a layered omelet with seasonal vegetables like green beans and peppers stuffed between hearty seeded bread. In the classic category, Lacey Tauber made a “Texas Gazpacho” perfectly seasoned with Worcester sauce and some kick. I enjoyed slurping up Emily Hanhan’s chilled strawberry soup with yogurt sauce along with her chocolatey, bacon and green apple sammies. And though it was way too hot to bother with heated trays, I found myself slurping up the last slivers of seaweed from Jarret Ditoro’s savory miso, shiitake and tofu soup (another injured hero of the event, suffering from a fractured arm). 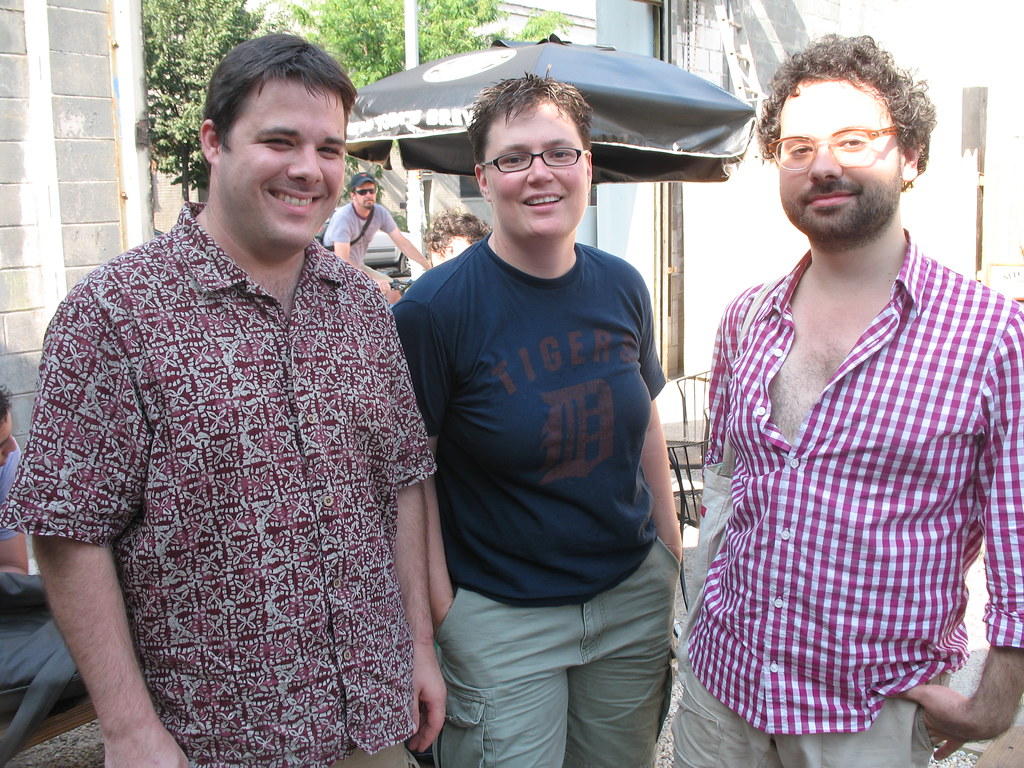 Our judges would determine whose entry was the best, though, and would be made with some adaptation for the soup kitchen. The elite panel included Ann Kansfield, director of the soup kitchen; David Perez, from The Brooklyn Kitchen and Feast; and Matt Greco, renowned chef of of the restaurant Char 4. The audience’s votes would determine one popular winner, too. Here’s how the winnings went:

So clearly, Jui crushed both competitions with her soup and sandwich combo. I can only try to imagine the countless hours she must have spent in doing so. The freshly baked buns, which were mildly sweet and lacquered with eggwash, tasted just like empty char sui buns, and the pork belly had been home-braised, the cucumbers home-pickled, the sauces all made from scratch. Oh, and also the refreshing tomato soup. (And she makes all these cute signs to go with her stuff, too.) This is actually a signature of Jui’s; she explained to me later that she’d never consider entering anything that she didn’t make all the components of herself — and this stubbornness and skill is what produced the soymilk ice cream and sweetened soy bean toppings at the Tofu Takedown this past spring as well. DIY or die! (For the record, Jui is a teacher, and not of the culinary type.) 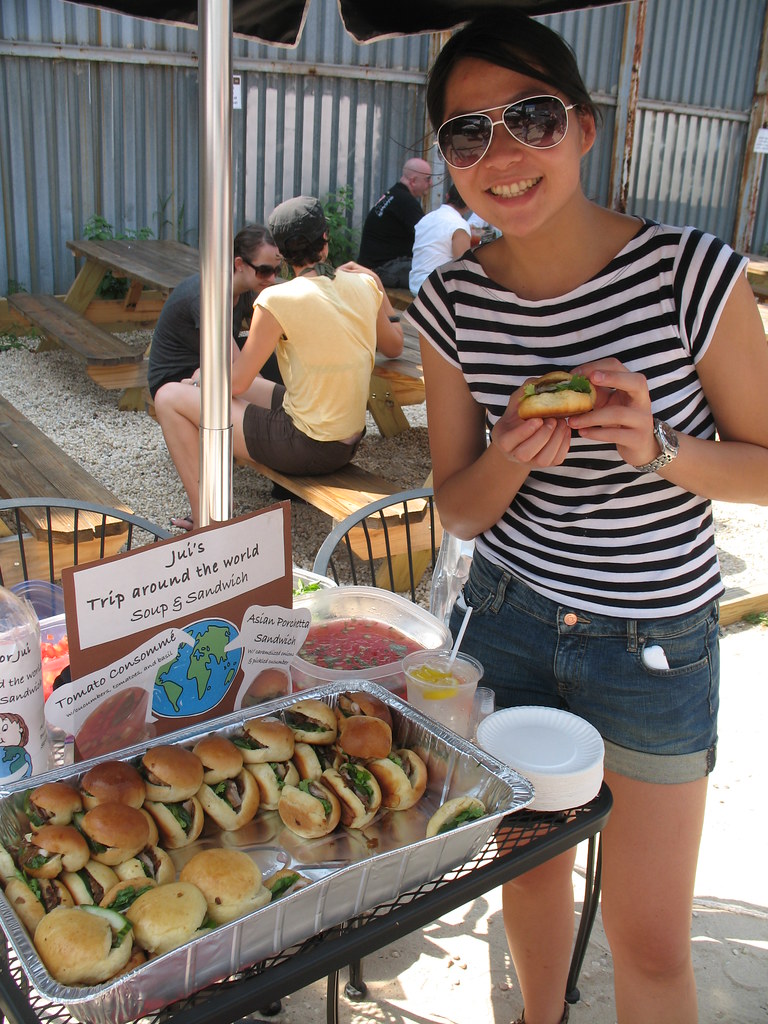 I think this cook-off proved once again why amateur food events are so fun: through blood, sweat and serious baking, everyone managed to serve up really great stuff in high spirits, to add. And the genuine creativity and charity of home cooks seems endless still. At least, that’s the tune I’ll be singing until the day I have to help make all those buns at the soup kitchen. But if you don’t have the patience and just want to cut straight to the filling, Jui’s provided some secrets to her souperdouper special, below.

for the roast pork belly:

Rub the garlic and shallot marinade on the meat and roll into a tight log with skin side out; secure with butcher twine. Rub outside with more olive oil and a few pinches of salt and pepper.

Preheat oven to 450 degrees. Place pork on a tray and roast for 15 minutes (optional: add some bones to the tray to create a more flavorful au jus for later). Flip once and roast another 15 minutes. Reduce heat to 350 degrees and roast for 2 hours or until the internal temperature is about 165 degrees.

Remove roast from oven and unroll. Glaze with more teriyaki and hoisin sauce all over. Deglaze the same roasting pan with some white wine and stock. In a saucepan, soften some chopped onion, carrots and celery in oil and add the deglazed roasting pan juices (along with any optional juices). Bring to a boil and let cool. Strain and reserve for drizzling on the pork slices.
for the pickled cucumber:

Thinly slice cucumber (unpeeled) on a slight diagonal angle. Sprinkle salt on slices and let sit about 15 minutes to draw out liquid. Drain, rinse and dry the slices thoroughly. Combine the white vinegar and sugar in equal parts. Add the cucumber slices, and garlic and fresh chili to taste. Cover and chill for about 30 minutes (or up to a day) to quick pickle.
for the tomato and cucumber consomme:
5 ripe tomatoes
2 teaspoons horseradish
2 tablespoons red wine vinegar
bunch of basil
1/2 clove garlic, crushed
salt and pepper to taste
1 cucumber, cut into cubes

Chop one tomato into roughly 1/4-inch cubes and reserve the firmest pieces for garnish. Blend the rest of the tomatoes and all the remaining ingredients except for the cucumber. Line a strainer with cheesecloth and set atop a large bowl. Secure cheesecloth at the top to a hook of some sort to hang above the strainer and let drip for about 2 hours.

Serve drained consomme chilled, with the cubed tomatoes and cucumbers for garnish along with a drizzle of olive oil.