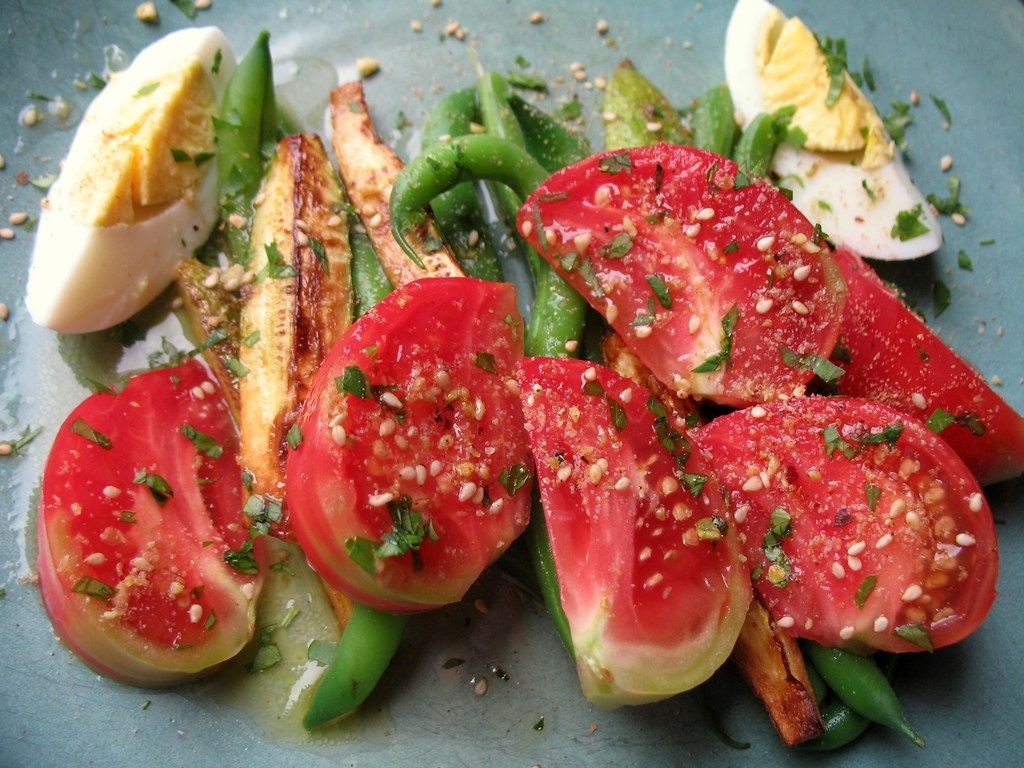 We’ve officially reached the “too hot to cook” threshold in NYC. Or for frequent home cooks, too hot to eat anything that isn’t cooked, and then chilled. Does cold food automatically equate a salad? I don’t know. If you have hot string beans, blanched and drizzled with olive oil, you don’t call it a salad. But if it’s the same thing cold, it’s a green bean salad. I fear this argument has no consequence, but to prove some state of heat-stricken delirium.


It’s too hot to think anyhow. Now, I’m not a raw foodist, and think most vegetables have a virtue for being uniquely edible raw, lightly cooked and stewed to death (i.e. collards). So I made a cold salad with a number of seasonal ingredients that were cooked — or not — to varying degrees. The heirloom tomatoes were by far the best part. Ripe and autumn leaf-pigmented, they’re so sweet and succulent raw, there’s certainly no cooking necessary. But if you do become bored with their flavor (and a lucky he or she who does, especially given this year’s devastating tomato blight), you can always sprinkle some interesting herbs or spices on them, like the Egyptian toasted nut and spice blend, dukkah. 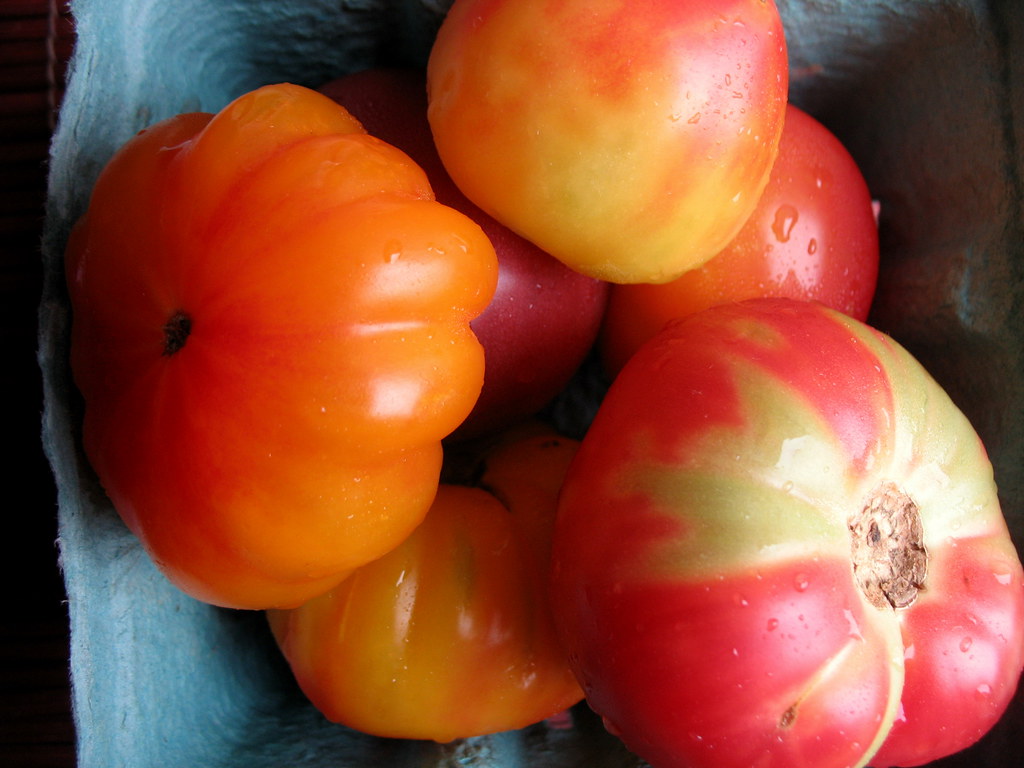 Before we get into the dukkah, just what makes a tomato “heirloom”? Is that a marketing term, invented to inspire romance, simplicity and rustic beauty when our eyes and ears chance upon it? The name connotes preciousness, and rarity. But actually, it’s a fairly honest, commercial-free word for the crops it describes. It’s basically any variety of a plant that didn’t make the cut to large-scale industrial agriculture some fifty years ago when it took hold of most of our food, for whatever reason (usually because they were harder to ship far or didn’t yield enough volume; ditto for “heritage” animal breeds). However, it was eaten commonly in decades past. So multi-hued tomatoes, with asymmetrical shapes and pumpkin-like pleating, are among those almost-lost breeds, now being re-embraced. (Further reading: check out Rob Smart’s recent diatribe on Monsanto’s clutch on our food system.) 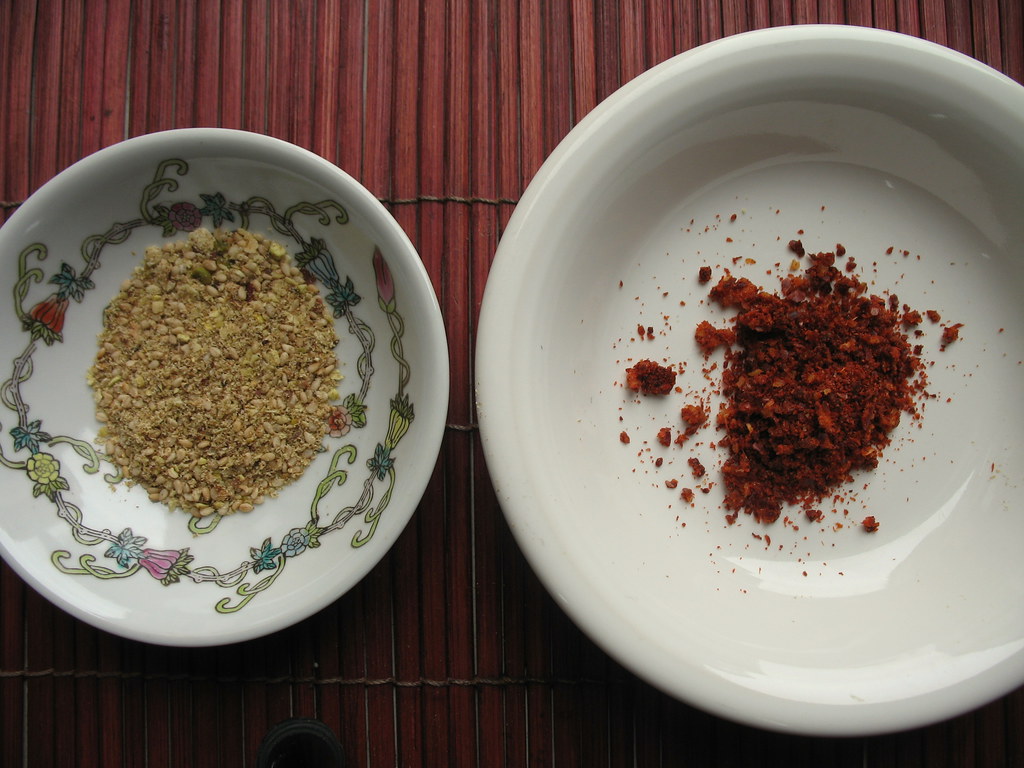 Not to be mistaken with dukkha, or the Four Noble Truths in Buddhism, dukkah is a spice blend originating from Egypt (don’t ask me if the pronunciation is any different). It has ground hazelnuts, pistachios, whole sesame seeds, and spices like cumin and coriander. It’s toasty and delightfully earthy sprinkled atop almost anything. I found a package of it from Juliet Mae Fine Spices & Herbs, thanks to Foodzie.com. Juliet’s mix is called “Classic Dukkah,” and unlike most of the spice mixes that you’ll find in this collection, it’s not really a spice you cook with foods—but spices that you sprinkle atop. Like a garnish that packs of punch of flavor in addition to texture. 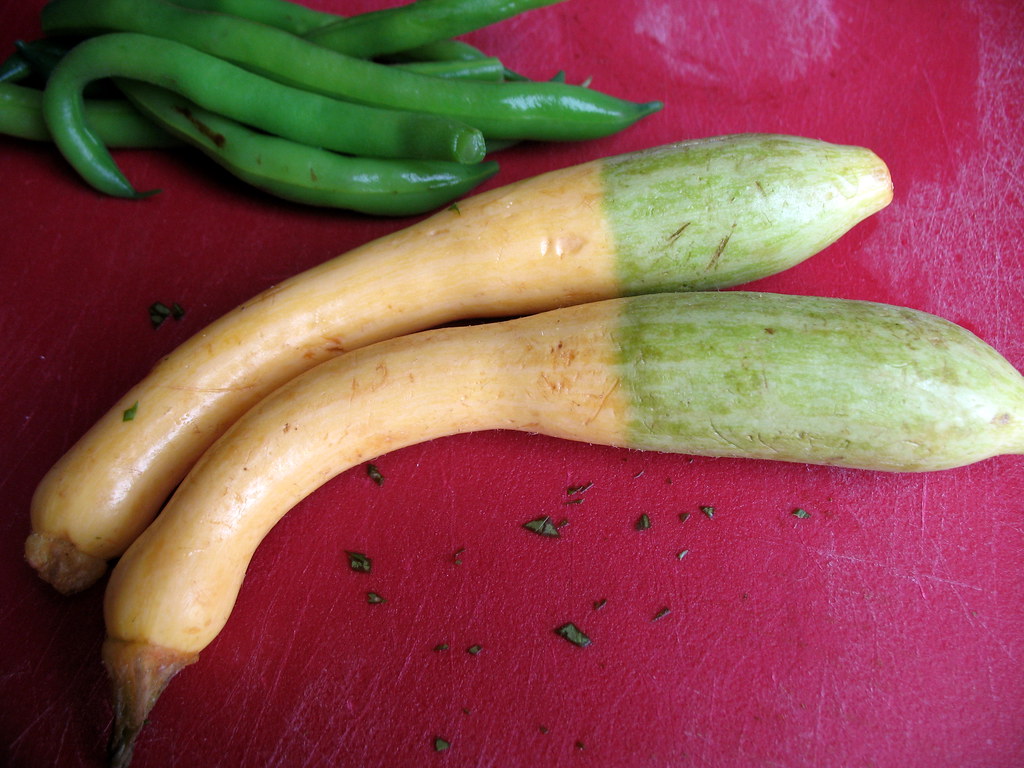 If you want to try your hand at dukkah-making at home, toast up a variety of nuts like those mentioned, as well as dry cumin, coriander and sesame seeds. And give it a fresh grind-up in your food processor, coffee bean/spice grinder, or mortar and pestle. Made at home, you’ll not only get the freshness but the ability to interpret the ratio of what spice to what as you wish.

Originally, I’d wanted to use a pack of dry harissa from Juliet Mae for this salad, but after tasting the smoky, spicy paprika-based Moroccan blend, thought it too overpowering for the delicate sweetness of fresh tomatoes. So I’ll probably be using that in other dishes, like savory meat stews and vibrant dips. In the meantime, I’m glad to have become acquainted with sprinkling dukkah on whatever seems fit — and I can’t think of many things that aren’t. Hence, this recipe is really only a suggestion, and can be made with anything that you may have on hand, whether fresh or cooked and chilled.

Bring a large, wide saucepan to boil and prepare an ice water bath. Blanche the green beans for 1-2 minutes, and remove with tongs and place immediately in the ice bath. Meanwhile, heat up a skillet with a tablespoon of the oil over medium-high heat. Once the oil is hot, place the zucchini/summer squash wedges and cook for thirty seconds to a minute to brown one side, seasoning with a pinch of salt and pepper. Flip over to brown the opposite sides. Turn off heat and let cook on its third side while it cools down. Drain green beans and dry.

Combine the lemon juice, remaining tablespoon of olive oil and a pinch of salt and pepper by beating briskly with a whisk. In a large bowl, combine all the ingredients except the dukkah and herbs. Arrange into serving plates and sprinkle the herbs and dukkah on top.

Two brownie points: A fresh salad, not being good for you? Strangely, it happens more often than we would like. Whenever a salad has tons of bacon, crispy or candied nuts, and cheese, it’s a calorie-whopper for sure. This one has a lot of fresh flavors, and a good variety of nutrients, too. There’s protein from the green beans as well as sole egg (with some cholesterol lumped in for the latter), and there’s Vitamin C, Vitamin A, fiber, folate and lycopene from the rest of the veggies — I tried to pick a pretty varied batch. With a round of crusty bread, there aren’t many things more satisfying nor nutritious.

Seven brownie points: These tomatoes were leftover from a private Hapa Kitchen dinner we threw in New Jersey, and were from Jersey’s own Cherry Lane Farm, via the Union Square Greenmarket. The rest of the produce was from my CSA farm, Sang Lee, and the egg, cage-free.