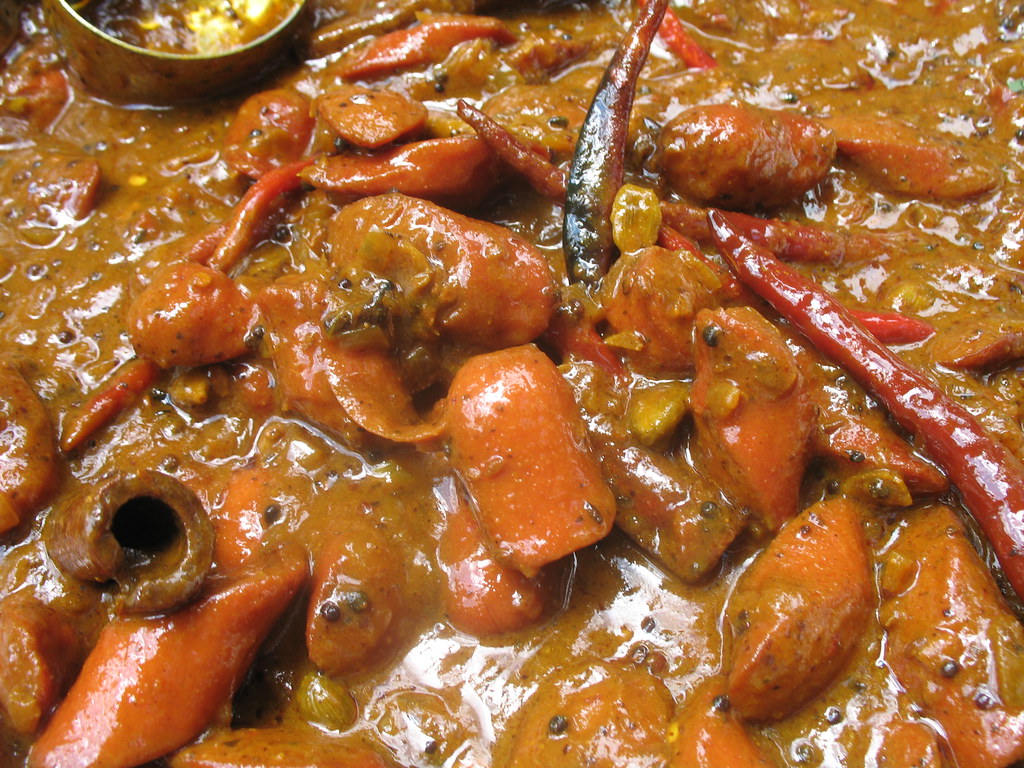 At the first-ever Curry Takedown, that is! And what a blend of spices we ate and smelled on Sunday. Forget the phrase curry in a hurry, these chefs were none to take the easy road, drop a Golden Curry cube into their pot and let it spread. What I saw was really a work of slow-simmered art — a United Nations of Currydom, convened at the Loki Lounge in Park Slope.


Chili Takedown founder Matt Timms’ sister Zoe works for the Women’s Education Project, a non-profit that enables women in South India to receive education. So it seemed natural to choose curry as the theme for a cook-off in its benefit. What is chili but America’s answer to curry anyway? Okay, maybe it’s not an exact translation. But even more so than the cowboy favorite, curry can be embraced with a multitude of meats, vegetables, spices and national cuisines. There was even one curry that played on the classic Takedown dish, a hybrid called “Cowboy Curry.” 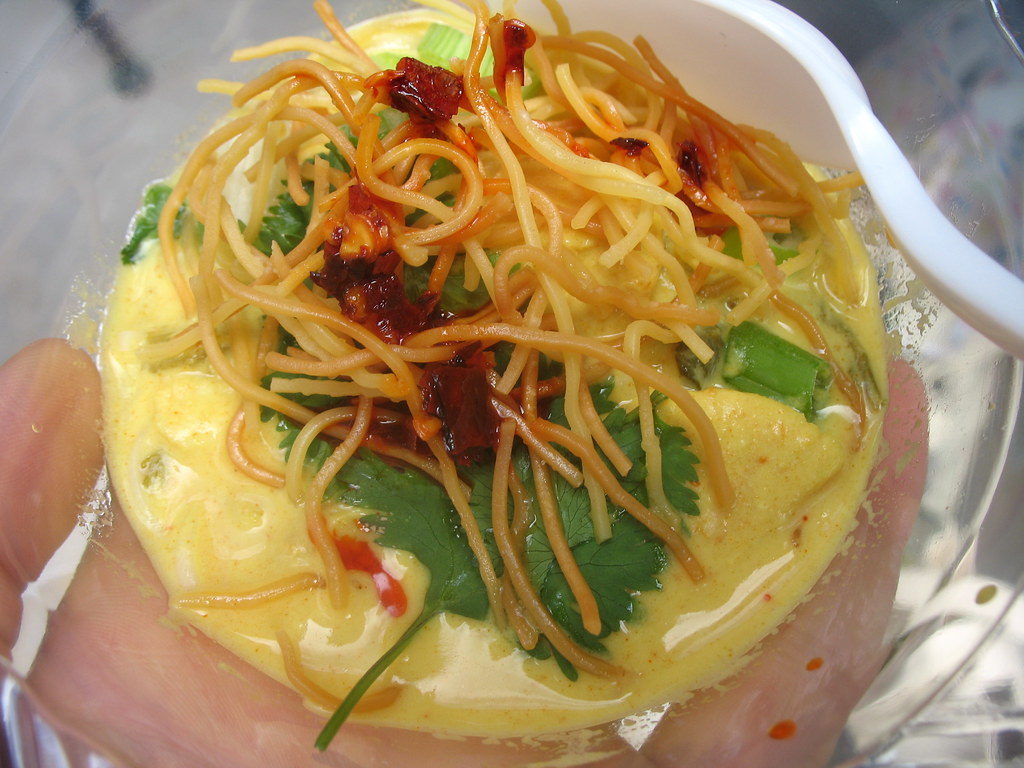 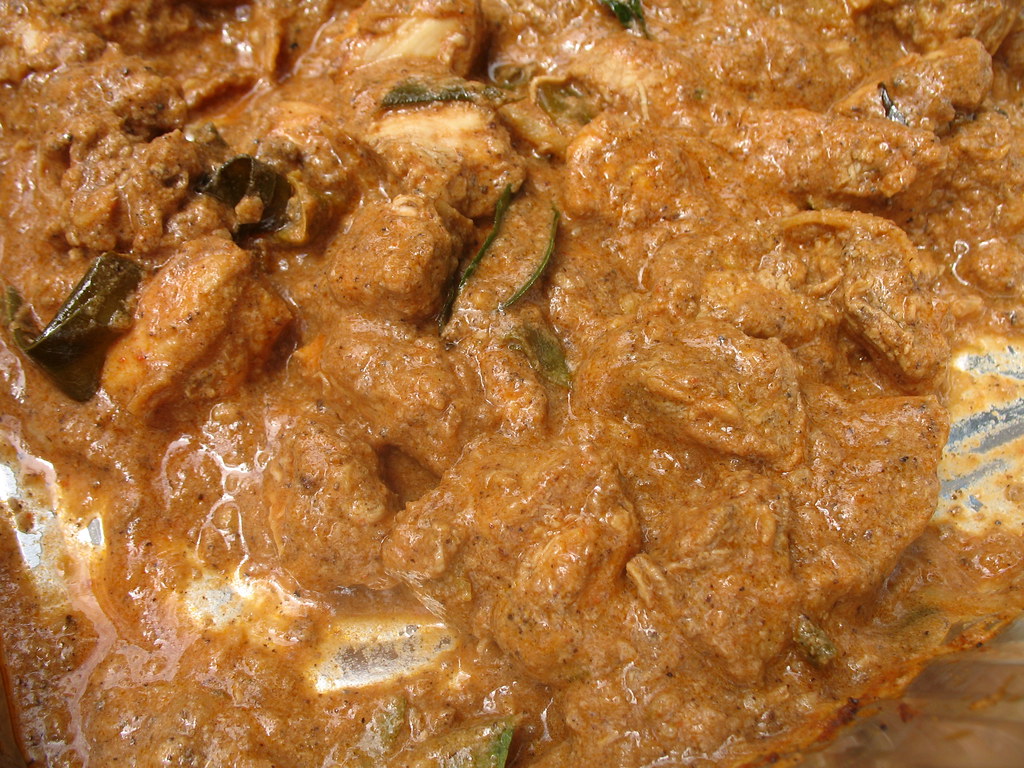 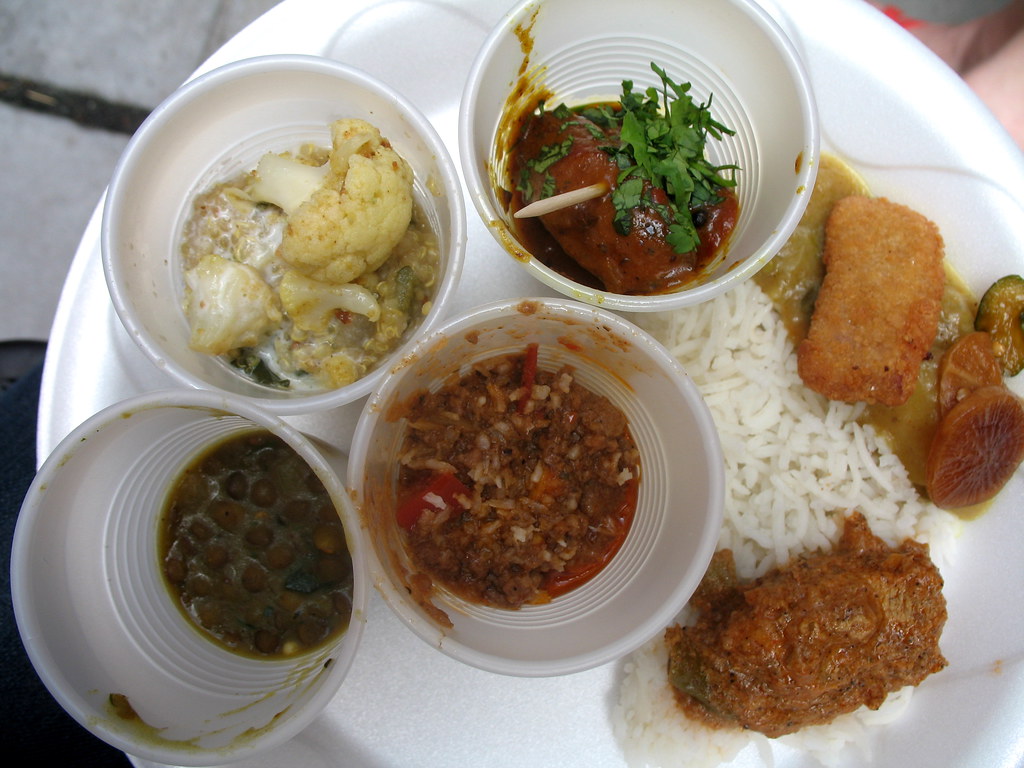 a loaded dish of spicy delights 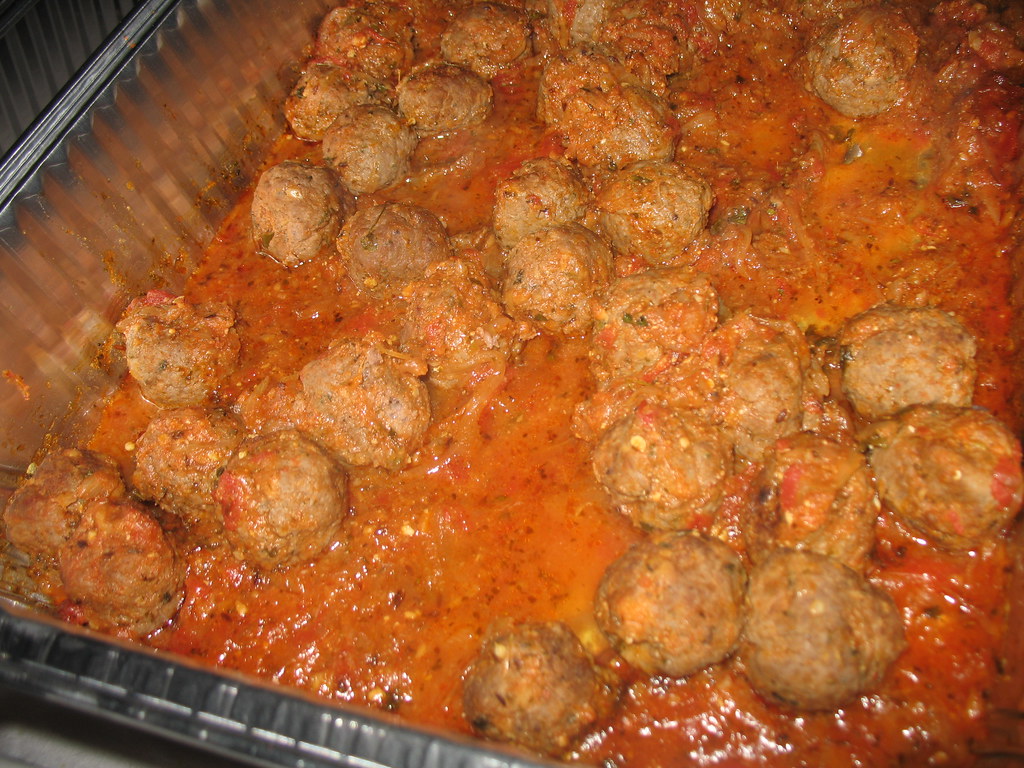 
I think we were all educated on curry on Sunday, women and men both. And then some not-so-classic adaptations: most creative in the field should definitely go to the team of Becca and Sam, who blended up fresh fruit for Sri Lankan curry smoothies on the spot (Sam) and baked Malaysian curry muffins to pair (Becca). Becca is a self-confessed savory muffin fanatic, so a curry batch seemed like a no-brainer. Local cookoff wunderkind Noah Berland turned Japanese for his two versions of curry with and without meat: a thick potato and pea Japanese-style veggie curry with panko-crusted bacon slabs deep-fried on location, and delicious pickled radishes and cucumbers for toppings. Mike O’Neill displayed his decidedly simple style (“this risotto has radish”) with an herbal lentil and okra curry, and veteran cook-off competitor Shana Wright returned on the scene with an interesting blend of quinoa with cashews, peppers and her own “coconut creme fraiche” made of coconut milk and buttermilk. 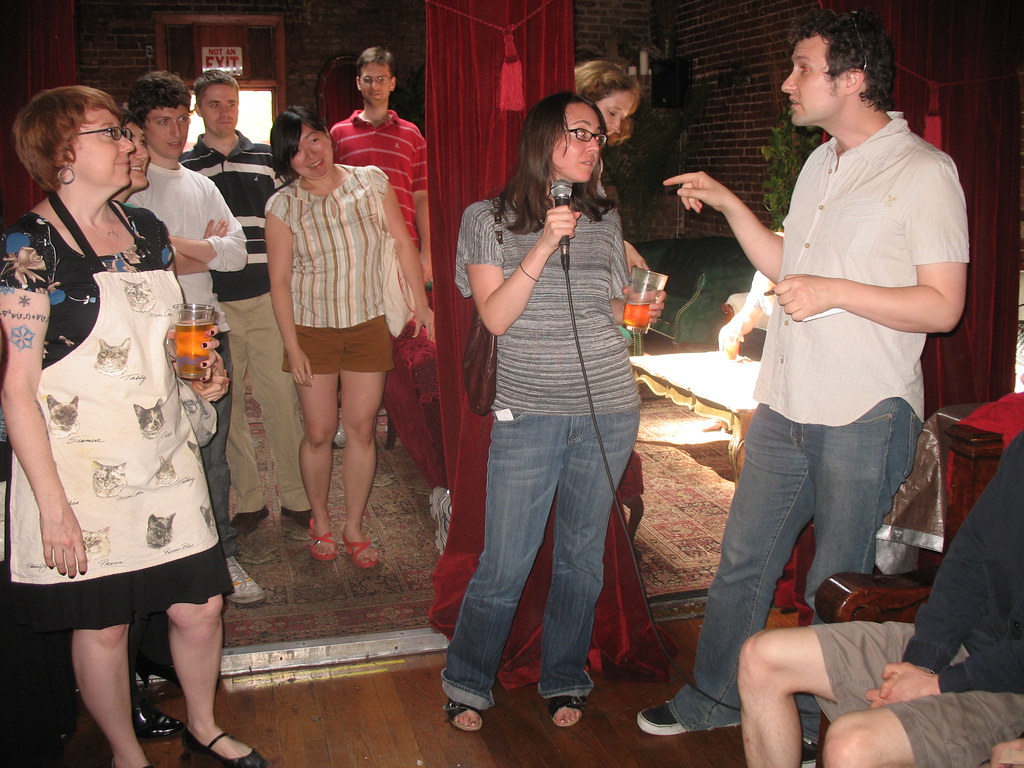 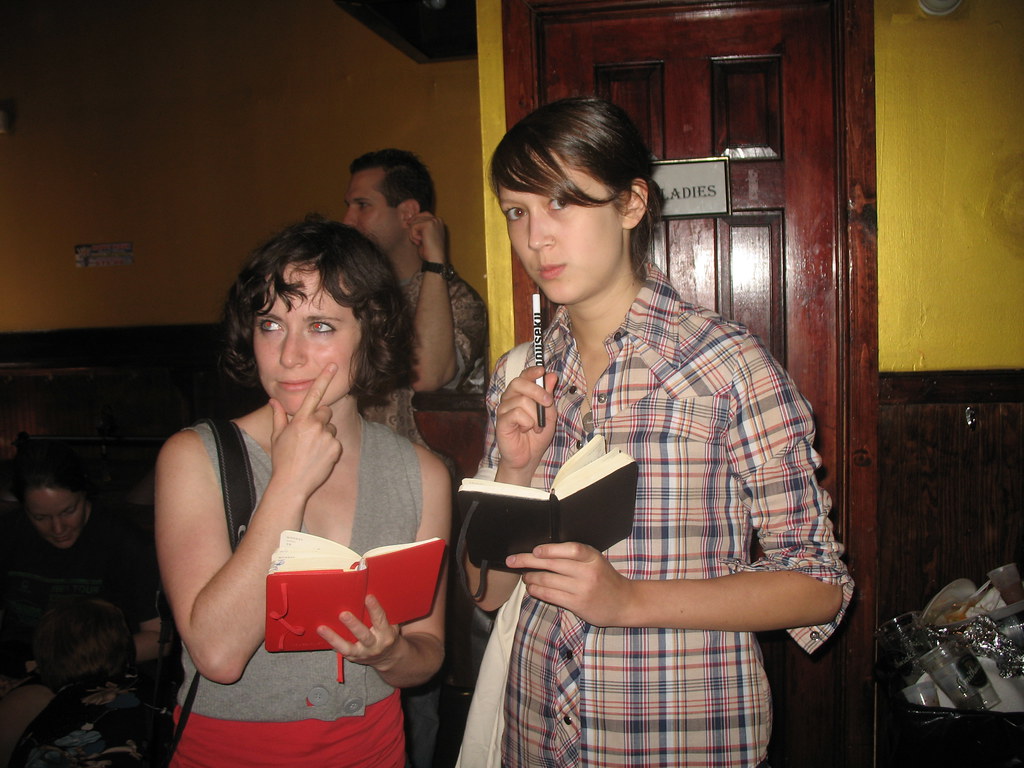 I got to judge. Joining me in the judges’ decision was Keavy Landreth, of Kumquat Cupcakery. We had four prizes to give away, and ultimately awarded them to…

A newcomer prevailed! For Kate’s first attempt at making Garam Masala, she slaved over two versions of her entry: one with the unusual (but, we decided, delightful and innovative) choice of cocktail wieners, and one with the same spices, and tofu. We loved the universality of the duo, but were impressed by the bold spices in them the most. Her curry is pictured at the top of this post, with hunks of cinnamon stick and red chiles afloat. Some people complained of getting a blast of whole coriander seeds or something with their bites, but if you ask me, it’s a Curry Takedown, and frankly, I want to get my mouth bombarded with cardamom pods and such. She also topped each portion with a generous pinch of fresh, finely chopped cilantro for garnish. Brava! (And she’s offered her recipe, below!) 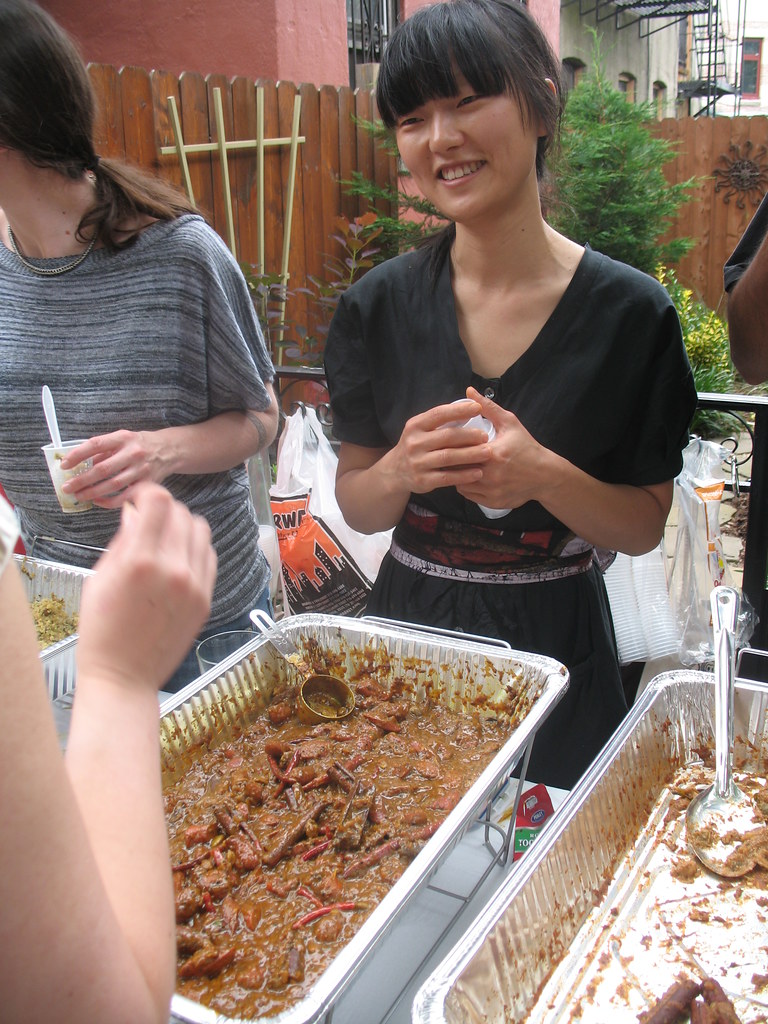 Next, the audience spoke:

It was a really close match. And there were so many delicious curries to go around not mentioned. I will have to attend Geetika’s classes sometime to figure out how she made those meatballs so tasty, and check out the book and spices by Skiz (who was, for all his reputation, unflinchingly gracious despite not placing). Hanging out with some of the contestants and eaters for the rest of the afternoon, it was agreed by many that this was one of the nicest cookoffs they’d attended, with neighboring contestants offering a hand at serving when one had to run to the bathroom, and generally making the whole affair a friendly, fun competition. And thanks to everyone’s donations at the door, the Women’s Education Project received close to $1,000 in extra funding. Bravo, brava. 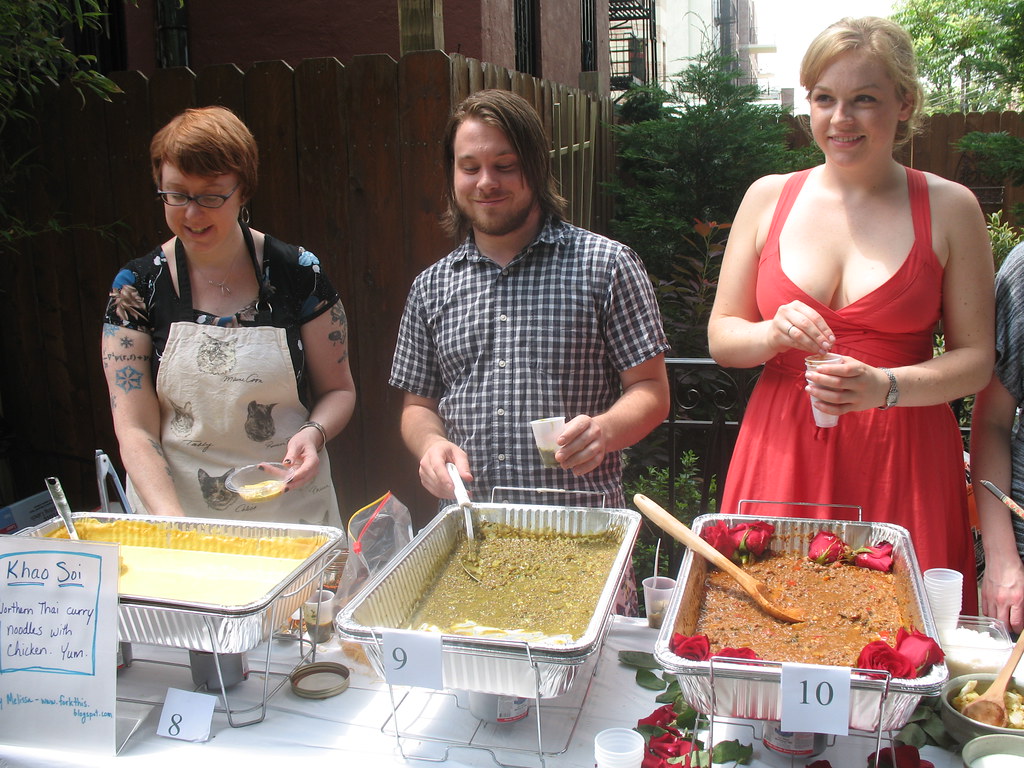 Preparation
Pour  tomatoes with liquid in a heavy bottom pan. Salt lightly
Break up the tomatoes.
Bring to boil, then turn down to simmer until tomatoes are soft and juice is absorbed.

Preparation
1. Heat the oil in a large nonreactive saucepan over medium heat. Add the onion and garlic, and cook until softened but not brown, about 4 minutes.

2. Stir in the ketchup, tomato sauce, cider vinegar, Worcestershire sauce, hot sauce, molasses, brown sugar, prepared and dry mustards, black pepper, and 1 cup of water and bring to a boil. Reduce the heat to low and let the sauce simmer, uncovered, until thickened, about 15 minutes, stirring often to prevent scorching. If the sauce becomes too thick, add a little more water.

3. Remove the barbecue sauce from the heat and taste for seasoning, adding salt to taste and more cider vinegar, hot sauce, and/or brown sugar as necessary; the sauce should pack a punch with first taste.

III. MASALA
Variation based on recipes by Julie Sahni and Madhur Jaffrey

(I wanted to grind the spices, but food processor didn’t quite break it up enough, but I would recommend it if you have a coffee grinder, to grind it at this point.)

1.    Preboil the weiners in water for a couple minutes so the sauce doesn’t get too hot-dog taste infused. Set aside.
2.    Heat the fat until sizzle-hot. Stir in the masala seasoning, and cook until it smells right
3.    Add the onion and cook them until they’re soft.
4.    Sprinkle in turmeric. Add the weenies and sauté for 3-4 minutes.
5.    Pour the barbecue sauce in the crockpot, followed by the contents of the pan. Simmer for at least half an hour and up to 2 hours or more.

Or the tofu…
Six parts I guess if you’re making meat and veg version and you’re keeping count….

1.    Freeze it. Then defrost it, either in the microwave or in the fridge overnight.
2.    Cut into cute cubes.
3.    Squeeze out as much liquid as you can by pressing tofu between two cutting boards or by hand, (or however you can) so the tofu will more readily absorb the sauces.

Total cooking time: You’ll probably want to make this a day ahead.