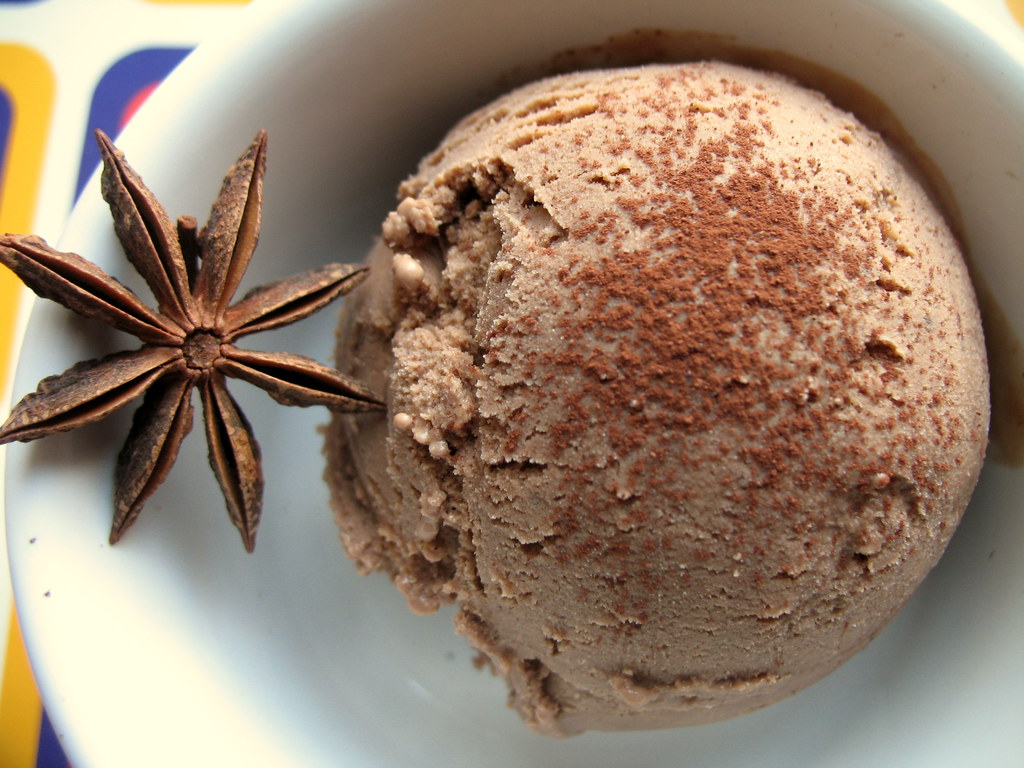 I have a new catch-phrase for the week: that “I erred on the side of awesome.” Like the guy who made bubble gum. I didn’t invent anything earth-shattering, through scientific debacle, but when something was underestimated in this particular batch of ice cream, it made it all the better. That’s a nice surprise.


My favorite ice cream base ratio had been very simple: a cup and a half each cream and whole milk, 4 egg yolks. Adjust if your flavor addition is rich or liquid-y. Neither five-star anise (steeped in the milk just like vanilla bean) nor unsweetened cocoa powder would turn the tables, so the recipe seemed routine. Except when I got to my third cup of half-and-half, the cup measure only filled up a few drops. There was no more of it left, the dairy was more than half a cup short of recipe, and I had already beaten my four yolks with sugar. Pushing ahead anyway, I ended up with the smoothest, creamiest, most custardy and intensely flavored ice cream I think I’ve ever made. The chocolate and anise combo is really something special, too (provided you like anise). 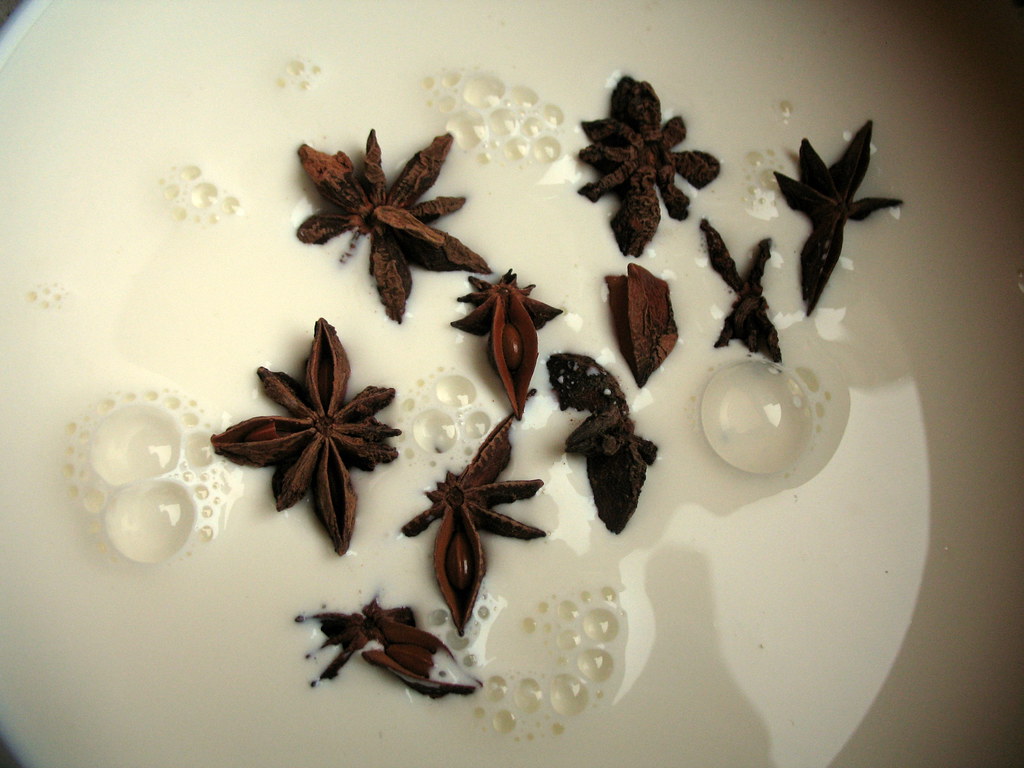 five-star anise about to steep in milk and cream

There are proponents of as many as 9 egg yolks to a quart and but I find this unnecessarily excessive and far too rich for my blood. This topic came up in conversation at a recent party, where I was pleasantly surprised to find that I was not the only homemade ice cream-making obsessive (the other tinkerer was no less Kerry Trueman). Ice cream, gelato and frozen custard may be once-in-a-while treats, but if you can create them without frightening fat levels, why not? I always say. Well, I guess one extra egg yolk to a quart can’t hurt too much, and really, it made an impressive difference in the finished scoop. New standard formula.

Eggs aside, a note on this recipe’s main ingredient: milk. Small dairy farms are in a dreadful state. For all the appreciation of their artisanal products, around the country, these small dairy farms are basically closing down like crazy, unable to compete. At the same time, organic dairy operations are losing the battle, too. As described in this recent New York Times article, organic milk distributors like Horizon are scaling back operations and not renewing the contracts of many of their dairy farm suppliers in response to softening demand. This is clearly a pricing issue, since organic milk sales had been growing pre-recession, when so many of these farmers decided to make the switch to organic. And this is a Catch-22 of morally responsible eating — there is the desire, but not always the funds to do so. I just wish it weren’t the small farms who are paying for the public’s inability or unwillingness to buy the product. (Don’t you just feel guilty now! By the way, if you read the sob stories about some farmers in that Times article, there are decent ways distributors are handling the scale-back, like ensuring the same prices for milk while requiring farms to reduce their output.)

I am not a fluid milk drinker, so I don’t buy milk all the time. Rarely, in fact. Given this, I’ll happily spend the extra on organic milk. But it also means that I’ve got to finish it, before it goes bad. So whenever there’s a half-carton left and it’s about to turn for the worse, I turn it into ice cream — definitely for the better. And that’s exactly what I was doing with this quart of half-and-half, incidentally Organic Valley.

This is a childishly facile, naïve, infantile daydream, but since I’m on an ice cream high, I wonder: instead of thinning their herds, what if all organic milk farms and suffering small dairy farms simply made ice cream with their excess stock, too?

Combine the milk and cream and add the five-star anise and cocoa powder in a medium saucepan. Bring just to a boil, stirring, then reduce heat to very low and continue heating for 20 minutes, without any boiling. Turn off heat and keep covered another 10 minutes. Remove the five-star anise pieces from the milk.

Beat the egg yolks with the sugar until light in color and fluffy. Temper the egg yolk mixture by adding a small spoonfuls of the hot milk mixture at a time, while whisking, until about half a cup has been added. Transfer the egg mixture to the milk mixture in the saucepan and stir constantly while cooking over medium heat until the mixture is just thick enough to coat the back of a spoon (about 8 minutes). Do not let boil. Chill in an airtight container overnight. Follow your ice cream maker’s machine to churn the ice cream.

Eight brownie points. The “health factor” of an ice cream recipe is sort of taboo any way you slice it. It’s rich in calcium and it’s got some protein from those (extra) egg yolks, but bottom line, enjoy it in moderation (unlike I did the first night).

Six brownie points: So this half-and-half, purchased at the supermarket one day for some purpose that I cannot remember, was organic. However, it was not necessarily local and as admitted, not very fresh. In any case, I’m sure anyone could tell in a blind taste-test that fresh milk from pastured and/or grass-fed cows on small, local farms is not only greener, but tastes better than conventional. So when you’re making something like ice cream, it really pays. Same goes for the yolks.