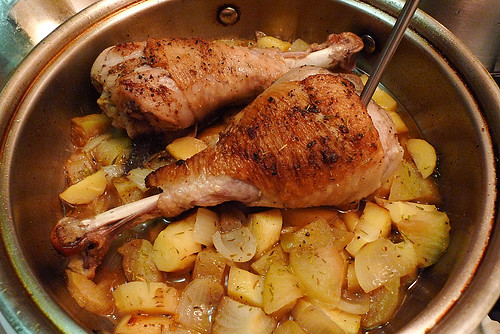 A couple months ago, I was given a challenge: cook a “date meal” for two that costs $15 or less, including a bottle of wine. It was thrown to me by a local newspaper that has yet to publish the story, and I suspect they might simply never. Which is fine, but it would be a shame not to share the recipe for the entree, while its wintery ingredients are still lingering around.


At appearances last week, I listened to Michael Pollan counter the argument that the local and sustainable food movement is largely an elite one, and that only those willing to spend extra for food at farmers’ markets can participate. He had several good answers; one, that it’s a very young movement, still at the artisanal level. Many more had to do with current government policies. You can hear or read more about these and other fascinating insights, but in the meantime, I thought I’d challenge that notion, too. Because the meal I made for two people, consisting of three courses and a bottle of wine, ended up costing me less than $12. And all the food was organic or purchased from the Greenmarket.

How did this happen? While surveying Union Square Greenmarket that day, I really didn’t think I had it in my budget at first to make a main course with meat. Or at least, meat that wasn’t ground (which doesn’t strike me as very romantic or date-like). I passed a few grass-fed beef and pastured pork farm stands with a sigh. Then I came upon DiPalo’s turkey farm stand, and saw a sign advertising a special on turkey legs, backs and wings — $1.89 per pound. 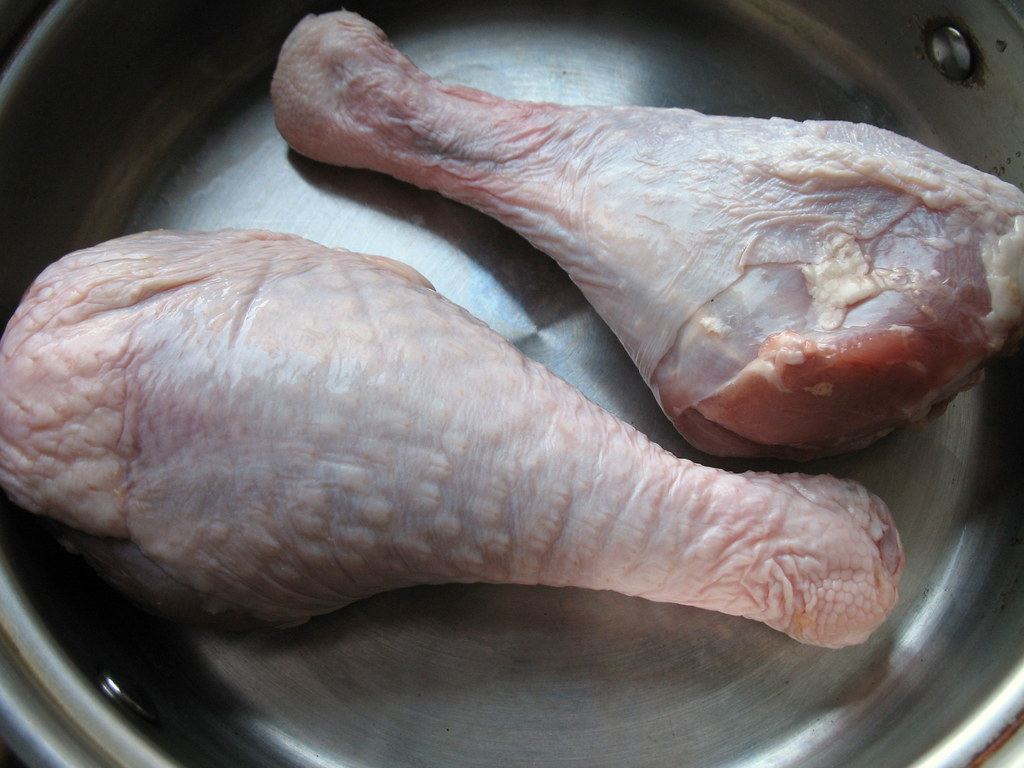 So Tip #1: Buy less popular items from small farmers, and be on the lookout for sales. For one reason or another, a sale indicates a vendor is trying to get rid of something that hasn’t sold so well. As for turkey legs, I just don’t get it. Drumsticks are one of the best things about poultry, period. Their meat is moist, unctuous, and fun to eat because it’s a big ‘ol barbaric hunk of meat with a handle! Nevertheless, it was $1.89 a pound, and with two meaty legs in tow, my main course was set. I thought they’d make an impressive enough centerpiece for the dinner plate, and be suitably filling for the male species. 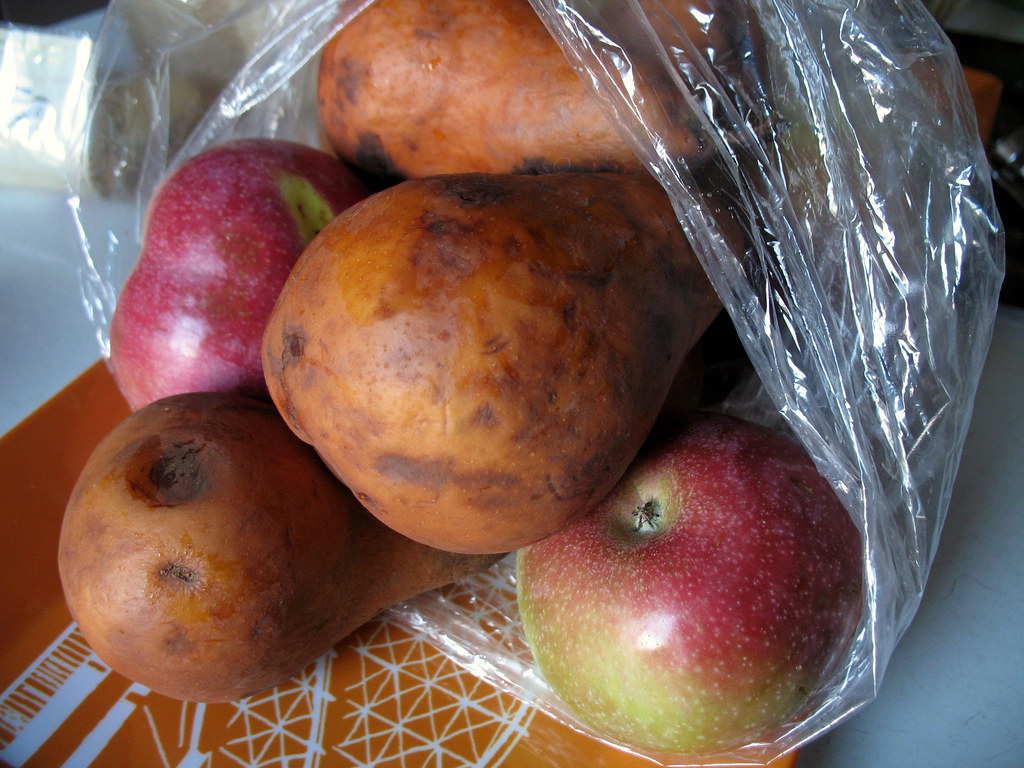 bulk apples and pears at $2 a bag

Tip #2: Buy in bulk. Similarly, farmers often bag together slightly bruised, or less fresh produce in great big bags for under $5 a pop. They’re always around, and at Locust Grove farm stand that day, a bag of twelve apples and pears mixed together set me back $2. As mentioned in this post, bruised fruit might not be the most eye-catching ones at the stand, but they’re great for purposes other than just crunching into fresh. I planned to cook with the worst of the apples and pears in this lot, and had plenty of crisp ones to eat alone throughout the week. 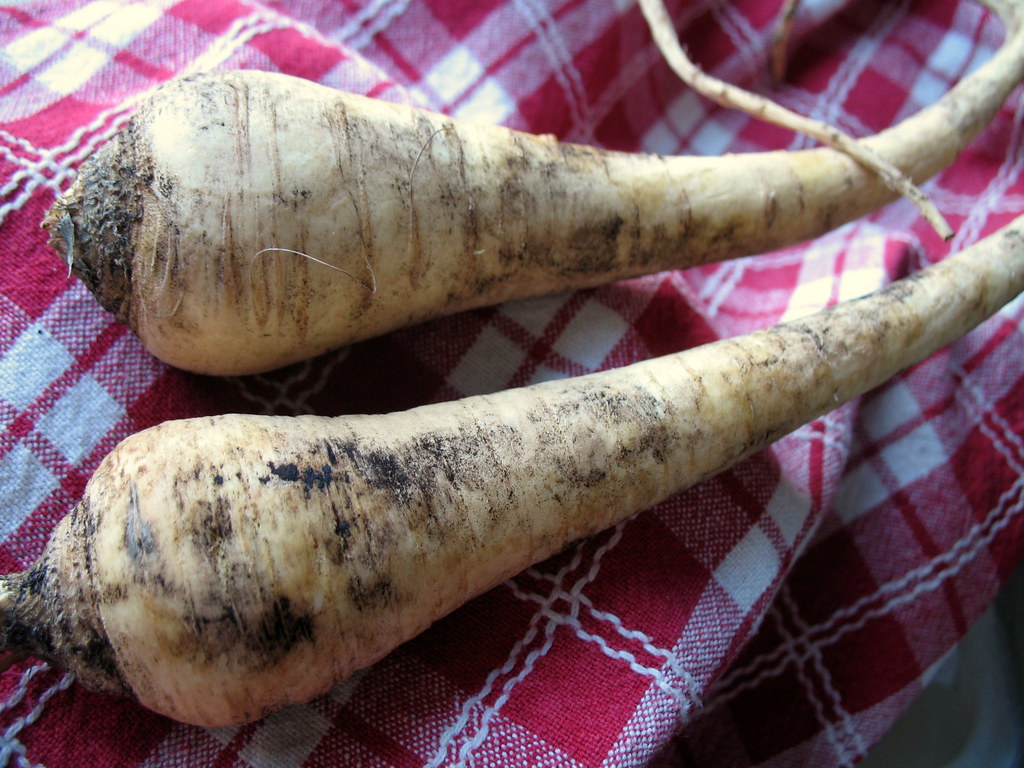 Tip #3: Simply buy cheaper produce. No one says you have to get delicate spring greens that cost upward of $4 a pound, and expire after a few days in your crisper, every time you shop at the Greenmarket. You don’t actually have to eat them at all. I got cabbage, perhaps my all-time favorite cheap foodstuff: it’s healthy, it’s versatile and really cheap. I also picked up parsnips and carrots, and a bunch of beets — root vegetables with a pretty low pricetag. Plus, they keep really long in your crisper. 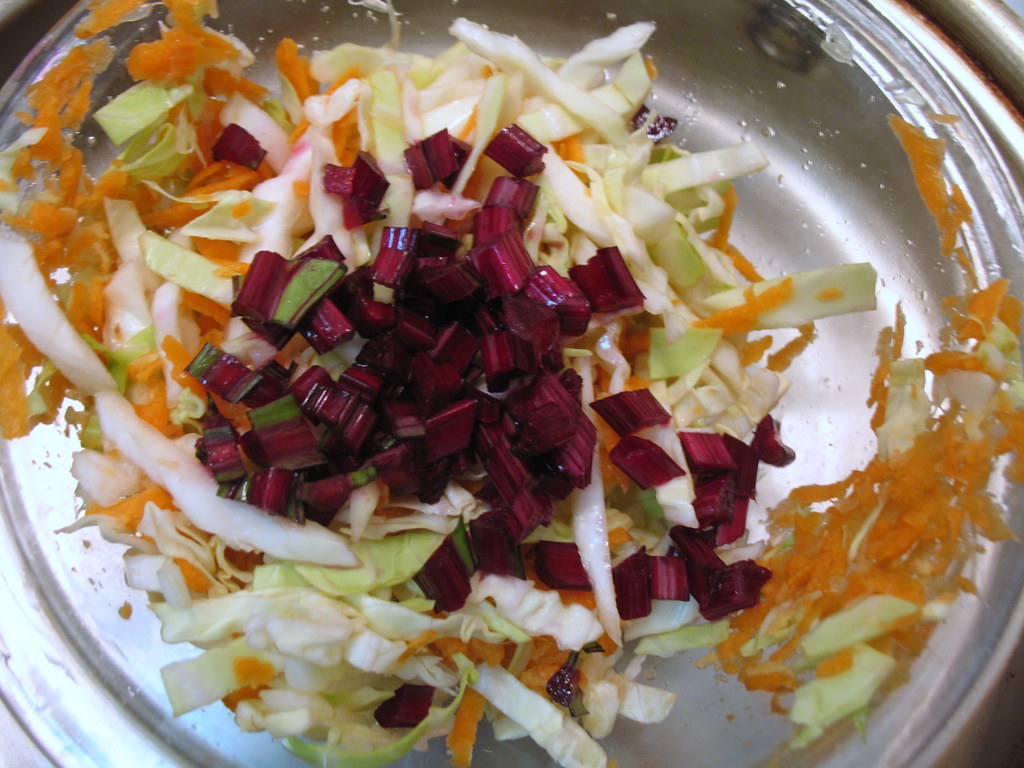 a touch of beet stems add to the slaw

Tip #4: Use all parts of the plant or animal. For the salad or appetizer course I made a gingery cabbage, carrot and apple slaw (much like this one) and rolled it up with beet leaves as a sort of fresh spring roll. I included some chopped-up tender stalks from the beet greens in the slaw, too. They look like miniature versions of rhubarb, and have a crisp grassy bite sort of like celery. Why not? 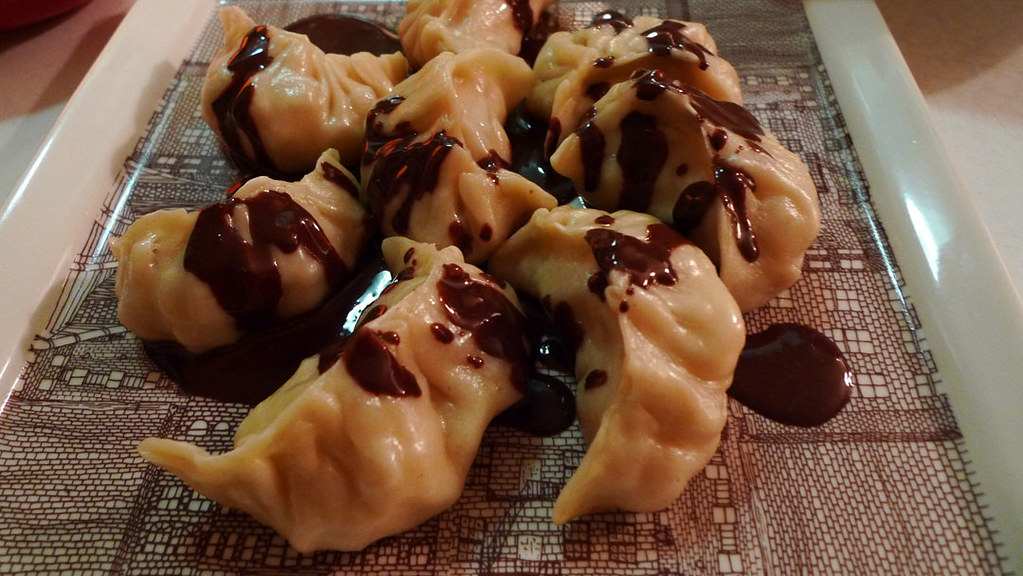 Tip #5: Do it yourself. This is an umbrella statement, for sure, (the mothership of the entire blog you’re reading, in fact), but the reason I was able to make dessert with my budget is because I used just one pear from that $2 bag, and less than a cup of flour for homemade pear dumpling dough. And a bit of sugar. And for extra, date-worthy flair, I melted a small bar of Green & Black’s organic dark chocolate with a pat of butter and drizzled the chocolate sauce on top. (Had I not splurged for the chocolate bar, the meal would have cost closer to $10 in total.) I’m sure it’s not everyone’s forte — kneading homemade dough and pinching the dumplings shut with pears inside — but I’m sure there’s something everyone is good at making themselves, or can become good at it after a few tries. Homemade tomato sauce? Crusty bread? And if you want to give the dumplings a shot, here’s a similar recipe for apple ones.

For the wine, I simply bought a bottle of “three-buck Chuck” Chardonnay from Trader Joe’s and called it a day; this was not organic nor very local (a fascinating article about this wine brand and its recession-era rise is in last week’s New Yorker). But, it was three dollars. Done and done.

The main course came out surprisingly tasty given how few ingredients were used. The legs were seared in a single pan, and removed and the coarsely chopped apples, peeled parsnips and onion wedges given a few quick turns in the same pan. All was rearranged back in the pan, the legs nestled into the vegetables, and roasted until they were cooked through. I reduced some juices in the pan that had spurted mostly from the apples, and served it all on a bed of “10-second polenta.” The photographer who stepped into my apartment for the paper loved it so much that when I ran into him last week (at the cupcake cook-off) he admitted he’d tried to replicate it himself. Since you aren’t limited to a $15 budget, though, feel free to add anything else you’ve got. I’d wanted so much to sprinkle fresh herbs on top.

The most intimidating factor of this foodie challenge, for me, actually had nothing to do with food. It was the “date.” I certainly wasn’t going to slave over a two-person meal and pack up the rest for leftovers. It didn’t seem right since a photographer was coming to my home to invite a girlfriend over for food, either (and a girls’ night dinner seems to suggest a whole other set of food, ice cream, for sure). But a deal was a deal. I took the easy route and invited my incredibly charming, talented and up-for-anything pal Gino instead. No pressure, just an awesome meal, laughs and lots of wine (he brought an extra bottle!). Good times.

Preheat oven to 350 degrees. Pat drumsticks dry with paper towels and rub with a few pinches of salt, pepper and cayenne pepper. In a heavy-bottomed, oven-safe skillet with a lid, heat the oil over a high flame. Place the turkey legs down and reduce heat slightly. Let cook 1-2 minutes or until gently browned on bottom (do not turn legs until checking). Flip with tongs and brown the opposite sides for another 1-2 minutes. Add the onions, apple and parsnips to the pan. Let cook for a minute, stirring occasionally. Season with a few pinches of salt and pepper. Cover pan with the lid and transfer to the oven. Cook approximately 25 minutes, depending on the size of the drumsticks, or until the internal temperature of the thickest part of the drumstick reads 180F.

Meanwhile, bring two cups of water to a boil in a small saucepan. When water begins to boil, reduce heat to a simmer and stir in the cornmeal while whisking rapidly. Continue whisking for about 2 minutes, or until mixture is smooth and about the consistency of a thick custard. Season with salt and pepper to taste.

Distribute the polenta (cornmeal mixture) evenly among two serving plates. Arrange the turkey drumsticks on top of each plate of polenta. Scoop the apples, parsnips and onion from the pan with a slotted spoon and arrange around the drumsticks. Return the pan to the stove and bring pan juices to a boil. Simmer, stirring and scraping up any browned bits from the bottom of the pan, until sauce is reduced to about one-half, or is thick as gravy. Taste for seasoning, adding additional salt and pepper if desired. Pour sauce over each plate and serve immediately.

Five brownie points: I didn’t cook with copious amounts of butter or oil, and let the flavor of the free-range turkey meat do the magic on its own. I think you’d be surprised how much flavor comes out of those legs, keeping the skin on and its dark meat juicy by covering it in the oven. You can chalk up some of that flavor to the free-range bird itself, too. Likewise, I didn’t butter up the polenta with cheese or cream as the savory and sweet reduction sauce will coat everything, but you could go there if you’re a polenta purist about such additions. The parsnips and apples in it also do well to fortify your fiber and potassium, among other valuable nutrients.

Eight maple leaves: Except for the cornmeal, the ingredients were found at the Greenmarket and can be at most times of the year. Happy shopping!