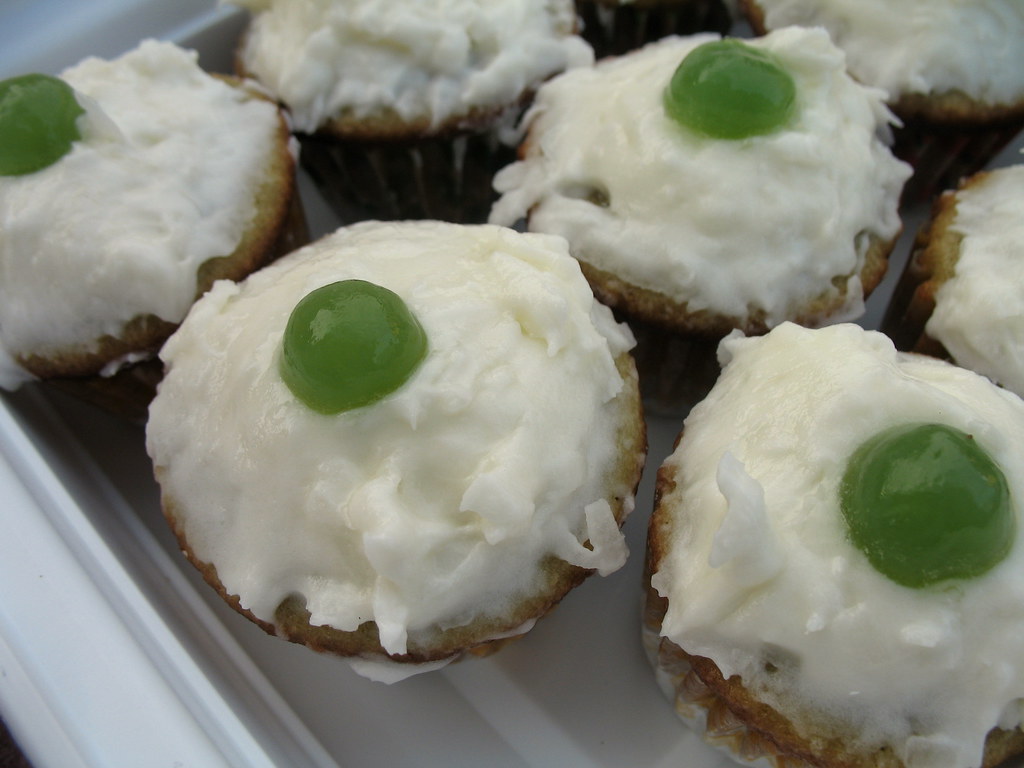 Now if only I could miniaturize myself after this string of cook-offs the past two weeks. Brooklyn Kitchen‘s 3rd Annual Cupcake Cook-Off, held Monday night at Union Pool, was the last straw — yes, the Risotto Challenge is still on, and yes, it will be still awesome, and will help raise money for our friends at Just Food. But until then, folks, I’m staying away from the trays and snaking lines of homemade eats for a while.


This is my parting gift, then, for the next two weeks (until May 23rd). For this cupcake cook-off, I was neither a judge nor an organizer, just a plain old, regular contestant. But I still wanted my cupcakes to be anything but. Dreaming of tapioca bubble-bottomed cups of lychee-sweetened, cool green tea, my original intent was to merge these two flavors in a cupcake: green tea cake, lychee frosting, bubbles on top. Fun all around. But running around from Tofu Takedown to baking mode did not allow for a trip to Chinatown, to get lychees. I ended up swapping in coconut, which was tasty but ultimately less exciting, in my mind at least. I almost didn’t even make them, either — from starting to beat the batter at 5pm and dashing into a cab at 7, I arrived at the cook-off five minutes late, with these bite-sized guys safely in tow. 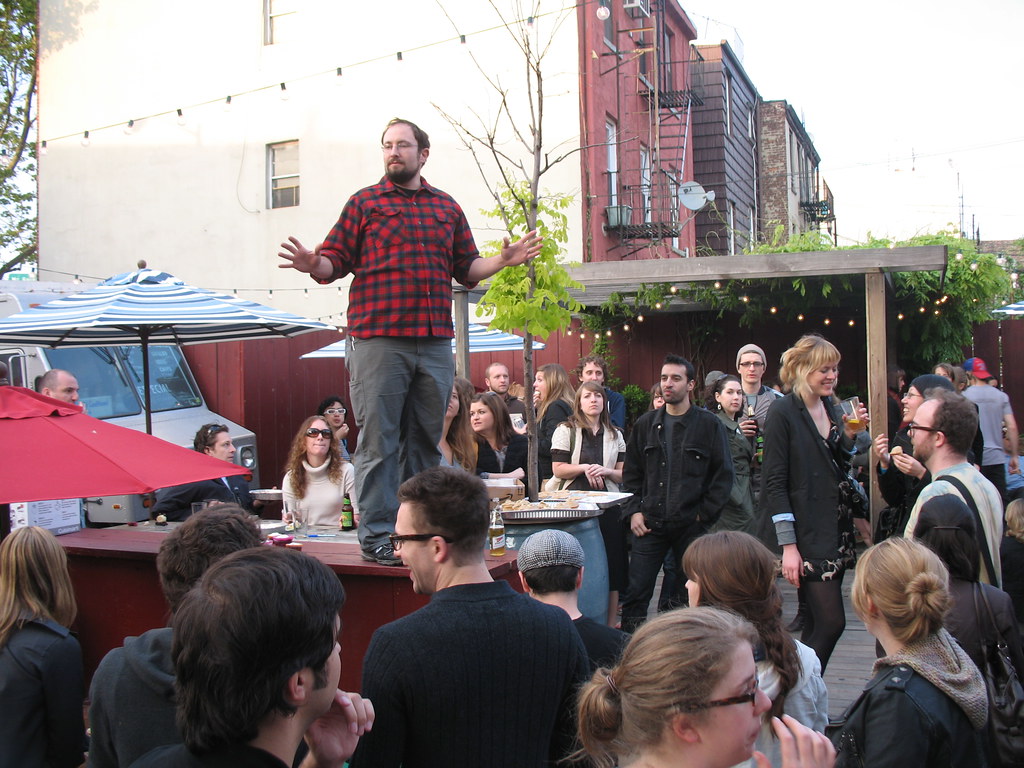 I am just happy to have survived. The back patio of Union Pool was already akin to Willy Wonka’s chocolate factory by then with its parade of eye-catching cupcakes. Each frostinged creation was wildly different, decadent, and begged you to taste it, or at least take a photo of it. I did both. 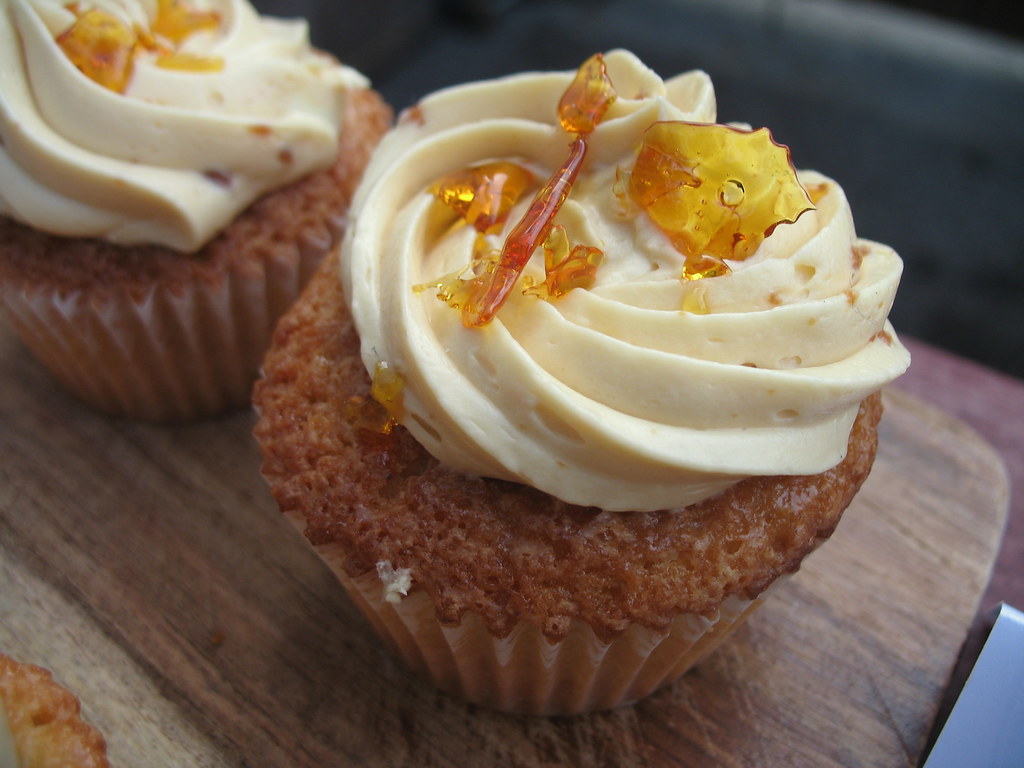 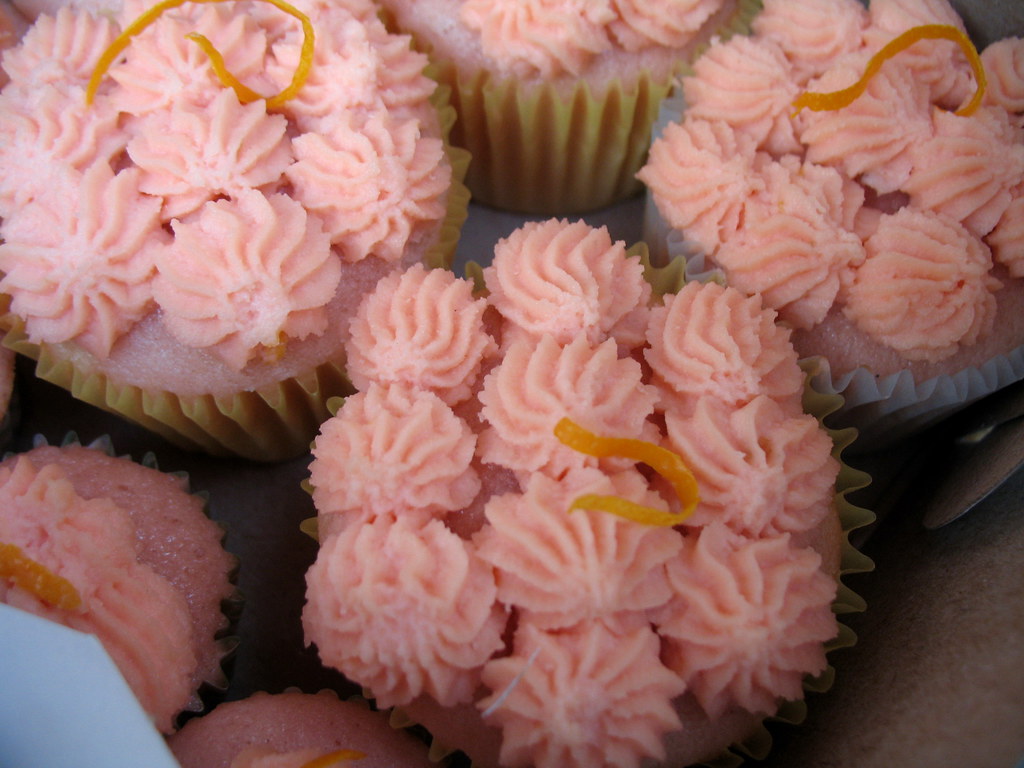 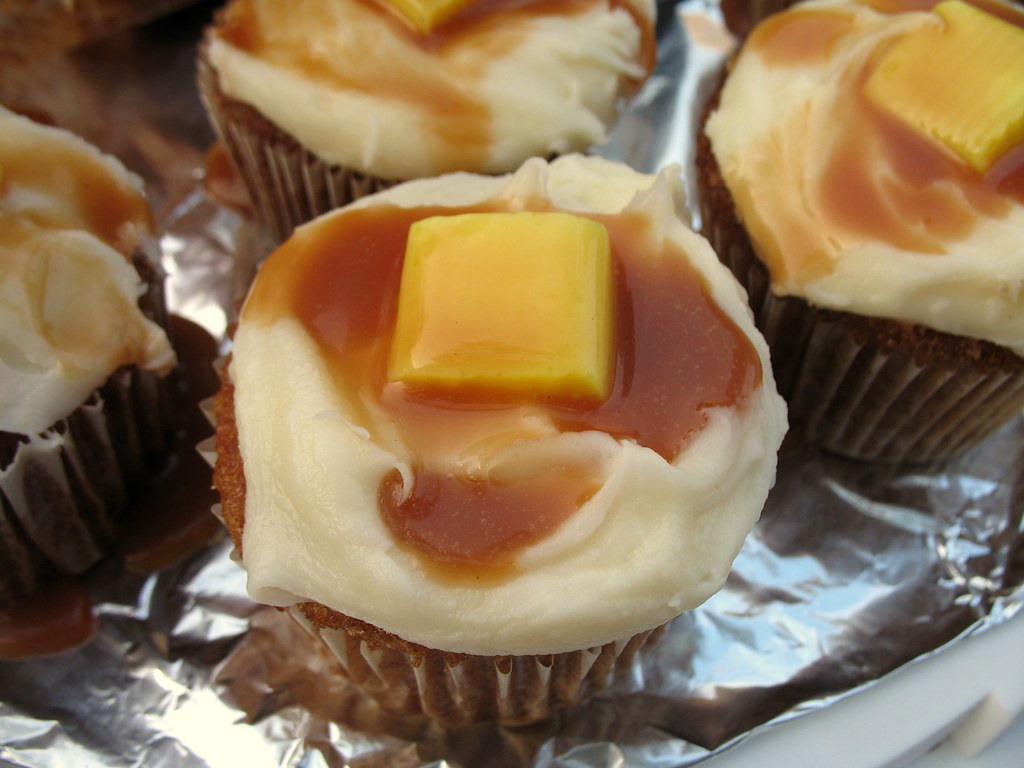 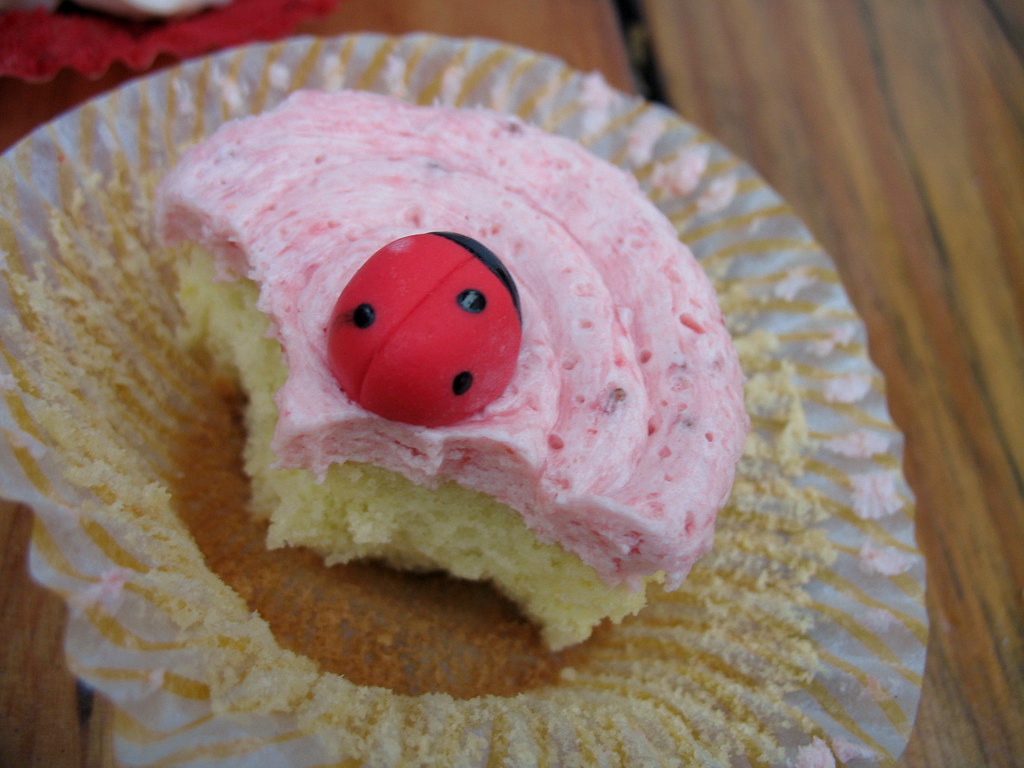 a cupcake with fresh strawberry frosting 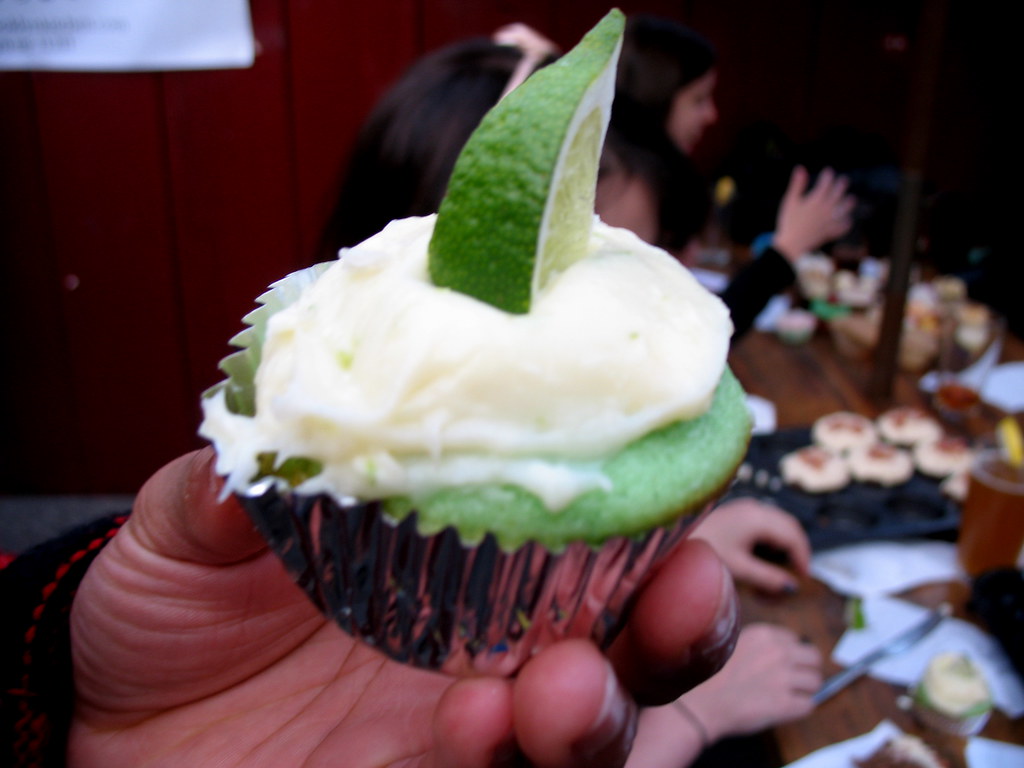 For the record, there were 57 cupcakes, so it was impossible for any one person to try them all — or photograph them all, though many cameras were swirling about the patio. I am told there were two types of cupcakes made with parsnips, caught glimpse of a ruby red and kelly green watermelon-looking cupcake being eaten, and overheard there were no less than three cupcakes named after Elvis, for various reasons. There were some cupcakes made by professional bakeries and caterers, and others made by food bloggers, like Alex of Blondie and Brownie. To even the playing field between contestants with a commercial kitchen and without, Brooklyn Kitchen owners Harry and Taylor roped off the professional bakers in a separate category for the judges. Somehow, I got stuck serving along the same ledge as them. This may have proved beneficial to my tastebuds, but not necessarily to my curbside appeal, comparatively.

Actually, there were three people who had to taste them all, the brave judges. Rachel Wharton, Edible Brooklyn Deputy Editor, and two others (names coming) spent at least an hour in a corner of the patio tasting and critiquing each one. The rest of the judging was up to the audience. The Brooklyn Kitchen cleverly devised the cook-off as a fundraiser for the Greenpoint Soup Kitchen in such a way that each person could purchase a “vote” for $1. The more votes (hence, dollars to charity) a cupcake garnered, the closer it would come to being named the ultimate winner of the evening.

That vote went far in favor of one certain cupcake entry. But before we get to that, here is what the judges had to say. 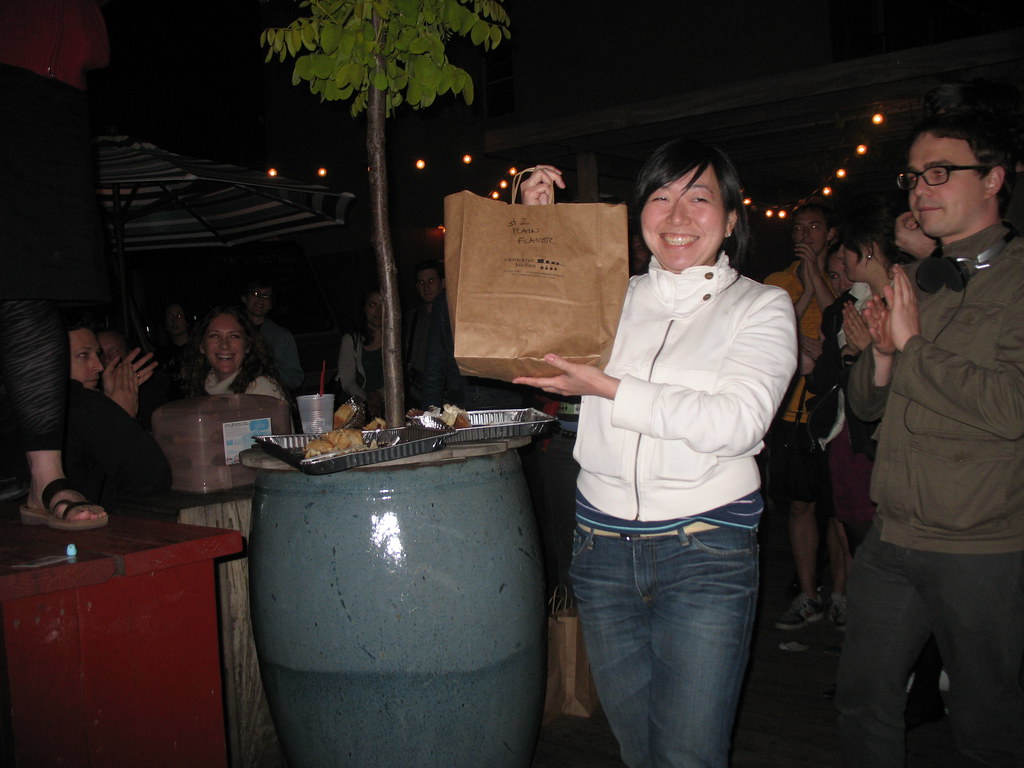 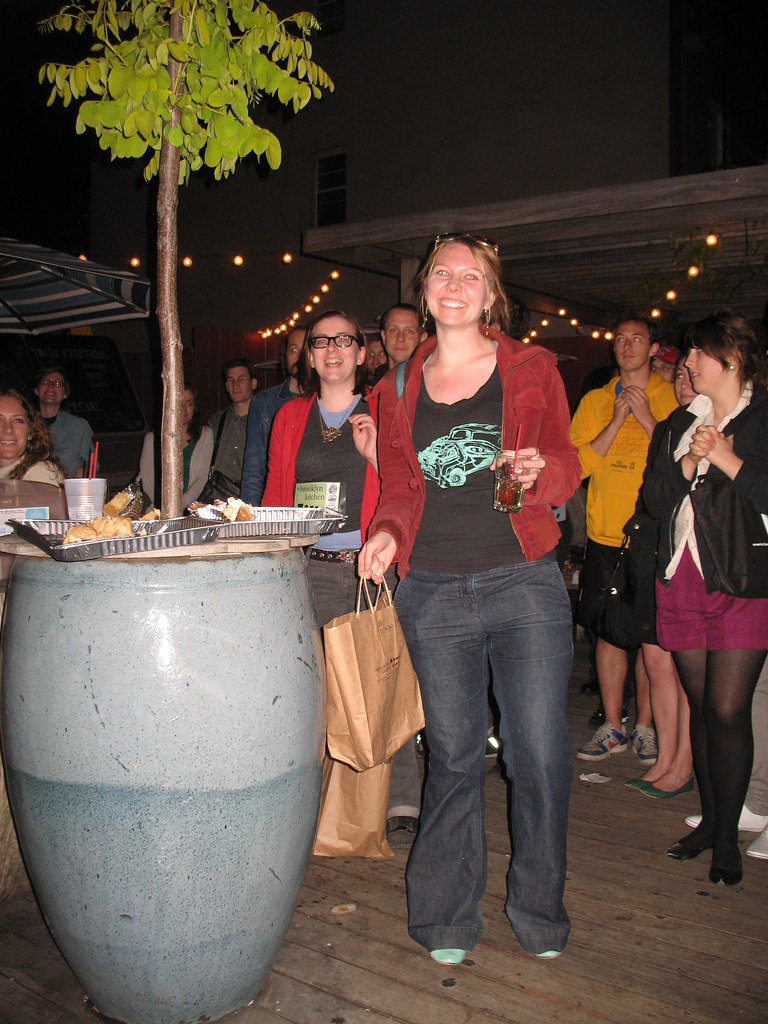 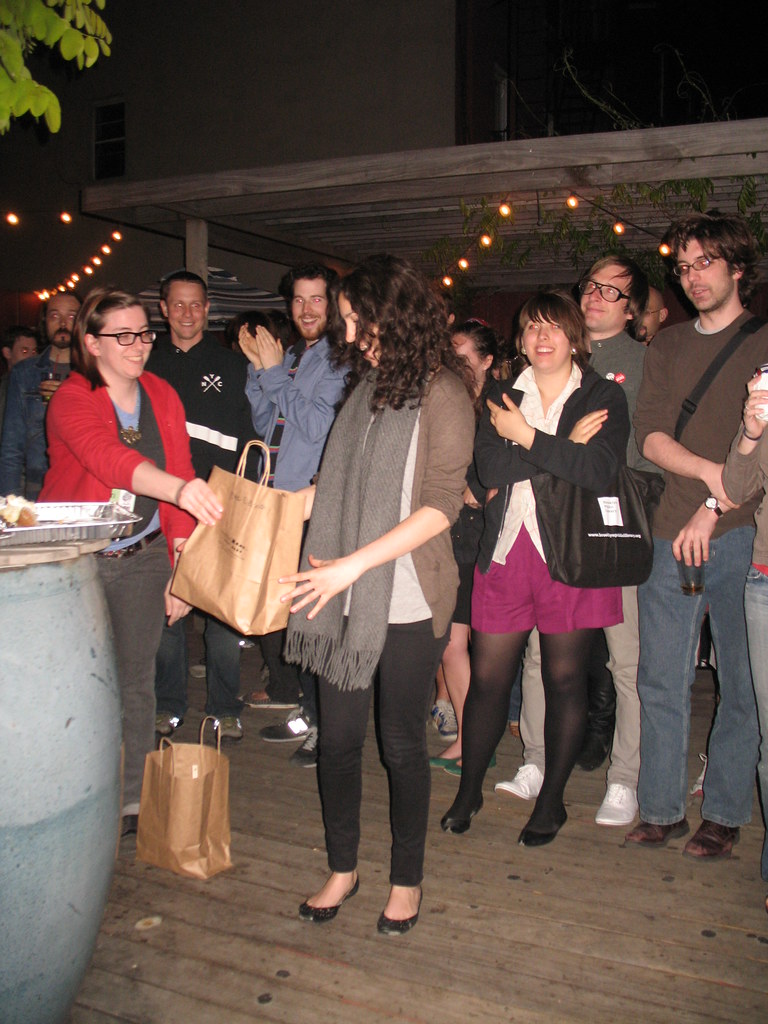 Melissa of Cake Hero’s cupcakes placed in the decoration category 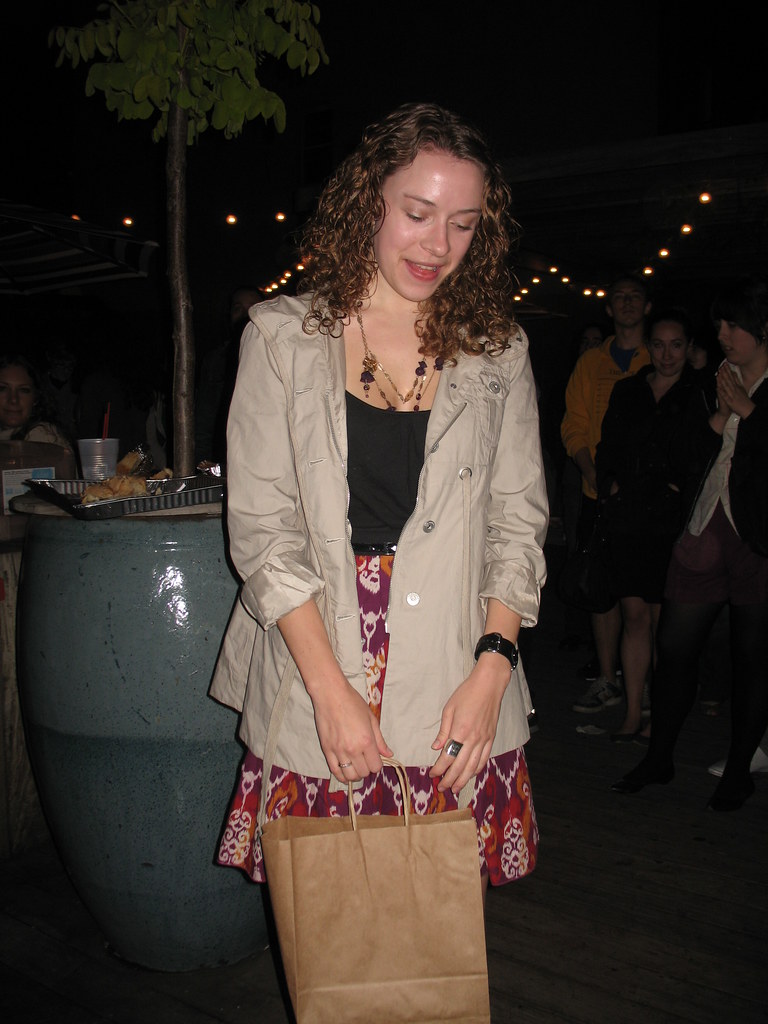 as did this contestant (I know, this is terrible reporting but a final list is coming) 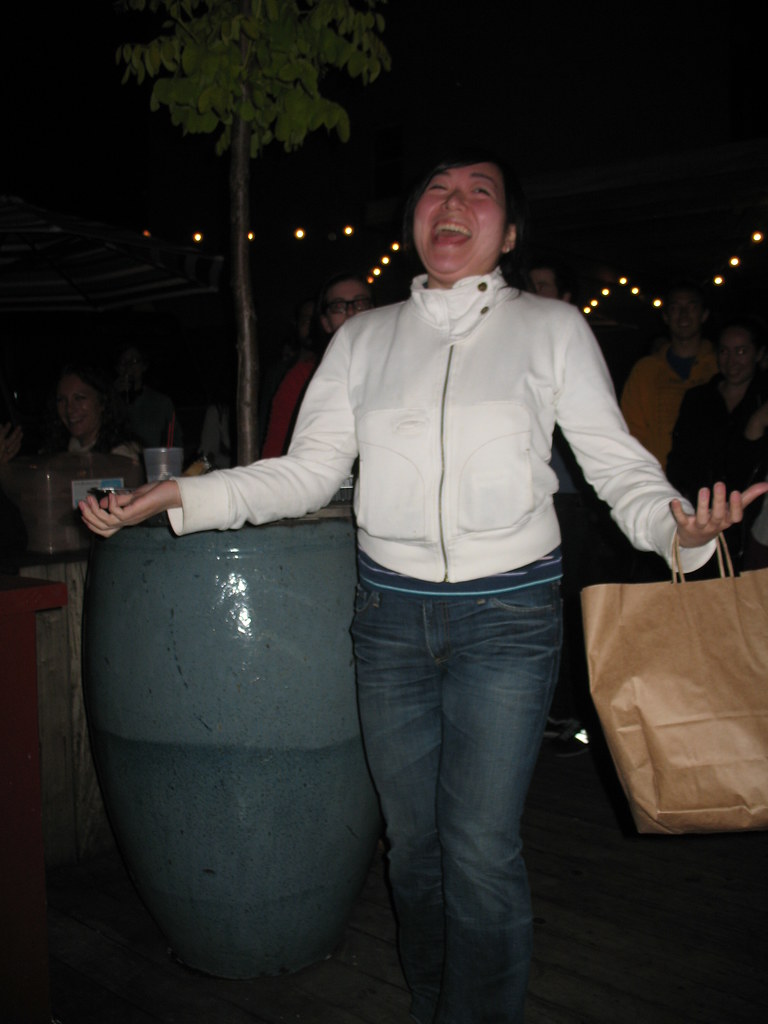 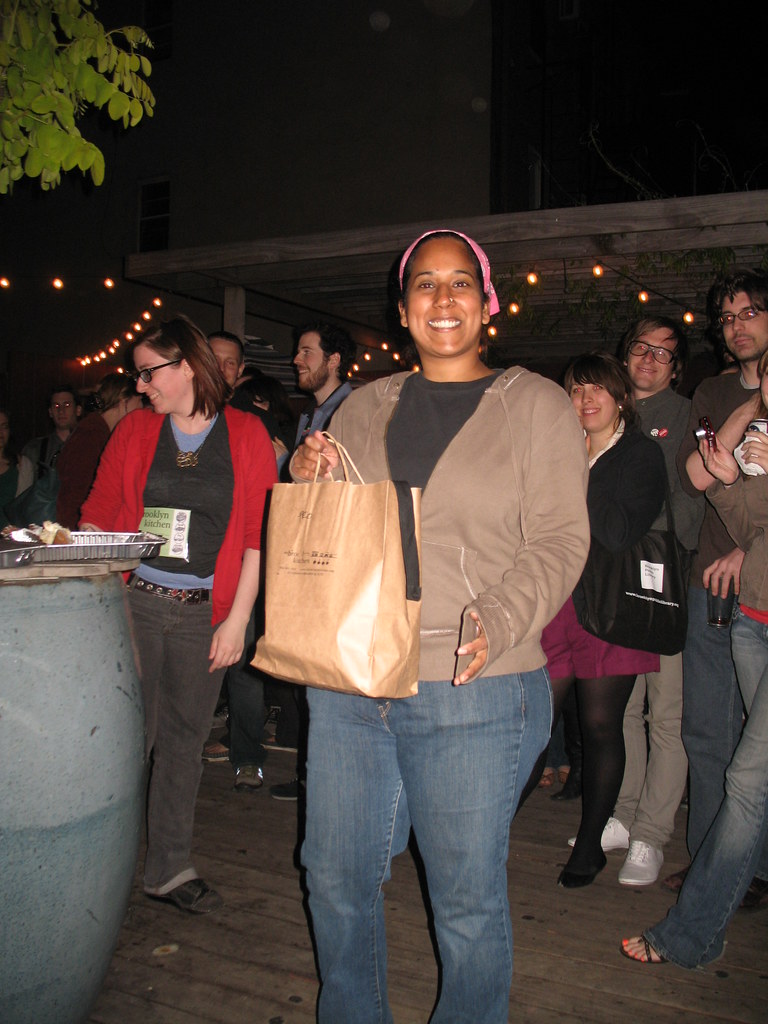 
In the special category for the best effort by a professional baker, Indira “the sweet” Wiegland won for her dual-flavored mini cupcakes: almond and lemon custard, and carrot-ginger. Now these were two cupcakes that I did try and thoroughly enjoyed, well beyond my fullness point.

But after the judges had spoken, and bags of various cooking tool prizes were handed out, the patio was drawn to a low hush. The final award of the night — the real one, for the annual event — had been decided by a landslide audience vote. That cupcake variety garnered 235 votes and that many dollars for the Greenpoint Soup Kitchen. And heroically, the cupcake belonged to Kate Brown, the winner of last year’s Brooklyn Kitchen Cupcake Cook-Off. Her cupcakes had peanut butter, fried bananas and Southern Comfort frosting and were named after Elvis — no idea why! 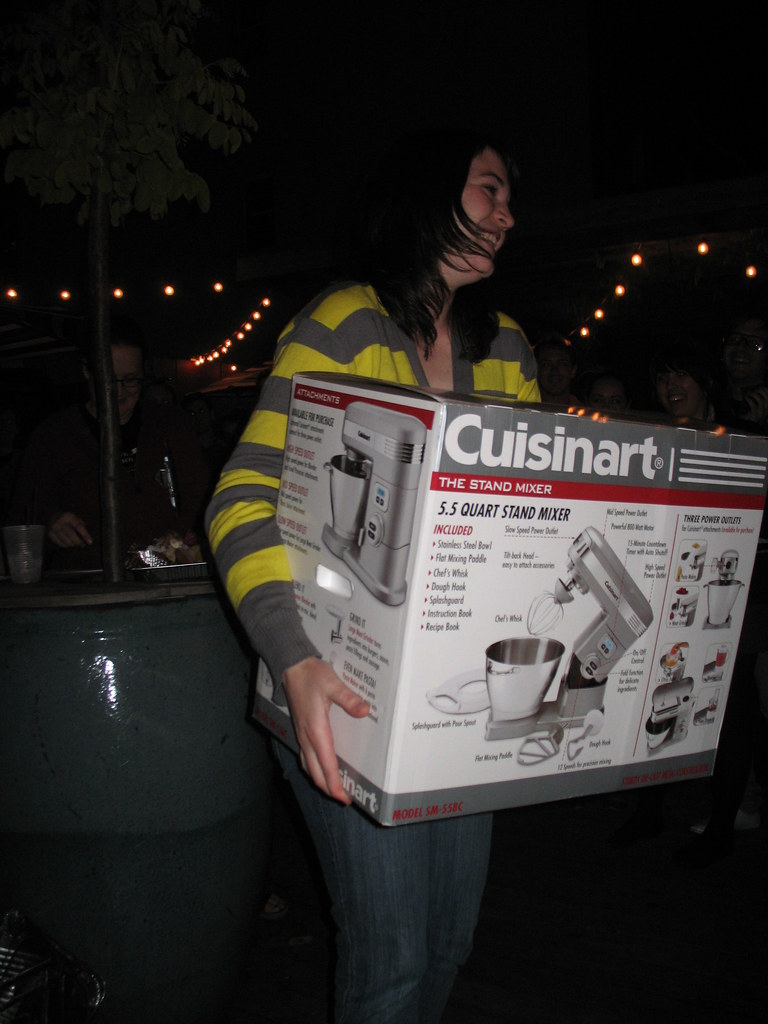 But she won a huge stand mixer for rocking the competition again. That’s alright, momma!

And in lieu of Kate’s winning cupcake recipe, I offer this humble entry by myself. It’s the second time I entered the Brooklyn Kitchen’s cupcake-a-thon, and second time not placing in it, either. What can I say? The competition’s rough. Harry announced at the beginning of the contest that the first year of the cook-off, there were about 15 cupcakes to judge; the second year, there were thirty. Following that math, it was only natural that this year, their third, about 60 cupcake bakers signed up and 57 made it to the event. “Next year, we’re going to need a bigger venue,” he said, standing atop a concrete booth backing’s ledge. You can bet I’ll be there, wherever it is. 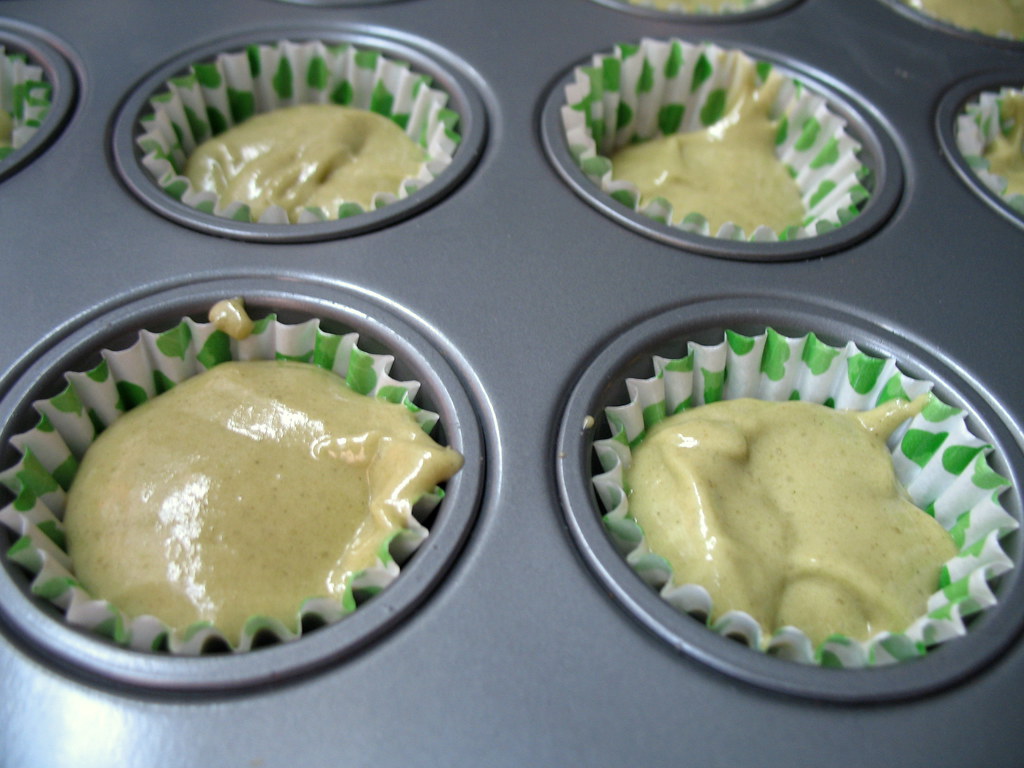 Preheat oven to 350 degrees. Cut butter into cubes. In a large bowl, beat 1 stick of the butter with the 1 1/2 cups sugar. Separate the eggs and beat in the yolks well, until fluffy and lighter in color. In a separate bowl, sift together the flour, baking power and salt.

While beating, alternate adding the flour mixture and the coconut milk. Add the matcha and continue beating until well blended. Meanwhile, beat the egg whites in a stand mixer or rapidly with a whisk until light and foamy. Gently fold in egg white mixture to cupcake mixture. Fill into miniature sized cupcake liners in a mini cupcake pan. Bake for about 20-25 minutes or until a toothpick inserted into the center of a cupcake comes out clean.

Meanwhile, make the frosting: beat the cubed butter with the confectioner’s sugar and coconut milk. Add the coconut flakes. Once cupcakes have cooled completely, frost each one. Top with a green tea tapioca pearl and serve.

Eight brownie points: Cupcakes are no healthivore’s dream come true, and folks had better know it if they plan to attend a cupcake cook-off. Sure, there are some antioxidants in green tea, even in powdered form, but it’s mostly sugar otherwise, and a lot of it at that. I don’t imagine there are many things as sugary as the all-American cupcake. (And I had been thinking about rolling the tapioca pearls in granulated sugar for a gumdrop-looking effect! Too bad there was no time for it.)

Two maple leaves: Almost no props whatsoever. The dairy and protein in these cupcakes — butter and eggs — come from local sources, but the highlights of the recipes are largely imported. Tropical coconut milk and shredded meat doesn’t come from very close quarters, and neither did the Japanese store-puchased satchel of matcha powder. What will happen to the state of dessert flavors if we were to stop for a moment and go local and seasonal, all the time?