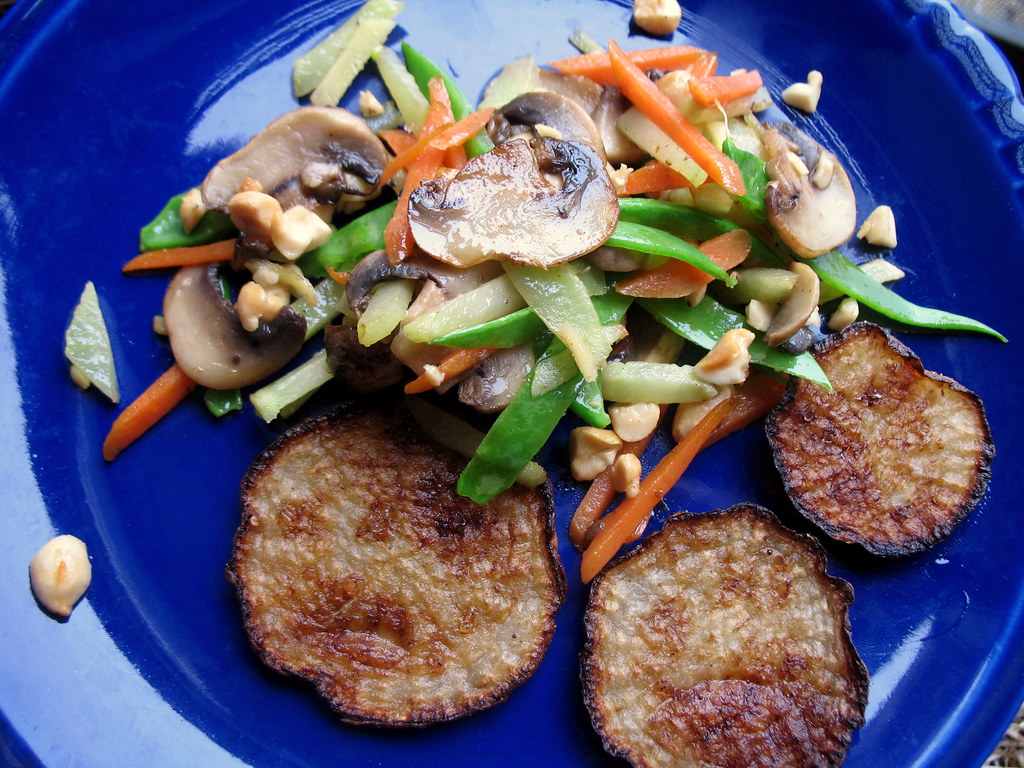 There is a dish in Cantonese cuisine called turnip cake. Then there is a dish with turnip cake, chopped into cubes, and stir-fried with bean sprouts, scallions, some other veggies and often peanuts. I’m quite certain this latter dish was a leftover invention. The very best turnip cake (which is actually made from radish but I’ll get to that later) in my opinion is seared to a beautiful crisped surface, and is soft and mushy on the inside, like glutinous mashed potato, with chunks of radish and minced dried shrimp or Chinese sausage. If uneaten in this heavenly state, the leftover turnip cake firms up a little, becomes drier and basically needs a boost. I thought I’d interpret this latter dish, only with slices of real turnip instead of the cake.

Because the unfortunate thing is that turnip cake, as much as I love it, is really complicated to make yourself. First, it’s not a sweet but savory snack and yes, it’s usually made of mostly shredded daikon radish and rice flour. I’ve bought blocks of the stuff from Chinese grocery stores — perfectly rectangular, processed, and pretty disappointing — to slice up and pan-fry at home. But it’s just not the same. I’ll save that experiment in home cooking for a rainy day. On an unusually bright and sunny day this spring, however, this simplified dish was very quick to make, and thrifty. 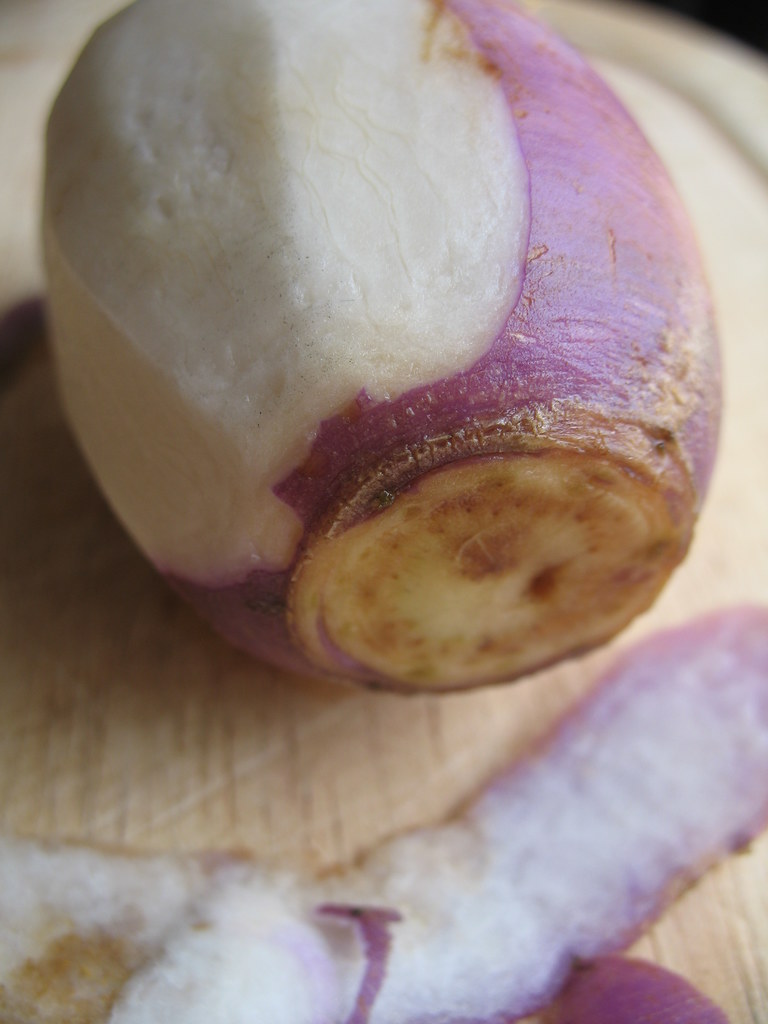 a purple-topped turnip no more 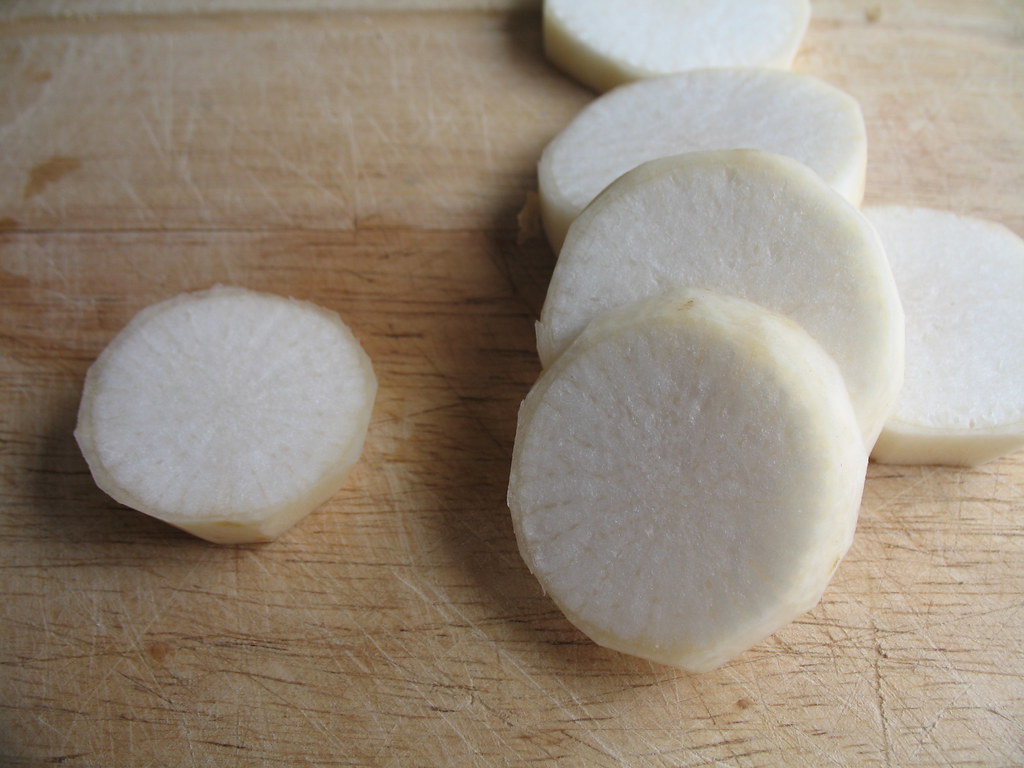 I’ve been having a little love affair with the turnip lately. Ever since it melded into a delicious risotto, I’ve begun to look at it in a new light — no longer the sharply bitter orb that smelled of acetone and needed to be cooked forever to weaken. If cooked a little, and with some carmelization, it’s delightfully spicy, peppery and sweet. (Or maybe I just sprinkled a little too much white pepper on my turnip rounds while they were pan-searing. I’m not sure, the color matches too well.)

Not to mention, turnips are still cheap, and spring vegetables haven’t made terribly much headway yet. I’d initially wanted to have a sort of spring vegetable stir-fry with these turnips, so I got some snow peas and scallions in Chinatown. In the original plan also was to thinly slice some shiitake mushrooms, but after eating them up for those ricotta canapes, the final cast of veggies in this stir-fry came down to: julienned carrots, snow peas, sliced button mushrooms, fresh ginger and broccoli… stems. 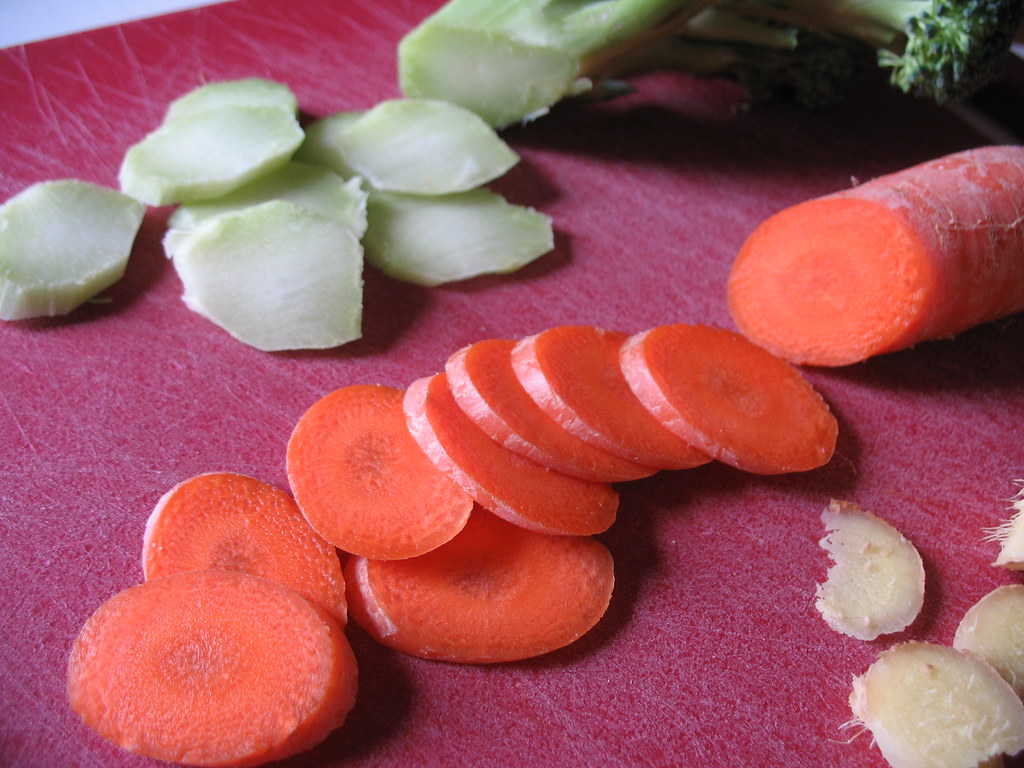 Broccoli stems actually work great in an application like this — slivered and stir-fried gently. The Chinese are always sly to use up broccoli stems by shucking its tough outer skin and tossing pieces of the stem into dishes; it has a pleasant crisp-tender texture and a neutral, if somewhat cabbagey flavor that absorbs whatever flavors are around it. I recently heard that some manufacturers are shredding up stems and selling it packaged as “broccoli slaw.” Whatever, I’m proud of eating “stems” even if that sounds unappetizing, or seems less edible or something. One less thing for the compost. 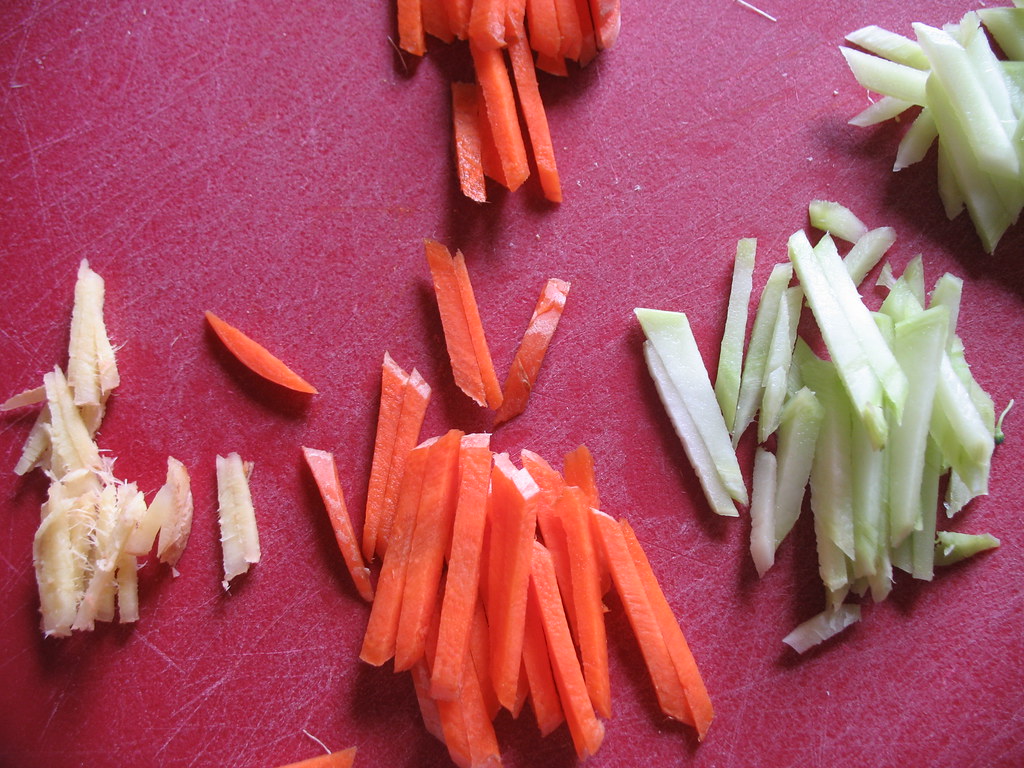 As you can guess, the ingredient list in this dish is quite malleable. Bean sprouts would be nice, and shiitakes do impart a really savory flavor distinct from regular button mushrooms — recommended. But the one thing I wouldn’t skip is the fresh ginger. Just a little bit to each batch. It really adds freshness and zing. That and perhaps the peanuts, for crunch and the way it seems to tie all the ingredients together. Finally, I forgot to toss in the chopped scallions at the end of making this recipe so the photo at top bears none… wouldn’t recommend that move.

The most delightful part about this dish for me was finding how tasty seared turnips were. I pressed mine down in the middles a little bit while cooking to make sure they browned evenly, and it’s good to keep the heat down after that initial sear to prevent them from burning as you’ll want to give them some time on the pan to soften (depending on how thick your slices are).

Hope it turns up in your kitchen! (Wow. Someone take me to the corn factory.)

In a skillet, heat 1-2 tablespoons of the oil over a medium-high flame. Arrange the turnip rounds in a single layer on the pan (working in batches if necessary). Sprinkle with salt and white pepper. Cook until lightly browned on the bottom. Flip, season the other side, and cook until browned on both sides, about 6 minutes. Add more oil to the pan if it becomes dry and reduce heat if turnips are beginning to burn around the edges.

Remove turnips from pan and set aside. Heat the remaining tablespoon of oil over medium-high. Add the ginger, carrots, broccoli stems and shiitake mushrooms and cook, stirring occasionally, about 3 minutes. Add the snow peas and cook another 1 minute. Season with salt and white pepper to taste. Add the peanuts, toss once more, and remove from heat. Arrange on a plate with the turnip rounds and serve immediately.

Cost Calculator
(for about 3-4 servings)

Three brownie points: A sure-fire sign that spring is almost here, even if not its harvest: I’m eating healthier! I want to lose the tire around my waist till next winter’s gluttony. Or make it last. Anyway, white turnips have a host of alphabet vitamins as well as some calcium and protein (buffering that argument about white veggies, perhaps).

Four maple leaves: This one wasn’t so on point, for sure. While toying with white turnips harvested back in the fall/winter, I invited some non-local, non-seasonal veggies into the mix, like those snow peas. Perhaps the fourth point goes to using up broccoli stems, instead of tossing them out.