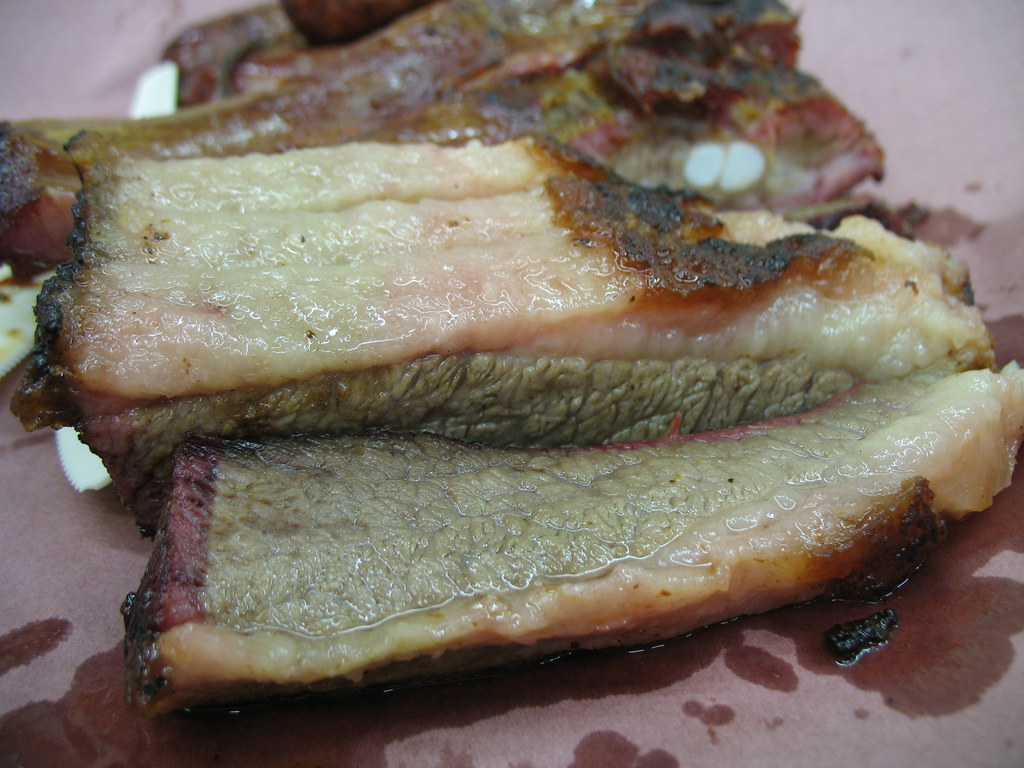 My brain is on BBQ. Smoked, slow-cooked meat has no doubt lodged itself deep into the heart of Texas. But until last weekend, it had never really captured the fancy of me, this New York-New Jersey girl with no Southern roots to speak of. Until, that is, I went to Texas.

In between panels at the South by Southwest Interactive festival, I found the chance to dig into the regional specialty. How could I not? Even during the live chat on Austin Relish with two of my fellow panelists last week, supposedly a sneak preview to some of the topics we’d be discussing on food blogging at the conference, there was a steady stream of recommendations throughout it regarding where to get the best barbecue. I was sorry that I couldn’t try them all. But the two places I did get to sample include the popular downtown Austin spot Iron Works BBQ, and, on a country retreat, the time-honored Smitty’s Market in Lockhart (“the barbecue capital of Texas”).

Knowing the notoriety of Lockhart, then, and the progressive culture of Austin, comparing two ‘cues from each location might seem a bit of an unfair fight. But let’s hear this one out first.

My first stop in Austin was actually Iron Works, where I met friends just after landing; I’d already eaten, so merely drank a cheap beer while the others were wrapping up. A couple days later a friend took me on a field trip from the four-day geekathon that is SXSW Interactive to Lockhart. There are four major barbecue destinations in this charming if timeworn historic town. Each has their own rich histories and secret recipes. Smitty’s Market changed hands from one of these competitors, Kreuz, in 1948. But the building that this market is located in has been smoking barbecue meats for over a century.

The brick walls of the smokehouse have about an inch-thick patina of wood smoke in some parts of the interior. Every inch of the place must have absorbed decades of delicious smoke, too. It’s this rare accumulation that gives the barbecue at Smitty’s such a deep, smoky taste. I found it almost too difficult to breathe while standing in the meat market (and felt too outsider-ish to ask why there were three open fires in seemingly random spots on the floor, just hanging out, blazing), though the novelty factor made it definitely worth the effort. While taking in the sights, I also had the chance to learn a bit about its history from the friendly owner of Smitty’s herself, Nina Sells, who we ran into three times while walking around Lockhart. (Small town.) 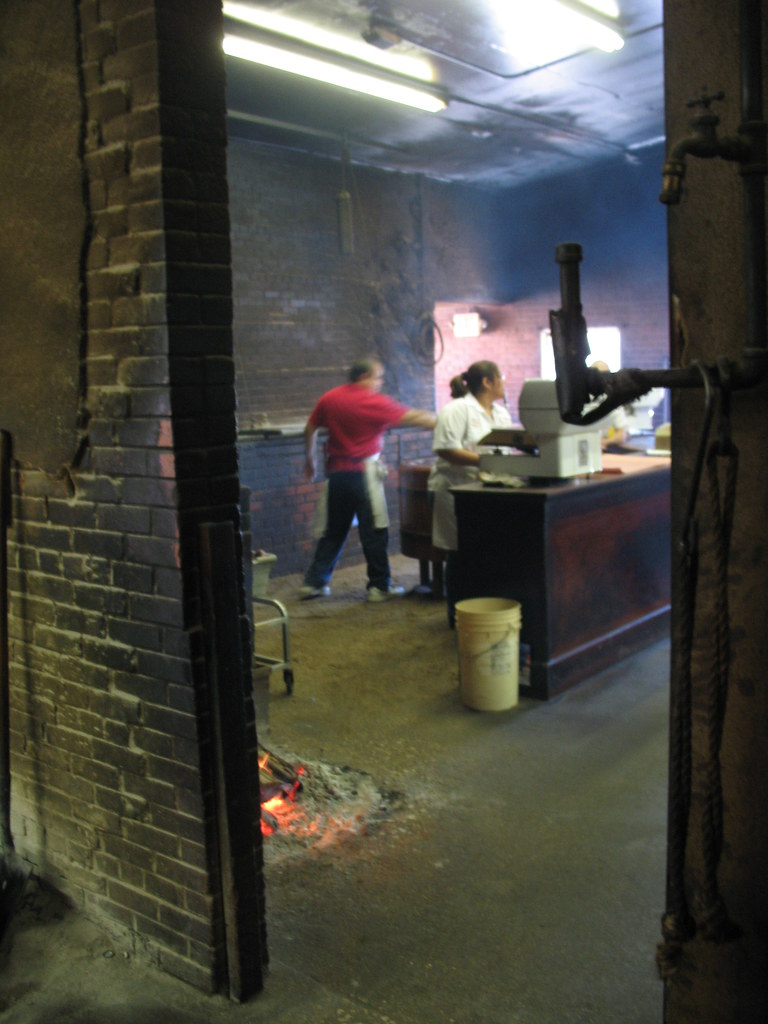 the smoky interior of Smitty’s Market 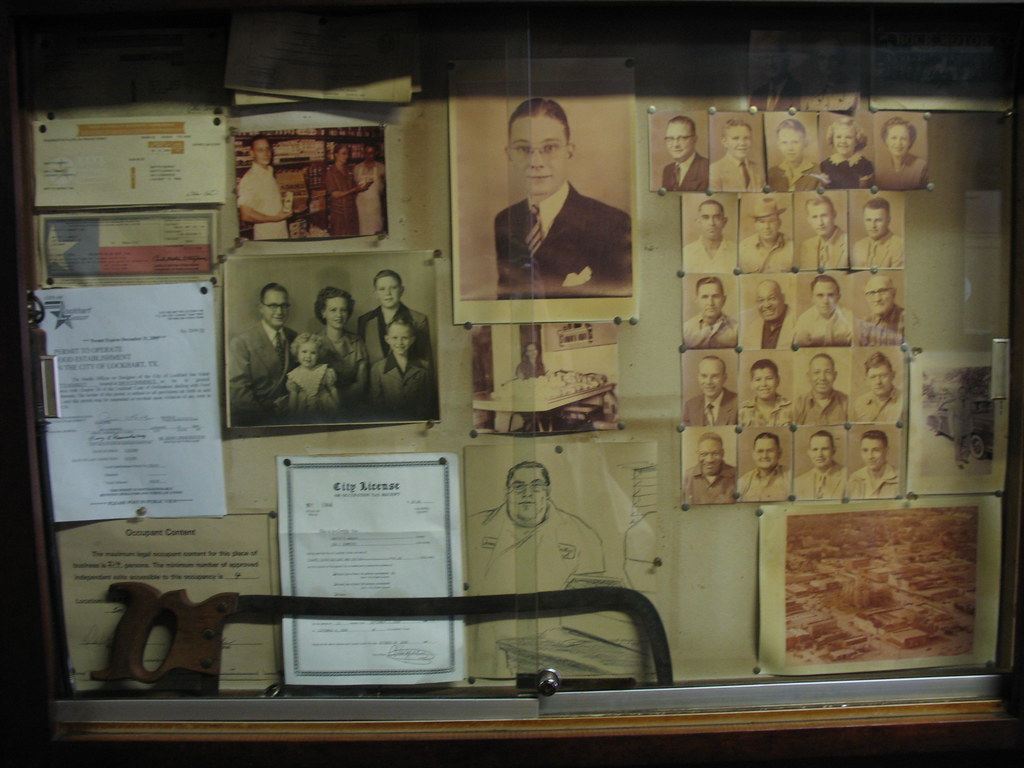 a wall of nostalgia at Smitty’s Market


After ordering a combination of brisket, pork ribs and sausage by the half-pound, a carver opened up a long pit to remove the meats, releasing a billow of smoke. Instead of placing it on plates, the carver next piled the sliced meats on a few sheets of butcher paper and crunched up the edges so that it could be handed over, as a sort of greasy origami boat. A stack of sliced white bread was tossed in for good measure, and once we got to the register outside the smoking pit area, we ordered a couple sides of cole slaw and potato salad. Plastic knives and spoons came with the bundle, but when I went back to the counter for forks, I discovered that these were never stocked. “Your hands are the fork,” the counter person said. Spoons took care of the sides, and knives, if you really needed them, the meats. 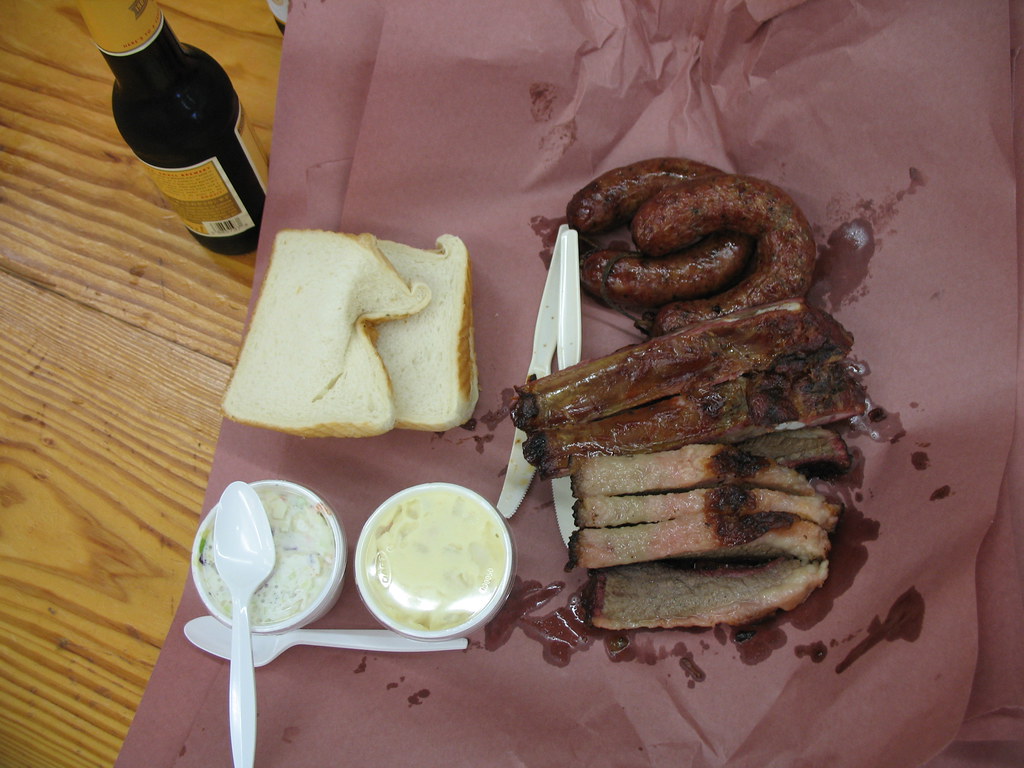 the “plate” at Smitty’s Market 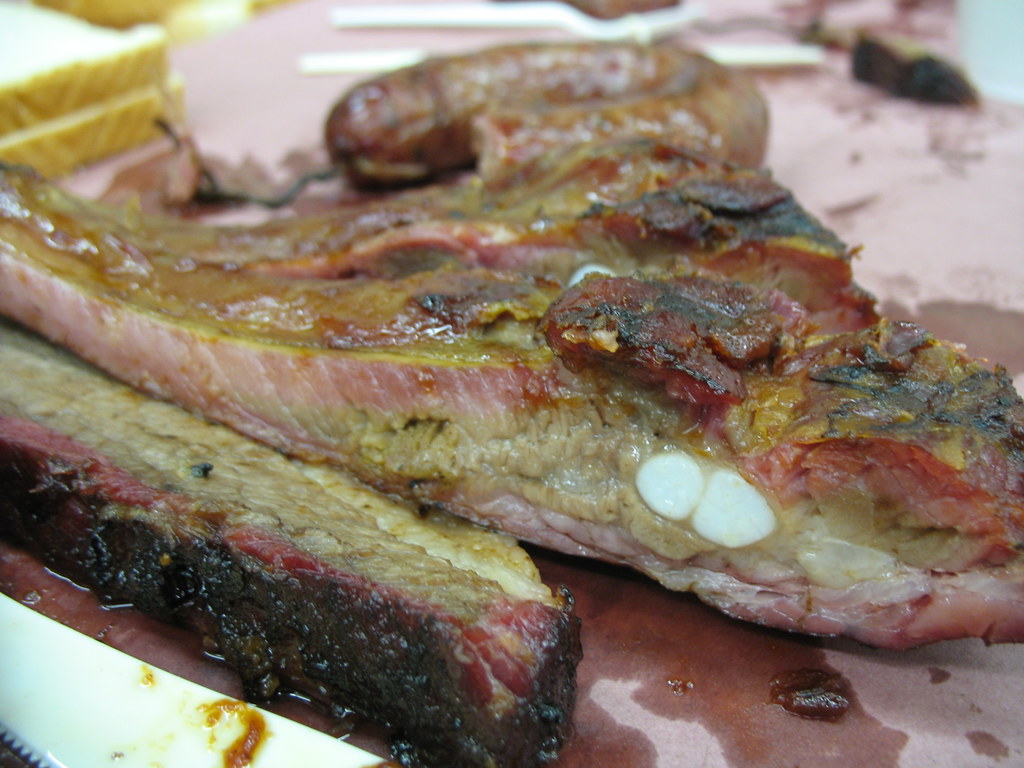 Let me pause and just say that writing about food that I didn’t personally cook is a tricky change of pace for me, because I don’t know the ins and outs of how it came into existence. I think I’m going to wallow in the mystery of this barbecue, and just say it was really good. Dry rubs, the Texas preference, suit me better than lots of sticky sauce, I decided. So does crackling firewood, which is the scent and taste I was basically inhaling the whole time there.

Back in Austin, for one of the final meals I’d have during the conferences I couldn’t resist doing the ‘cue thing again. So my fellow food blogging panelist, Zach from Midtown Lunch, and I snuck into Iron Works BBQ for one last parting plate. Zach had done an impressive job scoping out the best, most authentic Austin eats while there for the first time himself, taking quick cab rides off the beaten path. This is because nearly everyone in Austin will tell you that to get good barbecue, you have to get outside of downtown. Except if you’re going to Iron Works.

From what I’ve gathered, the locals-approved, tourist-friendly smokehouse is authentic Texas barbecue. You get your choice of meat — brisket, beef or pork ribs, sausage, loin, chicken and more — by the pound in a messy pile of finger-licking-ness, with a few slabs of white bread, pickles and onion. There’s “plates” that come with baked bean and potato salad sides, combo platters, and even house smoking made to order a few days in advance. Atmosphere is a configuration of long cafeteria-like tables and smaller four-person ones, equipped with sauces and a roll of paper towel-like napkins. I’m no expert on these places, obviously, but I walked in and liked the feel immediately; it was cozy without being too dingy. 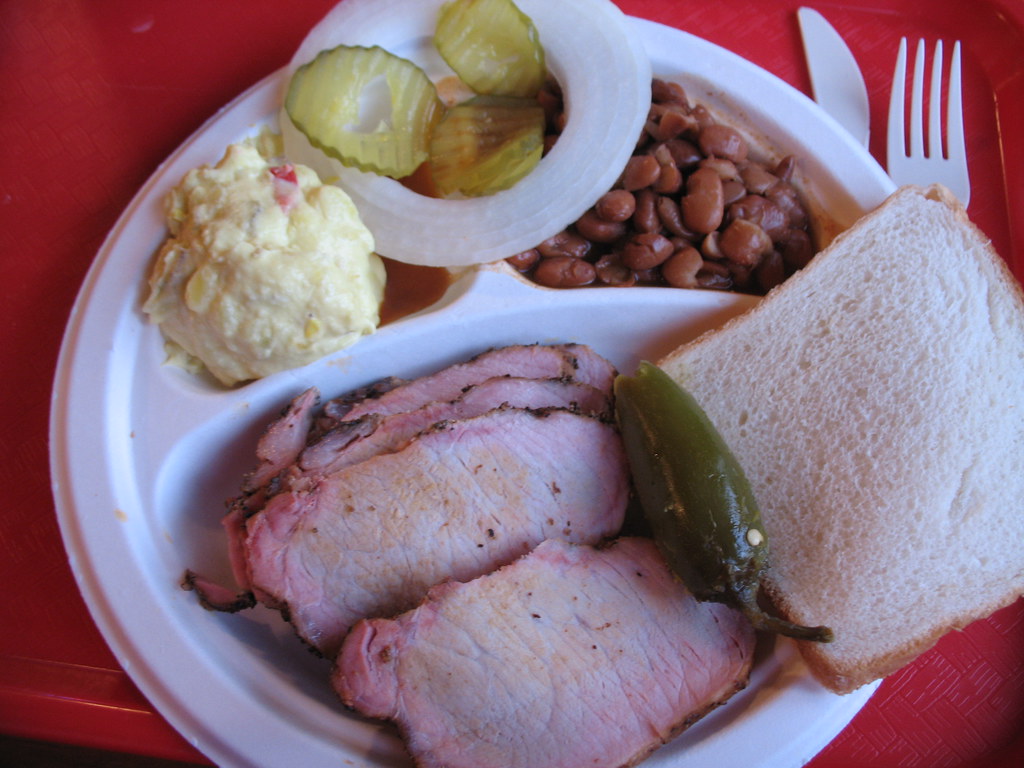 I ordered the pork loin plate this time simply because it was lean, and got to dip into Zach’s brisket, rib and sausage combo. The loin was just as lean as I’d hoped, though it naturally benefited from a squirt of the sauces on the table (two kinds — spicier or sweeter) for moisture and flavor. The ribs and brisket weren’t nearly as distinctive-tasting as what I had experienced in Lockhart the other day, though they were remarkably tender, the brisket near the point of falling apart at the touch of a fork. The homemade pork sausage, on the other hand, was less spiced than I’m used to, at both Iron Works and Smitty’s, though not in an unpleasant way. Must be a Texas taste. 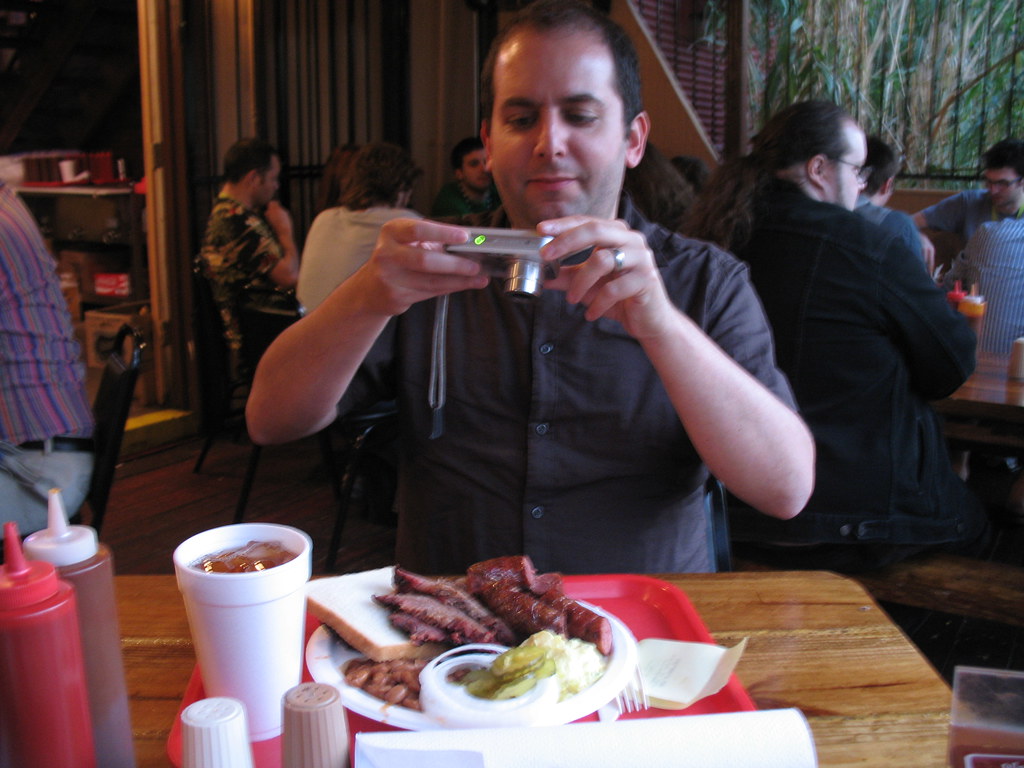 It couldn’t be more appropriate that this atypical dining-out post includes a meal with my blogging antithesis. It’s been a joke that Zach and I are “sworn enemies,” since Midtown Lunch is about finding good restaurant grub in Midtown Manhattan, and that activity happens to be one of the main frustrations that put me over the edge and begin “not eating out in New York” some two and a half years ago. In any case, we shared a common ground in Austin as clueless New Yorkers, both pretty new to these barbecue traditions.

I mused on how the reddish-tinged edges of the ribs reminded me a little of Cantonese char sui roast pork; Zach talked about the different way of treating brisket in Jewish home cooking (boiling or pot roasting). I found a new appreciation for the practically mashed, vinegary cold potato salad that seems to be standard in these parts of Texas; we agreed that the raw rings of onion didn’t suffice as vegetable sides, nor were they doing much taste-wise for either of us. I turned my nose up at the plain white, spongy bread that came with every order (why not upgrade to crustier bread?); Zach waxed poetic about how lovable it was. All told, we had a terrific time stuffing ourselves when we weren’t even that hungry to begin with.

Back in September when I decided to forego not eating out de rigeur, I wanted to treat restaurant excursions as something special — limited to special occasions, or special foods that I really couldn’t begin to make at home. As a consequence, every new prepared treat I’ve tried has been that much more sacred, keeping my imagination stirring long after the sensory buzz has worn off, especially in the case of this ‘cue. Needless to say, this was a memorable eating-out excursion, which I hope my inexpertise in hasn’t bored anyone by now. Unless I happen across a century-old smoking pit in the city, I won’t come close to making something like this. We’ll see. (Jewish pot roast, on the other hand, doesn’t sound half bad an idea.)