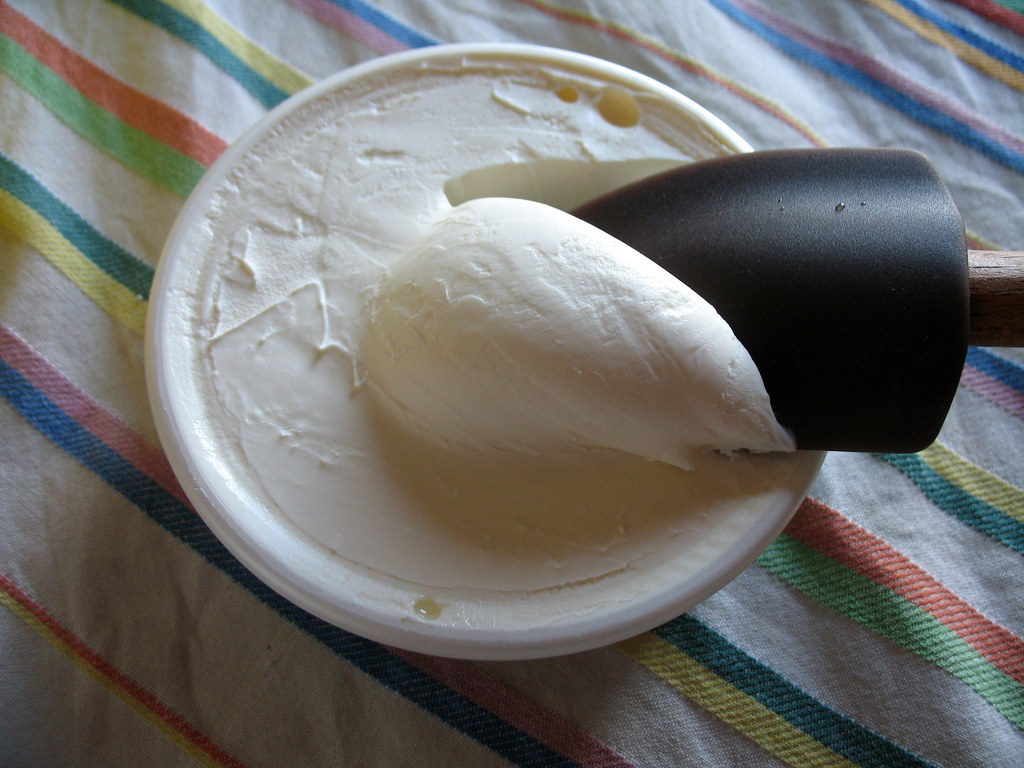 Once upon a time, I thought that ice cream “flavors” were just flavoring added to plain, perhaps vanilla, ice cream. “Chocolate” was dabbed in from a vial labeled so along with some fudge-colored dye, and “Strawberry” got its juice in much the same way, save for a few streaks of seeded fruit in some versions of the ice cream. Of course there were the chocolate chips and chopped nuts of Rocky Roads and other stuff-studded ice creams, but the bases would be flavored all the same. It’s funny how even in naiveté, you get some things right.

I’m talking of course about so-so, run-of-the-mill, not “all-natural” ice creams that I ate as a kid, sometimes from those blossom-shaped cups with the wooden peg spoon in the lunch room, not the premium, artisanal best-of boasting brands. And certainly not homemade ice cream. I didn’t dream ice cream could be made by people at home. (This disbelief was stamped for many years after an ill-fated Christmas when I asked for and got the Barbie Ice Cream Shoppe, which was supposed to make ice cream, but it did not. Sad, slushy memories.) We’ve come a long way since then.

Good ice cream (and frozen yogurt) should be flavored with the stuff that the flavor is actually named for. It couldn’t be more clear to me now, after making several kinds. Vanilla? Steep the milk in vanilla beans. Basil or chai tea? Ditto with leaves, spices and tea. Add peanut butter, and stir for “Peanut Butter” flavor. Oh, it’s so elementary. For the fruity flavors this can be trickier, since you don’t want too much extra liquid, so I like picking a  flavorful fruit that has some density when mashed up, so it doesn’t mess up the texture of the finished ice cream too much.

So for “Mascarpone” ice cream, we’ve got ice cream and… mascarpone. If you’re not familiar with the incredibly dense, creamy Italian soft cheese pictured at top, it’s a bit like cream cheese, only more subtle and fresh-tasting, I’d say. It’s easier on sweetness, and has maybe a hint of tang, since it’s made from creme fraiche. All my friends just adore it.

It’s also a main component in the Italian dessert tiramisu, which is one of my friend’s favorites. So when it was her birthday a few weeks past, I decided to reinvent the treat in some hopefully memorable fashion. Now, I’m a fan of eating complicated layers of flakiness next to creaminess next to flakiness next to syrupyness that meld in your mouth just as much as the next person. But I wasn’t too gung-ho about my chances of pulling it off right. Tiramisu is a tiered dessert that’s got to be done perfectly to stand proud when sliced up and served. So instead of doing that, why not just bulldoze the tower, conceptually speaking, and serve the separate components in a flashy pile of ruins on a plate? I thought. Simplify, simplify, simplify. 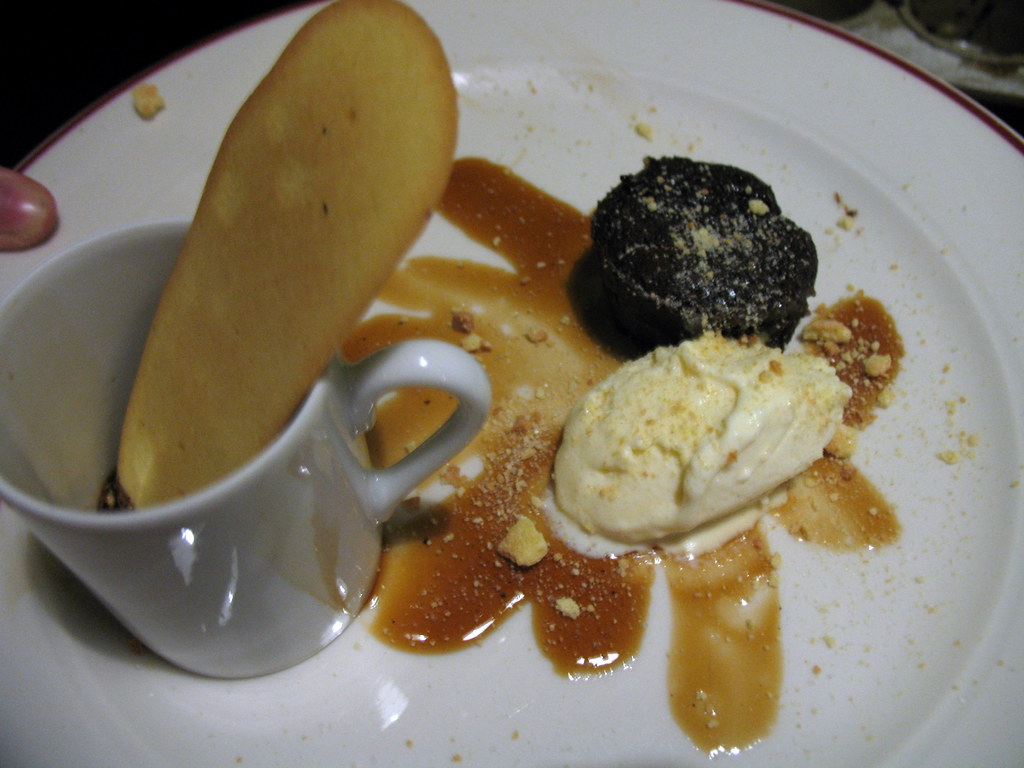 The plating could have been done a little prettier, and this photo taken in better light, but the end result wasn’t such a bad play. That’s a ladyfinger cookie sticking out of the cup of espresso on the left, which I followed a basic recipe to make. Tiramisu pits layers of ladyfingers dipped in coffee with mascarpone, or mascarpone-flavored custard, drizzled with sweet liqueuer and topped with chocolate powder. So moving along from the espresso with a ladyfinger, I brushed a Marsala syrup on the bottom of the plate, in hopeful floral designs. This was basically sweet Marsala wine cooked with a 50% ratio of sugar until thick like syrup. We placed a soft-centered chocolate cake in the center of each plate to oomph the chocolate contribution of the dessert, and beside it, a canelle of that mascarpone ice cream (instead of a custard — who can resist ice cream?). A few crumbles of ladyfinger crumbs sprinkled on top for texture, and “Deconstructed Tiramisu” was done. As you can guess, the ice cream was my favorite part. 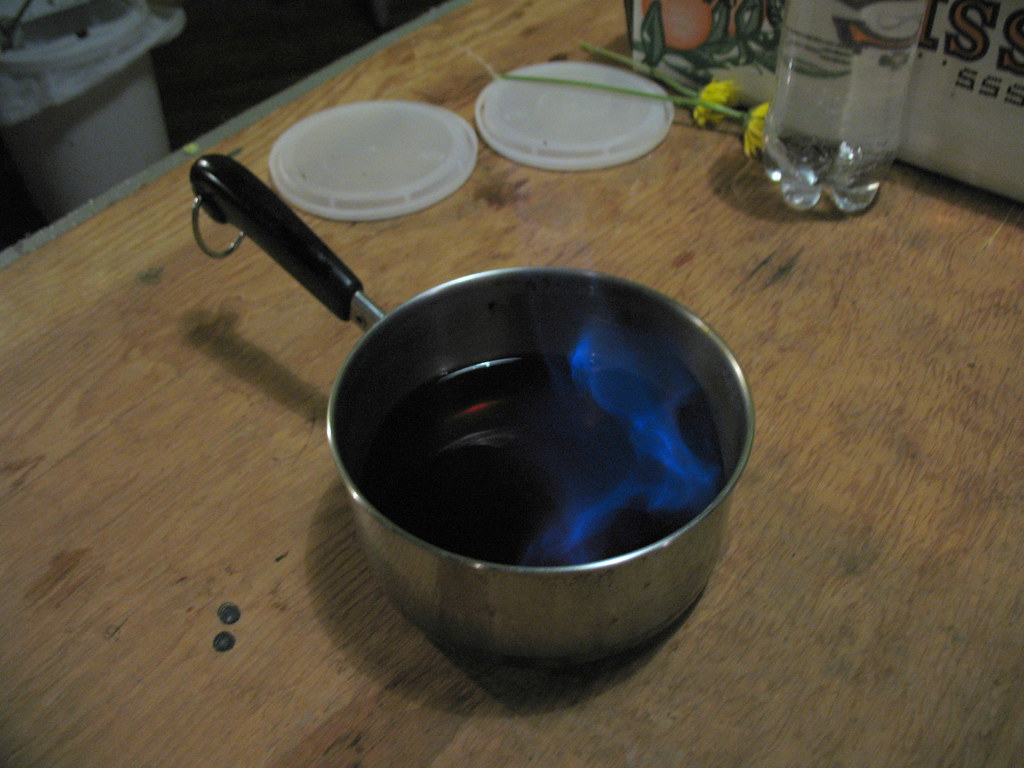 I switched over from speaking from a singular first-person to “we” at some point in that last paragraph, because I was actually joined with most my supper club crew when serving this dessert to my friend on her birthday. A Razor, A Shiny Knife put together a four-course menu for the dinner before this dessert went down, catered specifically to the birthday girl’s vegetarian diet and tastes. It was spectacular. Though I wouldn’t necessarily say “simple.”

And just before the recipe, I thought I’d close with some found footage from the night, of the plating of this dessert. I had no idea that a friend was taping the kitchen for the short duration of this clip. So it’s a true, unbridled glimpse of how we supper club it up. Although, since we were practically done with service, I must say that this is an incredibly serene moment — usually food is flying and elbows are jabbing into one another’s faces while plating a course.

In a small bowl, beat the egg yolks with the sugar until fluffy and lighter in color. Set aside. Combine the milk and cream in a medium saucepan and just bring to a boil over medium-high heat.

While beating the egg yolk mixture, pour in a small spoonful of the hot milk mixture and continue to beat. Repeat process with a larger spoonful, while beating, then repeat. Next, scoop all the egg yolk mixture into the hot milk mixture. Return heat to medium-low. Cook about 8-10 minutes longer, stirring frequently with a spatula to scrape all corners of the bottom of the pot. Do not let boil. The custard should be just thick enough to coat the back of a spoon, but have no lumps.

Chill the custard 4 hours or overnight. Whisk in the mascarpone and vanilla until smooth in texture. Follow your ice cream maker’s instructions to churn into ice cream. Transfer  to an airtight container and freeze for 2 hours to “ripen.”

Eight brownie points: This is one of the richest ice cream flavors I’ve ever made, owing to the fact that its “flavor”-maker is already as rich as heavy cream in its own. There’s little saving grace here, except a redundant reminder to enjoy it in moderation.

Three brownie points: The whole milk, but not the cream, had been locally sourced for this batch, and the egg yolks cage-free. Since mascarpone has such a short shelf life before turning sour, the container I found was domestic, but that’s as far as the details went in how it was made.