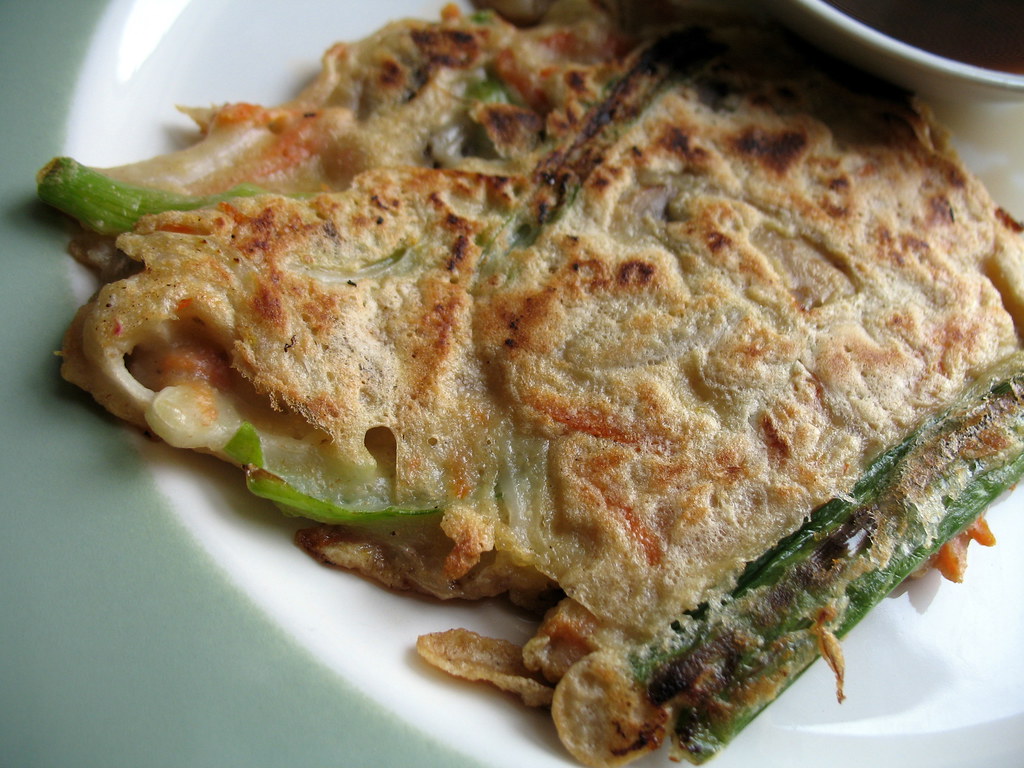 So I mentioned that I’m really into exploring the East right now — in food, and particularly from other Eastern cultures than the one I grew up with. So, after hiding my nose in volumes of cookbooks to piece together the esoteric recipe, and embarking on many journeys, sometimes to the farthest reaches of the city, in search of the exotic, elusive, often strange-smelling ingredients and their required cooking tools, and lastly, chipping away at the arduous cooking technique, losing half my investment and several hours to failed batches, I’ve managed to pull off a feeble yet daring recreation of the… Korean pancake.

Just kidding, of course. I can’t help but have a little laugh over how easy this dish is to make. And how universal it is, too. Called pajeon in Korean, it basically means scallion (“pa“) pancake “jeon“). Hence, it’s very similar to Chinese scallion pancakes. But normally, we think of the Korean pancakes with a number of extra ingredients like shredded veggies, seafood, kimchee and meat. They’re also a bit like savory crepes; or, if you take out the flour, an omelet or frittata.

It’s simple pan food, just the kind of stuff I need on a weeknight when there’s “no food in the house.” Plus: 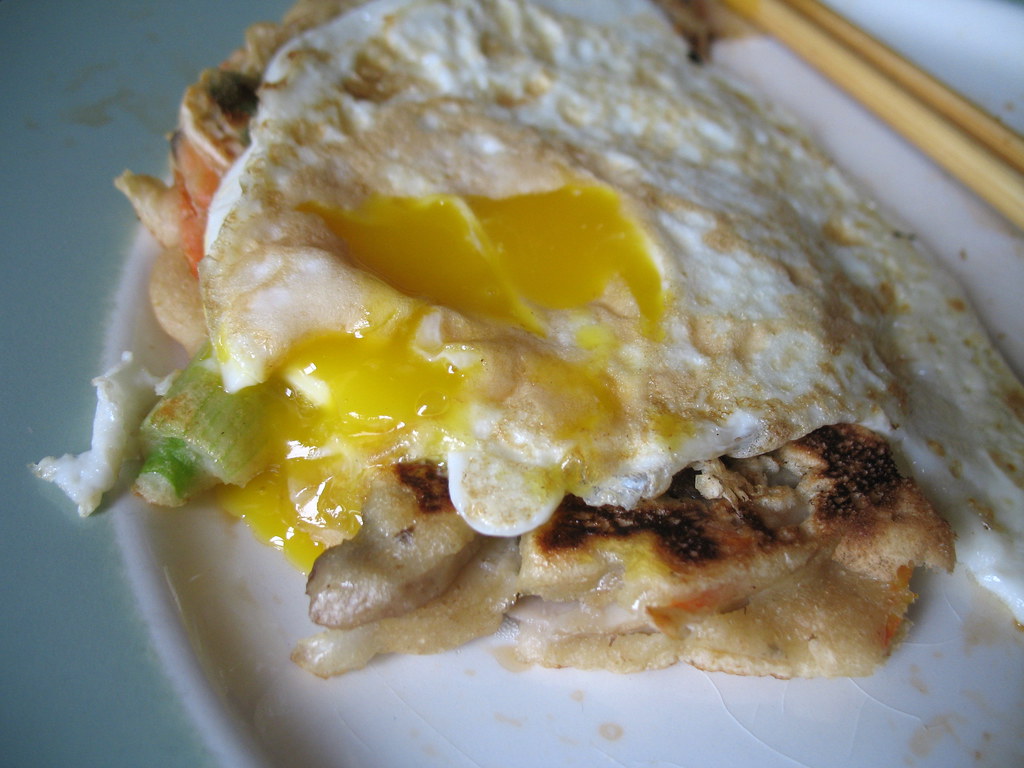 I didn’t even have to go to Chinatown (or Koreatown) for this. (Although I will have to make a trip to the restaurant supply stores on the Bowery soon, to buy a giant stockpot to cook my *hopefully* winning chili for this Sunday in.) The veggies I put in these pancakes were scallions, sliced button mushrooms, shredded carrots and a bit of cabbage. I hesitated on making my own quick pickled cabbage as a meager substitute for that funky tang of kimchee, which I love, but decided against it. Kimchee is kimchee, and I wasn’t about to replace it with water and vinegar. In the end, even though I’m used to tasting Korean pancakes with some kimchee in it, I really liked this version in its own right. They taste more fresh and light. The vegetables have the crisp-cooked texture of that just-wilted stage, hopefully with a little caramelization from touching the pan. 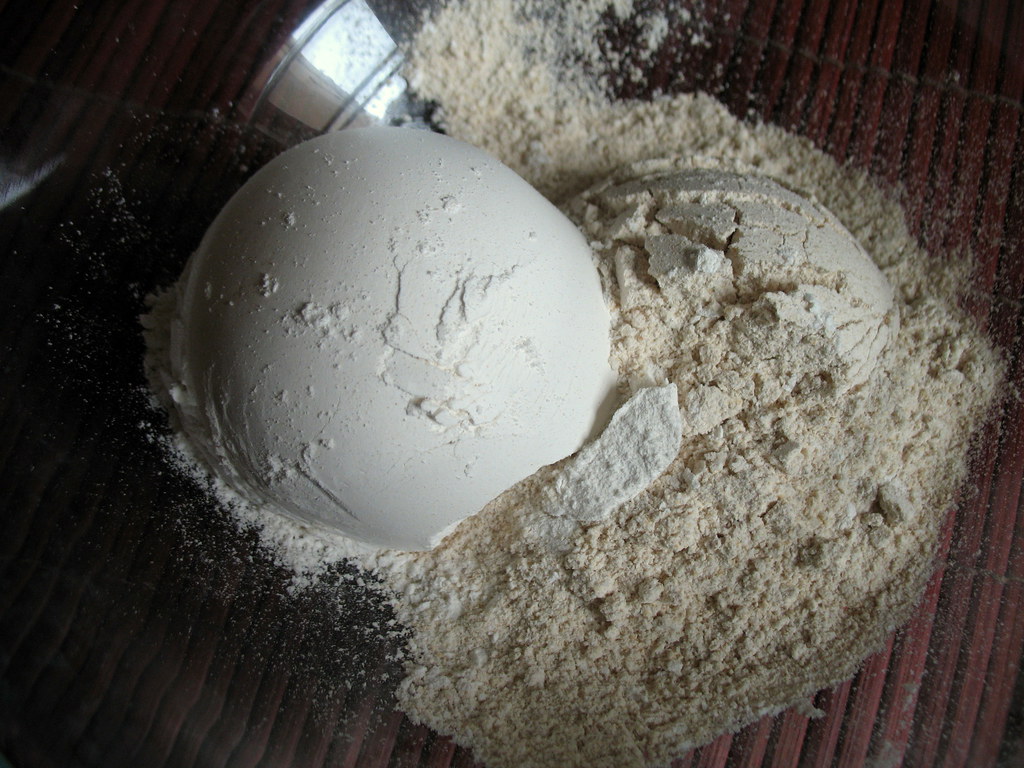 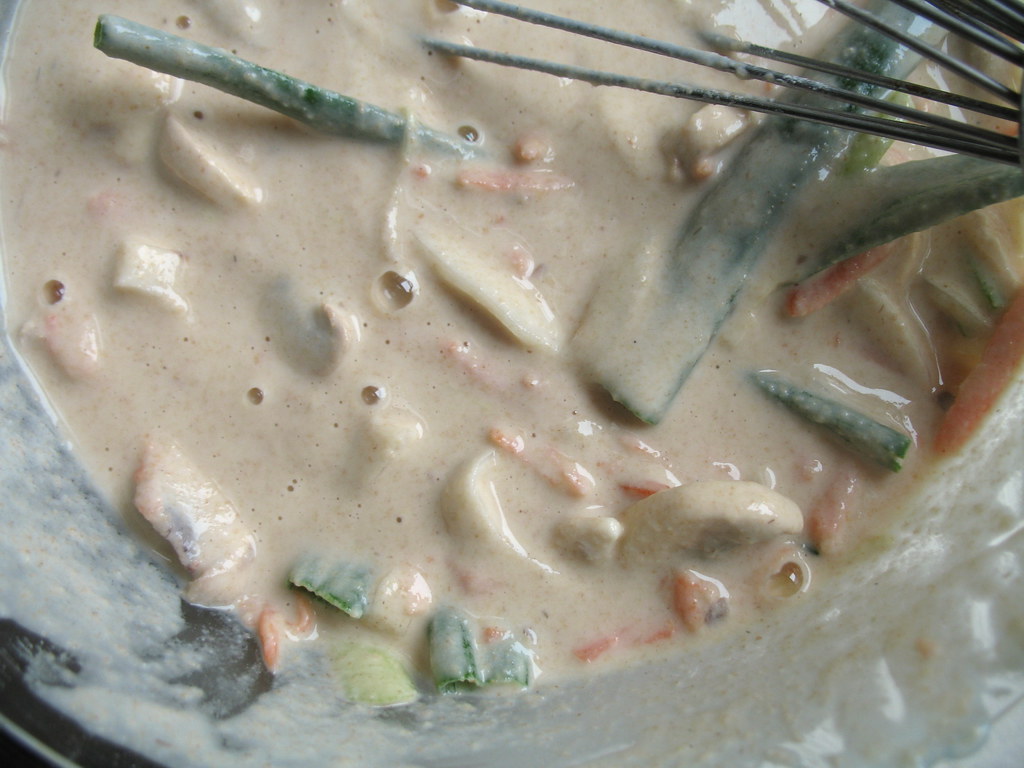 Stuffed with more veggies and stuff than pancake batter is how I like my Korean pancakes. While a nutritionist would already give this a thumb’s up, I decided to make them a bit more healthy and use half-whole wheat flour along with all-purpose flour. (You know, I had to break the rules somewhere.) Previous trials have made me wary of swapping in whole wheat with reckless abandon, but as long as we aren’t baking and don’t mind the taste, I think whole wheat flour can do no harm with these. 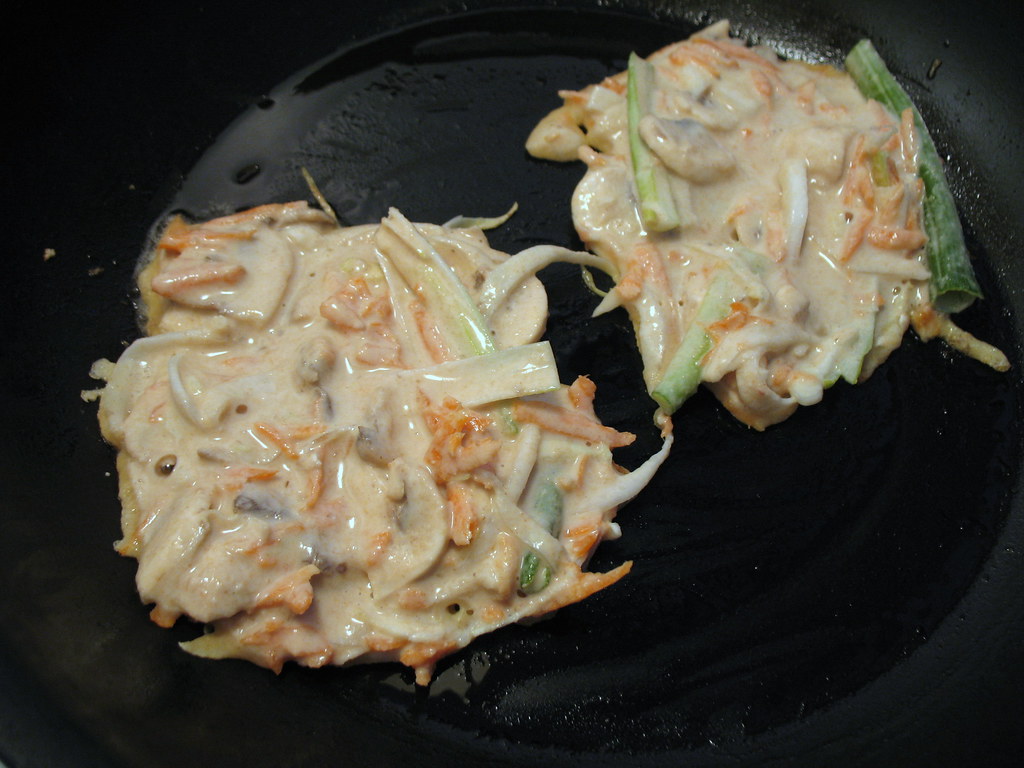 
One trick I picked up from a long-ago supper club dinner was to put carbonated water in the batter instead of tap. This was taught to me by the evening’s Korean pancake specialist, a Korean friend of a friend who had been making these appetizers at home since childhood. It’s not that much of an improvement, he admitted, but the splash of sparkling water helped keep the pancakes light and fluffy, rather than dense and boring — and since I feared extra denseness might be the destiny of using whole wheat flour in mine, I went with his advice. They were very light, indeed.

No, the “dipping sauce” is not just soy sauce, and I don’t even dip anything in it. It’s half-soy sauce, half-rice vinegar (white vinegar should do just fine), and I prefer to drizzle a little on top of my pancake with a spoon, sort of like drizzling maple syrup on Western pancakes. Personally, I find drenching the better part of one mouthful of a crispy, spongey pancake in soy sauce revolting. There is a misconception about the use of soy sauce, which in my upbringing has always been sparingly. I think it has something to do with the fact that Chinese take-out restaurants give away packets of soy sauce (don’t get me started on the “duck sauce”) with every order, as if you’re supposed to pour it on the already seasoned food. Very suspect. It may also be due to the English translation for the seasoning liquid as a “sauce.” But it’s not really a sauce on its own, usually. It’s more like salt. At home, a small sprinkle of soy sauce on eggs or leftover soupy rice is the lazy cook’s answer to making food more palatable, but unless it has a few slivers of fresh ginger or chopped scallions floating on its surface, one wouldn’t think of serving it in a bowl as a “sauce.” 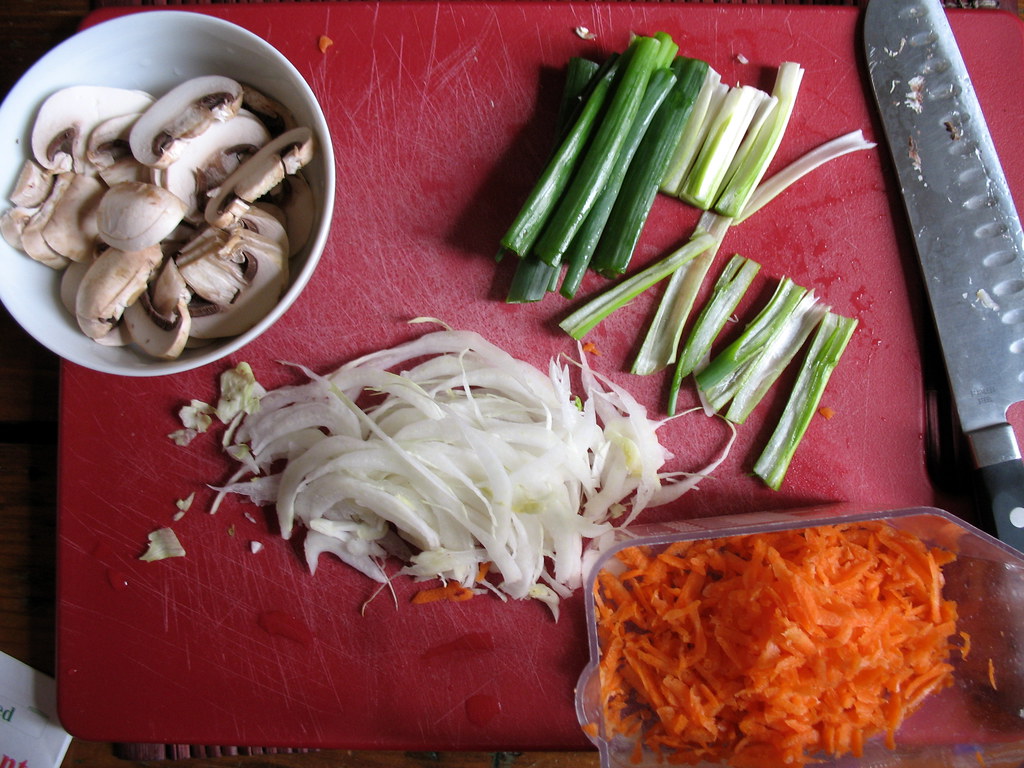 In any case, this recipe is also very versatile; swap in whatever fresh veggies you have or prefer: spinach, shredded radishes, celery, or meat and seafood. When going for an entire, cheapskate meal, try plopping a fried egg on top of your finished pancake.

Sift the flour and combine in a large bowl. Whisk in the egg and seltzer until there are no lumps. Add the salt, pepper, and the vegetables and stir.

Heat a large pan with enough oil to fully coat the bottom over medium-high heat. Ladle a scoop of the batter on the pan at a time, working in batches (probably of two). Check underneath the pancake after a couple minutes, and flip before the pancake batter on the top begins to cook (it should still be liquid by the time you flip — just like cooking regular pancakes). Cook another couple minutes on the opposite side. Remove from pan, add more oil to coat, and repeat with the rest of the batter. Serve pancakes with a mixture of soy sauce and vinegar, or hot sauce on the side.

Four brownie points: Crispy appetizers like these tend to be greasy, oily affairs, but after a few ladles and flips on the pan, I found that less oil turns out the best pancakes. I like the slight burnt patches that happen when there’s less oil on some parts of the pan, and figure that the most minimal coating of oil each time the batter is poured on, the better. These cook pretty quickly anyhow.

Six maple leaves: I tried to use seasonal veggies only. In the summer, when zucchini and summer squash are in store, these will be a lot of fun to make again.