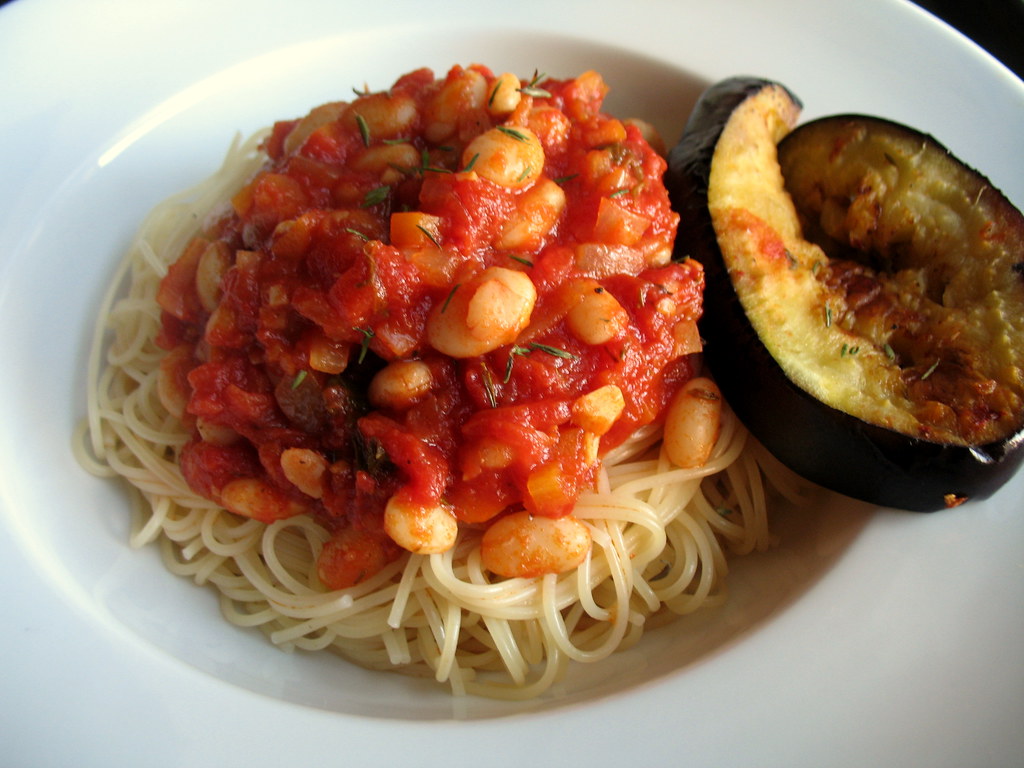 The problem with soaking dried beans, which isn’t a probably exactly, and wouldn’t be one in the first place if you’re a little better at stomach-eye coordination as I am, is that you’re usually left with far more beans than you had bargained for. Water plumps up the beans, sometimes creating pot overflows and dried, un-soaked portions at the top. (It’s a bit like planting a magic beanstalk, with less fees, fies, foes and fums.) Ever since the Cassoulet Cook-Off, I’ve had beans coming out of my ears. White beans, Great Northern beans, to be exact. Beans can be frozen like this and thawed later, but they’re best eaten soon in some clever way.

White bean fried rice, anyone? That was one of the lesser efforts of last week. This deconstructed pasta e fagioli, on the other hand, seemed to make much more sense. I wasn’t really in the mood for a soup. The traditional Italian bean and pasta peasant dish, pasta e fagioli, varies in thickness, but often involves a tomato broth. I was in the mood for pasta, long, thin strands of spaghetti-like pasta, and with beans in the sauce, why not? 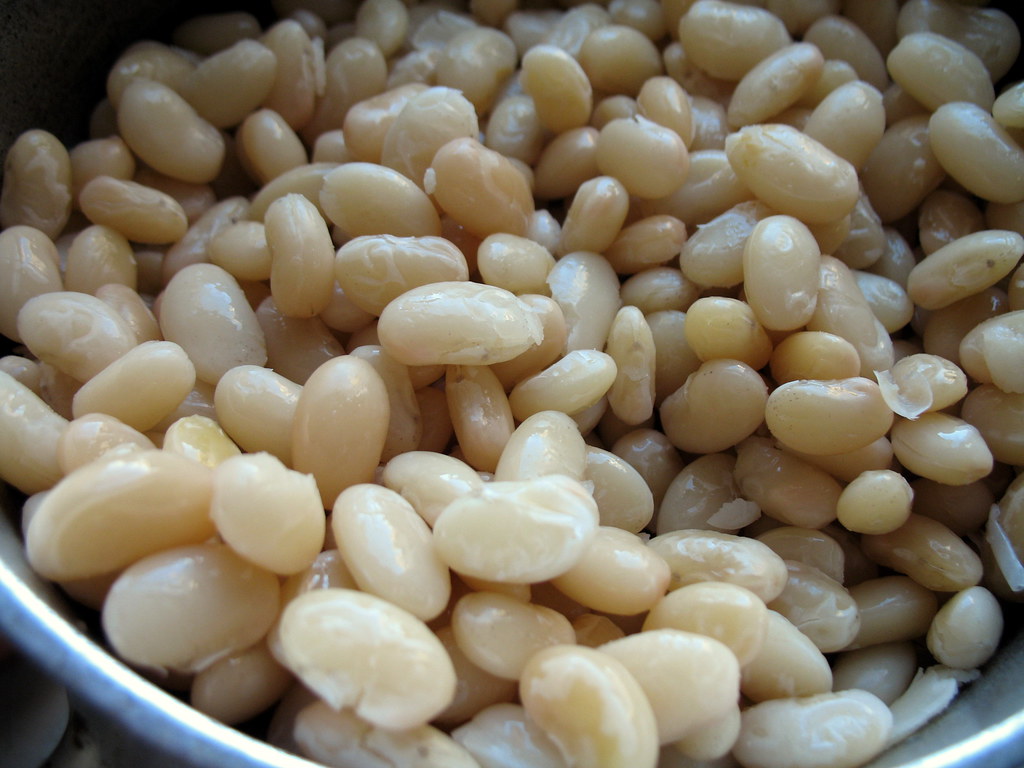 good for your heart (enough said)

I began with a simple, meatless mirepoix of onion, carrot and celery, and built it up with whole canned tomatoes and fresh thyme. It simmered for an hour or so before adding the beans, which cooked into the sauce while giving it some thickness. That was pretty much that, a homemade tomato sauce with beans instead of meat. And now, instead of just beans, I’m left with a giant container of it.

Why the eggplant on the side? It’s the middle of winter, and last I checked, eggplants grow in the late summer. As I was strolling my local grocery store for canned stuff, I saw these eggplant slices wrapped in cellophane and tossed in a discount bin. They were beside a great deal of other produce — somewhat soft peppers, tomatoes, wrapped bruised apples and oranges — that the store was trying to save from the dumpster by selling on the cheap. I appreciate that. So does my wallet. So I figured a side of roasted eggplant for this comforting Tuscany-meets-budget-friendly-Brooklyn lunch. 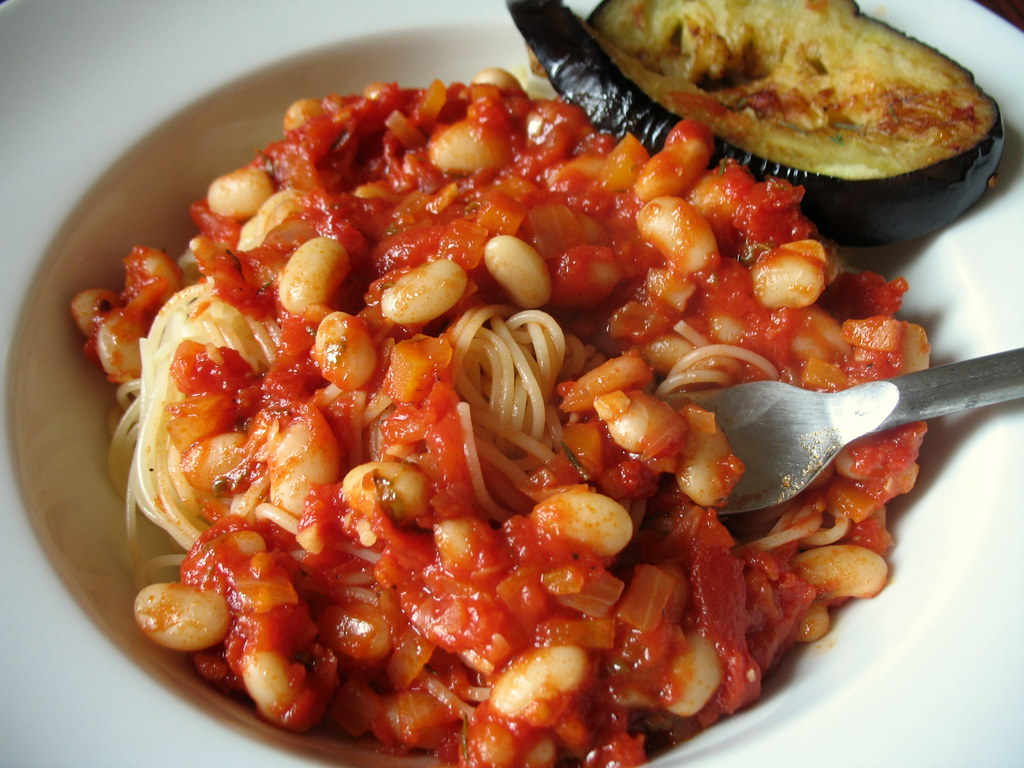 This dish might sound a bit plain, but after spending three and a half days creating some of the most insanely complex courses and gorging myself on the makings of them in San Francisco for the last hurrah of the A Razor, A Shiny Knife “Breaking Bread Without Boundaries” series, you can bet I’ll be pleased with peasant food right now. The rest of the gang has settled for peanut butter and jelly all week.

Heat olive oil in a large, heavy-bottomed pot or Dutch oven. Add the onions, carrots and celery and cook over medium heat, stirring occasionally, about 8 minutes. Add the garlic, red pepper and dried spices and stir another minute. In a separate bowl, crush the canned tomatoes with your hands to small, pulpy pieces. Add the tomatoes along with all juice to the pot. Add the bouquet garni and bring to a boil. Reduce heat and simmer, covered, for 1 hour.

Add the beans and continue to simmer, stirring occasionally, over medium-low heat for 30-40 minutes or until beans are tender. Taste for seasoning. Uncover or cover partially to cook off excess liquid. When taste and consistency is correct, remove bouquet garni and discard.

Meanwhile, place eggplant rounds on a sheet and sprinkle with salt. After 15-20 minutes, carefully squeeze or pat the slices dry (droplets should have formed at the top). Preheat oven to 400 degrees. Drizzle olive oil on both sides of eggplant and season with salt and pepper. Roast for about 6-7 minutes. Release from bottom of the pan with a spatula immediately to prevent sticking.

Cook pasta to al dente. Serve with the sauce and a slice of eggplant on the side.

Three brownie points: Good news — the most budget-friendly recipes are often the most healthy, too. No, you don’t have to spend nine hundred dollars a month of baby salad green mixes that go bad in one day. This dish might not give you greens, but it’s excessively low in fat and provides a fairly well-balanced meal: protein, carbs, a veggie-heavy sauce along with tasty eggplant for even more Vitamin C and Vitamin K.

Five maple leaves: It’s not seasonal, but I’m calling the use of eggplant in the dead of winter green, only because of the about-to-expire situation at the grocery store. I’ve probably mentioned this more than once on this blog before, but stores that offer this option — discounted produce when they’ve passed their prime — is a neat way to spare a little cash and food waste. Farmers’ Markets frequently offer this option as well. Aside from the celery, the rest of the ingredients here are either seasonal or found canned or dried.