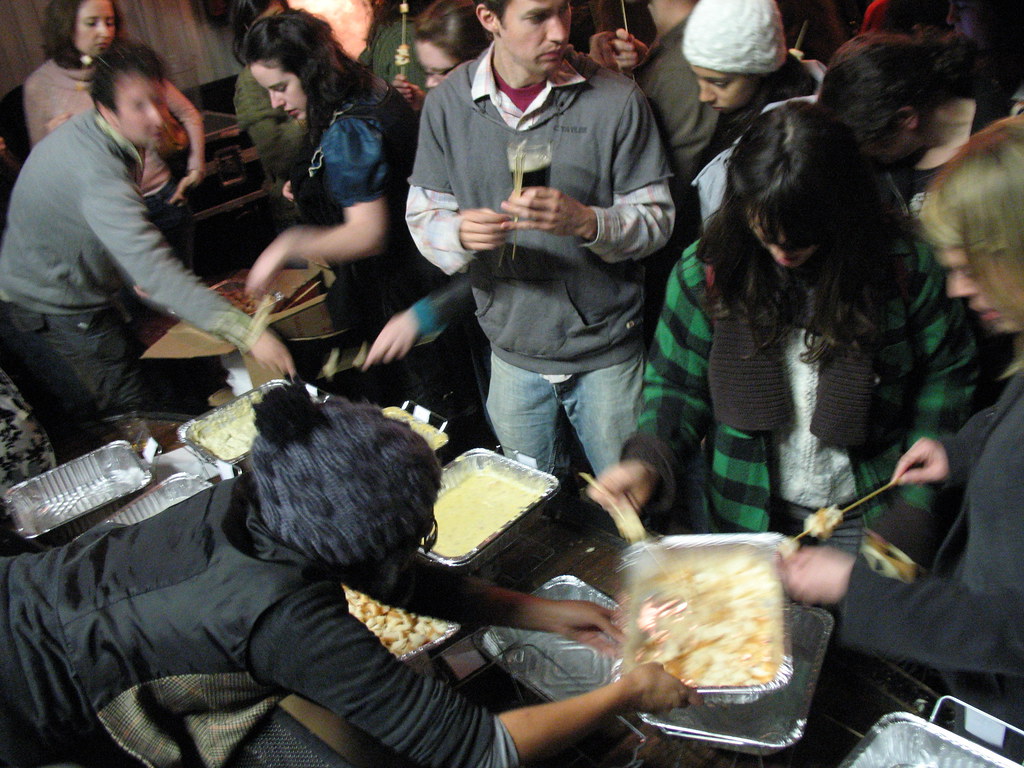 I think the makers of those aerosol cans of spray-cheese need to merge with Silly String. Then we’d have the perfect, edible orange goo to epitomize the celebration that was the second Fondue Takedown this past Sunday. And to clobber the winner with for a photo — “Say Cheese!” So maybe Sunday night’s winner was spared of the cheese sliming (she was wearing a handmade apron, though), but the back room of Union Pool, Brooklyn’s popular bar and now mecca to cook-offs, was not. Venerable Chili Takedown host Matt Timms told me the clean-up afterward was something epic and, well, kind of stank.


To keep the competition relatively level, Matt decided to limit the playing field to cheese fondues only — thus eliminating the age-old question of what’s awesomer, chocolate or cheese? Despite this attempt at creating order, the twenty or so fierce fondue makers challenged every aspect of what we have come to know of as a simple party snack. There was a fondue with ground-up oysters and pork meatballs; one with clams; one with braised short ribs and rosemary sprigs. Extra flavorings ranging from brown sugar and peach schnapps to tomato chutney and dill. Cheeses of all ages and animal milks — melted to uniform, United Nations of Smelliness. Among the chefs, there were usual suspects like myself and — well, I’m not sure how much diversity there was among us, seeing as I’d met about half of them at previous cook-offs. 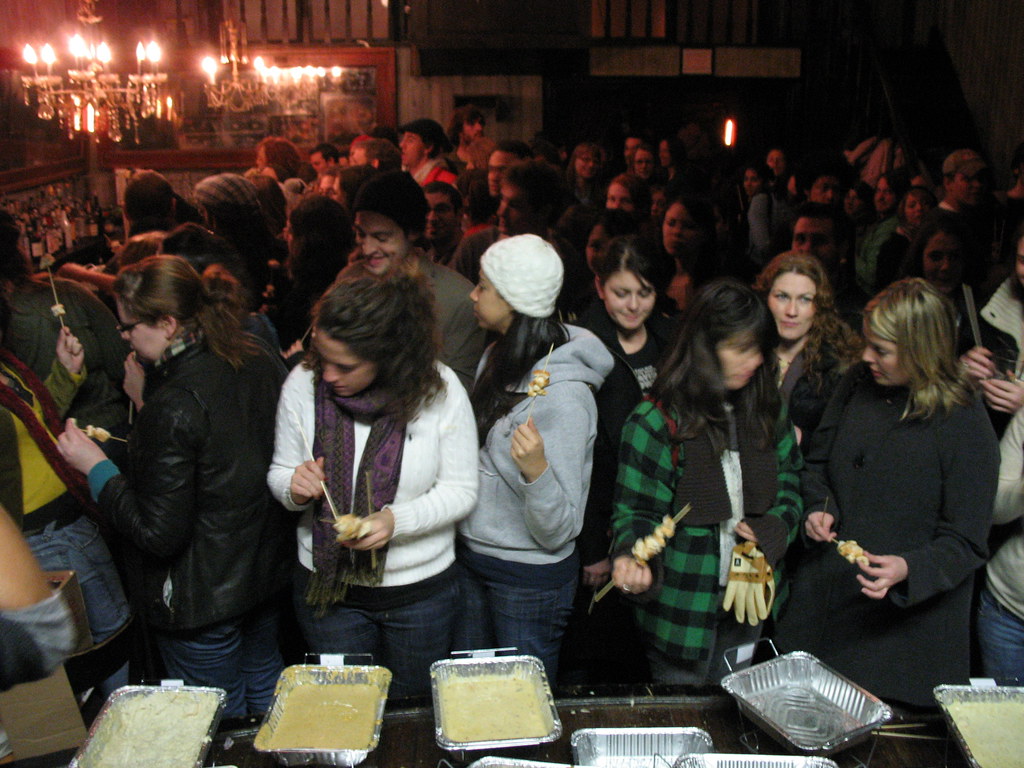 tasters battle it out for a dip 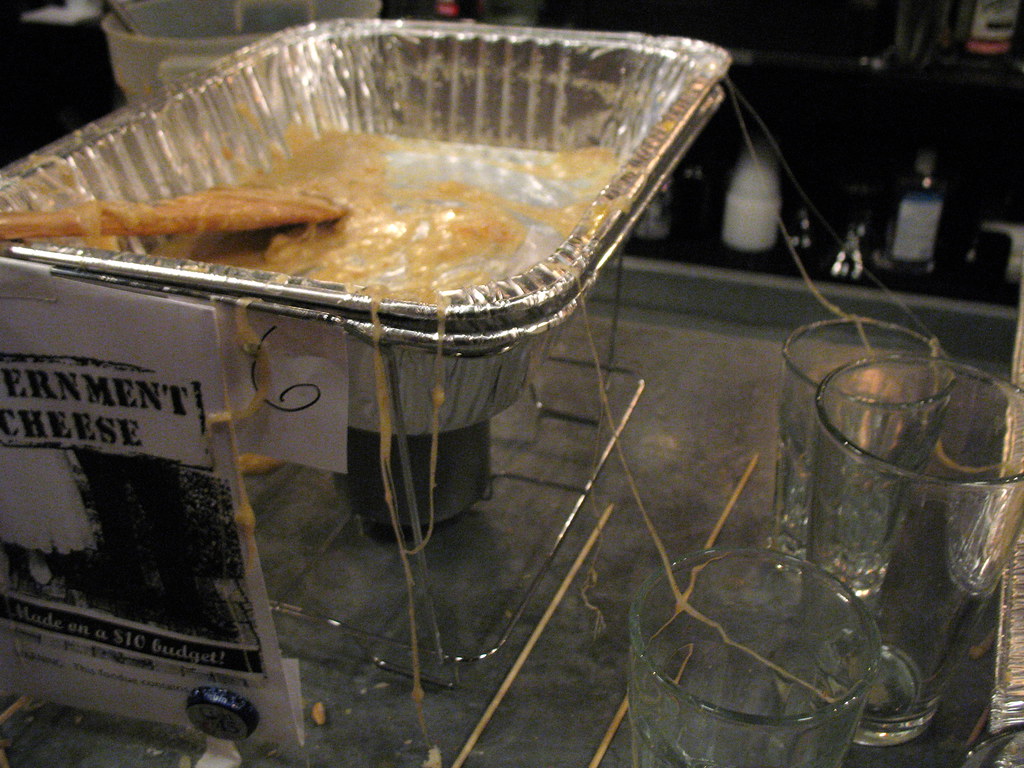 There were clearly some sophisticates in the crowd aiming to up the ante on fondue’s already gourmet standing. Then there were those who took the opposite stance: like Karol, whose yellow-orange “Government Cheese” fondue nodded to military-issue cheese food and incorporated leftover Colt 45. For my part, I created a somewhat classic, French-tasting fondue with a base of reduced white wine and sherry, carmelized onions and browned bacon. My four-cheese blend relied heavily on Swiss cheese, with some bleu cheese, Parmesan and Monterey Jack (for extra smoothness). Finally, a pint of heavy cream and about a stick of butter made for a velvety, molten mixture. Once it was seasoned and smooth enough to stir whirlpools that stayed on its surface a few moments, I wiped my hands clean and walked away. The stuff could clog my arteries just from looking at it. 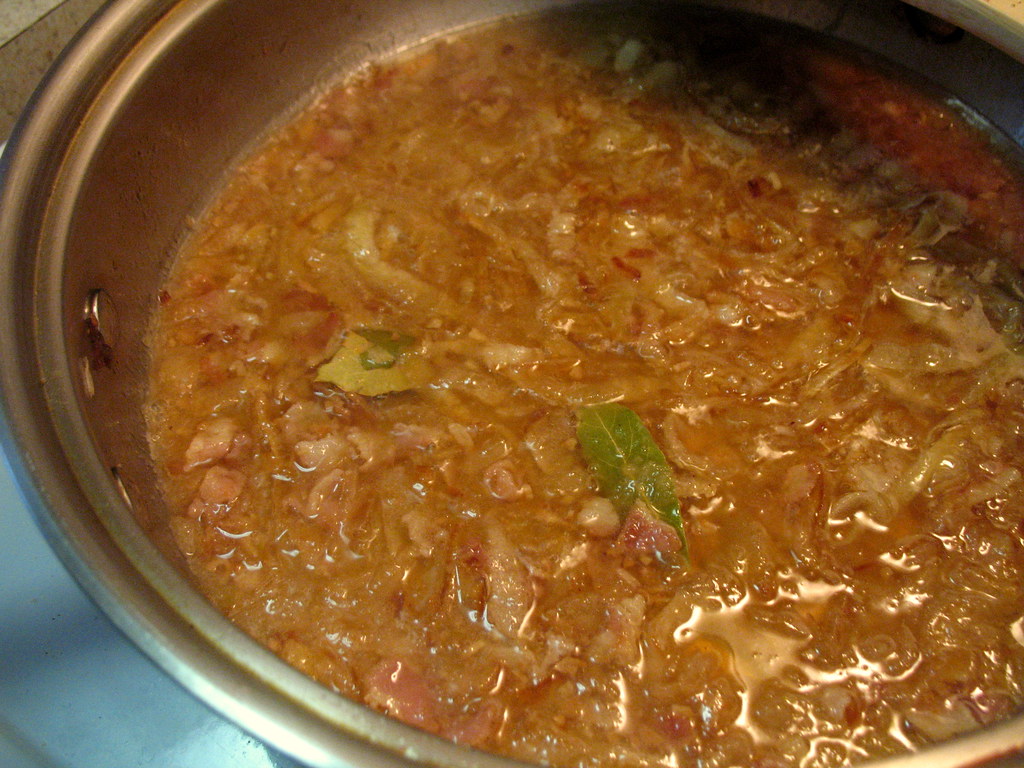 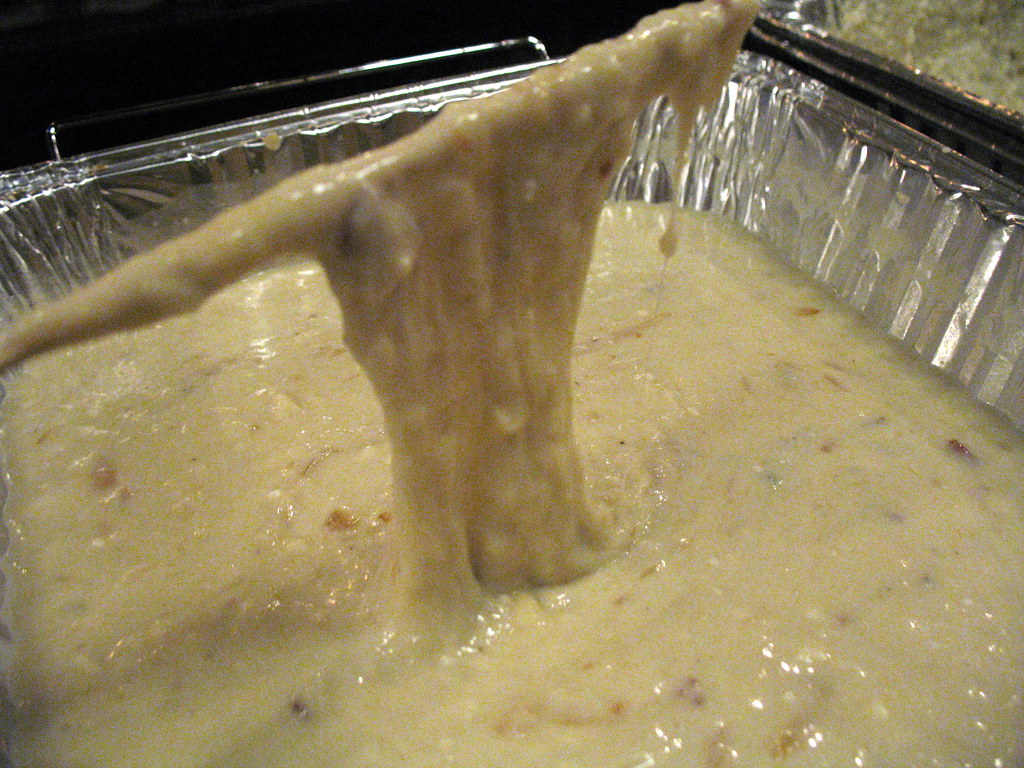 the meltdown: my “French-Tasting” fondue

So, who was the ultimate Cheese Whiz? Unlike previous Takedowns, this one had only one judge: the audience. With a hundred people or more filling the space, you can safely assume the popular vote was pretty fair. In third place was a pesto-ish concoction with ground fresh basil and parsley aptly named “The Incredible Hulk,” made by Vaddie Turner. 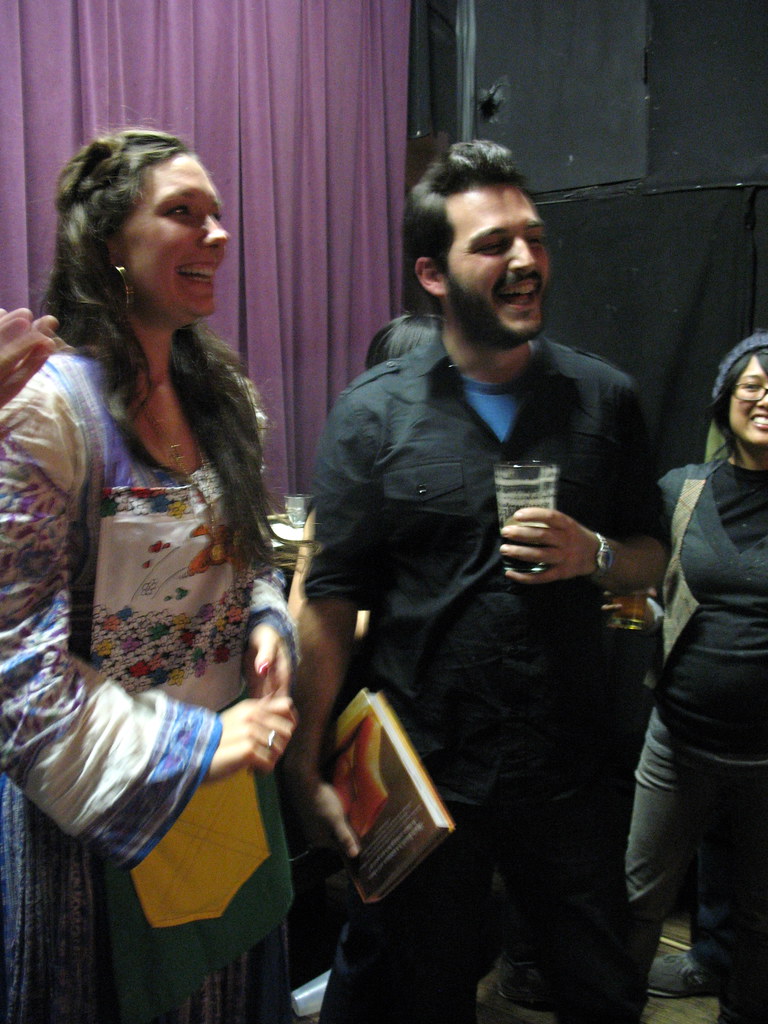 When it came to naming second and first-place winners, Nick Suarez and Jaimee Veronneau were brought to the center of the stage. Nick’s fondue boasted probably the most elaborate presentation, with tender braised short ribs and fresh rosemary on top. He also confessed to going broke from making it. My next-tray neighbor Jaimee, on the other hand, stuck with a relatively simple recipe for her first time at both making fondue and entering a cook-off. The orator paused for a moment of suspense. Then the winner was announced: by a hair, Jaimee’s fondue had cinched the win! For the victory, she took home a cash prize of $100. And for second place, Nick received a Mario Batali cookbook that he already owned. (Do I smell a rivalry brewing in anticipation of the next Takedown?) 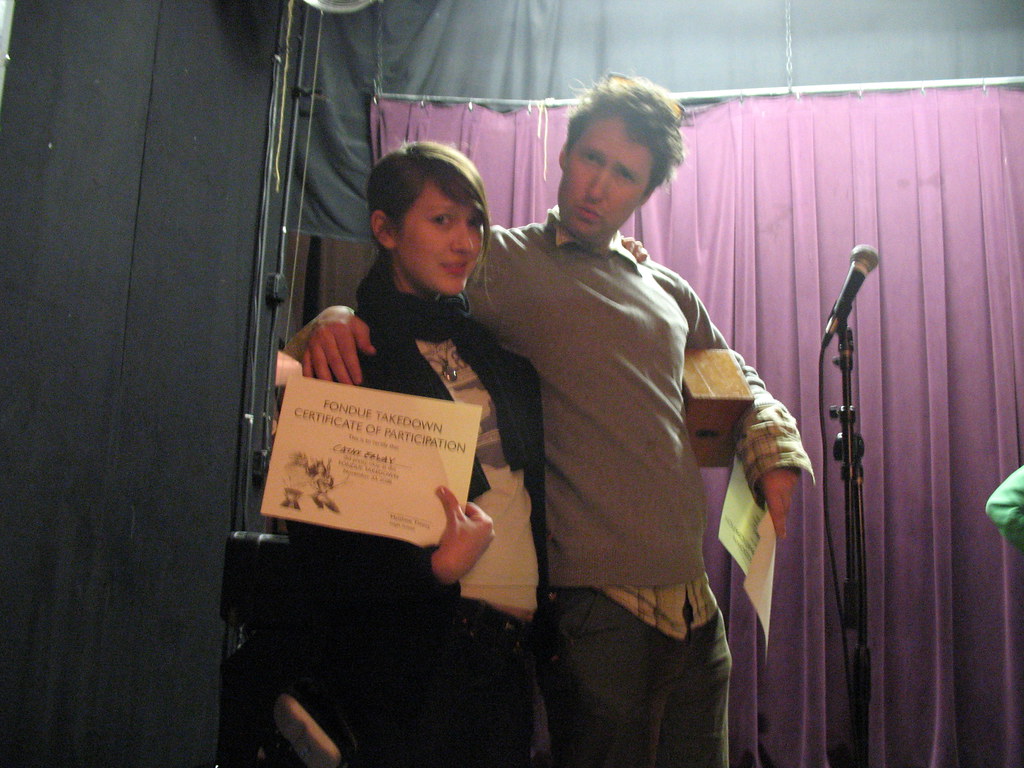 and for my prize, a certificate of losership and a pose with Matt Timms

Congratulations to Jaimee for trouncing the odds — and for providing me with one of the simplest winning cook-off recipes to post for home readers. (And from the looks of it, it’s pretty similar to mine!) Here it is, exclusive to Not Eating Out in New York.

Melt, stir, and serve with bread.