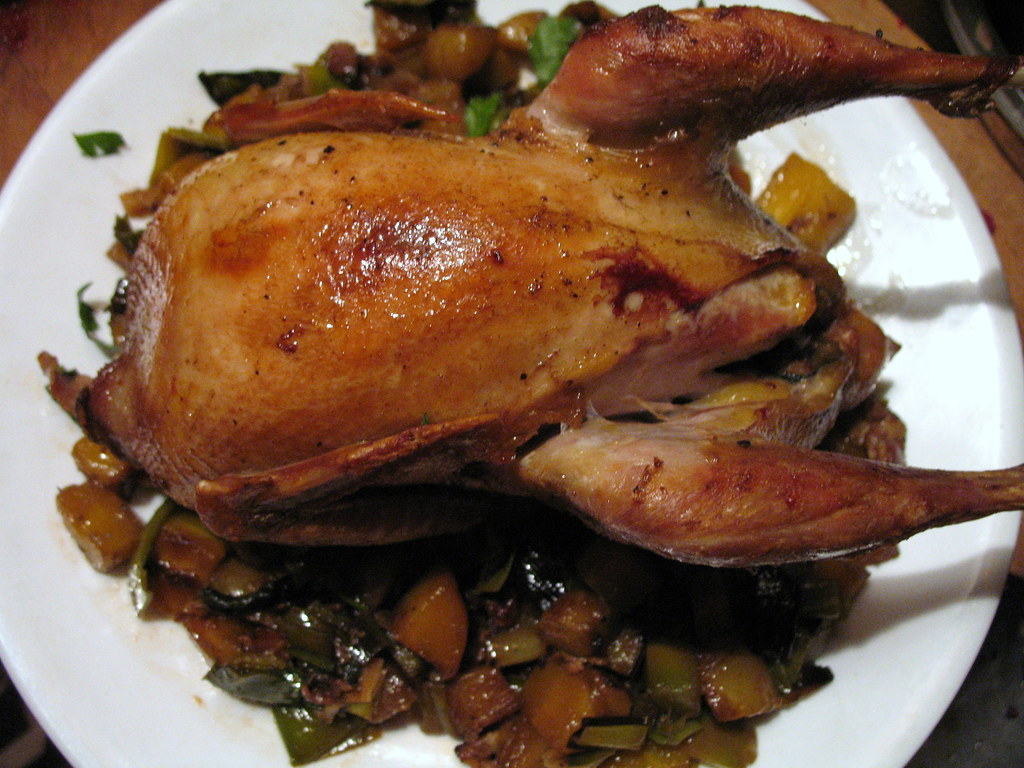 Now that everyone’s hopefully got their turkey situation squared away, and are just about fed up with the annual Thanksgiving-food buzz (to brine or not to brine? Best seasonal stuffings?), I thought I’d take a moment to highlight a few overlooked birds of the feather. First up: pheasant! Isn’t that a lovely word? The live bird, too, is known for its exceptional beauty. And friends, fowl-lovers, foodies or not: the meat of the pheasant is equally astounding. Especially when it’s a pasture-raised, all-natural ring-necked pheasant produced through the ever-humane and conscientious care of D’Artagnan.

As a city kid, I’ve had few encounters with game birds, unless it was being served at an expensive restaurant (and you know how I feel about those). Little did I know how juicy, dark and unctuous its meat could be in comparison to chicken or turkey, even the more flavorful, free-range ones of the lot. Also, I knew little about how to prepare them. Birds like pheasants, quails, squabs and Cornish hens run smaller than those familiar species, making them less economic to cook for one’s family. This has no doubt contributed to lending them an air of luxury. But in a time when fresh seafood falls into the home cooking repertoire so often, it’s one that I feel somewhat undeserved. The holidays are all about indulging in a little luxury food, too. So why was it that I had never tried roasting a pheasant before? 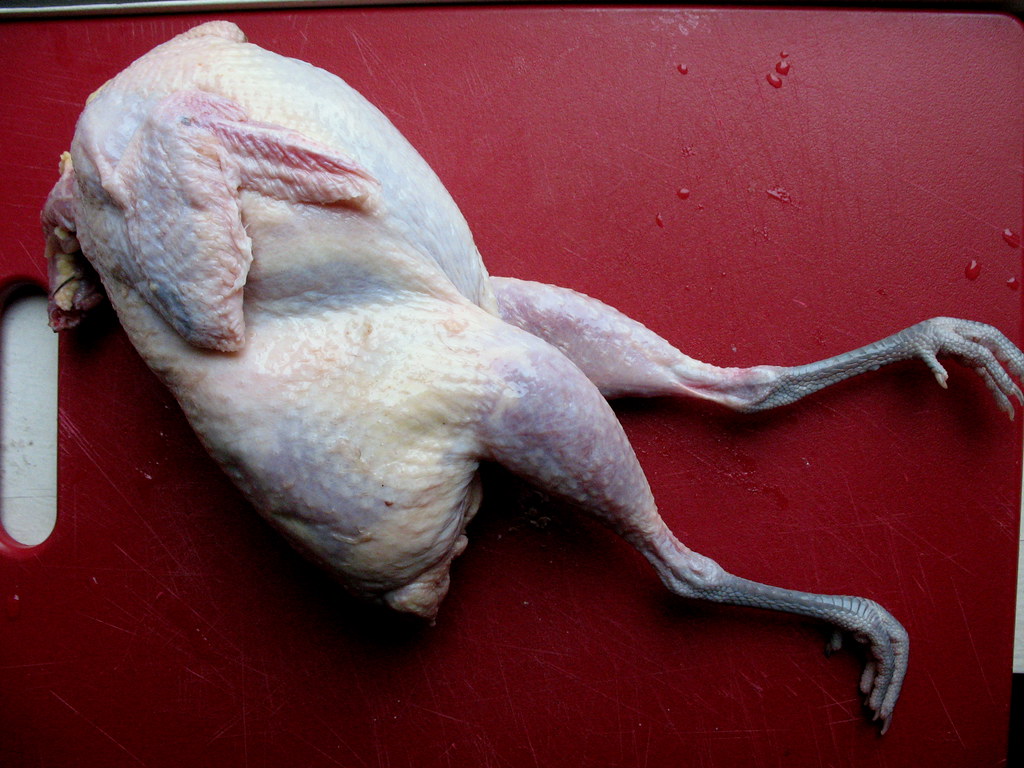 removing the feet at the joint ain’t no obstacle.. 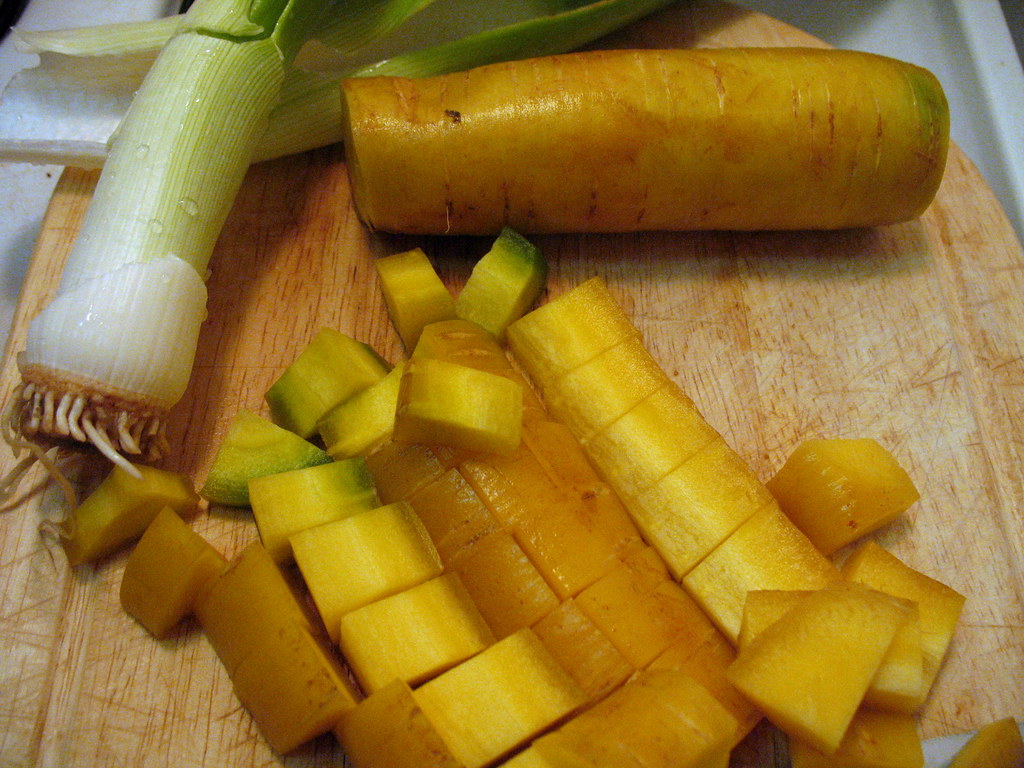 chunky yellow carrots and leeks from the Greenmarket

Enter D’Artagnan. While doing research for this story on free-range turkey, I found that so many stores stocked meats from D’Artagnan. Also, that the supplier offered such a range, from Merguez lamb sausages sold at Fairway to whole heritage turkeys available through Greene Grape Provisions. With their longtime support of small farms, and environmentally-friendly philosophy, I quickly became a fan. I had the pleasure of chatting up a D’Artagnan representative at a party some months ago, and this series of game bird recipe posts was the result of my re-connecting with her. 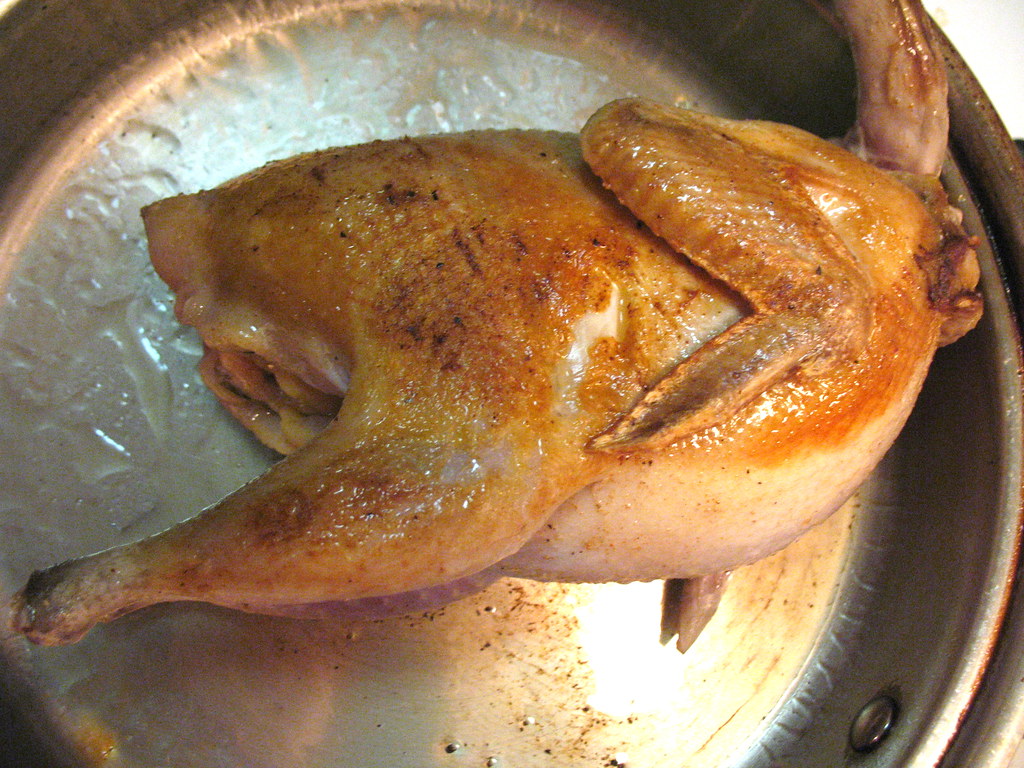 step 1: brown the bird on all sides 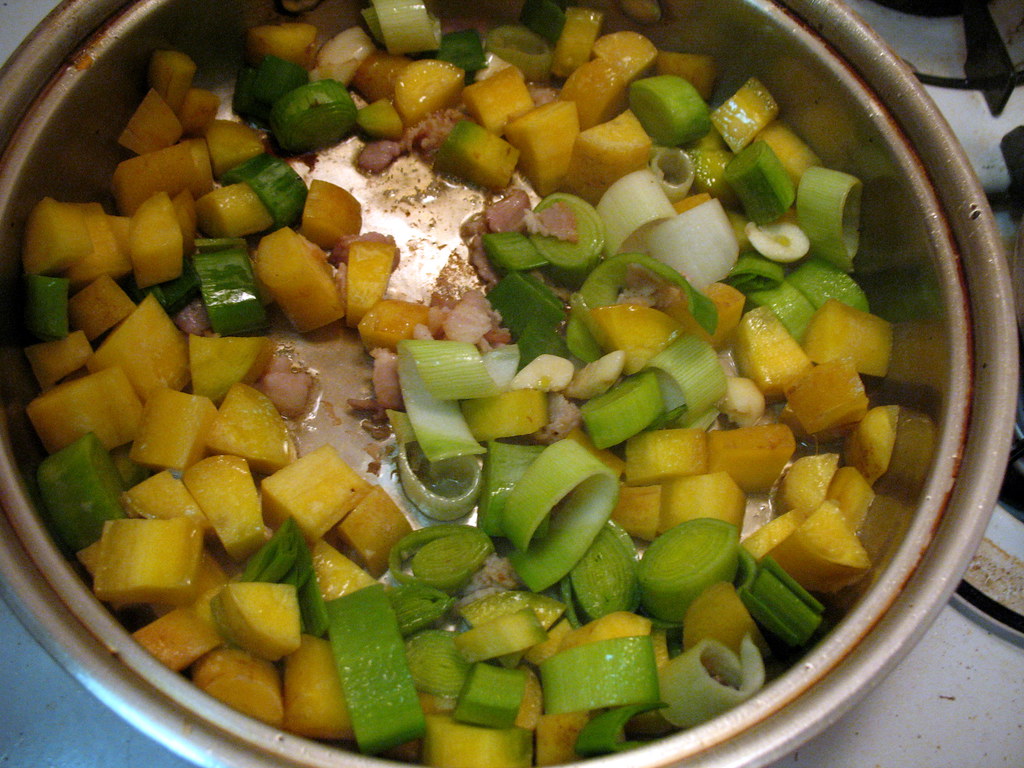 step 2: soften the vegetables with a bit of bacon

So, on we go with the pheasant fun. The simplest of methods can indeed be the best, and I’d had half a mind to simply stick the bird in the oven and experience it straight-up. At the very least, I wanted to produce an easy, weeknight-friendly, one-pot dish. So with a handful of savory vegetables and a couple strips of bacon, I decided to first brown the pheasant in the same (oven-safe) pan as the veggies, and toss the whole combination in the oven to roast. No brining was done beforehand, as I didn’t want to alter the flavor of the pheasant too much for my first tasting it. I did rub salt, black pepper and a sprinkle of cayenne pepper on its skin once it was rinsed and patted dry. 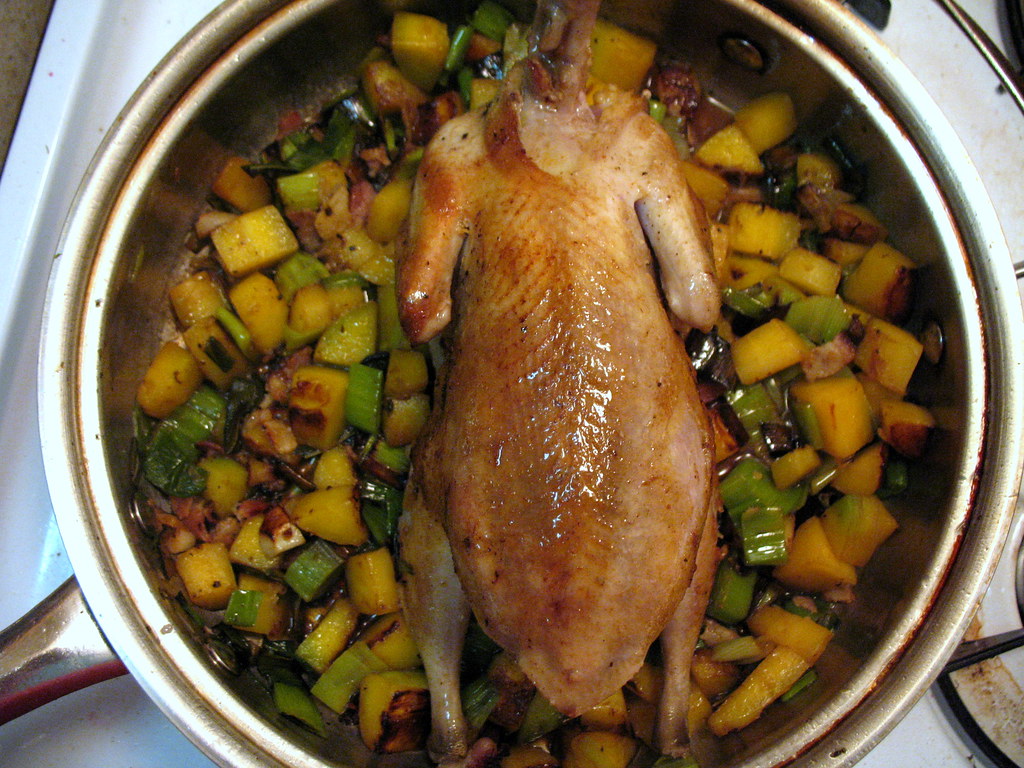 step 3: return pheasant to the vegetables and roast together

When it came out of the oven, the vegetables had soaked up the rich juices and fat from the bird, and were tender and ever so slightly burned in the most delicious way. The roast pheasant meat was truly the star of the meal, however. I served this to a room full of friends as part of a countless-course, “Fall Harvest Feast” potluck/communal cooking night. We found the pheasant easy to carve, since it was small, and so tender to boot. The perfect bite, I found, was a piece of breast meat with a strip of crackling skin on it, piled onto a fork with a stab of the vegetables. No gravy necessary, just the au jus-drenched vegetables and a twist of fresh pepper if you’re fond of that. 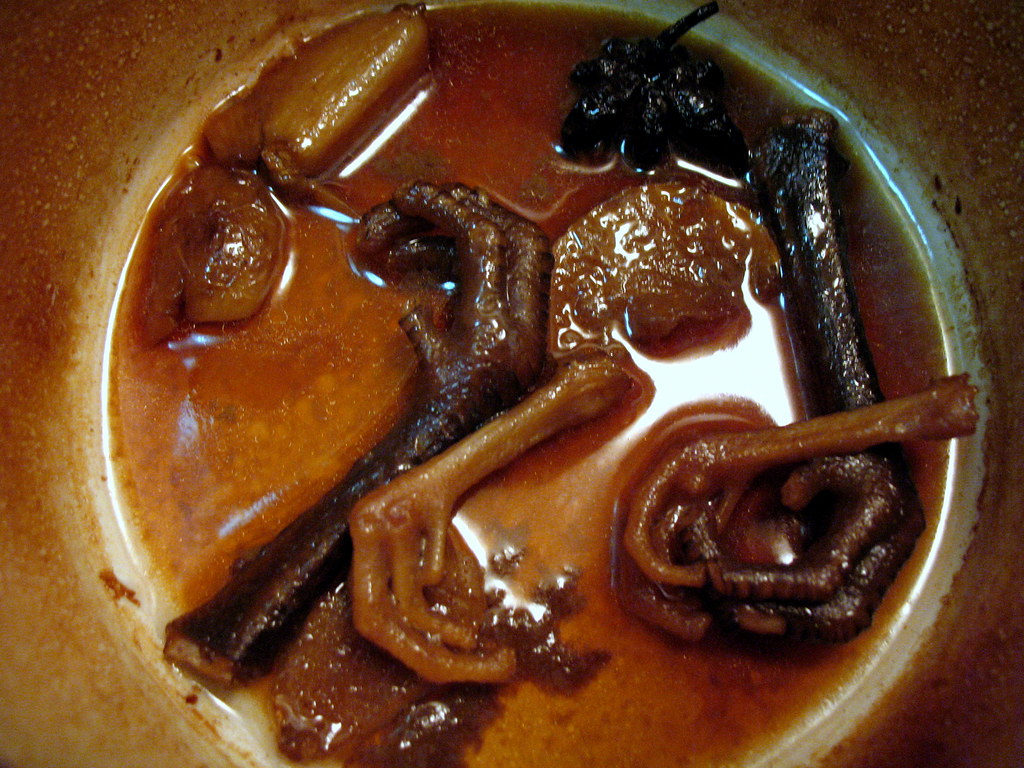 Finally, in case you’re wondering what I did with the feet… this is perhaps only for the brave, but I stewed the little claws with some crushed garlic, ginger, soy sauce, rice wine and a five-star anise clove. To anyone familiar with dim sum-style chicken feet, you might know that the real pleasure in the dish is its sauce. There’s really nothing on the bones but a bit of skin and gristle to chew on, and with these tinier pheasant feet, there was even less. I’m not convinced that with a bird of this size the execution is well-advised, but it did make for fun before-dinner snacks to pass around at our party. In fact, if you ever feel like measuring your friends’ foodie personalities, I’ll advise this dish as a way of identifying the truly gung-ho of the flock.

Rinse pheasant and pat dry. Rub with salt, pepper and optional cayenne pepper on all sides and in cavity. Heat up a heavy-bottomed, oven-safe saucepan with two tablespoons of the oil. Brown pheasant on all sides, about 2-3 minutes per side, on medium-high heat. Remove pheasant and set aside. Scrape up any burnt bits from the pan and discard.

Preheat oven to 374 degrees. Heat the remaining tablespoon of oil and cook the bacon over medium-high heat for 1-2 minutes. Add the carrots, leeks and garlic. Season with salt and pepper and cook, stirring for another minute. Add the water or stock and cover for about 2 minutes. Turn off heat.

Move vegetables aside to create a clear spot for the pheasant. Place pheasant breast side-up in the center of the pan. Roast for about 20-30 minutes, or until juices run clear and internal temperature of thigh reads about 135 degrees (over-cooking will dry the lean pheasant).


Five brownie points: Pheasants are relatively lean birds, like turkeys. This holiday-worthy recipe is not really focusing on low cholesterol, though, so the skin stays on for flavor and is bolstered with some bacon. The winter vegetables provide plenty of vitamins, making them a great alternative to buttery mashed potatoes.

Eight maple leaves (is that a record?): Before you go bashing on the $35 pricetag for the whole pheasant, consider that a restaurant might charge a comparable price for a much smaller serving of it prepared (and that’s not counting the added-value chicken feet appetizer). That said, supporting small farms that raise the birds, and their distributors like D’Artagnan, has a lot of hidden virtues that in theory trickle back to the consumer — raising demand, etc. Aside from the pheasant, there isn’t anything in this recipe that I can’t say isn’t local, natural, and conscientiously grown via the Greenmarket (aside from salt, pepper and a vegetable oil).