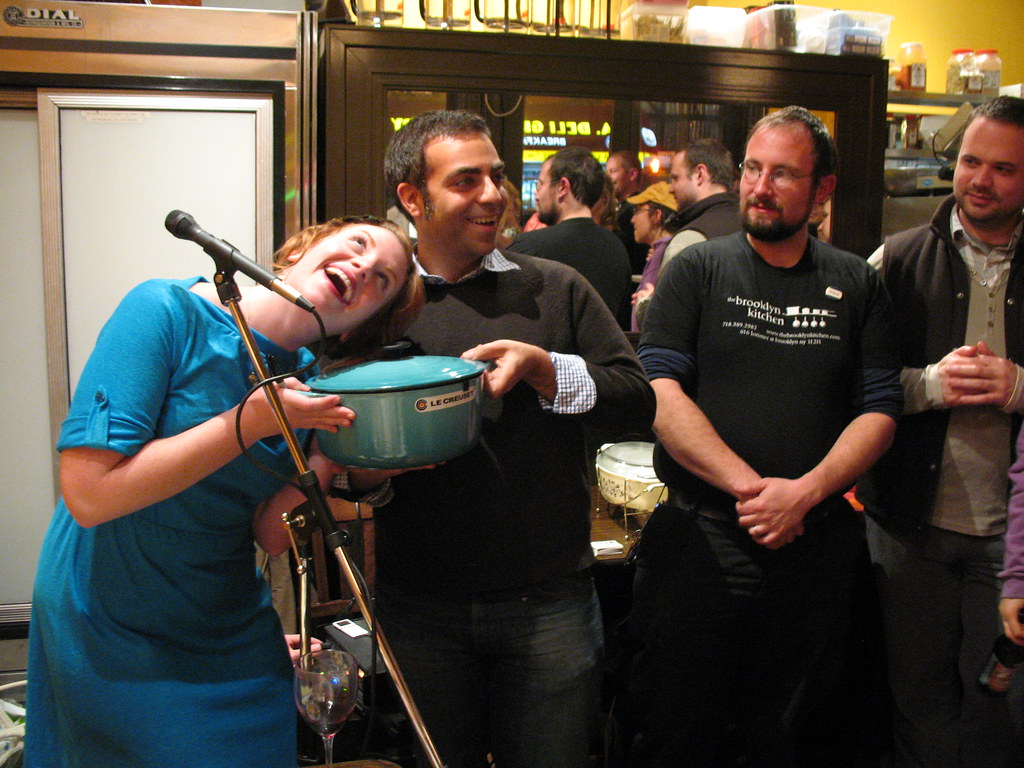 You know what? After all the lovely compliments you’ve given me on my Orecchiette and Arugula casserole, I’m not sure how it would have fared, head-to-head, with the winner of the fourth annual Casserole Party. Nor the rest of the amazing twenty-eight casseroles that were brought to the cook-off this past Monday. Emily Farris, author of Casserole Crazy, has clearly inspired casserole craziness in Brooklyn since she created the cook-off four years ago. Of the very best kind.


This is coming from someone who had to eat and judge the respective merits of all such entries in a single half-hour sitting, so you can imagine my having a case of casserole backlash. Actually, I’ve been a little sick this week with the ever-fluctuating fall weather, and the most soothing food that comes to mind is just that one-dish wonder (that, and perhaps a steaming bowl of ramen). 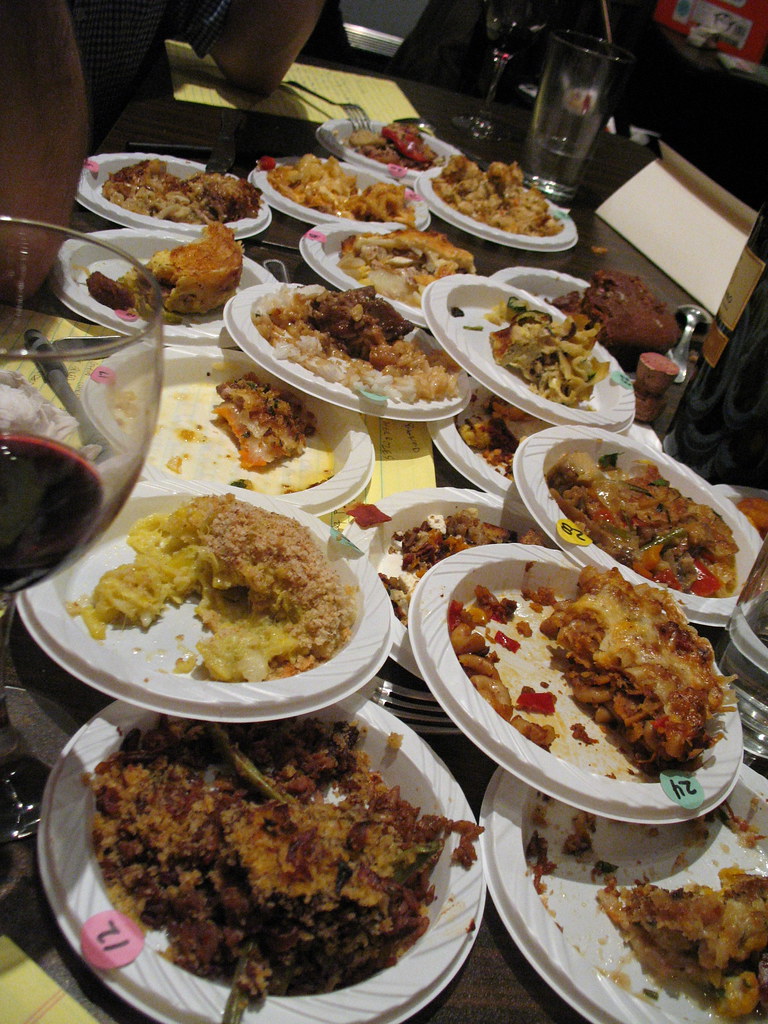 What makes a good casserole? This is the question that my fellow judges Harry Rosenblum (co-owner of The Brooklyn Kitchen), Zach Schulman (first-place winner of last year’s Casserole Party) and I contemplated as we passed around plates of our favorites. Perhaps we should start with what is a casserole. In Emily’s sagelike opinion, a casserole is at least two ingredients baked together with some sort of binding agent or liquid that will hold it together. With that definition in mind, we were swayed to overlook an entry that Zach liked, with wild rice and chunks of sweet potato that tasted great but sort of fell in a dry crumble all over the plate. We also had to ixnay an entry I really liked (which I later learned was made by the chef of Stone Park Cafe!), with terrifically tender short ribs in a sweet, soy-based sauce atop some fluffy, but completely un-sauced white rice. Because the dish wasn’t all mixed together, we couldn’t fathom how it fit into a casserole dish — or why that method of cooking would be appropriate for it. 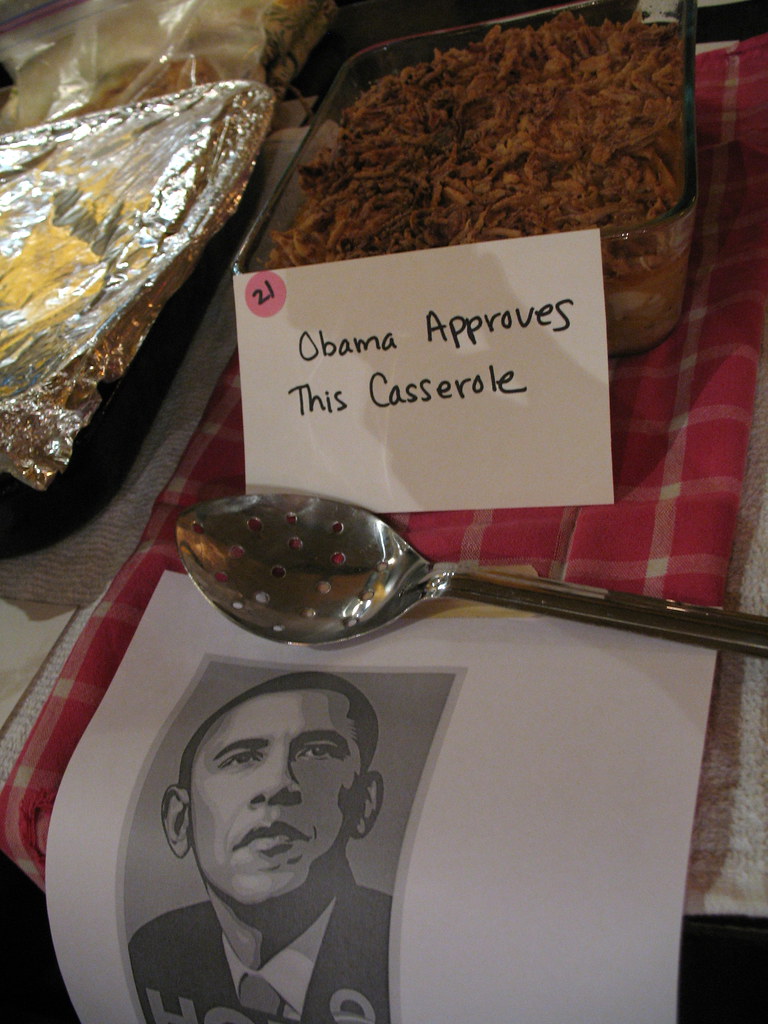 great cooks think alike: the name of Grace‘s casserole had a doppelganger at the recent chili cook-off at Barcade 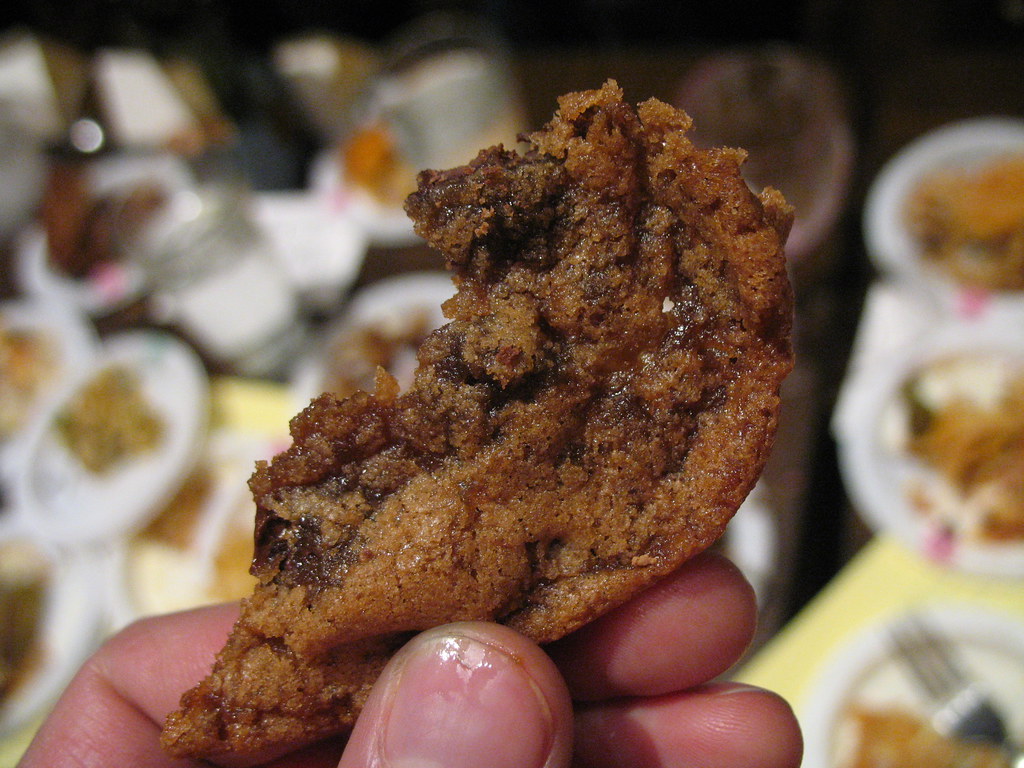 Casseroles have enjoyed wide popularity in home kitchens since the 1950s and one of the reasons why is perhaps its efficiency. You can bake a balanced meal in the same dish to feed a large family all at once. It also has a reputation for economy, traditionally favoring canned vegetables over fresh. But if you forget the canned vegetables part, what you have is basically is a solid cooking model that can withstand countless ingredients and produces at least two distinct textures (crispy and moist). And we wanted to see it used to its best potential. We got what we wanted in many of the casseroles, but had to chose only three winners. 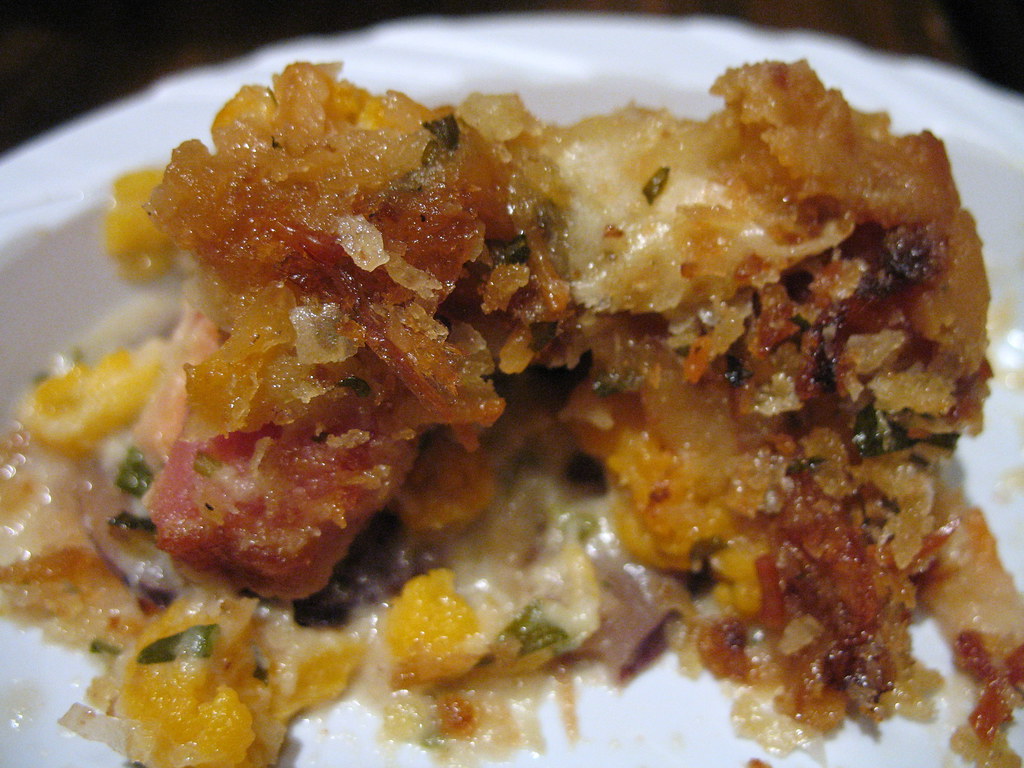 When it came to nabbing the ultimate casserole of the evening, the other judges and I were unanimous. The winning casserole, made by Theo Peck, bound perfectly bite-sized florets of orange cauliflower and thinly sliced purple potatoes in a garlicky, Gruyere-y cream sauce with fresh herbs, some bacon, and a bit of apples. It was topped with a crisp, buttery Panko breadcrumb and Parmesan crust. Now, knowing how much of a nerd I am for seasonal produce and unusual finds at the Greenmarket, this one kind of had me at orange cauliflower and purple potatoes. (I wonder if Theo read Tip #2 here.) But it was Harry who brought the casserole to our attention, naming it his early favorite. And really, it did taste amazing. Can I say, great Thanksgiving side? The recipe follows below! 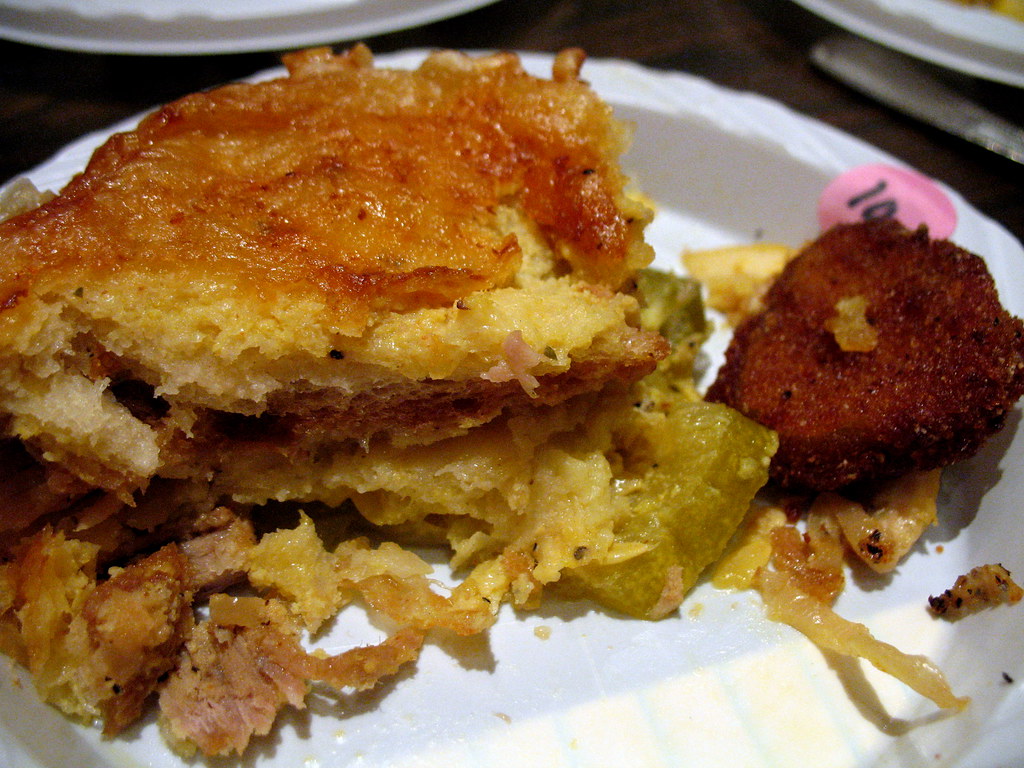 We were all smitten by this strangely satisfying egg and fried pickle casserole, too. I completely realize how weird that must sound, and I’m not from the South so I hadn’t even tried a battered, deep-fried pickle slice myself until this night. But Natalie Bell and Ethan Murphy’s casserole was intricately textured, with an airy, scrambled egg base and a beautifully flaky dough nestled somehow in there near the top. Studded in between were slices of pickles, and served on the side were more of those, too, but deep-fried. Oh, and there were lots of tender shreds of pork baked into the equation, too. It was one of the most surprisingly delicious things I’ve eaten. We gave it second-place. 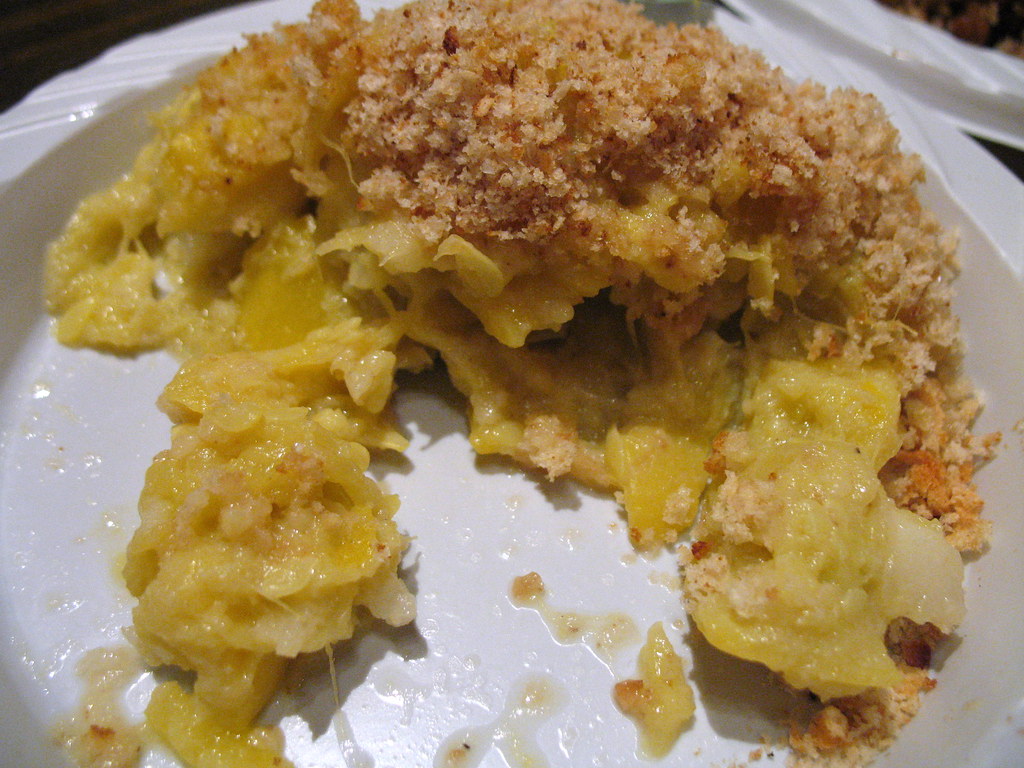 In third place, I’d like to think the real risk-taker took the cake. Made by the team of Ashley Bell and Shamina Singh, this casserole was risky in that in that it was so unbelievably simple that it merely consisted of delicately seasoned, cooked summer squash, and a breadcrumb topping. I admit I wasn’t immediately taken by this one, like Harry and Zach, but after further tries, it began to grow on me. The light use of warm spices, the unusual but not unpleasant mushiness of the squash, countered by the crisp breadcrumbs: it was refreshing, in more ways than one. 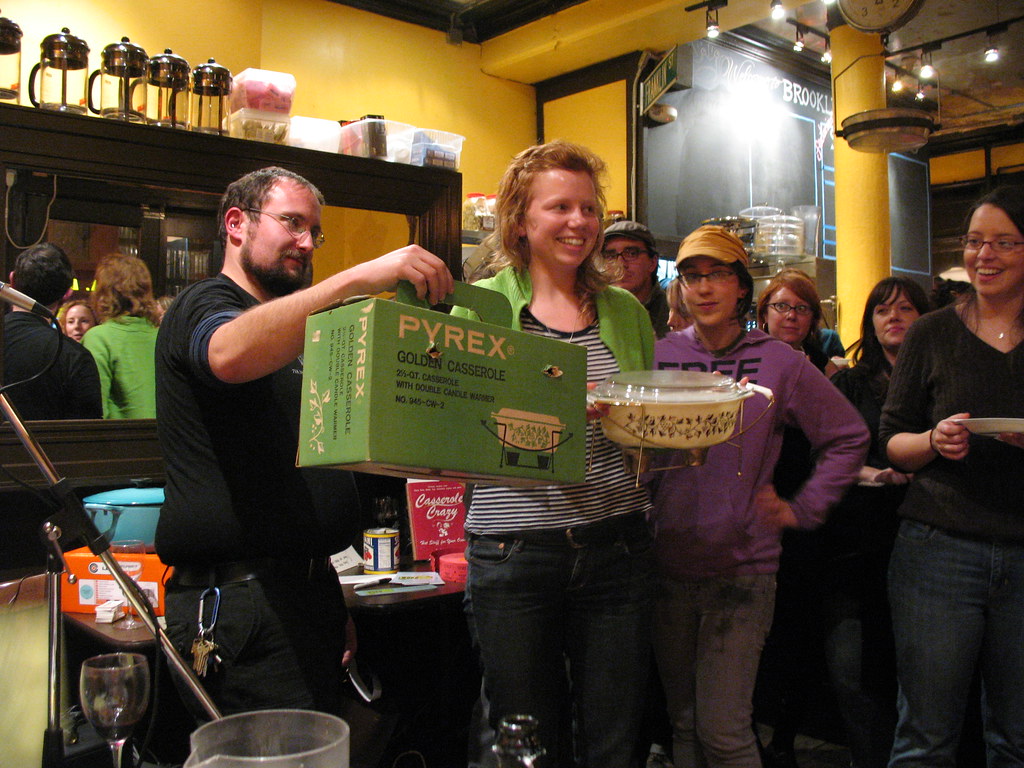 the winners received cookware prizes donated by The Brooklyn Kitchen