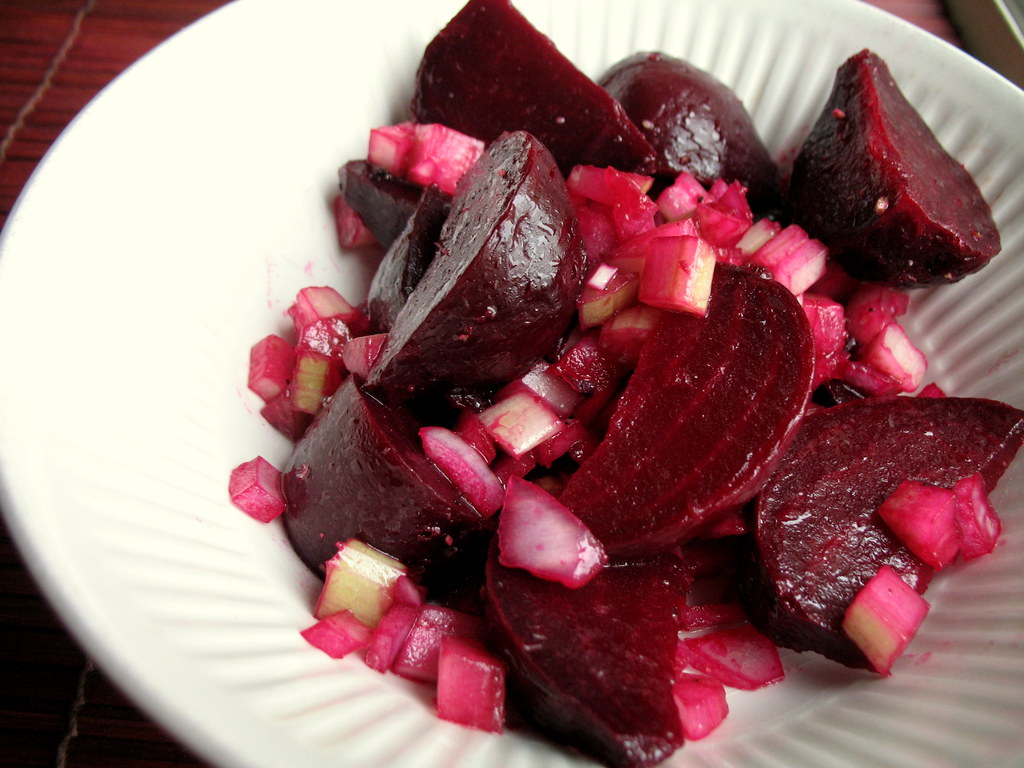 I’ve been bringing roasted beets to work for snacks a lot lately. A lot of people have peered over my shoulder and said, “Oh, beets — how do you cook them like that?” My first reaction, that of a not-so-helpful home cook-ophile, is usually to say, “How do you not cook them like that?” I don’t mean to sound snobbish here. Obviously, I’m writing this post in response to all these requests. But as long as you’re not simmering them into borscht, or slicing or shredding them finely to serve raw, then the only way I know to bring beets to a palatable form is to roast them. It’s simple, really.

Believe me, up until a few short years ago, I barely knew what beets were. My parents never liked them, so never bought nor cooked them. I’d only encountered the root vegetables as sliced and canned discs at a salad bar for a long time. I didn’t like what I saw there, either. Over time, I got to try fresher cooked beets, and made the not-so-mundane discovery that they were in fact delicious. Their firm, juicy texture is really something to behold, if not their cloyingly purple-staining tendencies (there’s a passage in Tom Robbins’ Jitterbug Perfume that indoctrinated me to beets, which begins, “The beet is the most intense of vegetables.”). Rapidly, the brash beet grew on me. 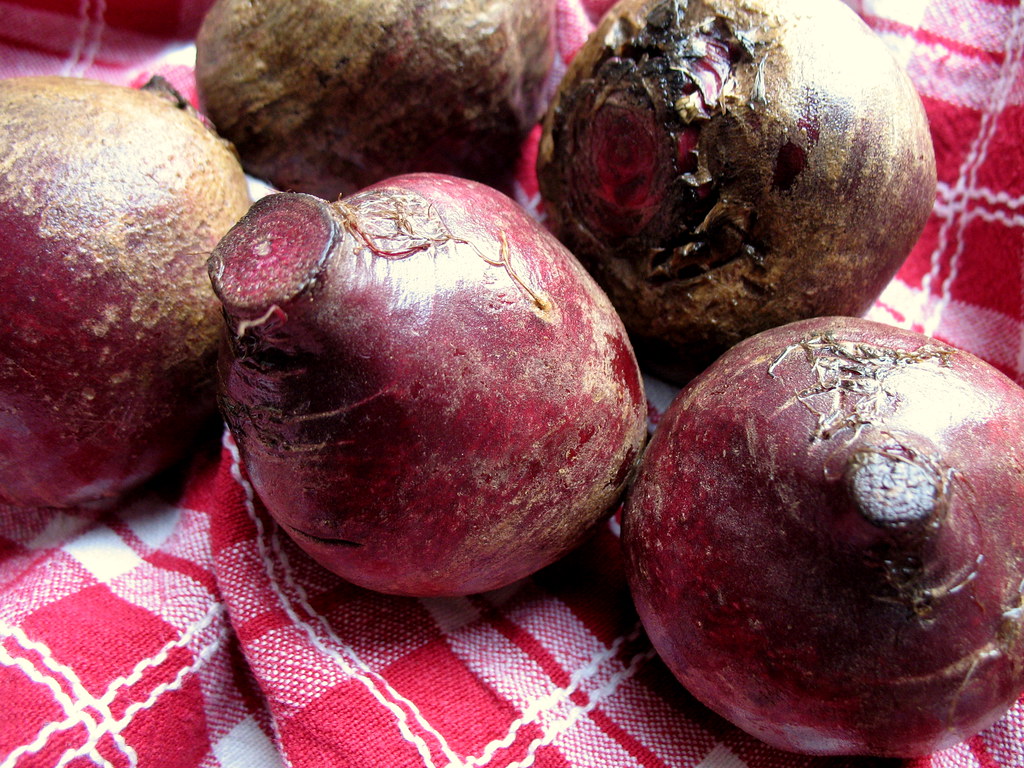 I’m sure I’m not the only one of my generation of new beet-likers who’ve had to figure out how to roast them on my own. But for the rest of those, who’ve only encountered beets already cooked in restaurants, or else in that far inferior canned form, here’s a quick run-through.

First, wash and trim the roots clean of dirt. Expect a gush of red when you snip off the long, spindly top of the beet. Don’t trim the knobby base yet, except for stray hair-like wisps. For goodness’ sake, if your beets came with the leafy tops attached, save those for another use. Beet greens are one of the mildest and most nutritious leafy green to sautee with garlic, or whatever else — like spinach only better. (I once had a cringe attack when I saw a guy at the Greenmarket rip off the greens from the bunch of beets he’d just purchased and toss them into a garbage can.) 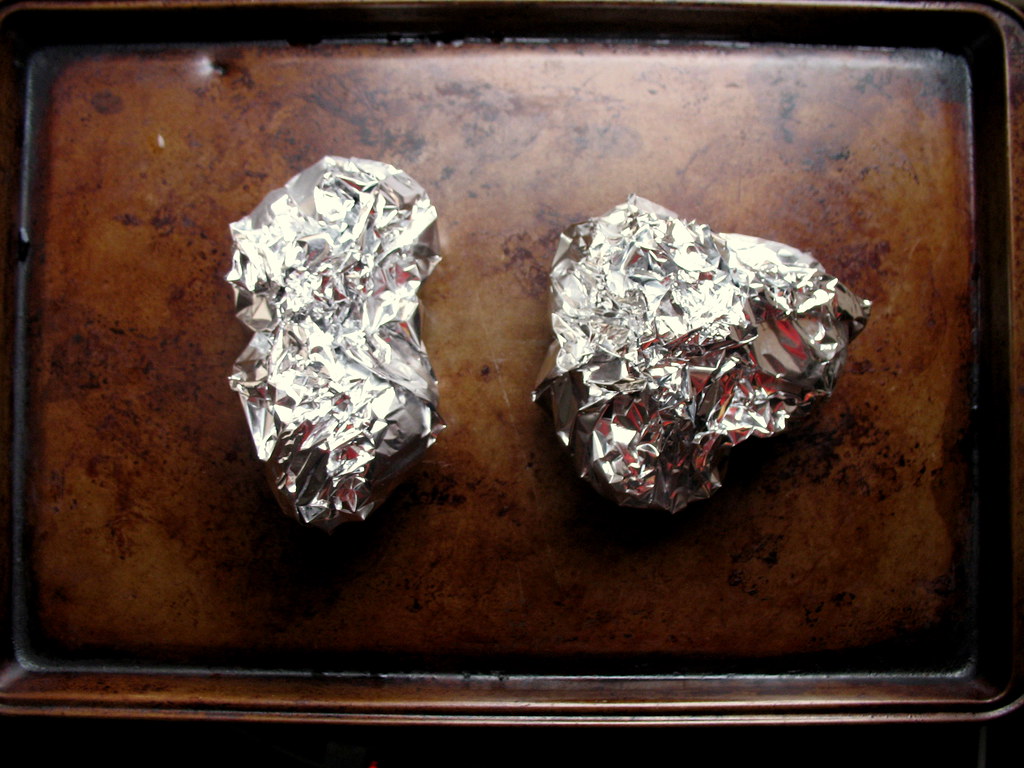 Preheat the oven to 425 degrees. Then organize your beets into groups of similar sizes, and wrap them up in twos or threes in tin foil. If there are three or four very little beets, I might bundle them all together. Large beets are best wrapped one or two at a time. When you crumple the foil completely sealed, it locks so that the beets’ juices will steam inside once they’re released. The flavor and sugars in the beets become concentrated, caramelized juices will run onto the inside of the foil wraps; the whole kitchen may begin to smell of burning sugar, or marshmallows.

Keep in mind there is no exact time stamp on how long to roast them, since beets are all differently sized. It just takes a little experience to know how to do things right; this is very beneficial in the case of roasting beets. Check after one hour of roasting at this temperature, removing the foil packages with tongs. When they’re just cool enough to touch, squeeze on each beet to see if the flesh gives a little. If it’s softened, but still somewhat firm, that’s the point I take them out of the oven to cool. How do you know when “somewhat firm” or “softened” is ultimately the right texture for you? By roasting beets yourself once or twice. 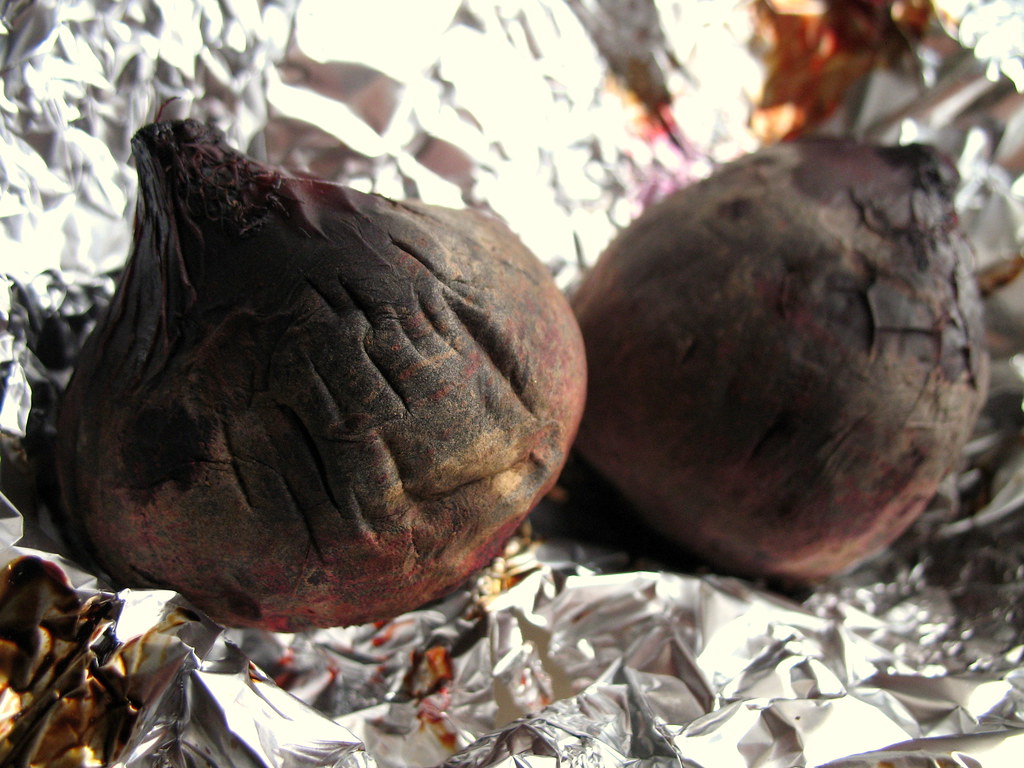 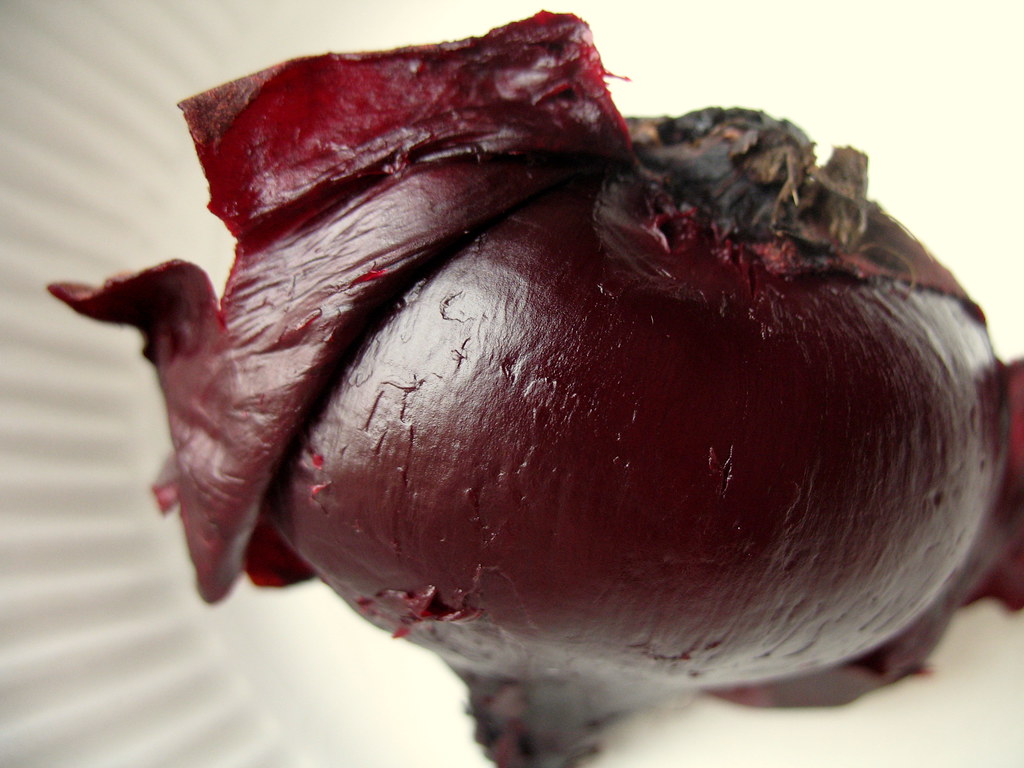 Now, unwrap your beets and let them cool off a good ten minutes. The beets’ flesh should have shrunken beneath the loose skins a bit. Trim off the base of each beet with a knife, then slip off the dull, black skin from the glistening orb. If it doesn’t peel away easily, it’s a good sign that your beet hasn’t been cooked enough. Throw it back in the oven for a bit longer, live, and learn.

This recipe is for a simple, chilled roasted beet salad with finely chopped celery and red onion that I made the other day. The other vegetables add a crisp bite and a squeeze of fresh lemon and drizzle of olive oil marries all the juices with a refreshing finish.

Combine all the ingredients in a bowl and toss. Cover and chill 30 minutes before serving.

Two brownie points: Even for a salad, it doesn’t get much simpler, and yet more beneficial than this. Beets are nutritional powerhouses, shown to lower blood pressure and help protect against heart disesase and colon cancer. Because it has so much folate (27% of your daily need per 100 grams), which supports tissue growth. studies have also shown it to protect against birth defects. The downturn is that beets do have a good amount of natural sugars, and are surprisingly high in sodium. Best to dress them lightly — or not at all.

Six maple leaves: The dressings and seasonings are the only non-local, non-seasonal ingredients in this salad, as well as a constant thorn in my side when it comes to this “green factor” rating. I’ve got this fruity, floral Greek olive oil now, which I fell in love with at my first dunk in bread at Fairway Market. But, it’s from Greece. And that lemon didn’t grow 100 miles or less from here, either. Celery is actually at the end of its harvest season, but I had a bunch from weeks ago to use up in my fridge.