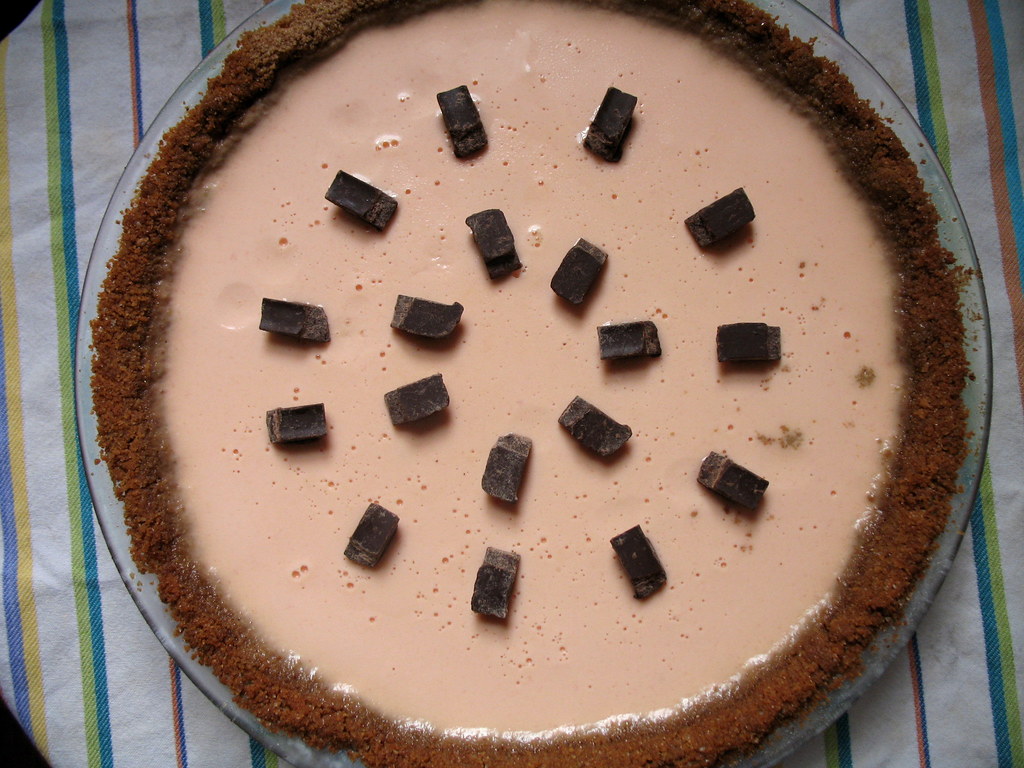 It’s really the last week of summer. The skies are really becoming darker sooner, and that chill breeze in the evening is really happening. But on the flipside, and in celebration of late-summer local fruits, this watermelon pie is also real. I didn’t think it would make it past the dream stage for a while.


Oh, the toil and scientific puzzles of pastry-making! My brain hurts from it still. See, I had this idea of making a “watermelon pie” that was as light, cool and refreshing as its namesake fruit. The prototype I wanted to follow was key lime pie, with an open face and graham cracker crust. So I went ahead and made a test batch of this recipe, swapping in watermelon juice (and a squeeze of lemon, for tartness) for the lime. The next day, after baking and chilling it, it had only firmed up just around the rings of the ramekins I’d poured the custard into. Taste-wise it was pretty great. But there was no way I could bring mostly cold watermelon, egg yolk and sweetened condensed milk soup to a pie contest. Oh, did I mention that the impetus for this dream was the Governor’s Island Jazz Age Lawn Party‘s pie contest? The one where I won “Most Original” at the last time it was held? Yes, I had a title to defend! I am still not sure why the watermelon version of my key lime pie never firmed up; something to do with the difference in chemicals of the fruit juices, I suppose. I have never been much of a molecular gastronomist. But that all changed Thursday when I attended a six-hour class in food science led by Ideas in Food. (Much more on that to come!) The particular class was based around hydrocolloids and methocellulose, and with these gelling agents we learned how to bind fruit together with pectin, among other maneuvers. I grilled our instructor about my particular watermelon pie dilemma, and we came up with a lot of possible avenues. We considered agar, but it might create too firm a gel. The dairy and proteins in the egg yolks in my recipe complicated the situations with other add-ins. In the end, after much deliberation, we decided that sometimes the most predictable answer is often the best: unflavored gelatin.

I still couldn’t fathom cooking the egg yolks to the boiling temperature needed when using gelatin, though. I also wanted my watermelon custard to be smooth and silky, not clumpy like my test-batch custards kind of were. Over the next day or two, as I did some more research, it suddenly hit me: panna cotta. I wanted to make essentially a watermelon panna cotta, in a pie crust. Things were looking brighter now. 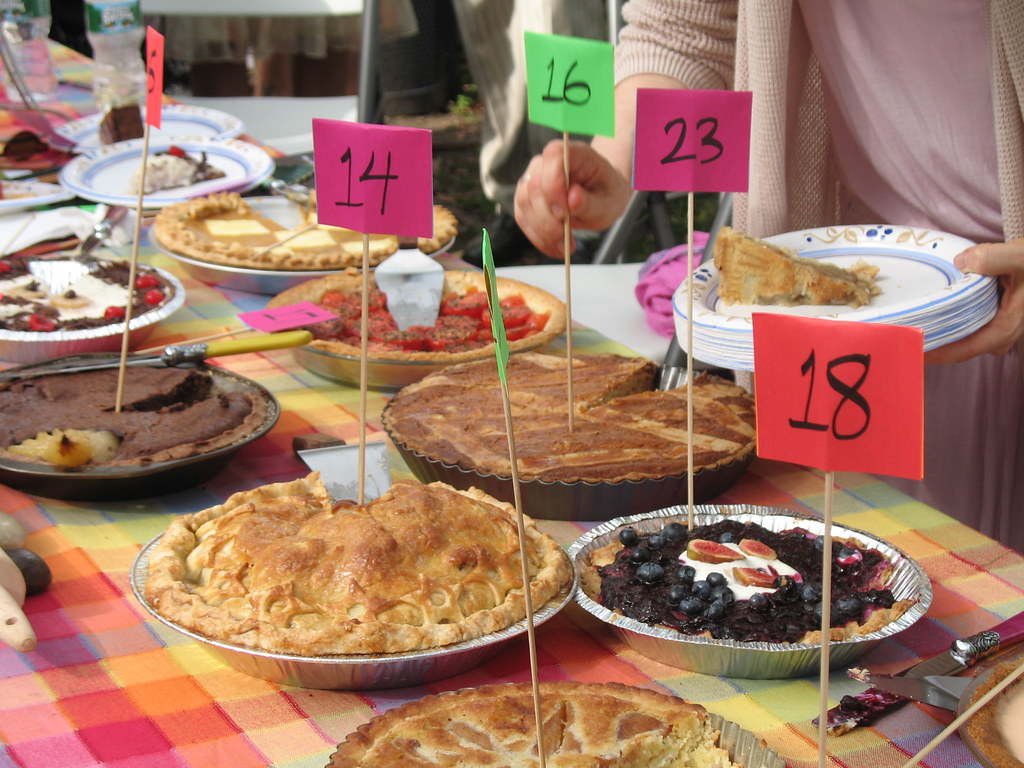 and the pie contest table

The scratching out of egg yolks from my original version not only allowed me to cook the dairy to scalding-hot, but made the color of the pie a more purer pink, rather than peachy. The trick here was also using the reddest, sweetest, most flavorful chunk of watermelon to blend up for the half-cup of juice. Another rule of thumb was pre-baking the graham cracker crust a good fifteen minutes or so. The pie filling mixture was so liquid when poured into the crust that I was afraid it was going to make it soggy. But somehow, miraculously, it wasn’t the next day. And even more momentous, the filling had actually gelled quite stiff.

My fellow pie baking contestant Karol also had a dream pie. Her apple pie had won the “Mom’s Best” award at the last pie contest, and this time she wanted to make a pie with a checkerboard arrangement of luscious pumpkin and cheese fillings. I don’t have a very clear idea of how she ultimately did it, but she did, after two tests. (I may finagle the recipe out of her in a post to come!) 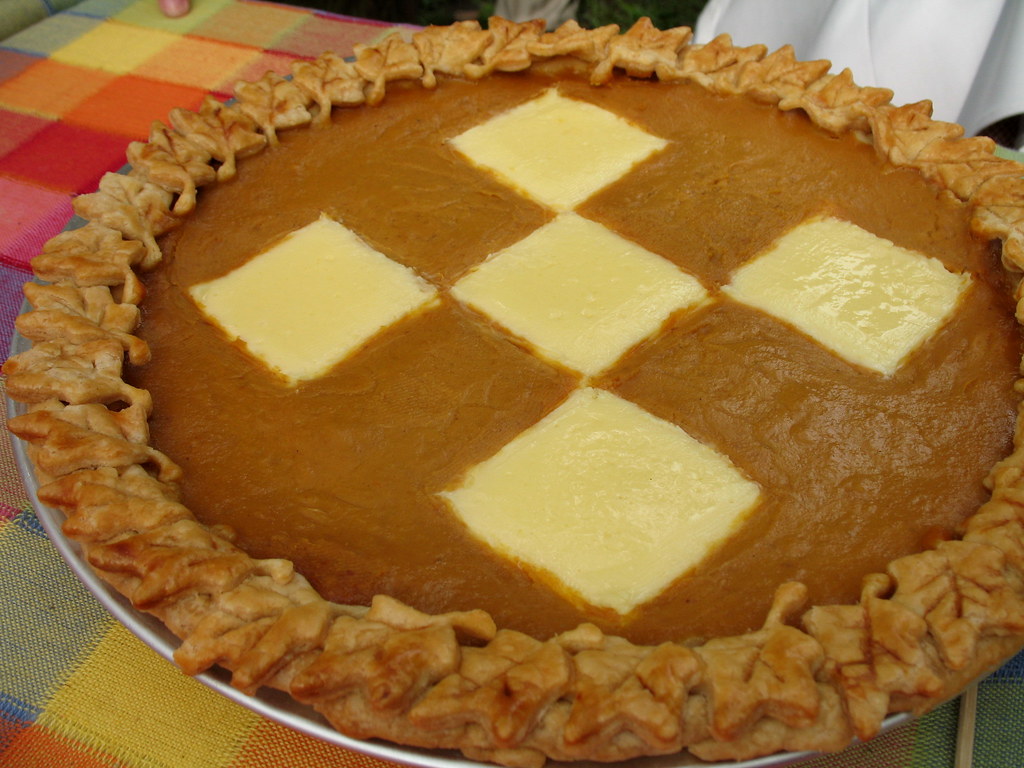 the little pumpkin-cheese checkerboard pie that could

So off to Governor’s Islands we went on Saturday, with our pies and picnic baskets in tow. There were slightly more pies in competition this time, around sixteen or so. Many of them looked astounding, too. We watched as the panel of five judges (four adults and one child, as it were) dug into a slice of each amidst a bustling, hungry-eyed and impeccably dressed crowd of lawn party-ers. The pie contest had become a major spectacle of the event. Nearly everyone on the island was crowded around the pie table, anxious to get their hands on a slice of their request. So, too, was I — after all, I hadn’t gotten to cut into my own pie. 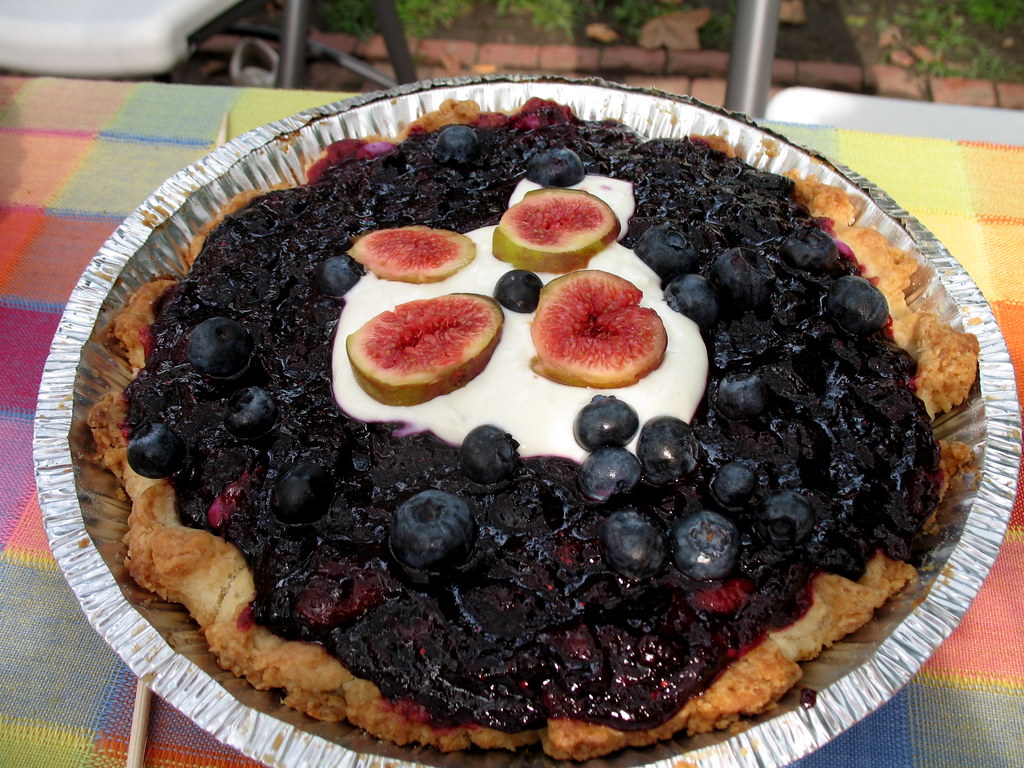 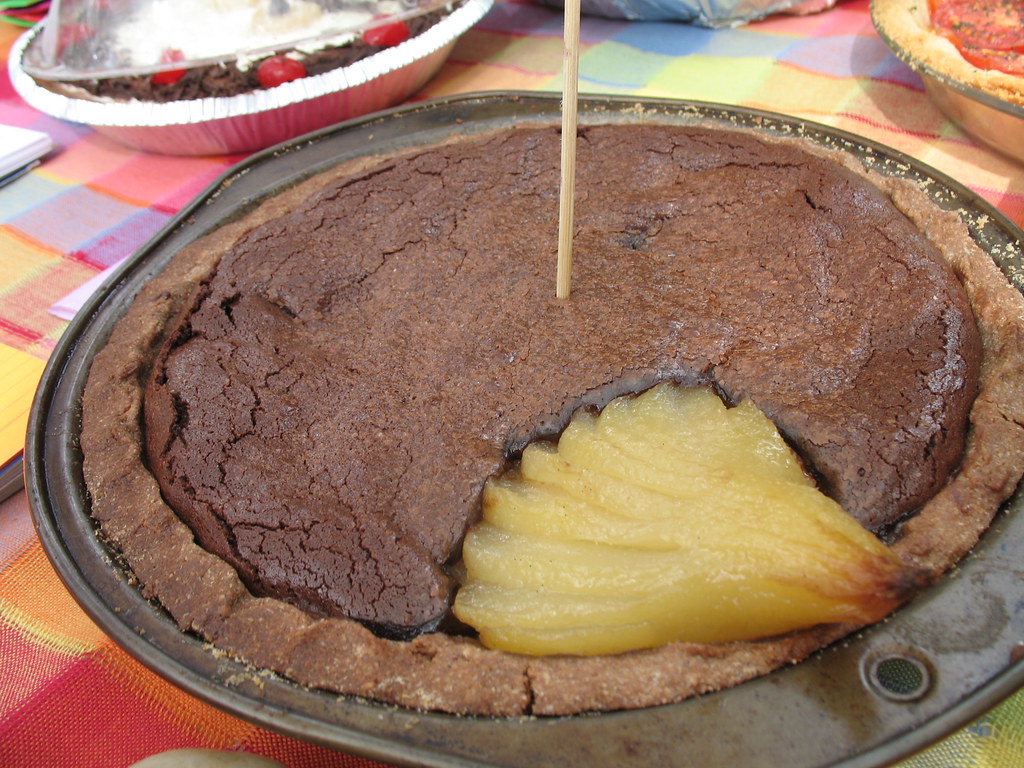 wish I’d gotten a slice of this chocolate-pear pie 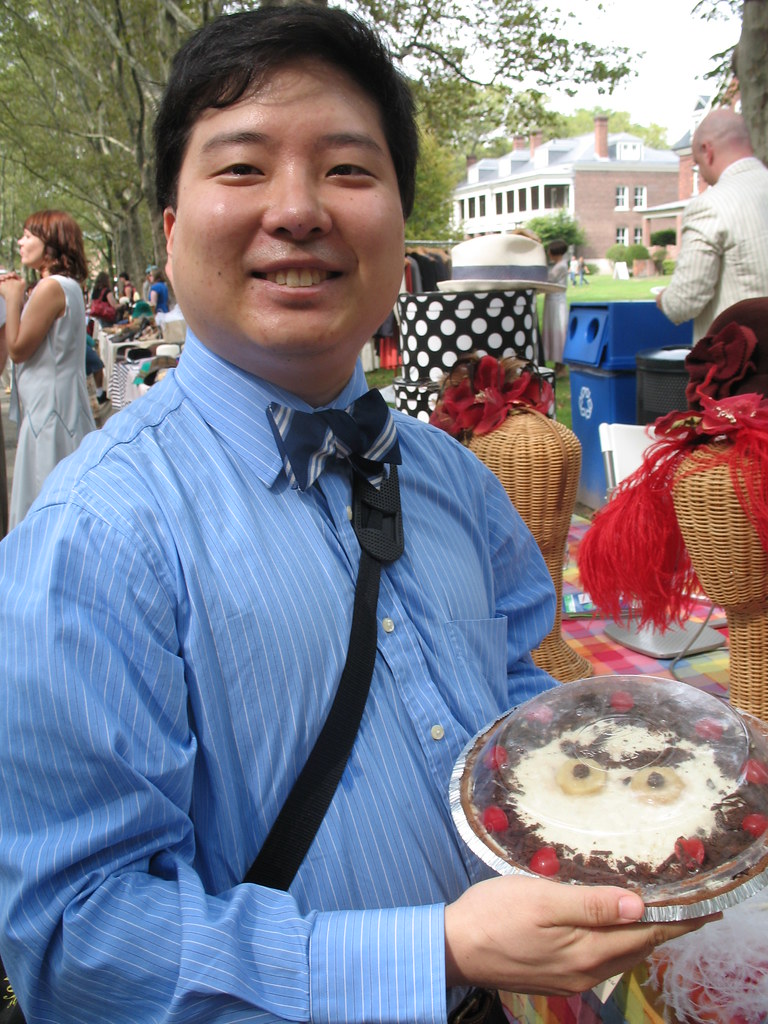 When the judges had finished their tasting, the pies were sliced up for first-come, first-serve sampling by the crowd. Luckily I was poised in the right place at the right time, and picked up a slice each of Karol’s and my pies. If I dare say so myself, these were both polished off pretty quickly. Karol’s pumpkin-cheese checkerboard pie filling was velvety-smooth and every bit as rich and satisfying as a pumpkin pie or cheesecake should be. Only it was combined; and the forces were now indestructibly scrumptious. My watermelon pie was, to my relief, a consistent creamy gelatin texture throughout, and it wasn’t too firm, either. It was just the way I had wanted it to be. I had gone back and forth about decorating the top of the pie with dark chocolate chips, as if watermelon seeds. I finally decided to just go for it — I was aiming for “Most Original” anyway — and I was glad that I did. I think they added a little something special. 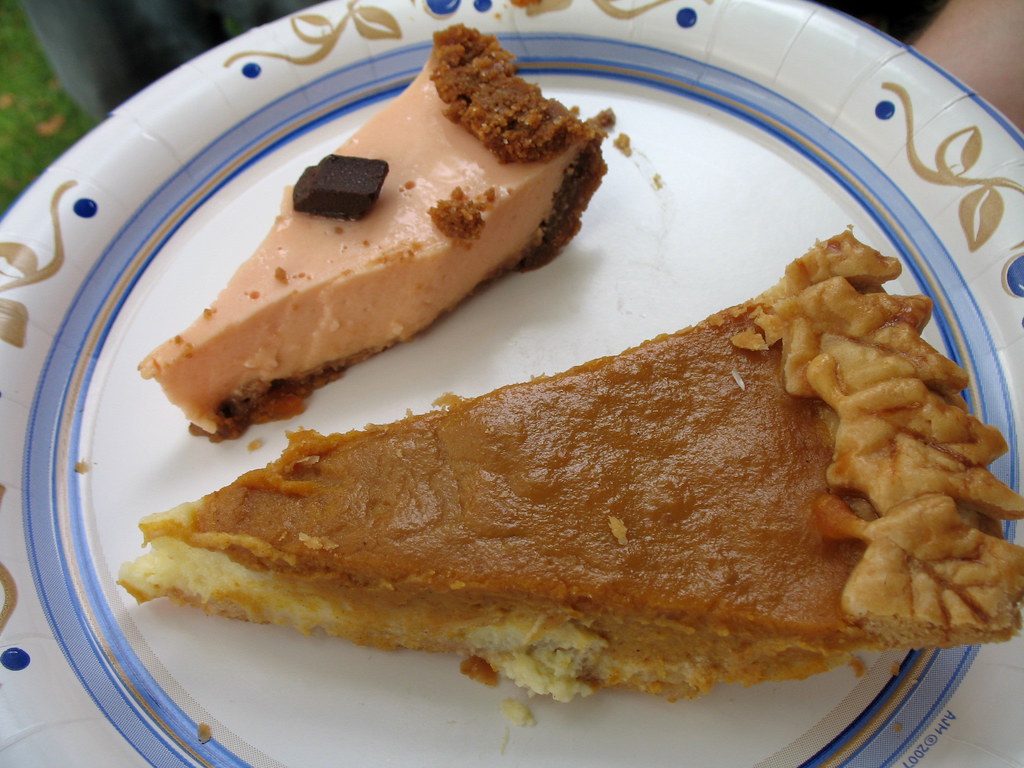 our pies, side by side 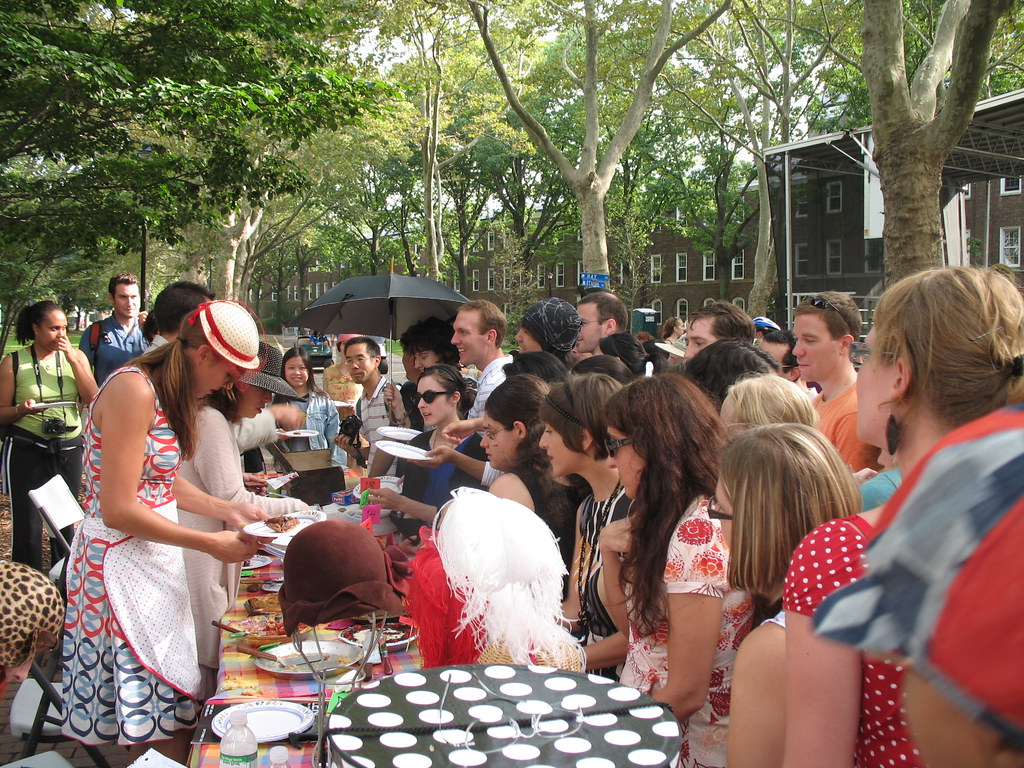 everyone wanted a taste of the action

After the tasting session, and some laying around on the grass, the judges stepped onto the stage. They announced the winner of the “Hobo’s Choice” award first; the idea behind this clever title was that the winning pie looked so appealing that a hobo would steal it if it were sitting on a windowsill to cool. I wasn’t surprised when the award went to a blueberry, cream cheese and fig pie, with fresh fig slices arranged in a fan on top. Next, the judges announced “Mom’s Best.” There were a lot of pies that looked like they were the best efforts by Mom on the table, including a creatively adorned apple pie — just the kind Karol had won with last time. But the champion was not to be upset. The award went to the pumpkin-cheese checkerboard “dream” pie! Just as soon as Karol had returned from the stage, they announced the “Most Original” award… and it was my turn to step up. I guess the judges were as pleased with the way my pie turned out as I was. And finally, they announced a new category. Since there were a handful of savory pies on the table this time (unlike last time, when my asparagus pie was the only one), they handed out an award to the tomato tart for best savory pie. For some reason (which I forgot to ask about), we all won a copy of a jazz history book called Delta Blues. A little inspiration for the next Jazz Age-themed pie contest baking session, I suppose. 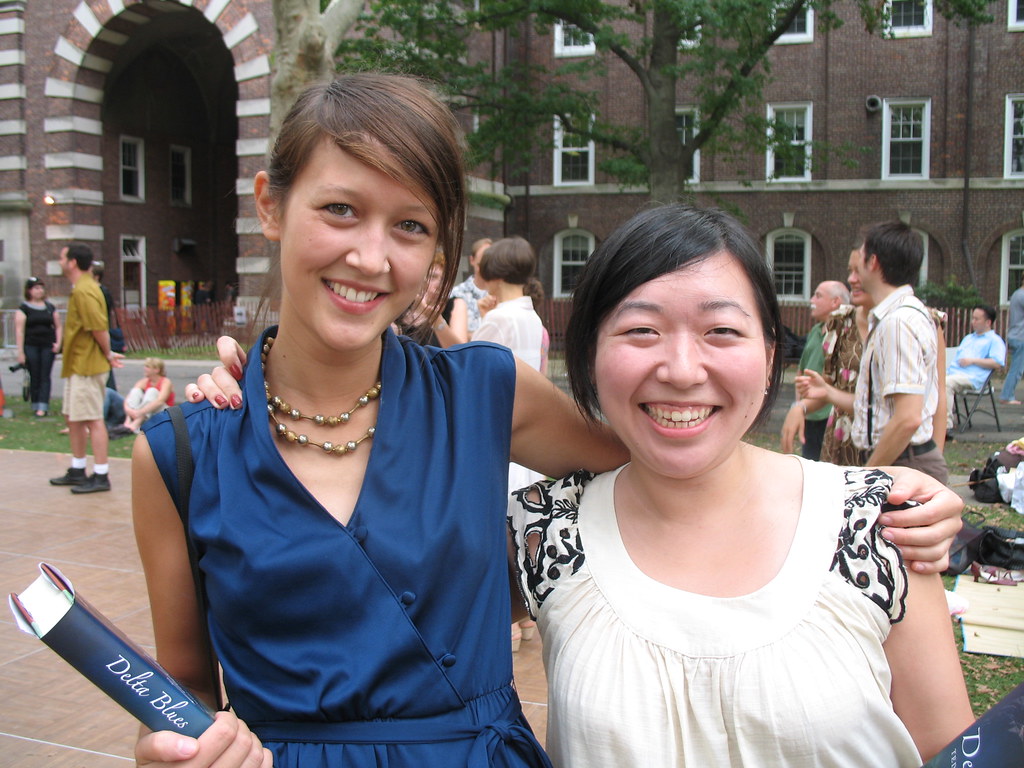 Both Karol and I had dreams of never-before-seen-or-done pies (as far as we knew), and even if we hadn’t won the contest we’d have been pretty happy about making them become a reality. But hey, winning a contest never hurts, either. Especially when it’s the same contest and same titles as we won back in June. Deja-whoo!

Preheat oven to 400 degrees. Mix the ingredients for the crust in a medium bowl until thoroughly combined. Spread into a well-greased 9″ pie pan and press against the sides into an even crust. Bake for 15 minutes, or until edges are slightly browned. Remove and let cool at least 30 minutes before filling.

In a large bowl, stir together the watermelon juice, lemon juice and the gelatin and set aside for five minutes. In a saucepan, heat the milk, cream and sugar. Stir to dissolve all the sugar and bring just to a boil. Pour the cream mixture into the watermelon juice mixture and gently stir (so as not to form bubbles) until thoroughly incorporated. Let cool for 30 minutes. Pour filling into the cooled pie crust. Cover the pie with plastic wrap and walking very slowly, very carefully, place in the refrigerator to chill several hours or overnight. When the pie is set, arrange the chocolate chips on top.

Eight brownie points: Don’t be swayed by the light, fresh refreshing nature of this pie. Not that any pie is expected to be a health food, but this one’s dense cream filling and buttery crust are flags for cholesterol. But if you like watermelon and don’t mind altering it into a heavy pastry, a little dessert in moderation doesn’t hurt — isn’t that what fruit pies are all about?

Four maple leaves: I’m still working on a hunk of store-bought watermelon in my fridge from the sorbet last week. I also used generic cream and milk, though the butter for the crust was from a local farm, and highly recommended.