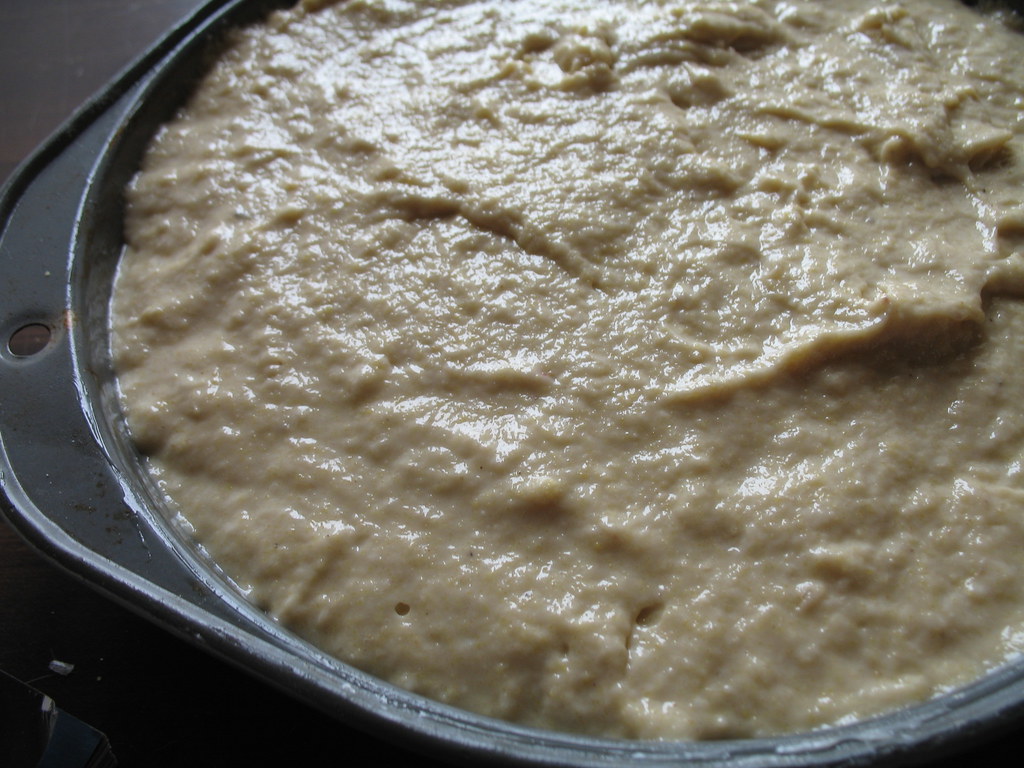 This recipe is like a southern housewife who just flew back from the Bahamas. There’s nothing that smells of home, sweet home like a fresh-baked pan of cornbread, but who wants to forget the intoxicating aromas of the tropics so soon? Heck, a compromise. And to return to reality from that little hyperbole, this dish was indeed a compromise when it was planned for the menu at the BBQ last night, hosted by Finger on the Pulse.

Knowing there had to be a dessert in the mix, myself and the event’s two other esteemed guest chefs, Mike and Mark, had enlisted peaches from the get-go. But details were ambiguous, and changed rapidly. Remembering we were cooking up 300 servings, what was easiest — cake or cobbler? Peaches on top or embedded within? Then there were was the rest of the menu to plan — should bread be served with all that pulled pork, shredded duck and sliced brisket? At one point we settled for serving a wedge of cornbread on the side. After all, it was a southern-style barbecue, and there were barbecue sauces representing each of the Carolinas to sop up. But cornbread would mean more baking, and we were still talking 300 servings each (and three measly chefs with home kitchens). So two nights before the event, the magical idea of this dish was spawned: a cornbread and dessert in one!

The ensuing dessert was, in my estimation, far from the star of the dinner. Over the course of the last two days the three of us cooked four main courses and four sides, some being among the best food I’ve ever tasted. Here are a few of the highlights (and for awesome photos of the party, not just the food, check out the gallery by Nick Rhodes at NickyDigital.com): 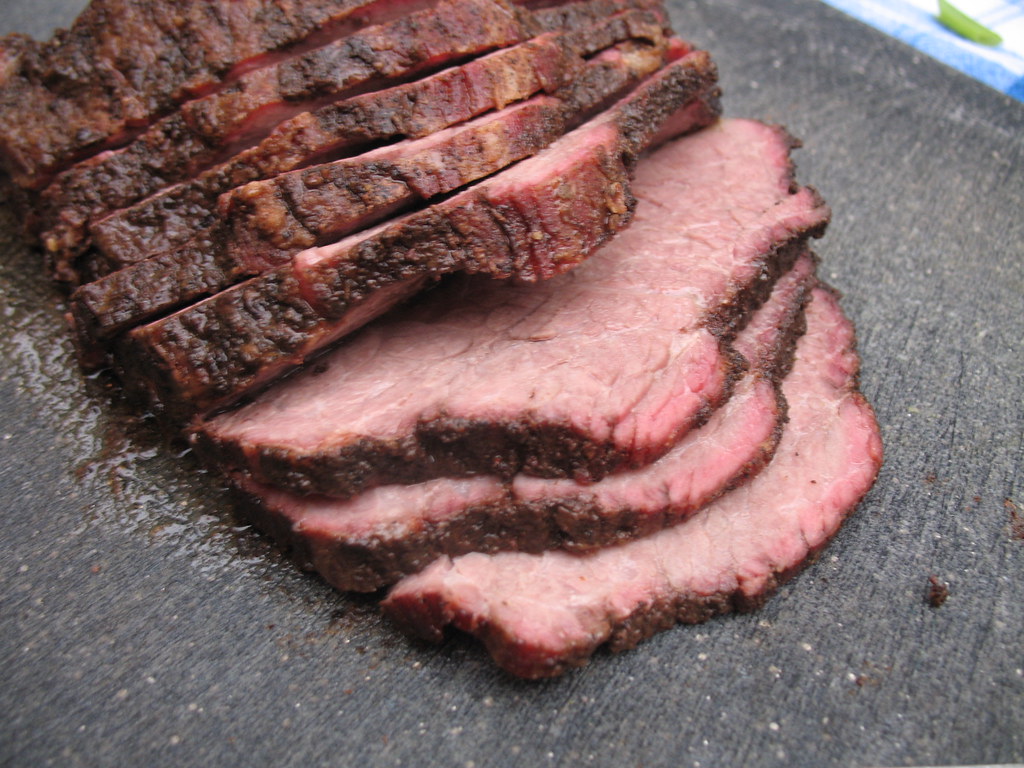 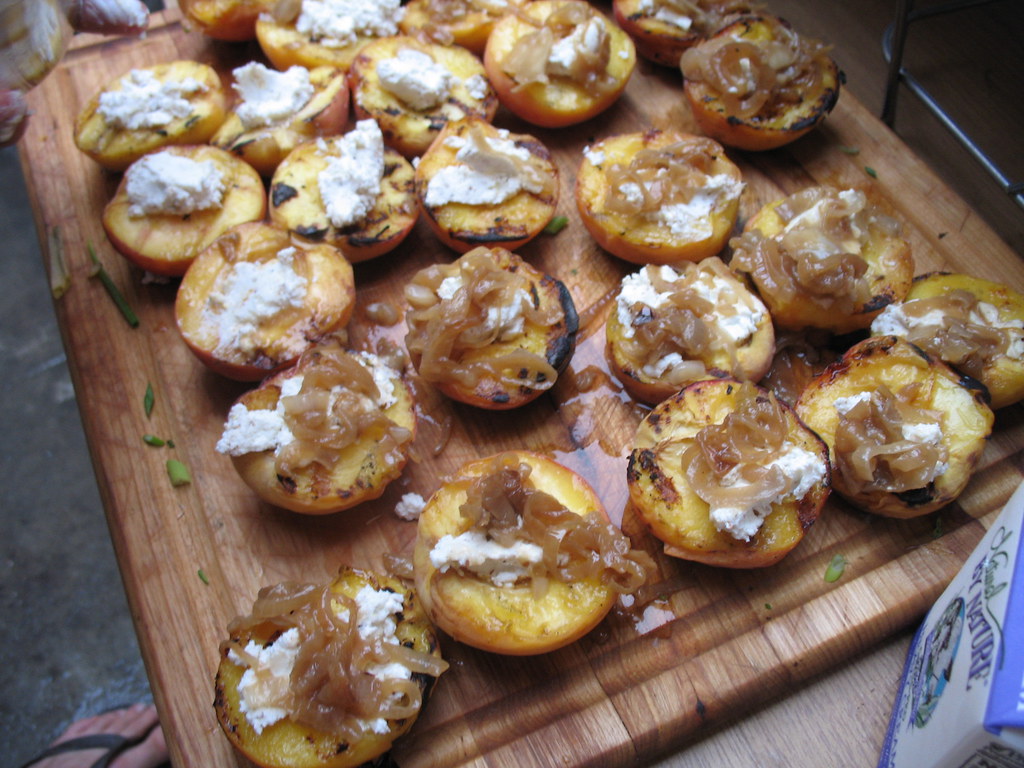 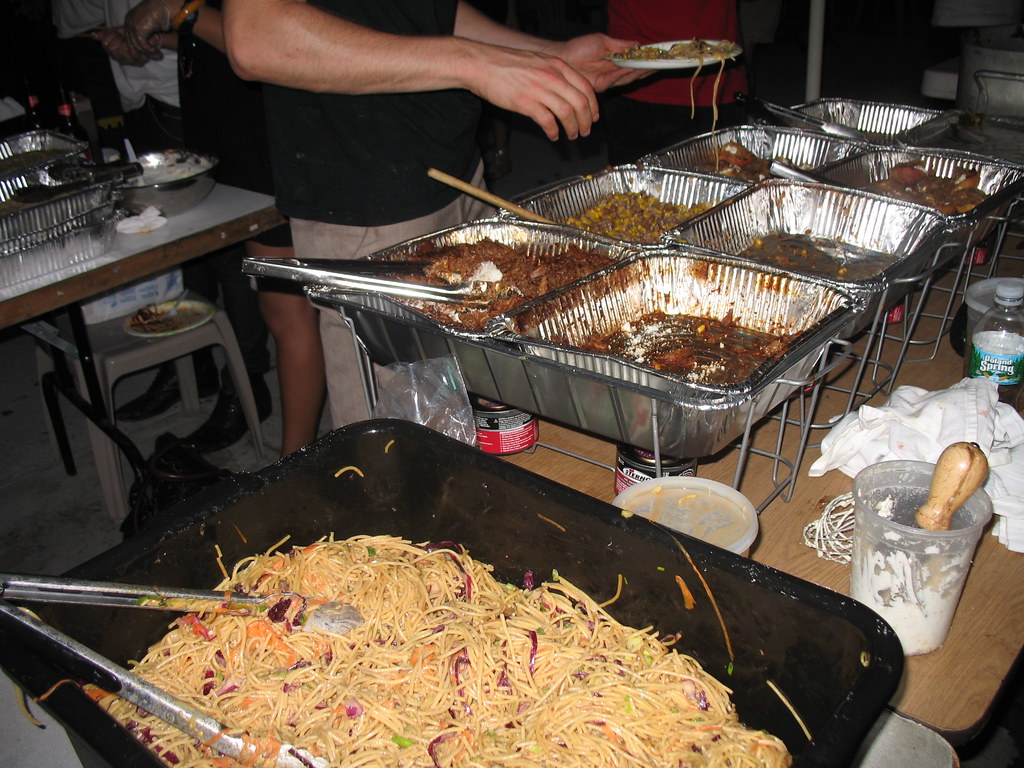 that’s a tub of cold sesame noodles, in front of a savory black eyed-pea succotash that went fast 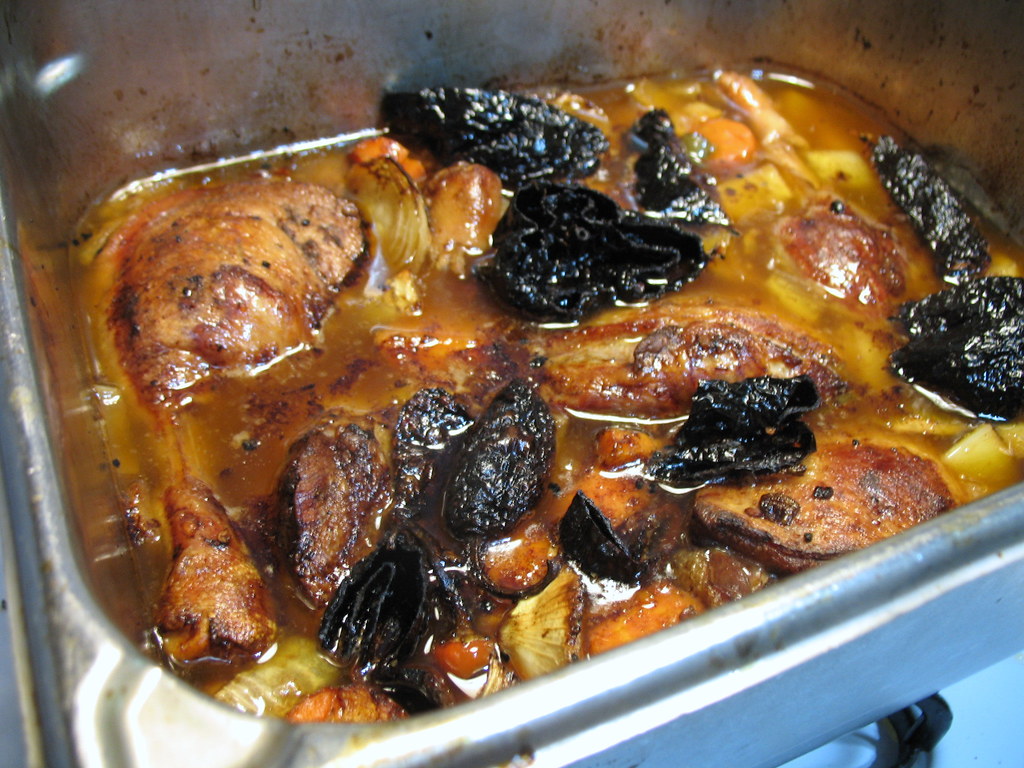 braising the mole duck legs, which was served shredded and topped with cojita 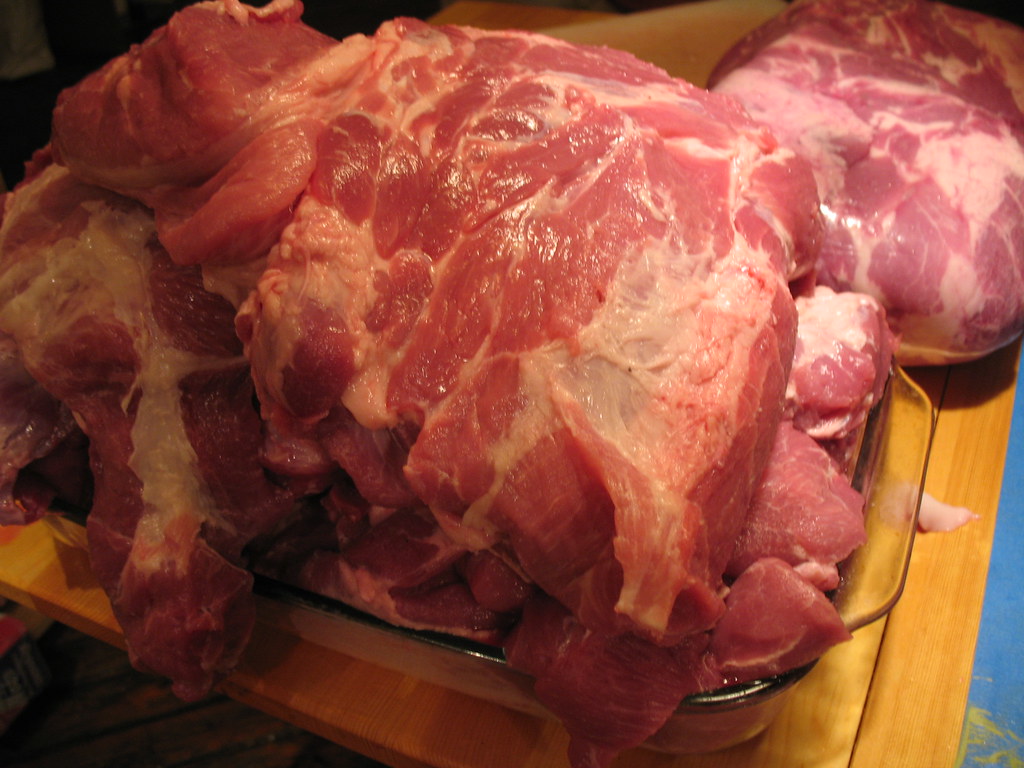 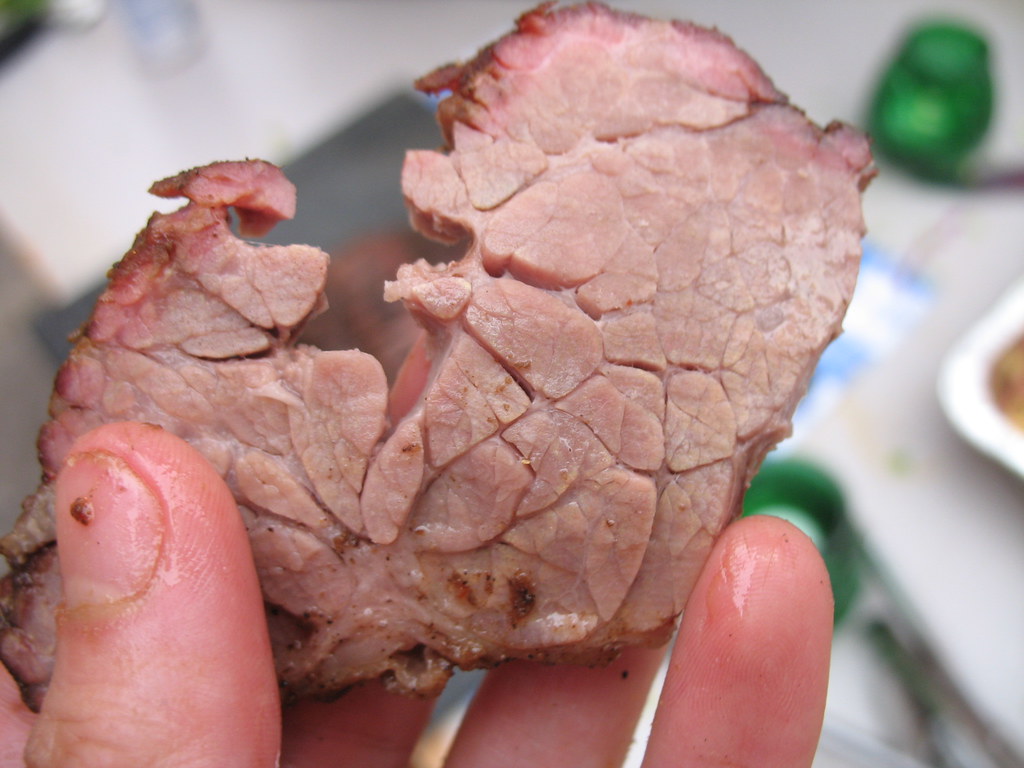 In the next few months, I’ll be trying to recreate some of the dishes I can’t take credit for the creation of at home, and post recipes for them then. This will most likely happen sooner than later. For the time being, though, back to this cornbread. 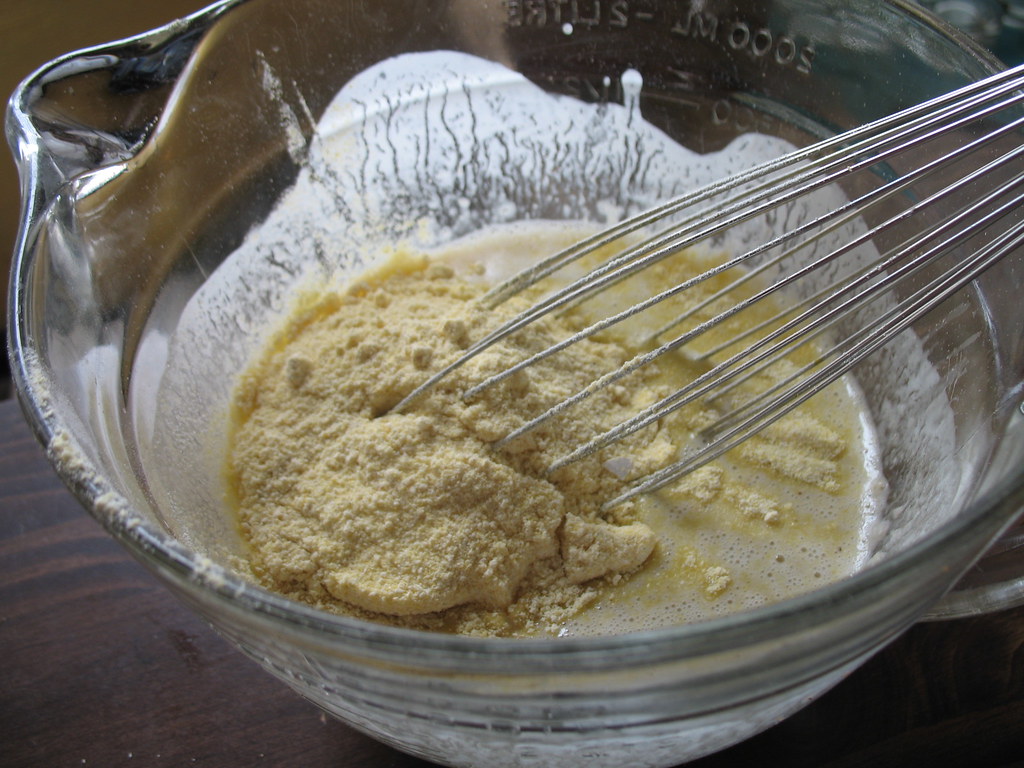 There aren’t too many foods that define American cooking like cornbread. And for all its long history, it’s varied little. I enjoyed the Homesick Texan’s ode to true, cast iron pan-baked cornbread that crisps at the bottom, and wish that the scope of our cooking preventing us from doing similarly. I wish we’d had the means to brown individual slices in butter on a griddle for a minute, too. Something had to be done with the humdrum recipe, to keep it exciting as well as stay in tune with the not-so-simple offerings throughout the rest of the menu. So we bolstered the batter with fresh mashed banana and swapped out the buttermilk for coconut milk. 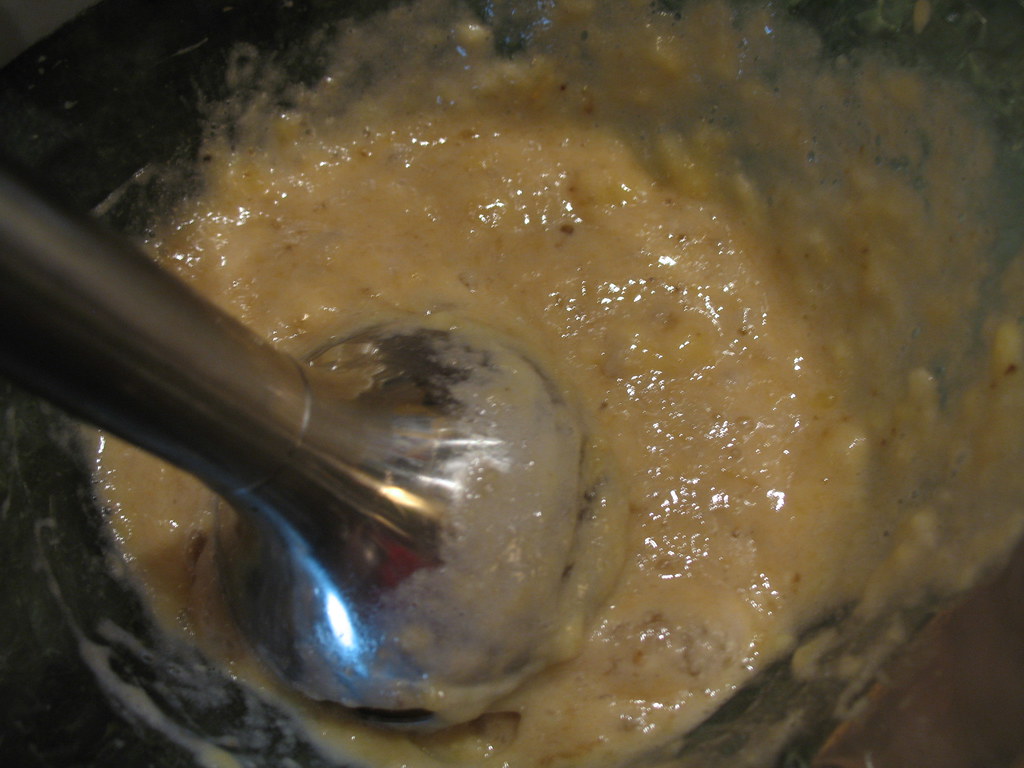 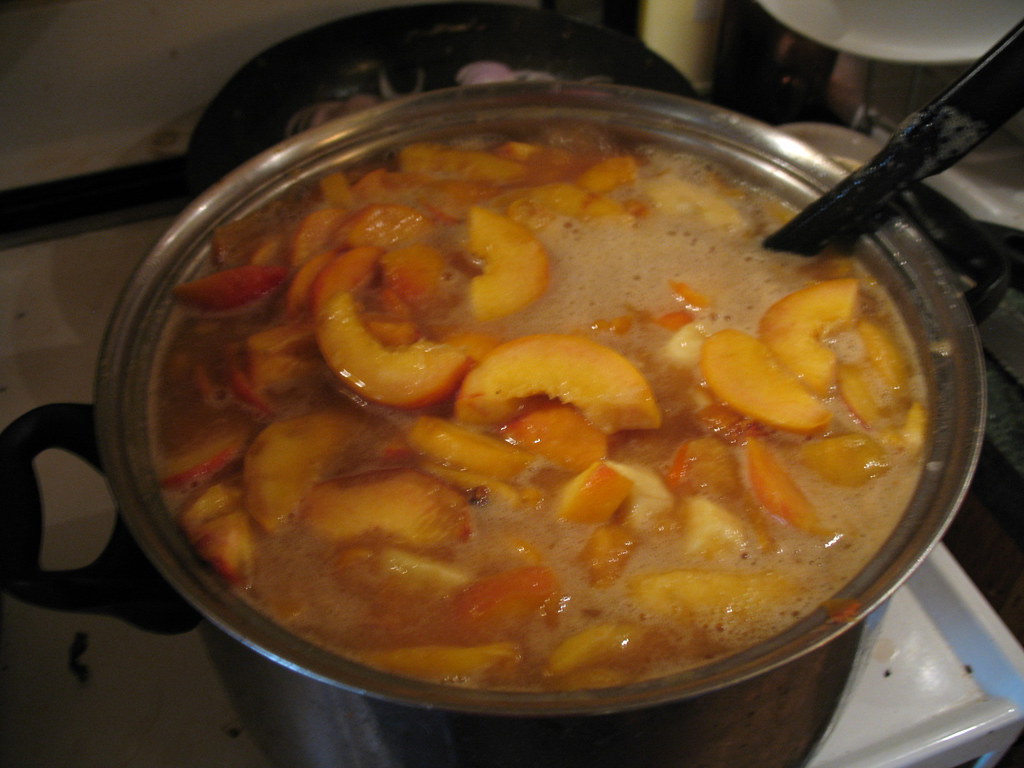 peaches boil to a juicy sauce

Next, the peaches. An army-sized box of peaches went into a pot for a chunky, fresh-tasting peach compote. Like a pie filling, all it needed was a touch of sugar and fresh lemon juice, and it boiled for half an hour with some water until warm and gooey.

This topped each piece of cornbread, along with a dollop of whipped cream. It topped off my night, too, and a day’s worth of ferocious cooking. 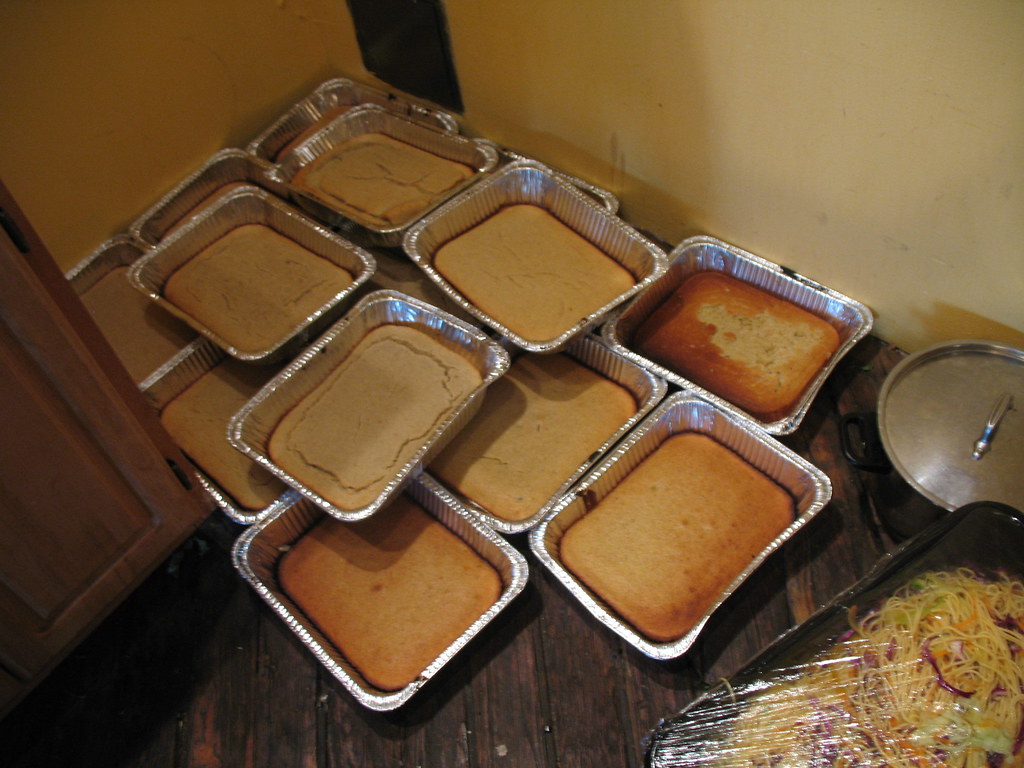 a corner full of cornbread awaits transportation to the site

for the peach compote:
6 peaches, peeled, pitted and sliced in wedges
1/2 cup sugar
juice of 1 lemon
about 2 cups water

Preheat oven to 350 degrees. Mash the banana well in a mixing bowl using a hand blender (or transfer from a food processor). Add the egg and sugar and whisk. Add the coconut milk and oil and whisk to blend thoroughly. Combine the dry ingredients in a separate bowl and add gradually to the wet ingredients until fully incorporated, smoothing any lumps. Pour into a well-greased pan and bake for approximately 20 minutes until top is lightly golden and a tooth pick inserted into the center comes out clean.

Meanwhile, make the compote. Combine all ingredients in a large pot and boil over medium-high for 30 minutes, stirring occasionally. Cook longer if still very runny, or add a little more water if it begins to dry out. Let cool 5-10 minutes before serving. Top each cornbread slice with a ladle of the compote and a dollop of whipped cream.

Seven brownie points. Cornbread alone wouldn’t fare so well in the health department, especially not when cooked the traditional bacon dripping-greased fashion. This one’s got a whole cup of coconut milk, which isn’t the best replacement. It’s high in saturated fat, but there’s been talk about its natural benefits too, including the fact that it contains lauric acid, purported to stimulate brain development. This cornbread recipe is sweet — sweeter than regular cornbread because it’s meant to be dessert, but the peach compote has just about enough sugar in the recipe to make them melt. Other than that, the topping’s just fresh Vitamin A and Vitamin C-rich fruit. Then there’s the heavy whipped cream, another fatty pitfall. Desserts are far from perfect, huh?


Two maple leaves: If it sounded funny at the beginning of this post when I referred to bananas as being somewhat exotic, I’ll admit this popular fruit is nothing new to the States. But it is exotic — in that it traveled several hundreds of miles to get to every corner grocery and produce stand of your neighborhood. (As a side note, this fascinating-sounding new book can tell you all about how that happened and more.) So did the coconut milk, which was imported from Thailand. The peaches, which are abundant locally at this time of year, is the dish’s only real saving grace, as the rest of the ingredients are more or less kitchen staples.