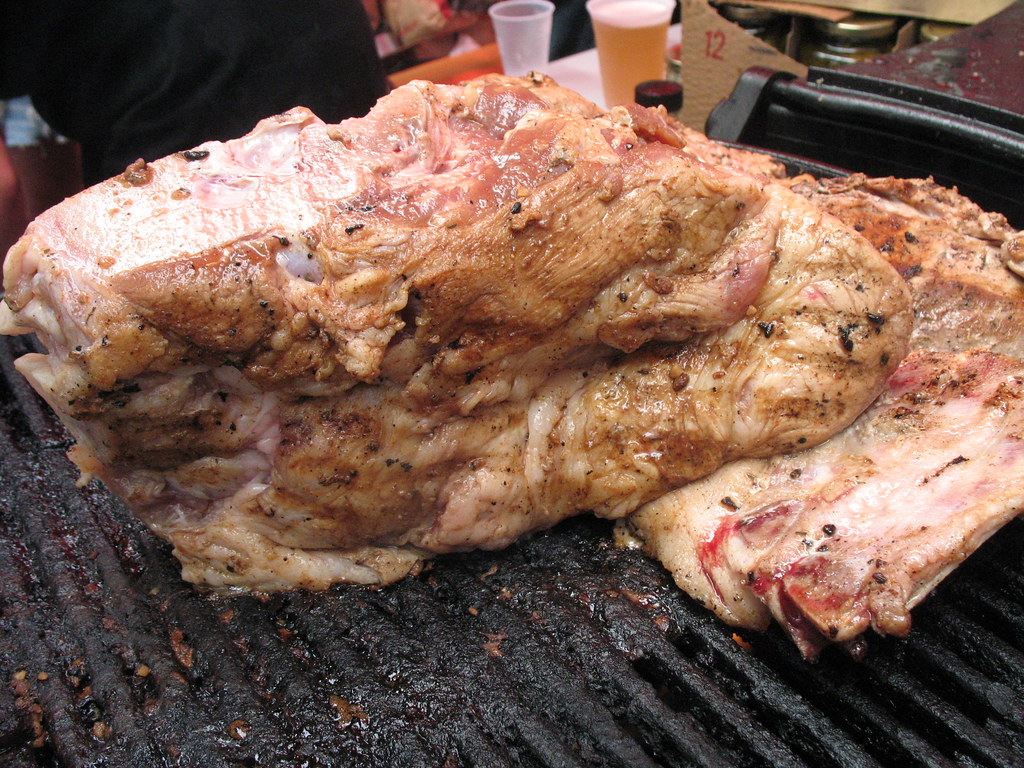 Those of you who missed the second annual Unfancy Food Show yesterday, I bemoan your losses. Begun as a locally-focused antithesis to the Fancy Food Show, this slovenly stepsister event took place in the backyard patio of Williamsburg’s East River Bar over six hours of scattered thunderstorm. And a good time was had by all.

The inaugural event was held last year, and this time I arrived after a late brunch party with a notion of sticking around to chat with some of the local vendors, meeting some friends, and pecking my way through delicious samples and scraps. What resulted was my abandoning all later plans for the day, and having myself a bonafide unfancy feast.

The first stop for sampling was cheese. My companion for the day Matt persuaded me to accept a soft, misshapen morsel of pure milkiness called Constant Bliss from the knife of the attendant at Jasper Hill Farm. I was speechless for about a minute. Mostly because my mouth was thoroughly coated. 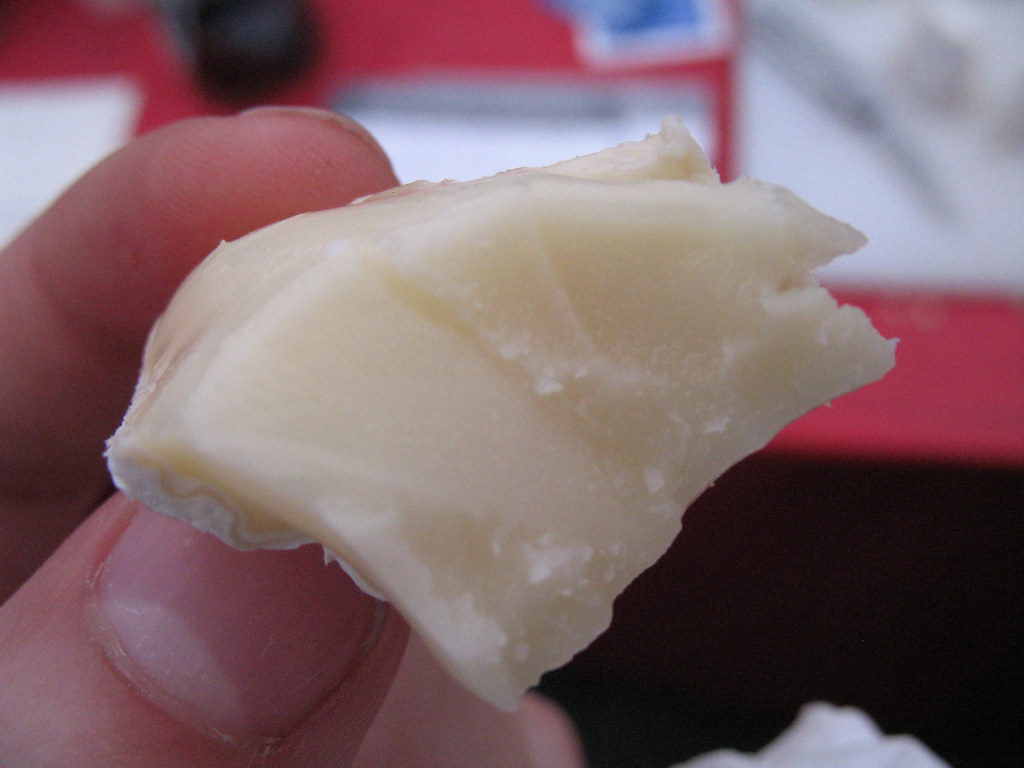 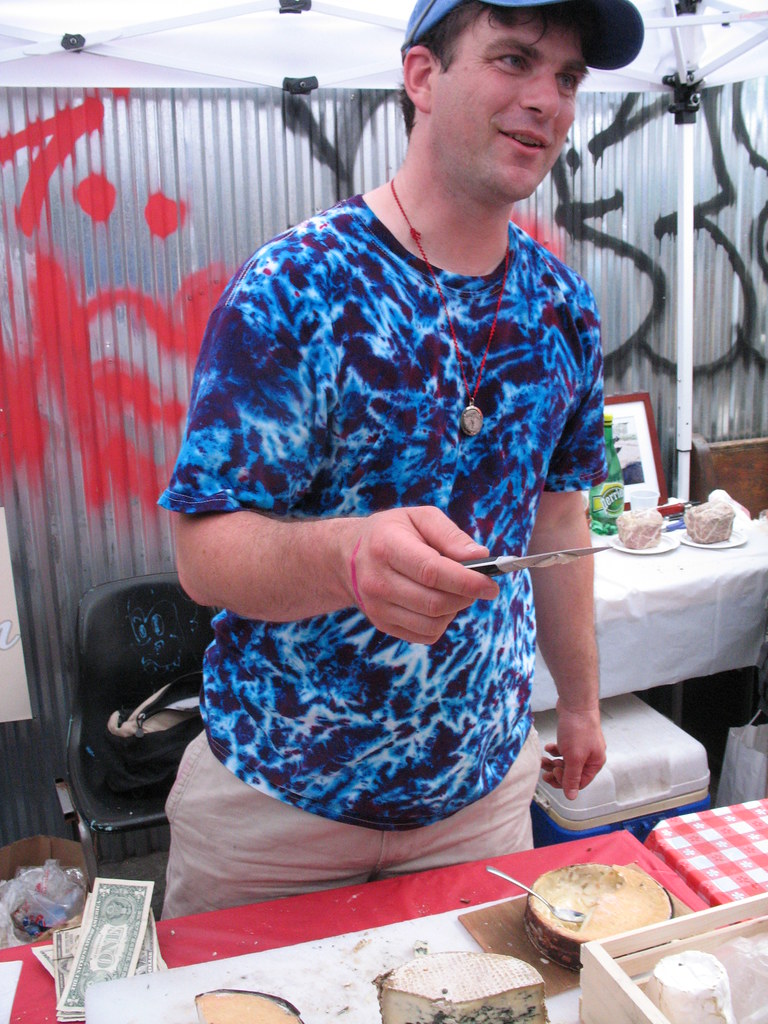 More cheesetherapy came by way of Salvatore Brooklyn, which crafts rich whole milk ricotta from locally pastured cows. They were serving some cannoli, too, but a slick of ricotta on squares of bread was also ripe for the eating — and free. 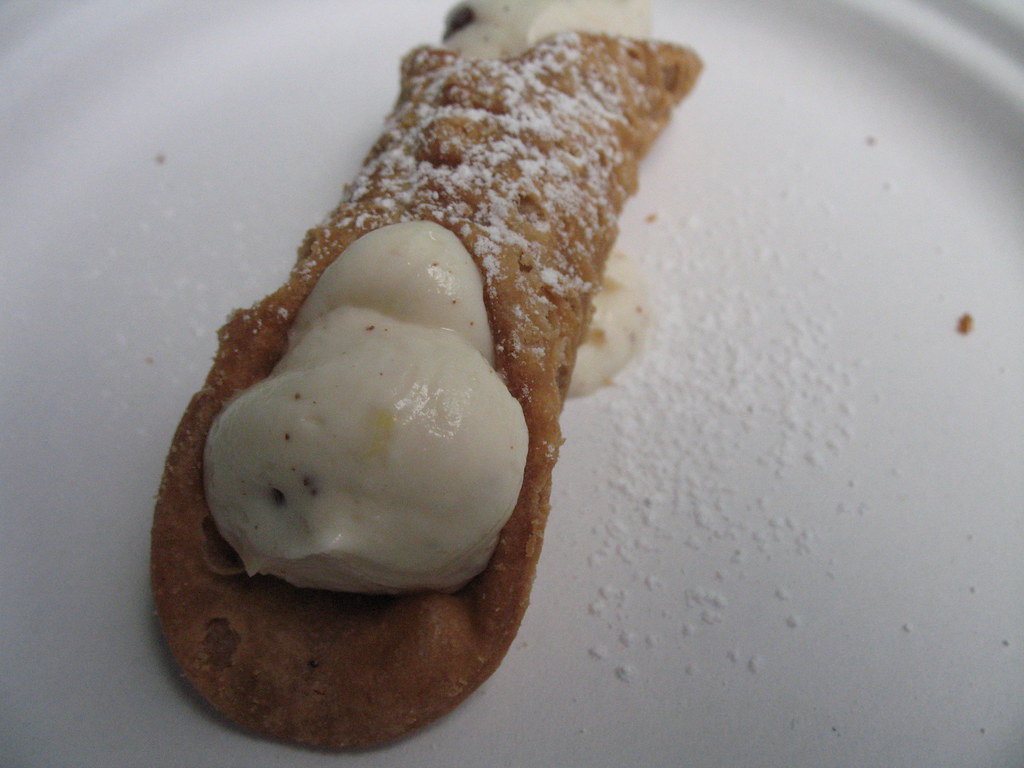 Next up, we tasted terrines, pâtés and — this was a new one for me — pork rillette from Gabriel’s Handmade. This was all very rich for my blood, coming away from the cheese-sperience. But like a true freeloader, I tasted everything on the tray. My favorite was their country pâté with wild ramps. 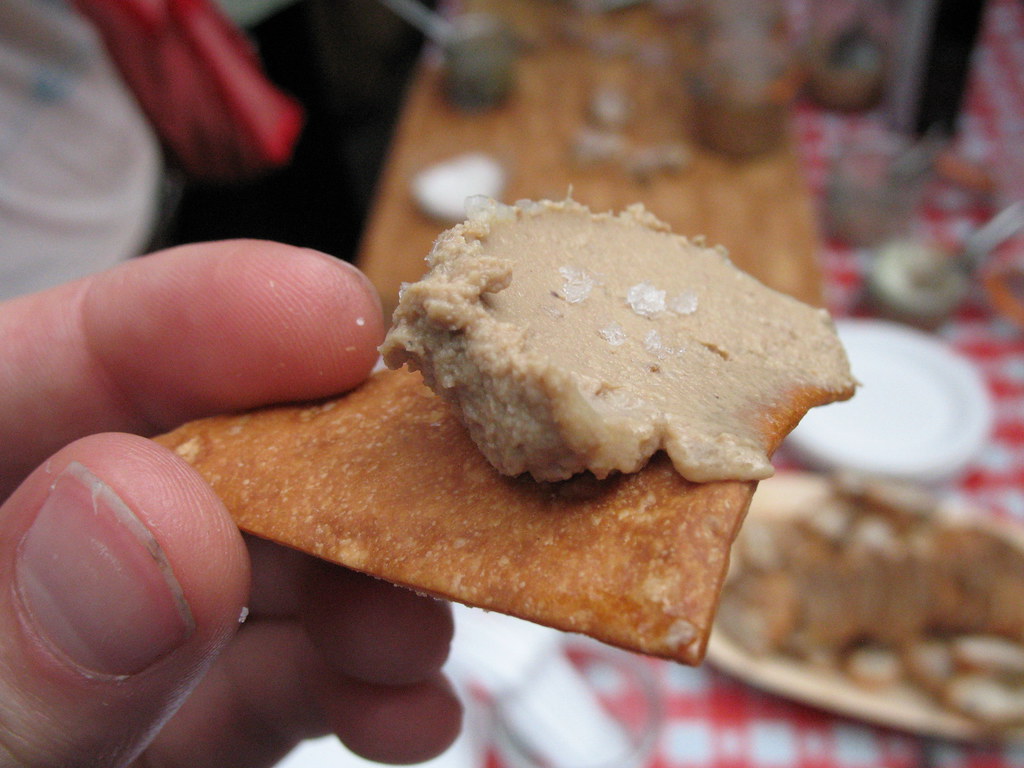 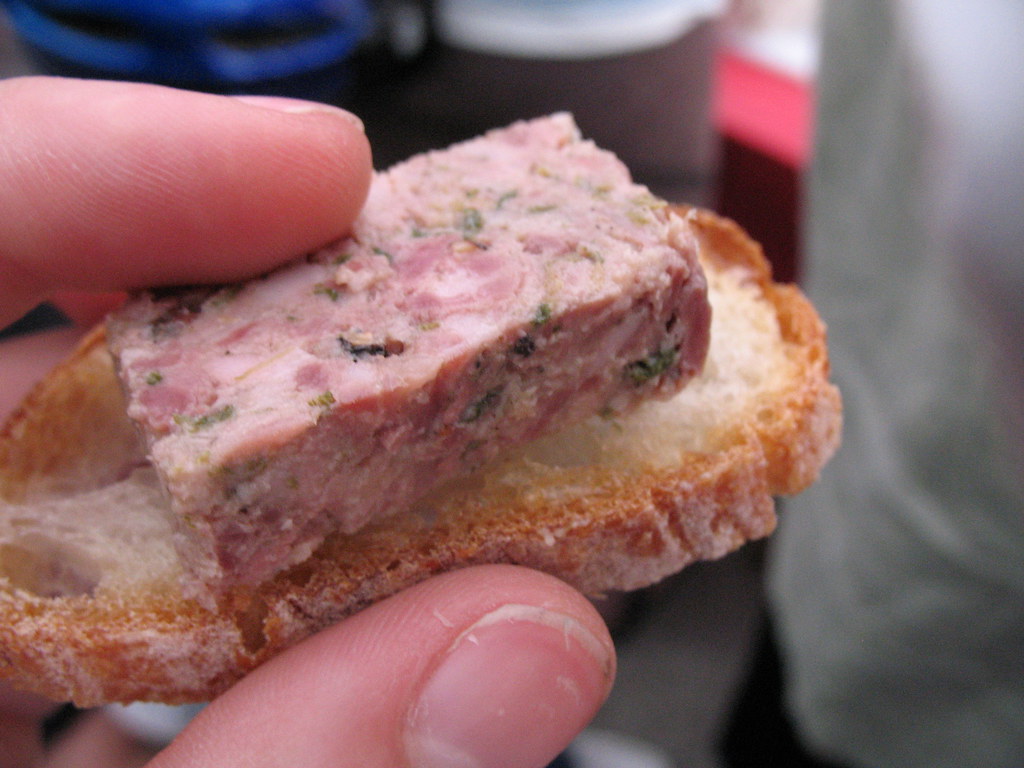 Next I chatted with pals Scott Gold (who I grilled a few months ago here), who was signing and selling copies of his meat manifesto The Shameless Carnivore, alongside Emily Farris, author of the upcoming cookbook Casserole Crazy. It seemed appropriate that there was a grill not too far away at Tamarack Hollow Farm‘s stand blasting smoke from juicy pork belly over to Scott’s table the entire time, where he sat assumably very contented. 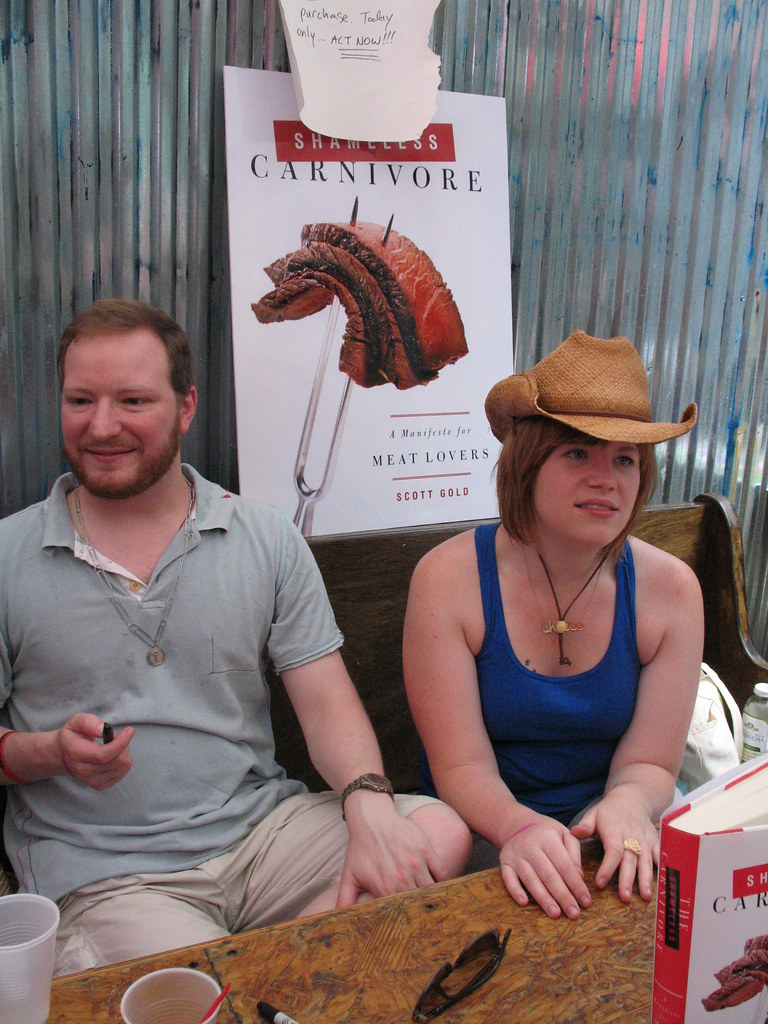 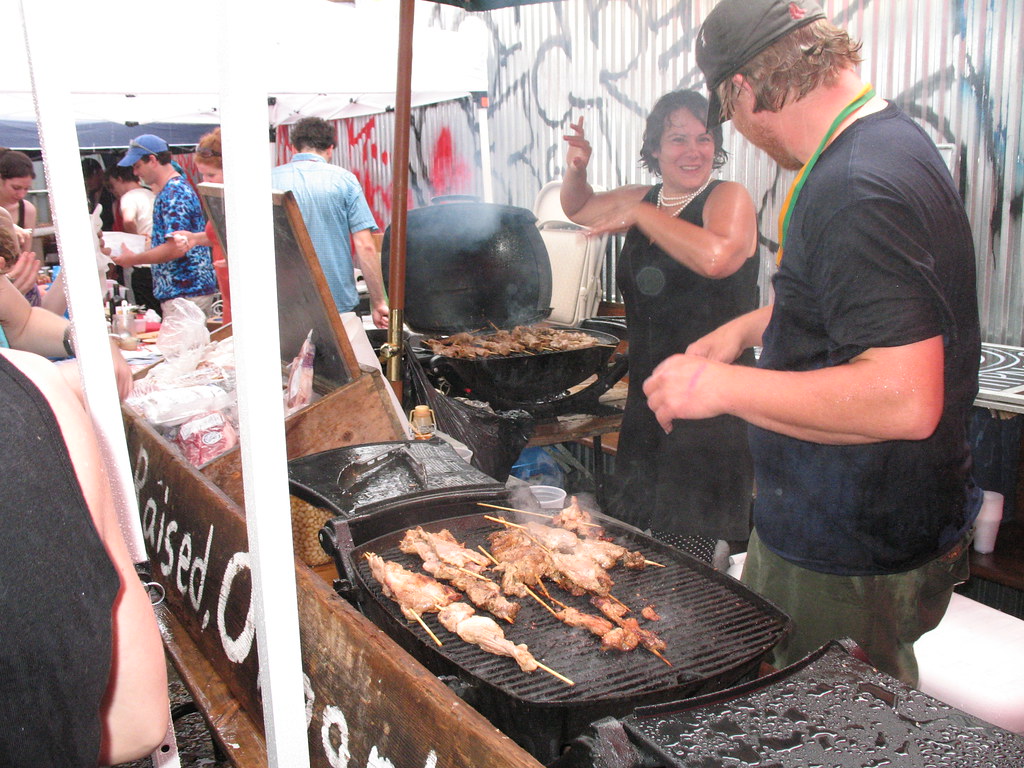 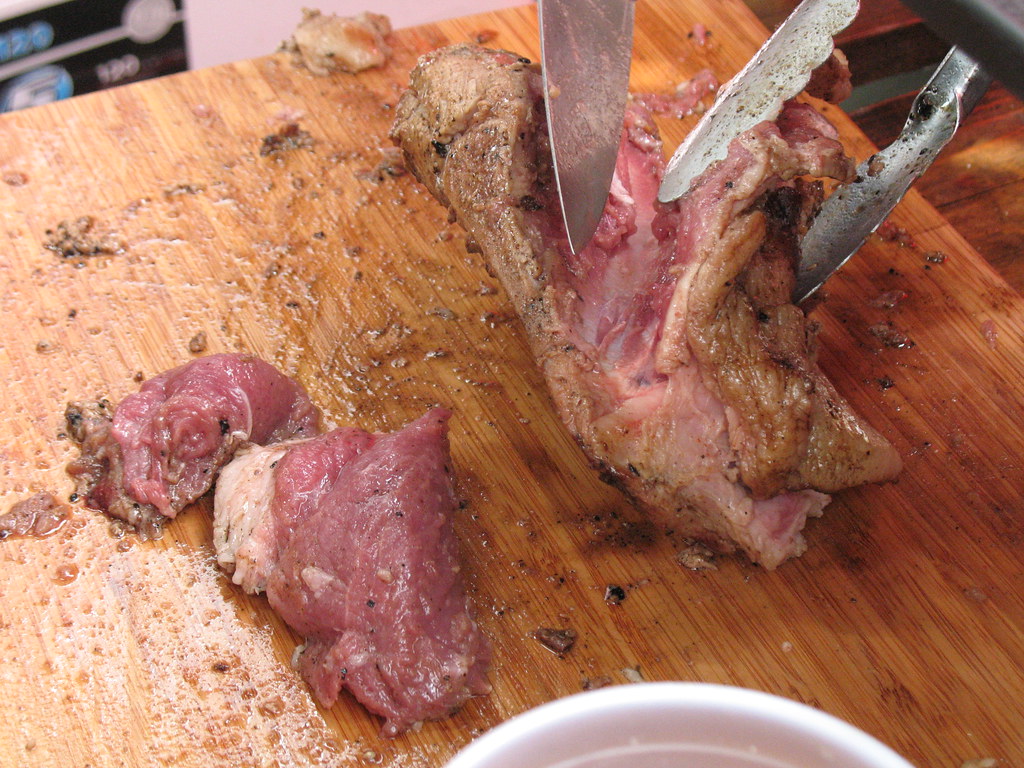 pork was far from “the other white meat” at this show

It was so hot by the time we sweaty-shouldered our way to the end of the aisle of food stands that I just had to have some ice cream. This artisanal glob of purple goodness from Van Leeuwen was just what my tastebuds needed, if not my diet, exactly. 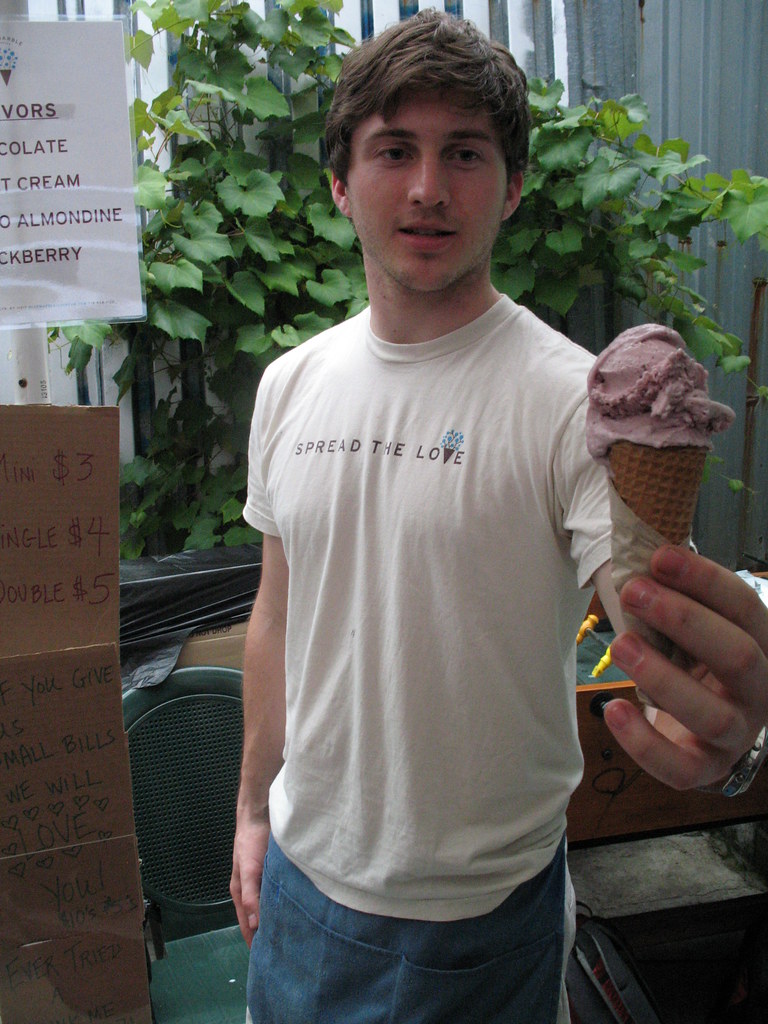 And then, it began to pour. Furiously. We ducked inside the bar for some drinks and a little rest from all the food and crowd, but not before grabbing a bite of homemade organic granola bars from Luminous Kitchens and some tasty (and beautifully wrapped) chocolate from Mast Brothers. 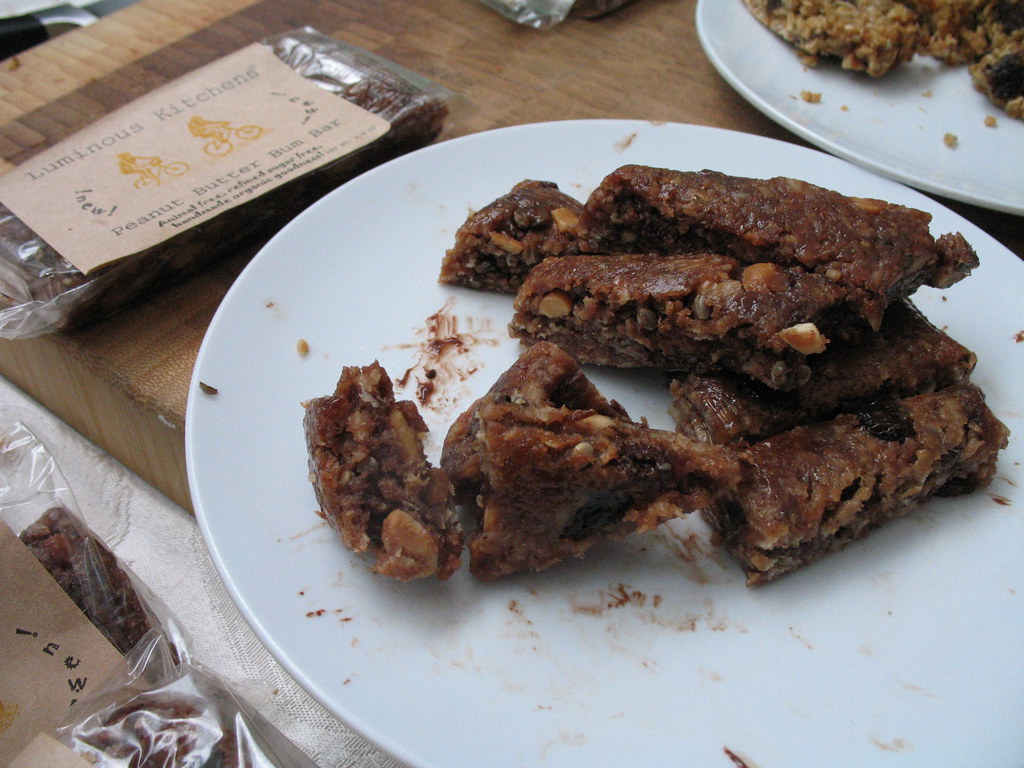 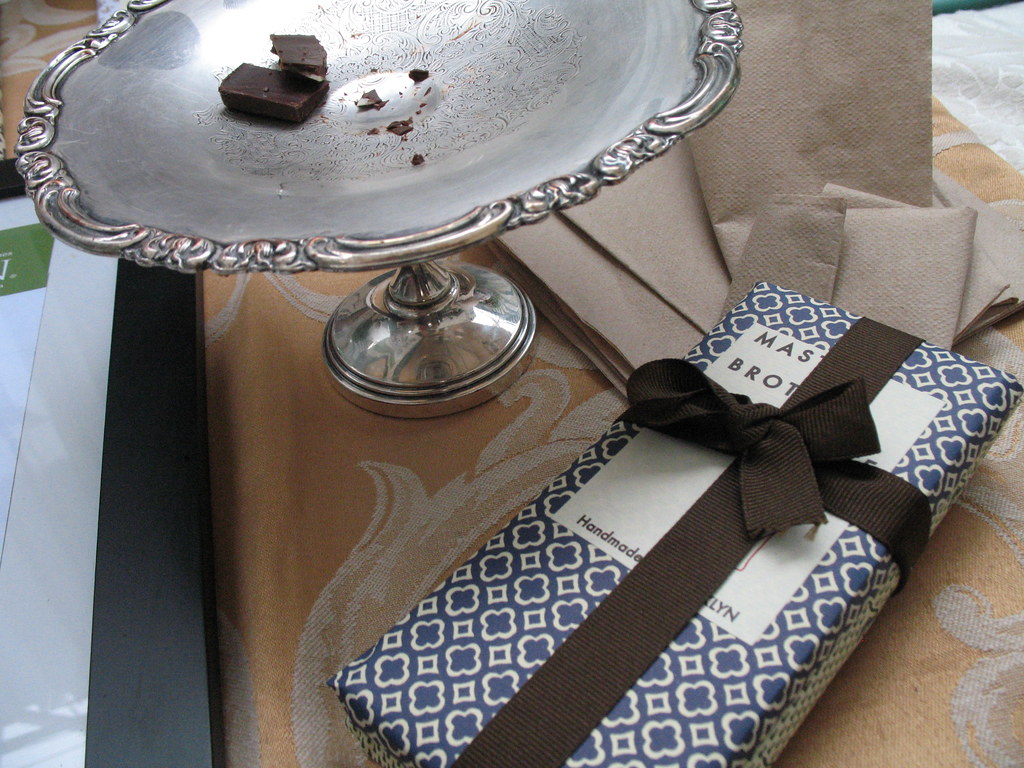 When McClure’s Pickles began serving little glasses of virgin bloody mary mix made with their spicy pickle brine, Matt and I came up with the fabulous idea of grabbing shots of vodka from the bar and pouring it into a proper cupful of the spicy, tangy, dill-y mixer. Bob and his brother Joe were more than amenable to the situation, and gave us money to run out and grab some more tomato juice when theirs was tapped. In addition to pickles and relishes, they were also doling out test batches of some wickedly tasty pickled cauliflower and grainy, porter-infused mustard, which I hope get the green light for mass production soon. Well, as “mass” as craft pickling goes. 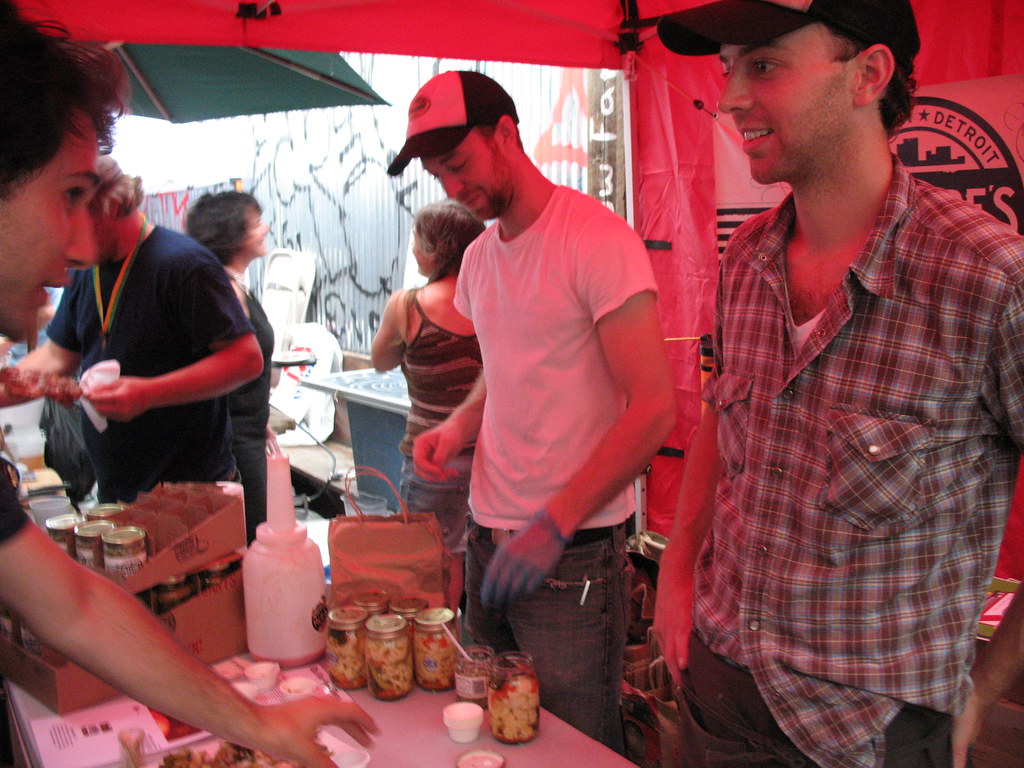 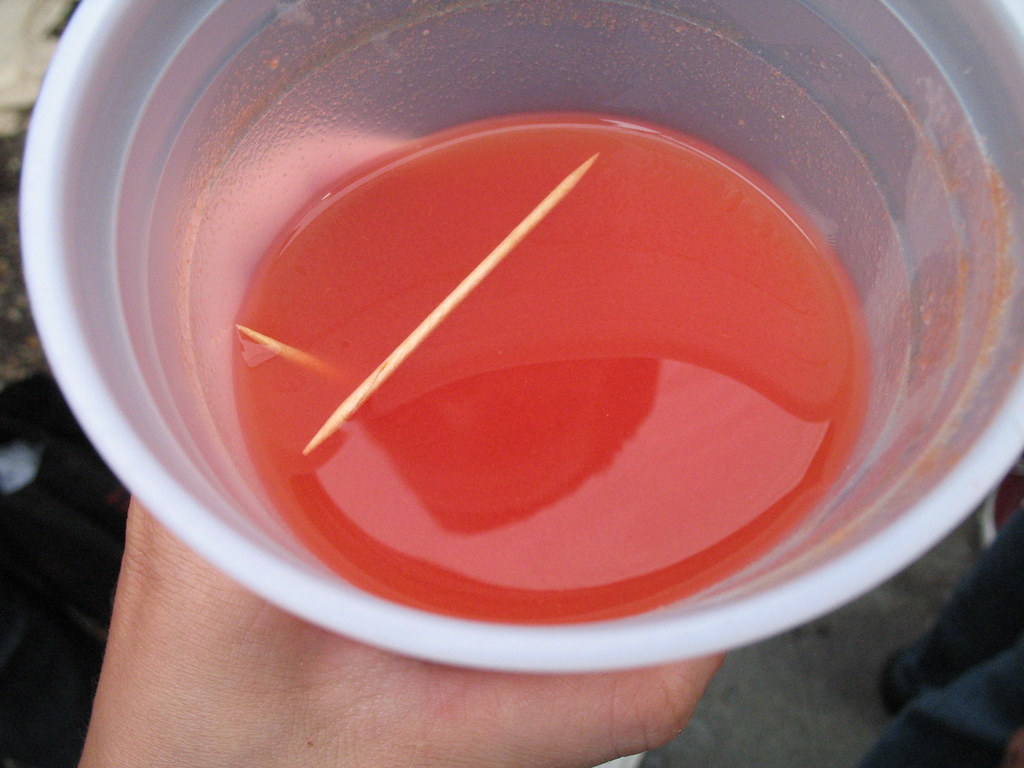 
That’s the toothpick my wedge of spicy pickle was buoyed to shortly before dropping to the bottom of the cup. By the end of the drink, it was spicy, boozy and yes, still crisp. This Bloody McClure’s, as I’ll call it, may have been the best damn thing I tasted at the show (and sealed the deal for my demise at the pool table). But the real highlight of the event for me was getting to meet Julie Powell (of the bestselling book and once-blog Julie & Julia), who is for all intents and purposes my virtual fairy blogmother, and discovering that she is a real person; very nice; and just as funny as she sounds in her writing. 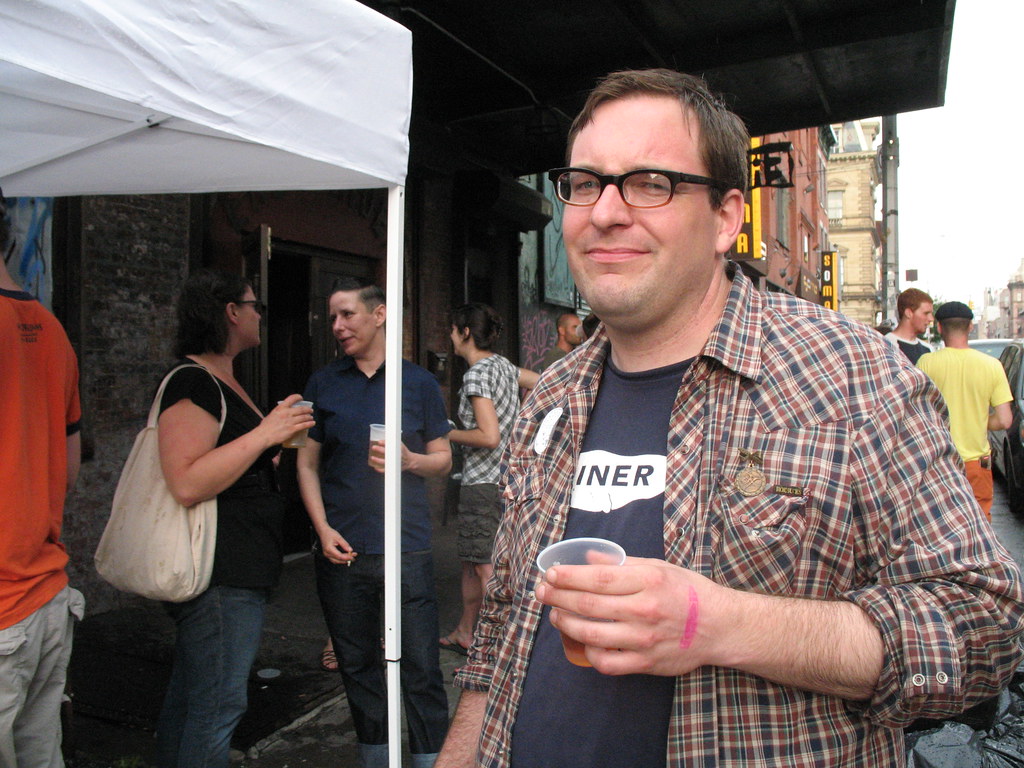 More VIP encounters included Zach Brooks, who writes Midtown Lunch but frequents Brooklyn foodie community events, Erin Zimmer, a staff blogger at Serious Eats (read her write-up here), and finally, Tom Mylan, presiding genius of Unfanciness himself (read about Tom’s vision for the Unfancy Food Show here). Tom was quick to apologize for not putting up good enough tents over the stands, but I thought the constant drips added to the show’s (anti?)-allure. The better it to rain cats and dogs and pigs and rabbits — yes, a live rabbit appeared on a table at some point late in the show that I heard a rumor going around was going to be devoured the same evening by these folks — for true, unrestrained unfanciness. Plus, the day was so hot and muggy that I was drenched in sweat before I could sink my teeth into a spicy pickle. The showers cooled everyone off a bit, and I’d like to think that we all felt sticky, gross, fat, and full together. Hey, we were all shameless carnivores yesterday. 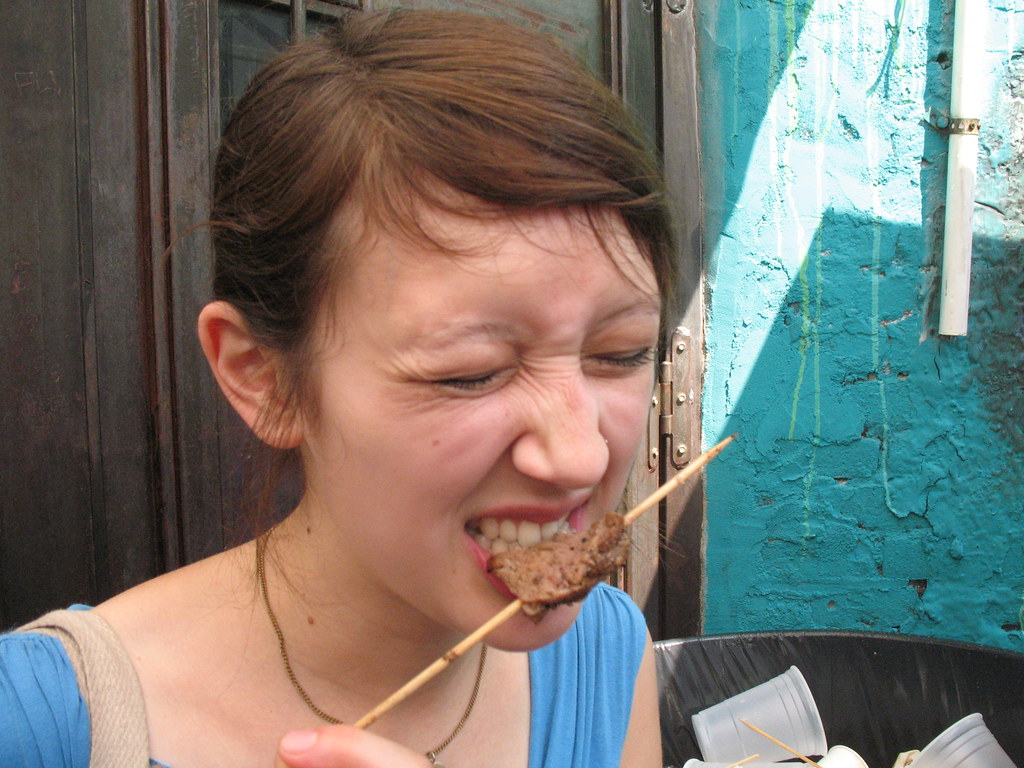 gnash! This is my face on meat

My apologies to the several gracious vendors whose grub I did not snap shots of. They’re all listed on the the event’s official website (and include Hot Bread Kitchen, whose hand-ground corn tortillas totally rocked my fish tacos). Altogether, they made a Brooklyn barbecue to be remembered, while cultivating a delicious sense of community, local and humane food production practices, and crafted-in-small-batches-with-love-but-way-too-cool-to-be-called-gasp-“fancy” fare. Unfancy that.