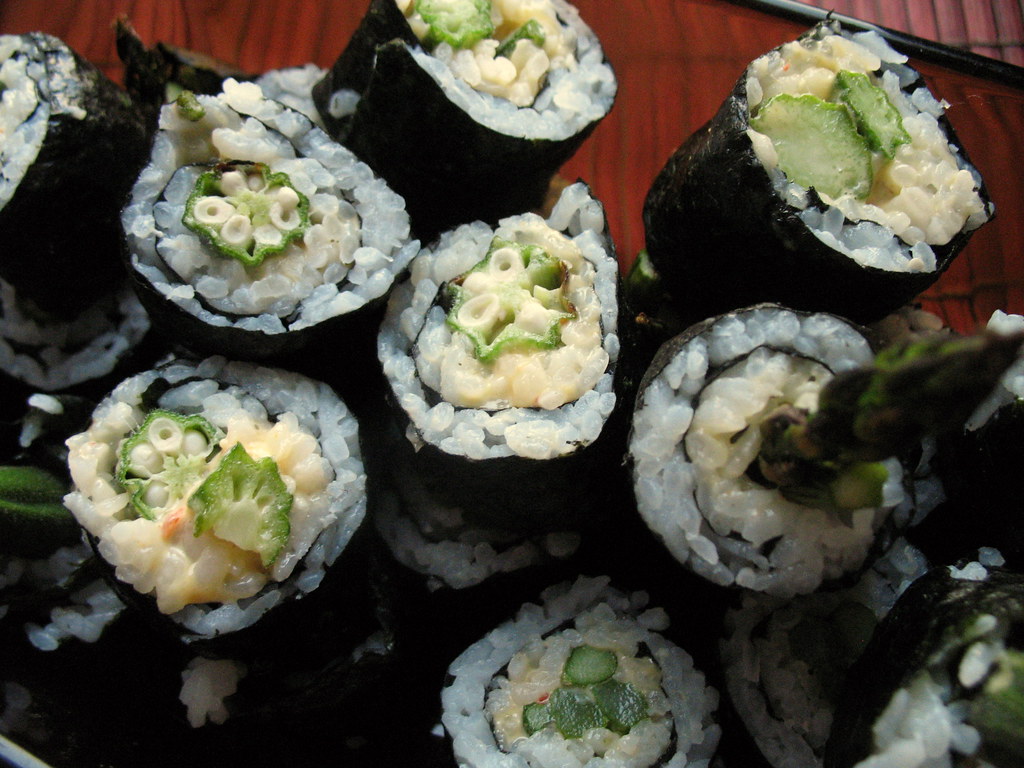 Darn unstoppable cravings. I’ve been hungrier for more things than ever this past month or so, and I don’t know why. I’m fairly certain there’s no chance I’m pregnant unless an alien abducted me during sleep. I’ve been cooking away at a happy clip for about a year and a half now, not worrying too much about troublesome conversions of restaurant to home-cooked foods. Not missing too many of the ones that I hadn’t yet tried to make. And then I get a mouthwatering taste of meaty, jujube-red raw tuna wrapped in chewy nori lodged in my sensory memory. And I stop. Disheartened. 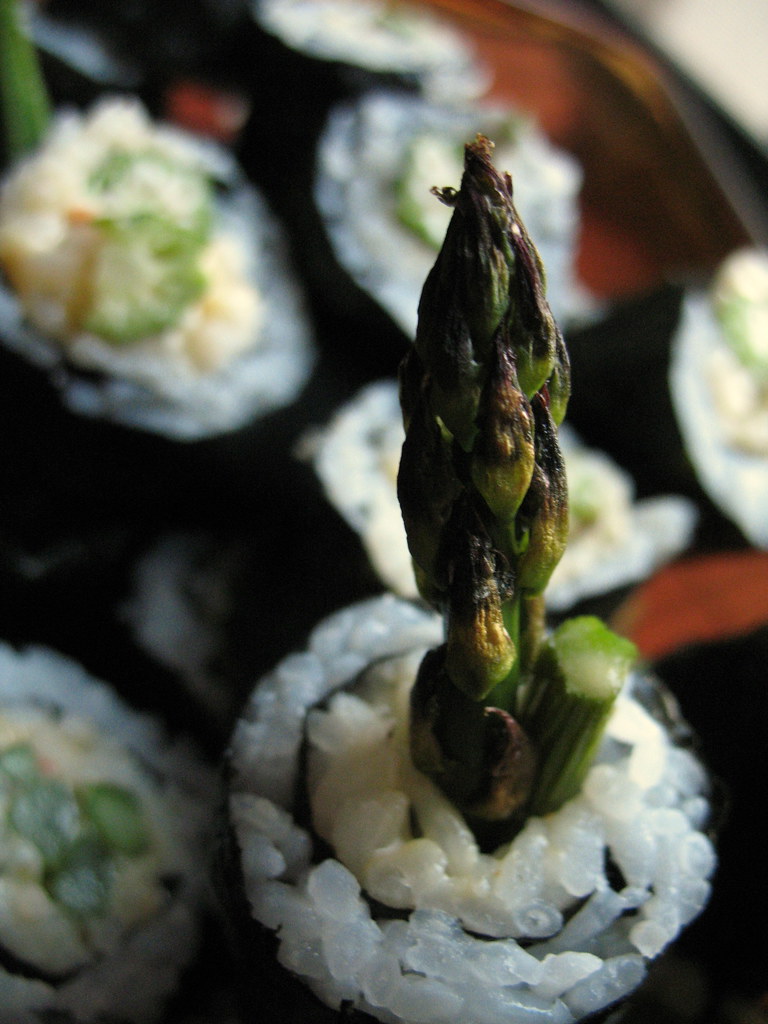 But as with all obstacles in life, you pick up, and move on. I discovered next that it wasn’t really so much the meaty raw tuna that my tastebuds needed to soak up, but the crinkly, toasted nori seaweed wrappers used in sushi rolls. (Okay, maybe I’m just not quite willing to fork over $20 a pound for sushi-grade tuna, either. Though this is something I could have just as easily picked up.) Why does something that I’ve eaten plenty of times in the past, of differing levels of quality and freshness (the worst having enough mercury it’s almost better to eat the canned), have to spook me all the sudden in the middle of the workday? Maybe this is just a month for sensory explosions, when desires are inundated by new possibilities and flavors lurking around every corner. Spring can do that to a person – or to me, at least. Over at Eat Drink One Woman, though, it looks like the Abstain Project on beef is going through a rough patch. (Don’t worry, Ganda, meat in case you haven’t heard is murder.) 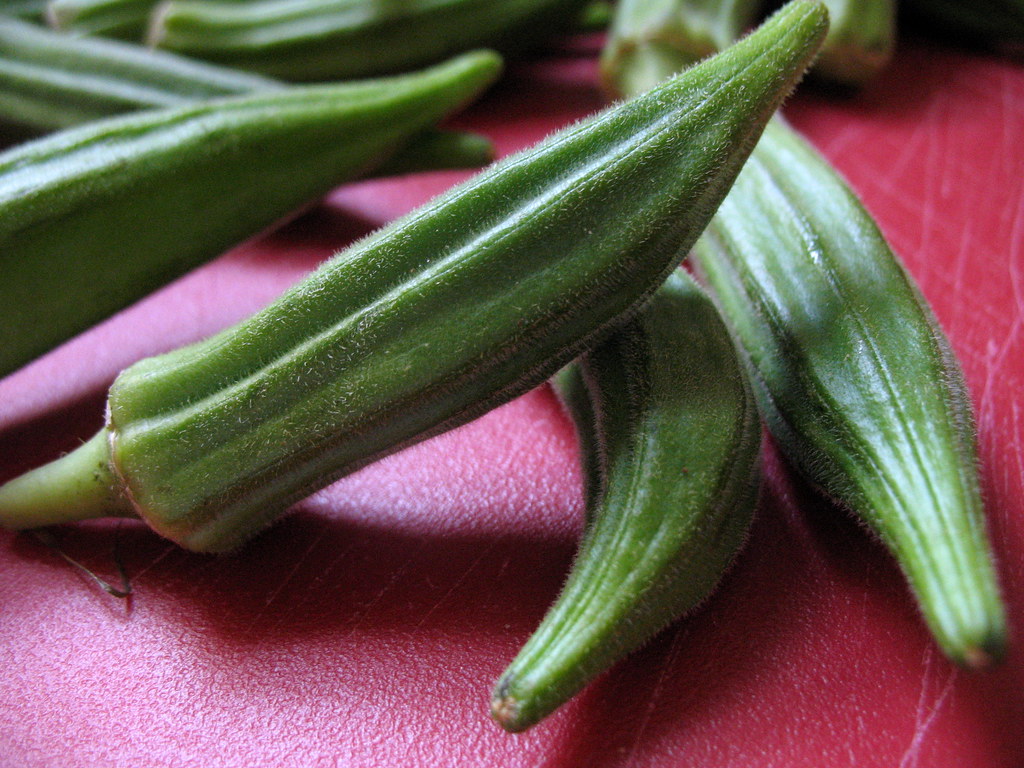 So in the spirit of spring and seasonal vegetables – not meat, not fish, not jelly-textured, slippery, silken raw tuna (aah!) – I did what any sensible person would do: Rolled up some maki-zushi with asparagus and roasted whole okra pods. 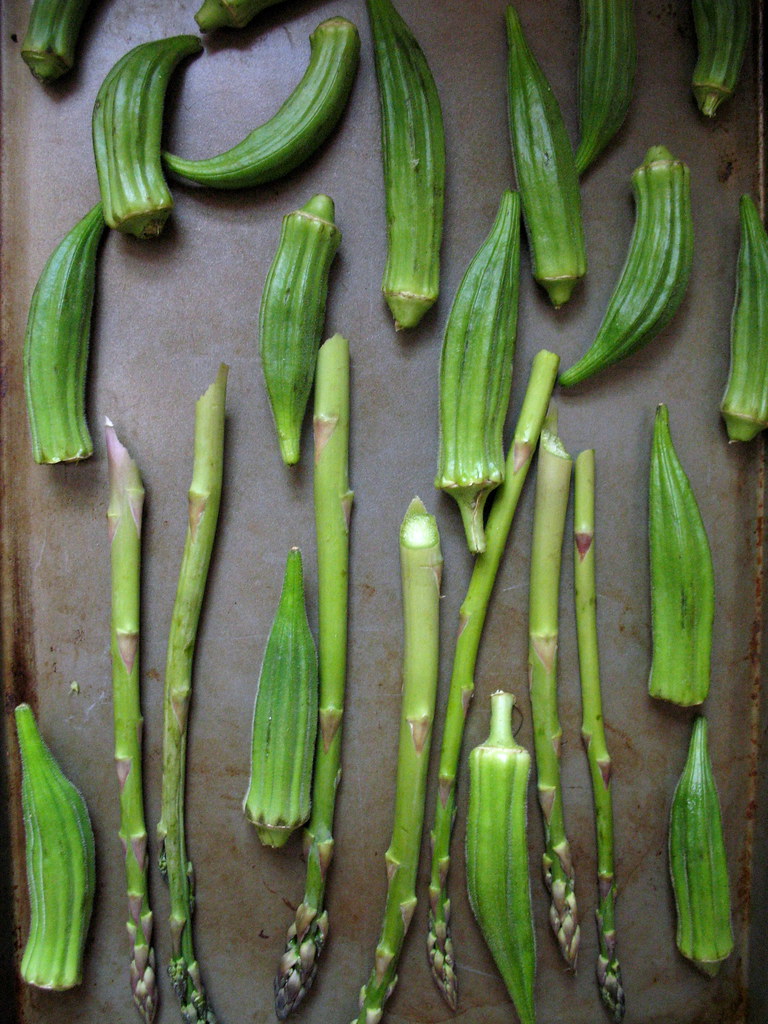 I’m still working on a fat bunch of asparagus I bought at the Greenmarket a couple of weekends ago. After steaming/roasting it in its own juices with egg, slicing it up into my pasta, and eating a few stalks straight up as a salad, it was time for them to put on a new dress. They were still remarkably firm and fresh this week, a sign of its short travel from a farm upstate. Asparagus stalks are quite the perfect length for rolling in a nori square for maki. Once the tougher ends were snapped off (the skinniest of which had none to speak of), I roasted them quickly in a hot oven. I wanted to add a little bite to the roll, like one of my former favorite cheap sushi take-out dishes, the spicy tuna roll. So I smeared some homemade mayonnaise mixed with Sriracha onto the stalks before rolling them up in seasoned rice and nori. 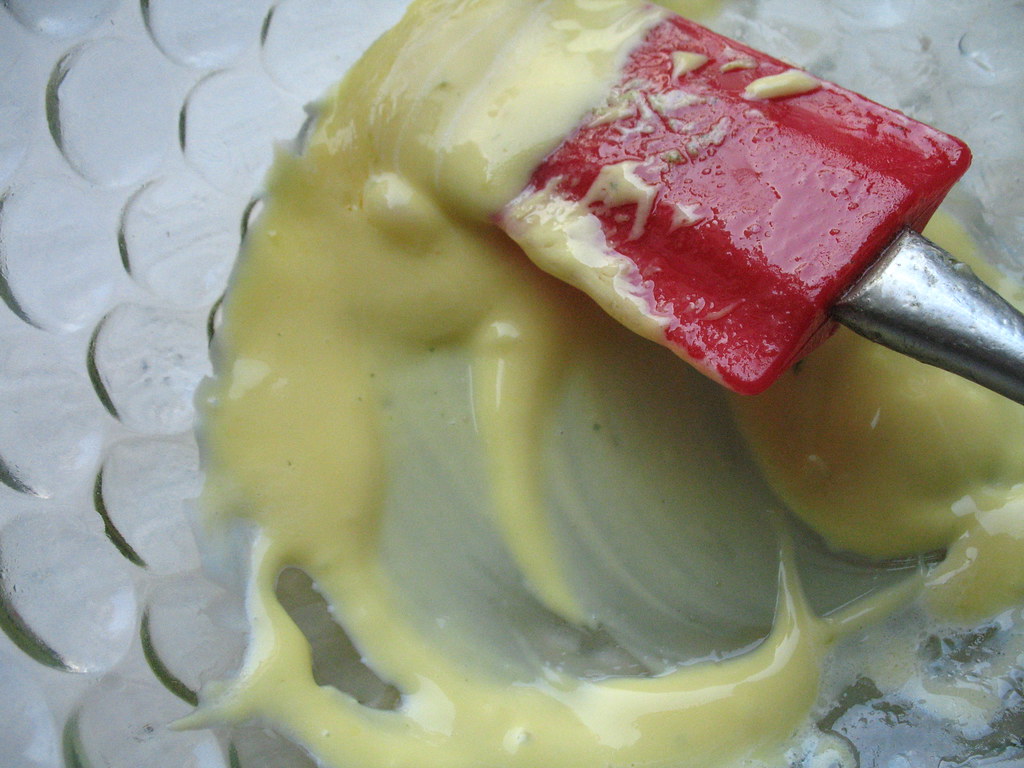 a mini batch of homemade mayo 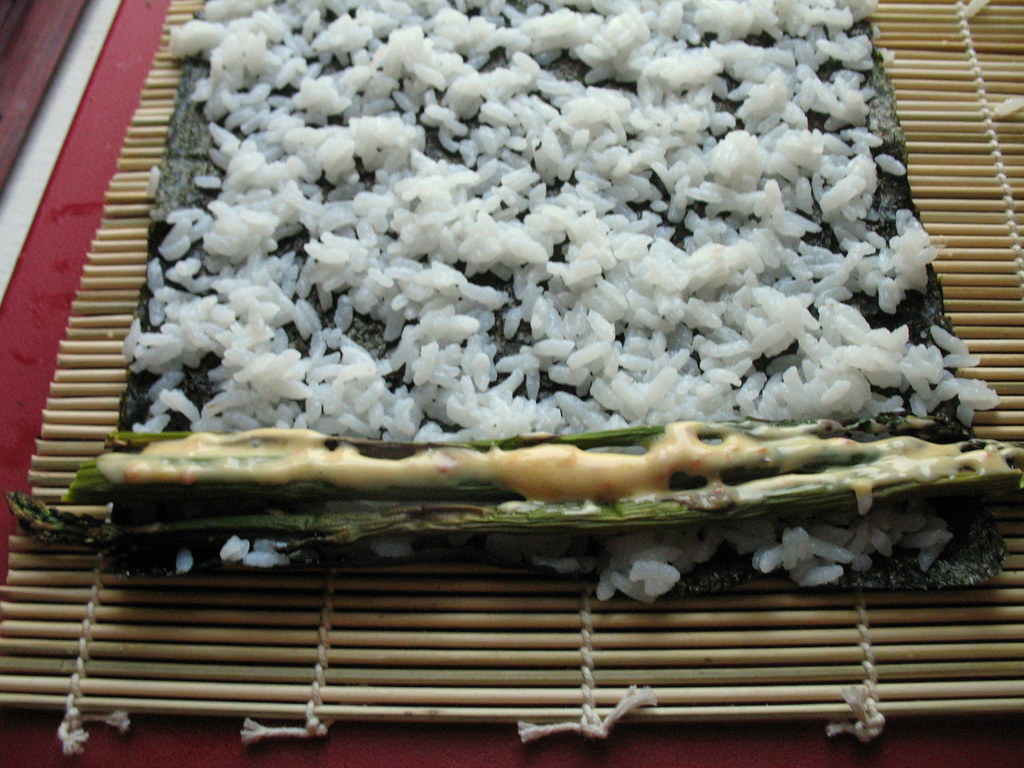 Okra was a natural choice to repeat the exact same procedure with. That is, as long as you enjoy the slimy texture and bulbous seeds inside the pods as I do, rather than find them disgusting. Finally, I forgot to add toasted sesame seeds to both versions, which I’d wanted to. Even without them, they still tasted great.

*if asparagus and okra is still not your thing, you might want to try my earlier recipe for Obama Rolls

3 square sheets of nori seaweed (can be found in packages at most Asian groceries)
1 cup uncooked sushi rice
4 tablespoons sushi vinegar*
about 1 lb fresh asparagus, okra or a mixture of both
¼ cup mayonnaise
2 teaspoons chili sauce, such as Sriracha
toasted sesame seeds (optional)

*I used a bottle of stuff simply called “Sushi Vinegar,” and its ingredients are vinegar, water, sugar and “seasonings.” If you want to mix up your own from scratch, get yourself some Japanese rice vinegar and dissolve sugar and salt into it, following one of these recipes.

Rinse and drain the rice, and cook in a rice steamer according to your machine’s regular instructions. In the meantime, spread about half of the sushi vinegar into the bottom of a large square or rectangular baking pan (unless you have the traditional porous, wooden flat-bottomed bowl, or hangiri, which is preferred). Transfer the rice to the pan and gently mix with a soft rubber spatula, while you fold in the rest of the sushi vinegar. Do not overmix, as you don’t want to break any of the grains. Cover the pan with a wet towel and let cool to room temperature before using.

Meanwhile, preheat oven to 450 degrees. Snap off any tough ends of the asparagus and arrange flat on a cookie sheet or roasting pan along with the whole, washed okra pods, if using. Roast for 3-4 minutes, then stir up the vegetables with a pair of tongs. Roast another 2-3 minutes. Remove from heat and let cool.

Place a square of nori on top of a sushi rolling mat (these are ideal because its long slats of wood distribute pressure throughout the length of the roll). Wet your fingertips, and place little handfuls of rice evenly on top of the nori square. Spread until it has reasonably even, light layer of rice.

For asparagus rolls: depending on how thick your asparagus are, arrange a few stalks about a half-inch away from one end of the nori sheet, on top of the rice.

For okra rolls: Cut off the stems of the okra pods once they have cooled. Arrange thick pods lengthwise a half-inch from one end of the sheet. Overlap a little when you come to skinny, pointy ends so that ideally, every piece of the roll with show a fat cut-out of okra.

Dab one third of the spicy mayonnaise mixture along the length of the veggie filling. Lift up the straw mat on that same side, and roll until the nori covers the vegetables. Without pressing too hard, continue to roll, lifting the straw mat out of the way as you go along, until the entire nori sheet is rolled up. Press down a little bit on the finished roll to secure the ends (the sticky rice should help the roll stick together). Using a very sharp knife, cut the roll into five or six pieces. Place the pieces cut-side-up or down on a plate. Serve with wasabi and soy sauce.


Three brownie points: Fantastic. I can’t say any more about okra and asparagus than I already have, in terms of Vitamin A, B-Vitamins, Calcium and much more low-calorie nutrition. The high sodium content of nori is worth noting, as all the great health benefits of seaweed comes with this small price.

Five maple leaves: Looks at first may be deceiving. There’s really only vegetables, rice and seaweed at hand (and a little mayonnaise made from cage-free eggs), only one ingredient out of these is seasonal and locally harvested: asparagus. Okra season comes a little later on for the Northeast, so the ones I found at a produce market were shipped. They just looked so enticing, fresh in their pods. So help me God.