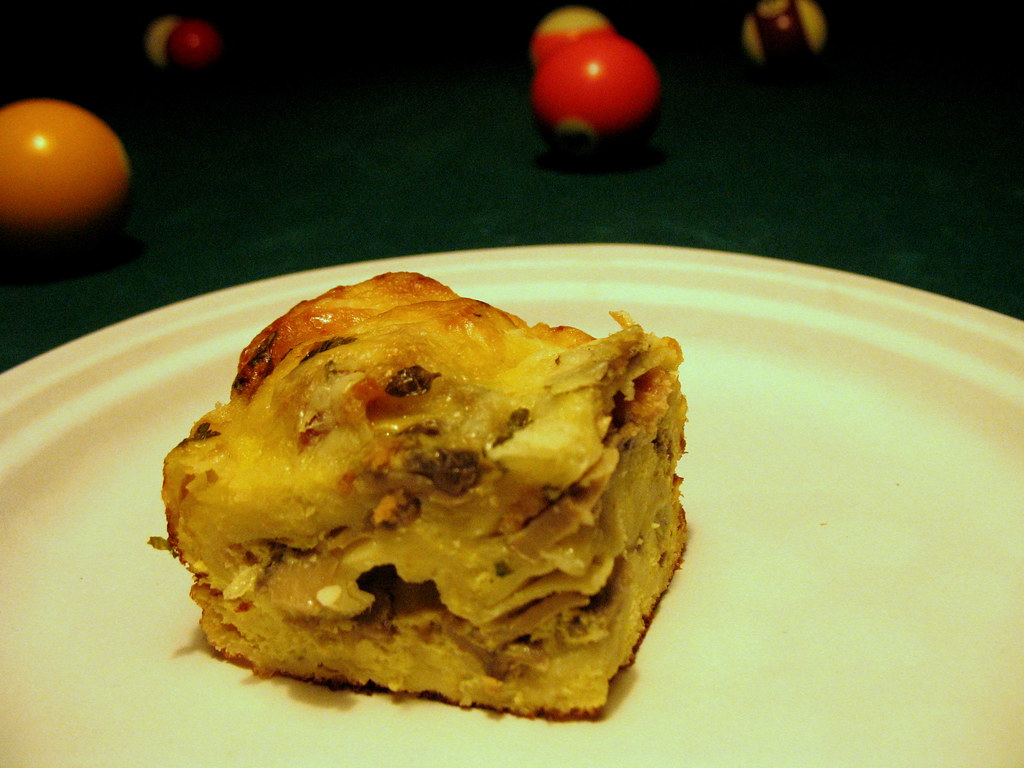 What do breakfast, lasagna, free pool tables and cheap pints of beer have to do with one another? Nothing. Except that they’re sloshing around inside of me as I write this (the free pool more figuratively, say an X-ray glimpse into my stomach with sound effects) a few short hours and not enough sleep after indulging in all. I trust that you could skip the last two items in that equation and have yourself a mighty fine meal out of breakfast lasagna, however. And unlike my last recipe, this one should give you plenty of time to plan ahead for a savory weekend brunch. Or is it dinner? 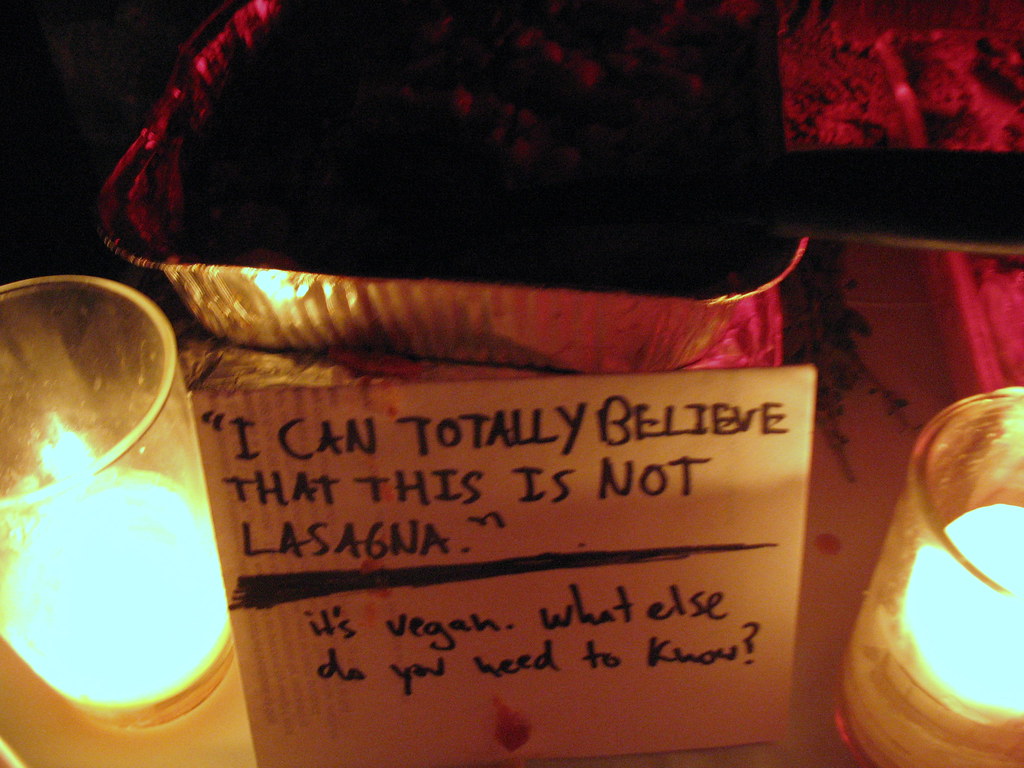 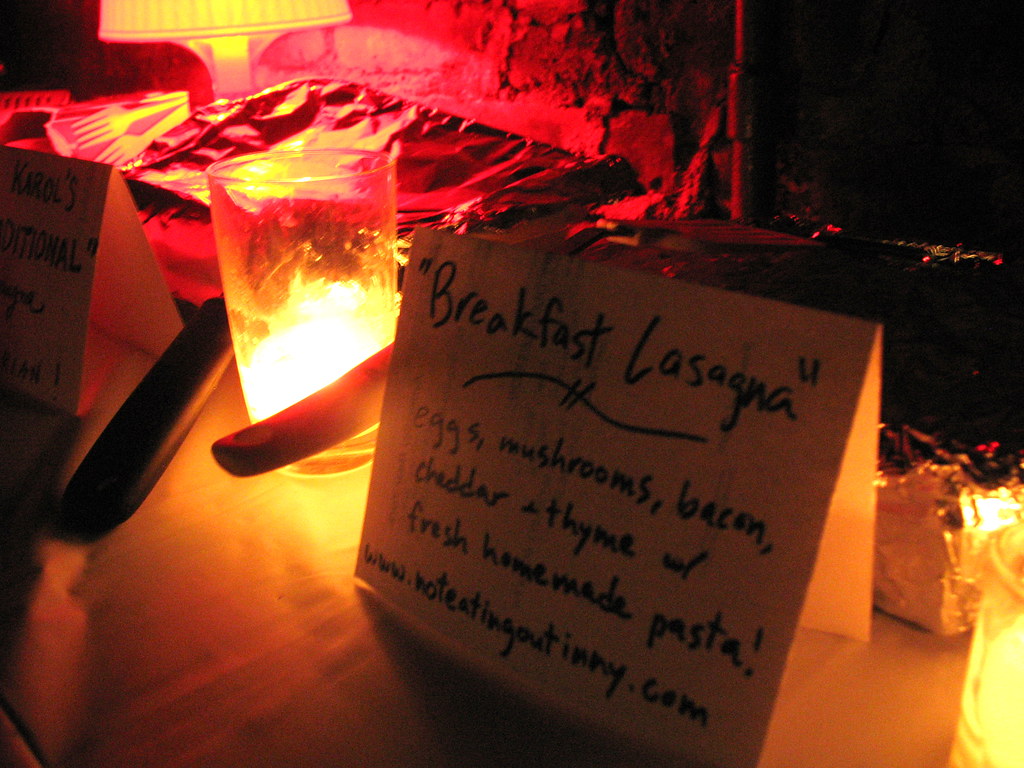 When my friend and co-host of the upcoming Risotto Challenge Karol asked me to bring something for a “Lasagna Showcase” at a happy hour party for Billiardsburg, I instinctively imagined a sleek, shiny casserole molded in the shape of a car, perhaps inside a glass cube display case. Of course, there would be no dramatic carving involved, but the name alone put on intense pressure on to dazzle. Why lasagna, I asked? Because everybody likes it, came the response. It’s cheesy, crusty, gooey, classic American fare loved by my generation in no small part thanks to Garfield. And since I’d be serving this lasagna to many beer-drinking, billiards-shooting strangers, I thought I’d merge the dish with something else that everyone likes: breakfast. 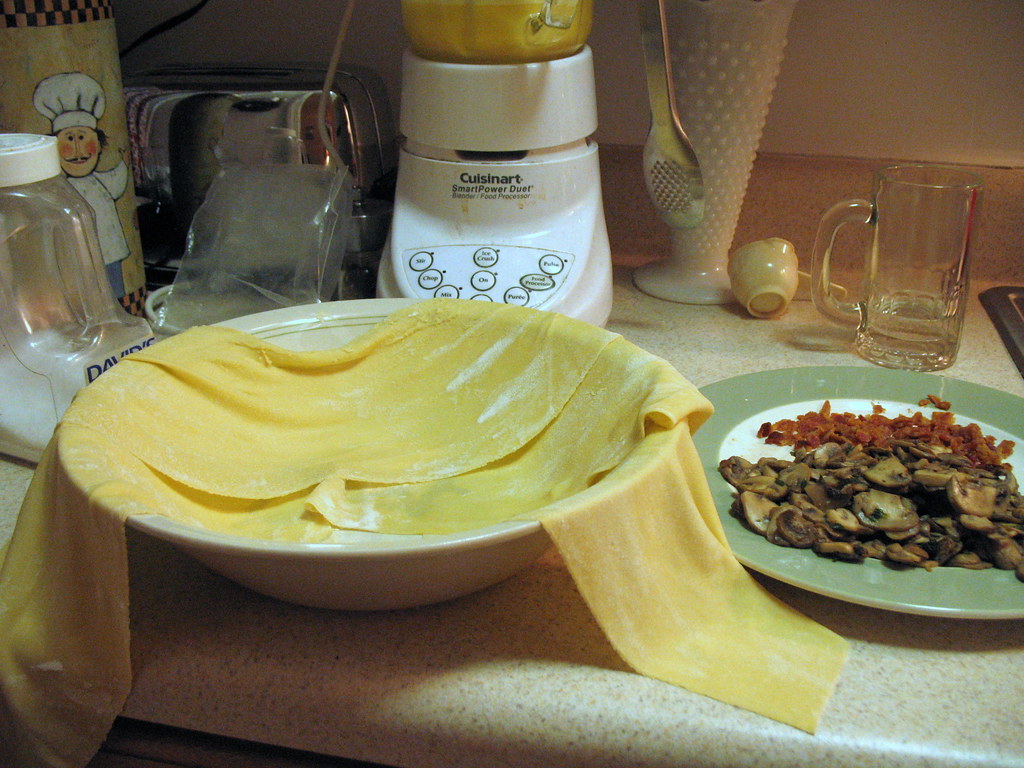 the prep kitchen in full-swing 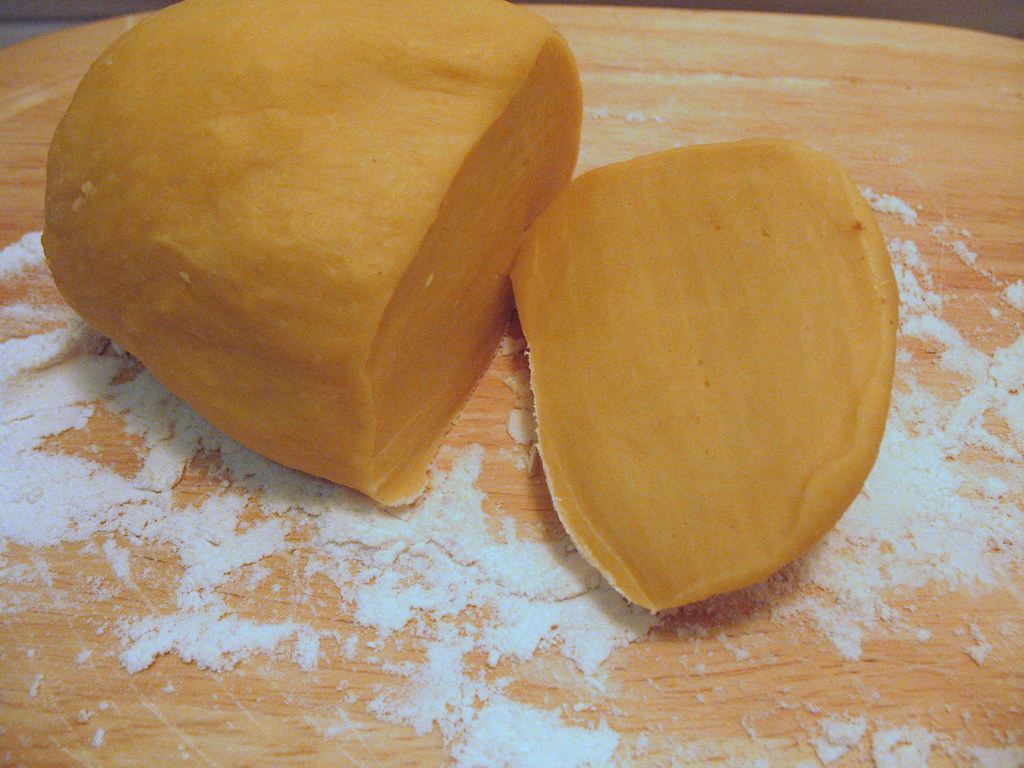 
A series of unfortunate events occurred during the making of this unlikely dinner special (which is only natural, since I was preparing it for a room full of hungry people instead of just myself). First, the half-and-half in my refrigerator had soured to a disgusting goop — thank goodness for late-night bodegas. Then, the pasta-like noodle sheets I’d planned on using were likewise rotten and bluish. So much for checking inventory beforehand. I’m actually glad that the latter error forced me to turn to the only other option in sight — mixing, kneading and hand-cranking out fresh lasagna sheets from a couple of eggs and a cup of flour. (I’ve said it before and have to say, once again, that cooking at home can be a good way to get a workout.) Once this fresh pasta was baked into the egg casserole and served up in squares, it had absorbed the dish’s flavors and grown to chubby, flaccid layers soft enough to cut through like cake. 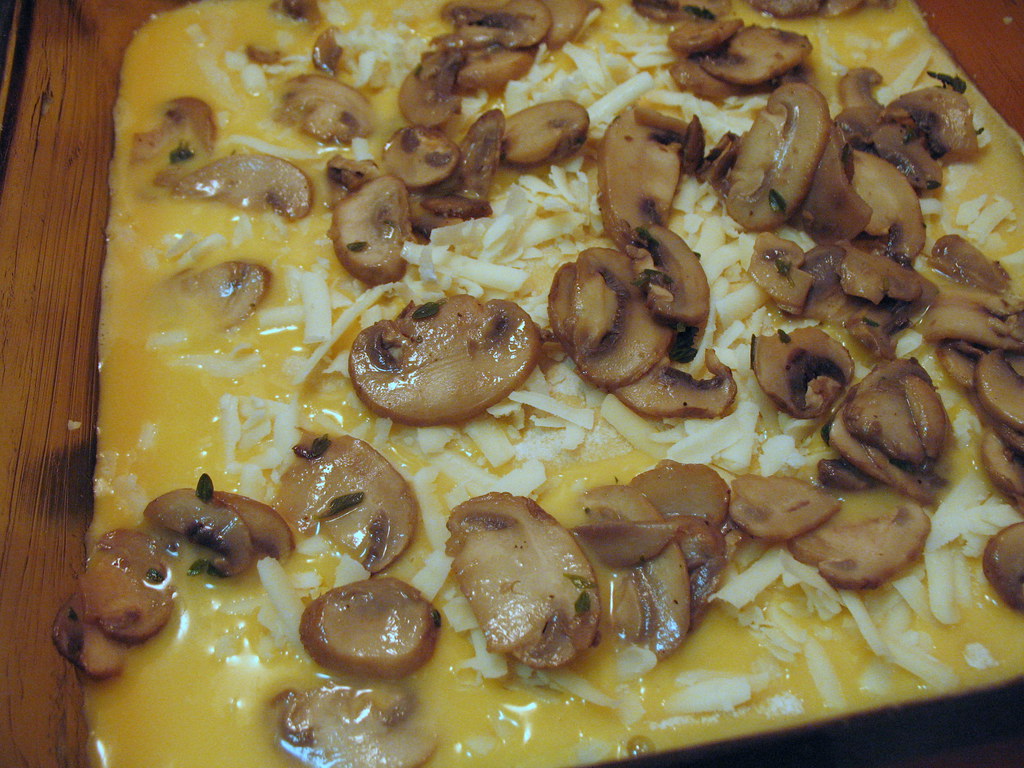 a layer of pasta floats atop eggs and gets topped 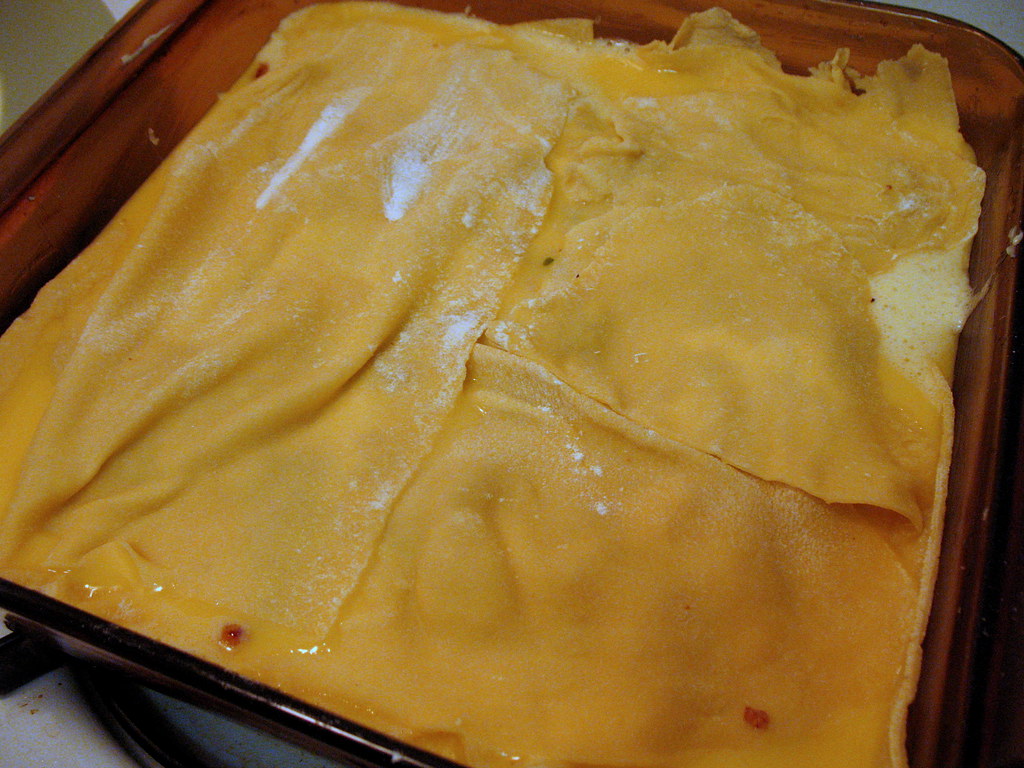 and topped again, with more pasta


Anything goes when it comes to veggie, meat and cheese additions in this dish. Perhaps fresh tomatoes and basil would have been nice as a nod to more traditional lasagnas, but since they’re both out of season, I opted for button mushrooms, sautéed quickly in butter and a bit of thyme. Kicked up with crumbled, crispy bacon and tiers of shredded cheese, voilà — breakfast lasagna casserole… thing. Was served. 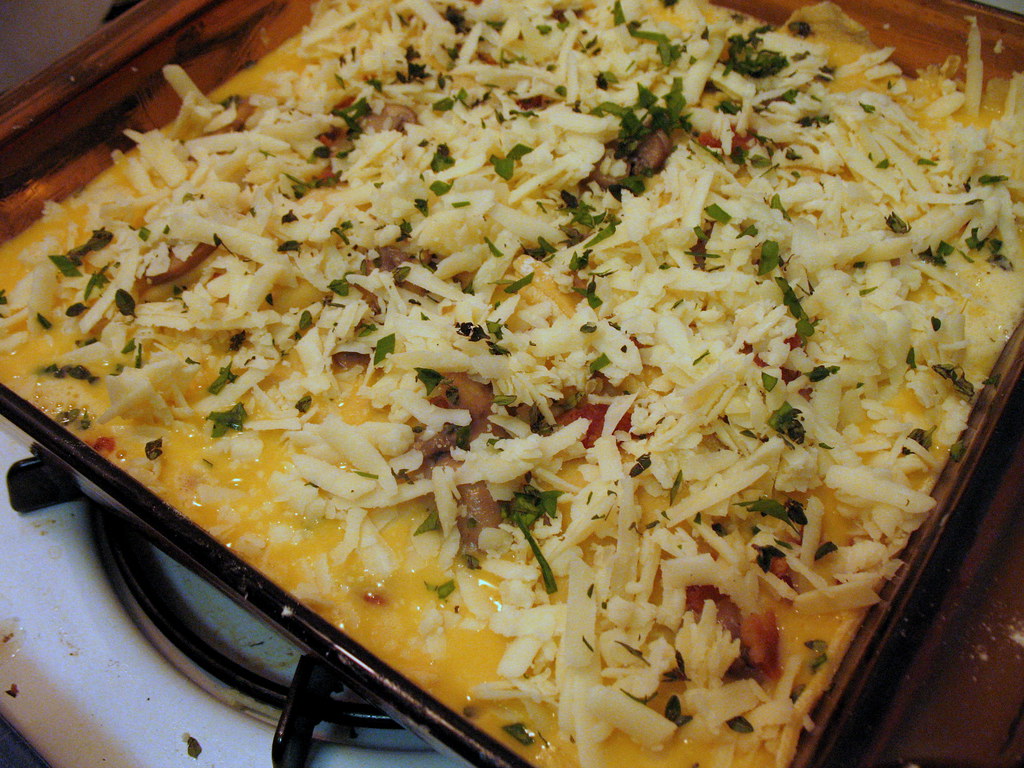 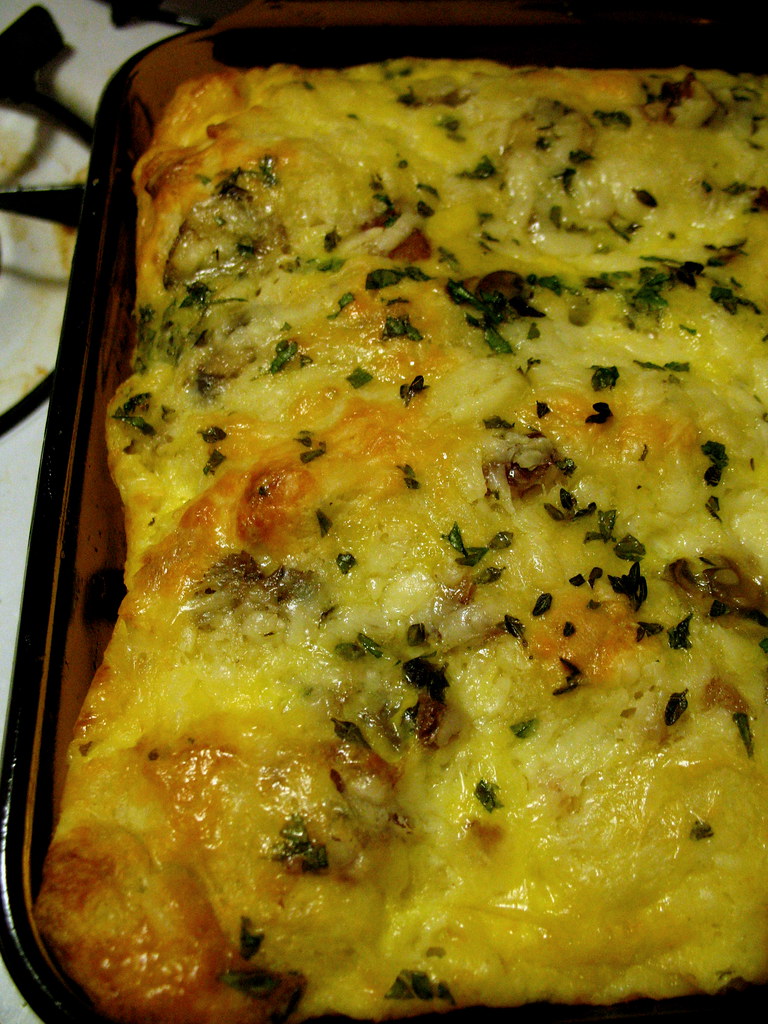 and out, 30 minutes later

Breakfast Lasagna with Mushrooms, Bacon and Cheddar
(makes one 9″ x 9″ casserole, or 6-8 servings)

Put the flour in a large, flat-bottomed bowl or wide surface area and create a well in the center. Crack 2 of the eggs into the center and mix up the yolks with your finger. While spinning the eggs with your finger, gradually bring in more flour from the edges of the well. Keep doing this until you have a workable dough to knead (add more flour if it sticks to your hands, or a spoonful at a time of water if it’s too dry that it won’t come together). Knead dough for at least ten minutes. Cover and set aside for 15 minutes while you prepare the rest of the ingredients. When the dough is ready, cut it into three separate pieces and lightly flour each one before pressing it into thin pasta sheets following your pasta crank’s directions. (If you absolutely insist on not having one of these devices, I suggest a heavily floured rolling pan.)

Preheat oven to 375 degrees. In a blender or with a whisk and a large bowl, beat together 7 of the eggs, the milk, and a pinch each of salt and pepper. Heat the butter in a pan and add the mushrooms and half the thyme. Season with a pinch each of salt and pepper. Cook, stirring occasionally, for about 4 minutes, or until the mushrooms have cooked off most of their liquid. Heavily grease the interior of a square baking pan with the remaining tablespoon of butter. Pour about one-third of the egg mixture into the bottom of the pan. Top with one even layer of the fresh pasta sheets (you may need to cut them in order to fit nicely). Top the pasta with about one-fourth of the shredded cheese. Top this with one-third of the mushrooms, and one-third of the bacon. Add another pasta layer on top. Pour on another third of the egg mixture, then top with another pasta layer. Top with one-fourth of the cheese, and almost the rest of the mushrooms and bacon. Top with another pasta layer, another egg layer, and another pasta layer, or continue layering according to how many ingredients are left. Sprinkle on the very top of the casserole no less than one-fourth of the shredded cheese, the rest of the thyme and a little ground pepper. Bake at 375 degrees for about 30 minutes, or until top has lightly browned. Let cool at least ten minutes before serving.


Seven brownie points: Recent research suggests that eating breakfast can actually help you lose weight in the long run. If only that applied to eating breakfast outside the morning hours. Until that’s been studied, I think it’s safe to say that this is not your healthiest option, for any time of the day. The eggy pasta dough is only the beginning of a cholesterol breeding ground: bacon, cheese, milk, more eggs. That’s practically all it is. For a healthier version, this could go with a lot more representation from the veggie faction, something traditionally overlooked in a typical American breakfast.