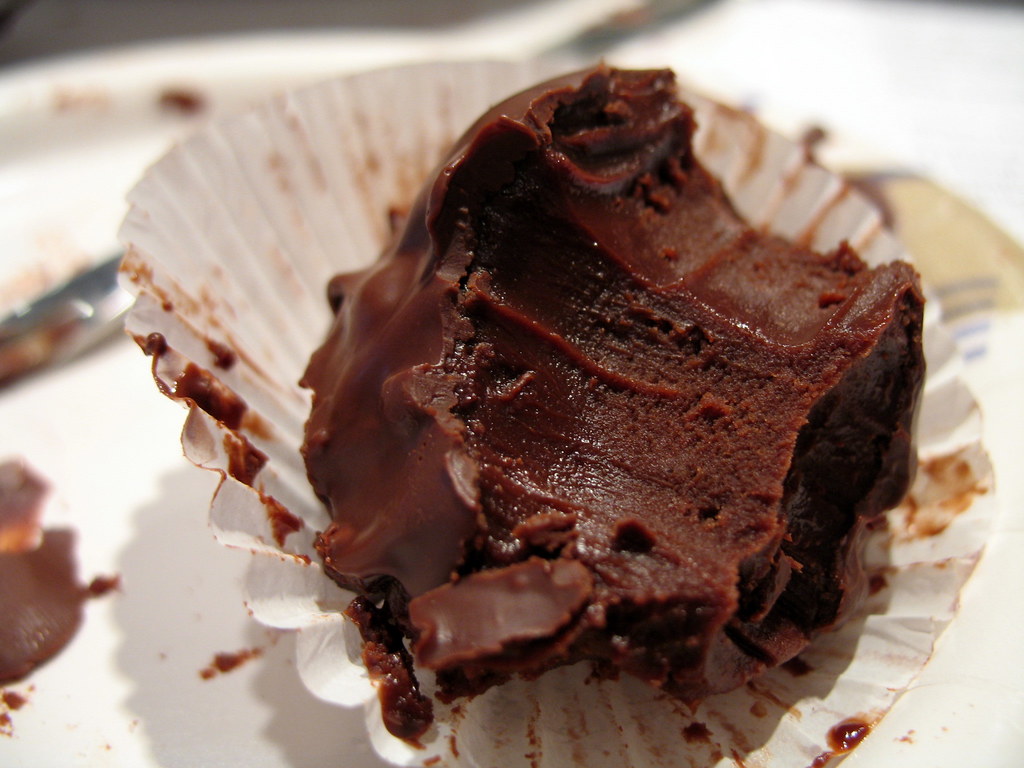 Let me tell you, it’s serious. After my prize weekend trip to the Copia center’s annual Death by Chocolate festival and private tour of Charles Chocolates factory thanks to Culinate, I estimate my blood is 72% cacao right now. I may not have died by chocolate, per se, but I think I consumed enough of it to experience the old wives’ tale that chocolate can actually give you a caffeine high (stomachache notwithstanding). And I couldn’t have planned a grander finale for the weekend than for my entire body, and all the clothing I brought on the trip, to be covered with a fine, powdery layer of deep brown cocoa due to a wee little accident involving a canister of cocoa.

As I was leaving the airport, I thought I smelled a whiff of chocolate – but of course, that was nothing unusual by then. When I reached into my backpack to investigate, my hand went into an empty cardboard tube. That’s when I remembered that, in the midst of Saturday’s festivities, Mark from Culinate had handed me a tall canister of high-end Dutch process cocoa. Sure enough, the first piece of clothing I pulled out of the sack released a billowing cloud of cocoa cumulus that settled, among other places, onto the snowy parking lot. I think there’s still some in my nose. 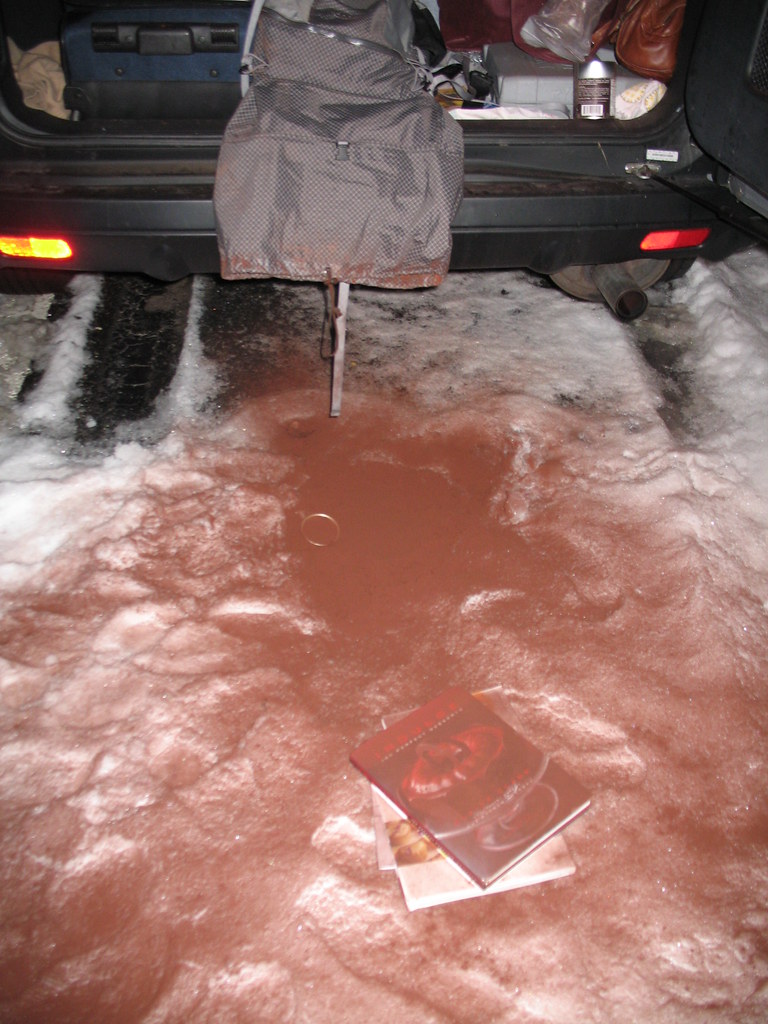 disaster by chocolate: Dutch process cocoa explodes in my luggage, scenting my clothes, my underwear… yeah.

Chocolate is great, don’t get me wrong. They say it’s the perfect substitute for sex. Maybe they weren’t thinking of clogging your hair follicles with it, or substituting it for self-tanning powder, too. But let’s just say that with any hedonistic pleasure, there are dangers associated with overabundance. 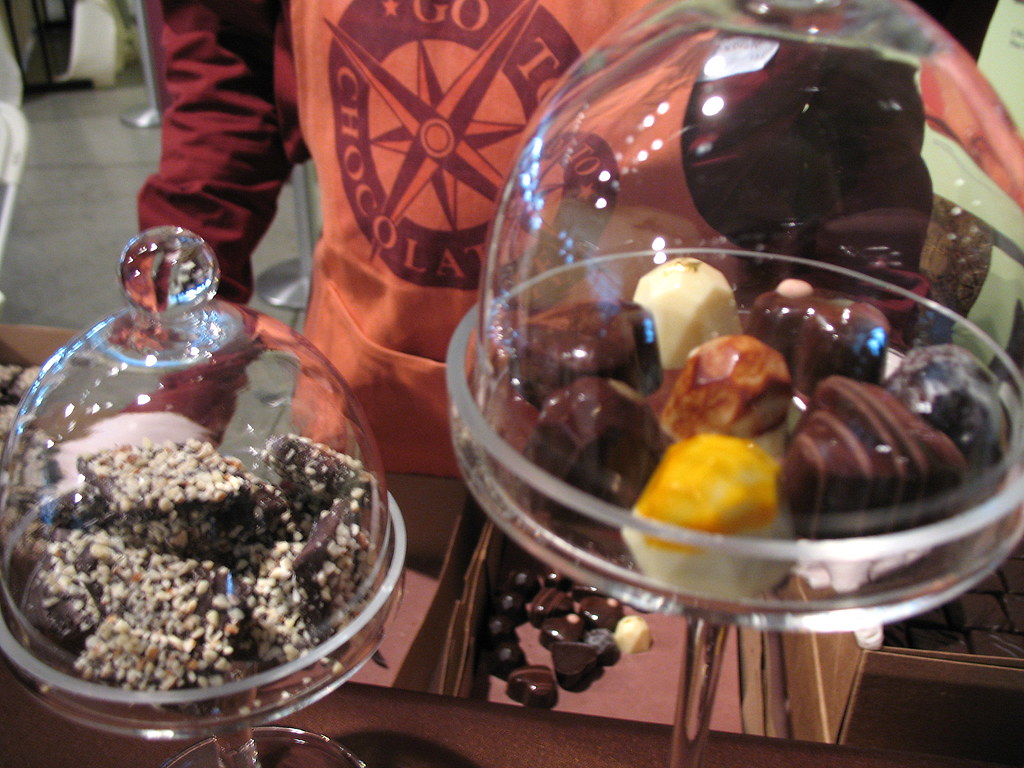 fruits of temptation from Go To Chocolate, one of the numerous chocolatiers on the floor

For me, this lesson in excess climaxed in a sweaty five minutes or so while I searched for water at the festival on Saturday. I had just stumbled onto the main floor after being interviewed for an internal Copia video, and for a short clip for Wine TV. The room was hot and teeming with bodies clustered around the various chocolate and wine vendors’ tables. The adrenaline from eating fifteen or so different chocolate morsels, truffles, ice creams, mousses, and whatevers, combined with the dehydration from having tasted fourteen different wines in the valley that morning before arriving to the show was catching up to me. I was parched. I didn’t have a glass. I’d put down my finished wine glass somewhere, and couldn’t find it. In fact, I couldn’t find anyone, but that wasn’t what bothered me. My eyes scanned the room, dizzily. Everywhere they focused, I’d see abandoned but half-filled wine glasses. Or empty ones, with dark raspberry stains on the insides that could only be created by tannins (and the occasional ones on the outside caused by lipstick). Where were these people who were done with their wine going to get some water? It was a secrecy. Water was reserved for VIPS. Frantic now, and hesitating every four paces to consider tasting that genmai chai and chile-flavored dark chocolate, my eyes finally settled upon what seemed at the time the purest, most fluid substance in the room: a white chocolate fountain centerpiece surrounded by dipping crudité. I took a strawberry from the table, bit down on it and sucked. I ran another one under the milky stream and lapped it up as it dribbled down my chin. So much for water. 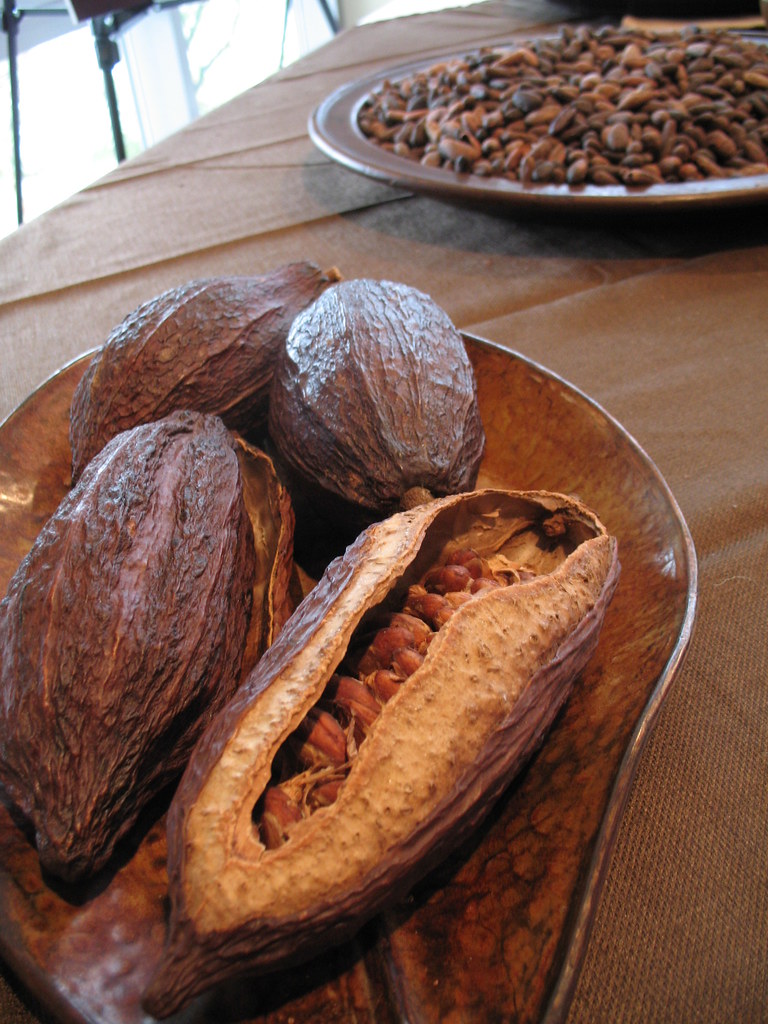 Georgia O’Keeffe might have done well with cacao beans

But I get ahead of things. (Random aside: can that last segment constitute a push for the continuation of Susie Bright’s Best American Erotica?) My weekend began with a delayed flight leaving New York in a snow shower; my mom and I arrived in Oakland with just enough time to make it to the walk-around tour of Charles Chocolates. Though groggy, our spirits lifted instantly while Chuck Siegel, founder and proprieter, shared his enthusiasm for all things chocolate — and natural. As we walked around the boutique facilities, Chuck lifted the covers of industrial-sized vats and mixers, crumbling the wall between the what you see and the what you get of consumer goods. “I don’t usually do this on regular tours,” he explained, passing around rubber gloves. “But since there’s a kid on this one, I will,” he nodded to Katie, Mark’s niece. We each took turns dipping our fingers into molten chocolate churning in a large machine. At its molten stage, Chuck explained, you can taste every note of the chocolate, whereas with solid chocolate, your mouth will never reach 100F, and therefore never allow this full expression of the chocolate on your tastebuds. I licked my finger ’til I got pure rubber. 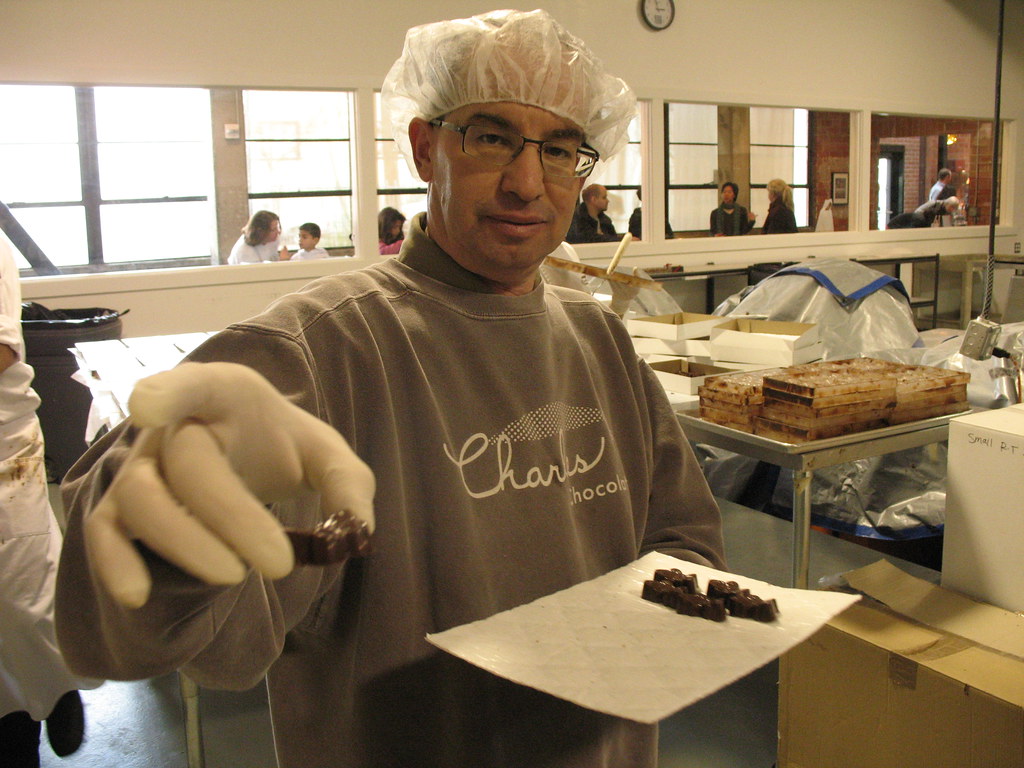 peanut butterflies are passed around by Chuck Siegel of Charles Chocolates 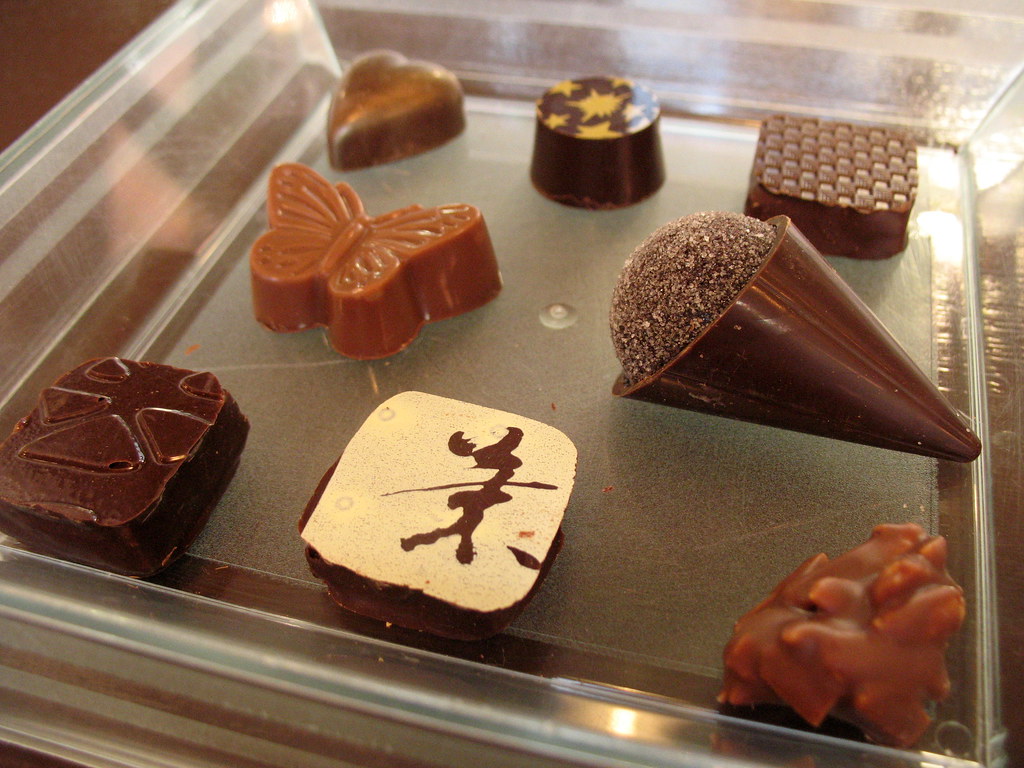 Over the course of the next hour, we continued to dip, nibble and peer our way through his signature confections, like a rich fleur de sel caramel. At the end of the tour, we sampled a menu of eight unique handmade chocolates. The peanut butterfly, made not with peanut butter but a more toasty, grainy and fluid natural peanut paste, was a certain improvement on an old classic. Though a jasmine tea-infused ganache audibly knocked my socks off (and threw me a momentary reverie of Taiwanese sweetened milk tea), my favorite treat was probably the raspberry fruit jelly chocolate “ice cream cone”: a thin, cone-shaped chocolate shell filled with raspberry ganache and plugged up with a jammy raspberry jelly drop. All of it was natural, the jelly made of fruit, sugar and pectin. 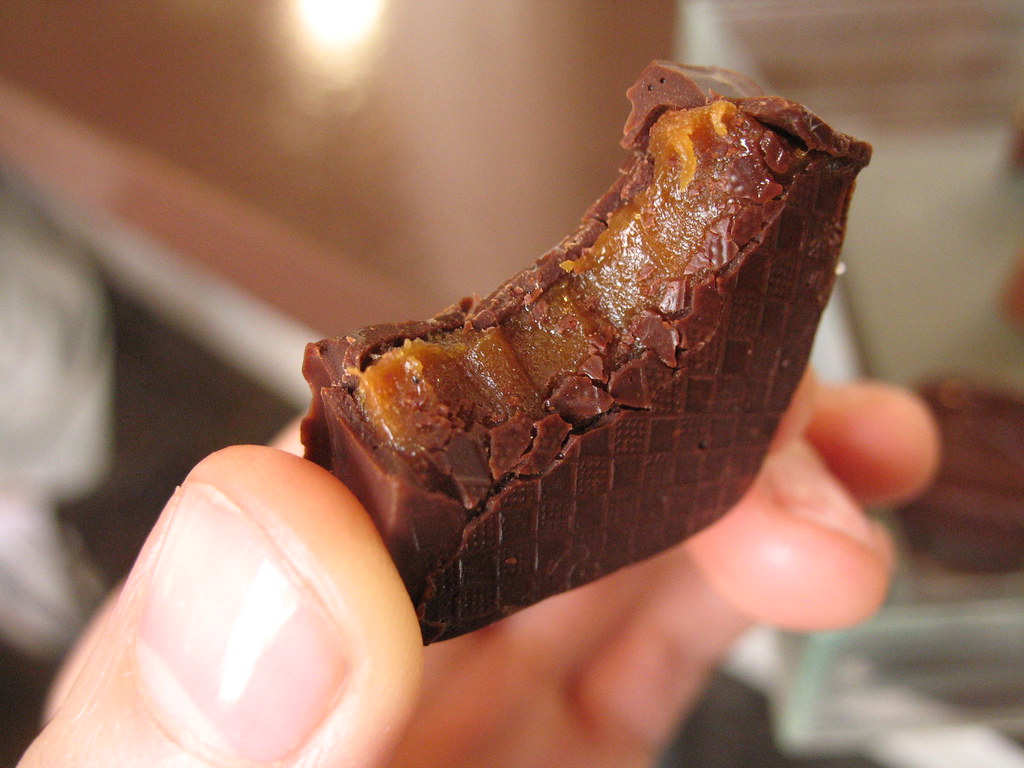 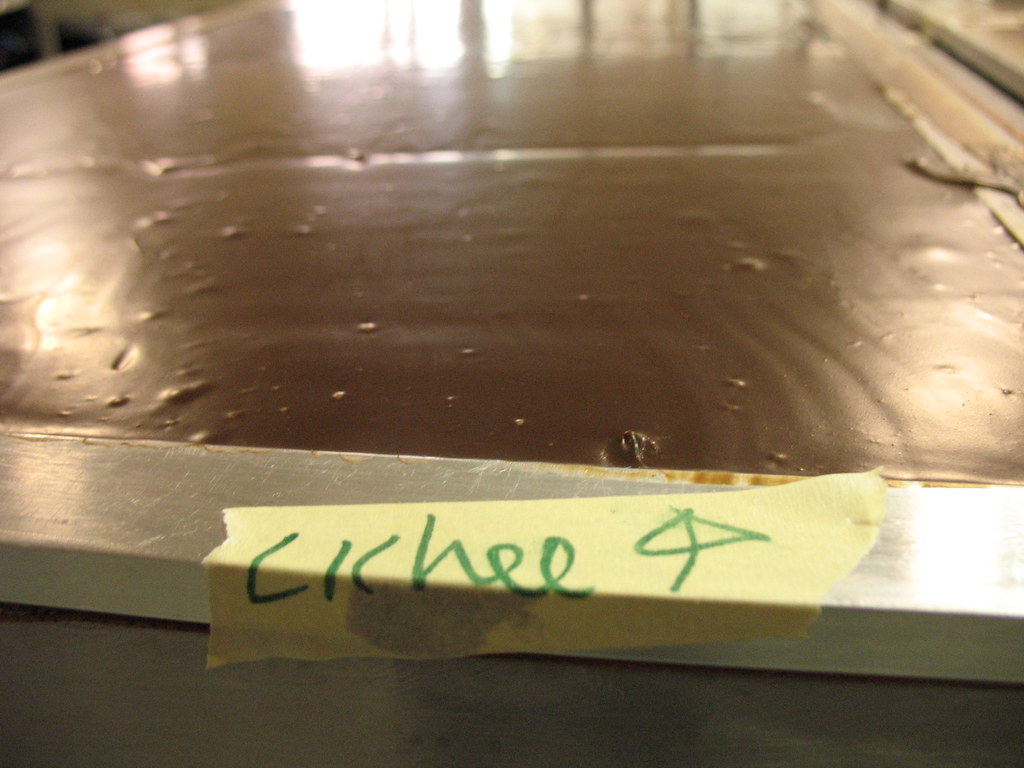 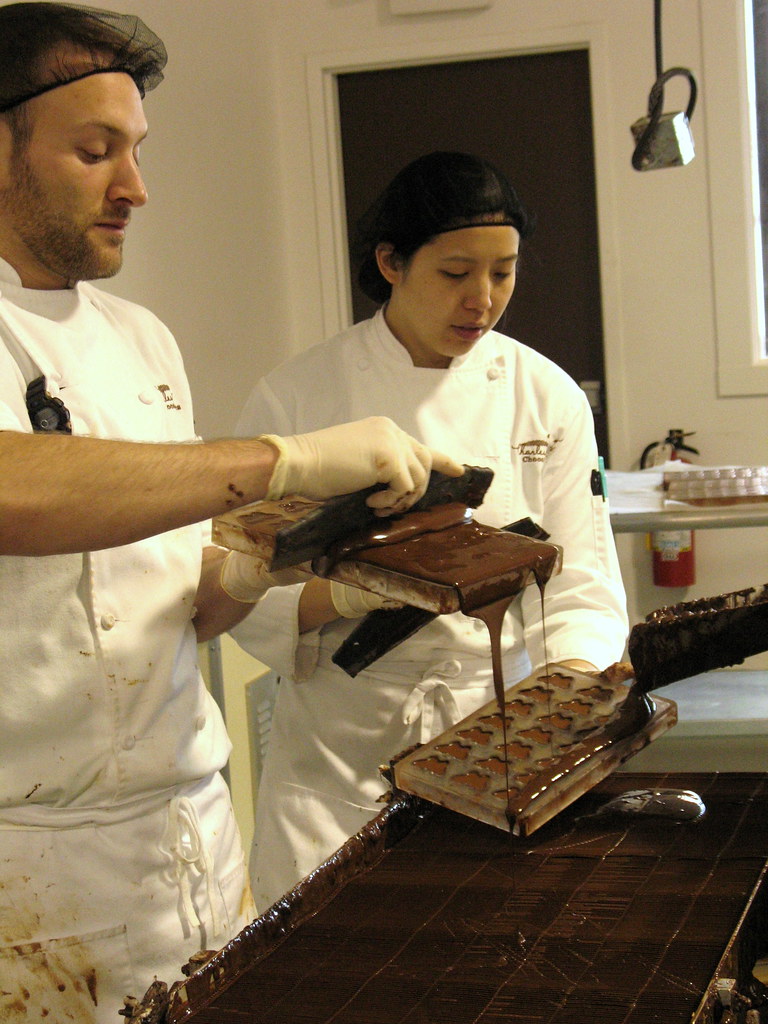 After the tour, my mom and I bid farewell to Chuck and company for the day and sped off for San Francisco. There, we ate a belated and very necessary late, late lunch in Chinatown of shrimp wonton soup and congee at a noodle shop. The night was filled out by an exceptional dinner (which I’ll get to in a separate post), followed by an hour-long drive to Napa, where my hotel room was equipped with a surprise care package of chocolates, chocolate books and other sweet treats thanks to my gracious host, Copia. 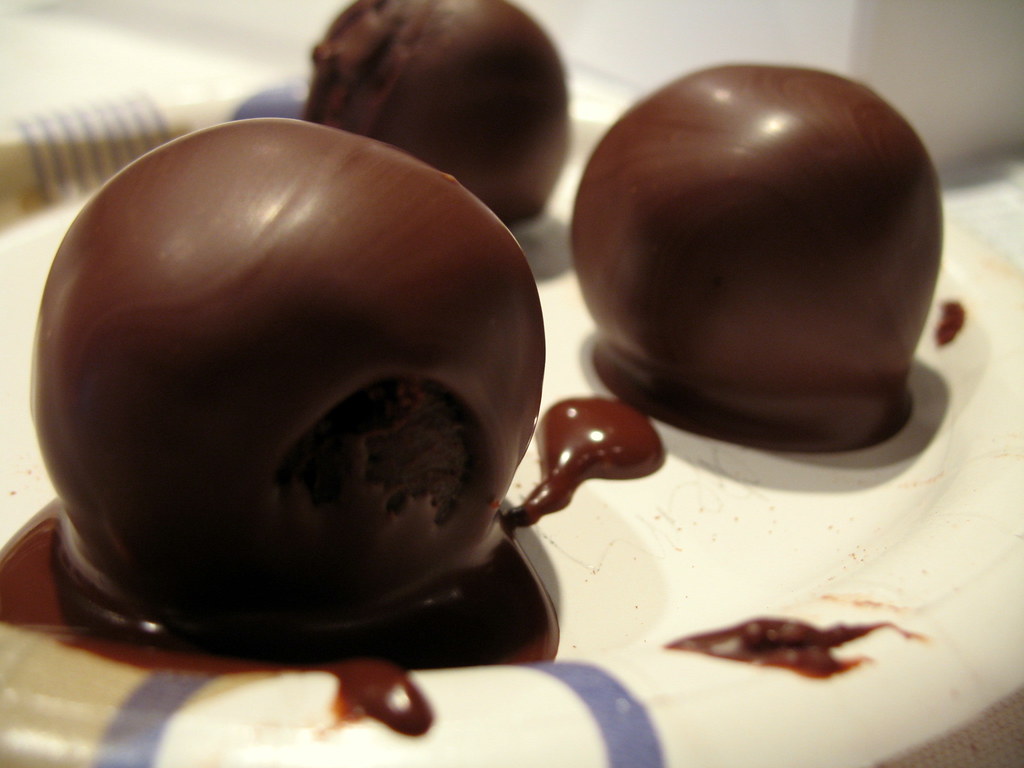 The next afternoon, after the whirlwind that was Saturday’s Death by Chocolate festival, I attended a class on truffle-making. Through the guidance of a friendly pastry chef, we learned the basics of truffles, which were just that: basic. Nothing more than an emulsion of chocolate and cream with optional flavorings, rolled in balls and dipped in more chocolate or flavorings, a dozen were produced by each member of the class to take home. I also learned why a truffle takes its name from the prized rare fungus: when irregularly shaped and dusted with chocolate powder, it more or less resembles a moldy black truffle. 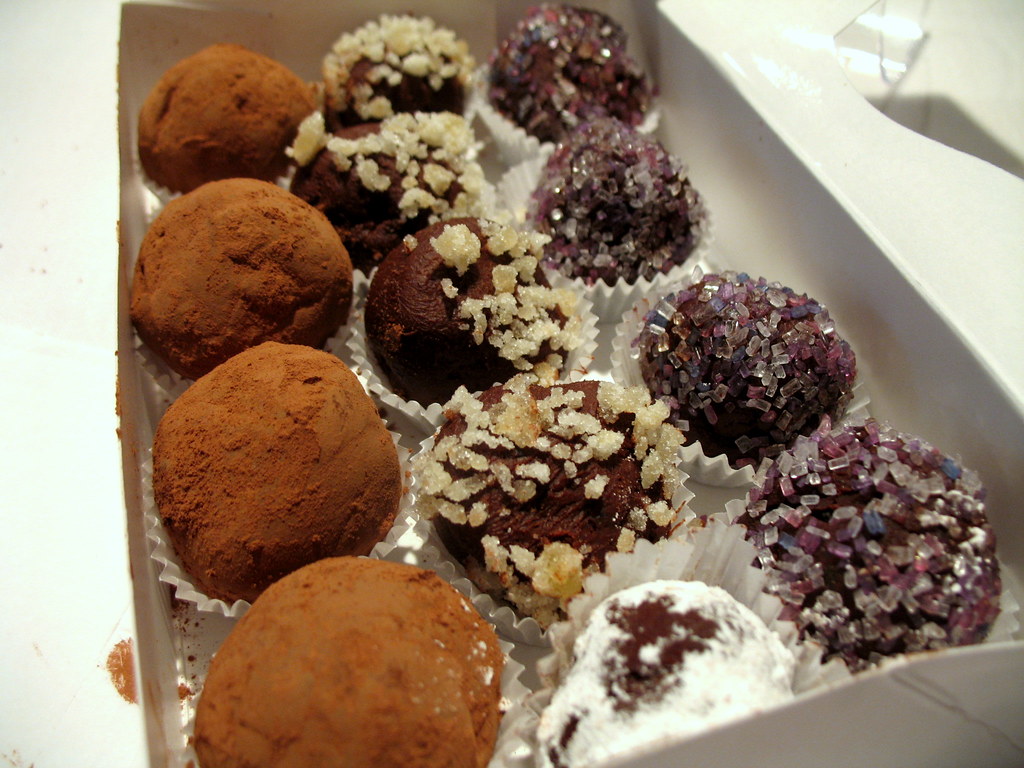 This box, as well as my mom’s, were donated to my co-workers the next Monday at work. I survived the chocolate weekend, perhaps. But that doesn’t mean I haven’t suffered. I can say from experience that the threat of chocolate is real; and yet tempting all the same. I’m crossing my fingers and hoping that now, at least for a while, I’ll be immune to the powers (and calories) that it holds.