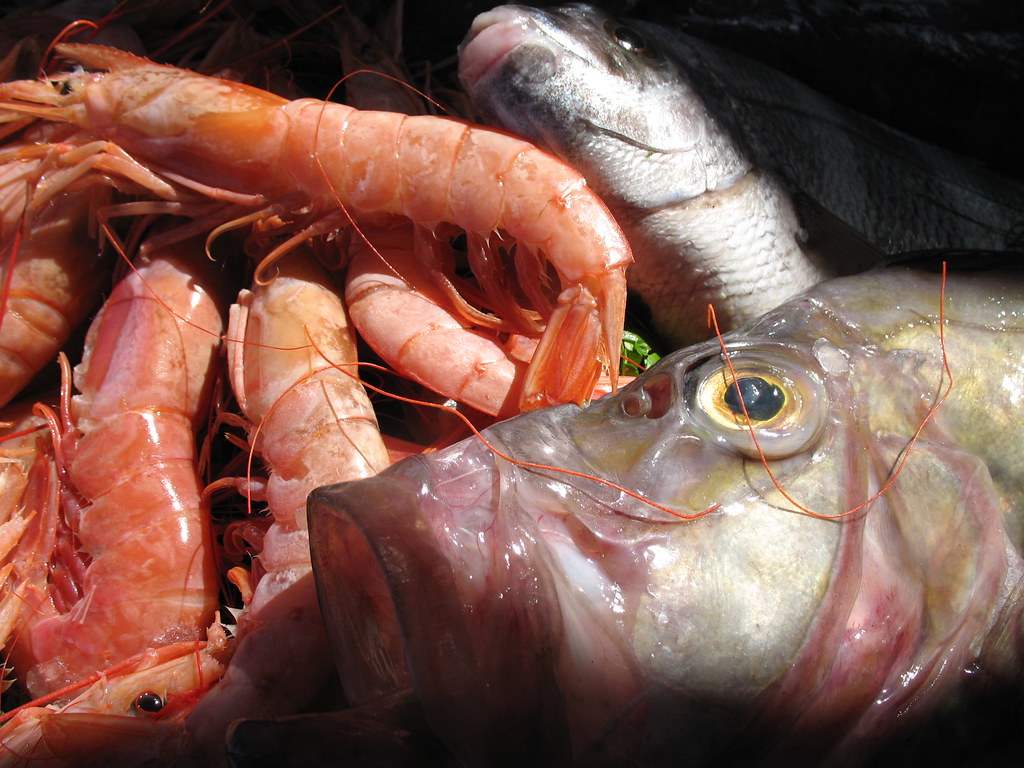 Leaving Marrakesh, Jordan and I boarded a small bus with ten other travelers from around the world. The destination? The dunes of Erg Chebbi, near the border of Algeria. On the way, we’d be passing through the Atlas Mountains, notably Ouarzazate, with its scenic kasbahs often used for location film shoots. I’d been informed that Berber cuisines of the mountain and desert regions we were crossing were milder and more simple than the rest of Moroccan food. Well, I should tell you that the bar for flavor is quite high in these parts, as evidenced in this savory Berber omelette. 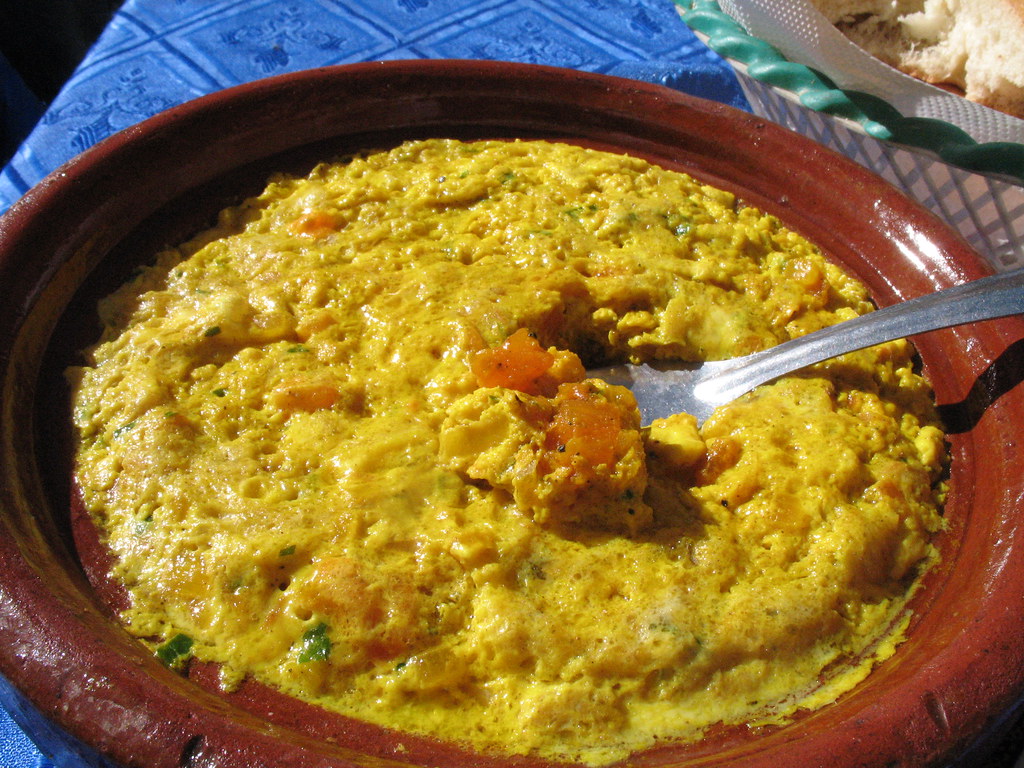 A Berber omelette, sizzling hot, moist and infused with spices

Something in between a frittata and steamed eggs, these scrambled eggs were cooked in a tajine with tomatoes, onion, cilantro and a hefty dose of cumin. Note to self: Do try this at home.We ate humble fare on the road to the desert, more vegetable couscous — which got better each time I tried it — and more tajine chicken. Perhaps I ate like a peasant the entire trip, but to me there seemed to be less distinction between “peasant food” and upper-class food in Morocco, probably due to the fact that people rarely eat out but for tourists. 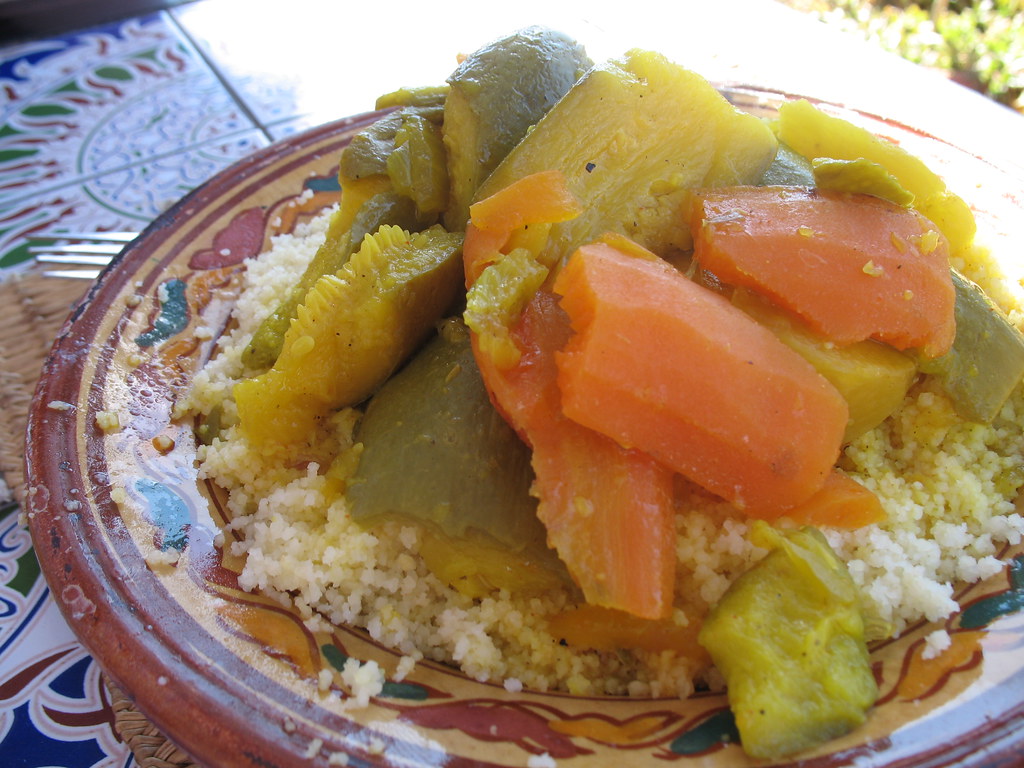 But our final meal of the trek, spent huddled over little round tables on a wool blanket under the stars in the desert, was the nomadic crème de la crème. Our Berber desert guides had cooked for us a steaming pot of stewed chicken with potatoes and carrots. We were given bread to eat with and no utensils, plates or napkins. But by the time they had served us, after 8pm on a long day of traveling, camel hiking and climbing the dunes at night, we were starved. There is something soothingly barbaric about the interaction of one’s hands pulling meat straight from an animal’s bones. And there’s also a human bond that comes with sharing a big pot of food with others, all eating with one’s hands. Well, afterward we were pretty happy that someone had brought wet tissues. But while we ate, shared, and talked about ourselves, those concerns had all been forgotten. I forgot to mention that our group was diverse: Two were from Barcelona, two were from Sydney, two were from Montreal, one was from Japan, one was from Seoul, one from London and one from Italy. And two from New York (me and Jordan). 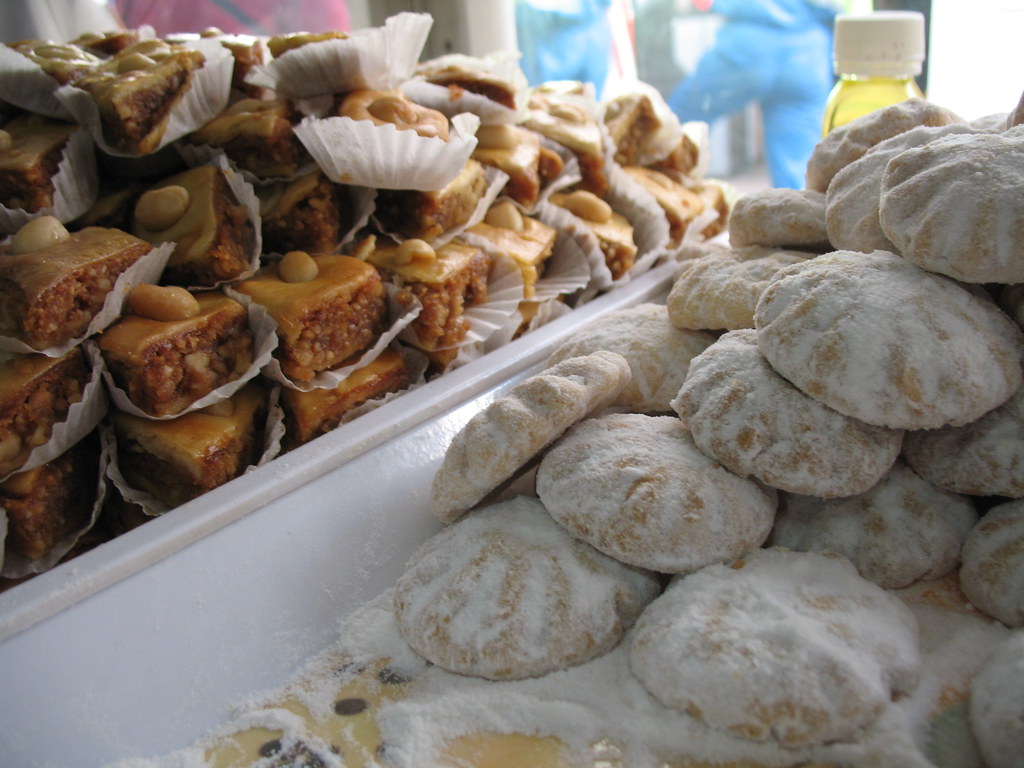 clusters of the French pastry diaspora

Okay, time out from the more traditional Moroccan fare and let’s talk about their pastries. Never have I tasted such good French pastries than from the many little bakeries throughout Morocco. And so inexpensive — three delicate morsels cost me 9 dirhams when weighed together ($1.15). I don’t eat pastries often in New York, as I can’t find it worth the exorbitant price and calorie count. But trust me, I ate plenty in Morocco. Many tasted of freshly roasted peanut, toasted coconut and sesame, like the one pictured below right, a sort of nutty paste rolled into a delicate truffle-like ball. 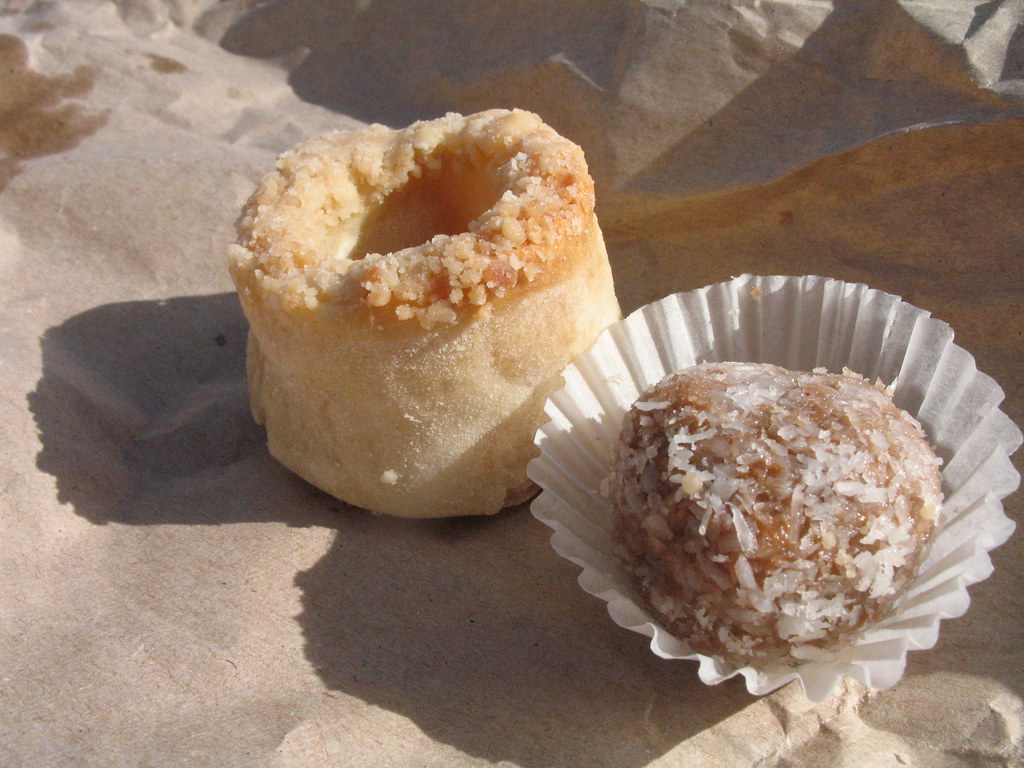 After our return to Marrakesh, we put on our backpacks again and headed West — for the coast. On our way to Essaouira (pronounced “essa-weera”), we passed several groves that looked to be raising goats. A word on one of the signs caught my eye: “H’uile d’Argan.” Argan oil! The latest and greatest thing to happen to skin and salads that puts olive oil to shame. (The New York Times proclaimed it “liquid gold.”) What am I talking about? Well, you should probably click on that article to get the full scope. Random odd fact, though: Goats’ stomachs essentially process the hard shells of the argan trees’ nuts before they are pressed into oil. Traditionally, workers must extract the nuts from the goats’ feces. One of those things that makes you go, now who’d ever think of that first?! 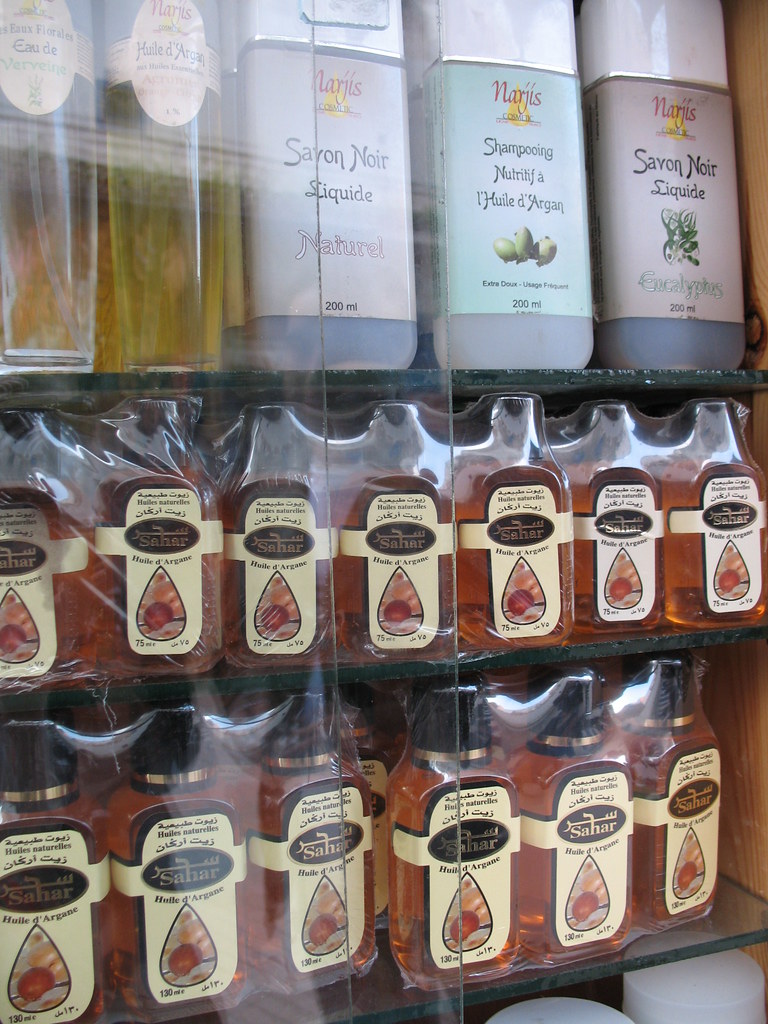 the oil is now produced almost solely by women-run cooperatives

In Essaouaria, I bargained hard and scored a little travel-sized bottle of this miracle oil along with a bar of soap for 40 dirhams ($5.20). I intend to use it solely for eating, of course. The fragrance alone is startling. Indeed the color of gold, in between honey and amber, the oil smells potently nutty, almost like Asian sesame oil. But a little bit fruity and floral, as well. I dipped a tiny drop of it on my bread, and am now a believer.But let’s get to the seafood. Because that’s the real reason any tourist really goes to Essaouira. Yes, there’s a nice medieval fort there, and there’s a scenic medina or town square. But the true business of the city is and has always lied in its waters. 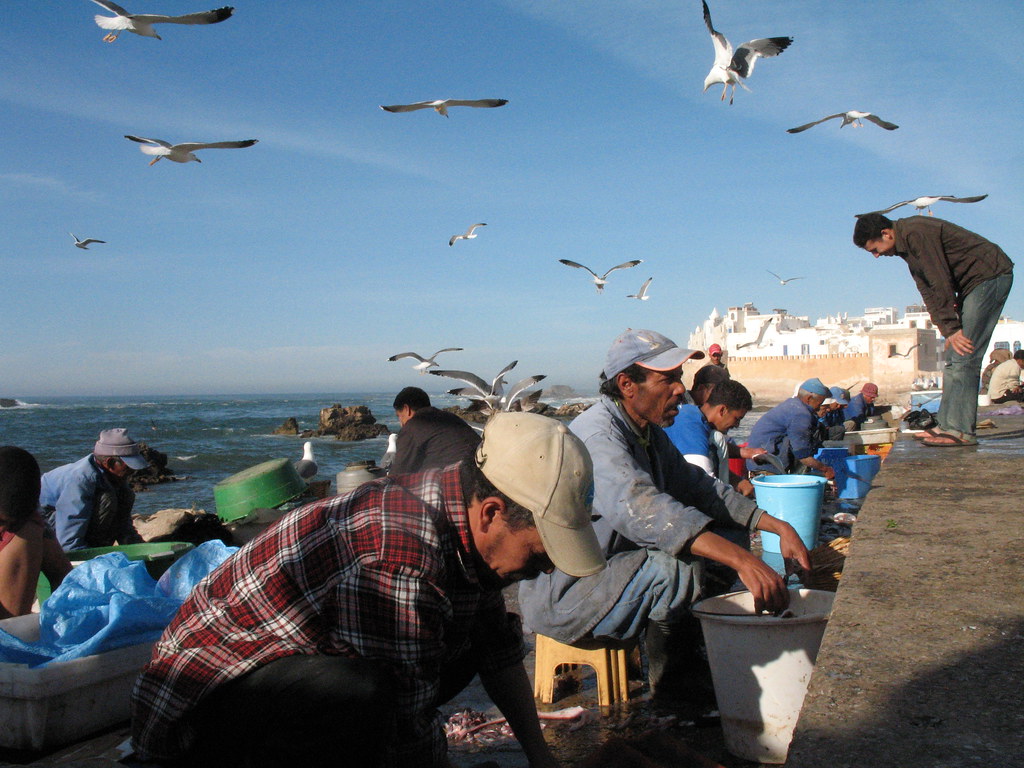 cleaning (and bargaining for) the latest catch on the wharf

A fresh seafood feast was grilled before our eyes at a ramshackle grill stand along the shore. With long communal tables, the experience was much like the coastal version of the Djemaa el Fna food stands, only it was intensely bright under the hot afternoon sun, and it was all seafood. 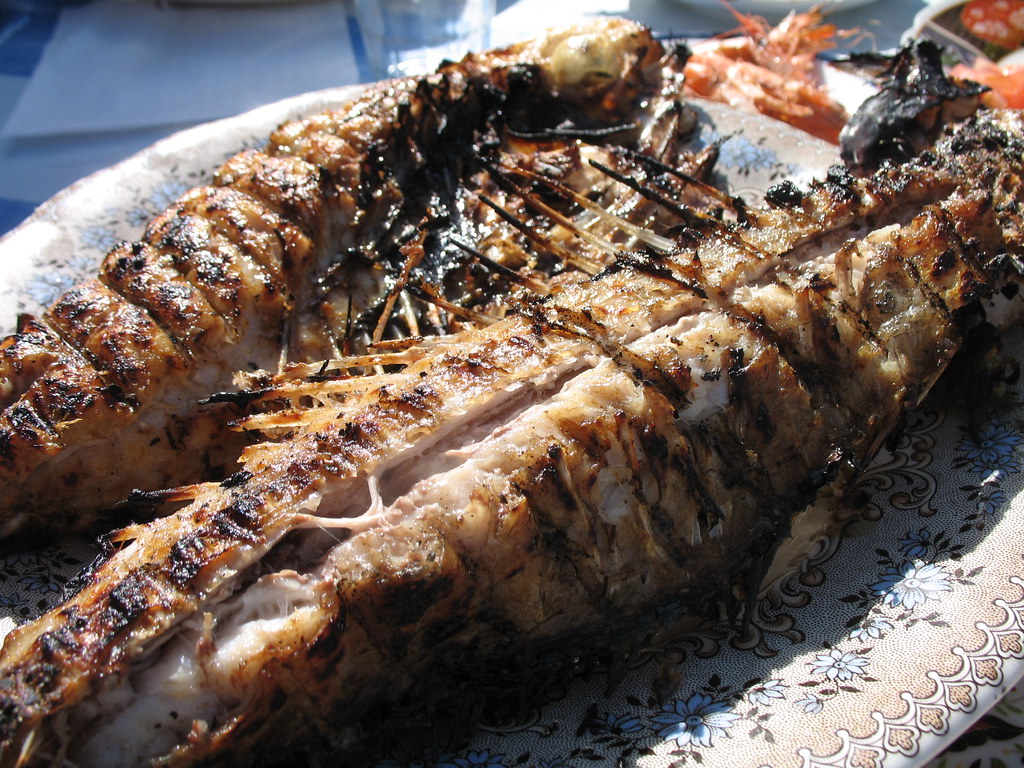 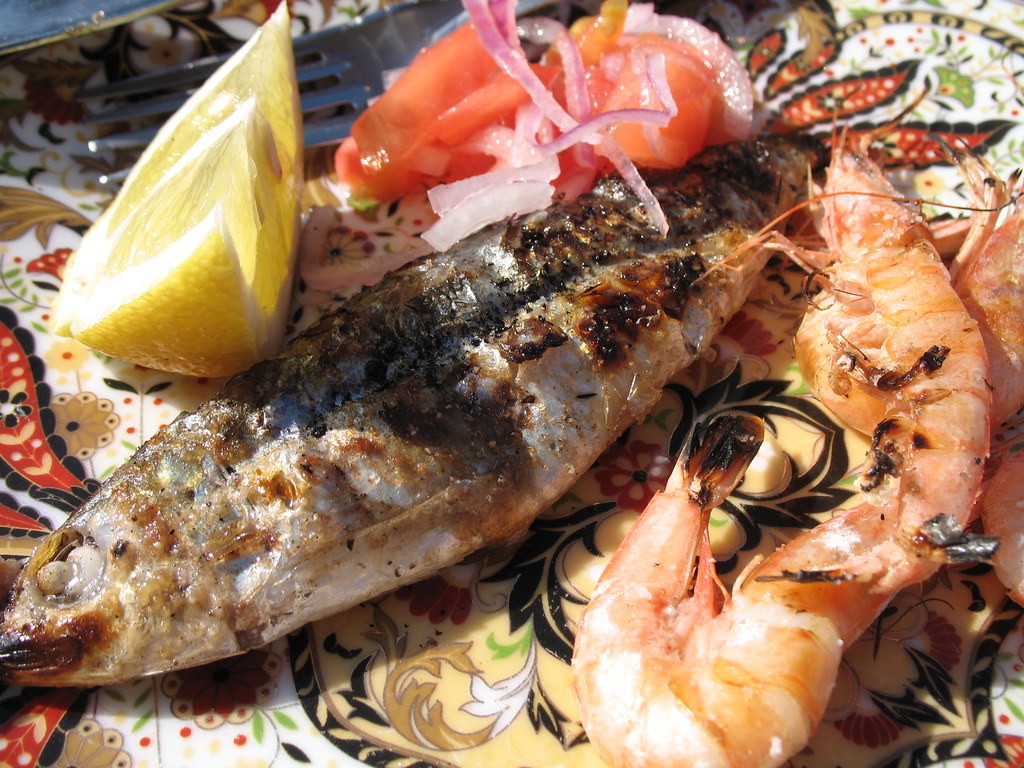 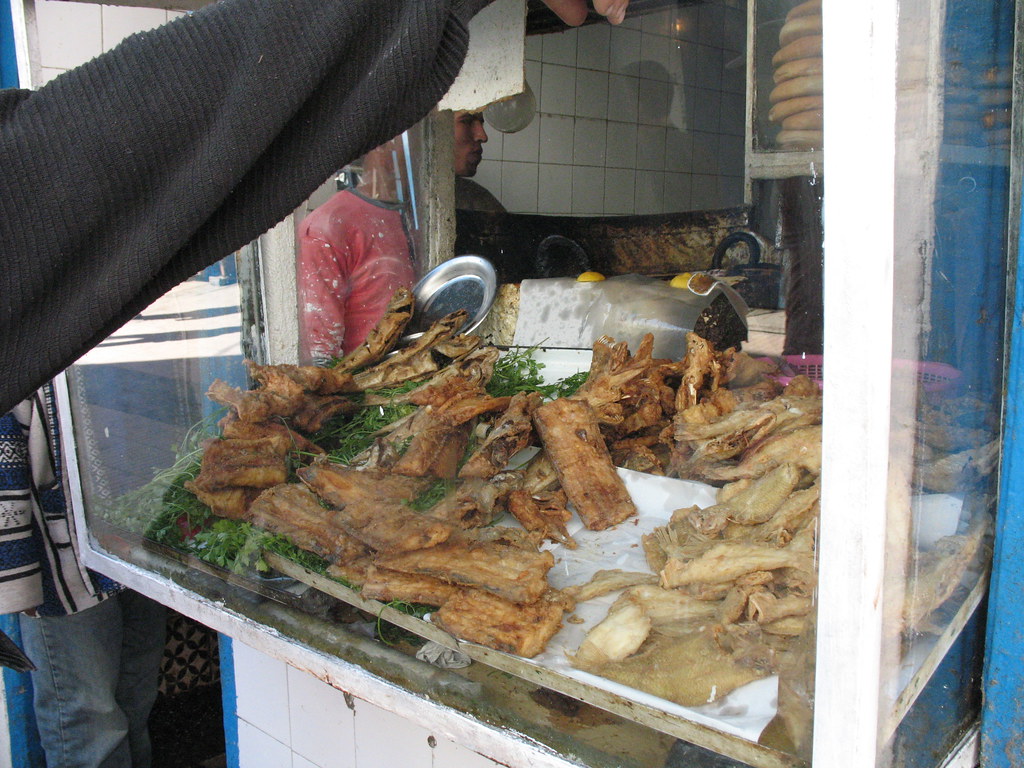 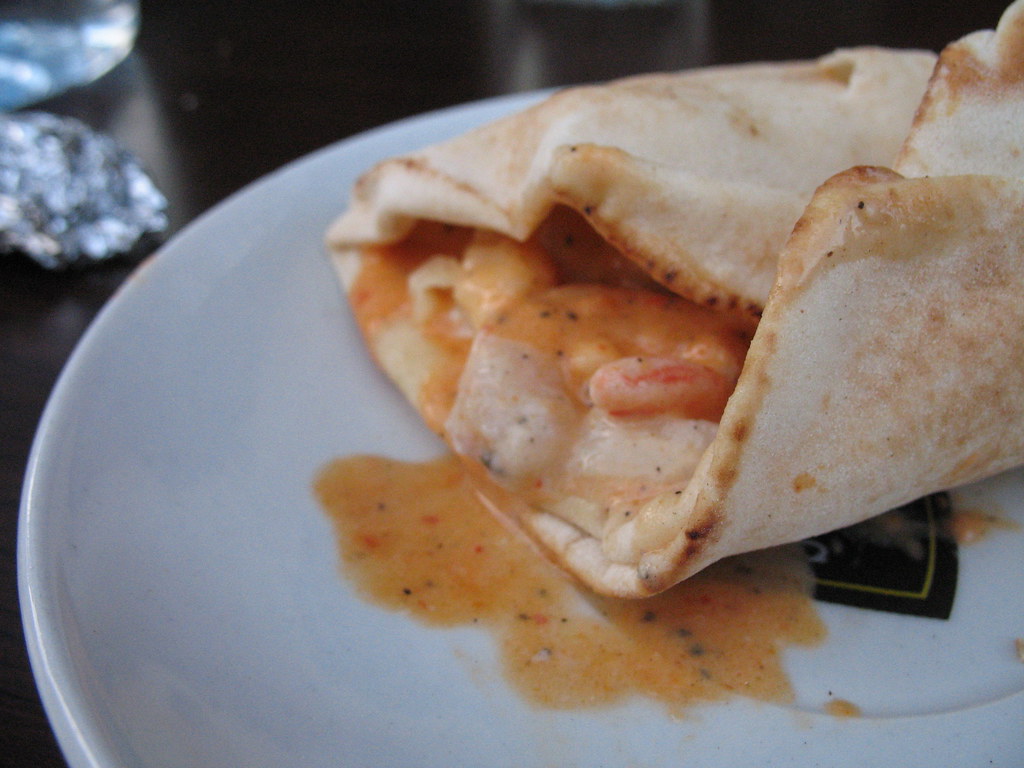 a seafood panini at an Essaouira medina restaurant

After stuffing ourselves with our fair share of omega-3 fatty acids during this lunch, but dealing with the then-overwhelming frustration of having to bargain heavily for a fair price, Jordan and I relinquished our next meal to the hospitality of the guest house in which we were staying. What followed was by far the best meal of our trip. We stayed at the Dar Afram guest house, a small riad with a resident female cook/housekeeper. She prepared for ourselves and several other guests a five-course meal beginning with a creamy vegetable soup, then a cold salad and a warm eggplant dip which I do not dare call Baba Ghanoush simply because it’s never come close to being that good, and for the main course, an incredible tajine with succulent, juicy white fish fillets cooked in tomatoes, peppers, potatoes, herbs and spices. Just the potatoes alone, seeped in the dish’s flavors, could compete for one of the best things I’ve tasted. Because I didn’t want to spoil the memory of it, I decided against taking photos of the meal — it was dark in the dining room beside. 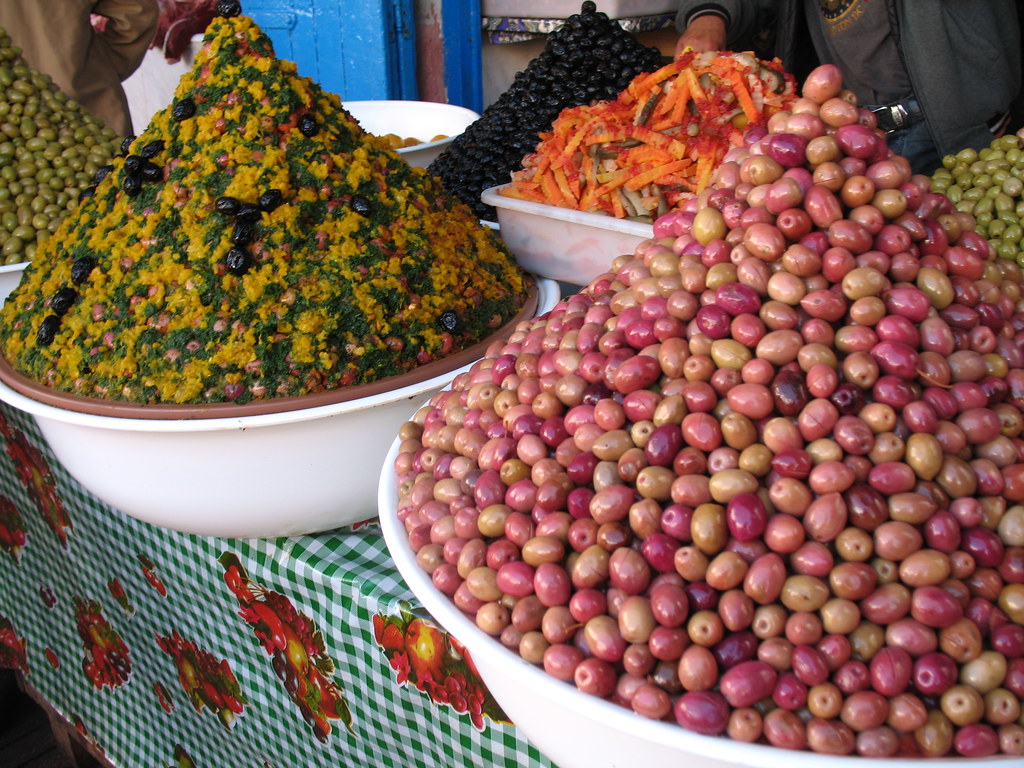 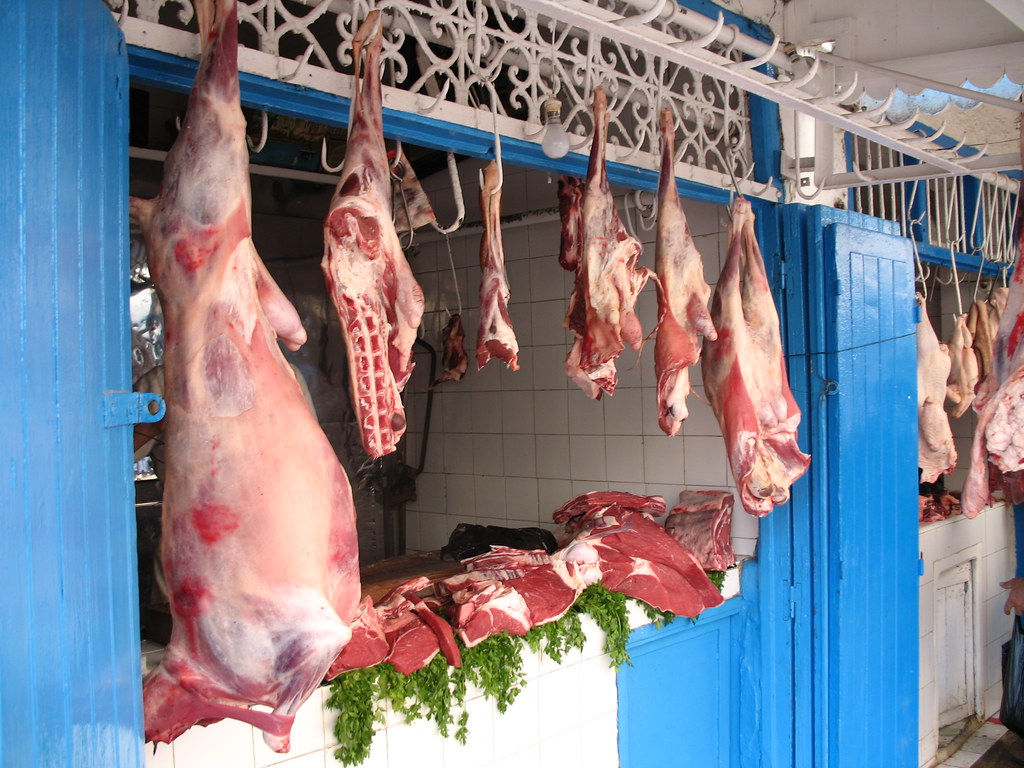 and the all-too-common butcher stand

You might be asking, after the last paragraph’s praise, whether I’m a convert to eating out once and for all. But tasting a meal as mind-blowing as this — once, even — is enough to fuel perhaps another whole year of not eating out as I see it. I’m already dreaming up versions of seafood tajines (or skillet recipe, or even foil wrap) inspired by the experience. After all, that’s what traveling is all about, when you’re a food fanatic at least.