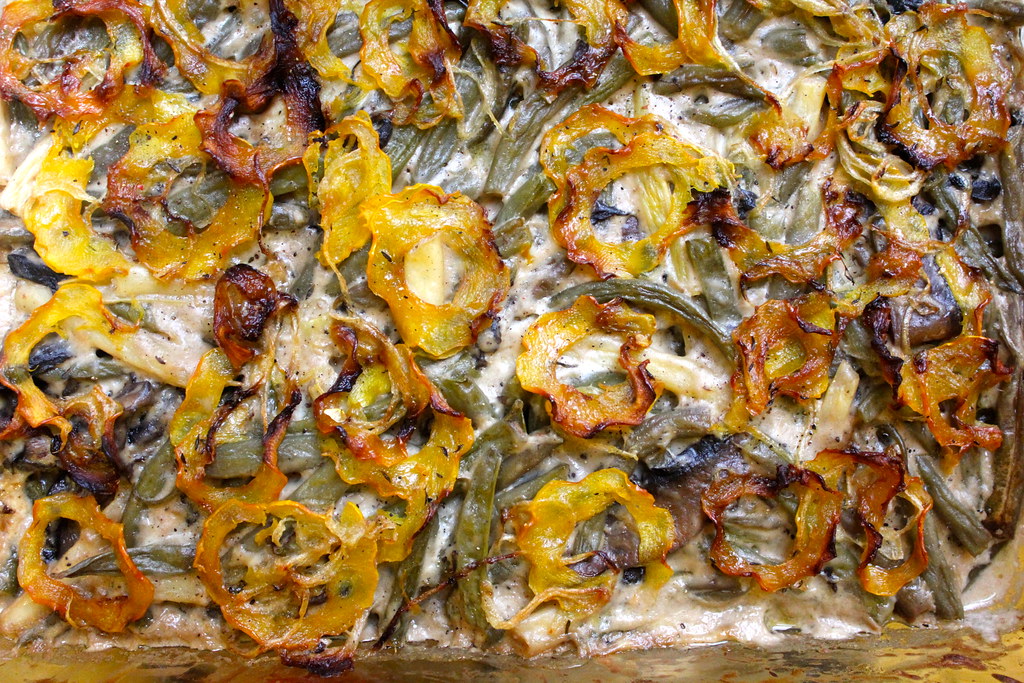 Years ago, none of my friends would have pegged me to make green bean casserole for a potluck. I didn’t really know much about casseroles growing up, didn’t see them except for lasagna. But now, three years in a row, I’ve been bringing my own iterations of green bean casserole to my friend’s annual pre-Thanksgiving party. It began when my editor at the environmental site Grist asked me to remake a few Thanksgiving recipes traditionally thrown together from canned food using fresh, whole ingredients. From this experiment spurred many others, as I tried to get to know the dish better, and make it better-tasting to myself and my friends.


I’m still trying to reinvent, improve, and perfect it, and I hope to continue doing so in different ways each year. There’s no such thing as perfection with a dish. You can be satisfied with it one moment, then determine there’s things you’d like to change, or see be done better, or that you just feel differently about, as time goes on. That’s my relationship with green bean casserole, through these short few years. I may one day decide to make it the classic way, with canned cream of mushroom soup. But for now, the version made this year for Aaron’s turkey day potluck has a showering of sliced squashes and onions on top. 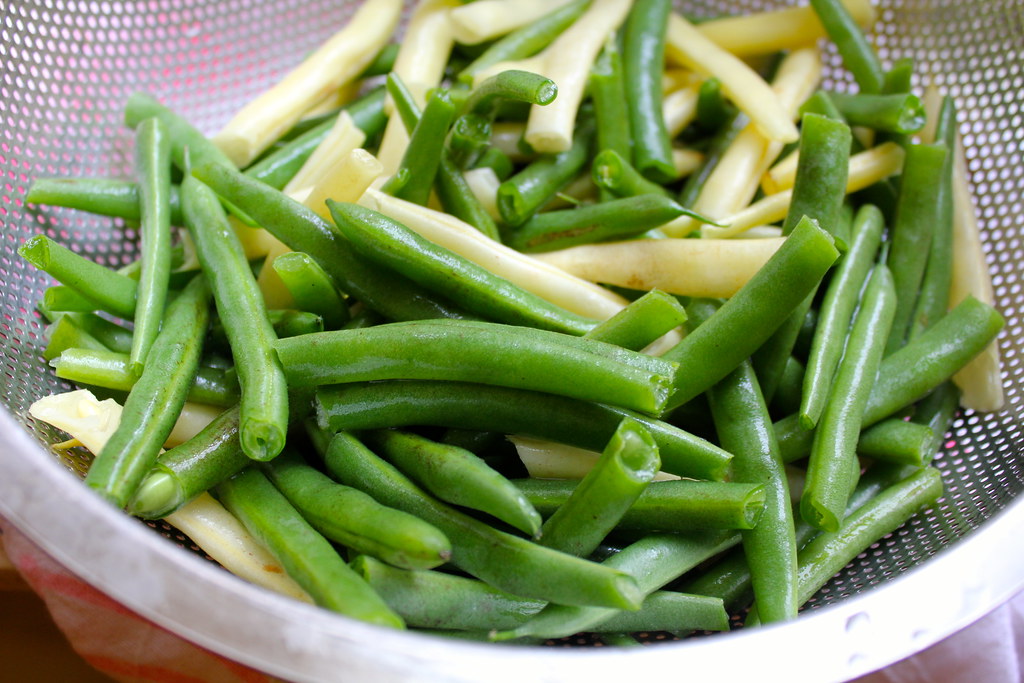 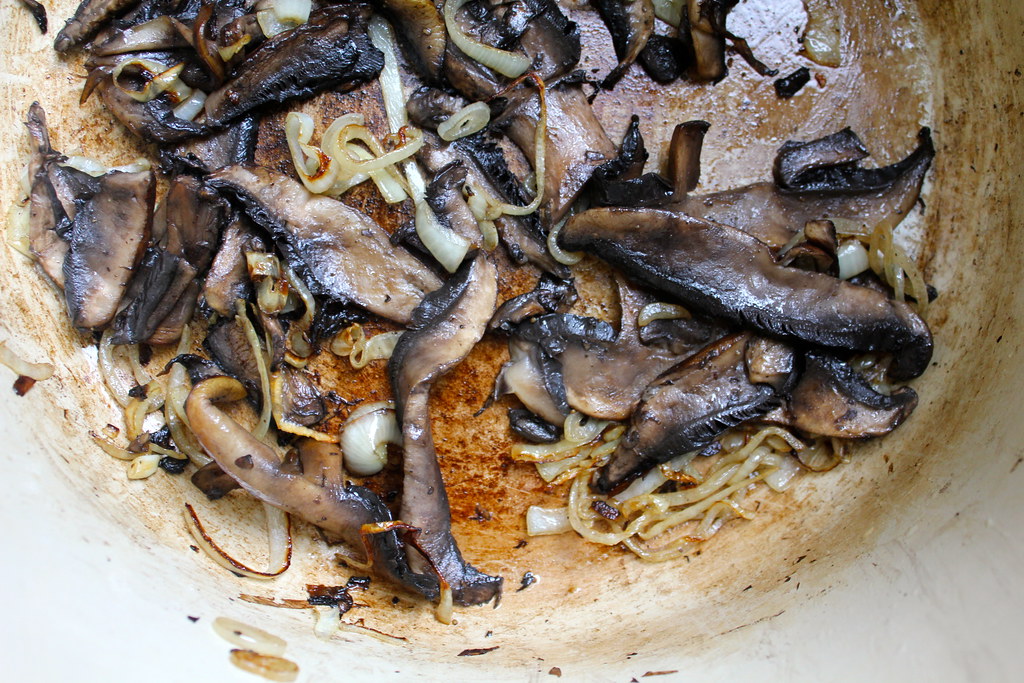 portobello mushroom is sliced thinly and browned with onions and butter

Starting out with the basics, we’ve got fresh green and yellow wax beans, and a meaty portobello mushroom that was sliced and sizzled with some onion. These ‘shrooms will add depth to the creamy white sauce that’s stirred with the whole shebang before baking. 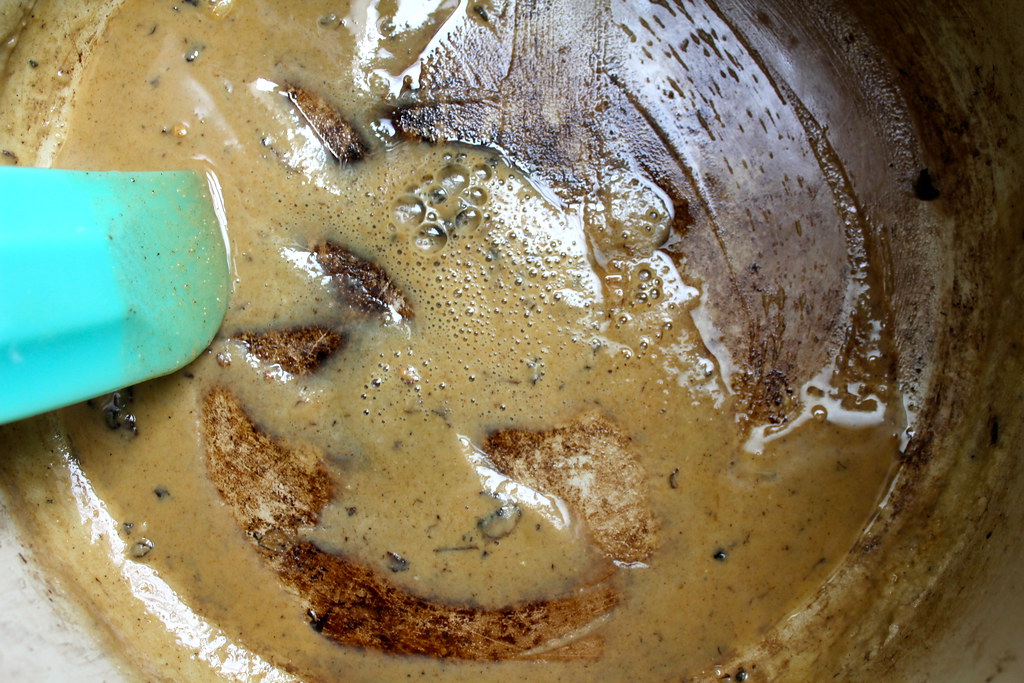 stirring a simple roux of flour and butter


Instead of canned soup, it’s a classic bechamel from butter stirred with flour to create a golden roux. This part can be tricky for home cooks, but have no fear–a botched start can be saved by lots of stirring. For best results, warm the milk in a separate pot while you’re browning the flour with butter in another. Stir the flour with the bubbling butter until you find its color darkening (to various lengths, depending on preference). It’ll develop a deeper, toastier flavor. I also recommend using the same pot for this that the mushrooms were just browned in, to capture their tasty, browned bits. 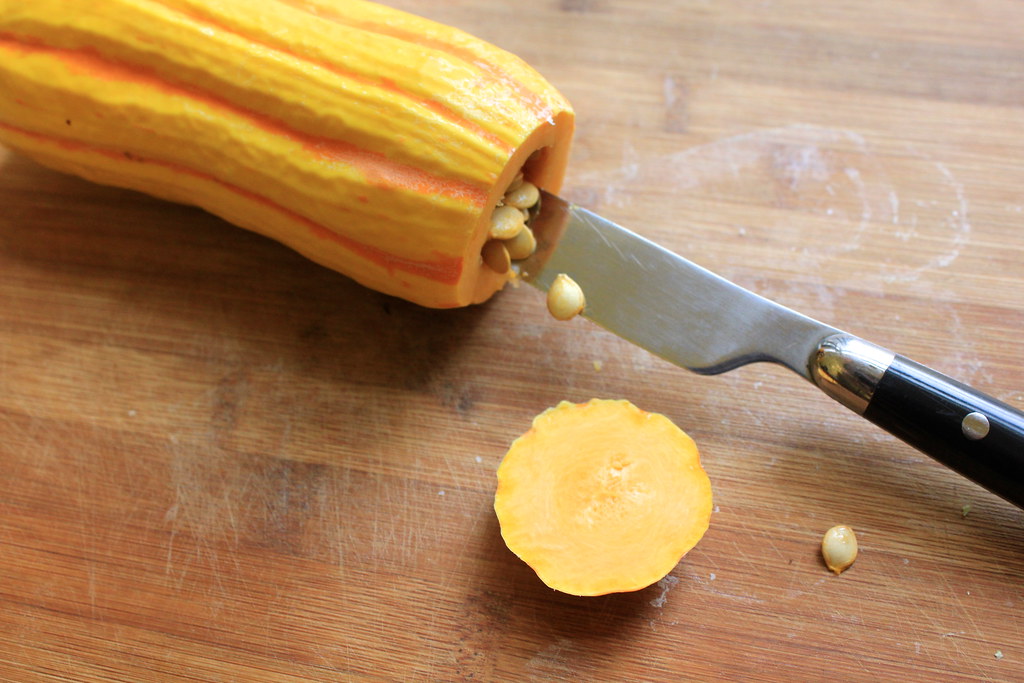 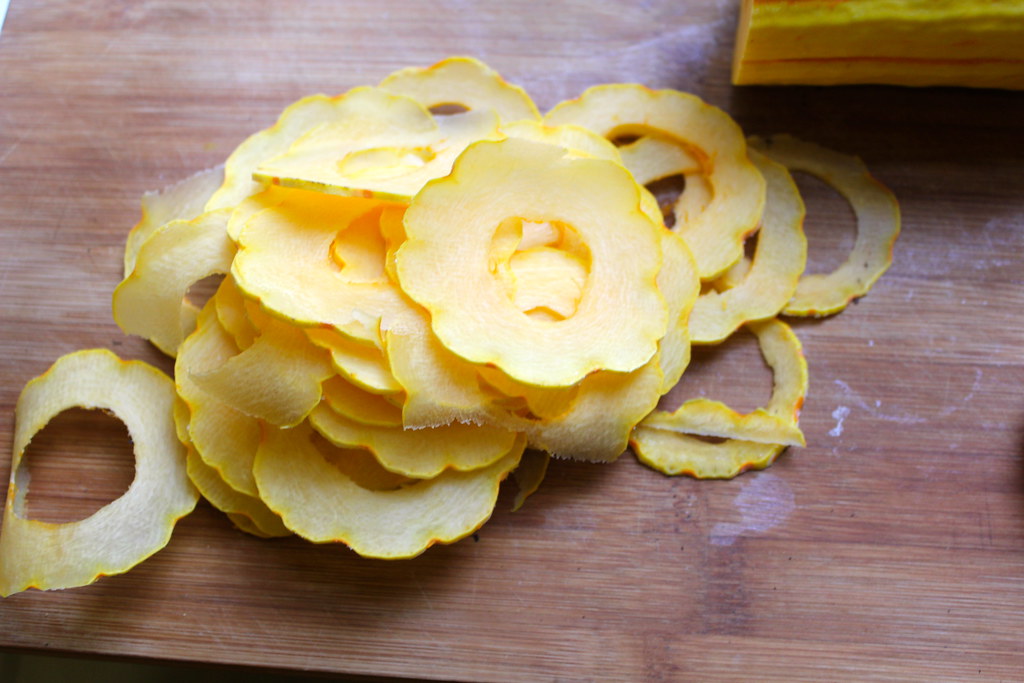 scraping the seeds out of the squash before slicing thinly

For a crispy onion topping, I looked to fresh, sliced onions to scatter atop the casserole (instead of store-bought “cocktail onions”) the first time around. This time, I added another layer: blossom-shaped shavings of a delicata squash. This vibrant seasonal gourd might look pretty at your table as is, but sliced thinly and baked until crisp around the edges on a casserole, it’ll look and taste great as well. These squashes can run pretty small, so mine was just narrow and cylindrical enough to run across a mandoline for uniform slivers. I find that a butter knife works great to excavate the seed pocket before doing so. 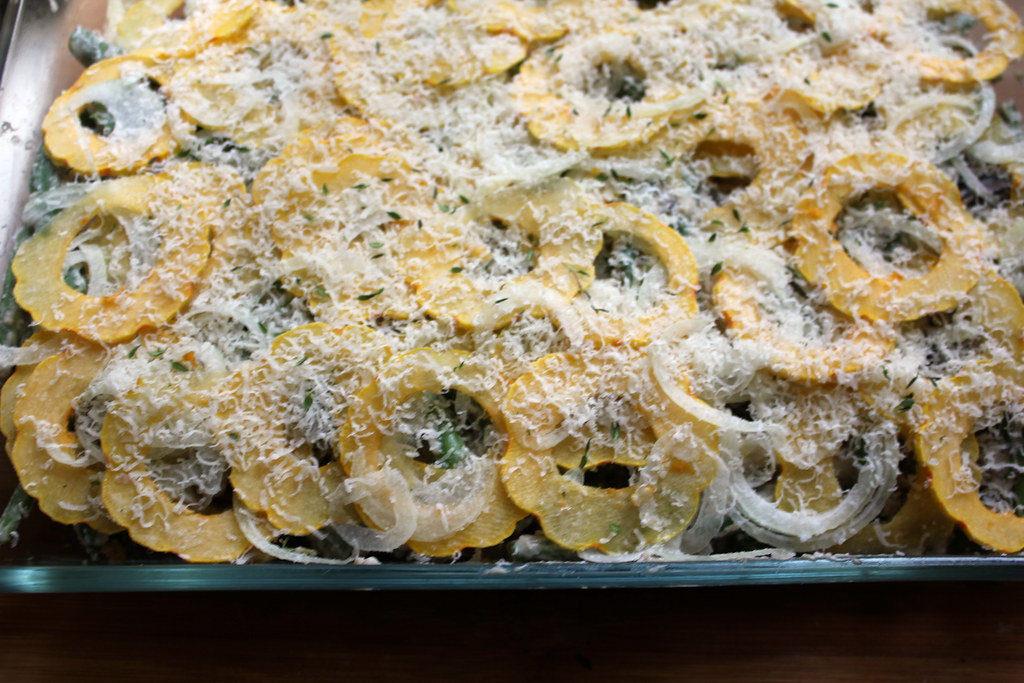 All told, there were a few new things about this green bean casserole that I’d never done before. The bechamel was made thicker and creamier to begin with; there were colorful squashes on top; and, to encourage their crisping, a light shower of grated grana padano cheese covered them as a finishing touch. It only gets better from here on, I’m convinced. But let me know how you’ve learned to improve green bean casserole, and we’ll keep going at it.

Slice half the onion, and reserve the rest. Heat 1 tablespoon of the butter in a wide pan or pot, such as a cast-iron pan, over high heat. Add the mushrooms along with a pinch of salt and pepper. Cook, stirring, until just beginning to brown slightly, about 2 minutes. Add the onion slices and another pinch of salt and pepper. Decrease heat to medium or medium-low and cook, stirring, until the onions are are just translucent, about 3-4 minutes. Remove the vegetables from the pan and set aside.

Preheat oven to 350 degrees. Slice the remaining onion half very thinly (by hand or with the help of a mandoline slicer). Cut off one end of the delicata squash. Poke into its seed pocket with a butter knife and scoop out the seeds and stringy pulp to about half its length. Slice the squash along its length very thinly (preferably with the help of a mandoline slicer). Toss the sliced onion and squash with the olive oil, and a pinch of salt and pepper.

Stir the green beans into the bechamel sauce mixture. Taste, and add salt and pepper as desired. Pour into a rectangular casserole dish and spread evenly. Scatter the oiled onion and squash rings evenly across the top of the bean mixture. Sprinkle the grated cheese on top. Bake for about 30 minutes, or until the vegetables sliced on top appear golden and sizzling. Let cool for at least 5 minutes before serving.

Six brownie points: Green bean casserole is a rich vegetable side. But making it from scratch relieves it from heavily processed, sodium-rich foods like canned cream of soup. There’s also plenty of beans for Vitamin C, fiber and potassium, and the topping of squash–albeit used sparsely–not only adds color but Vitamin A. Cholesterol from that butter, milk and cheese comes along with calcium. You can get a pretty good, hearty meal from its leftovers alone.

Seven maple leaves: You can tell why this dish is appropriate for fall–I was still able to find green beans this at the local farmers market, along with onions, a squash, milk, butter and a mushroom to comprise the main ingredients. But they weren’t exactly the freshest, crispiest beans, so an alternate use like baking in a casserole was a great use for their past-prime state–a fallback plan, you could say.