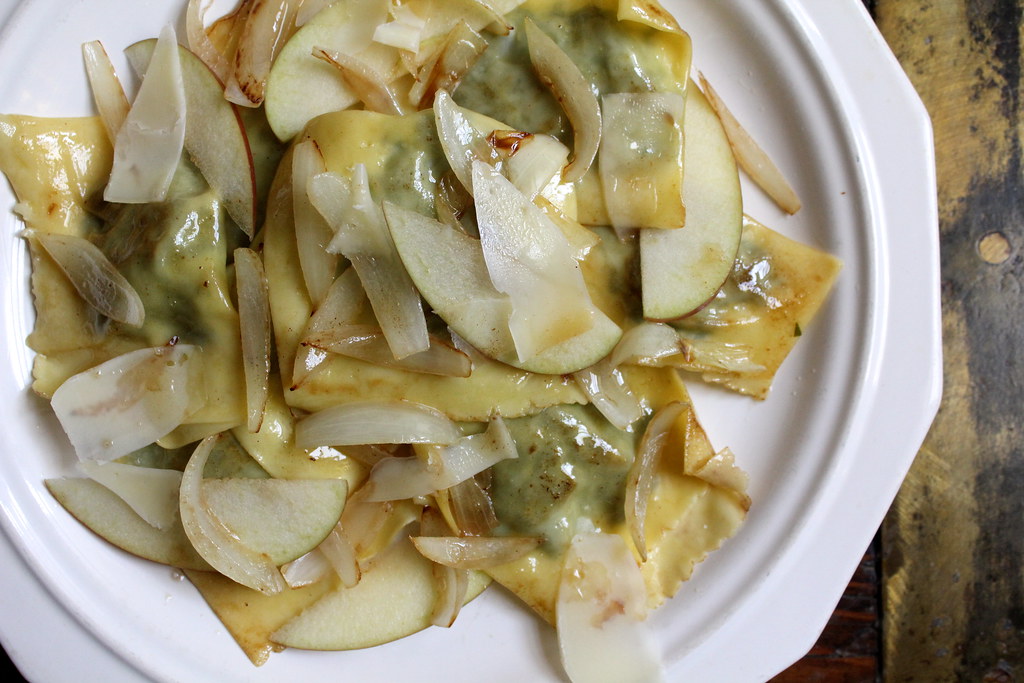 For me, it’s pretty difficult to separate “fall pasta dish” from “squash.” It’s perhaps second only to severing “brown butter” from the presence of “sage.” These things just go together like beets and goat cheese, it would seem. But look what happens when you squash kale inside ravioli (because you’ve used up your squash), and toss them with brown butter, apples and sweet onions (because your sage plant died while you were traveling) instead? It’s a new marriage of flavors for a new season of fall.

I’m not going to pretend that this dish doesn’t take some effort to produce, beyond merely coming up with its components. Making fresh pasta at home is a conscious decision to spend time kneading, rolling, getting flour everywhere, and getting eggs stuck between your fingers. You’ll need to clear away some space for it, if you have a cramped kitchen. That said, making fresh pasta at home is not a perfectionist’s domain only; the pasta can and should look rustic, a little irregular — that’s what makes it so special and unique from boxed pasta. For ravioli, you just need to roll out some thin sheets of pasta dough, and you get to put a creative spin on your filling, too. That makes it worth the effort in my opinion, and a good choice to start out with if you’ve never tried making fresh pasta at home. 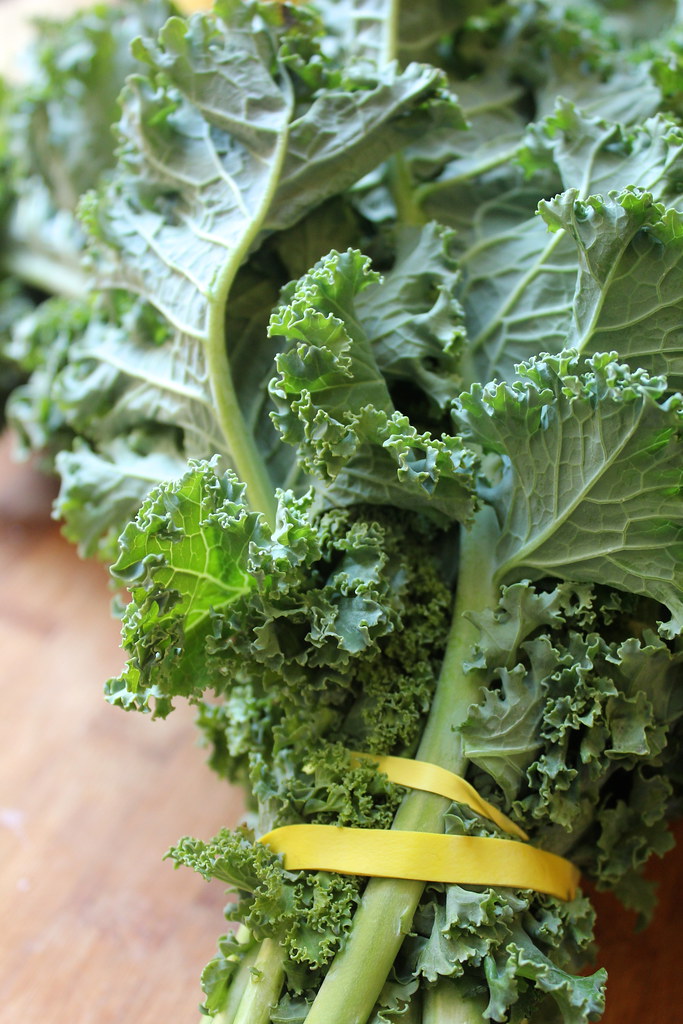 I see a lot of spinach raviolis out there, but what of its rougher, cabbagey cousin, kale? The deep green leaves will get finely chopped up and blended with cheese anyway, and they’re just as nutrient-dense a superfood. To avoid having to squeeze out so many vitamins along with its cooking liquid, I decided not to blanche the kale first for this filling. Instead, I sauteed the leaves, finely chopped, with some garlic and a tiny splash of water, and kept cooking until the pan was quite dry. The wilted leaves got another good mince once they were cooled and packed down. Here’s where you would traditionally add some ricotta and grated parmesan for a more classic ravioli filling; I skipped the ricotta for some very thick Greek yogurt instead. Its tanginess was delicious with the sweet, garlicky kale. Your choice, one or the other! 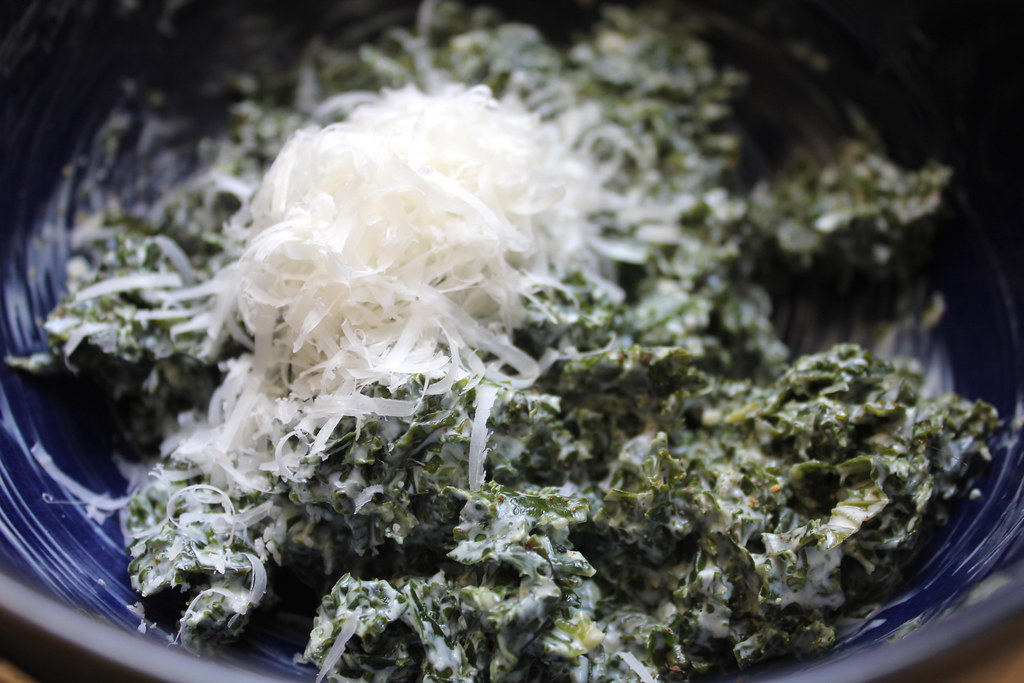 Now, as for rolling out that pasta dough: this is tough without a true pasta crank. Household-sized manual pasta cranks are inexpensive and time-honored. They clip onto your table, and are easy to use. If you have a stand mixer, get a pasta roller attachment. If you have neither, a good old rolling pin and some elbow grease it is. Once you have thin, even sheets of dough, the fun part comes in. I know that there are cookie cutter-like tools to punch out uniform ravioli with. I’m sure there’s a much more precise way to form them without these tools than what I’ve done, too. But for what it’s worth, I rather like just folding one side of a pasta sheet onto a row of filling dollops, pressing out the edges, and cutting the ravioli as squares. I don’t really trim either, leaving some drapey edges where the pasta sheets didn’t meet up perfectly. These edges are amongst my favorite bites in the finished dish. (See what I mean with the ravioli at five o’clock in the photo at top?) I probably get air bubbles trapped in the filling and mess up the shape by pressing the edges to make sure they’re sealed too hard. But it works for me. And it’s pretty fun, any way you choose to form them. 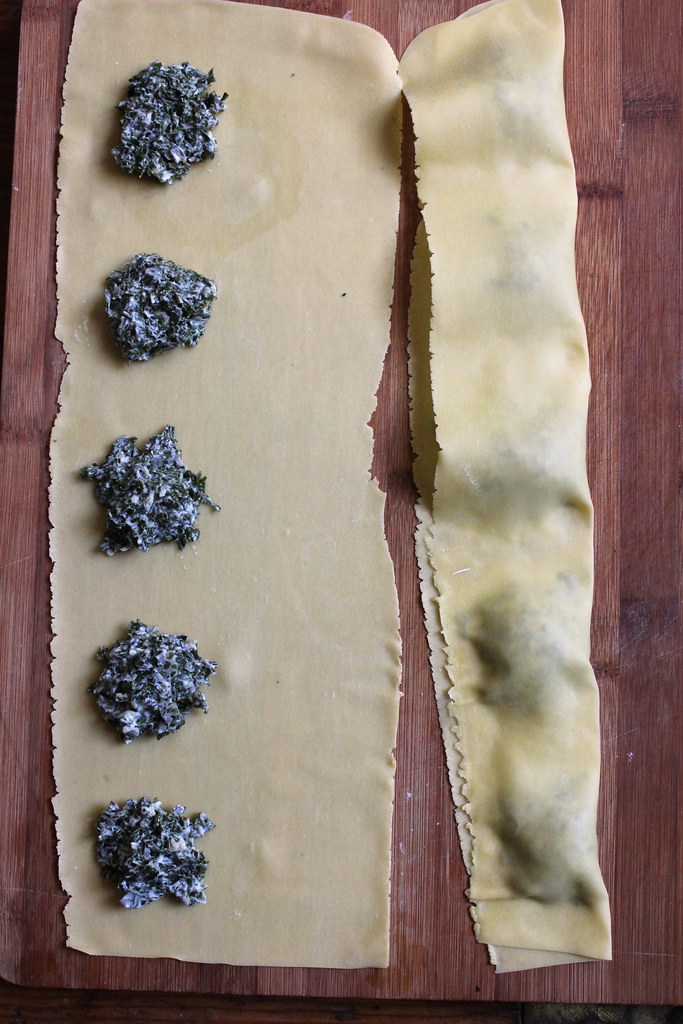 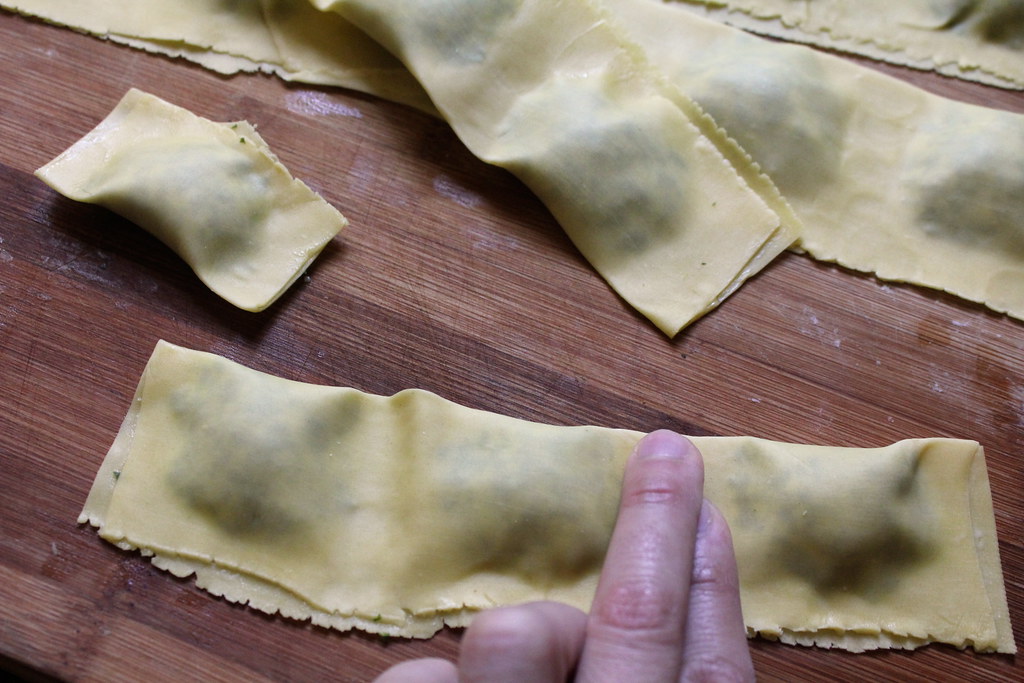 Kale ravioli done, it’s time for some fixins’. Right now, fresh off the tree, apples are so crisp and delicious, and there’s so many local varieties to try. (Mutsu, aka Crispin, is my current favorite.) Although I could have used a contrast of color, I grabbed a yellow onion to just soften in butter until sweet and glistening. Using the same pan, some more butter bubbled until just slightly brown, and the raviolis are tossed in that. On the plate, crisp apples and some shavings of a parmesan block add texture and delicious flavor, and it’s finished! Phew, I know, so much work. 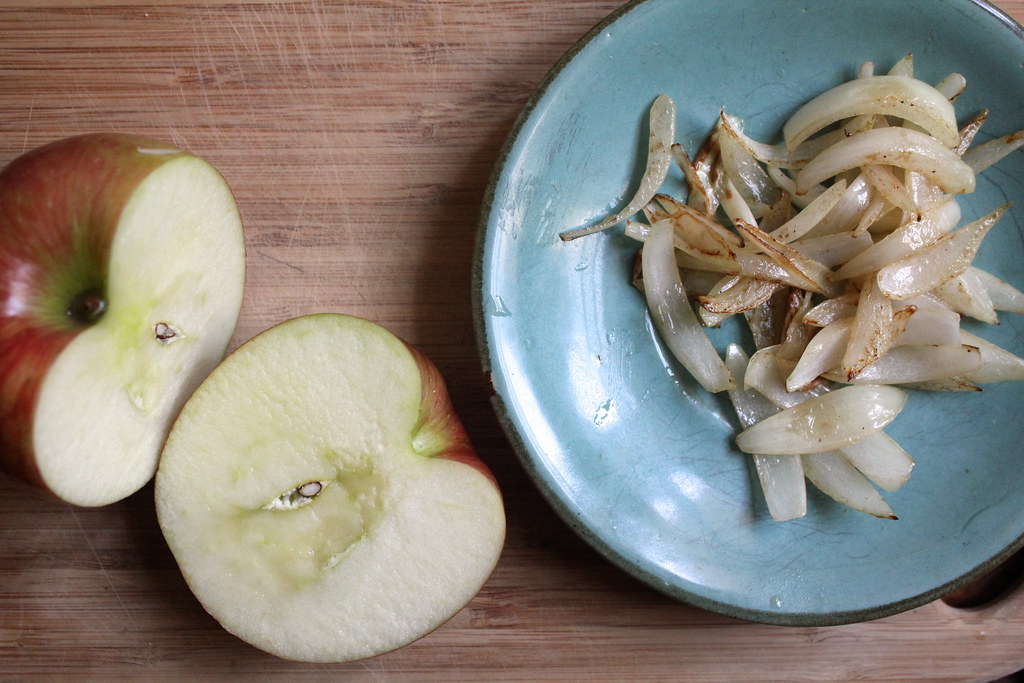 The fruits of your own labor just taste so much better.

Heat the olive oil and the garlic in a fry pan over medium-high. Once fragrant, add the kale, and a pinch of salt and pepper. Add about 1/4 cup of water and cook, stirring occasionally, until the kale is wilted and the liquid has evaporated, 4-6 minutes. Let cool completely.

Put the sifted flour in a large, wide bowl and create a deep well in the center of the bowl. Lightly beat the eggs in a separate small bowl, and pour into the well in the flour. Stir the eggs with a fork, gradually incorporating the flour around the edges of the well as you stir. Continue stirring, letting the flour get mixed in gradually, until the dough is solid enough to pick up and remove from the bowl. Using leftover flour from the bowl, generously flour a surface, such as a cutting block. Knead the dough, adding more flour to the surface as necessary, for at least 6 minutes, or until its surface is smooth to the touch. Cover dough with plastic wrap and let rest at room temperature for at least 15 minutes.

Meanwhile, finely chop  the cooled kale and garlic mixture. Place in a bowl, and mix in the ricotta (or Greek yogurt), and the 2 tablespoons grated parmiggiano-reggiano. Taste and add salt and pepper as desired.

Once the pasta dough has rested at least 15 minutes, separate into two balls and run them one at a time through a pasta crank down to its thinnest setting. (Alternately, you may roll out onto a floured surface using a rolling pin. Do this several times back and forth for each half of the dough, so that the resulting sheet is as uniformly thin as possible. Try to roll them out into square or rectangular sheets about 6″ in width.) Working with one sheet of pasta at a time, place about 1 tablespoon of the filling along the length of the sheet spaced 1″ apart from each other, and at least 1/2″ from the edge. Dip your finger in water and trace your finger around each mound of filling and the edges of the pasta sheet. Fold over the sheet lengthwise, so that each mound of filling is covered. Press out the spaces in between each filling very well, to ensure that they are stuck and to press out any air bubbles. Finally, secure the raviolis along the edge of the pasta sheets. Cut each ravioli apart, and make sure that each piece is sealed well, pressing them sealed wherever necessary.

Bring a large pot of salted water to a boil. Drop in the ravioli and stir. Continue to stir occasionally while the pasta boils for 3-4 minutes. Drain in a colander.

In a large fry pan or skillet, heat 1 tablespoon of butter over high heat. Once it begins to bubble, add the sliced onions and a pinch of salt. Don’t move the onions for about 30 seconds to lightly sear one side. Stir occasionally for another 30 seconds or so, just until the onions are translucent and slightly softened. Remove onions from pan. Heat another tablespoon of butter over high heat in the same pan. This time, allow the butter to bubble and continue to cook until it turns brownish in color. Remove from heat. Toss the cooked and drained ravioli into the pan and gently stir to coat thoroughly in the butter and separate the pieces. Return the onions to the pan and toss together with the pasta, along with a pinch each of salt and pepper. Finally, toss in the thin apple wedges, and arrange on serving plates. Sprinkle each plate with shavings from a wedge of parmiggiano-reggiano. Serve immediately.

Kale Ravioli with Apples and Brown Butter
(for 2-3 servings)

Six maple leaves: It’s a rich, buttery, comforting pasta dish, but you won’t be skimping on your serving of greens with it. Each bite-size burst of kale is dense with Vitamin K, antioxidants, fiber and iron, and it’s not too watered down with cheese. The filling for this ravioli is much more about kale than other ingredients, and I didn’t bother to add a beaten egg as a binder in this filling because, well, I just wanted it to be mostly kale. There is ample cholesterol throughout this dish, thanks to the pats of butter, parmesan, and eggs in the pasta dough. But as I’ve found, you can use fat-free Greek yogurt as an alternative to ricotta to lighten up the dish without sacrificing on taste.

Eight maple leaves: This dish is sourced entirely from the seasonal farmers market, down to the unions, butter and eggs. It’s a good time to eat your fill of late-season kale and other greens, as well as fall brassicas like broccoli and cauliflower, because we won’t be seeing them once the ground freezes.