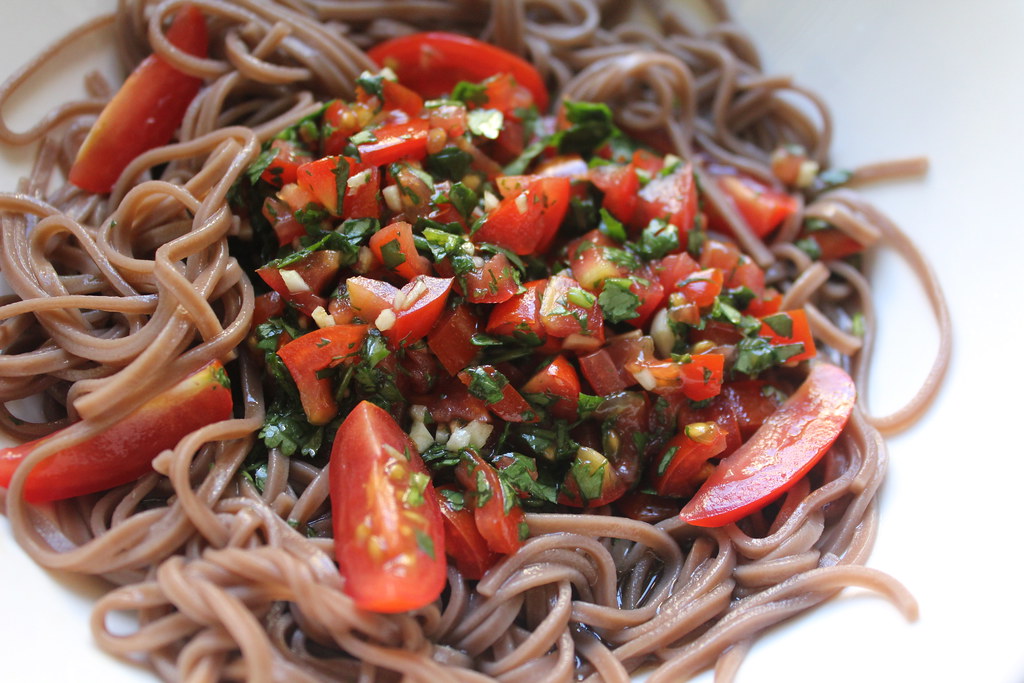 One great misconception about Asian food is that there isn’t much use of tomatoes. In everyday Chinese cooking, for example, there are tomatoes: in scrambled eggs (which is exactly the way it sounds), in eggdrop soup (as soft, vibrant wedges), and as a base for sauces (like a stir-fry of shrimp). Well, I can think of one space where tomatoes don’t factor in too much in Asian food: noodles. And that happens to be where we encounter tomatoes in Western, particularly Italian, foods the most. Let’s mix it up!


It’s been fun being off the grid for the past few weeks. As I mentioned in my last post, I’ve been traveling throughout Taiwan to work on a cookbook, eating and cooking my fill. After landing at JFK last night, I woke up this morning with the taste of cilantro on my teeth. I think I hallucinated that some was stuck between my teeth, which was not such a bad guess, but thankfully, was untrue. But I wanted to taste this, which had become as familiar a taste over the course of my trip as to be nearly intangible, all over again. Like a scent hound on its trail, I went to my refrigerator, where I found a decaying bag of cilantro. This led me next to the green grocer on the corner, where my hunt was found, but not before encountering some ruby grape tomatoes. 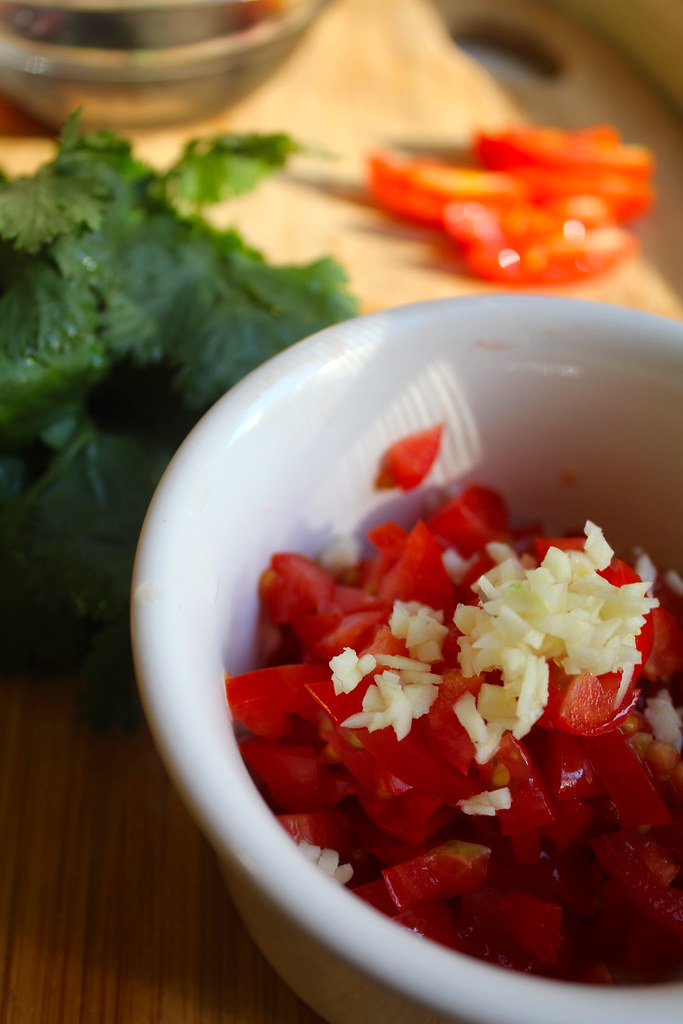 fresh tomatoes, garlic and cilantro are combined with black vinegar


This little, Indian summer-appropriate lunch was tossed together, and it’s something that I could eat every day. The smack of vinegar is what really satisfies my tastebuds, cilantro notwithstanding, and the sweet, juicy cubes of tomatoes seal the deal. I used black vinegar, which is a type of rice vinegar found in most Asian groceries that’s just about the same color as soy sauce. It has less acidity than most clear rice vinegars and a tinge of sweetness, and I think it’s not too dissimilar from balsamic vinegar because of both these. Try using balsamic as a substitute if you can’t find black rice vinegar. 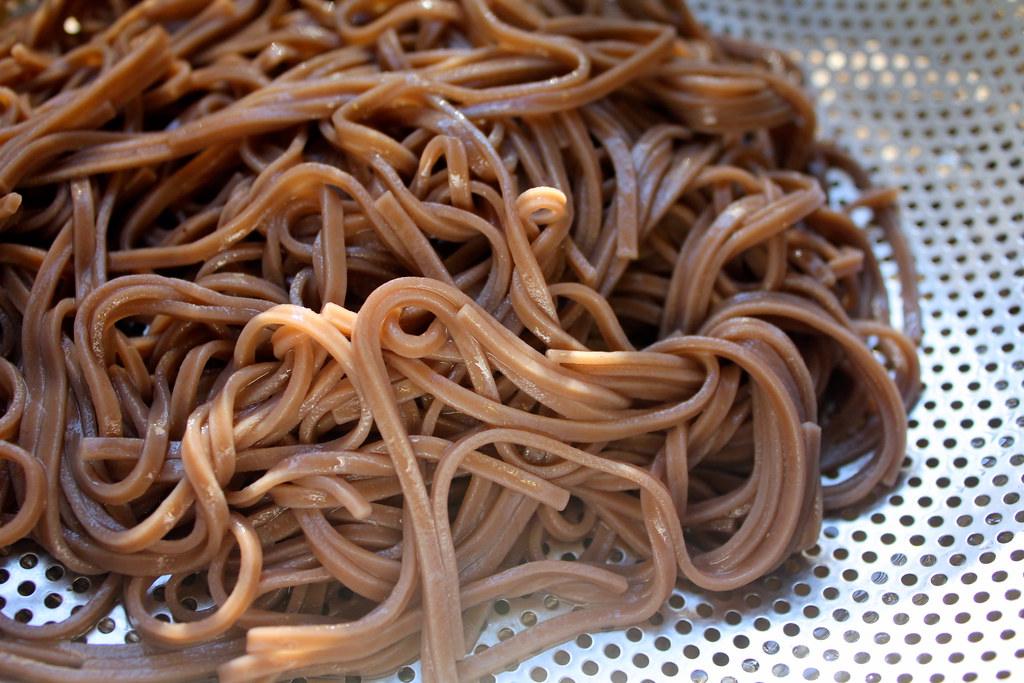 
A rough mince of garlic and a dollop of dark and toasty sesame oil, and the dressing for these noodles is complete. It clings deliciously to the noodles, a totally slurp-worthy dish. I used soba noodles, the Japanese buckwheat variety with a thin, flattened shape, but any noodle can do. The trick is to rinse the noodles immediately after they’ve finished cooking and are drained. Rinse them well with cold water to remove excess starches from their surface, so they will slip and slide in your bowl rather than stick together.

Note: most Asian dry noodles, like soba, contain salt, so their boiling water does not need to be salted.

Bring a pot of water to boil and stir in the noodles. Cook according to the timing instructions on the package, and drain. Rinse well with cold water, untangling with your fingers as they rinse. Drain and toss to dry.

Combine the minced garlic, cilantro, chopped tomatoes, vinegar, and sesame oil in a bowl. Add a pinch or two of salt to taste. Toss the drained noodles with the sauce, and serve immediately. This dish keeps well chilled for up to one night.

Four brownie points: Light and refreshing, this chilled dish has many benefits that might not be immediately apparent. Vinegar naturally aids digestion, and this dish has lots of it. It also has a whole lot of cilantro, which provides Vitamin K and Vitamin A, and raw garlic, which has anti-inflammatory properties and a host of other health benefits. Buckwheat noodles contain more fiber and protein than refined flour noodles, a great choice since they’re so delicate and tasty, too.

Four maple leaves: Oops. It looks like my kitchen is still in another, non-local place even if I’ve returned to the city. Not having much to work with my first day back, I’ve gotten California produce and Japanese soba, along with similarly foreign pantry staples like the black vinegar. At least it’s vegan.