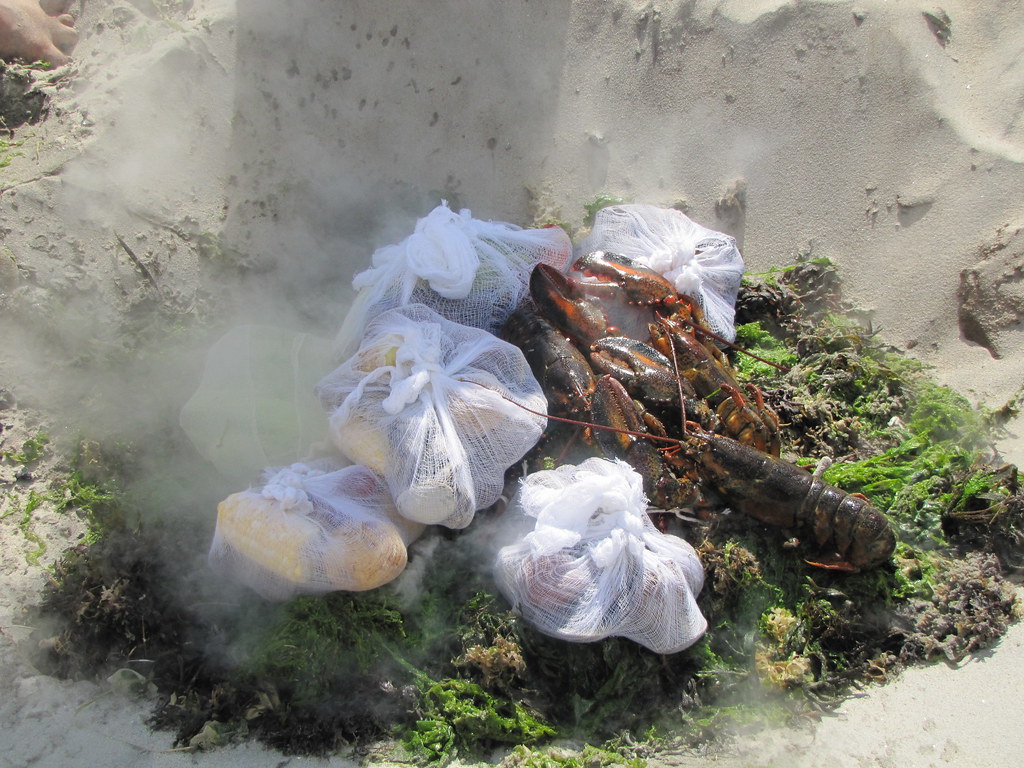 Of all the elaborate communal meals to make, there is one that should stand without question should you ever be on a private New England beach: the clambake. After a whole summer of firing up charcoal for barbecues on the stuffy, blackened rooftops of Brooklyn, eight friends and myself found ourselves in such a tranquil idyll last weekend. We did not miss the opportunity.


Sure, you could fill up a big pot of water, break out the bibs, and have yourself a rowdy clam, crab or lobster boil. You can even get a spit or smoker out and crisp up a whole pig in the city. But rare is the chance to dig a fire pit in the sand and make rocks molten-hot to cover with foraged seaweed. I didn’t actually think we could finagle this. But once I saw the steam gushing from around the sizzling seaweed-draped pit I realized that it was entirely clambake-able. And, loads of fun. 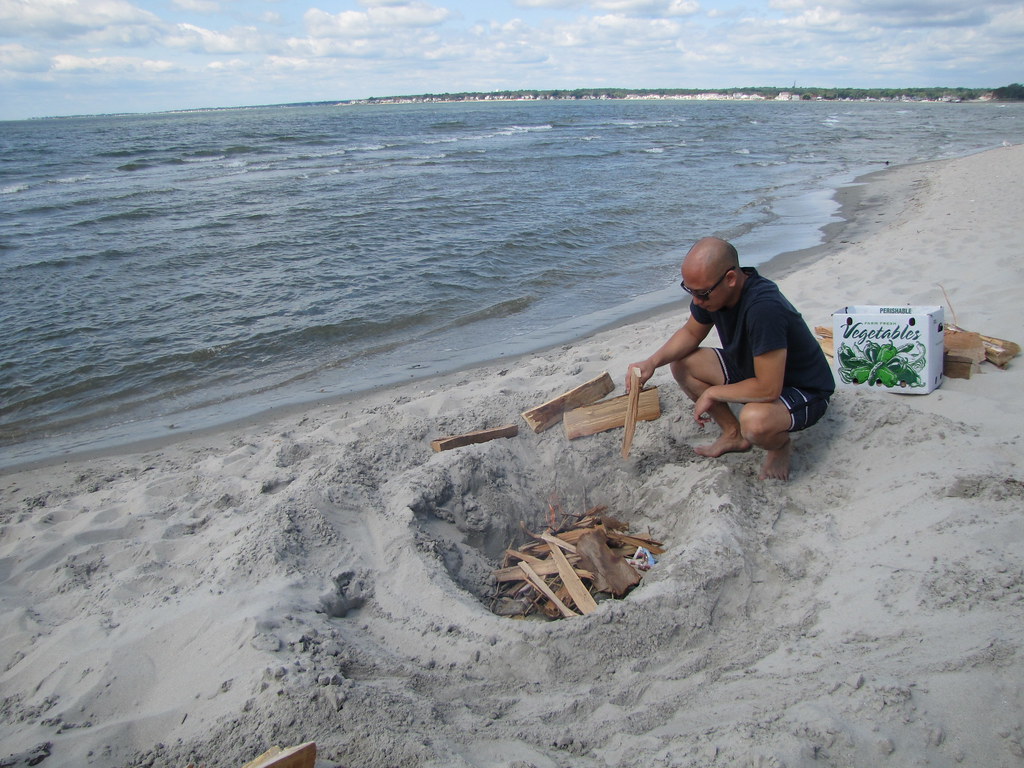 a fire pit gets started with collected driftwood kindling and wood

A proper New England clambake is something of legend that gets us food-obsessed folk giddy with nostalgia, like cooking a Christmas goose. Primitive and, for all intents and purposes, highly unnecessary, it hearkens to an age before electricity, when it was less efficient to make a vast quantity of water boil than to cook your food with direct sources of heat. Seaweed is used to elevate the food from that fiery-hot source and keep it from scorching. It also serves the benefit of flavoring the food and, with everything covered by a tarp, providing enough moisture to create steam. The salt-watery steam is really what cooks the food. 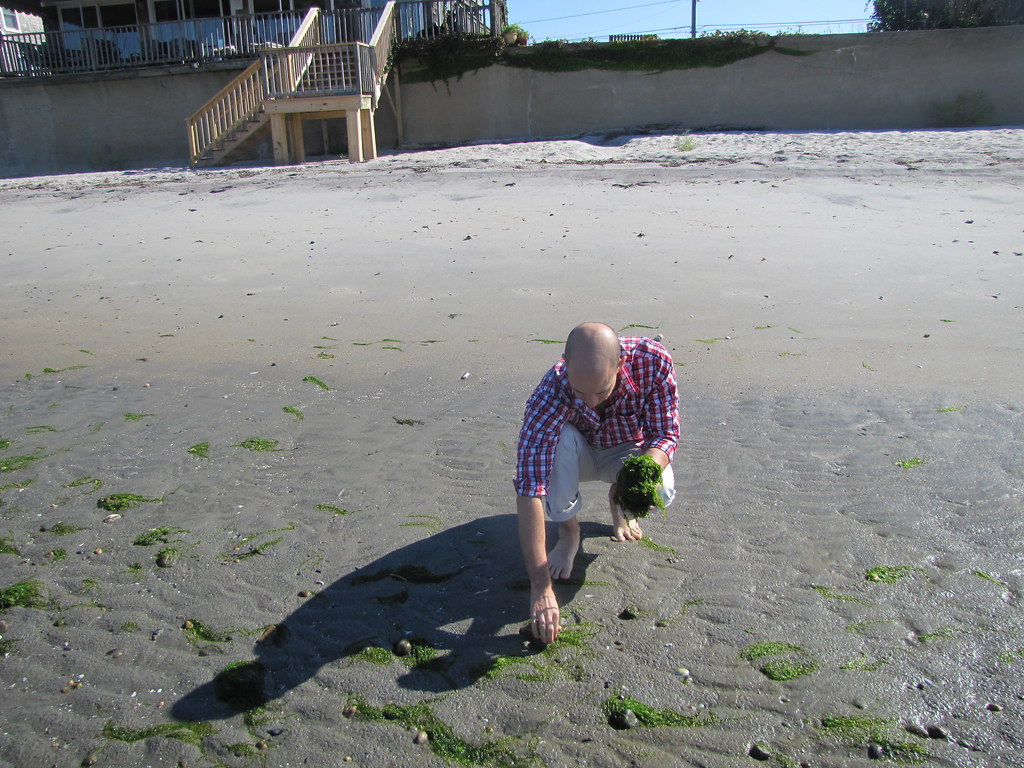 
Could we pull it off? My crew consisted of Dave and Karol, Matt and Lise, Laena, Aaron, Jordan and Ben. We were staying at a rented cottage on the Connecticut shore owned by family friends. My parents have been renting it for a week of September for the last few years. The first day of our week there, we all threw off our shoes, swam, and grilled steak and chicken for dinner, all the while discussing the clambake agenda for the next day. To be sure, we had been discussing this over email for the last week and a half. Everyone slept in tents pitched on the beach. 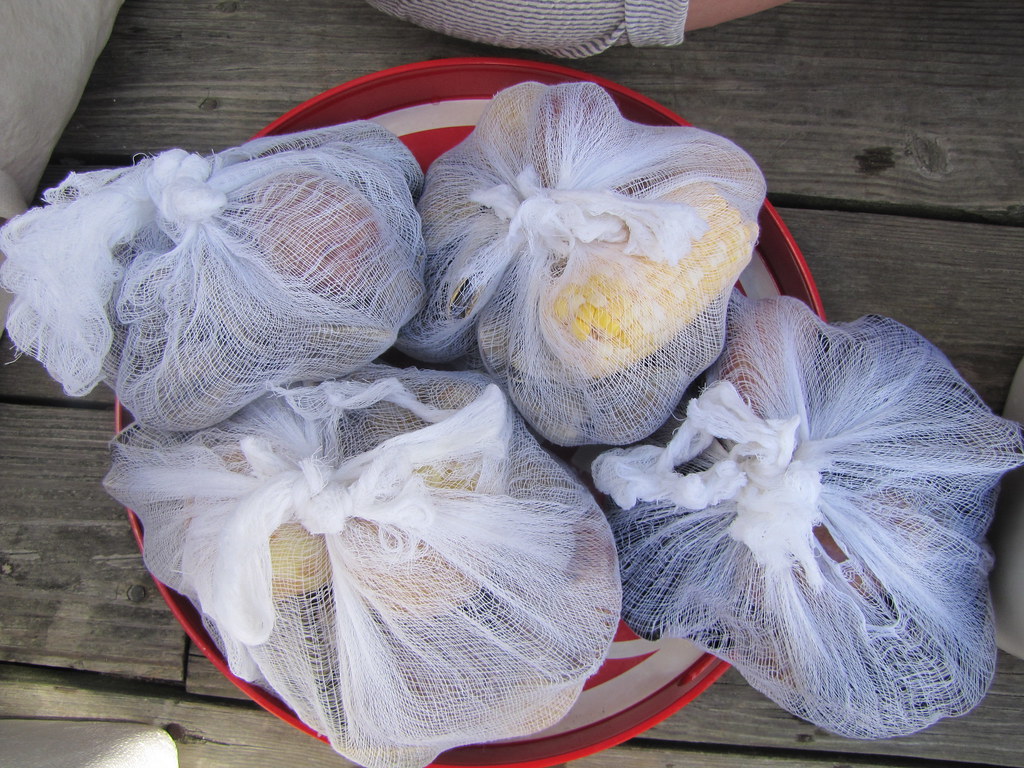 clams, potatoes and corn are bundled in cheesecloth 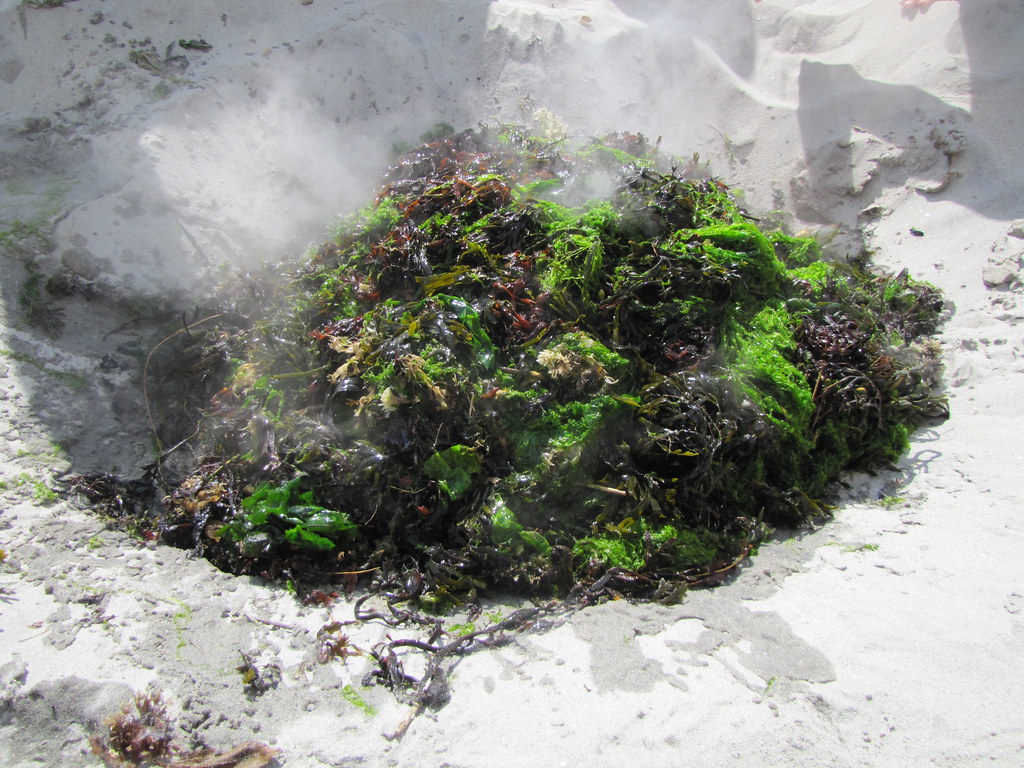 seaweed is thrown on the hot rocks


The next day, we dug a pit and got the firewood going before noon. A clambake takes about six hours, from this start to finish. Everyone contributed: from buying seafood to parboiling potatoes to collecting seaweed to pulling off the tarp in unison like a magician with a rabbit hat. Special thanks to Mark Bittman/The New York Times for providing wise guidelines for clambaking in this article. Bittman writes: “Unless you’re a veteran, something is likely to go wrong.” None of us had clambaked before, and somehow nothing bad happened. A few of us worried that the rocks would explode and take out someone’s eye; others, that they wouldn’t get hot enough to cook the food. We determined that sandstones were more likely to break, and fortunately Ben, who hails from Melbourne, was adept at discerning which rocks were sandstone and which would (probably) be safe. 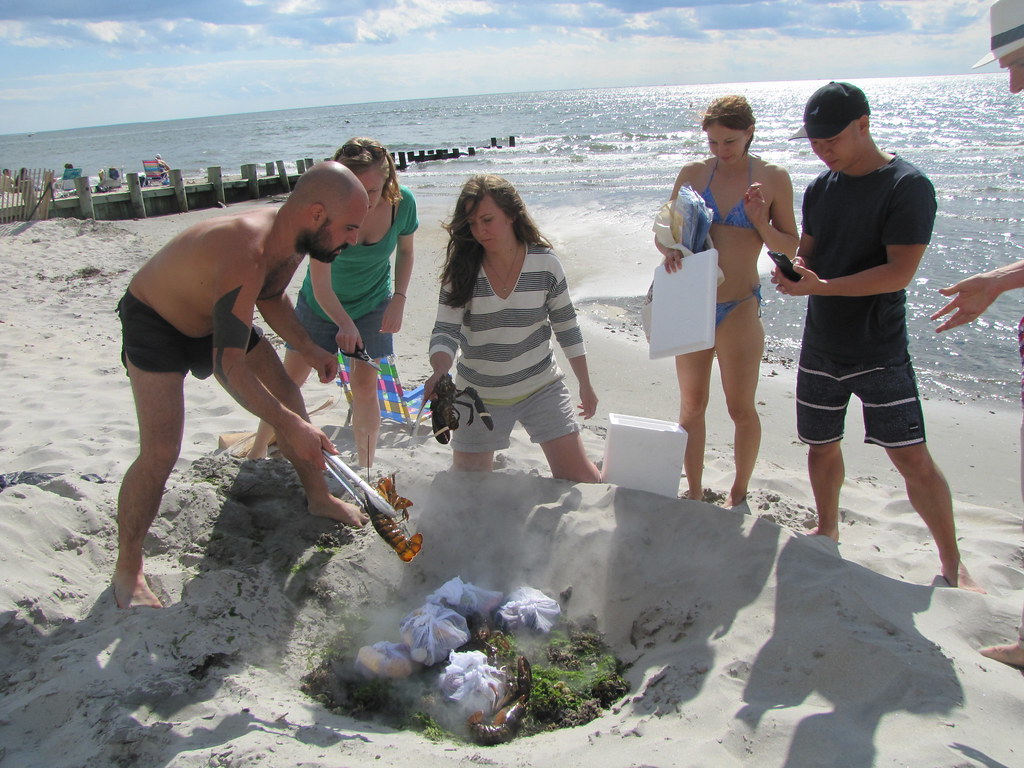 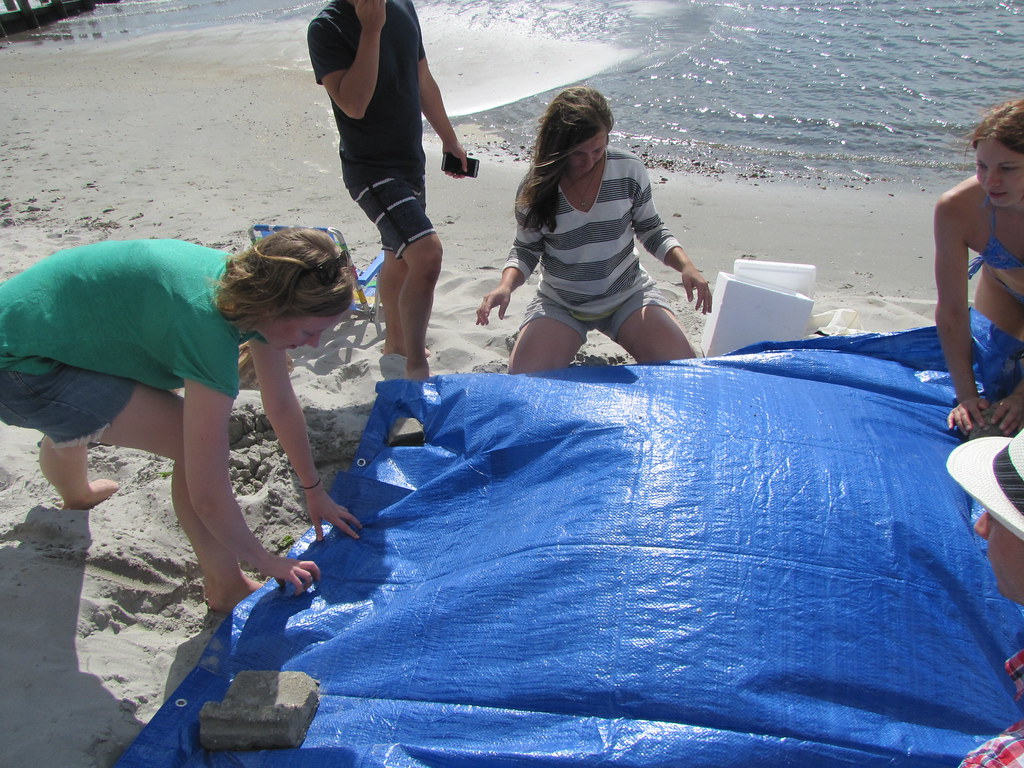 placing food in the pit and sealing its “lid”


That’s about the only footnote I would add to the articulate clambake “recipe” set forth by Bittman, which we followed. We also used a heavy blue plastic tarp instead of a canvas one, which was agreed “not as nice,” but it kept the steam in without any melting or burning whatsoever. I might add, too, that you should aim to cook much more seafood than you’d expect, because even after snacking before dinner, we polished off all the clams and lobsters and licked the shells clean. Thankfully, I had a motherlode of tomatoes and whipped up a pasta for those still hungry as an after-supper “snack.” I like my mom’s observation the next day: “They are all healthy young people and boy can they eat!!!” 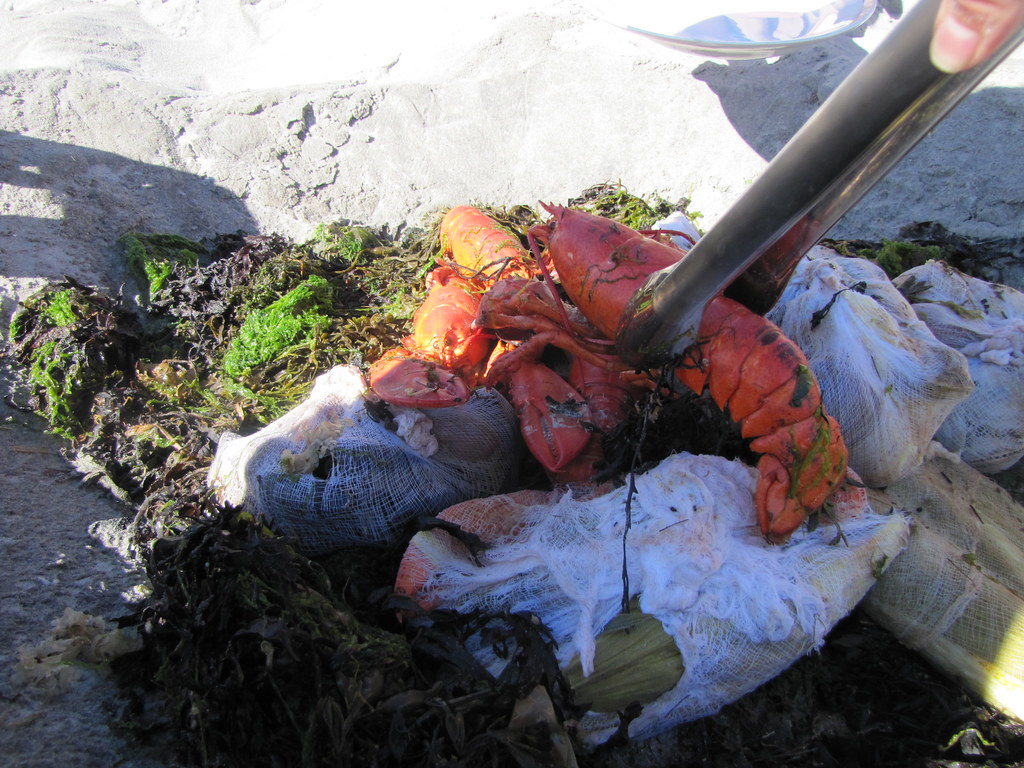 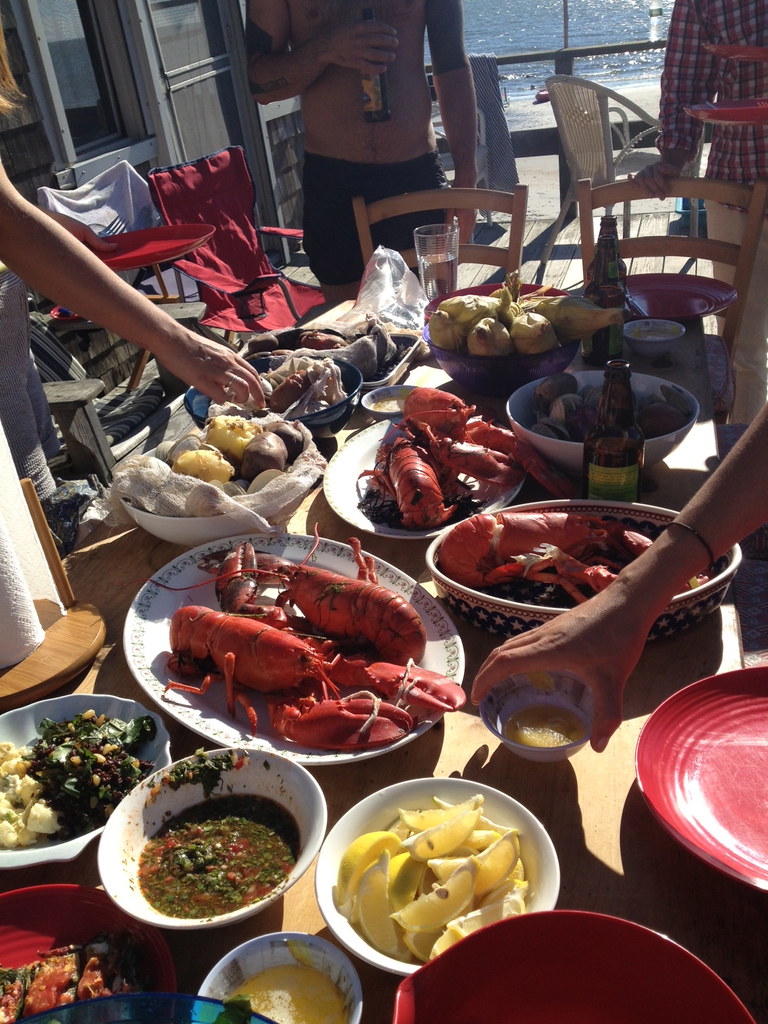 a seafood meal is served


So yes, if your clambake is populated with hungry, young, sand and sea breeze-deprived city dwellers, perhaps buy a bit more seafood. All that digging, foraging, and playing on the beach will certainly work up an appetite.