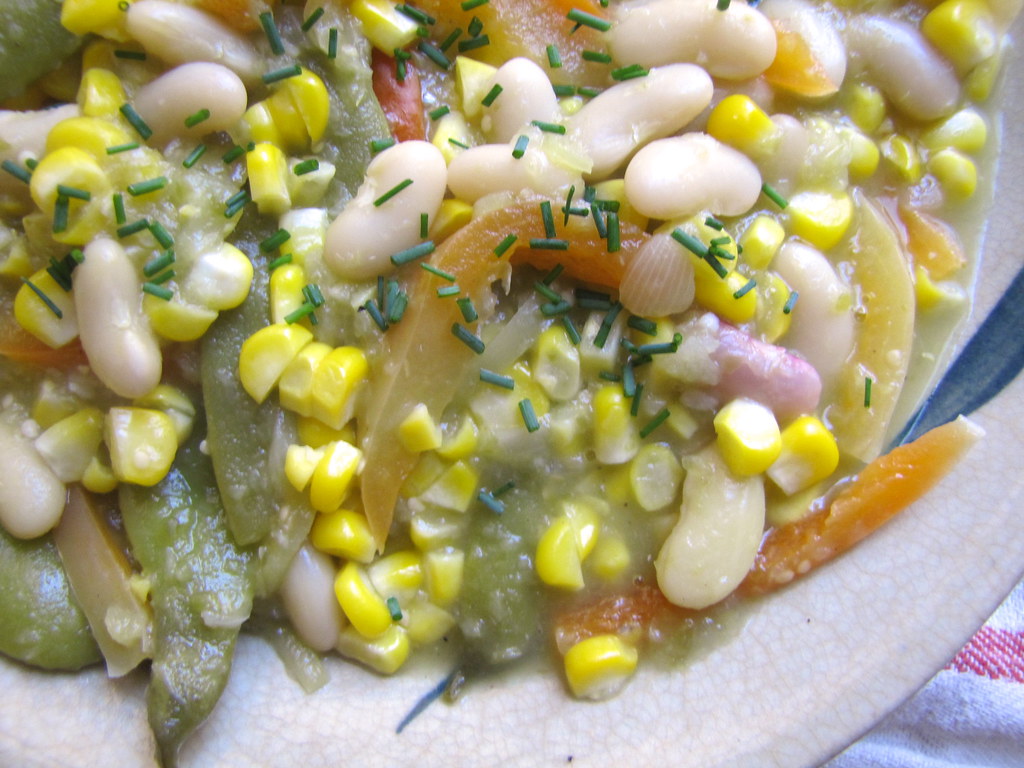 I’m not sure why tomatillos aren’t as popular as tomatoes around the world. They’re as easy to grow as tomatoes, and they’re even covered with a natural, papery husk to protect from bruising or the need to even rinse dirt off. Yet tomatillos don’t appear to be as well integrated into cuisines outside of Latin America, which is too bad, because I love their intense tanginess, and thick, jammy consistency when cooked. So I’m using them as a base for a fresh bean and sweet corn succotash.


Succotash is a quintessential harvest-time dish with a Narragansett word, so we’re well North of Latin America, in New England, given that provenance. But its components are beans, corn, and sweet peppers, all ingredients that are commonly eaten South of the border, too. It didn’t seem too much of a leap to slip tomatillos into a summery, fresh bean and corn-studded succotash, then. 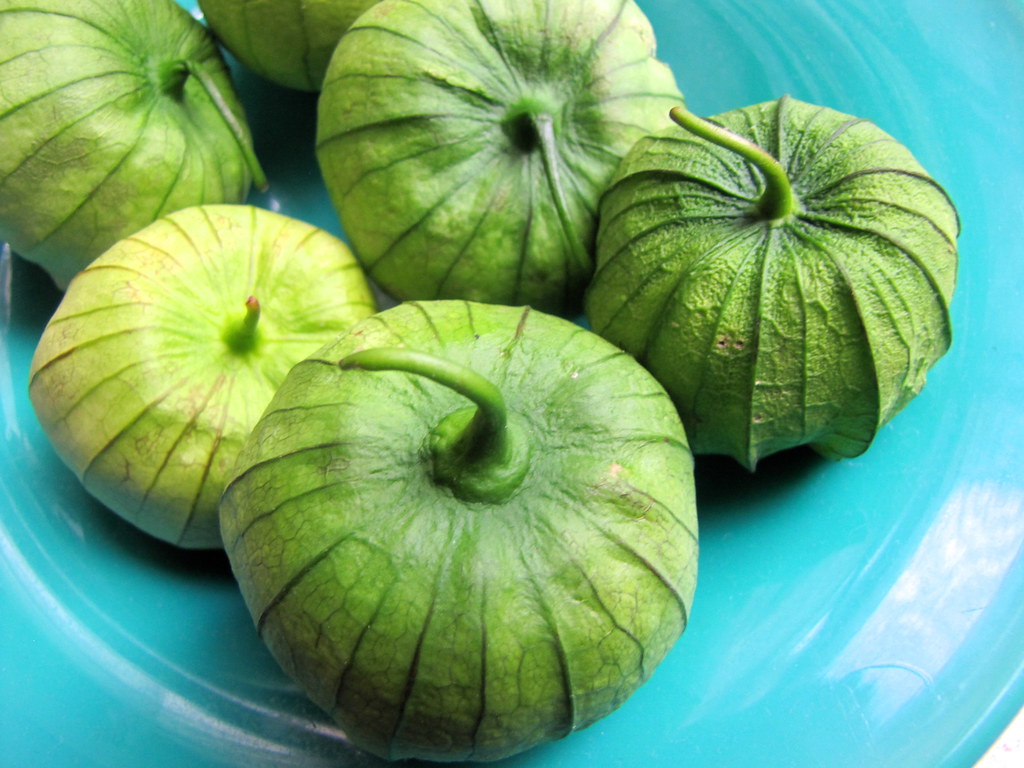 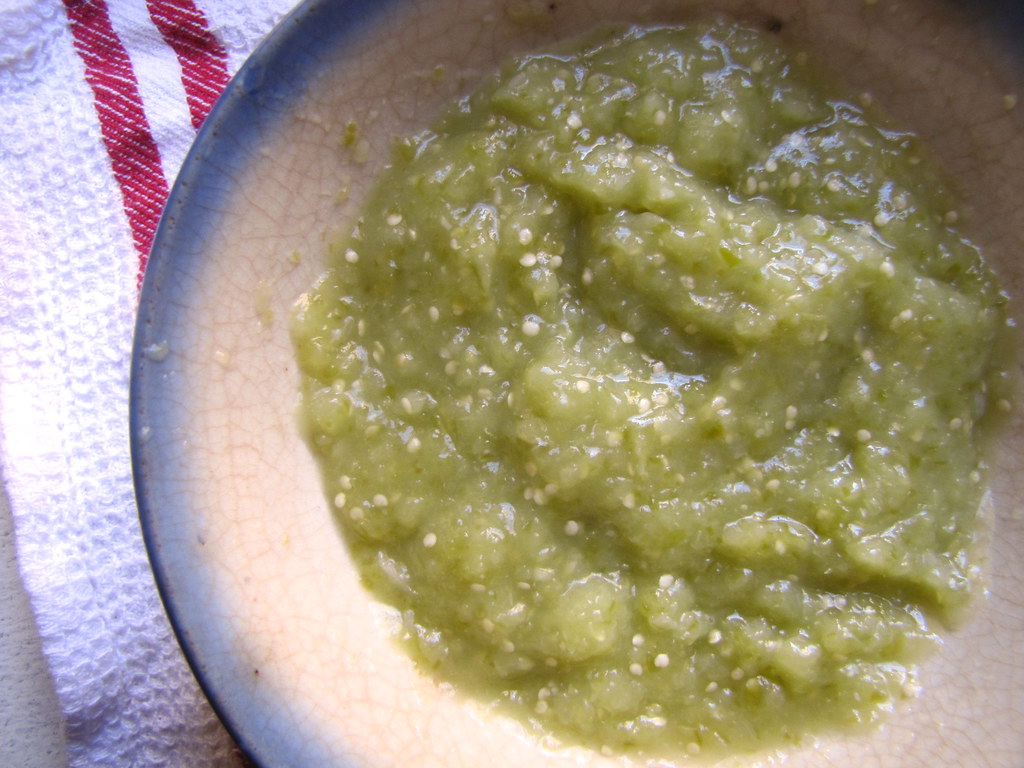 
And how refreshing it was with this addition. I just love cooking in late summer to early fall, because there’s so many varieties of produce that are fresh and crisp — including beans. I grabbed some literally just-shelled cannellini beans that were still sticky from the residue inside the pods from the Union Square Greenmarket last week. I think some cranberry (or red kidney?) beans got mixed in with the lot, as some were vibrant magenta instead of ivory to pale green. Very fresh beans need very little time to cook, and don’t crack or fall apart, skins slipping off, like dried and reconstituted ones do. I encourage you to go find some now! 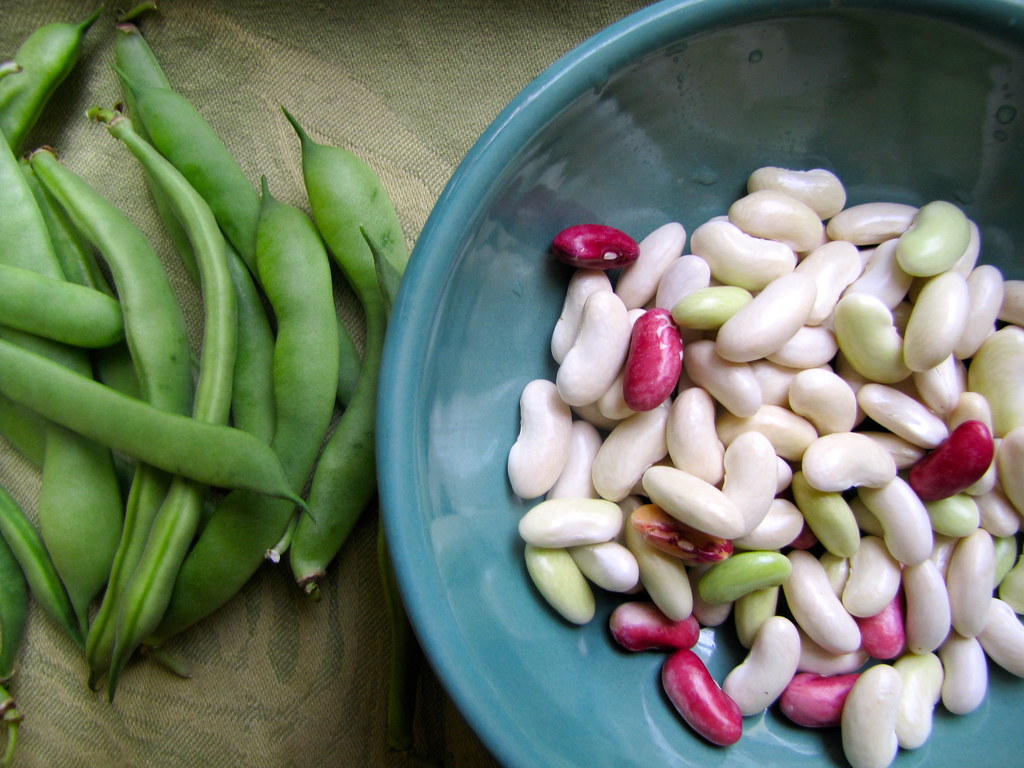 
In addition to these shell beans, I picked up some wavy, flattened romano beans from the market, too. These need to be cooked a little more than your skinny, tubular pole beans like haricot verts or yellow wax beans, so I thought they’d be the perfect accompaniment to this stew-like vegetable succotash. They were also so pretty that I didn’t want to chop them up into awkward chunks. So I kept them whole, and to manifest that long, slender theme, sliced my sweet peppers into longish strips. Too bad we don’t have thin, little ears of Asian baby corn at the farmers market here, too. 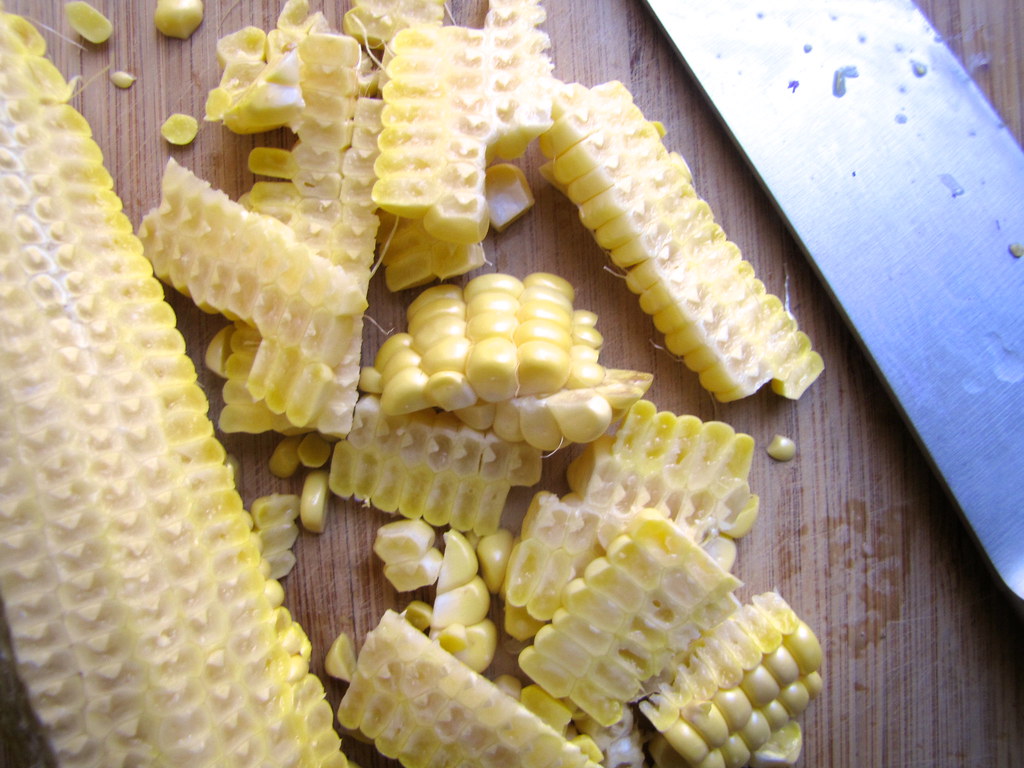 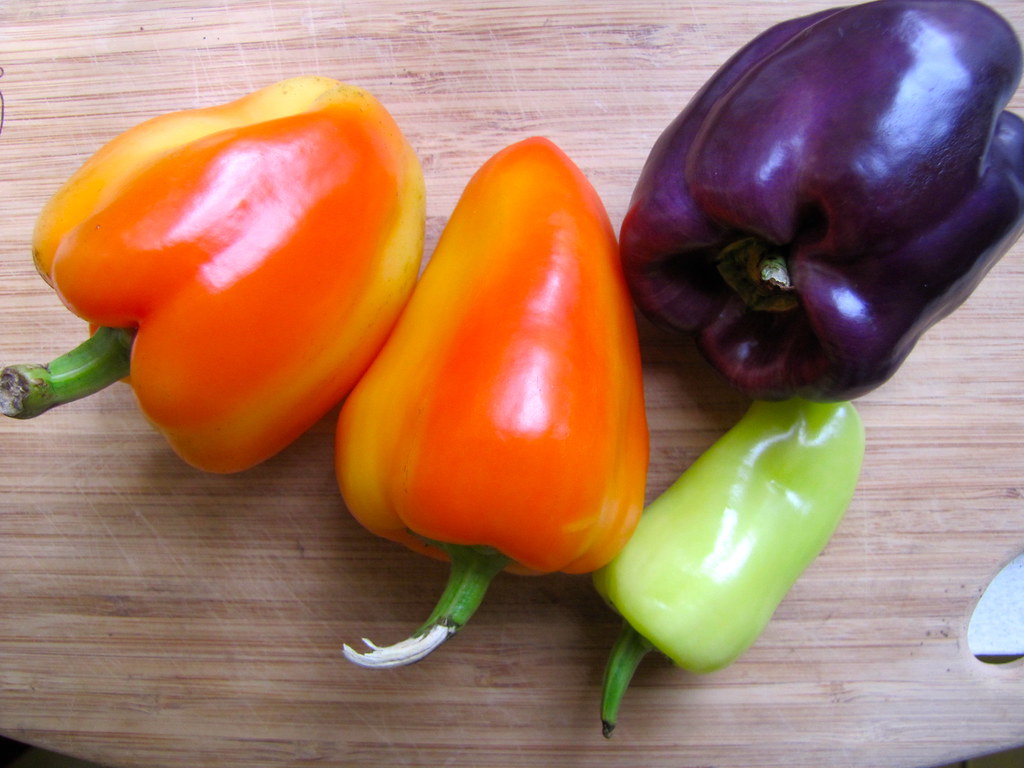 
Because they’ve been so exotic to my culinary repertoire in the past, I was really intimated about cooking tomatillos until a few years ago. In a word: they’re a cinch. Drop the husked, green orbs into a pot of water to cover and boil ’em 10 minutes or so, then puree. You don’t even have to peel the skins. Add some fresh chopped onion and jalapeno to the blender, and you’ve got green salsa, with salt to taste. And with this primitive, pale-green sludge, I let my shelled beans simmer before adding the peppers, romano beans and some onion. 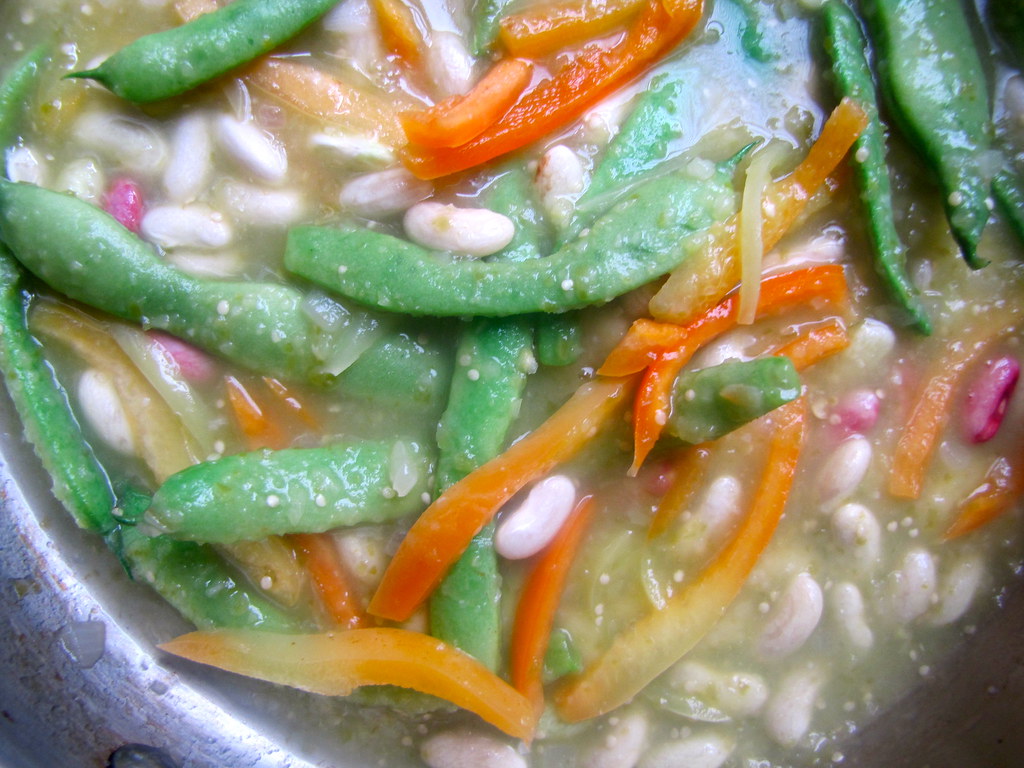 Tomatillos mellow in tartness as they cook, and by the time the snipped kernels of sweet corn were added to the pot, it tasted pleasantly bright, rather than bracingly sharp. The corn really sweetened the deal in a literal sense, though. Barely cooked for just a few minutes after stirring in, this succotash, or some sort of variant of which, was ready to serve and tasty as a veggie dish can be. As a side dish, it really satisfies while complementing richness in a meaty entree. On its own, I was satiated, thanks to the fresh allure of these just-picked ingredients. Make it with plenty of other additions since we’re in the midst of their harvest season, like fresh okra, summer squash, new potatoes, etc. Yes, tomatoes — the red kind — will work here in addition, too.

In a saucepan with a lid or Dutch oven, heat the olive oil and once hot, add 1 cup of the tomatillo sauce. Add the beans and season with salt to taste. Add 1 cup of water and bring to a gentle simmer. Add the romano beans and peppers and once at a light simmer, cover and let cook for 15-20 minutes. Taste for seasoning, adding salt and pepper as desired. Once the beans are just tender (if using fresh beans), add the corn and cook uncovered, stirring occasionally, for another 5 minutes. Serve with the optional fresh herbs.

Three brownie points: Lots of plant-based protein here with two types of beans, and very little added fats in this dish. Other highlights include the antioxidants in sweet peppers, and fiber in the corn, beans and tomatillos. The Narragansett were onto something truly healthful with this winning vegetable medley.

Nine maple leaves: Everything was purchased on a leisurely stroll through the late-summer Greenmarket, sans the salt, pepper and olive oil. This dish is great for using up remaining items from your recent shopping trip (or CSA), like lone peppers and stray ears of corn.