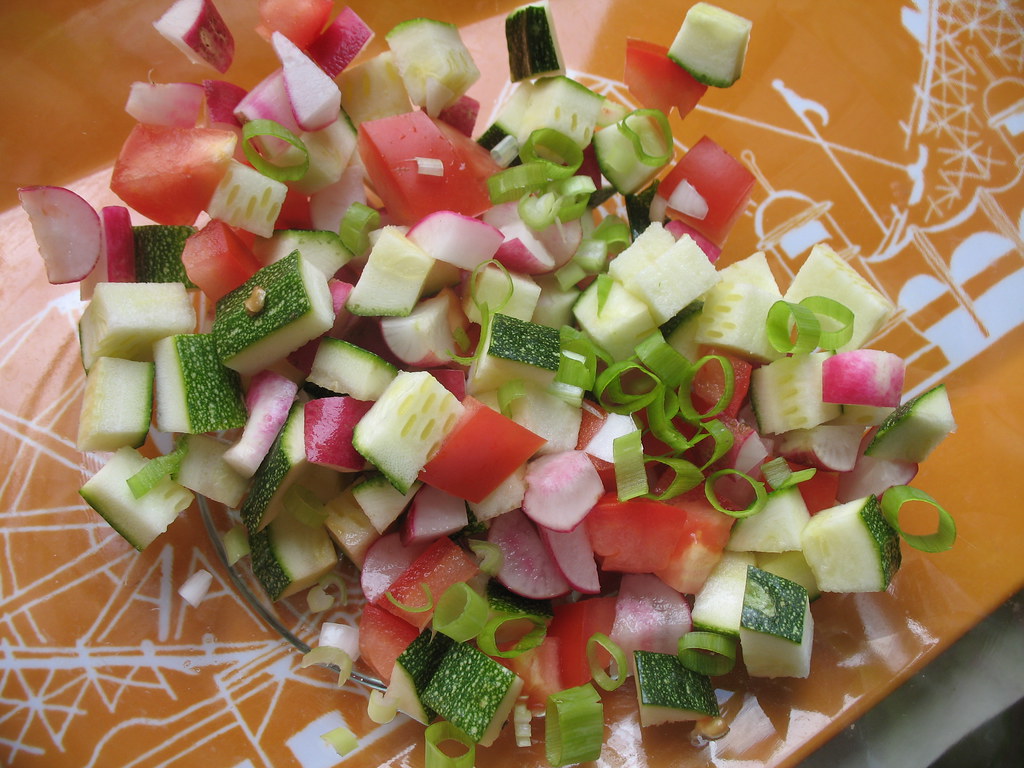 It’s hot enough to cook a hamburger on a car’s hood. But that’s probably not the kind of food you need right now, in 100-degree heat. The weather has become brutal in NYC, and it’s easy to use that suffering as excuse to lax up on good eating habits. But if you eat a lot of warming, acid-forming, heavy or greasy foods, too, the heat will only get worse… internally.


So, what to eat? I think we’re pretty familiar with some foods that naturally offer a cooling effect (e.g. cucumbers), and are aware of certain types of preparations that can decrease it (e.g. deep-frying). But part of the fun about filling up on food while you’re trying to stay cool (and no, that is not a paradox — you should still eat in the heat!), is understanding more about the effects of certain foods on your body. For better or for worse, maybe. But truly, if you knew more about what was for “the better” and what was “the worse,” would you really be eating ginger-beef bulgogi tacos on a stiflingly hot day (ginger is a known “warming” element, and yes, I know many of you do)?

Let me just say that I am NOT an expert on nutrition, herbal remedies, macrobiotics, traditional Chinese nor Ayurvedic medicine. But I have picked up a few cues over the years, based on personal experience and books. When my dad had an injury, he saw a traditional Chinese medicine doctor for several years after, who prescribed a thorough treatment of qi gong, acupuncture, herbal tonics, and… food. It was then more clear to me all the cues I had picked up about foods beforehand; when I was growing up, I was prone to coldness and circulation loss in my fingers, and people told me to eat more ginger, chicken soup, and, essentially, yang. Right now, however, I know that I need to have more yin to balance all the crazy sweat and greasiness that I’m feeling, fast. Like I said, I’m no expert. But if you listen, learn, and treat your body appropriately, it will thank you back.

Cucumbers, what exactly do they do? They’re full of water and are typically prepared raw and cold. That’s great, but they’re also incredibly alkaline, detoxifying, and nutritious (especially when you leave the skins on). They’re in the melon family, which has body-cooling effects all around, and include squashes along with watermelon and cantaloupe. This whole family of fruits is your friend right now. Here’s a recipe with both cukes and summer squash, along with nectarines and mint.

Watercress, what, what? Maybe the prenoun “water” is enough to sell you on hydration purposes alone in high heat. But while this spicy green grows in h2O and is named thusly, it’s also very cooling, aids digestion, helps your liver, thyroid, skin, and has a lot of iron. At least, that’s what they say. I say it tastes better than most limp salad greens and can also be lightly cooked while still retaining those crisp stems and I just like the sound of it. In everything. Like this wheatberry salad.

Tofu can show you the way to a cooling meal, too. I know you hate tofu, but do you also hate fresh mozzarella? Because that’s kind of how it tastes in a salad sometimes, especially this one with cucumbers and nori. I’ll never forget the time I cooked a Hapa Kitchen dinner and we made steamed buns with heirloom tomatoes, Thai basil, and firm tofu slabs coated with sea salt and olive oil and somebody said, “oh that fresh mozzarella’s great!” Got you. Hope to get you, more knowingly at least, too.

Radishes have bored me for my entire life as thin, crisp discs tossed into salads. But until I began cutting them in big-ol wedges and really tasting them — and then, roasting, grilling or sauteeing them — I really began to notice their effect. Pickled radishes are smart because they retain their crunchiness while adding digestive smack, but ordinary, raw (or lightly cooked) radishes alone are very cleansing, as well as cooling, to your body, too (and without the heating spice that’s often accompanied with pickling, as in daikon kimchi). My friends and I have laughed over one too many “radish burps” recently, because they kind of make you burp, and then you taste them all over again. Maybe I didn’t make radishes sound so appealing just now, but here’s a hopefully better recipe for that, along with (another cooling ingredient), strawberries.

Eggplant is in the nightshade family of vegetables, and as that lovely descriptor might sound even more lovely in the strong, midday sun, nightshades are cooling, yin foods, too. They include tomatoes, peppers and potatoes, who’d have thunk? But because eggplants do need to be cooked before eating them, you might not assume them to be especially yin. Beware, though, eggplants are pretty tempting to deep-fry, but there are better ways to bring out its mushiness while retaining its cooling powers. This cubed salad, or “tartare” of them with fresh tomato, is one way. Another is this cold, cooked and blended eggplant soup.

Hopefully you’ll have clicked around through the links and were inspired to scout out some more info on traditionally-believed “cooling foods” out there by now, and are excited to cook with them this summer as I definitely am. For the record, I really like Modern Day Macrobiotics and Ancient Wisdom, Modern Kitchen, but I kind of wish there were more books like that around to read (got any suggestions for me?). I tried to keep the recipes linked here from this blog’s archives to those that were of minimal fuss (and steam) to make happen, too. But what’s the matter? You’re wondering whether you can still enjoy some of your favorite summer foods without overheating?

Oh yes, the Big Question: Does all this crap about cooling foods mean that I can’t enjoy basically any sweets, meat, seafood, spice, refined flour products and fat if I want to stay comfortable in the summer? Absolutely not, but just be reminded to keep it all in balance. That’s the essence of that stupid yin-yang symbol that you wore around your neck in eighth grade. And it’ll maybe make you think twice about flipping that hamburger on your car’s hood, in case you were actually tempted to try.