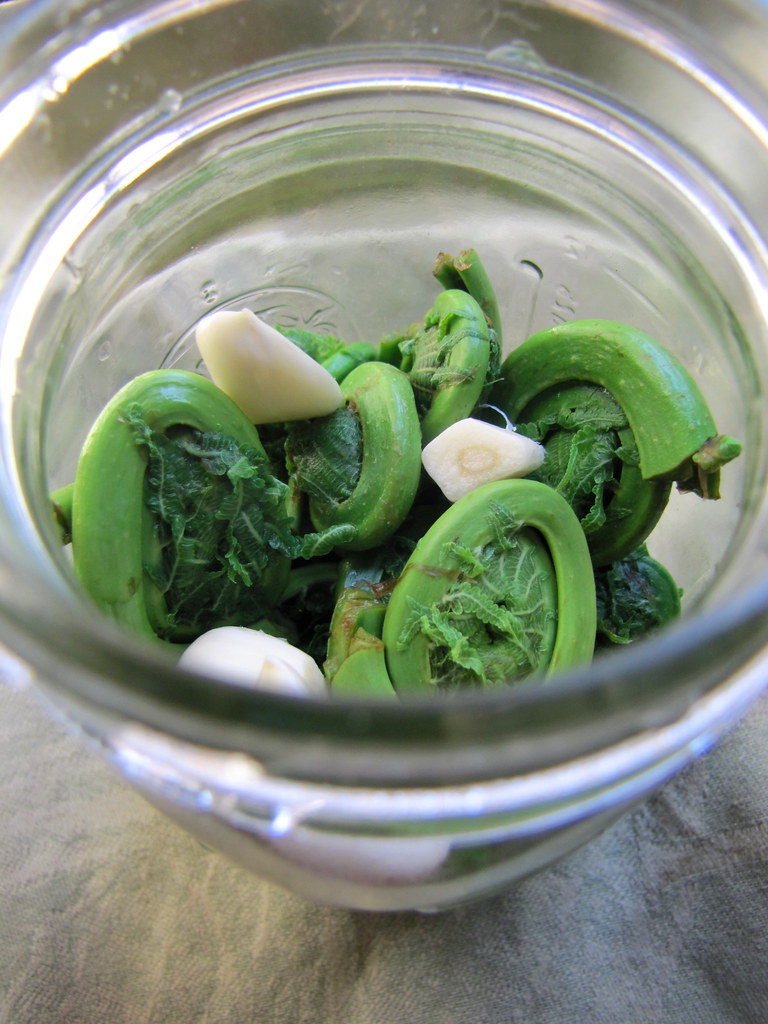 Not sure what the heck to do with fiddlehead ferns this spring? Here’s a solution — pickle them. Then think about ways to use them for as long as you want.

Another locally foraged wild edible singular to the spring (see last week’s ramp recipe), fiddlehead ferns are pretty hard to pass up whenever you come across some at a farmers market. Their furled, fuzzy shape is reminiscent of an ornate scroll, or a violin’s carved tip. They’re cut from ferns, and biologically-speaking, the types of ferns from which can range. The fact that they’ve traditionally been foraged as food in regions from Asia to Europe and Central America can tip you off to this diversity. And before you jump to conclusions that they’re foraged for their adorable appearance’s sake only, these fern-tips are incredibly nutritious across the board. That is, as long as you don’t choose the poisonous ones.

Most of the ferns you’ll find at farmers markets here in New York are from the ostrich fern plant, and they’re literally snipped at the bud in the spring, before the plant has the chance to unfold its billowy fronds. They’re totally edible. But it’s widely advised to boil or steam fiddleheads before eating to wash away excess tannins, and bitter flavors. Therefore, before pickling these fiddleheads, you should take this step first, and rinse thoroughly. The fiddleheads will continue to cook in the hot brine a bit after it’s been poured over, and while the jar is processing. 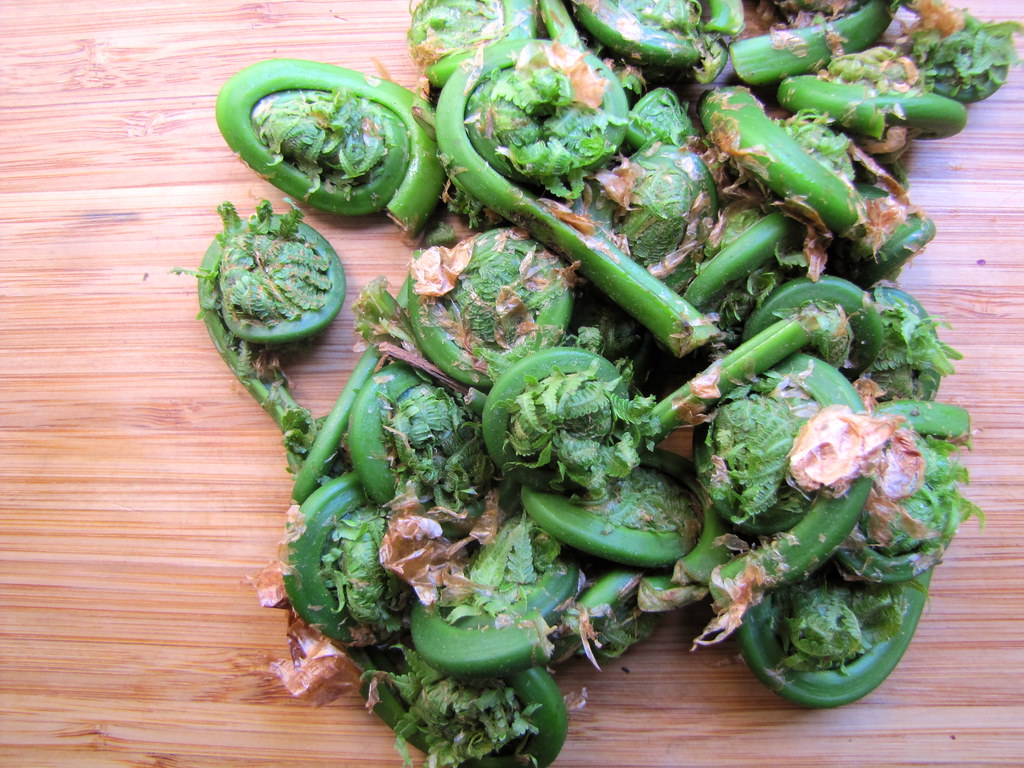 fiddlehead ferns, straight from the field


I’ve followed a pretty standard procedure for “cold-pack” pickling, which requires a good mason jar with a screw-on lid, which eventually seals its contents air-tight. I chose red wine vinegar as the base for the brine, a sweeter-tasting, slightly floral variety as opposed to more acidic candidates like apple cider vinegar. And because I wanted these fiddlehead pickles to pack a little bite, I added four raw garlic cloves to the jar along with my pint of fiddleheads. Some mixed peppercorns and a pinch of red chili flakes boiled with the brine as my pickling spices. You could add to them mustard seeds, fennel seeds, allspice, or dried herbs like oregano as well. 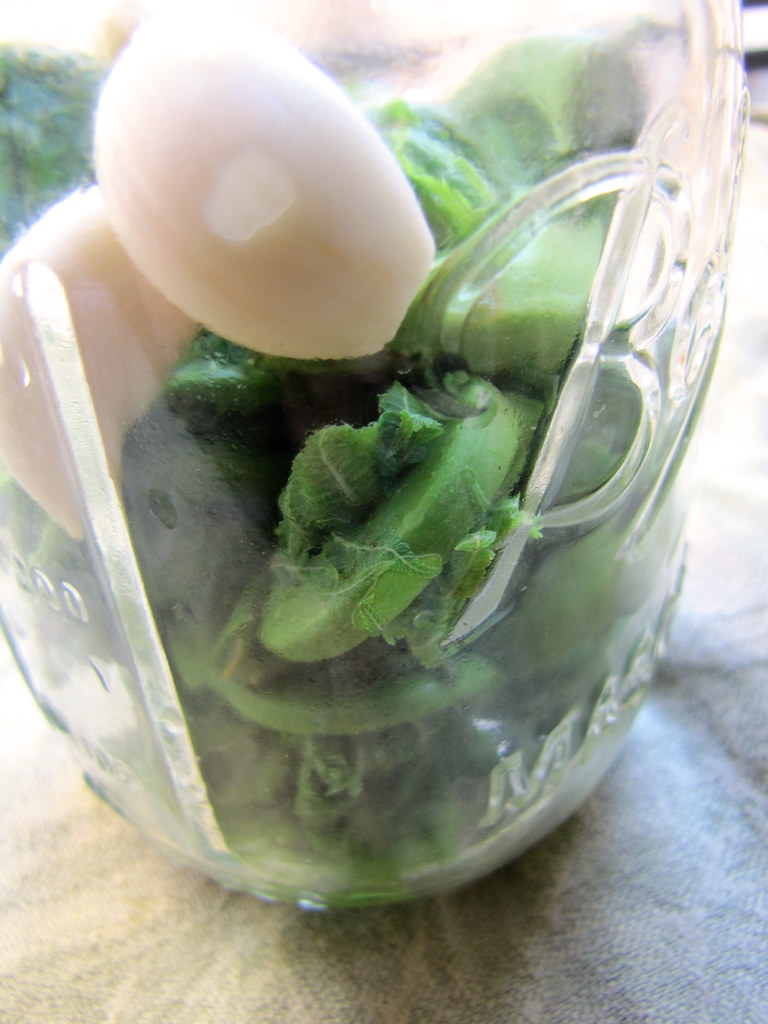 
As soon as the hot brine is poured into the jar of fiddleheads and screwed shut, place the jar in a bath of boiling water — standing upright — to “process” it for ten minutes. It’s simple. After this step, there comes a nervous stretch of anticipation. It takes as little as twenty minutes or a few hours until the jar’s lid sucks in, with an audible “pop” usually, which means the jar is sealed for good. You can keep it outside of refrigeration, preferably out of sunlight, for as long as you want now. They look so pretty you probably won’t want to too soon. 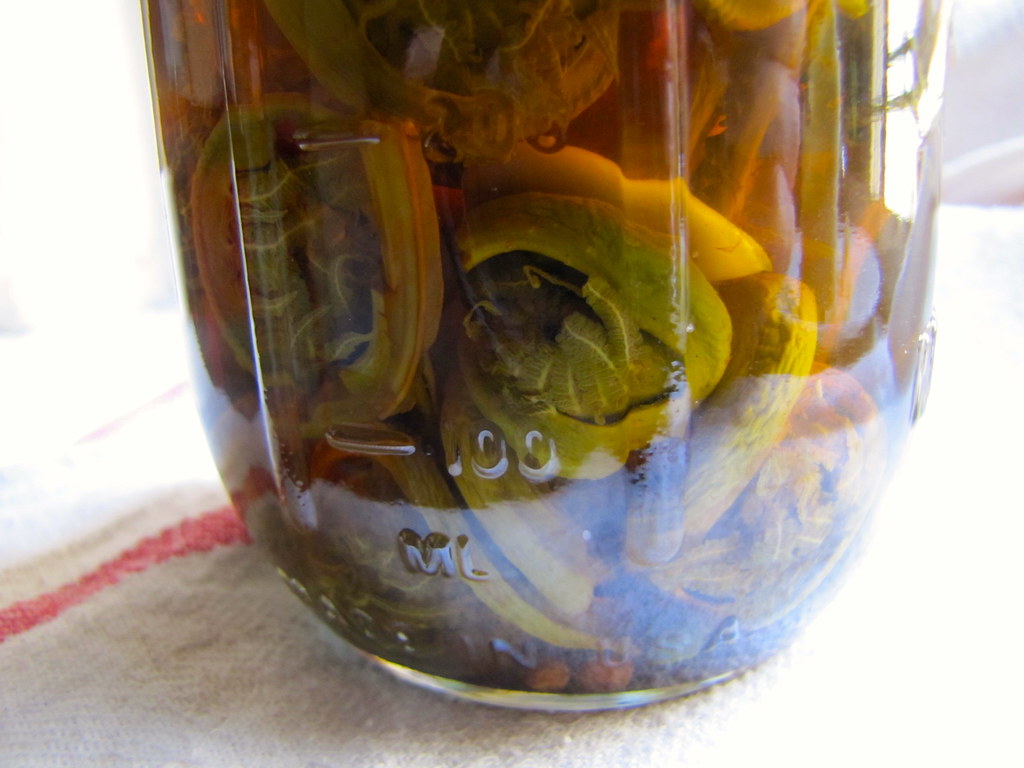 the finished jar, post-processing in a red wine vinegar-based brine


That’s where I am now, thinking of all the sandwiches and salads that I could sprinkle these pickles on. I’ll probably wait at least until the summer, when fiddlehead ferns are no longer to be found.

Place the mason jar and its lid in a pot of enough boiling water to completely submerge. Let boil submerged for 10-15 minutes to sanitize. Remove carefully with tongs. Keep the pot of hot water to use for processing soon.

Bring a small pot of water to a boil and drop in the fiddlehead ferns. Let boil for 10 minutes, or until completely softened and tender. Drain and rinse the fiddleheads with cold water. Place into the sanitized mason jar along with the garlic cloves.

Bring the vinegar, 1/2 cup water, salt and peppercorns to a boil in a small pot. Stir until salt is thoroughly dissolved. Pour boiling-hot mixture into the mason jar until filled to a tiny fraction of an inch to the top. Screw on lid tightly. Place the entire jar, standing upright, in a pot of enough boiling water to reach about 3/4 of its height. (Don’t submerge the jar.) Let it boil for 10 minutes to “process” the jar. Remove carefully with tongs and set out to cool. Once the jar’s lid sucks in so that it can no longer be pressed in the center downward, it’s sealed. Store at room temperature away from sunlight (like in a cupboard). Refrigerate after opening the jar.

Four brownie points: Assuming you don’t get botulism (by not properly processing the jar so it never seals in), this is a delightful pickle with health benefits. (Sorry if that was scary, as well as the poisonous fern-mentioning part above.) Fiddlehead ferns are naturally rich in antioxidants, and they’re also unique amongst most plants for providing omega-3 and omega-6 fatty acids. However, pickling them in a high-sodium solution (albeit necessary for preserving) will render them very salty, so not something you want to eat in mass quantity anyway.

Eight maple leaves: The wild-foraged seasonal treats are one major advantage that small farmers such as those selling at their farmers market stands has against big-ag competitors, such as at the conventional grocery store. Here they’ve foraged for these rare specialties, and here you can only get them, lest you go plucking yourself. Give props and enjoy them while in season.