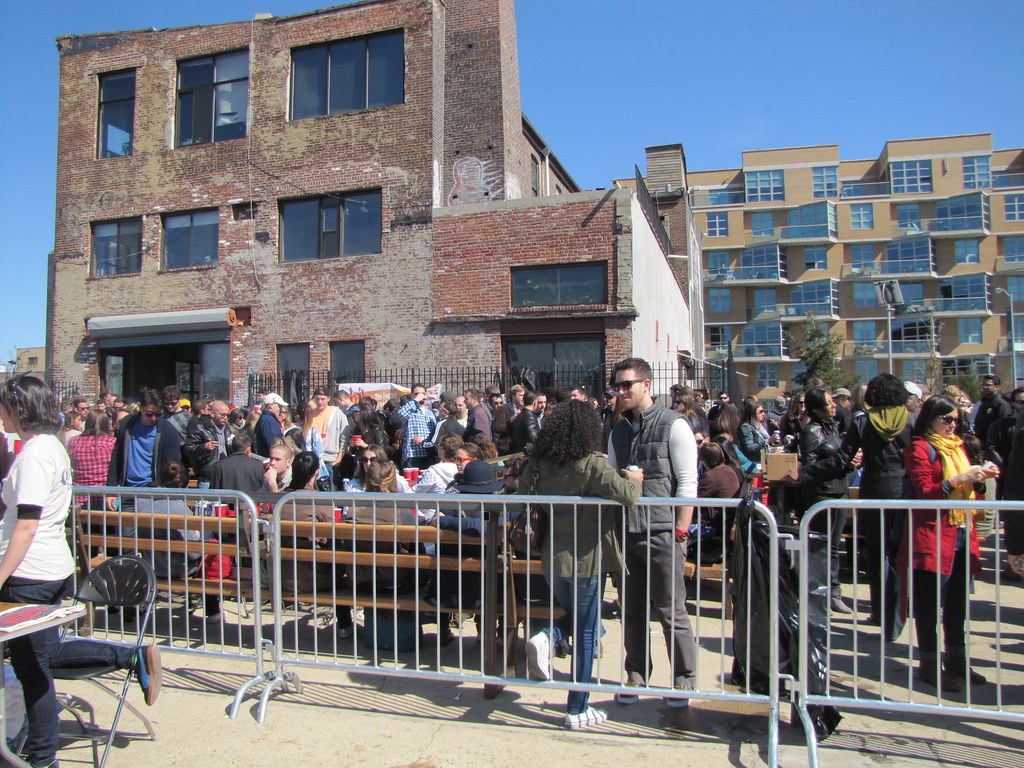 I’m suffering from a slight sunburn today, but it pales in comparison to the burning sensations experienced at the first-ever NYC Hot Sauce Expo yesterday. Held over a two-day weekend at the East River Park in Williamsburg, Brooklyn, the show featured dozens of small-batch hot sauce makers from around the country. The outdoor event spanned the public park, just across the river from Manhattan’s skyline, on an especially sunny spring day. Other participating vendors offered craft beers, vodka for Bloody Marys, grilled cheese, biscuits and chicken nuggets to soak up the sauce.

If spice is your sauce, there were a lot of artisanal bottles to explore. There were vendors who’d come to New York all the way from Dallas to Vermont. I have to say that one of the most interesting things about the expo was seeing all the different labels people designed for their hot sauce bottles. There seemed to be a noticeable exclamation point to each label – with colors, crazy fonts, animal mascots, and badass words like, “rippin’,” “torchbearer” and “puckerbutt” – as if the pepper burn itself weren’t enough to kick you in the a$#. Luckily, this was a tasting event, so we got to taste as well as see every sauce on display, and chat up the makers themselves at their stands. 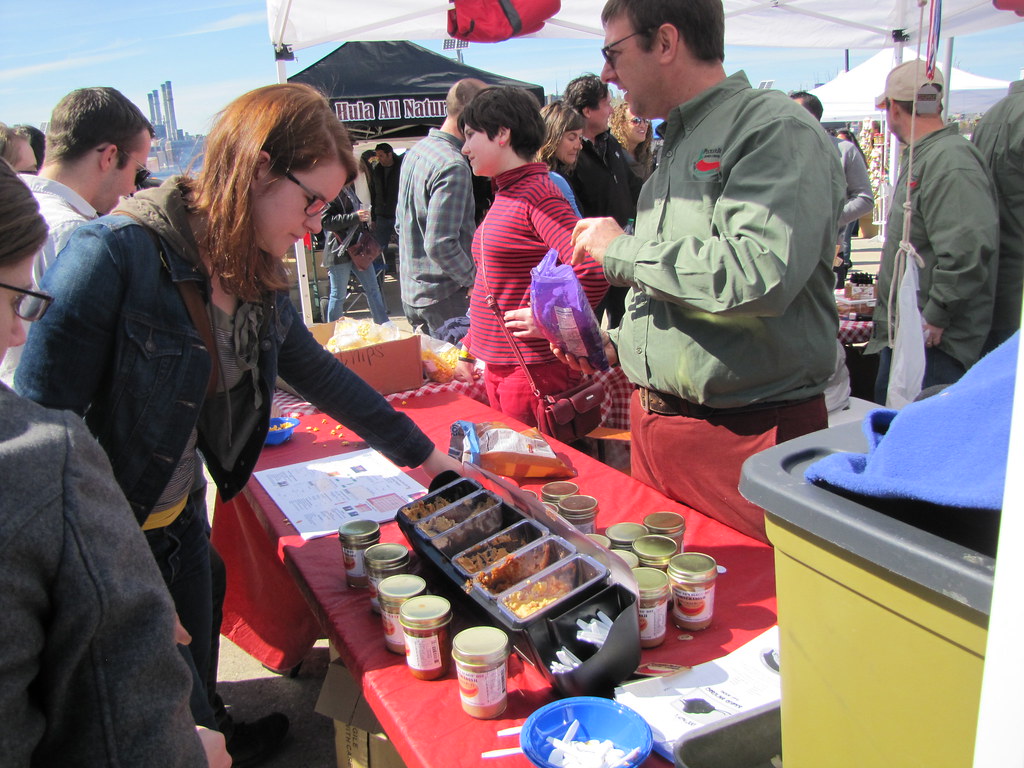 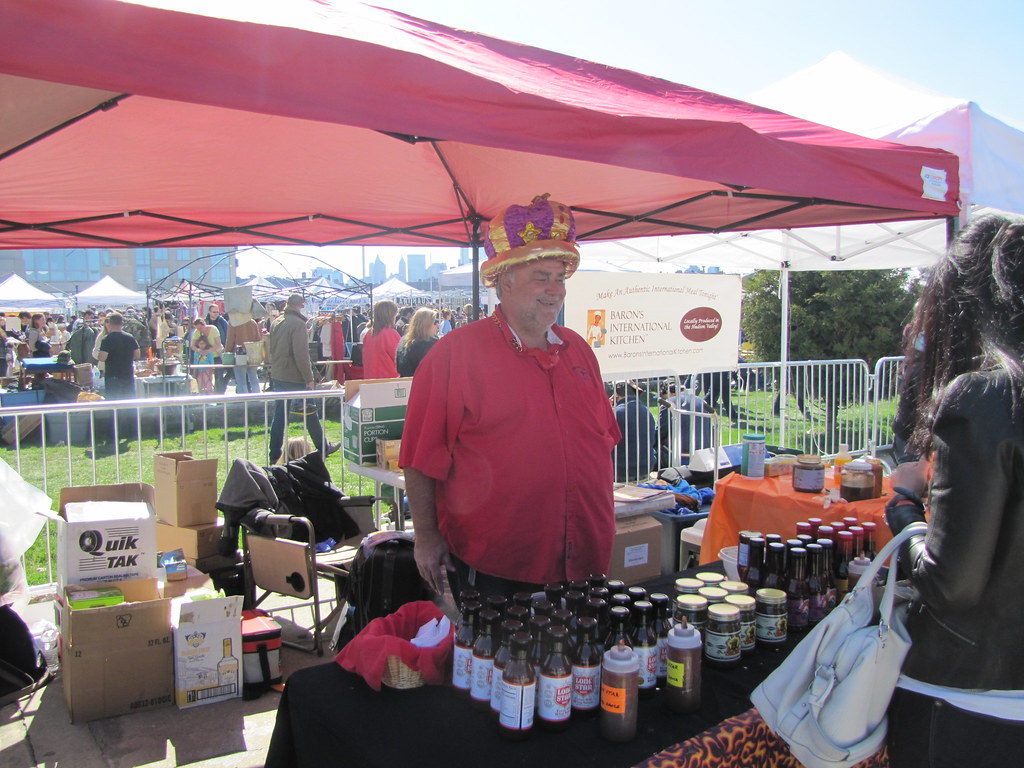 I was surprised to find five local New York City-based hot sauce brands at the expo: NYC Hot Sauce Co., A&B American Style, David Rosengarten Selection, Pinata, and Guyank. Walking through the rows of tents, I tried them all, along with many other companies’ along the way. At NYC Hot Sauce Co., owned by a Texas native food enthusiast, I even got to try his new experiment of dried-out pepper pulp post-straining for the sauce. This, blended with some sea salt, resulted in a tasty spice blend or rub. I was impressed to hear that both this company and A&B American Style sourced many of their vegetables from Brooklyn Grange rooftop farm during its growing season, too. 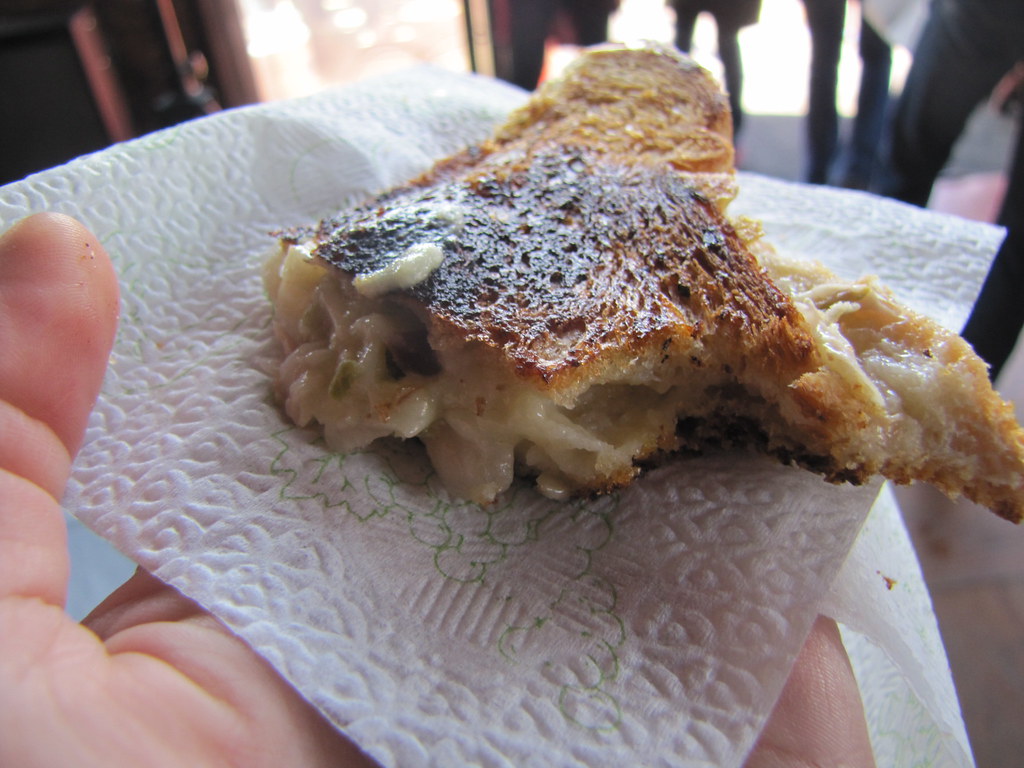 grilled cheese to soothe the burn 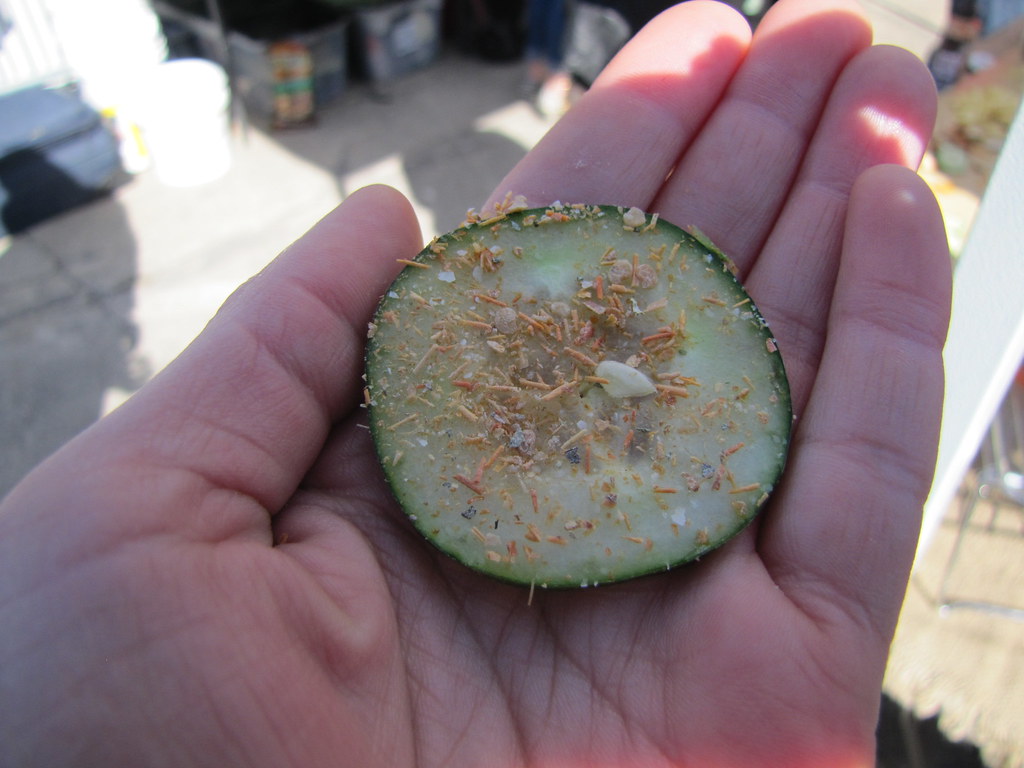 
The hot sauce vendors were all competing in several categories of judging for awards at the expo, for instance, for “Habanero based” sauces, “Louisiana style” sauces, “Pepper blend,” “Chipotle” or “Fruit-based.” There were many categories and many happy winners by the end of the day. I didn’t get to extract all the info on who won what, however, because of what happened to me next (read on). Check the official website for updates to see if your favorite sauce took home honors.

I was tasting some wing sauce out of a plastic spoon when my palate began to panic a bit. Each consecutive hot sauce that I’d tasted grew with a cumulative effect of searing my tongue. I wandered to the beer garden, and there found a few friends of mine standing around – Mary from My Life on Craft and Dave, a chef and oyster shucker at Jimmy’s No. 43. I got myself a cup of Coney Island pilsner and tried to soften my tongue on its foam. But because I was visibly suffering, Dave offered to grab some milk from his fridge nearby, and before I could protest, he was back with a whole pint of whole milk. I downed it, and immediately began to feel much better. I returned to the beer.

I was just about fully recovered when my friend Matt Timms, founder of The Takedowns and a special judge at the event’s Bloody Mary competition tapped me on the shoulder. He held out a palm full of something golden and sparkling in the sun. “Try this peanut brittle. It’s really spicy,” he warned. 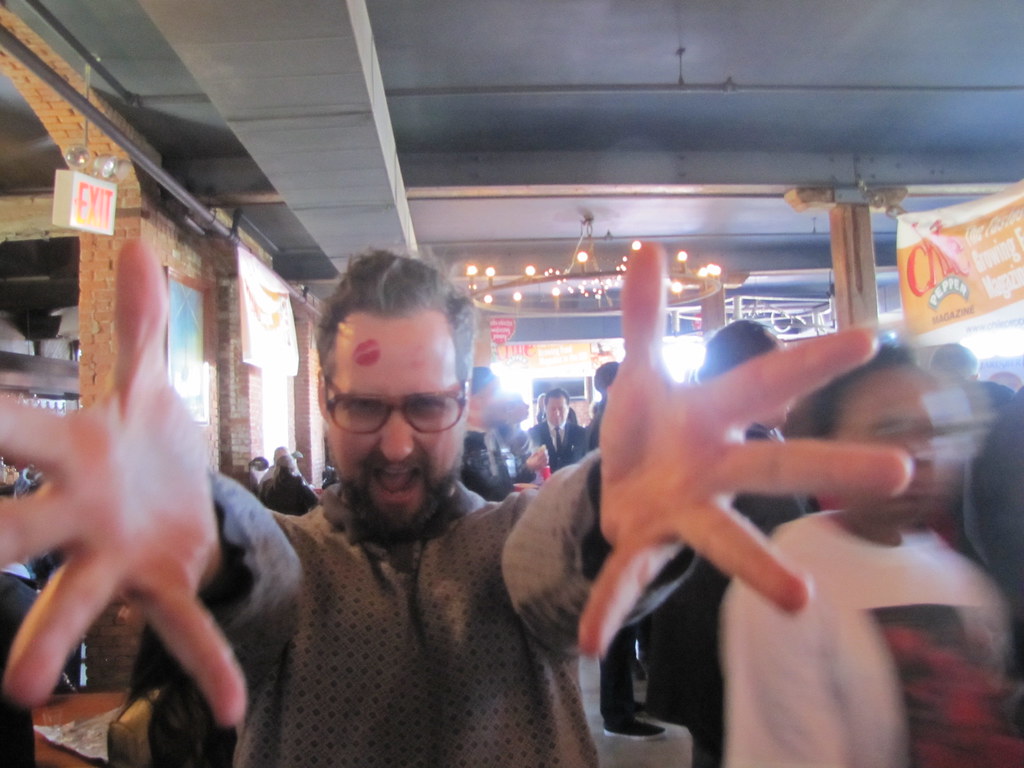 
I took a big piece and chewed a moment. The pleasure lasted about one and a half seconds. I held out my palm to share the peanut brittle with my other friends but before they could grab any, I doubled over with a coughing fit. Some sort of dry, gasping sensation had hit me in the back of my throat. To prolong the burn, the candy had glued to my molars so that when I tried to swab it free with my tongue, it spread another streak of pain throughout my mouth. Once the coughing had stopped, I rightened myself and tried to see straight. My milk cup had a tiny drop left in it, which I tried to “milk” for what it was worth. But my mouth was still burning. My nose began running. My forehead began sweating. I ducked indoors, leaving my friends and beer abruptly behind, in search of something to relieve my slack-jawed mouth with. I grabbed a cube of Jarlsberg cheese, placed out on a tray next to toothpicks for sampling. I couldn’t taste anything as my teeth crumbled the curds hastily. I grabbed a bottle of water next, and a tissue. I waited for the ache to lessen, finding myself for a moment of blurry vision in a line for the ladies’ room and deciding that I’d better stay there. It took another ten minutes or so to regain composure, and blot my tearing eyes dry. I later learned from Matt that the culprit candy was something called “peanut brootal,” although I still don’t know the psychopath who made it. 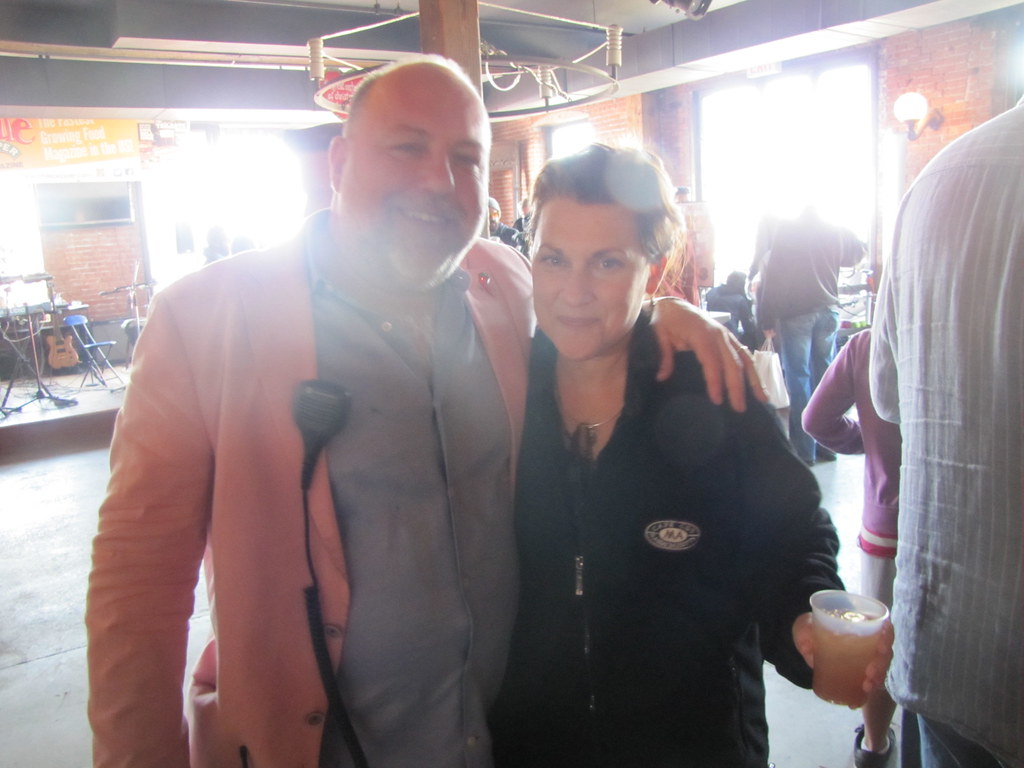 
So yeah, the NYC Hot Sauce Expo was everything that it should and could be, in my opinion. And judging from the  great crowd that turned out for it, and all the many hot sauces yet to make their pilgrimage here, I think it’s only the beginning of defining all that. Who knew New York could be the next destination for hot sauce? I say let’s fire it up again next year. And one suggestion: perhaps set up a “milk bar” in addition to beer.