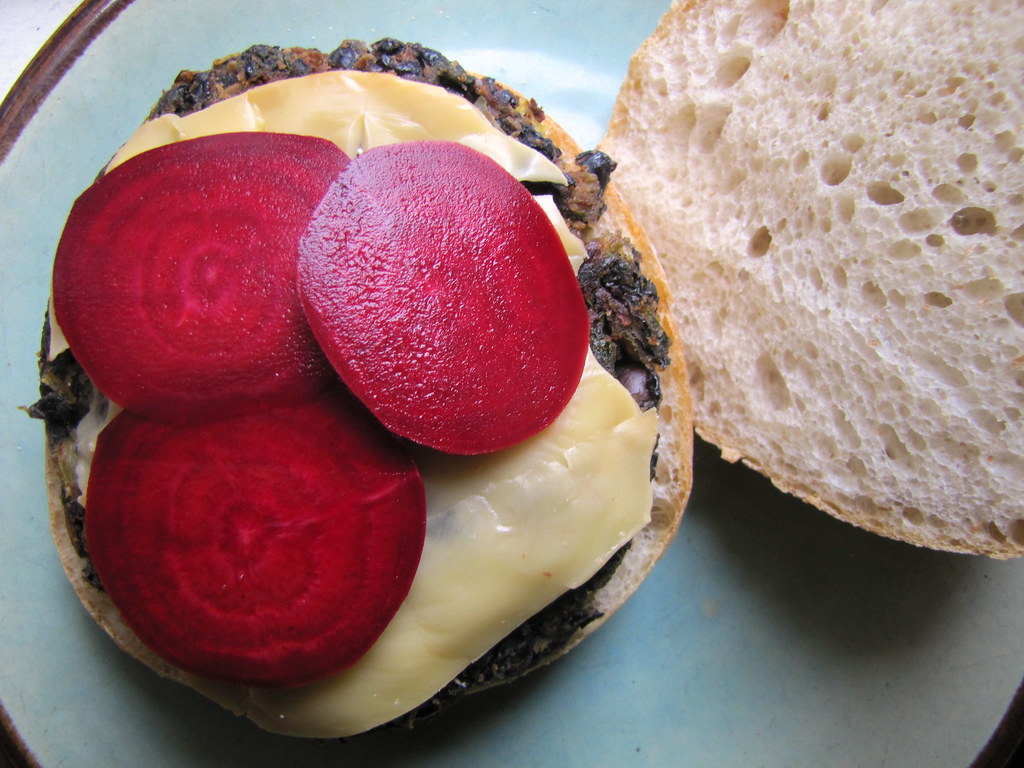 I have been seriously craving hamburgers lately. Not the cutely compressed, miniature snack-cum-calorie-whoppers wrapped in grease-blotched paper, but the mean, towering, impressive type stuffed with fixins’ that might come with a steak knife at the side. Oddly, though, I was craving the whole big sandwich affair more so than meat, and wondered if that could be sated without.


I see the term “veggie burger” as a broad, open canvas to fill in with whatever ingredients that simply aren’t meat. I think there should be some proteins in it, as the patty is meant to function as that portion of one’s diet. So I went with black beans as its main component, which, once fully cooked, slightly mashed, and browned on a pan, have a darkish cast more resembling true hamburgers than other beans. 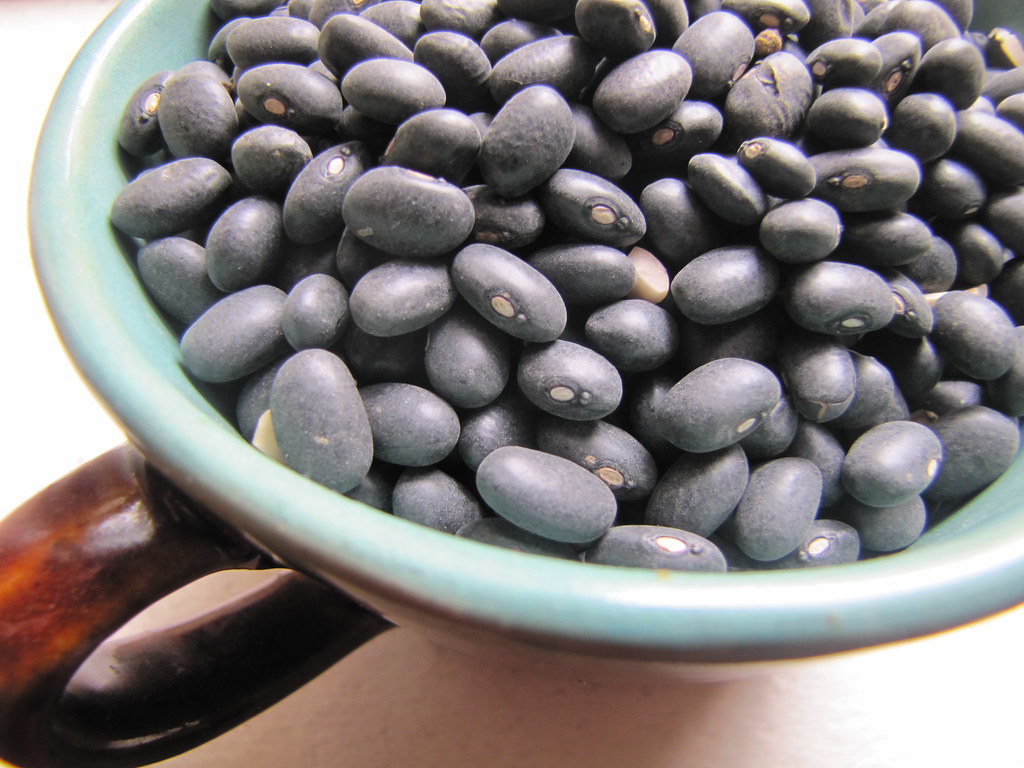 I have no illusions about a black bean-studded “veggie” burger satisfying just like a juicy, beef burger. I think that’s an improper assessment of the goal of making a veggie burger, and sure to lead to some disappointment. For me, this was about making a robust and tasty sandwich, with some of my favorite components. And I happen to really like black beans, just for what they are — who doesn’t? Hearty, creamy and filling, they go exceptionally well with a few simple seasonings, and a variety of vegetables. 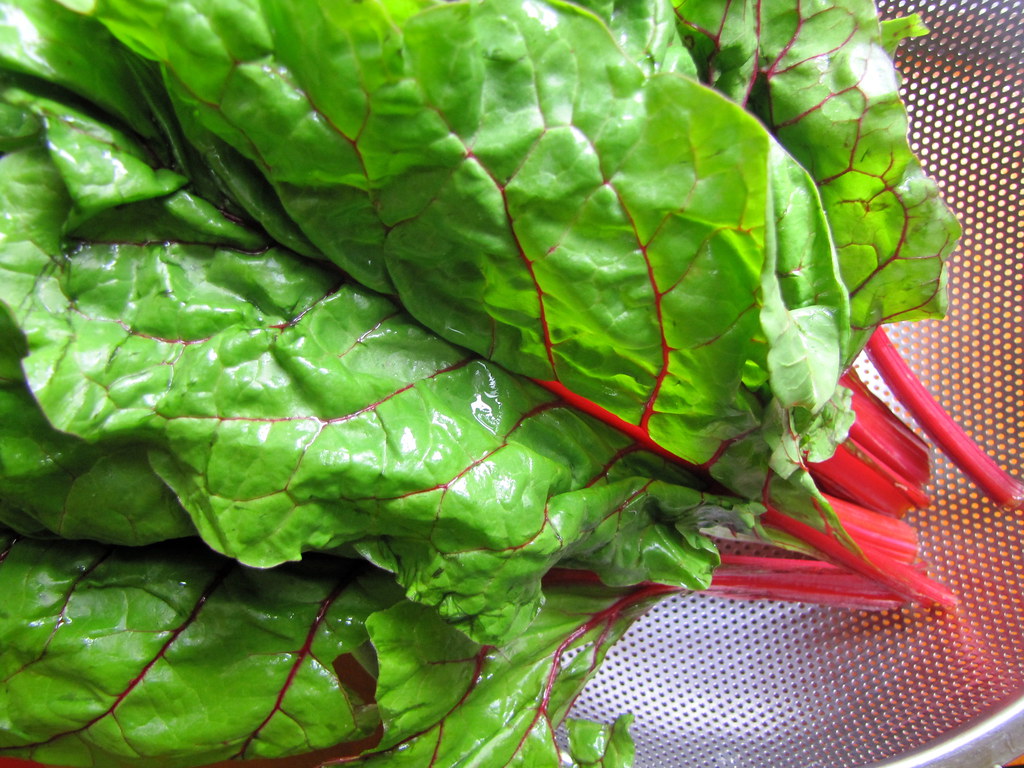 This is where the next main component of this burger comes in: sauteed greens, packed in there, along with some leeks. I thought this would lend texture to the patty, as well as ample nutritional benefit. Yes, rather than some sad leaf of lettuce inside the bun, or a tiny, baby greens side salad next the burger, this veggie burger patty encompasses about one fourth of a bunch of Swiss chard itself. (You might try the same with other mild-tasting greens like spinach or kale.) The red Swiss chard with its bright, tiny chunks of stem also brought dimensions of color to this meal. Sure, you could sautee a lot of Swiss chard to place in between the patty and bun, but I feared that the stringy bits would get stuck in my teeth this way, or else fall out of the burger for the most part. 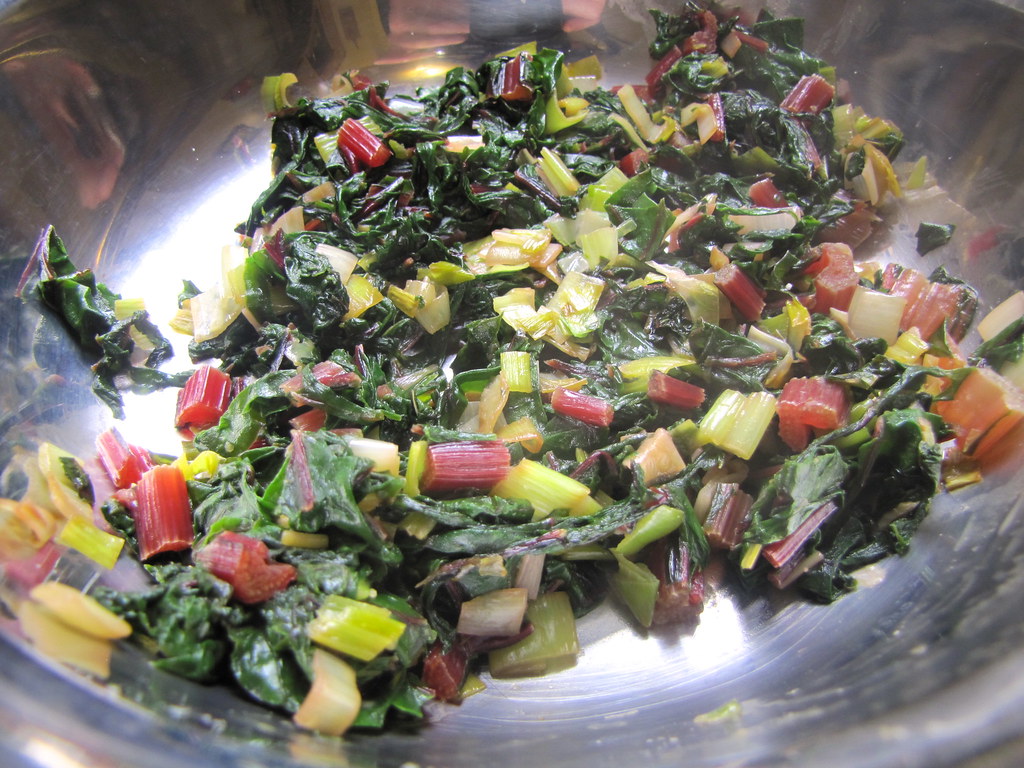 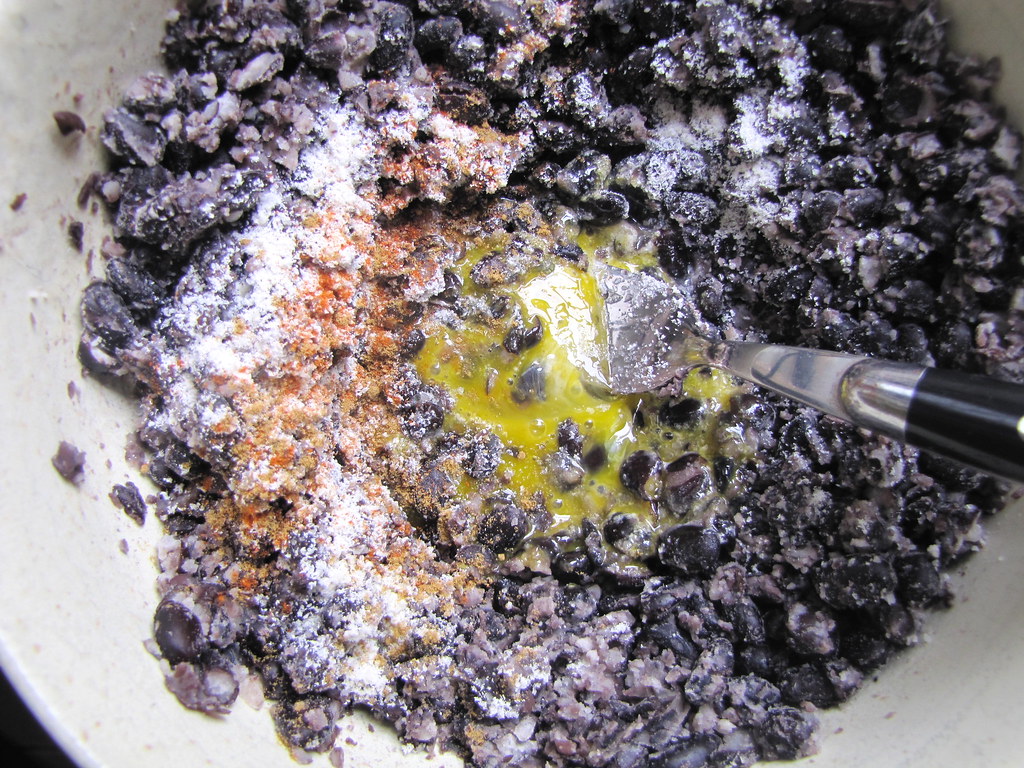 I was surprised by how much Swiss chard I was able to fold into the cooked beans and still keep it malleable enough to form into balls. To help out with this considerably, I employed nature’s best binding agent: a single egg, beaten to spread throughout. This made the lightly mashed beans much stickier, and eventually hold together once the egg cooks through. You’ll want to sautee your greens and leeks until they’re completely dry, as extra moisture will weaken this bind. Also, cool off the beans once they’re fully cooked until there’s no more steam or liquid hiding at the bottom of the bowl. 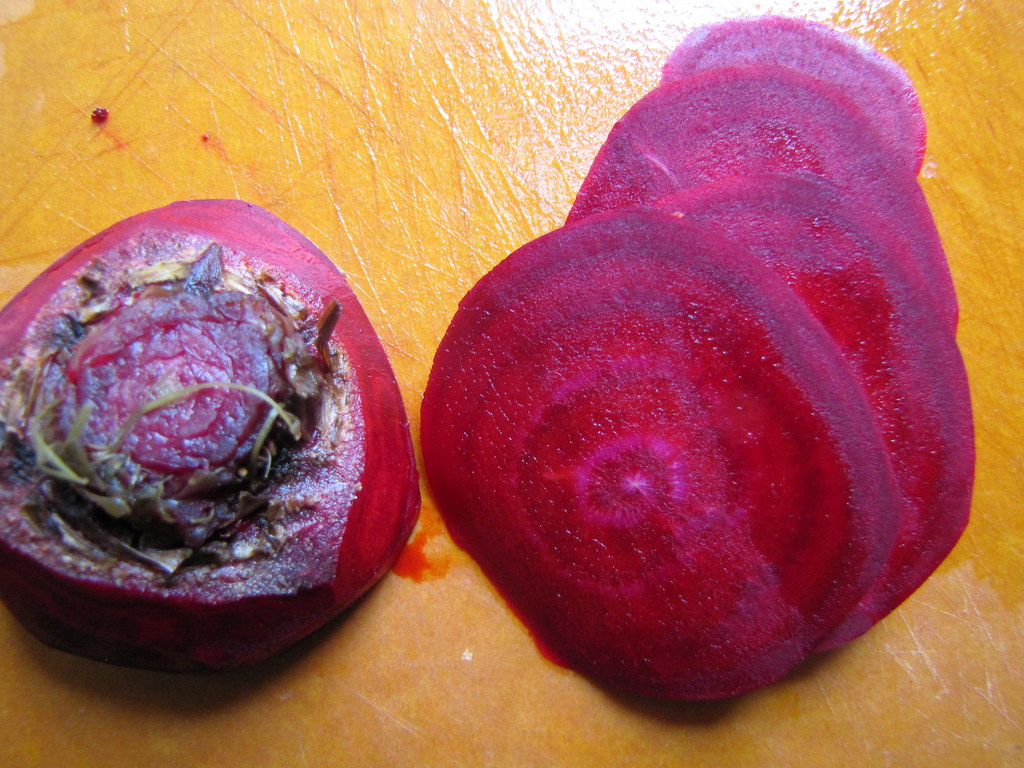 Finally, it’s time for some fixins’. Since it’s winter, we don’t have ruby-red rounds of tomato in season around here. However, we do have crunchy, deep fuchsia beets, and these can be made pucker-worthy by quick-pickling in vinegar for a bit. No need to even cook the beet first; just peel off its dull skin and give it a good slice. Thick or thin, it’s up to you, but the thinner you slice, the less time the beets will need to absorb the flavors of your brine. Because I’d added a pinch of cumin and cayenne pepper to the bean patty mixture, I thought that a smokey-tasting cheese would be a great complement here. Going on this hunch, I melted a swatch of smoked gouda on top of the newly browned patty on the pan. 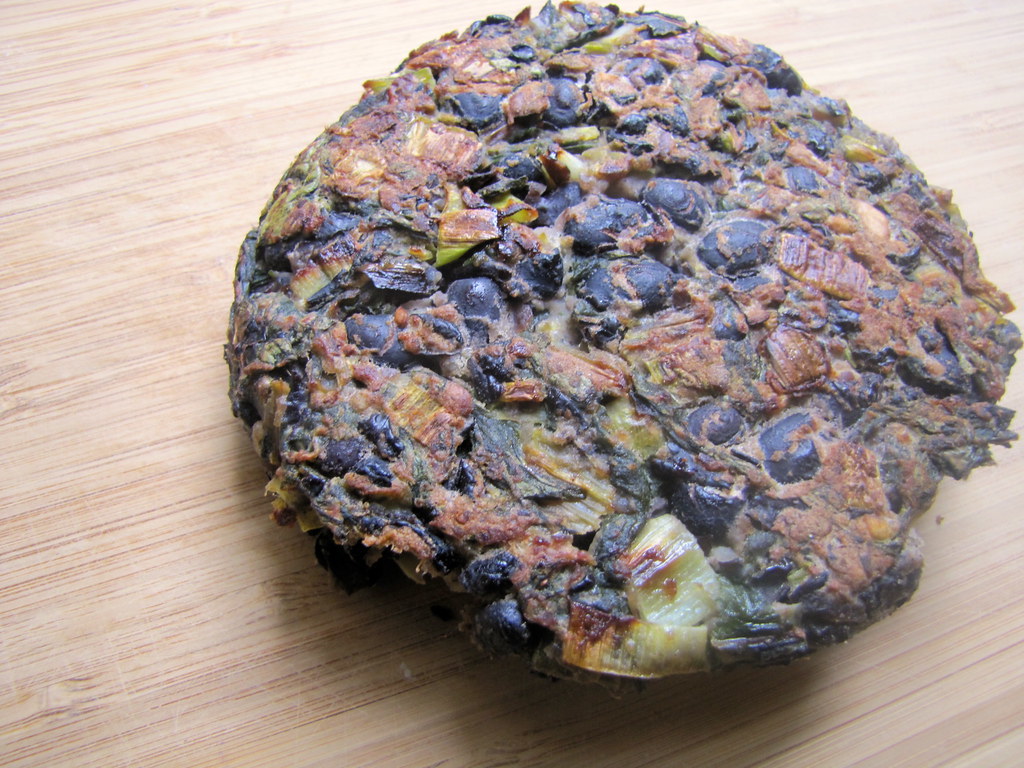 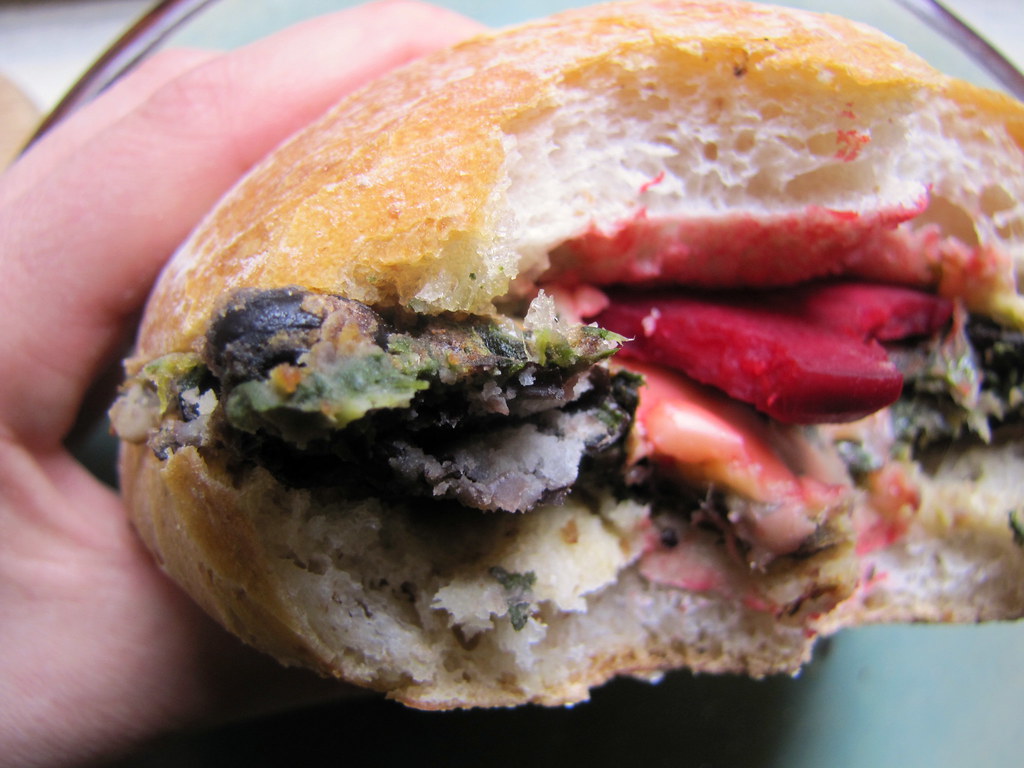 It’s funny how you can think you’re craving only a certain food, then be even more delighted by an entirely new sensation altogether. I think I’m going to be craving these black bean and Swiss chard burgers many times after this meal… then make instead who knows what?

Drain the soaked beans and fill with cold water to cover by 2 inches. Bring just to a boil, then reduce to a simmer. Cover and cook until beans are tender, about 1 hour. Check to add more water if beans are no longer submerged. Drain cooked beans thoroughly and let air-dry at least 15 minutes.

Meanwhile, combine the vinegar, water, salt and sugar in a small bowl and stir to dissolve. Submerge the beet slices in the mixture, cover, and chill for at least 30 minutes.

Heat a tablespoon of the olive oil on a saute pan and cook the leeks over medium heat, stirring occasionally and seasoning with a pinch of salt and pepper, until softened and translucent, about 5 minutes. Add the garlic and the shredded Swiss chard, along with another pinch of salt and pepper. Cook, stirring occasionally, until all moisture from the chard has evaporated, about 5-6 minutes.

Slightly mash the cooked beans with a fork in a large mixing bowl. (You can mash it more thoroughly for a more even, creamy consistency or just slightly for a chunkier, bean-ier consistency.) Stir in the beaten egg, salt, pepper, optional spices and grated cheese. Stir in the cooked and cooled Swiss chard and leek mixture. Combine with hands until thoroughly distributed. Form into four patties.

Preheat oven to 350 degrees. Heat a heavy-bottomed, oven-safe pan over medium and coat the bottom thoroughly with about 2 tablespoons of olive oil. Place down the patties. Don’t move for 1-2 minutes, then push them around a bit to make sure they aren’t sticking to the bottom of the pan. (Add some more oil if necessary.) After another couple minutes, carefully flip the patties. Let brown on the opposite sides another 1-2 minutes, and add the slices of cheese to the tops. Shake them around again to make sure they aren’t sticking to the pan. Transfer to the oven to cook another 8-10 minutes, to cook them through and melt the cheese.

Serve the burgers in each roll with the pickled beets.

Three brownie points: Oh, guiltless pleasures. This burger makes a great case for going meatless with its heart-healthy plant protein and fiber from the beans, and its richness of vitamins from the greens and pickled beets. You could do better than a refined flour bun for the starches, though, which is sure to fill you up fast and make your energy crash rather than more nutritious whole grains. And the cheese does add cholesterol and calories here, though it’s much better than being melted on more of that (meat).

Six maple leaves: In anticipation of spring, I sprung for some out-of-season leafy greens from the conventional supermarket. I just couldn’t find much of an appetite for the slightly wilted, sad-looking kale that was still at the local farmers market. Fortunately, the beans are in season all year round, and grown in Upstate New York too, when found from Cayuga Organics’ farmers market stand. The rolls were also made by a local bakery at the Greenmarket that day, and the beets perfectly in season and organic, too.