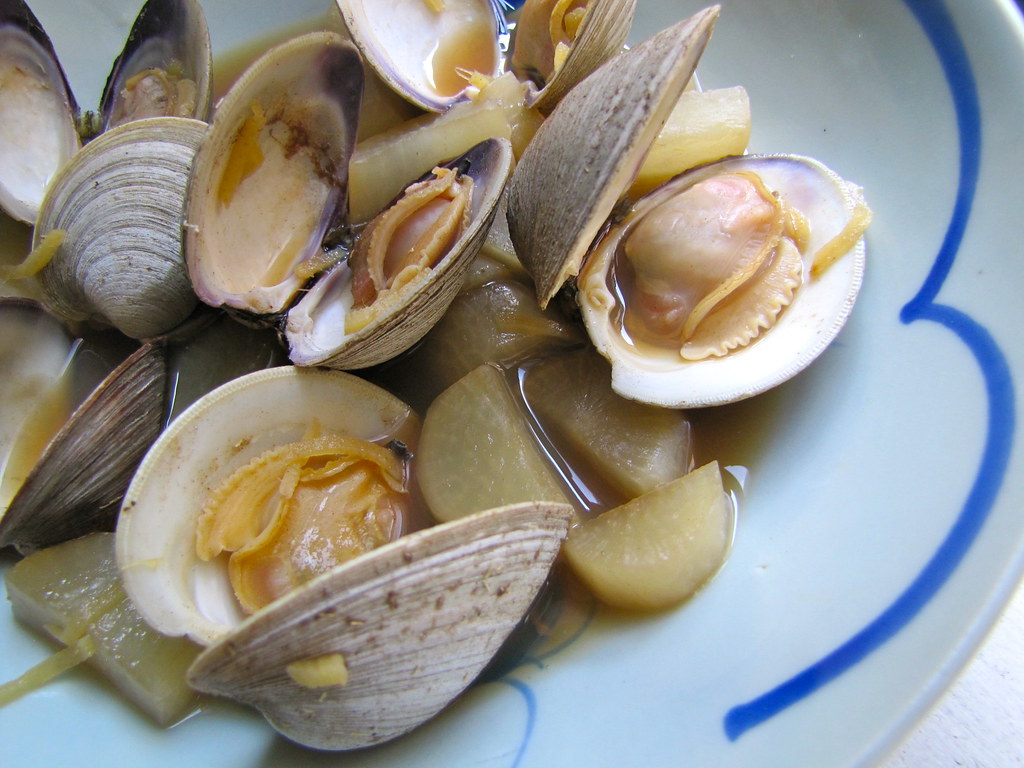 Just because the holiday season is officially over doesn’t mean cooking has to return to a boring routine. I’ve resolved to cook more under-explored foods this year, and stood at the seafood stand at the market for about five seconds before deciding on clams. Why? Because they — like daikon radishes, which were also snatched from a nearby market bin — are quick and easy to cook, flavorful, healthy, sustainable, and very inexpensive to boot. Hm, I guess that’s not such a new resolution for me after all.

It’s fascinating to see the rise of daikon radishes amongst small farms that grow it and places that sell it. Just a few years ago, if one wanted to find the elephant tusk-sized roots, you’d have to say, “forget it, Jake, it’s Chinatown.” And because whenever I did go shopping in Chinatown, or Asian groceries around town, I was usually looking for something specific (like noodles or wonton skins) but emerge with an armload of other things, I never felt much inclined to schlep a bloated root vegetable along, too. Nor were they too attractive compared with the fresh, local, and for some reason smaller ones I’ve been finding at the Greenmarket from the late summers on. 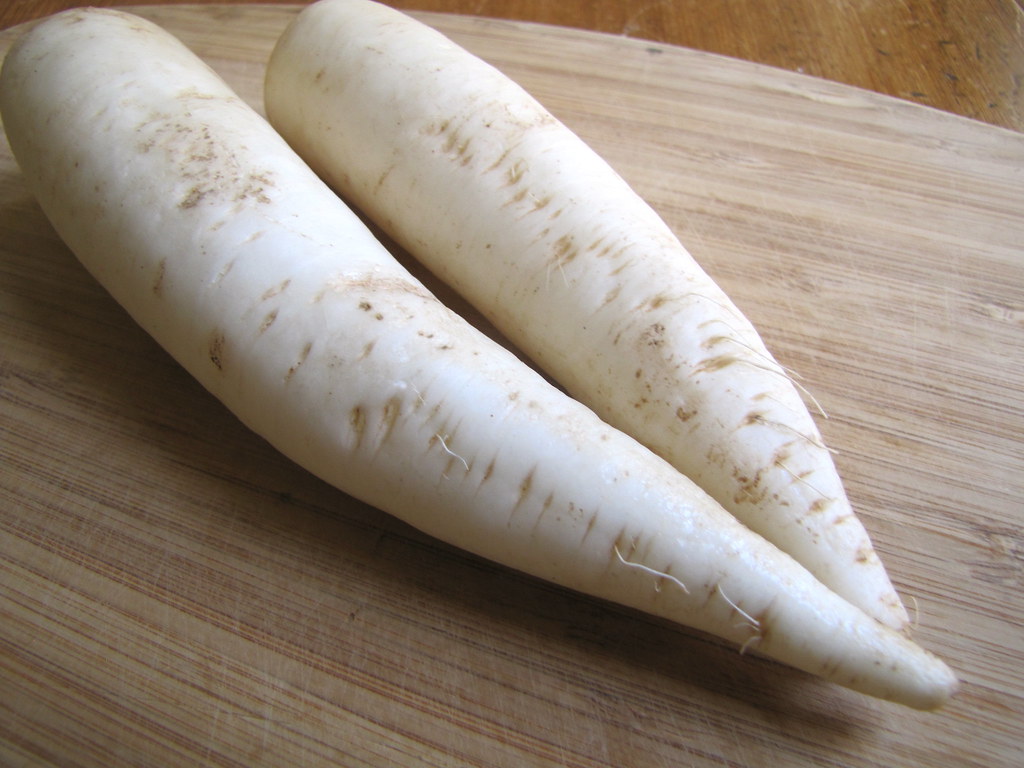 
How do you cook a daikon radish? Well, you could pickle it or shred it fresh, like any radish. But the best characters in the daikon radish come out when it’s gently boiled, simmered or braised, with a touch of flavor. The meat becomes soft, watery sponges and its slightly funky flavor transforms into an earthy savoriness. I’ve explored less-traditional ways of cooking the radishes before (like searing the chopped roots and making pasta with their greens), but the simplest, homespun Asian way of preparing the winter vegetable is in a warm, soupy broth of some sort. 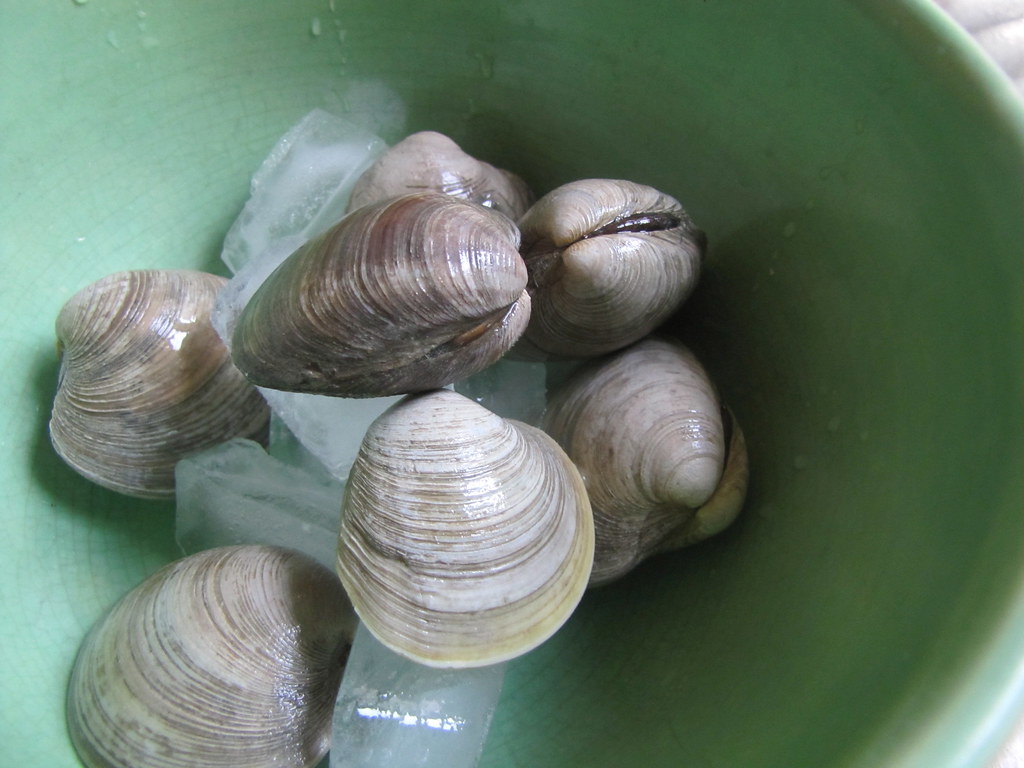 
Rather than looking no further than dry white wine, fresh herbs, and maybe a little butter to cook the clams in, I went with an Eastern theme, inspired by the daikon. Let’s go with sake, the Japanese rice wine, and some julienned ginger instead. First, the daikon would be simmered in a light broth with ginger (I’ve recommended dashi, or “sea stock,” but you can substitute chicken stock, or even just water), then the sake added and brought to a boil, followed by the clams. A touch of soy sauce lends flavor and warm color in place of pinches of salt. It’s an easy as one-two-three recipe, and you can serve it with steamed rice for a simple meal on its own. 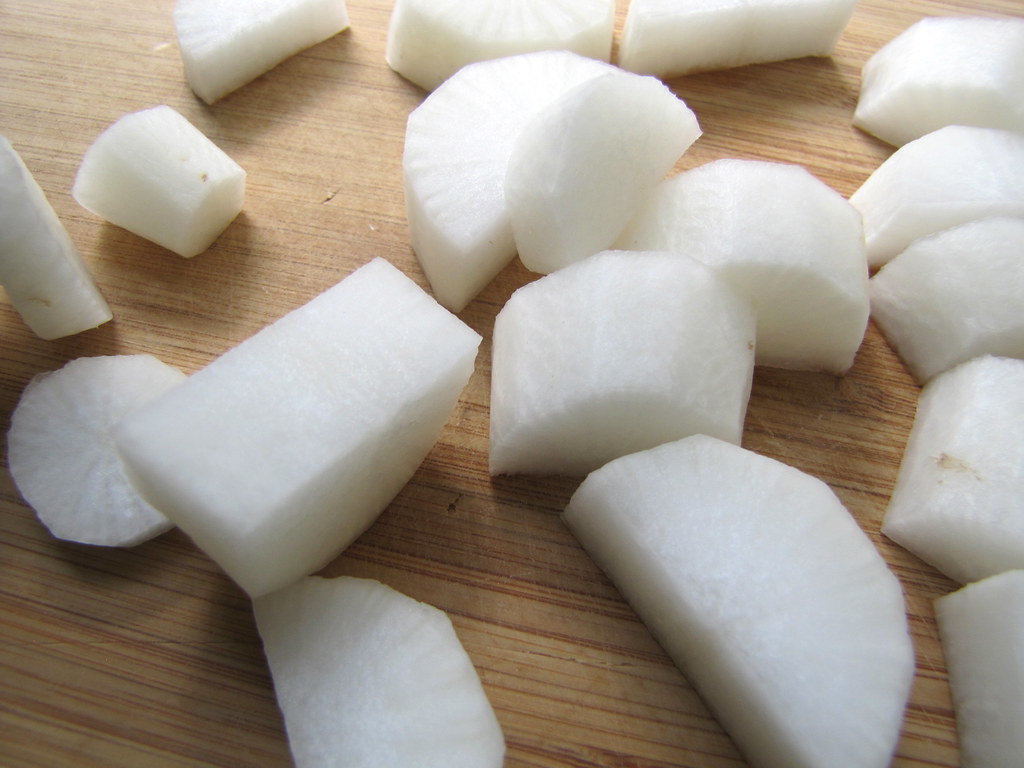 So here’s to a more adventurous year for cooking, while not having to put up much effort or time.

Rinse and scrub the clams, then submerge in a bowl of salted, cold water for 20-30 minutes. (This will draw out any sand or mud.) Drain and rinse the clams.

Place the daikon and ginger in a medium-sized pot and add the stock or water, and 1 teaspoon of the soy sauce (you can adjust and add more soy sauce to taste later). Bring just to a boil, then reduce to a simmer and cook, uncovered, until daikon pieces are translucent and tender, about 10 minutes. Bring back up to a boil and add the sake. Let it come up to a boil again, then add all the drained clams and cover the pot. Don’t peek for about 3 minutes, then peek inside. If all the clams are opened, remove from heat; if not, cover and let cook another couple minutes. Once clams are opened (discard any ones that simply don’t), taste for seasoning, adding another splash of soy sauce to the broth if desired, transfer to a serving dish and serve immediately.

Soak the kombu in 6 cups cold water for 15-30 minutes. Heat slowly over medium flame until just brought to a boil, then add the bonita flakes and remove from heat. Wait until the bonita flakes have all fallen to the bottom of the pot, about 5 minutes. Strain with a fine-mesh strainer lined with cheesecloth. Kombu can be reserved for a second use afterward in the refrigerator. Alternately, you can find instant dashi powder packets in Japanese groceries, which work like bouillion cubes.

Health Factor
Three brownie points: Japan boasts one of the healthiest cuisines in the world, and it’s partly due to its predilection toward steaming, simmering and simply boiling foods. This is a case in point, where there are no added fats in cooking a protein and a vegetable, and all their nutrients are retained in the savory broth. Not to mention that this protein and vegetable are very beneficial ones, indeed: clams are high in protein, iron, omega-3 fatty acids, and Vitamin B12, and low in toxicity compared to many other types of seafood. Daikon radishes are prized in Asia for their detoxifying benefits, and also provide fiber and potassium. A little ginger adds a spicy kick but is also known as a digestive aid. The only thing to be wary of is not adding too much sodium to this recipe, which can depend upon the stock you use; so go easy on the soy sauce and adjust for seasoning as you see fit.

Seven maple leaves: Farmed US clams are a “best-choice” seafood according to Monterey Bay Aquarium’s seafood watch program, and these traveled straight from the Long Island sound to NYC’s Greenmarket, supporting the local aquaculture, too. Daikon radishes are hardy root vegetables that store well and preserve well, as with winter cabbage, so they’re a great choice to get into this winter, when most vegetables are no longer around.