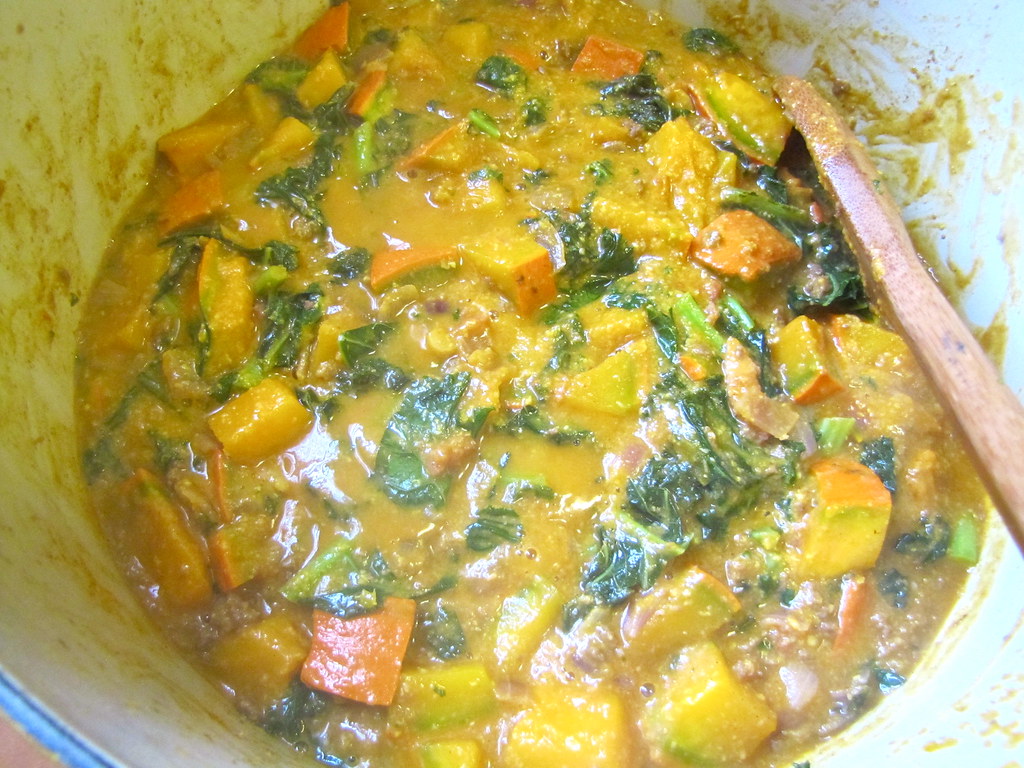 The morning after superstorm Sandy swept through New York City, and the damage was being surveyed, I got hit with a serious cooking bug. I’m sure I’m not the only one. The storm’s aftermath has put many people in this region in dire circumstances comparable to those during the Dust Storm, with basic necessities such as food and shelter compromised for the past week. I saw people with pitchers draining out their cars on the cold, damp streets in Red Hook and water being pumped out from basements while furniture and household items were tossed to the curb, ruined. I’m fortunate to live in an area of Brooklyn — or particular block — that was largely unaffected by the storm. So I searched my kitchen and came up with a huge pot of “chili,” or so I called it, with kale, winter squash and ground beef to feed my friends at a business in Red Hook that got flooded and its electricity cut.


Perhaps many of you have been thinking about helping out at shelters by bringing a large vat of something to serve to those less fortunate. There are many opportunities to help, from writing a check to the Red Cross to finding donation centers to following the patch at Occupy Sandy Relief. This post has taken a long time in the making, and it’s no longer a simple recipe post as I’d once planned (in the meantime, I’ve rounded up what effects Sandy had on local agriculture at Grist). Instead, here are some ways to help you figure out what to cook, how to cook lots of it, and how to serve it to your neighbors in need. For all us foodies and home-cooking obsessives out there with more reason than ever to give.

1. Don’t compose, compile. The last thing you want is individual containers to bring along for grains, sauces, salads, etc. If you can mix your meat and three into one easy, scoopable serving, then do it. Many dishes can fare with this well: hearty soups, casseroles, pastas, bread pudding, rice or noodle stir-fries, curries and other stews with big, chunky potatoes. Break some of these out of your culinary closet and make them shine rather than outdoing yourself with different components.

2. Don’t be afraid to add meat, but don’t disqualify veggies. In my experience volunteering at soup kitchens, people generally really appreciate some meat in their donated food. On the other hand, I’ve fed large numbers of people hearty vegetarian courses that were well-loved by all. Keep in mind you’re cooking to sustain and nourish people who are not sure when they’ll get their next meal; you want to pack as much energy, protein and nutrients into one punch but also create a sense of emotional sanctity and fulfillment. Even when used in small ratio (such as the ground beef that really plays backdrop to the squash and kale in this chili), the idea of a warm, meaty entree is very comforting, I think. There’s nothing wrong with making a 100% vegetarian bean casserole, for instance, in case there’s strict vegetarians on the receiving end. But I wouldn’t worry as much about this particular dietary restriction in times of crisis; most donated food in cans or other non-perishable forms are not meat nor fresh vegetables, so think about filling those holes however you can.

3. Salvage all parts of the plant or animal. This is not the time to be peeling the green skins off of asparagus shoots. Maybe that’s compulsory for your cooking routine anyway, but if your goal is to bulk up your dishes, think about ways to use pieces of ingredients otherwise saved for a later use (such as greens from radishes) all in the same dish. In this kale chili, for instance, the stems of the kale were stripped, but then finely chopped to toss into the pot along with the aromatics; they add fiber and are benign-tasting, yet add subtle bits of texture to the stew. Also, if using meat, save those bones and odd parts like the backs or wingtips of chicken to make stock with — this is handy for so many for-the-masses foods.

4. Make food that keeps, and keep it hot. Your dish should ideally become better in taste and appearance the longer it sits (i.e. a whole grain pilaf) rather than worse (i.e. a baby greens salad). If you’re making hot food, you’ll either have to bring along some equipment (crock pot, portable stovetop, etc.) to keep it that way, or get to your destination fast. I find that a heavy, cast-iron pot or Dutch oven with the lid closed keeps food hot for quite a while. Also, it’s reusable rather than disposable aluminum trays. So try to finish cooking as close to when you’re going to serve to conserve these extra resources — you may find you don’t need extra heating devices at all.

5. Improvise, invent, and expand your kitchen repertoire. Once again, the goal of making food for the masses is to make as much food as humanly possible. Period. You don’t want to show up with something delicious that only 20 people waiting on line get to try. That given, you will probably find yourself adding so many things to your pot that you’ll have invented something altogether new, unplanned, and unique — and that is your reward to take away from the experience. So make the best of your effort, and reap a great reward by not being afraid to improvise a lot in the kitchen. This kale and squash chili was only invented because I had kale and squash on hand (as the last few recipe posts on this blog can prove), some ground beef in the freezer, and a frozen quart of roasted tomato and corn soup from the summer. Never would I have thought to thaw it out into a big pot of bubbling chili before this experience. But it was really good, and now I’m all the richer, kitchen-wise, for finding it out.