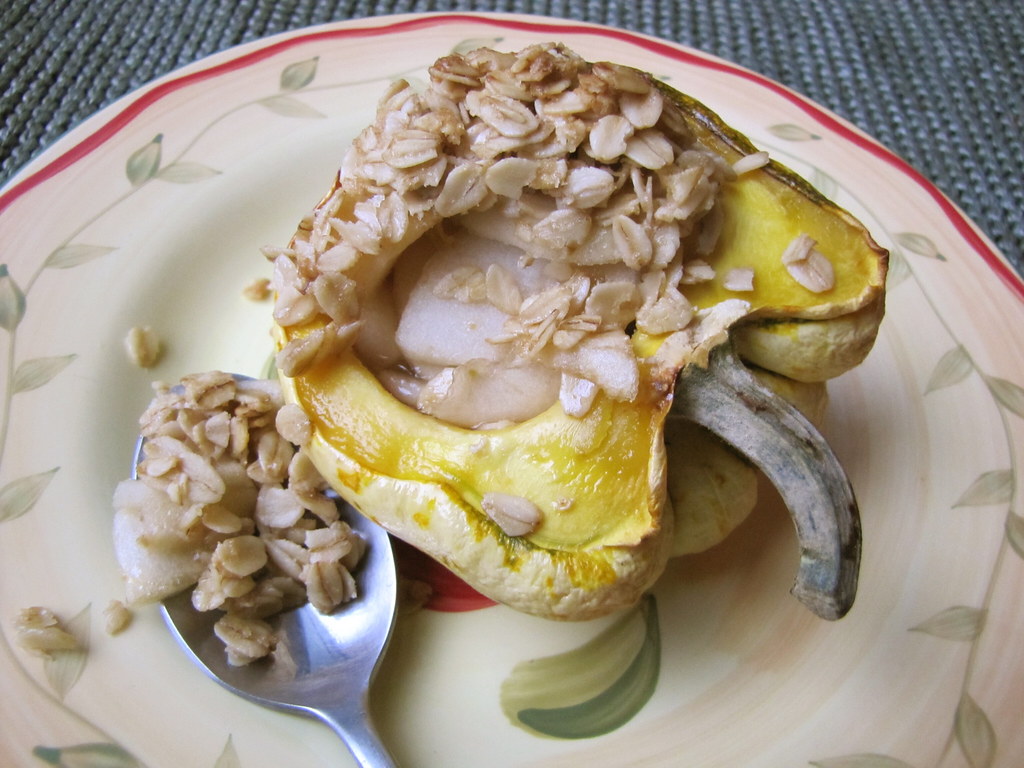 Now you can have your apple and pumpkin pie in one. The crust? The baked peel of a squash half holding it all, and a crunchy, oat-based crumble top. There’s no rolling, not much mixing, and not much peeling and chopping, either. And you might be inspired to stuff and bake more things inside hollowed miniature, less-conventional winter squashes, too.

Yes, you can eat these gourds — as cute or as dimpled and ugly as they come. Fortunately, I picked up a few that were more on the cute side, without warts. Here is a red kuri, a sugar dumpling, and a carnival squash. It was the sugar dumpling squash that I ultimately used in the recipe here, since it was the smallest one that I’d picked. But it was also the one that inspired me to do something with it sort of like its name implied. 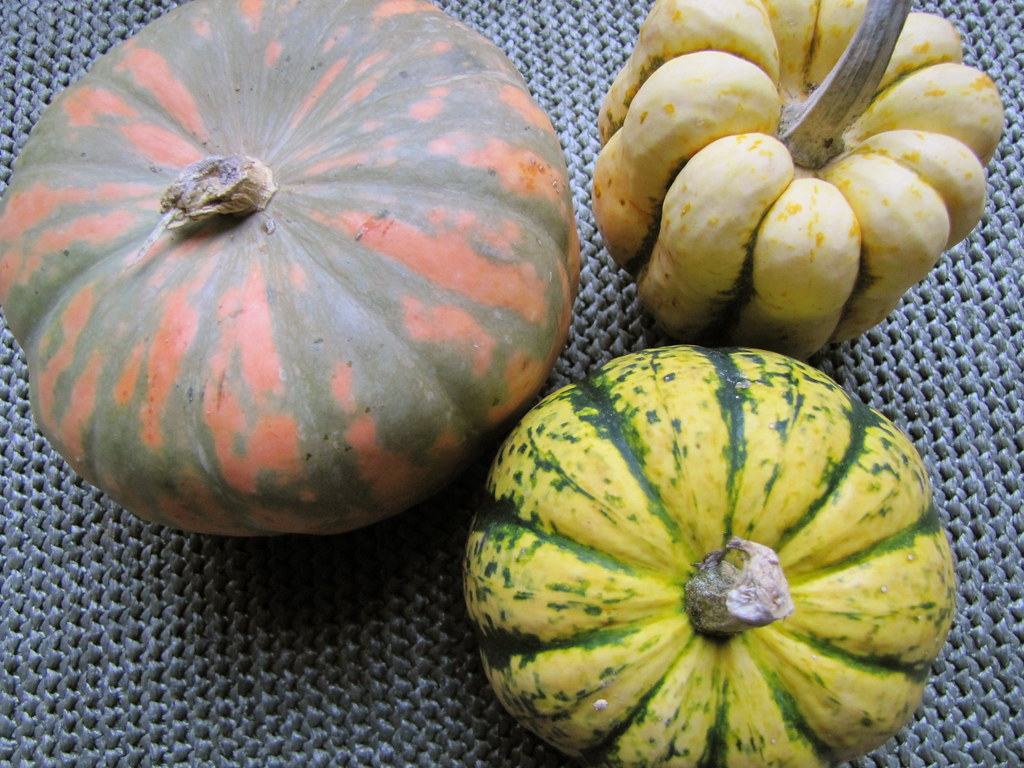 I’ve baked sweets, savory soups, and sweet-and-savory beans inside squashes before. So while enjoying the crisp apples the fall brought, I figured I’d bake some of those in one, too. The small, round shapes of winter squashes like sugar dumpling and carnival make for perfect individual portions of crisp. Don’t be shy if your squash is less than perfectly round, though — I though these sugar dumpling squashes would be a lot more awkward than they turned out. You can try it out with a hollowed sugar pumpkin, too, or go for a more oblong look if using a small, sweet delicata. 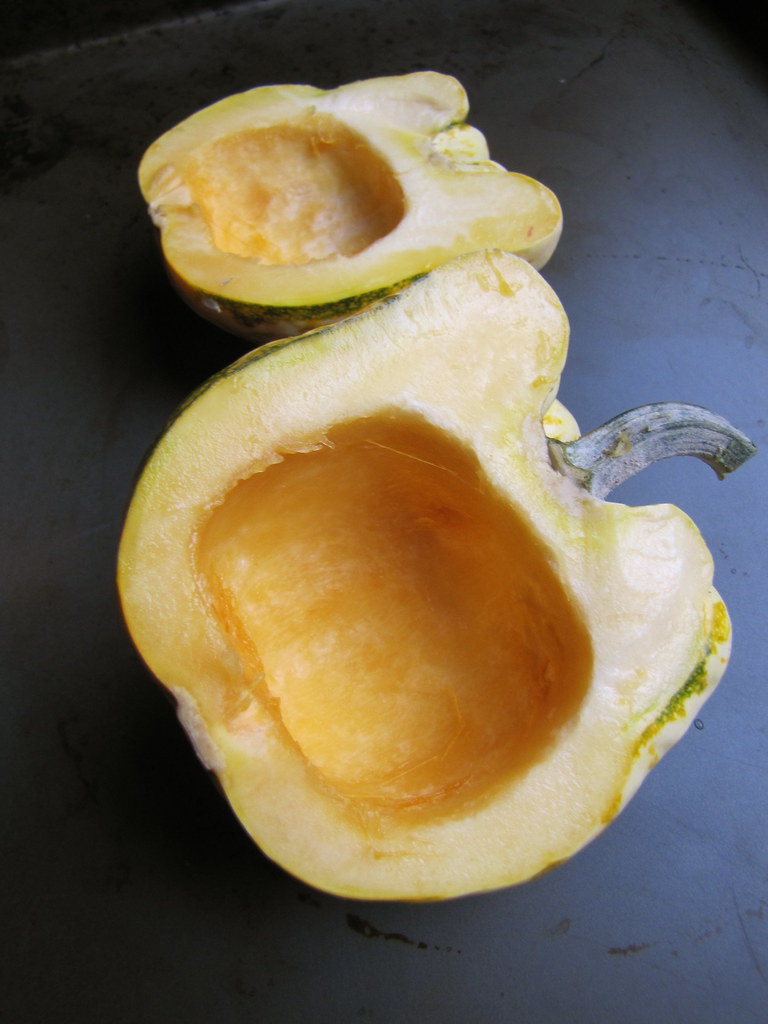 halved and scraped of its seeds

Before I go into how to make this apple crisp in a squash half — which is pretty much the explanation right there — a moment to reflect on why these squashes can be so tricky to find. To quell any concerns, these and other more “decorative” gourds are every bit a foodstuff as butternut squashes or pumpkins. But like so many varieties of produce, they weren’t favored for one reason or another when agriculture went industrial. Squashes are an especially various group, and some types are only common in certain cuisines, like kabocha in Japanese, or calabaza in Caribbean. They each have their nuances, which is fun to discover when cooking. 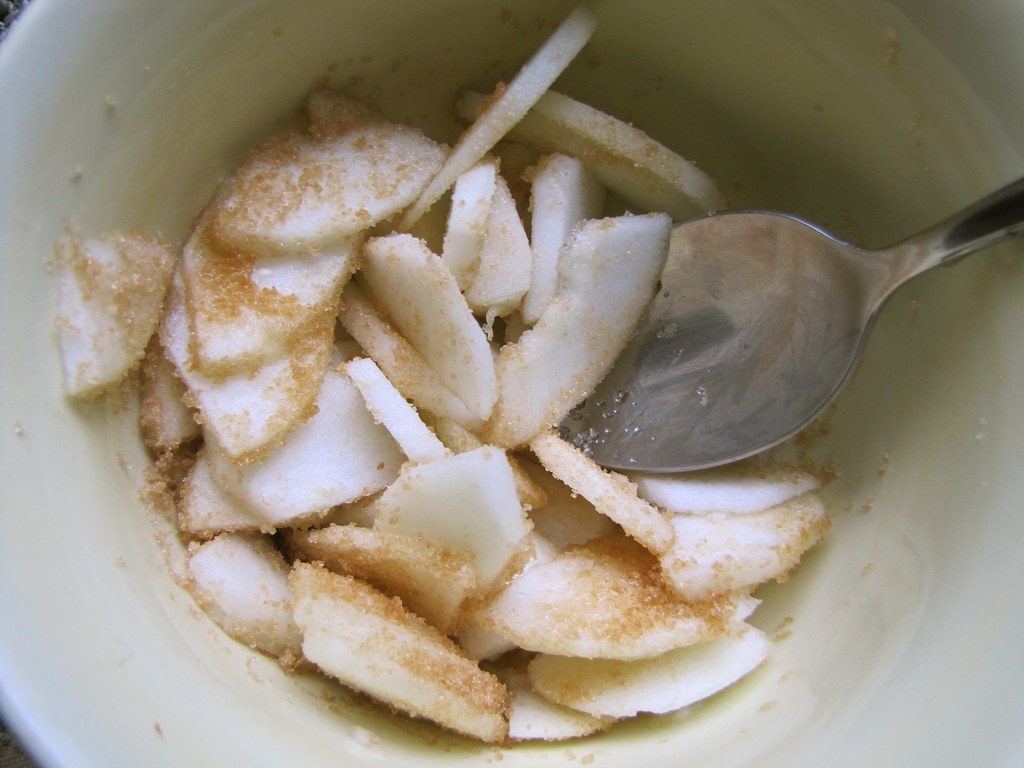 mixing up a simple apple filling 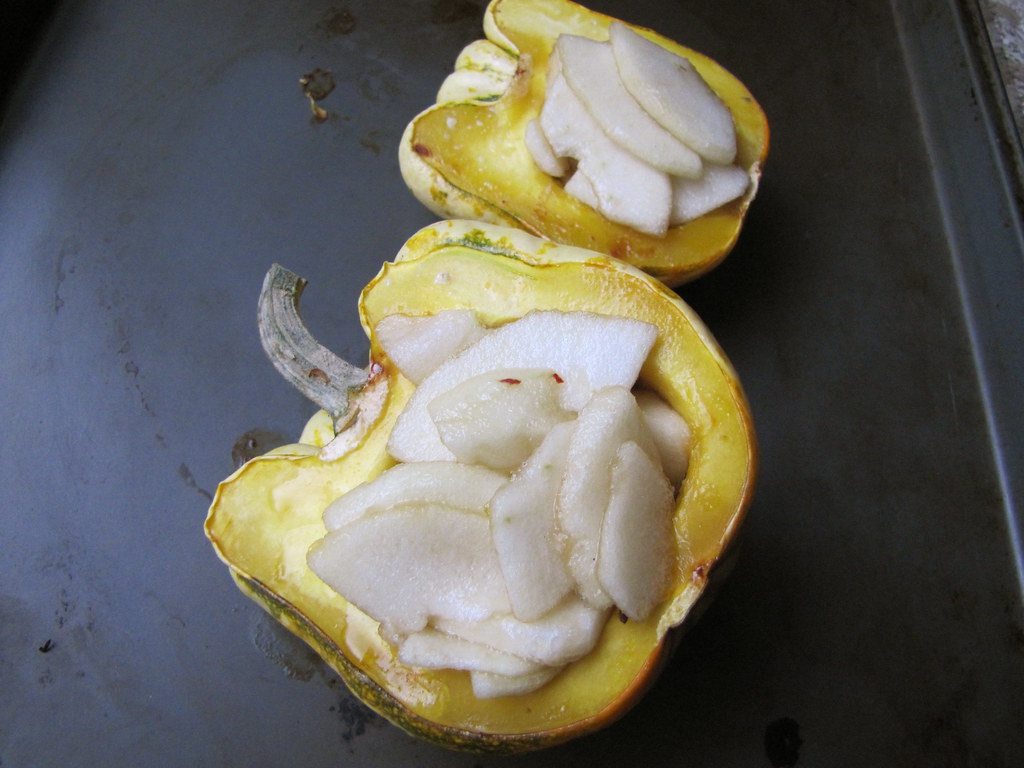 stuffing them into the par-roasted halves

Because the squash’s flesh is left au naturel in this recipe, be warned that it will taste much less intense than most sweet desserts (like a spiced pumpkin pie filling). The idea here is to scrape its softened flesh along with spoonfuls of the apple filling, all the way to the squash’s peel. It’s a healthier alternative to pumpkin pie, and you can taste the unique varietal of squash all the more.

I’ve allowed extra cooking time that the squash halves alone will spend in the oven, to soften enough. Adjust as needed according to the size and shape of your own squash — I know they’ll never be the same as the ones I’ve used just now!

Preheat oven to 350 degrees. Cut squashes in half lengthwise (to ensure more evenly-shaped halves). Scoop out the seeds and scrape away any stringy pieces with a spoon. Place the halves cut side-down on a baking sheet and roast for approximately 20-30 minutes, until the flesh gives a bit when you press down on its top. Remove from oven and flip each half over.

Combine the apples with 1 tablespoon of the brown sugar, cinnamon, and ginger. Divide into the two partially-roasted squash halves. In a separate bowl, combine the oats, salt and remaining brown sugar (and an extra pinch of cinnamon if you like). Melt the butter until just liquified (without letting it burn), and pour it into the oat mixture while stirring. Stir a few more times to incorporate the butter. Divide amongst the two squash halves and pat on top of the apple fillings. Bake for another 30 minutes, or until oat mixture is golden-brown. Serve after letting sit 5-10 minutes.

Five brownie points: Yes, a great alternative to a buttery, baked pie crust is a high-in-Vitamin A, high-in-antioxidants, all-natural squash. It’s sweet, but much lower in fat and cholesterol. If you must, add a dollop of ice cream or whipped cream on top of this dessert for some of that. But as is, it’s a great way to get some nutrition with your dessert.

Eight maple leaves: This dish can be made all fall and winter long, since both winter squashes and apples have such a long shelf life. So do oats, brown sugar, and just about every other small ingredient in this recipe. In total, it’s a very low-footprint dish, and when you use heirloom squashes, you’re helping promote biodiversity by keeping these varieties alive.