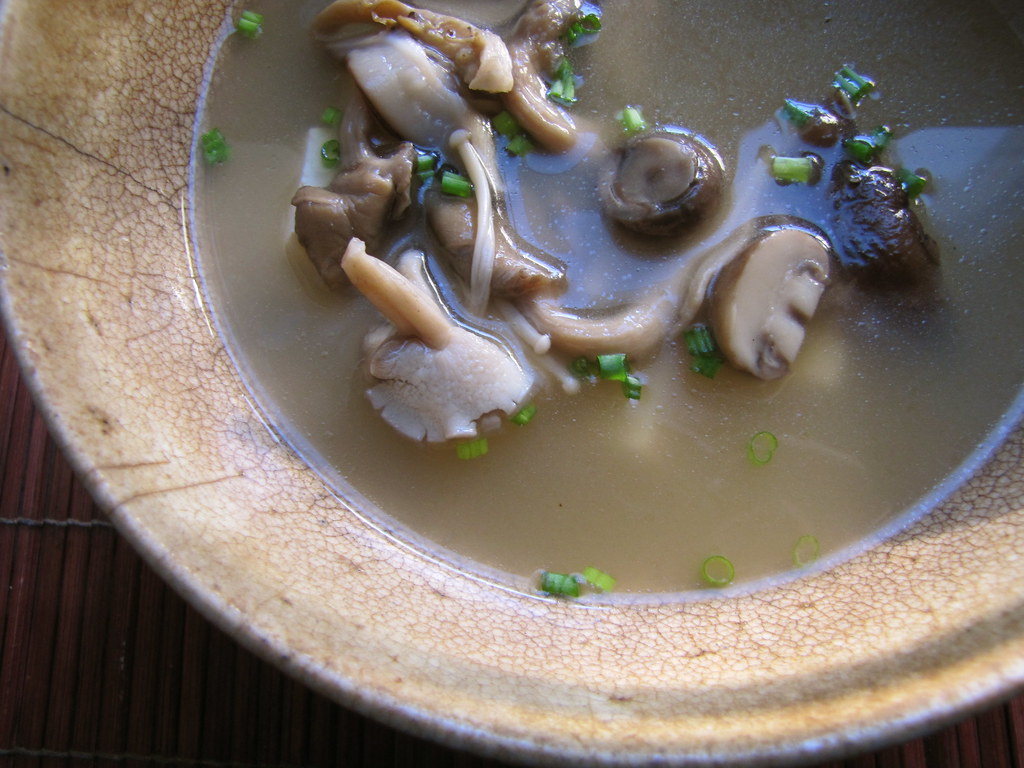 They might not be human, but fungi sure are fun — to eat. The woodsy, umami-rich flavor of mushrooms always gets my saliva glands going. The silky, slightly rubbery texture is titillating. I can’t decide which type is my favorite, but thoughtfully munching on different mushrooms one at a time from a spoonful of miso-based soup in attempt to identify one winner, I get lost in the sheer pleasure of it and forget.


So I like to mix ’em up, no matter the culinary tradition that they’ll be used for. After all, there’s nothing inherently “exotic” about a shiitake, especially if it’s grown locally; and crimini are no more Italian than the purpose they’re put to. I think we ought to find more uses for enoki mushrooms, those little spindles of crispness often found in soups, than soups. But that said, I’ve added these here to a pot of savory miso soup, along with shiitakes, oyster mushrooms and some baby crimini for variety. 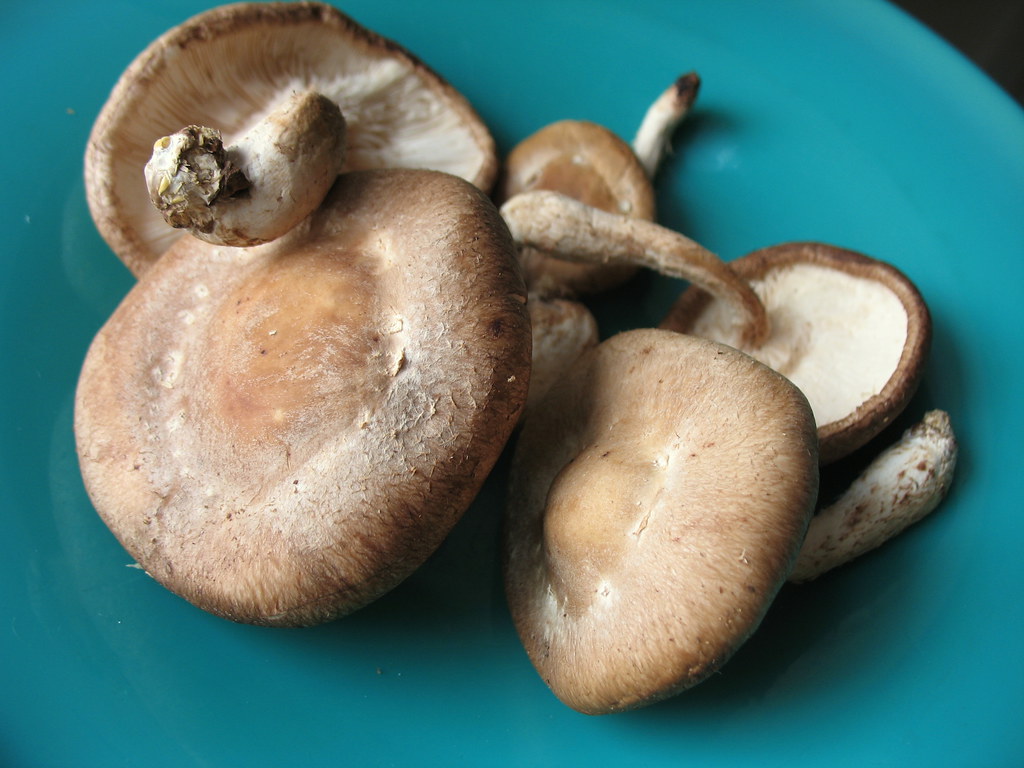 If you’re looking for a hearty, almost vegetarian soup that doesn’t take hours to make, miso is a great way to go. I made two gallons of this stuff to feed a charity event, Soup & Bread, a couple of weeks ago, and didn’t hardly break a sweat. The Brooklyn outpost of a weekly winter soup drive for charity led by Martha Bayne, who just published a cookbook featuring the best-of recipes from the events, it was a lot of fun to serve up this soup next to a handful of other homemade offerings from fellow cooks.

Proceeds from the event went to the New York City Coalition Against Hunger, but the soup was free and open to anyone who showed up — and we had plenty of it to go around. No two soups were alike, too, which included Good Fork chef Souhui Kim’s creamy cauliflower chowder, My Friend Mustard founder Anna Wolf’s havarti dill beer soup, Dave Klopfenstein’s mulligatawny, and Diner/Marlowe & Sons chef Caroline Hahm’s chili. 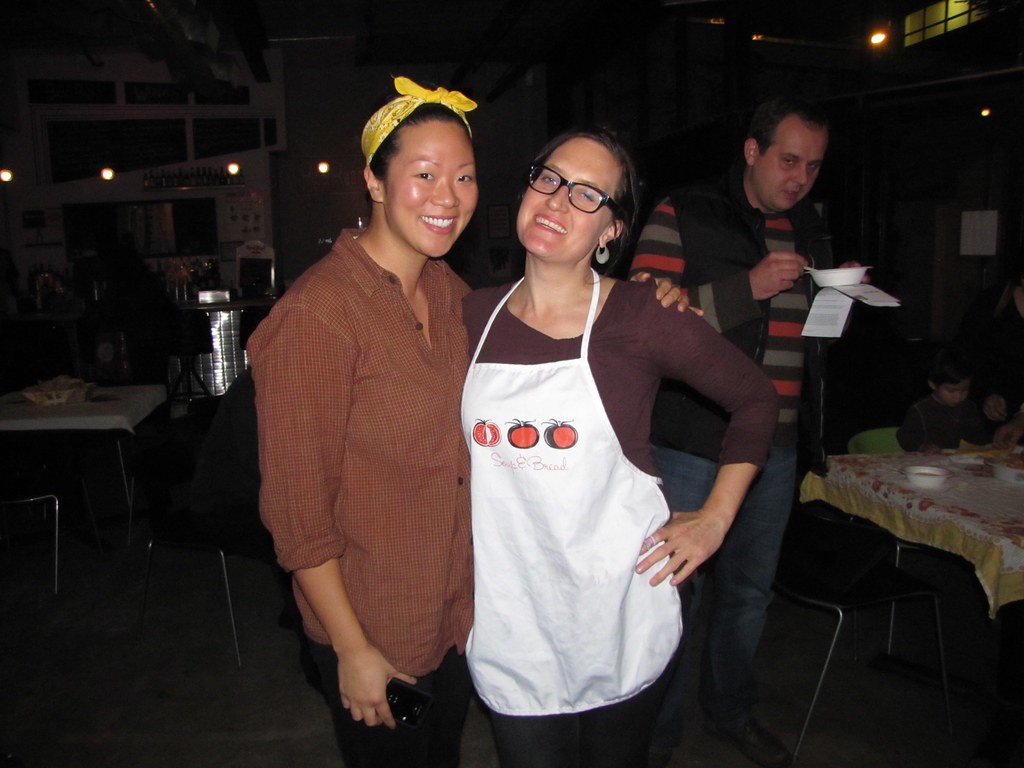 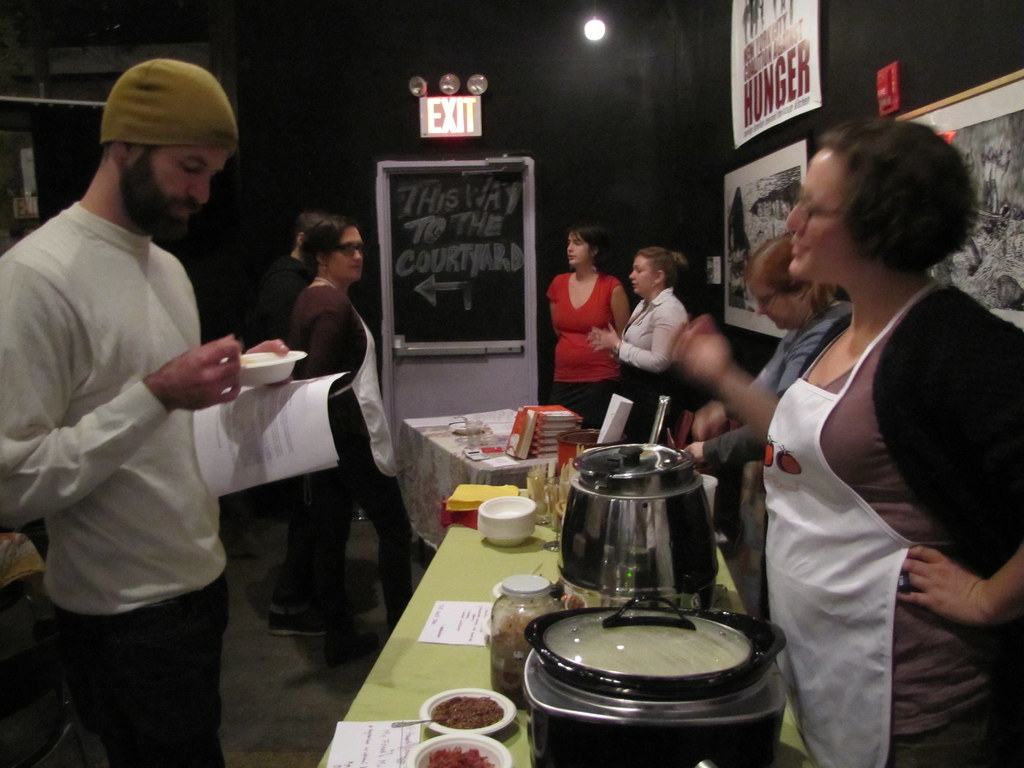 Anna Wolf serves up soup to the guests

With these delicious-smelling concoctions in the neighboring crock pots, I couldn’t help but feel a little guilty about choosing a simple soup to produce. But another great thing about bringing a miso-based soup was that I could be pretty sure it would be the only one — unless I just jinxed myself. In any case, let’s hope Soup & Bread keeps coming to Brooklyn each year, and check out the inspiring new cookbook in the meantime. 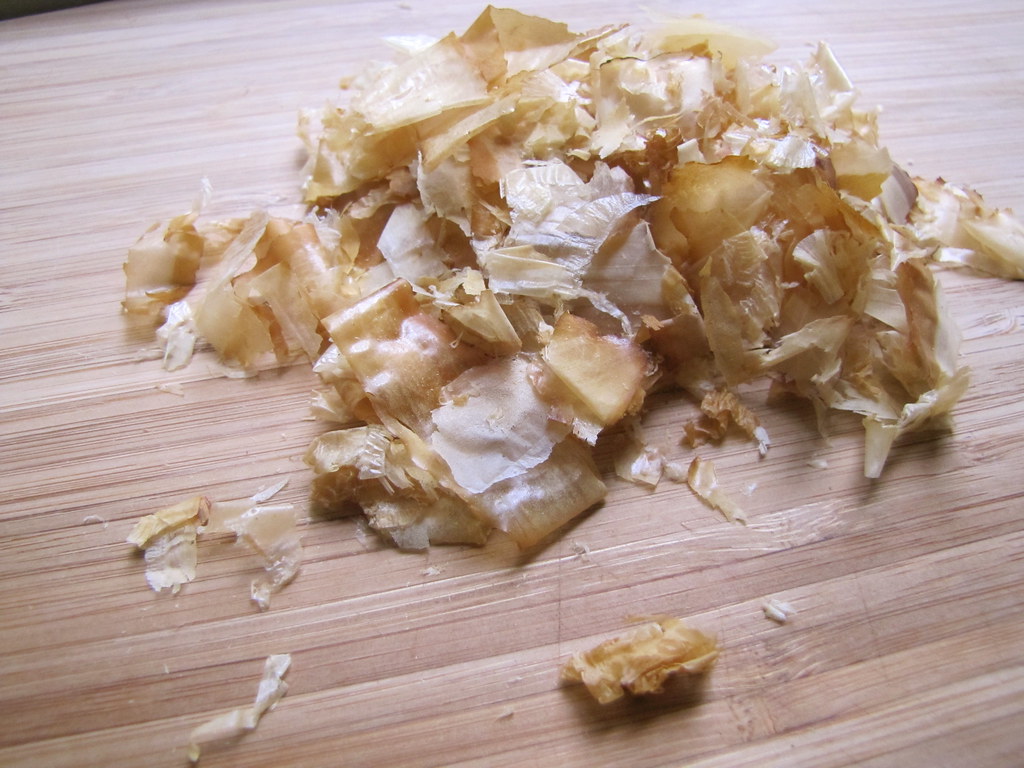 I called this an “almost” vegetarian soup because a good miso soup begins with dashi stock — and good dashi is made with bonita flakes. These dried, fishy flakes are traditionally shaved off a big block of petrified bonita. You can find them in Japanese groceries pre-shaved in a bag, along with the konbu seaweed, the other essential dashi ingredient. Meaning “sea stock,” dashi is the mother of all soup bases in Japan. I’ve been making it based on the recipe in Elizabeth Andoh’s Washoku for years, and it’s not difficult, but just takes a little time, since the dashi benefits from the seaweed taking a 15-minute soak first.

After the stock has been made, it’s just a matter of adding the mushrooms and miso. I sauteed the mushrooms in a pan with some fresh ginger first to speed up the cooking process (I was running a bit late that afternoon). This released their juices and flavors before dropping them all into the stock. 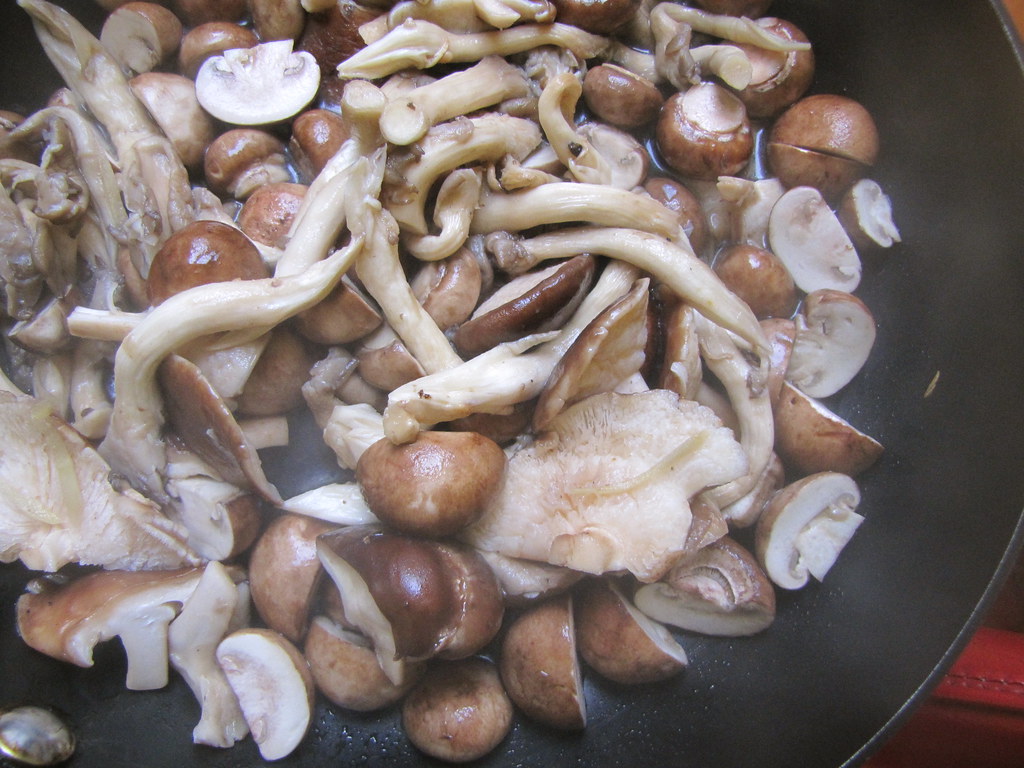 There are many types of miso paste to choose from, made from different starches and fermented for longer or shorter periods of time. The most common one you might see is a pale yellow paste called “white miso,” which has a lighter taste, with more floral nuances. I’ve been working through a tub of deep red-brown miso paste made from brown rice, which is a lot more earthy and potent, and I thought it would be a perfect match for the strong flavor of mixed mushrooms.

Swirl a big spoonful of this stuff in a small bowl of water to dissolve it before adding it to the soup. You don’t want to boil the soup once the miso paste is in there, because it will affect the taste. But you can add as much miso as you like to the soup, so make a big batch of the dissolved stuff and add gradually until it tastes right.

A little spray of fresh scallions is a nice finishing touch. I manage to remember this every time I have miso soup at home, but for some reason, forgot to bring my stash of them to Soup & Bread that night. At least there’s always next year…

Submerge the kombu in a large pot with the water and let soak for 10-15 minutes. Put over medium flame and slowly bring just to a boil. Remove from heat and add the bonita. Let soak for 3-4 minutes until the flakes begin to sink. Strain the solids from the liquid and return the broth to the pot. Reserve the kombu and save it for making dashi with another time.
Meanwhile, heat a pan with the neutral oil and add the ginger. Once hot, add all the mushrooms and sautee 3-4 minutes, until fragrant and slightly reduced in size. Transfer entire contents of pan to the strained stock. Bring just to a boil and let gently simmer for 30-45 minutes.
Place miso paste in a small bowl and add a ladle of the hot soup stock. Stir to dissolve the paste completely. Add the paste to the rest of the soup gradually, tasting after each addition, until the soup is salty and flavorful enough. Serve with the chopped scallions for garnish.
Cost Calculator
(for 6-8 servings)
4 oz. fresh crimini mushrooms: $2.25
4 oz. fresh shiitake mushrooms: $5.00
4 oz. fresh oyster mushrooms: $5.00
1 small packet enoki mushrooms: $1.99
1/4 cup (or 1 small packet) bonita flakes: $0.50
20 sq. inch piece kombu: $2.00
3 tablespoons brown rice miso paste: $1.50
couple slices fresh ginger: $0.20
1 tablespoon canola oil: $0.10
2 scallions: $0.60

Three brownie points: Mushrooms have long been a popular meat substitute for vegetarian entrees, but they come with a host of health benefits that are not partial to meat — like potassium, B-Vitamins, the antioxidant selenium, and they’re one of the only plant-based sources of Vitamin D. But the really killer health benefit (and source of protein) in this recipe comes from the miso paste, a naturally fermented soybean product that supports your immune and digestive systems as it provides a wide variety of essential vitamins and minerals.

Six maple leaves: Even though some of the ingredients are imported, this is a really low-impact food. The dried seaweed, bonita, and fermented soybean paste are all naturally preserved and easy to transport — as well as store in your pantry at all times. Mushrooms can be harvested continually throughout the year, and and can even found in your backyard (though I’d recommend a comprehensive foraging course before trying those out). All told, these ingredients are very renewable resources, especially the seaweed and miso part, that we can do the earth a favor by getting more of our protein and nutrients from.