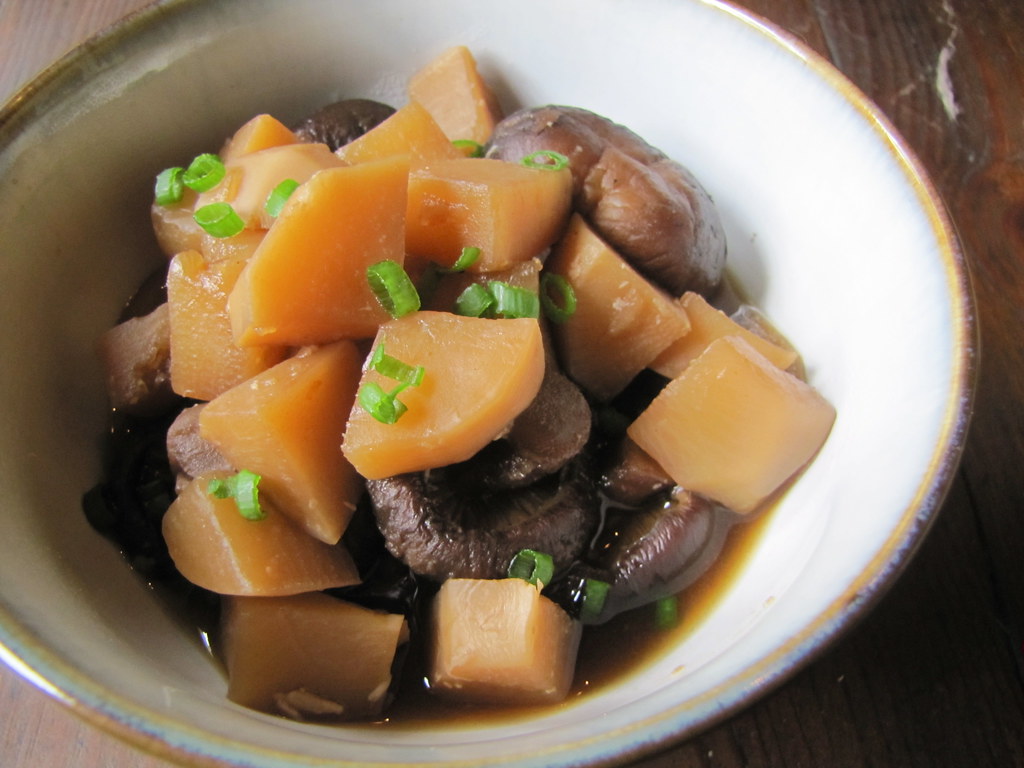 This is a cozy comfort food for a fall-time side dish or snack. I’ve long felt that turnips were under-appreciated, probably because of their sharply bitter taste. But when you roast them, their natural sugars come to the surface and caramelize in brown, fudgey smears. When you boil them and mash them, they can be combined with cream and butter to soften their taste. Here’s one other way to tame the harsh flavor of turnips, and make it a welcome accent instead.


You might see something like this using daikon radishes in most East Asian cuisines — Korean, Japanese and Chinese. These bloated, white radishes (or turnips — the word for turnip and radish is the same in Chinese anyhow) are much milder in taste, and more watery and crisp in structure, too. They don’t need as much help as the common Western purple-topped turnip, which I’ve used here instead. 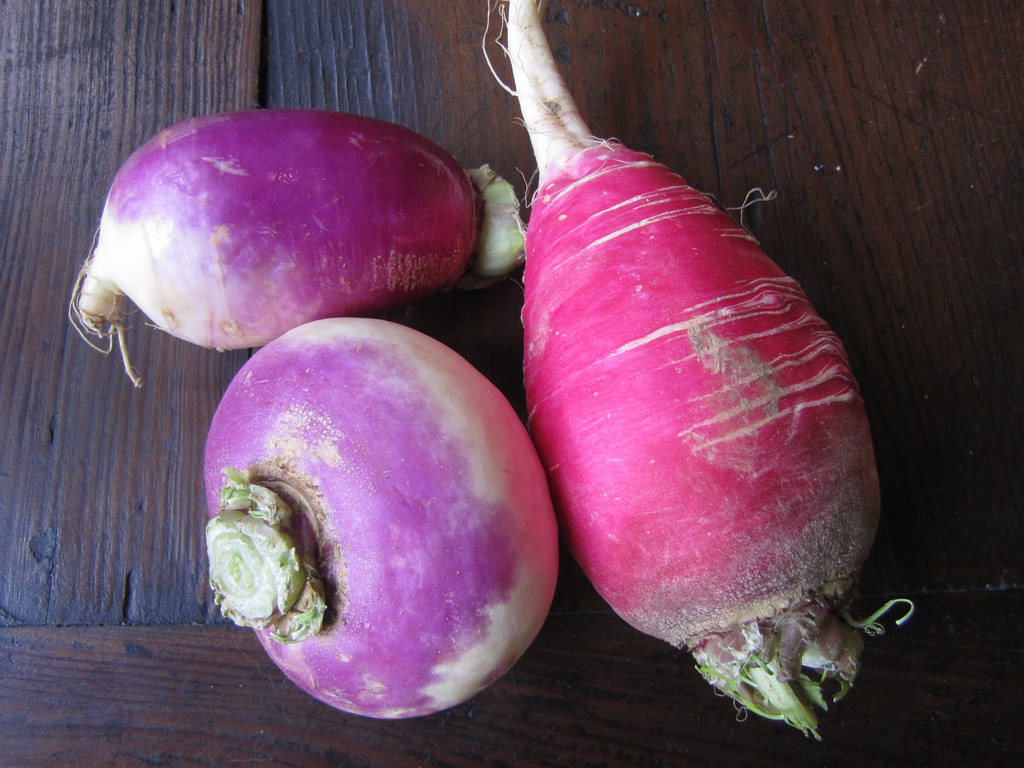 vibrant purple-topped turnips and a radish from the Greenmarket

I was attracted to these turnips and beautiful magenta radishes at a stand at Union Square Greenmarket last Friday (though I can’t for the life of me remember the farm’s name). They were so colorful that I impulse-bought them, resolving to find a way to properly showcase them later. I ended up crunching into the spicy pink radishes raw, with some thinly sliced apples in a salad. But turnips don’t taste too great this way; they needed a little more help. 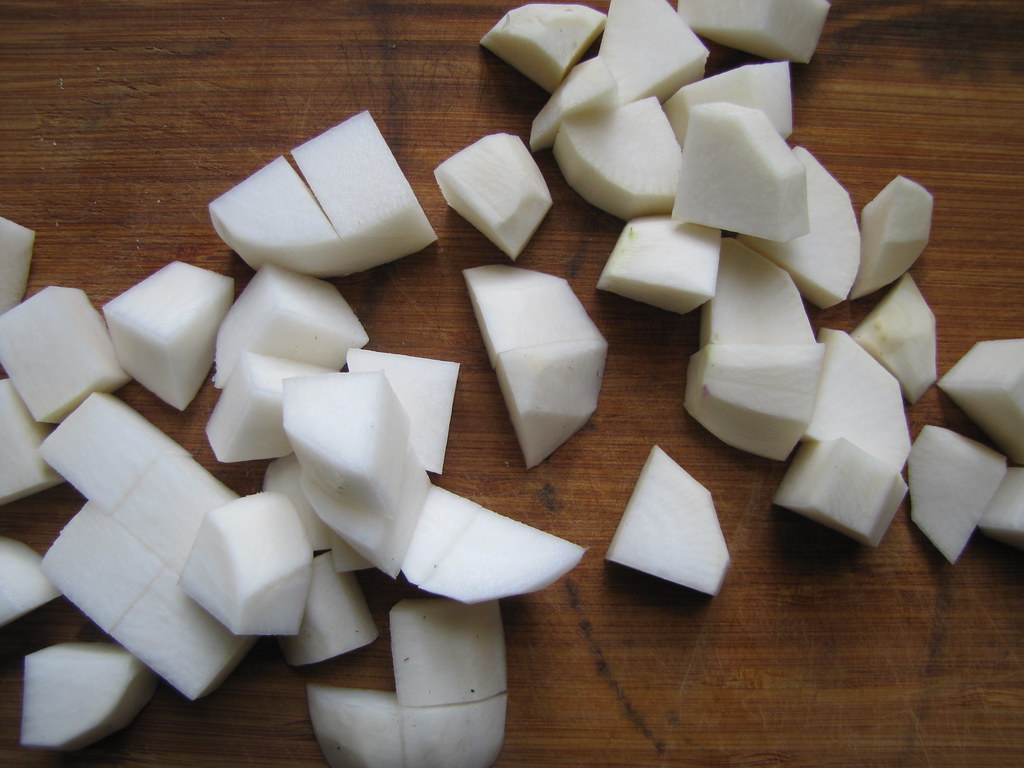 the turnips get a standard dice

So I turned to the common Chinese cooking method known as hongshao, or “red-cooked” — essentially, stewing in a soy sauce and five-spice steeped broth. I added a good dose of sugar to the broth, though, because turnips are very bitter, and this would give it a more Japanese edge for its sweet-soy profile. If you add some chopped fish such as mackerel to the braise, you’re really in Japanese territory then. But if you add dried shiitake mushrooms like I did, you’ve got an easy, cheap and vegetarian dish that knows no cultural absolutes. 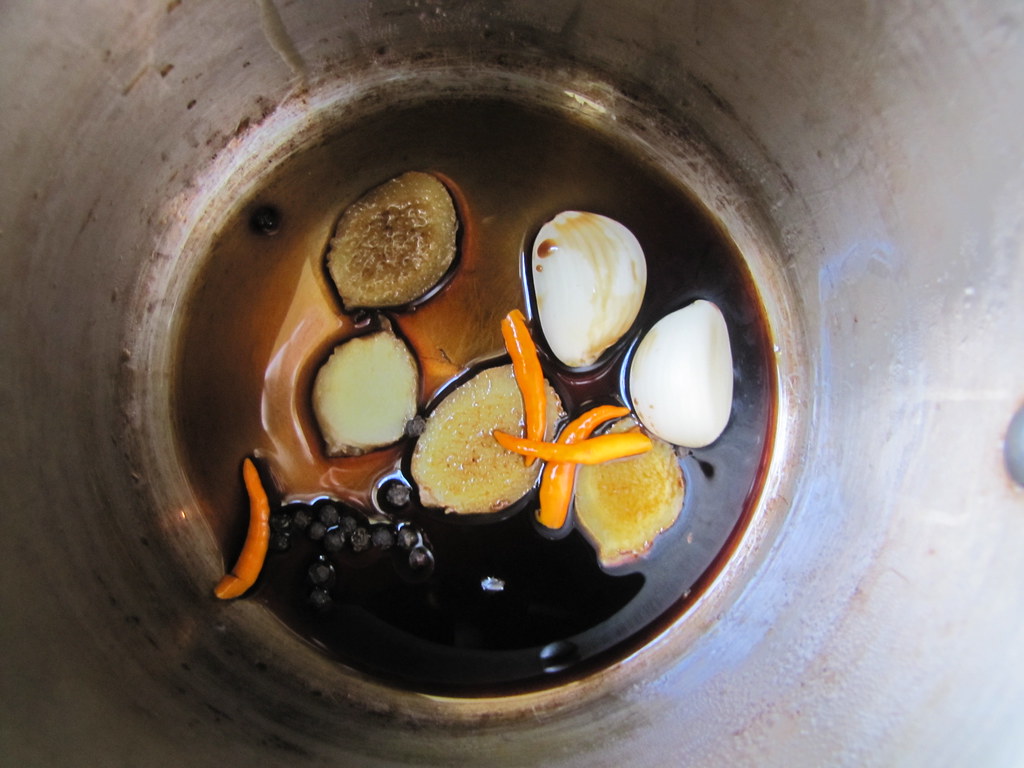 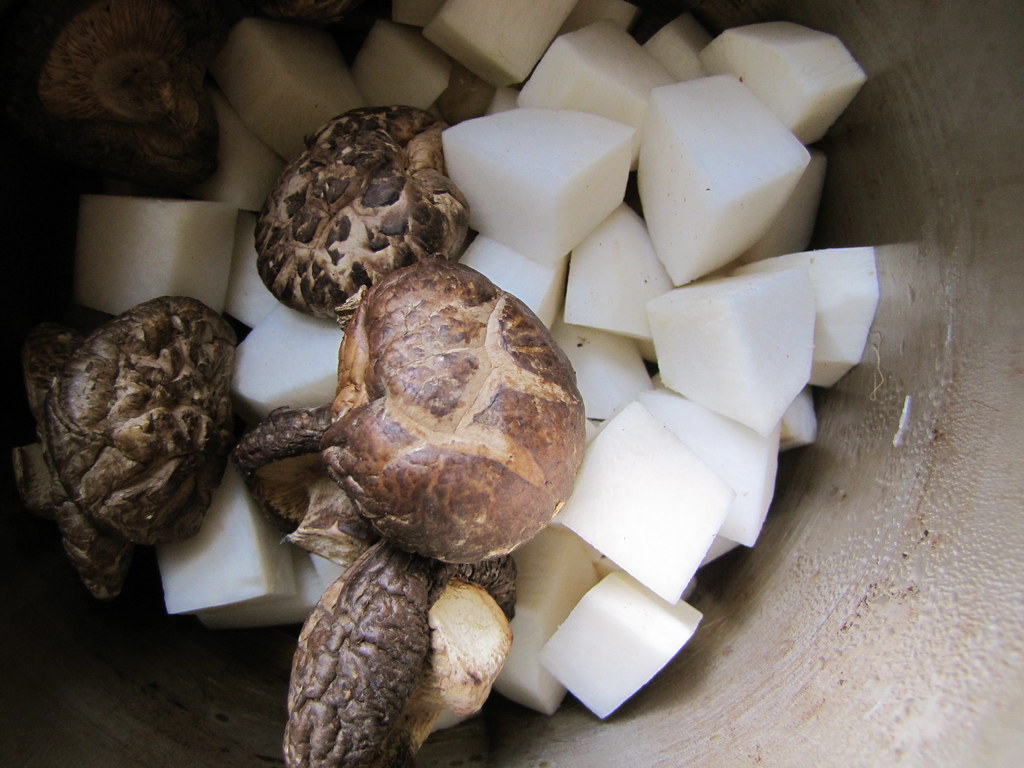 preparing a hongshao bath for it all

Oh, and I didn’t have all five of those spices, too. In a small pot, I merely combined slabs of fresh ginger, garlic cloves, some black peppercorns (rather than Szechuan peppercorns, which would be more authentic), and a few fresh chili peppers from the roof. A few too many, actually. Use just one or two for a hint of spice, or else you’ll burn your mouth a little too much on this like I did.

Then it’s simple: cover with just enough water to submerge and add soy sauce and sugar. Let it simmer for two hours or so. You don’t want the turnips too soft that they lose their shape, but just soft enough to melt in your mouth and soak in the flavors like sponges. Beautifully bitter, tasty sponges at that — and the umami-rich shiitake mushrooms help to round that out all the more.

Combine the garlic, ginger, peppercorns, chili, soy sauce and sugar in a pot. Heat while stirring until the sugar has dissolved. Add the turnips and shiitake mushrooms and enough water just to cover. Bring to a boil; reduce heat to a gentle simmer. Cover and simmer for 1 1/2-2 hours, or until turnips are softened and reddish-brown (you may want to turn them once or twice in the midst of cooking to get them all underneath the broth). Spoon out the turnips and mushrooms into a serving bowl. Discard seasonings, and pour the broth over to serve.

Four brownie points: As as tasty, lip-smacking side dish, this one has healthy turnips and no added oils. But it does have plenty of sodium and sugars, both from the added soy sauce and sugar and from the vegetables themselves. Shiitake mushrooms really don’t need much to marinate them, they’re so savory on their own. But like most dried mushrooms, they’re naturally sodium-packed as well. At least the turnips are boosters of heart-healthy nutrients, like Vitamins A, C and a shocking amount of K.

Six maple leaves: You’ve got local, low-impact turnips on the one hand and imported (yet still low-impact) shiitakes on the other. As for the seasonings, you might be surprised about the origins of common staples such as garlic and ginger: most conventional grocery-store garlic hails from China (just check out the labels on those stacked in white mesh sacks). But the allium can be successfully grown at local farms in the Northeast, too. I’m fortunate to receive a bulb just about every week from my CSA, which are invariably more fresh and last longer. The ginger root however does not enjoy much success grown anywhere but in tropical regions.