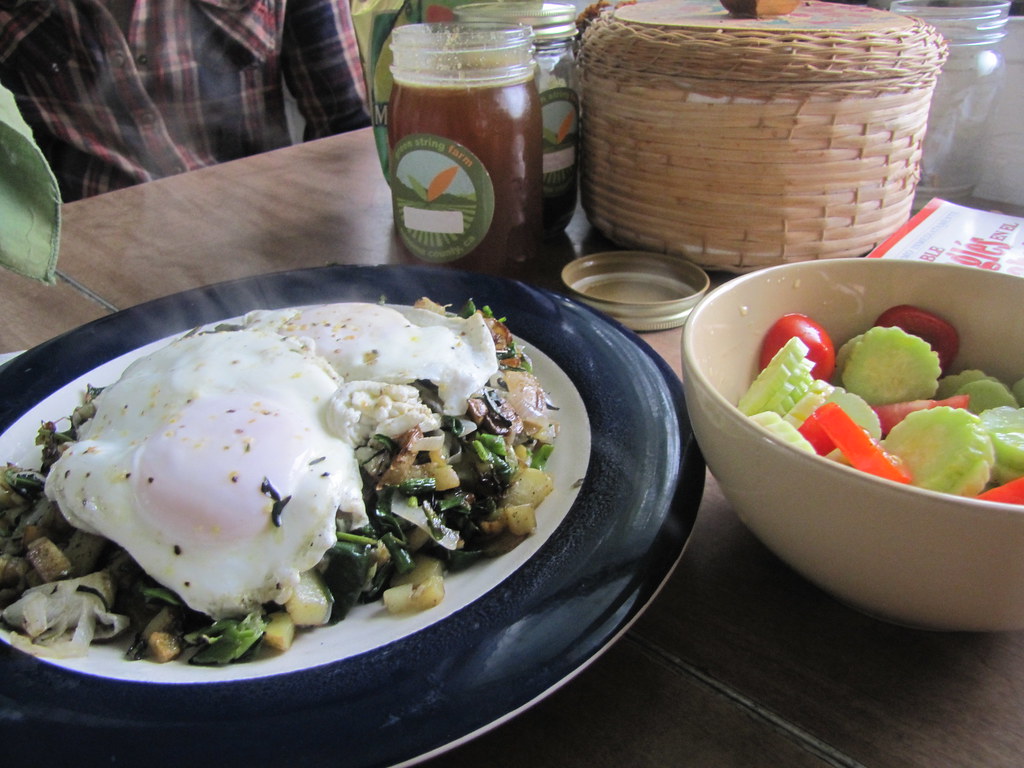 Here’s a great recipe for what to wake up to: a thin fog clearing over a stretch of golden, sun-baked hills, the chortle of a horse in a barn nearby, the sour smell of manure and fresh scent of wild fennel wafting in through the window, and farmers making you breakfast with newly dug potatoes, greens, and enormous blue eggs. Over the course of my second week in California, I’ve really woken up to what real farms (i.e. not Brooklyn rooftops) are like.


I took a detour from San Francisco to Sonoma County recently. It was only about one hour’s drive North, but a drastic change in climate — about twenty degrees warmer and sunnier much longer during the day. My friend Melissa, who chaperoned me on this trip, told me that where she currently works, at a farm in Mendocino County, it’s even warmer and drier up there. But, she was taking a drive to Sonoma to visit her old stomping/farming grounds there, and we got to meet up in the middle for two fun-filled days. 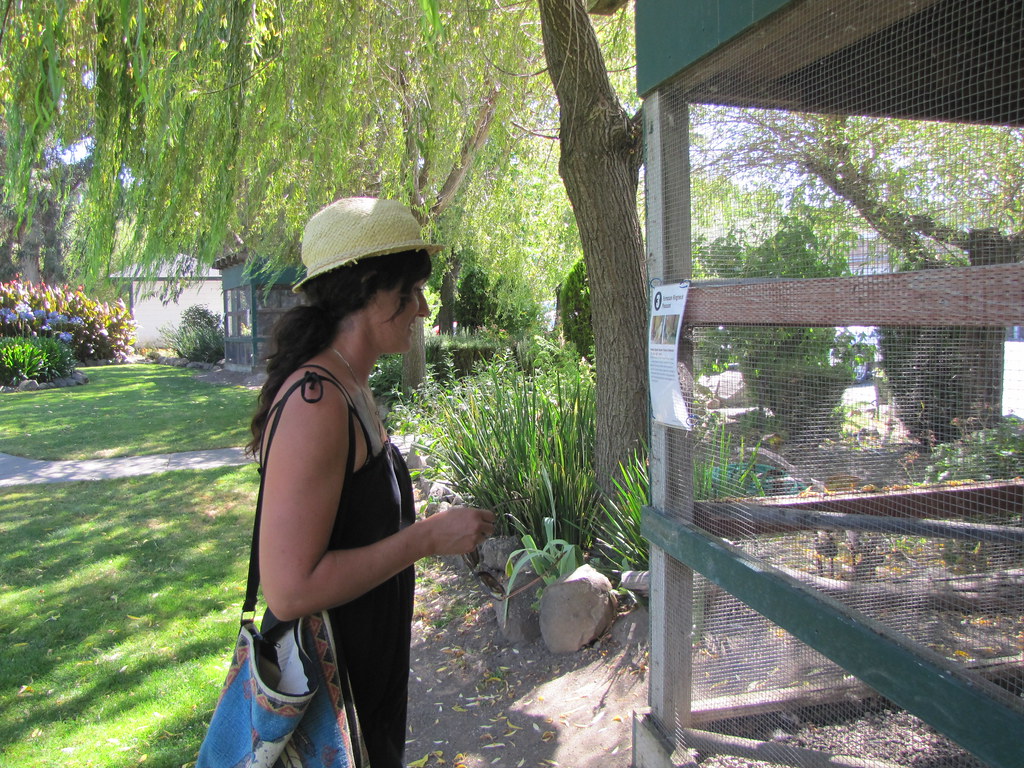 You might recall Melissa (aka Midge Pingleton) from various cook-offs as well as Garden of Eve farm in Long Island, where she used to work before switching coasts. She’s a real legend on this blog, come to think of it. And she’s still farming, cooking, pickling and jamming up a storm — so much so that she’s rented a plot of land in Sonoma that’ll be her own farm starting this fall. It’s called Bees Knees Farm, and it will grow vegetables and orchard fruits to sell to local farmers’ markets and CSAs. Check out how to support its launch and get some of her really good pickles in exchange here. 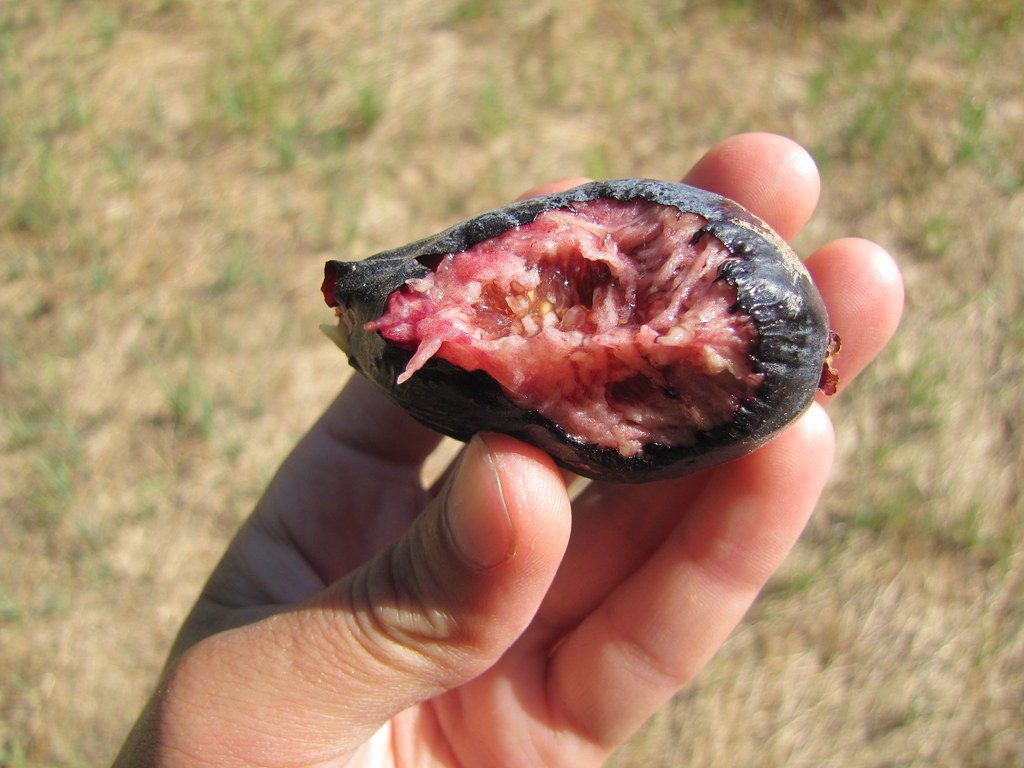 a black mission fig straight from the tree

Our first stop was at a roadside dinner in Sonoma called the Fremont Diner, where we loaded up on Southern fare with only local farms’ ingredients (fried chicken for me, pulled pork sammie for Midge). It’s a fantastic place. But perhaps the most memorable part about it was that a few hours later, we were covered in flour churning out brick-oven pizzas at Melissa’s friend Kashaya’s brick oven pizza-mobile at Sonoma Farmers’ Market. (The farmers’ market there is in the evening, and not to sound like a broken record given my SF Part 1 post, but it too features prepared food trucks and farm stands in fairly equal portion and attendance, something that Brooklyn has not yet quite done.) And one of the people we ended up serving pizza to was none other than the waitress who’d served us at Fremont Diner earlier that day. Too small a world. 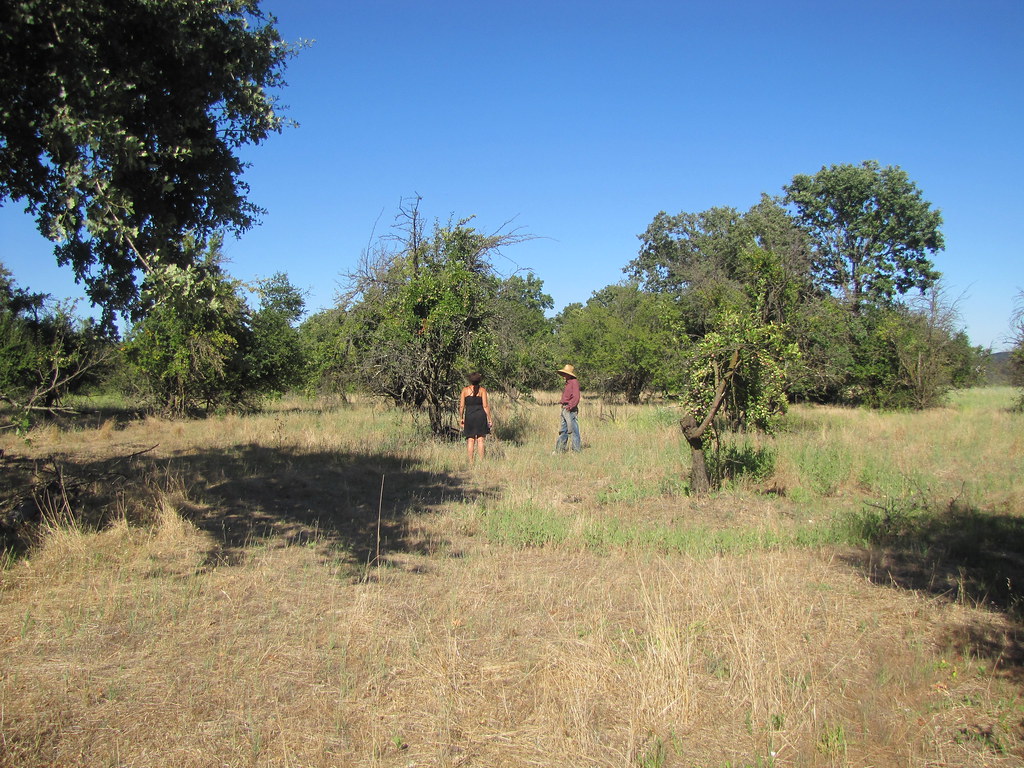 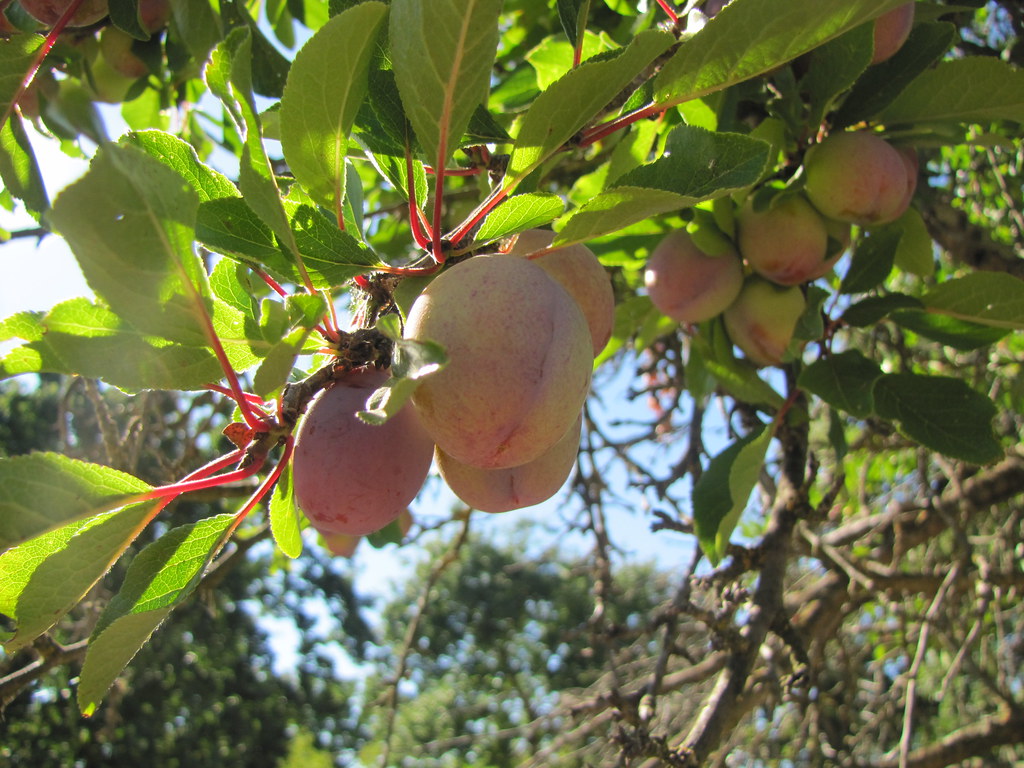 And way too good food in between to gain an appetite for it all. After hitting up the diner, Melissa took me to the roughly one and a half-acre plot that she’ll be soon farming at, and that of a neighboring farmer, Arthur. Arthur has been growing plums, peaches, apples, figs, berries and a small garden of vegetables on his widespread plot for decades. We got to taste them all as we toured around. Later, Melissa told me that his experience in stone fruit orchards was especially helpful, as there were fruit trees on her land, too. Arthur didn’t see the need to sell his produce far beyond giving them to friends and a select few loyal accounts; whereas Melissa, just starting out, was eager to provide food to local restaurants, CSAs and more. A changing of the guards in Northern California was happening before me.

While he happily showed us around his farm, Arthur was also grappling with a disturbance on the land that happened earlier that day: a beehive had swarmed all of the sudden, and he wasn’t sure if he needed to adopt another hive right away. When a bee colony swarms, he explained, they take a new queen bee along with them, leaving about half of the declining colony behind. While he scratched his head about this and pondered talking up an expert beekeeper in the city, Melissa urged him to come by the farmers’ market to get pizzas from us later. He did. 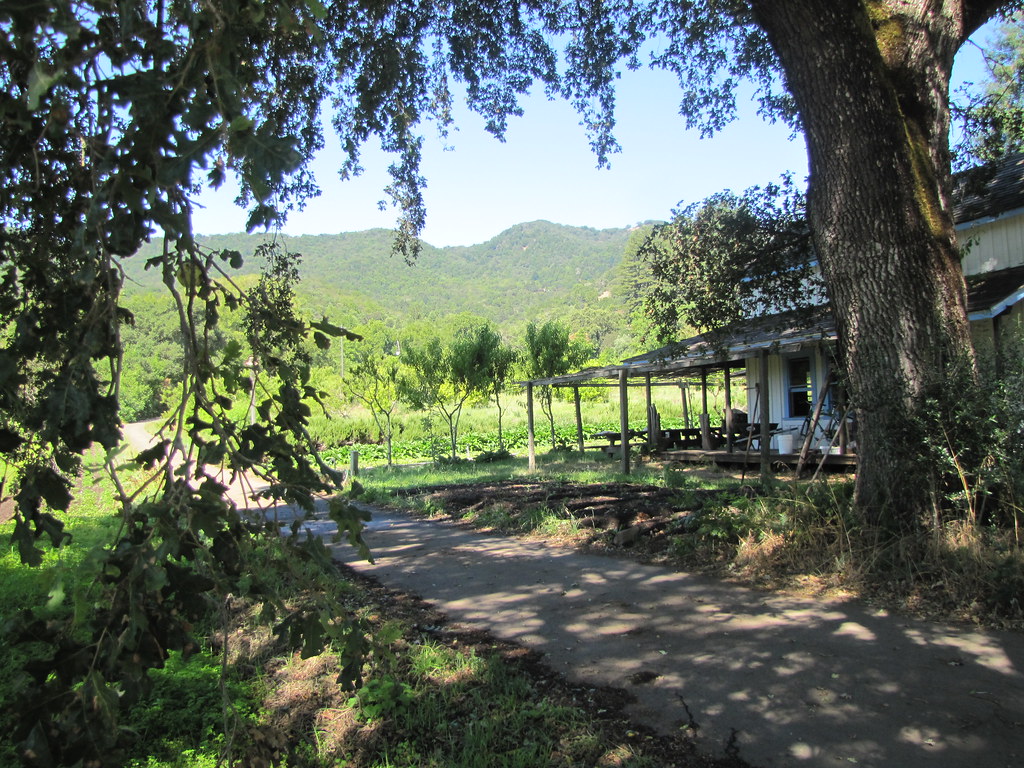 a view from Green String Farm in Petaluma, CA

That night, we set up camp at Green String Farm, a sustainable, 140-acre farm in Petaluma where Midge used to work. We went bowling with a number of the interns and graduate-interns in the farm education program there before calling it a night. The next day, we toured as much of the extensive lands as we could (the vineyards notwithstanding). It was there where the compost was smelly enough to pervade the wildflower-strewn landscape, and we came across solar panels that provided energy for the sparse living quarters. It was also there where I was treated to a savory potato hash and fried egg breakfast prepared by Melissa’s former fellow-interns, as well as a lunch of fresh whole-wheat pasta with pasture-raised meat sauce studded with plenty of summer vegetables. 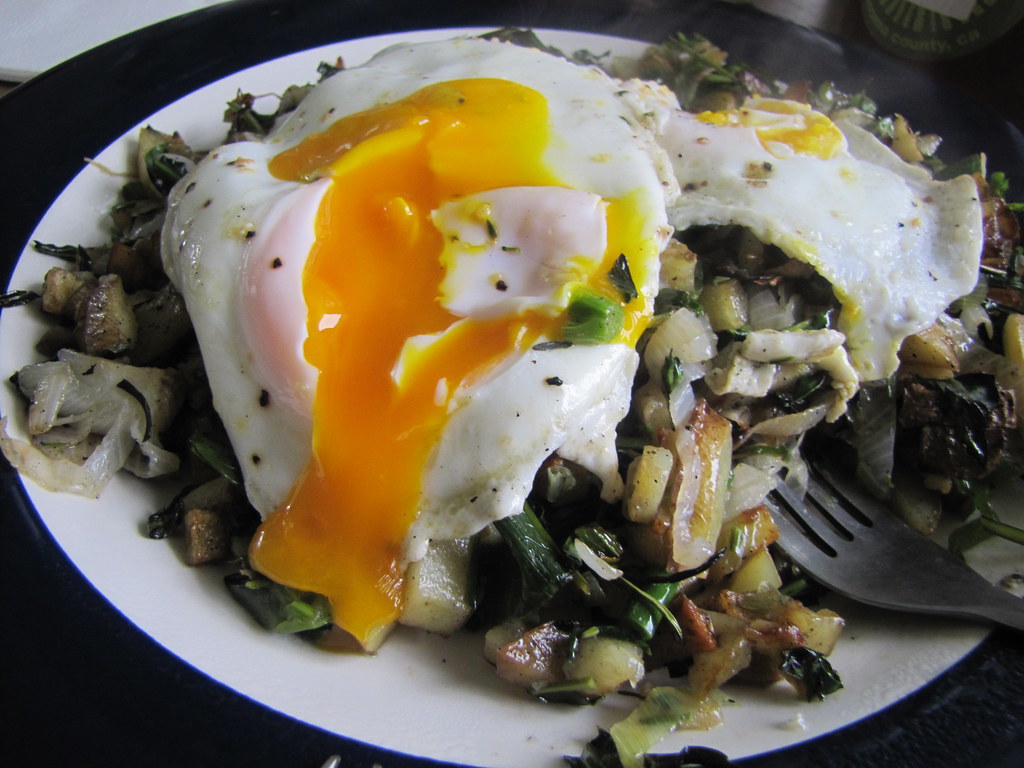 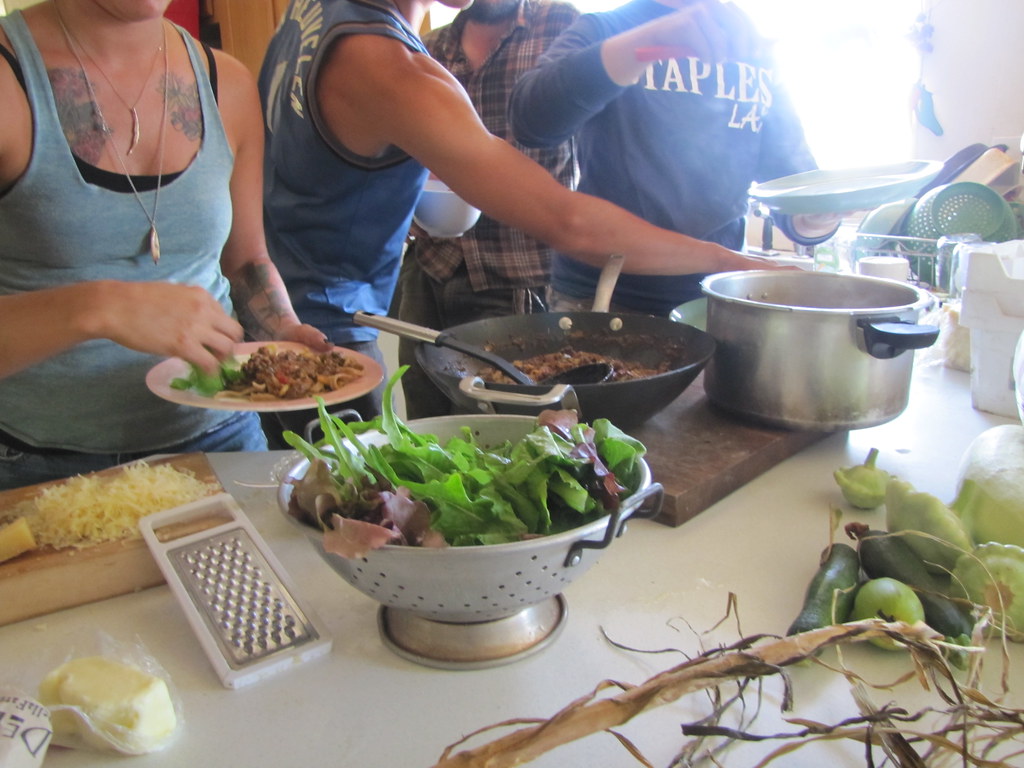 digging into a fresh pasta and meat sauce lunch, prepared by the farm interns

When you live on a farm, it’s just too plenty to eat anywhere else, I quickly learned. Even in the early morning hours, when we came home from the bowling alley, Melissa’s friends ducked into the gardens to pick cherry tomatoes for midnight snacks. Originally, Melissa and I were planning on going into downtown Petaluma for breakfast and lunch, but we were (quickly) persuaded by the farm intern-friends to join in their feasts at the cabins instead. The rich egg yolk bleeding into the hash in the photo above, as well as the fresh salad made with tomatoes and Armenian cucumbers at top, were just a few things that were closest to grab on the farm and easiest to throw together for a meal. Can you really order anything more exciting than that? 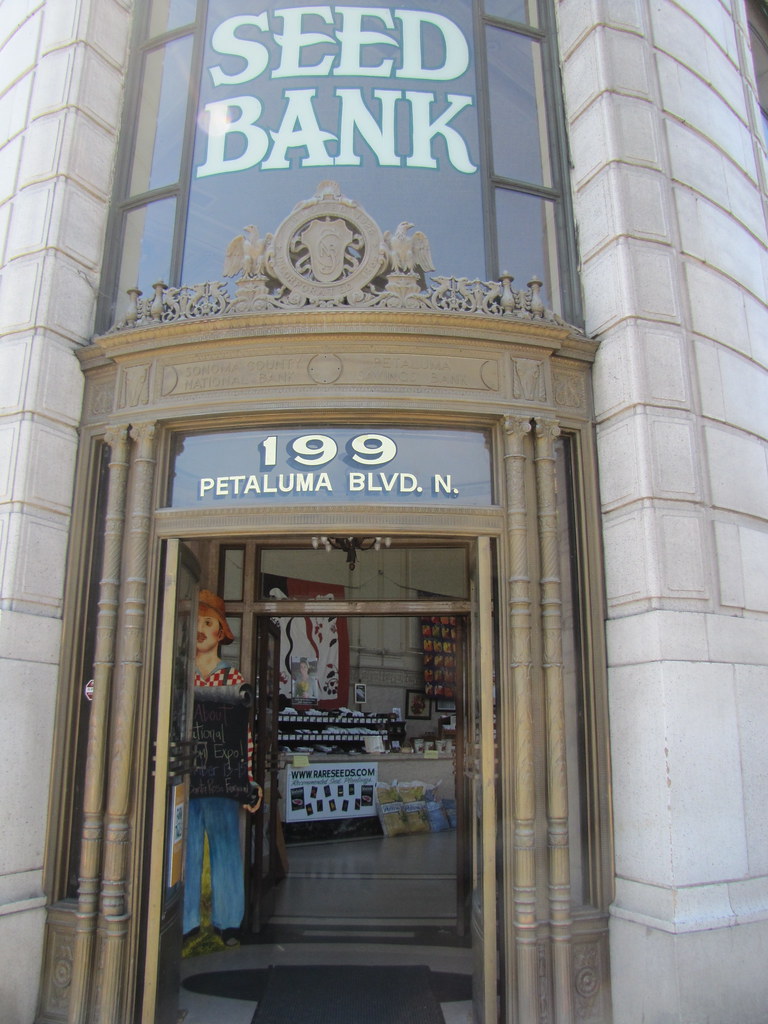 Perhaps you can. One of my last stops in Sonoma County was the home base of Baker Creek Heirloom Seeds, where I’ve bought most of the seeds for my garden from by mail-order delivery. This monstrous warehouse of saved seeds is actually housed in an old town bank, and now bears a crest for “Seed Bank” on its front door. I bought a few more seed packets there to plant next season, or perhaps once I get back to Brooklyn in late summer. It’s always good to know where exactly your food is coming from — and now, even your seeds.

Heat 2 tablespoons of the butter and sautee the potatoes over medium heat for 4-6 minutes. Add the onions, greens, garlic, peppers, and a pinch of salt and pepper and continue to sautee, stirring occasionally, 5-7 minutes.

On a separate pan, heat the remaining tablespoon of butter over medium-high. Fry the eggs sunny-side up.

Transfer the potato hash to a serving dish and place the eggs on top.