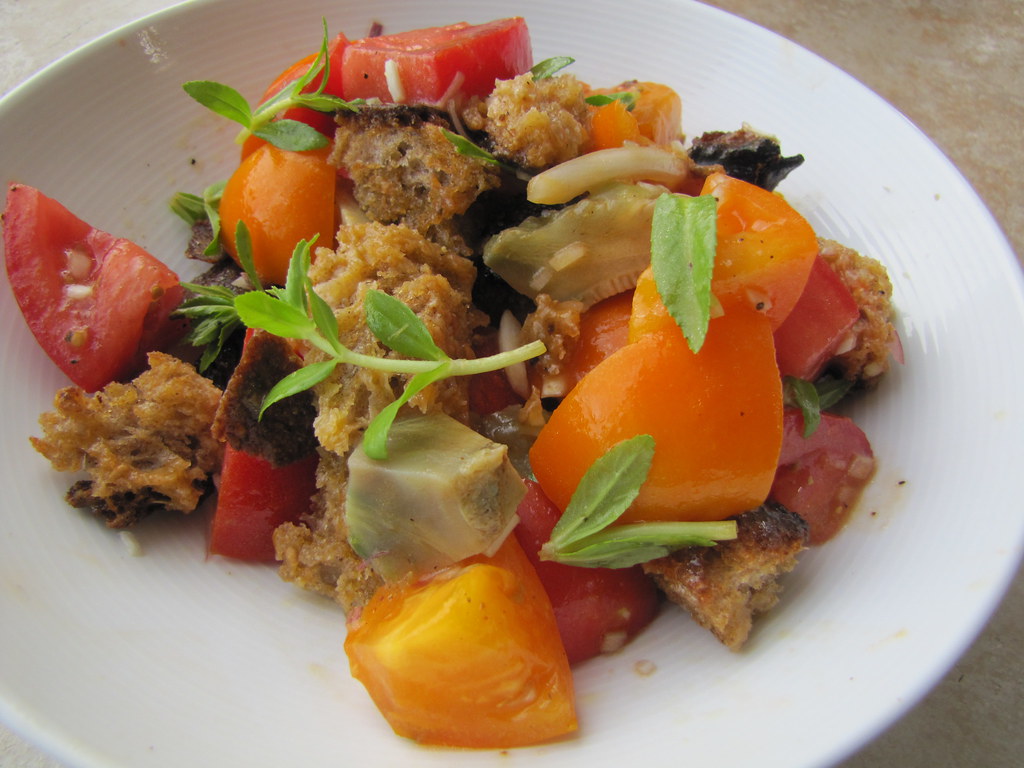 We’re not in Kansas anymore… if you can equate that with “home” in any case. Driving up and down the steep, scary hills of San Francisco in a borrowed car, I’ve actually passed a road called Kansas St. but none named after New York. It’s good to get away. I’ve taken off for the West Coast, leaving my apartment to a friend and the garden in good hands, to sink into a different vibe. This is my first report from the Bay Area, where I’ll be staying ’til the end of August (when this blog hits its five-year anniversary, incidentally).


Why am I here? A lot of people have been asking. Well, for lack of a tidy explanation, I’ll be trying to illuminate some of those reasons for this getaway in this post, and recipe, and in more to come. And wish all a happy late-summer wherever you are. 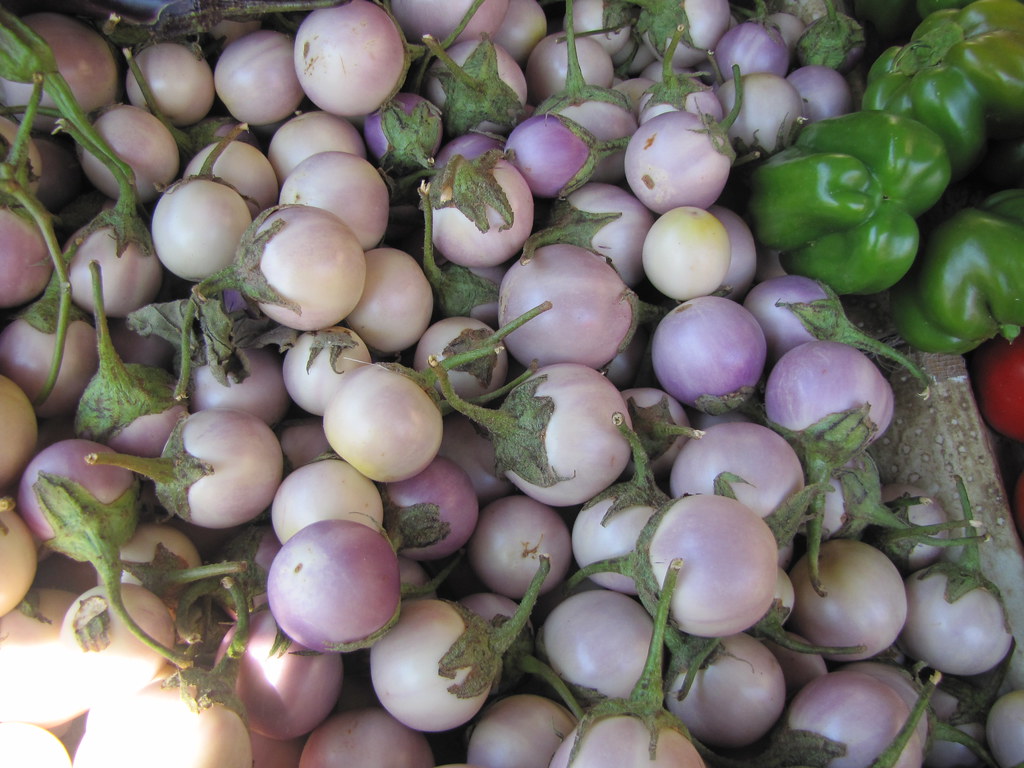 Getting into the city late on Tuesday night, I hit up a taqueria in the Mission District and called it a night. The next day, I spent no fewer than two hours and fifty dollars at the farmers’ market in Civic Center, marveling at what seemed to be three seasons of produce lumped into one blissful stroll downtown. Among the finds were the tiniest round globes of green summer squash, like limes, round, purple-blushed eggplants of about the same size or smaller, pattypan squash, wax beans, spring onions, full artichokes, heirloom tomatoes, corn, and even a fig tree for my hosts’ patio. I admit I went a little ballistic, but thought it only wise to stock up — as if there weren’t farmers’ markets almost every day here. The very next day, I went to the market at Ferry Terminal, but exercised a little more restraint. 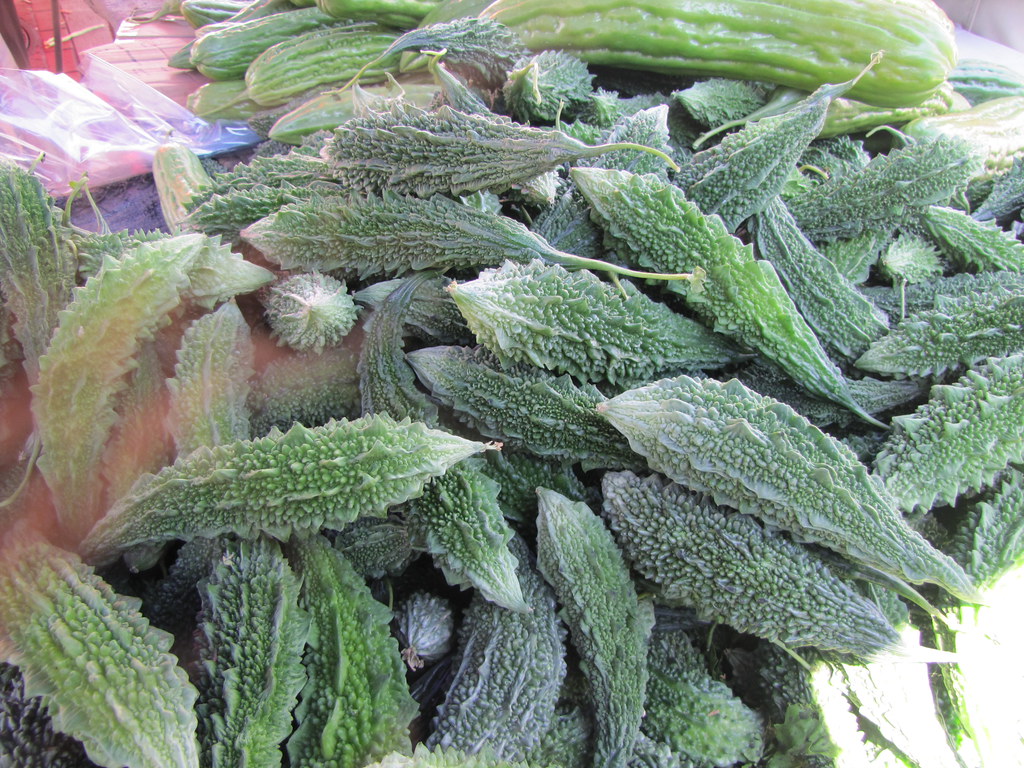 Most fascinating were the ethnic produce and herbs found at these markets, like bitter squashes of Southeast Asian cuisines (but not so familiar to Western ones). I’ve seen wrinkly, pale-green gourds known as bitter squash at Asian markets, but not spiky ones, favored in Vietnam (according to the Vietnamese farmers selling some), and haven’t chanced upon Thai green eggplant in a while. Noting the wide selection of these uniquely flavored fruits, this was a market very much for the ethnic communities, too.

Well, I decided to pick some up to play around with, too. While loading up on bunches of herbs from a stand, I asked the farmer about one that was labeled “Rice Paddy Herb.” The friendly attendant informed me it was a Vietnamese herb often used to garnish soup, or it could be sauteed whole as is. It has a unique, peppery, almost anise-y, almost shiso-like flavor that almost defies comparison. I figured I could make it work with something. 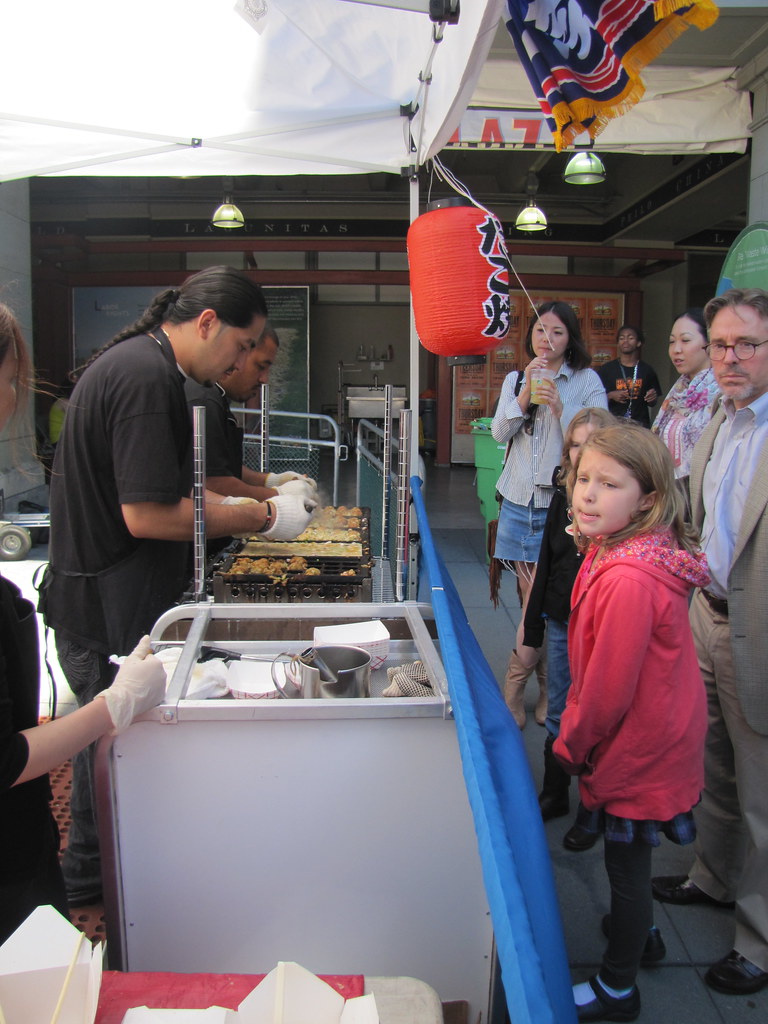 The market at the Ferry Terminal is like a better-executed version of Brooklyn Flea’s Smorgasburg: farmstands are set beside food stands in perfect harmony. People were just lining up for lunch at the small handful of pop-up restos or food trucks, which included sorbet and fresh fruit soda businesses. I got in line at Hapa Ramen (naturally), and had a bowl of miso ramen with fresh corn and string beans. It was pretty good. Afterward, I scoped out the marketplace inside the terminal, and found more things that reminded me a little of Brooklyn: small artisanal foods and crafts. After tasting some sweet samples, I snatched the last jar of a strawberry lavender jam from Happy Girl Kitchen Co., for my happy jam girl back home.

In the Mission District, there were some real visions of back home, too — Bi-Rite grocery stocks McClure’s Pickles (oh, the days), and I saw Mast Bros. chocolates somewhere, too. But for every Brooklyn artisanal craft, there were more than a dozen local favorites in the same vein. And that’s what I’m all about getting to know while I’m here. 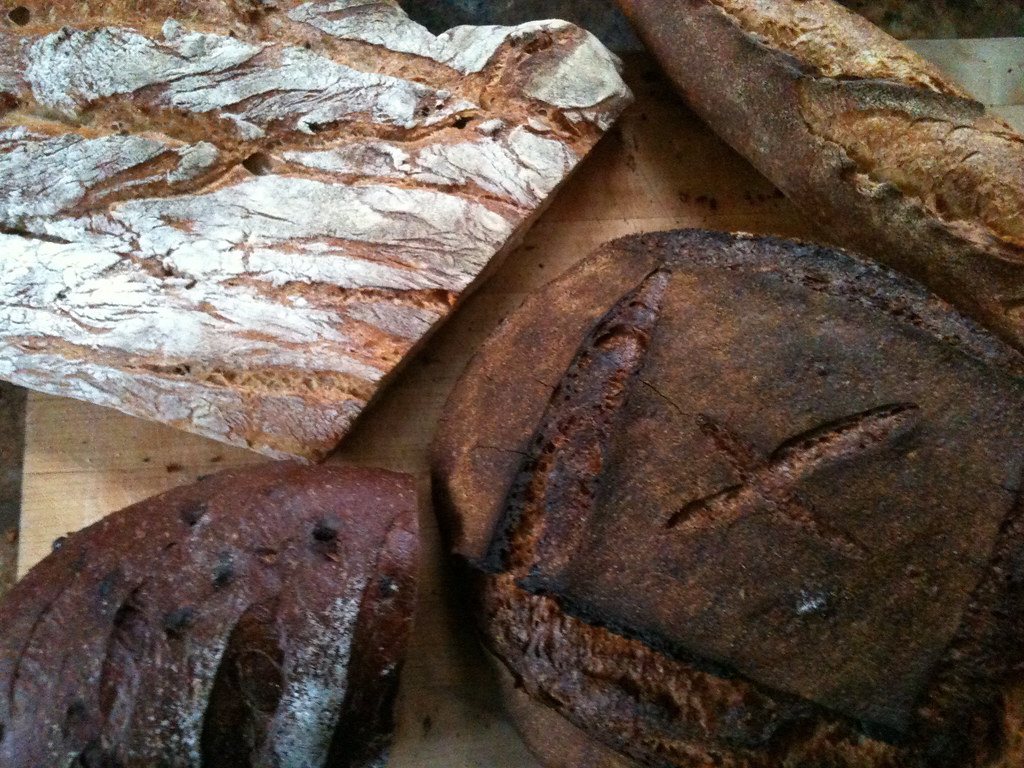 That, and more about bread. I’ll get into that more in depth soon. But for now, let me this is what the counter of the house I’m currently crashing at generally looks like. One of the roommates is the photographer of the Tartine Bread book (and former baker there), and another roommate teaches advanced breads at the San Francisco Baking Institute. So the kitchen is littered with bagfuls and bagfuls of these rustic batards, baguettes, bread studded with candied hazelnuts, and some wonderful chocolate loaves which are addictive at midnight. 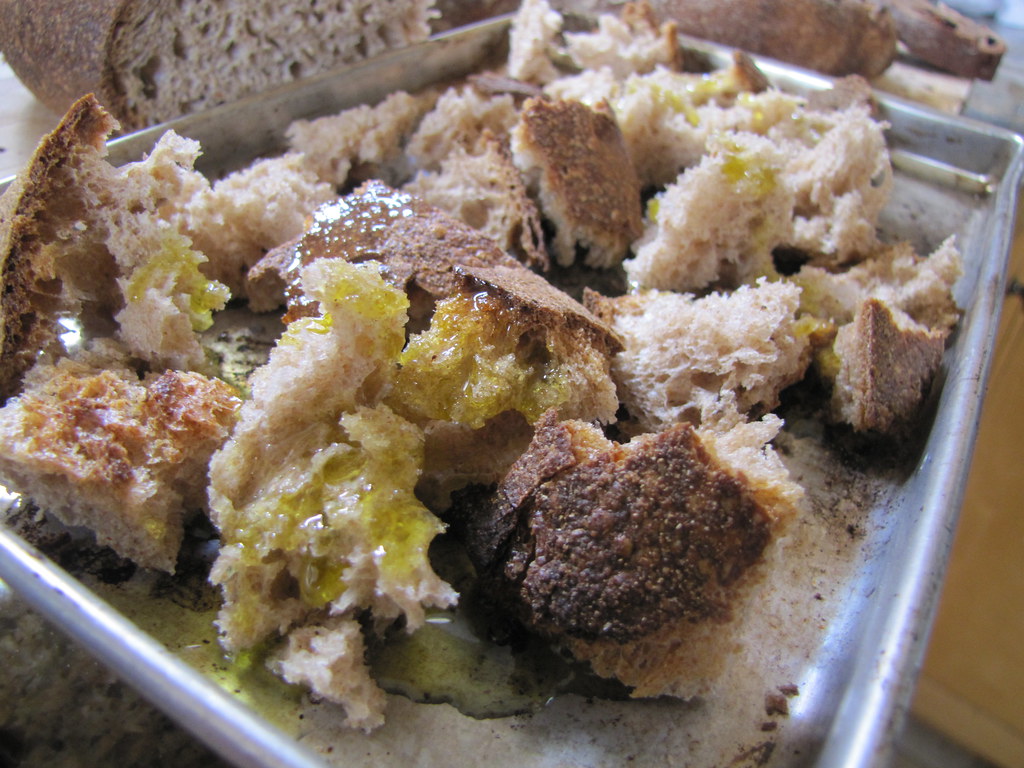 So, a panzanella. With some of the juiciest tomatoes from the market, sweet spring onions, that rice paddy herb (instead of basil), and artichoke hearts. I began by ripping up a chunk of the batard into bite-size pieces, and baking them just until crisp with a coat of olive oil.

Panzanella is a leftover dish for stale bread that’s kind of like crostini, only not assembled. You can toss in any chopped fresh ingredients to create a salad with hearty chunks of bread. I think the key is to tie it all together with generous glugs of olive oil and a spritz of red wine vinegar, for extra tang. 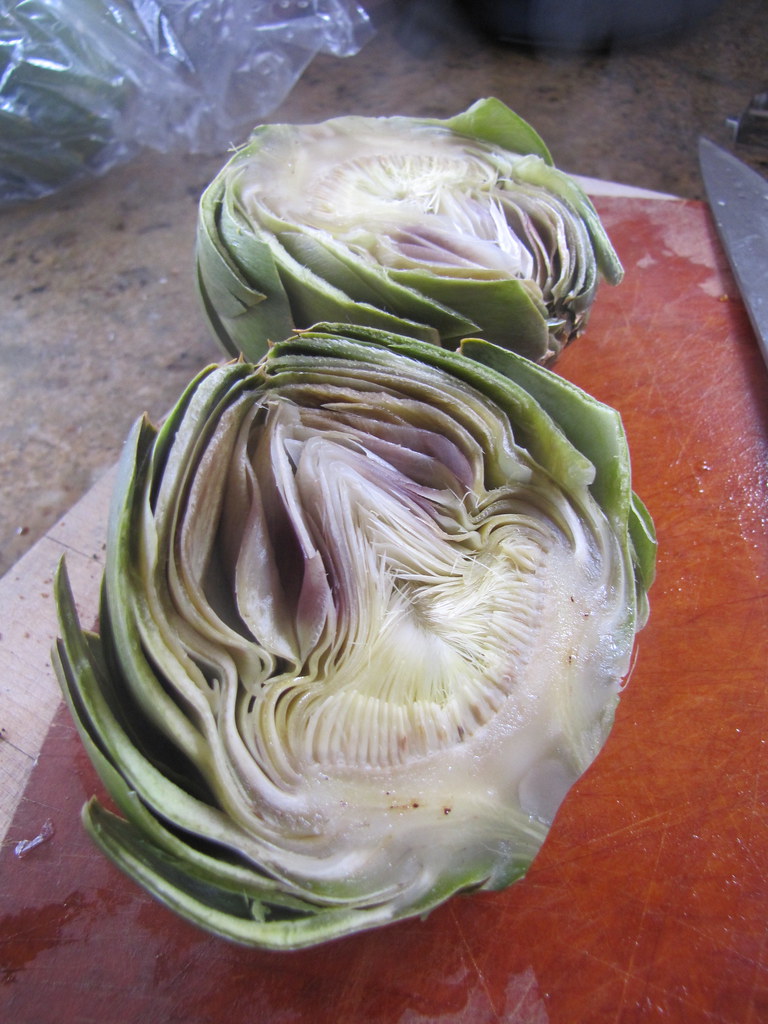 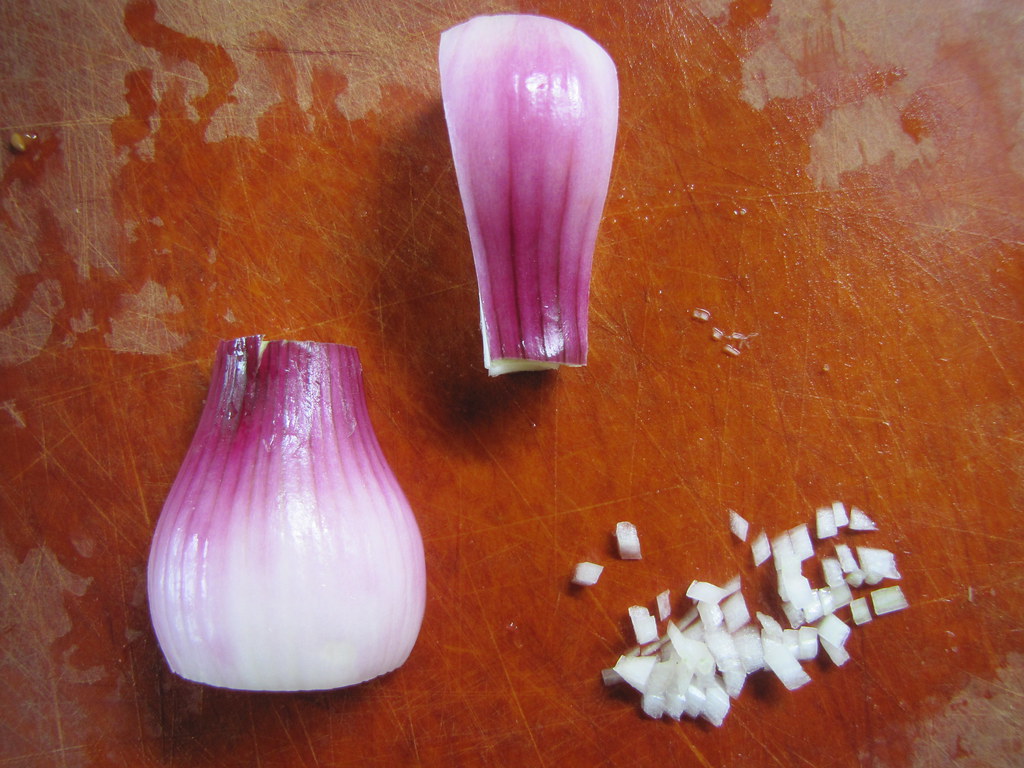 Artichokes can be tricky to deal with fresh. I took the quick route of steaming them until tender and ripping off the thick, fibrous leaves to get to the succulent core. It’s well worth the effort for its wonderful flavor, especially if you’ve only had artichoke hearts from a jar. Be sure to get rid of all the spiky hairs just above the heart, if it’s a more mature choke (baby ones are much easier, on the other hand), and scrape all the tender flesh away from the unusable leaves with the back of your teeth while you’re working to salvage some of the good stuff. 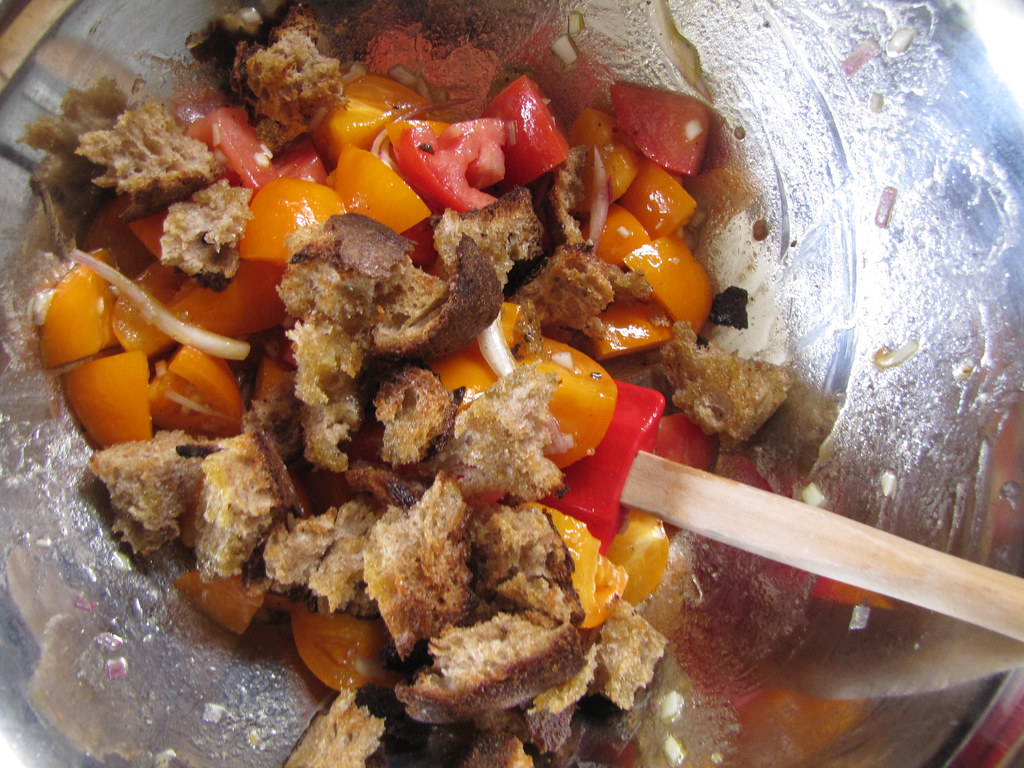 A fun dish to make for a group, and an easy snack or light meal. The best part about what could easily be a comforting, familiar dish is the surprising taste of the rice paddy herb. If you don’t have any handy, try tarragon or another herb that’s rarely used in your kitchen instead.

Preheat oven to 300 degrees. Tear bread into bite-size pieces and toss with about 1 tablespoon olive oil and a pinch of salt and pepper. Spread onto a baking sheet and toast for 3-5 minutes, just until crisp. Let cool.

Meanwhile, trim the stems from the artichokes and steam for 5-7 minutes (depending on the size of the chokes). Check to see if the inside is tender by halving one. The core should be olive-green, rather than whitish when cooked. Let cool a few minutes and remove two or three layers of the outer leaves. Cut into half lengthwise and cut off about half of the top of the choke, including any wispy, spiky parts inside. Continue to remove leaves, tasting as you go, until the bottoms of the leaves are perfectly edible and clip any tough parts of the leaves off. Chop artichoke hearts.

Combine the tomatoes, artichoke hearts, onions, red wine vinegar, and pinches of salt and pepper in a large bowl. Fold in the bread pieces, add the remaining two tablespoons of olive oil, and toss well. Taste for seasoning, and add the herbs. Serve immediately at room temperature or after sitting 5-10 minutes to let the bread soak in more juices.