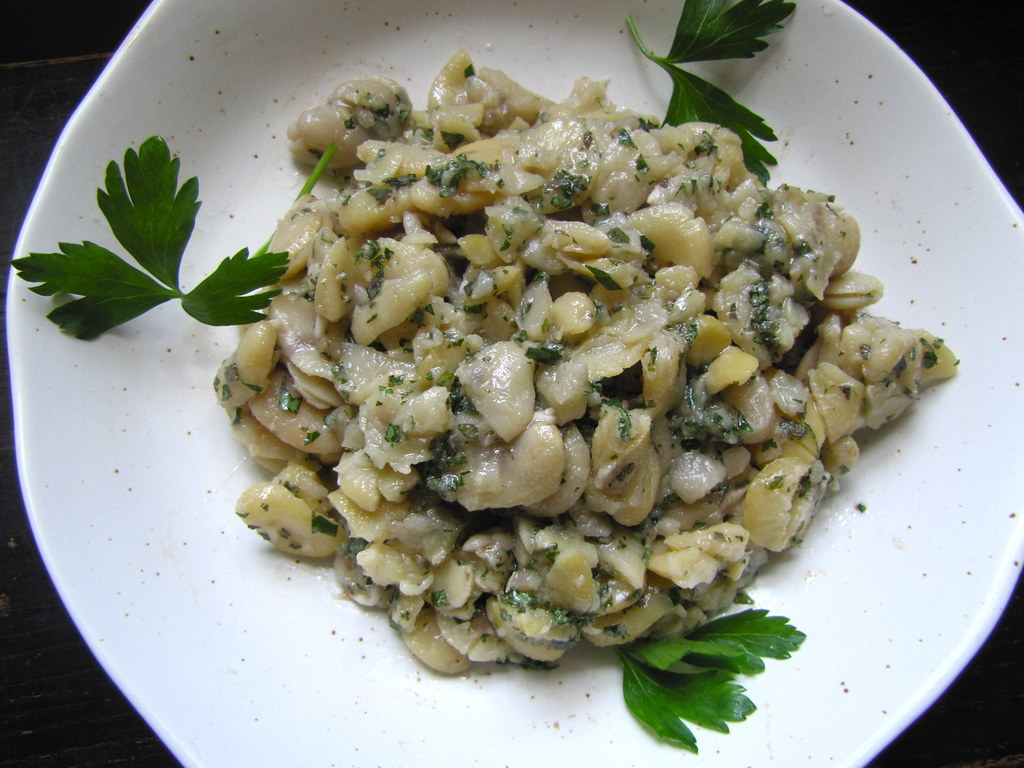 I’ve been eating in the style of mezze a lot lately — a small pile of sauteed snap peas here, some roasted beets there, etc. So many vegetables are suddenly in season, and piling up thanks to my CSA share, that preparing them all in some congruous fashion can get taxing — and somewhat self-defeating, as most are so good on their own. So rather than plopping a big, messy pile in front of me, I like to scatter a personal potluck on the table, of delicious but simple things. Well, here’s one addition that will bring protein to the party, and is easy to keep on hand.


That is the essence of mezze — a Mediterranean style of eating various small plates, served with bread to scoop up, usually. It’s similar to the various small plates of dim sum, or tapas, except the latter two I tend to think of as very elaborately prepared, specialty food items, like shumai, rather than more straightforward courses comprised of few ingredients, like an eggplant spread. 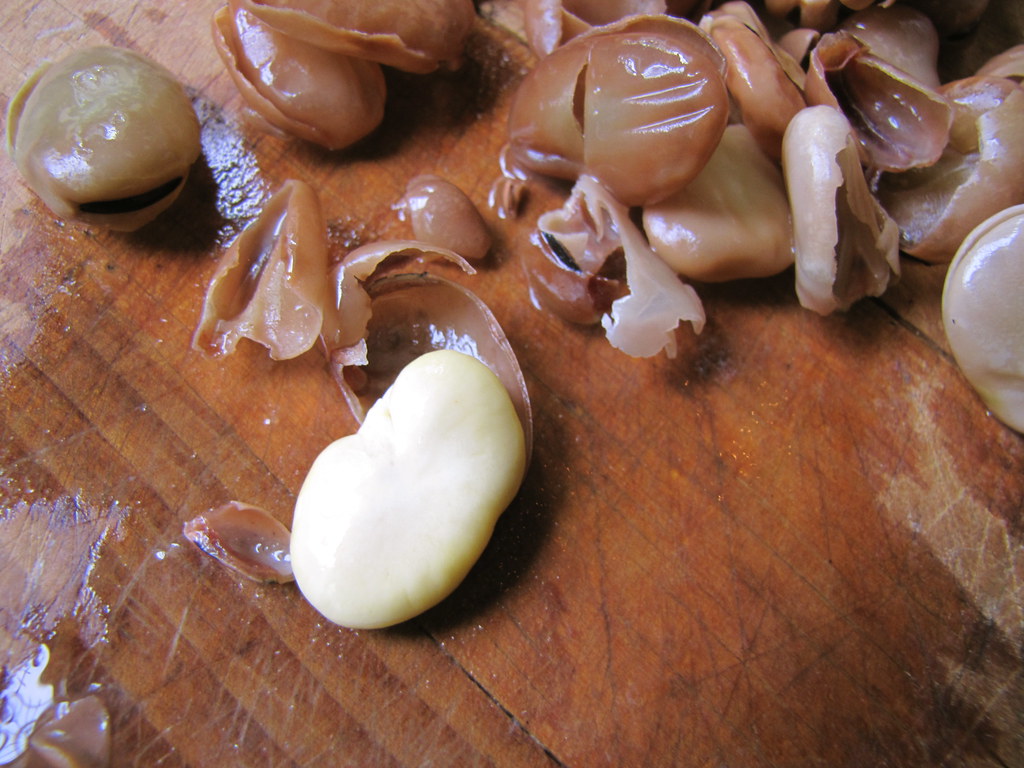 So, I’ve been keeping soaked and cooked beans ready to bring out and serve with anything seeped in their flavorful herb and olive oil coat. Sometimes, it’s just thrown on top of a pile of leafy greens and gobbled up as a salad. Other times, a poached egg is gently slid on top of the beans. (Sometimes, both are employed.) It can go on top of rice, quinoa, polenta, and you-name-it grain, and it goes inside a wrap with them, too, becoming a burrito of sorts. If you absolutely can’t use the beans up in any of those ways and more (like just with melted cheese), you can always throw them into a hearty bean soup, or chili. Or blend them up into a savory bean dip.

I’m speaking of beans generally here, but have come across a few favorite types where I think they shine best on their own. Fresh fava beans, when you can get your hands on them, are ultimate in this category. But I across a package of dried fava beans in the cupboard instead; they don’t have the sweet, spring green-ness of the fresh version but they’re mild and satisfying to bite on with their size, and less mealy than most types of dried beans, too. 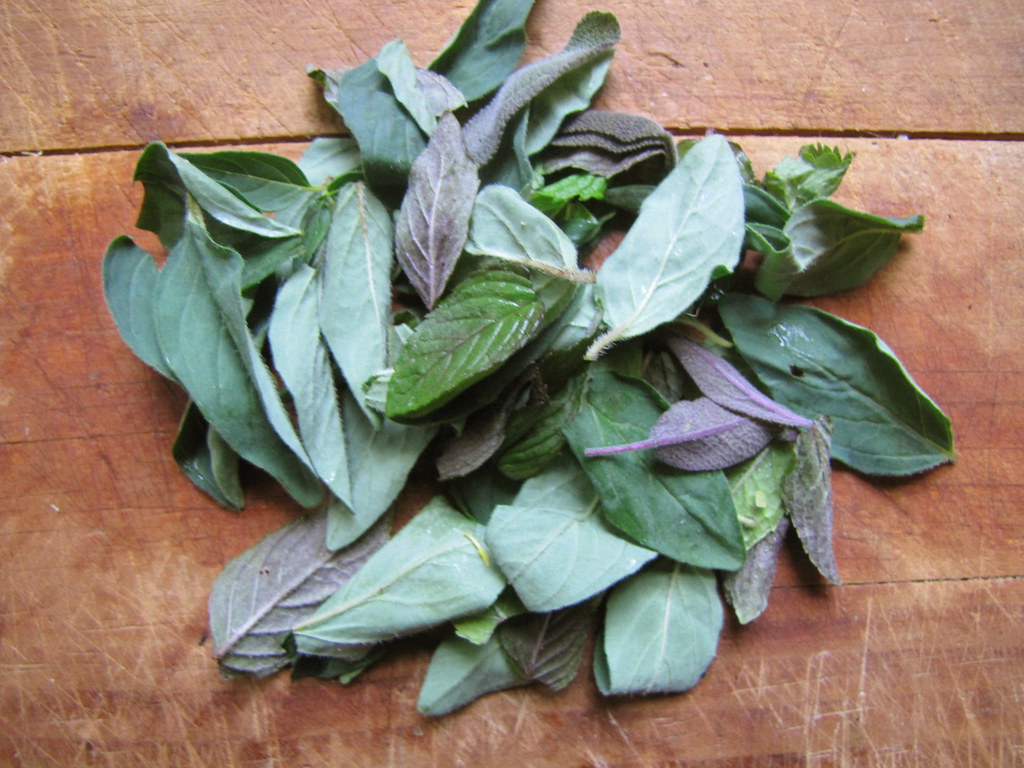 a handful of mint, basil, parsley and purple sage, from the roof

Both fresh and dried fava beans will have a thick outer skin, once you remove them from the pod. It’s not terribly distracting when the beans are fresh, but the dried fava beans could shed the extra layer, so much tougher it is. Fortunately, they slip right off the pale, ivory-colored beans after an overnight soak in water. 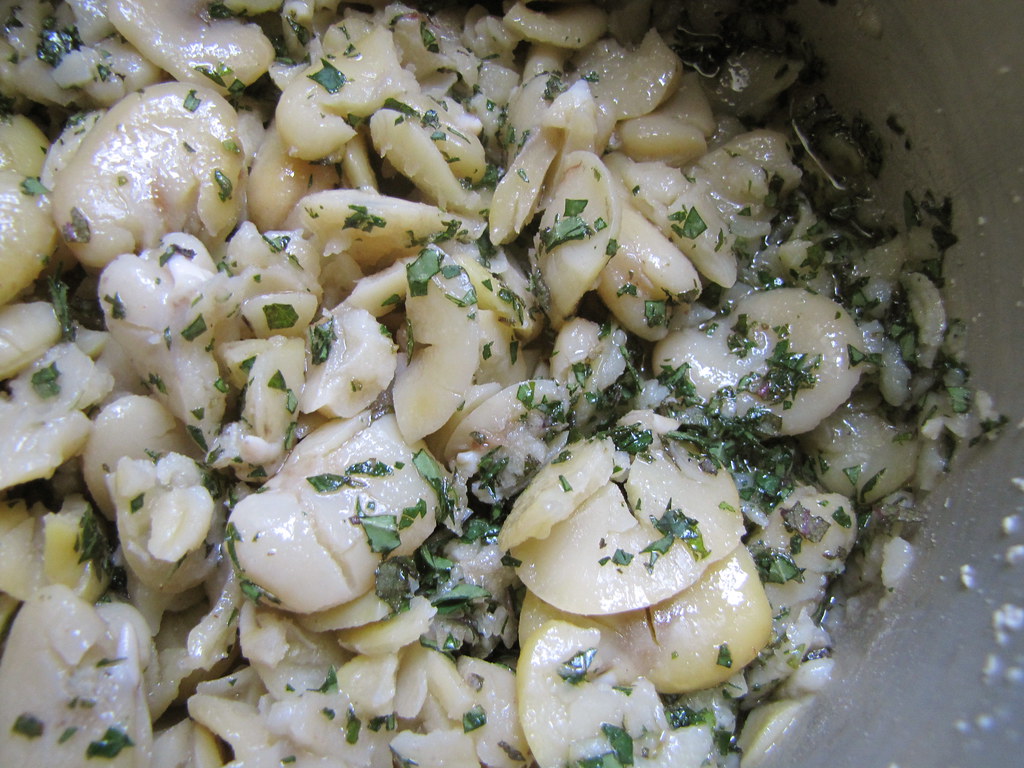 the mixture glistens with a good coat of olive oil

For a very basic bean salad, I’ve added only chopped herbs, garlic, olive oil and salt. A squirt of lemon goes a long way, and can be added each time it’s served (so as to be more fresh). If you’re a fan of more flavor, toast some cumin seeds or sprinkle them with cayenne. The best thing about having a stash of these seasoned beans on hand is that you’re less likely to look elsewhere — and in less healthy places — for protein.

3 cups dried or fresh fava beans, removed from their pods
1-2 tablespoons chopped fresh parsley, thyme, chives, tarragon, mint, and/or any fresh herbs of your choice, chopped
1 large clove garlic, minced and pressed firmly with the side of the knife while scraping back and forth to mash into a paste
3-4 tablespoons extra-virgin olive oil
sea salt to taste
fresh lemon juice to taste

If using dried fava beans, soak overnight in at least 3 inches cold water to cover. Drain. Slip the tough, outer skins off of the beans. Cover with 3 inches water in a pot and bring to a boil. Reduce heat to a simmer and cook, uncovered, until tender (usually less than 1 hour but depending on how dry the beans are). Drain.

If using fresh fava beans, bring a pot of water to a boil. Add the beans (removed of their pods) and cook, boiling rapidly, for 2-3 minutes or until tender. Drain.

Two brownie points: This recipe is intended to be served with many other things, but on its own, it’s one of the most healthful ways to fill up and get your protein. In addition, fava beans (also known as “broad beans”) are also great sources of fiber, and many minerals like iron and manganese. For all that, they’re low in calories and have less carbs than other beans like, say, chickpeas.

Six maple leaves: Although my dried fava beans weren’t from a farm in the region that I can tell (it was a generic brand from a supermarket), dried beans are no less one of the least impactful ingredients to eat — and they don’t require refrigeration or quick transportation before they go bad.