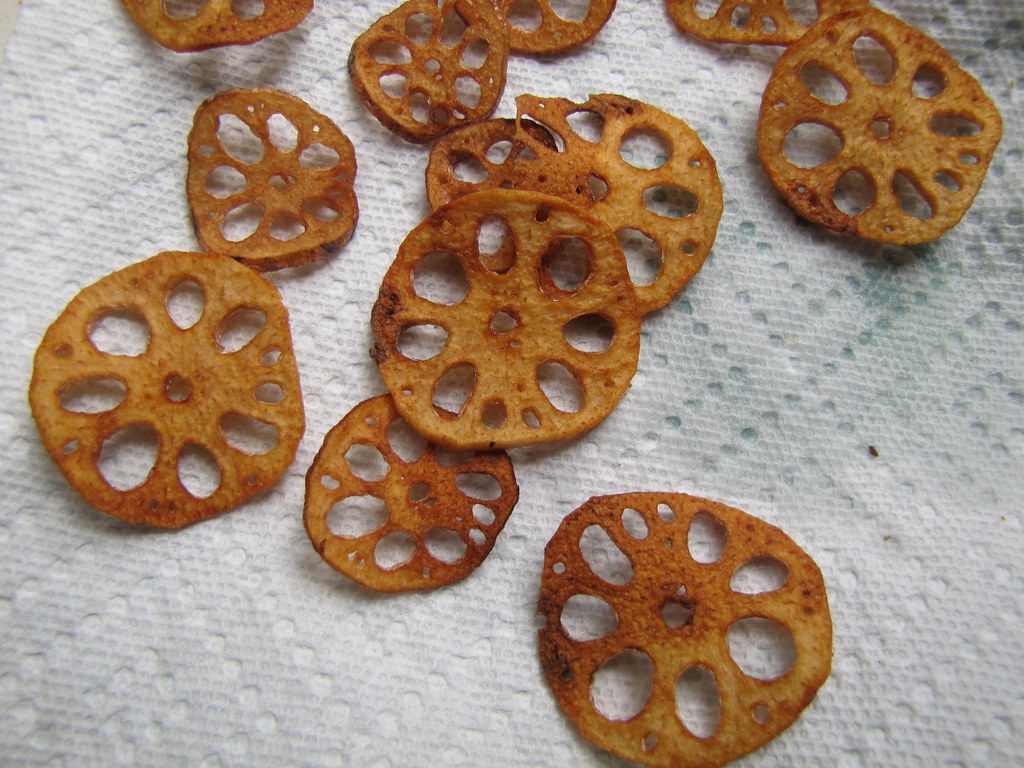 Presenting just one way of using this vastly versatile plant. The root of most plants are usually not the most attractive part, especially when there’s flowers on top. But sliced up, the lotus root — or the plant’s rhizome — have a unique appearance that catches the eye, as well as a crunchy texture and mild taste that lends itself well to many applications. Such as deep-frying in the manner of potato chips.


It’s certainly one of the more whimsical uses of lotus, whose flowers are a religious symbol and a yoga position. The leaves of lotus are often used to wrap bundles of rice, imparting an earthy flavor when steamed together, or added to teas. And the stem of the plant can be found in floral arrangements, cut with a nub of the root and dried so that its lacy holes are fixed solid in time. 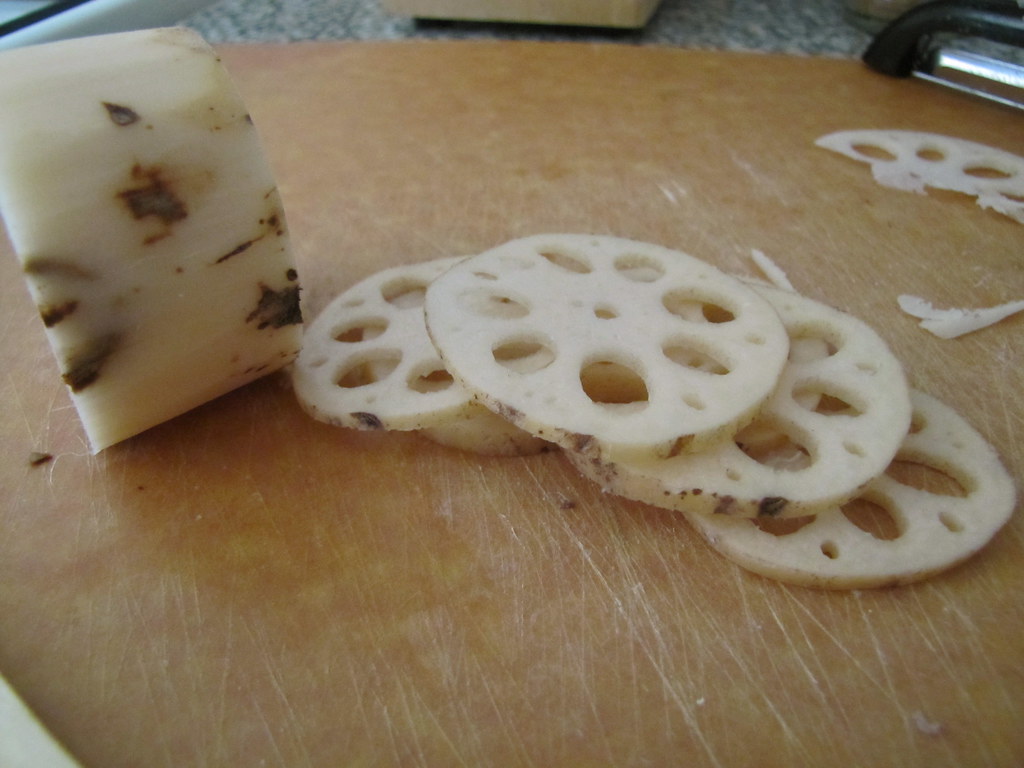 a sliced and peeled specimen

Lotus roots don’t look like much from the outside, resembling long turnips, radishes or other tubers. But when sliced into discs — and I don’t know of too many cooking applications that don’t take advantage of this form — the root’s hollowed interior adds real charm. Lotus roots grow underwater, while its stems grow and bloom flowers above the surface. Hence, the flesh of lotus roots have a crisp, watery texture, if unpalatably fibrous when raw. It actually shares more similarities with another aquatic rhizome with an indestructibly crunchy texture, water chestnut, than potatoes. (Water chestnuts are not really nuts at all.)

I’ve cooked lotus root slices into roasted root vegetable medleys, or braised them with soy sauce until stained pink-brown. But for a dinner in which the main course was a trio of sliders inside steamed buns, a side of lotus root fries, or chips, seemed the perfect fit. Would these slices fry more or less like potatoes or other root vegetables? More or less, they did. 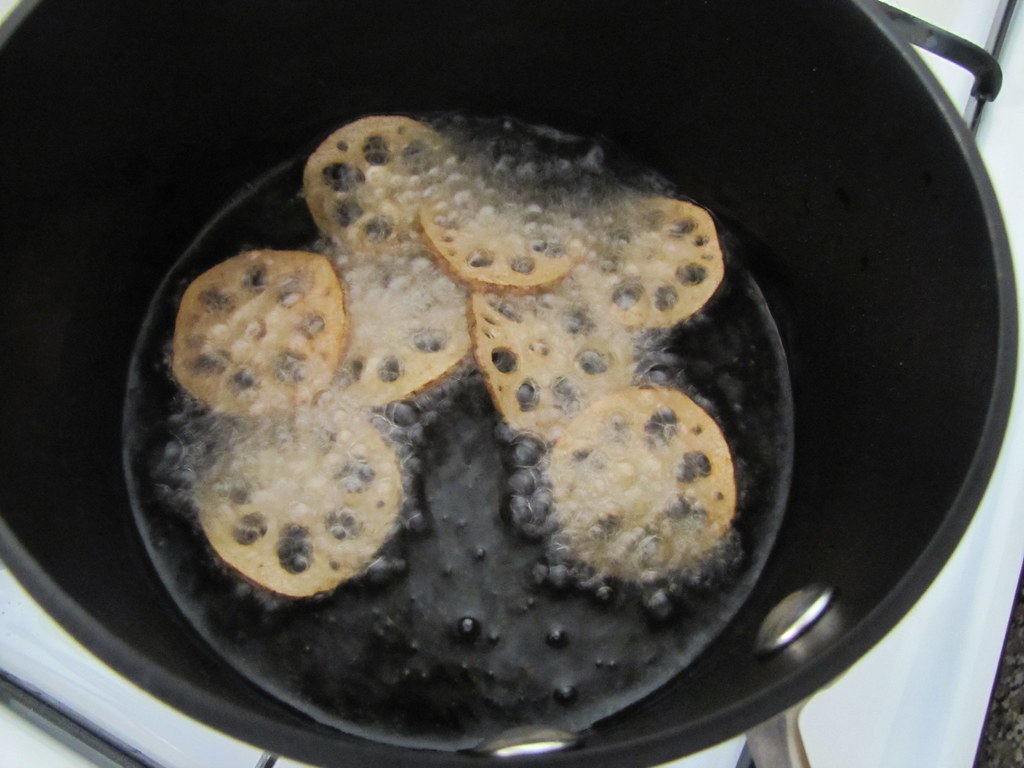 I tried peeling the thin, outer skin from the lotus roots first, and then tried a few rings with the peel still on. In the end, I favored keeping the peel, since it’s so thin you barely notice it, except for a darkened edge around the chip just like an unpeeled potato would lend. I brought a pot of canola oil to 350 degrees and let the chips bubble in them for half a minute or so. Out they came, crisp, golden and surprisingly savory, just like potato crisps.

For the steamed-bun slider dinner, which was served last Wednesday at Milk Bar, these lotus root chips were sliced extra-thin and given a dusting of homemade furikake, a typical Japanese seasoning mix with bits of nori seaweed. It was delicious, although I don’t have photos to show.

Lotus roots are an exotic vegetable, to be sure, which grows only in warm water. So healthfulness and locality/seasonality have been pushed to the wayside in the name of fun and experimentation for this recipe. So if you come across these crazy roots in Chinatown — while checking out another Asian produce that’s getting much attention as of late — be assured you can make at least one greasy, American deep-fried pleasure with them.

2 lotus roots, sliced thinly with the peel on
at least 4 cups canola or vegetable oil, or enough to submerge
salt or furikake, for seasoning

Heat oil in a large pot until a thermometer inserted in just the liquid (not against the side of the pot) reads 350 degrees. Prepare a tray with paper towels to transfer the lotus chips to. Add as many lotus root slices to the pot as will fit without overlapping any. Fry until golden-brown (depends on how thick they are cut), turning them over once or twice. Remove with a slotted spoon and transfer to the paper towels. Make sure the oil remains around 350 degrees as you continue, adding more batches of lotus root slices to fry. Sprinkle with salt or furikake to taste.

Seven brownie points: If you must snack on fried foods once in a while, making it from wholesome, few ingredients yourself is surely the most sensible way to go. Plus, after splattering your kitchen with oil, I’ll bet you won’t want to do it too often. This side dish may be super-greasy and deep-fried, but at least the lotus root still provide more fiber and potassium than most types of potatoes. They’re so tasty on their own, hot out of the oil, you can go easy on the salt, too.

Two maple leaves: Nothing about this recipe is local or seasonal if you’re in the Northeast, as mentioned, but neither is it particularly high-impact as it’s just plants. Save the frying oil once it’s cooled just like thrifty moms used to do, and use it the next time you decide to fry just about anything — the lotus roots shouldn’t impart much flavor to it.