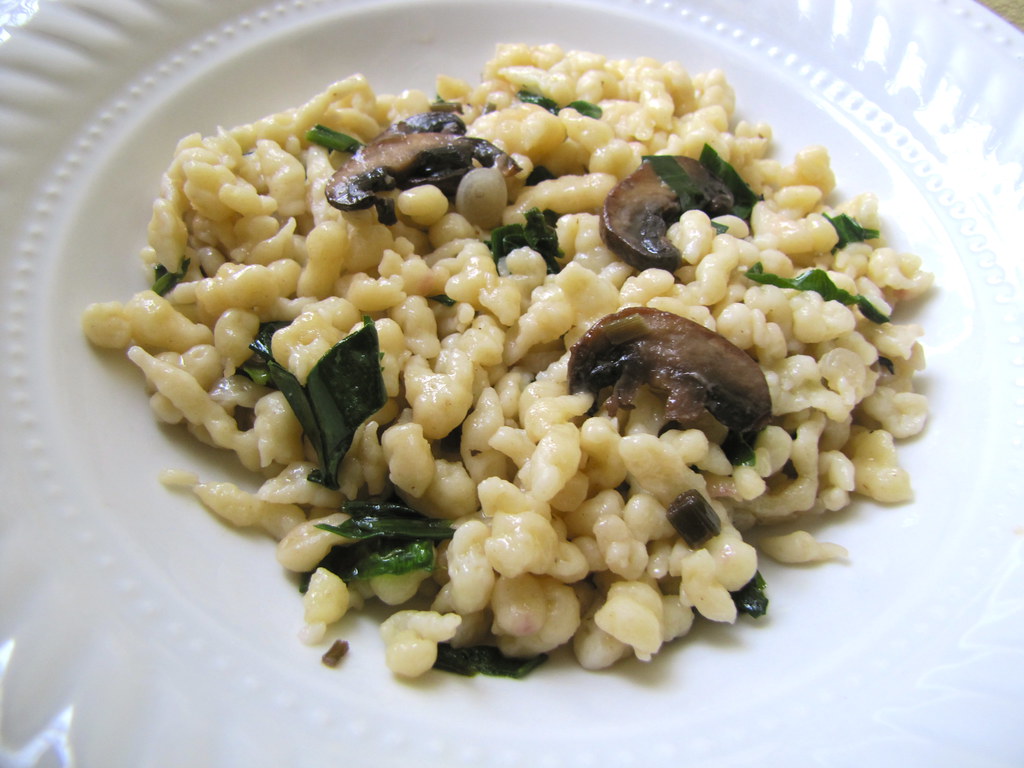 Ah, ramps, crisp and delicate. Why all the hullaballoo about you? Well, your wildness cannot be disputed, nor your rarity, only appearing for a short span of spring. You’re leafy and long, with a curvaceous shape that stands out amongst the allium family, with their stick-figure shoots. Your green-to-purple palette has a pearly sheen, and you refuse to not look elegant tossed in any heap or pile. Gosh, I hope I’m not sexualizing the plant, but just saying, maybe that’s why ramps are so played out to the point of possible over-harvest. And maybe that’s why ramps cost $16/lb and commanded the longest line I’ve ever seen at the Greenmarket this Saturday, from a small farm that mostly carries beef.


Yeah, that’s why. But not to dwell on this spring onion any more than it already has been, it made for one delicious spaetzle last night. First, the spaetzle was beaten and pushed through slats on a colander (which I’ll get into just next…). Then, crimini mushrooms were sliced up and sizzled with the sliced, oniony bulbs of the ramps in a pan with butter. The spaetzle was added, more butter and the leafy, green tops of the ramps were added. It was a light-tasting delight, perfect for spring. 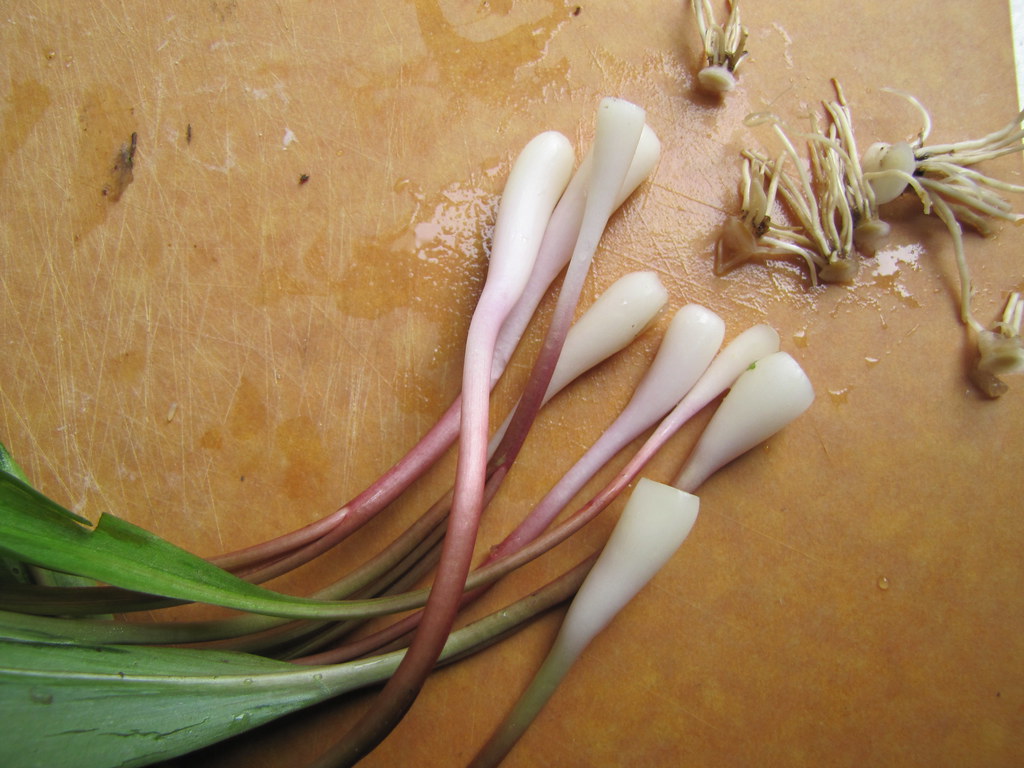 But it wasn’t quite as easy as that sounds. The spaetzle was culprit. I’ve never had much luck before in making spaetzle, the German dumplings that are more or less fresh pasta in little, misshapen squirts. I’ll blame it on a cheap, rinky-dink “spaetzle maker” I had bought that was not. This thing (which I won’t name the make of nor store bought from) cost about $12 but was worth negative twenty for the lost efforts. It looks sort of like a mandoline with a cheese-grater surface, where the dough is supposed to come through as noodles. The dough, softened from egg yolks and milk, was always just too elastic to poke through its holes, and the handle that’s supposed to scrape them through only pushed the knob of dough back and forth, till pieces fell from the ends into the boiling water in great blobs. 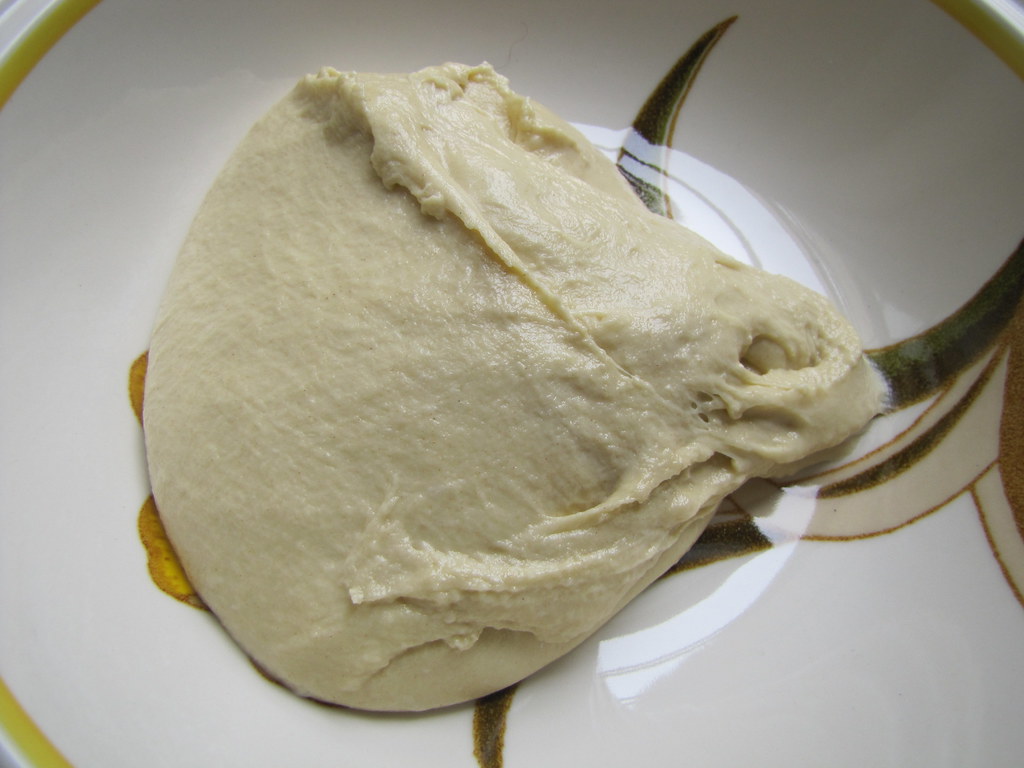 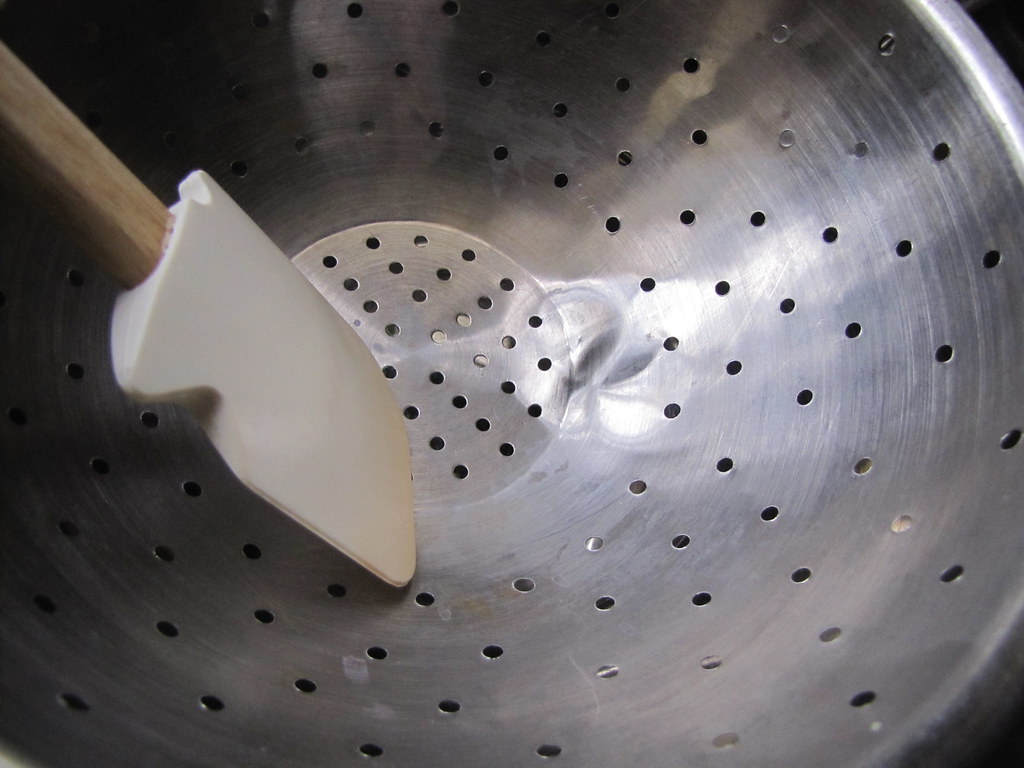 the noodles are pressed through a colander’s holes

Only until I glanced upon a recipe that called for pushing the spaetzle dough through a basic colander did I get these noodles to work. It’s not easy; you’ll have to use some elbow grease and a good spatula to get it through, but it can be done. And it’s worth the effort, in my opinion, because those misshapen squirts of dough have such a wonderfully springy texture that you just can’t get from forming it in any other way. Rustic as they may look. 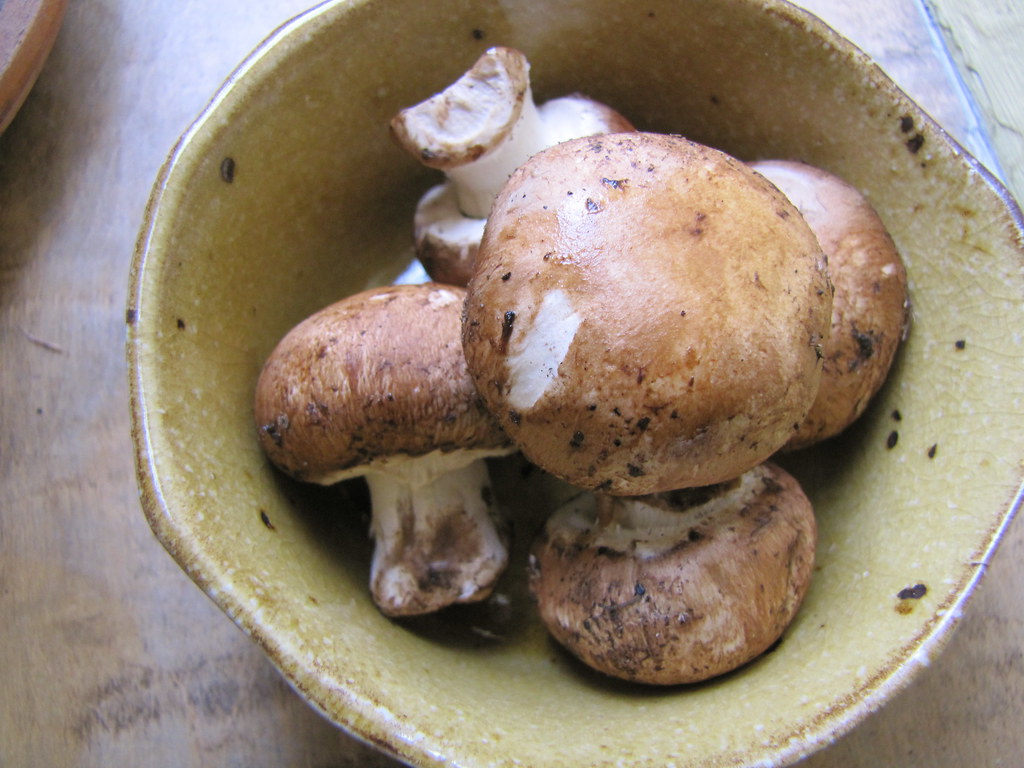 crimini mushrooms are added to the buttery dish

After successfully making this batch with a colander and spatula, I actually threw the darn tin spaetzle maker in the trash, still covered in wasted dough. Considering I hoard just about every broken spoon in the kitchen, that’s quite a serious insult.

Here’s hoping it works out for you, too.

Spaetzle with Ramps and Crimini Mushrooms
(makes about 6 servings)

Whisk the egg yolks and milk. In a large bowl, combine the flour, salt and nutmeg. Make a well in the dry ingredients and pour in the egg/milk mixture while beating. Mix until just smooth. Cover and chill for at least 30 minutes, or up to overnight.

Bring a pot of water to boil. Fix a colander on top of it and add about a cup of spaetzle dough. Quickly press the spatula against all the dough so that it goes through its holes and into the boiling water. Let boil for another minute or two since the last drops of dough fell in. Strain, and repeat for the rest of the dough until all used up. Transfer cooked spaetzle to a bowl in the meantime.

Heat a tablespoon of the butter and the chopped ramp bulbs in a large saucepan. Add the mushrooms, and season generously with pinches of salt and pepper. Cook, stirring occasionally about 4 minutes and add the spaetzle. Stir and season with salt and pepper to taste about 1 minute. Add the coarsely chopped ramp leaves, the remaining butter, lemon juice and parmesan. Stir until combined and serve immediately.

Cost Calculator
(for about 6 servings)

Five brownie points: You’re not going to find an especially “light” spaetzle, due to its cultural heritage and the fact that it incorporates so much milk and eggs in its dough. This is a dish meant to be filling and rich in its own, served with just a smear of flavor to help it down. Here, it comes in the form of spring leeks, or ramps, with verdant tops that speak to its antioxidant oomph. This dish also has mushrooms, which can be used more significantly or sparingly, and are huge in providing selenium or riboflavin (Vitamin B2) in your diet.

Nine maple leaves: It’s now or next year for ramps. That’s what I’m telling everyone who come asking for those beautiful ramps, where I’d gotten them, etc. These were fogaced on the Wilklow Family Farm, which mostly sells pasture-raised beef. The rest of the ingredients in this dish are available year-round and you could find all ingrediets on your supper run.