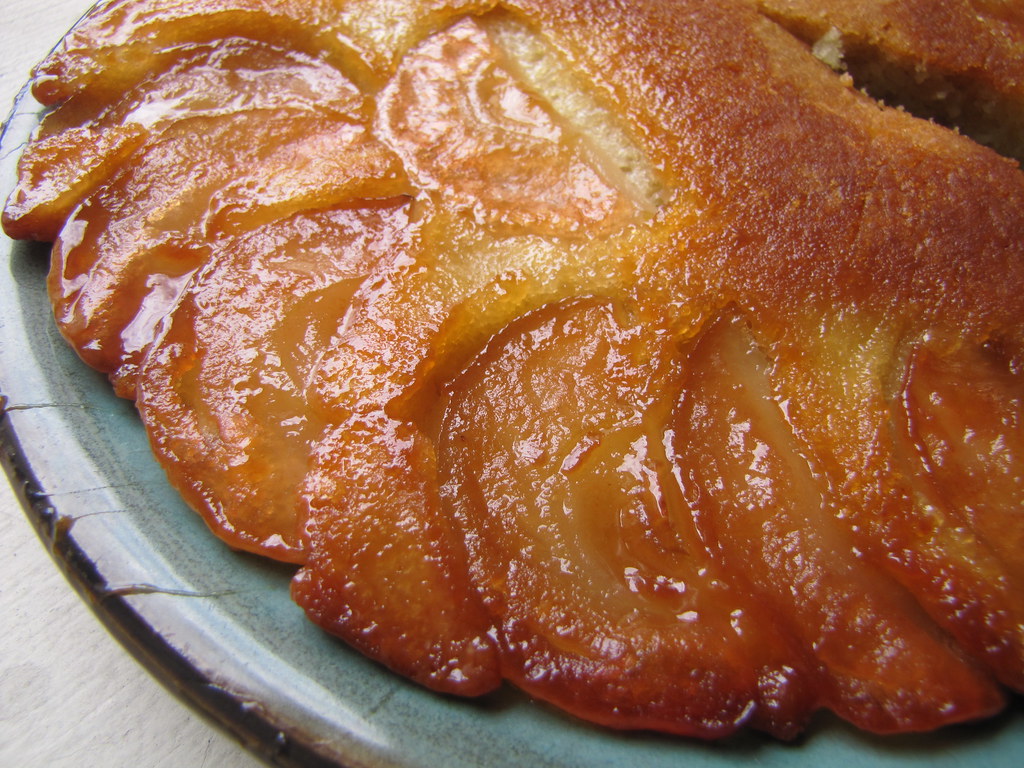 You know, I have never actually owned a cake pan. I’ve never particularly wanted to use one, either. The spring clasp makes me skeptical. And I guess I don’t see why any food should have to be such a perfect cylinder of foam. As you can probably guess, I don’t have any cake decorating gadgets, and I’ve gotten by improvising them every time I’ve taken on a cupcake task. (Is it a sign of the awesome popularity of the cupcake that I’ve never baked a cake in a proper pan?) But if you’re wary of crowding your cupboards with stuff you barely use, too, here’s one way to multi-task your cookware, without sacrificing taste. This upside-down cake takes about 35 minutes to make, and you can do it all in an oven-safe skillet.


Upside-down cakes are a marvelous conceit. A tradition from the South, popularized in the 1950s and 60s (often with pineapple and marachino cherries), it can vary in cake batters and fruits, too. Just so long as it’s upside-down, and to keep that fruit from sticking to the (then-) bottom of the pan, it should be buttered well. A caramel sauce naturally forms when you apply the right amount of heat, and sugars. And with all that butter soaking into the rest of the cake as it cooks, it comes out dense, moist and golden. It’s really the best cake, if you ask me. Frosting, begone! 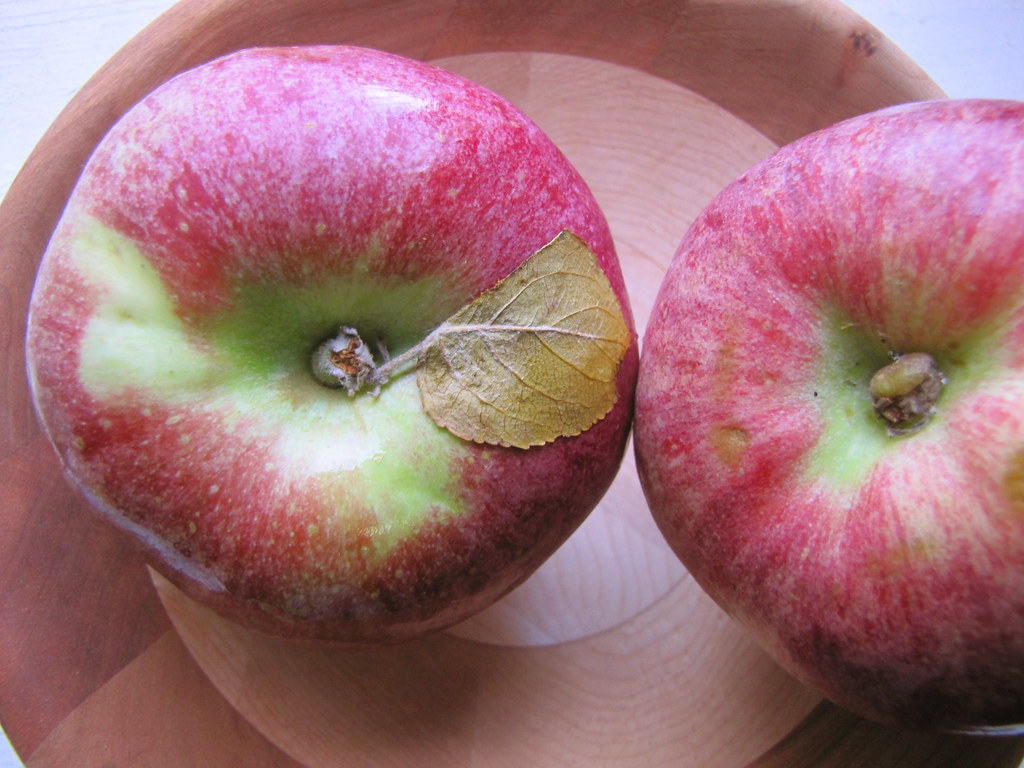 To make a gooey apple top (or bottom? This is going to get confusing) I started with some fresh-off-the-branch Macoun apples from Red Jacket Orchards. I’m a fan of this type of apples, because it’s just what I want to crunch into raw, with its tight, delicate skin that pops just so when you do, and juicy, clean flesh almost as crisp as an Asian pear. But it’s tart and meaty enough to cook nicely, too. Northern Spy is another New York State apple that’s great like this, too.

One plump apple is just what you’ll need for the bottom of this cake. Once peeled and sliced, I tossed my apples in sugar and cinnamon raw first. Almost half a stick of butter went down in a roughly 8-inch pan, and when it began to foam, the slices were arranged in a fan. 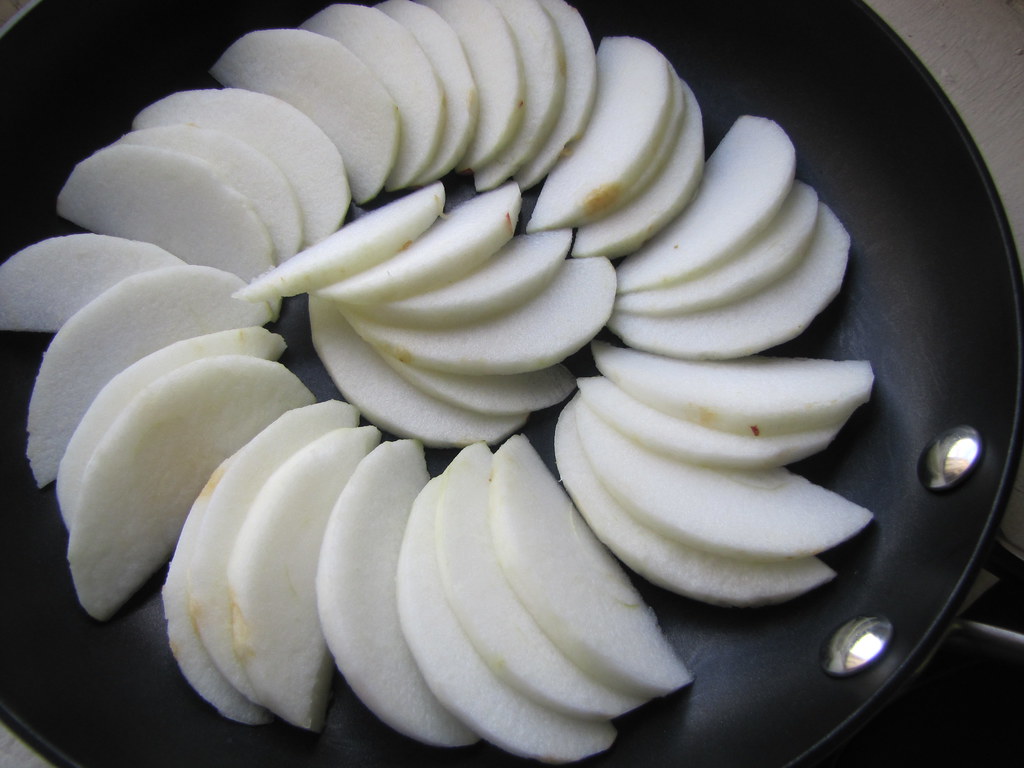 apples are arranged in a fan

You’re probably wondering what type of pan to use for this now. Definitely oven-safe to at least 400 degrees is key. You could even use a cast-iron pan, popular back in the day for baking cornbread in. But if you have a non-Teflon, PFOA-free fry pan that’s at least one inch deep, the cake will slide right out of it like a frittata in grease.

The process is kind of like making a frittata: cook the apple slices in hot butter, until they’re sizzling with juices and apple pie smells. Then pour the cake batter over them, and don’t touch again. Transfer this all to the oven immediately, to bake through with convection heat. Once a toothpick comes out clean from the center, cake’s done.

No one even knew it was baked in a fry pan.

Cream the butter, vanilla and softened sugar. Beat in the egg until mixture is fluffy and lighter in color. Combine the flour, baking powder and salt in a separate bowl. Gradually add to the creamed mixture, alternating with splashes of the milk, until all is incorporated and well-mixed.

Preheat oven to 375F. Toss the peeled and sliced apples in the 1/4 cup sugar and cinnamon. Melt the 4 Tb of not softened butter in an 8-inch fry pan. Once it begins to foam, place down the apples in a fan formation (or just place down however you wish). Don’t stir, and let cook on medium-high heat for 1-2 minutes. Slowly pour the cake batter over the apple mixture, evenly pouring around the edges rather than the center all at once (so as not to disturb the fan pattern). Transfer pan to the oven and bake until a toothpick inserted into the center of the cake comes out clean, about 25 minutes. Remove with hot mitts. Place a large serving plate upside-down on top of the fry pan and flip. The cake should come out onto the plate upside-down.

Cost Calculator
(for one 8-inch cake, or about 8 servings)

Eight brownie points: This is a rich, buttery dessert, and one apple divided among eight servings can’t make up for that. At least you can give yourself credit for making it from scratch, from all-natural and pure ingredients, rather than getting your sticky, gooey sweets fix from mysterious sources, like bottles of “caramel sauce.”

Seven maple leaves: This is a fall recipe that uses one of my favorite arrivals of the season, apples, but it can easily be adapted to incorporate fresh fruit of any time of the year. Peaches would be tremendous, cherries, too. Whatever your local farmers have plenty of, this would be a tasty use. The rest of the ingredients in this recipe can be easily found from dependable, sustainable-minded sources, too, like the butter, milk, egg and flour.